Today we’ll look to the Qs for some guidance. The first group was culled from sorting APT on rank ascending; then we switch to the biggest moves rising by sorting on APT WoW descending; finally, we look at some trades that have moved out of favor by sorting on WoW ascending.

A few of these may be redundant, but Qs don’t move as quickly as the monthlies, or usually don’t, so a Q position should be held longer, but as fundies change, maybe our outlook will drive a different perspective. 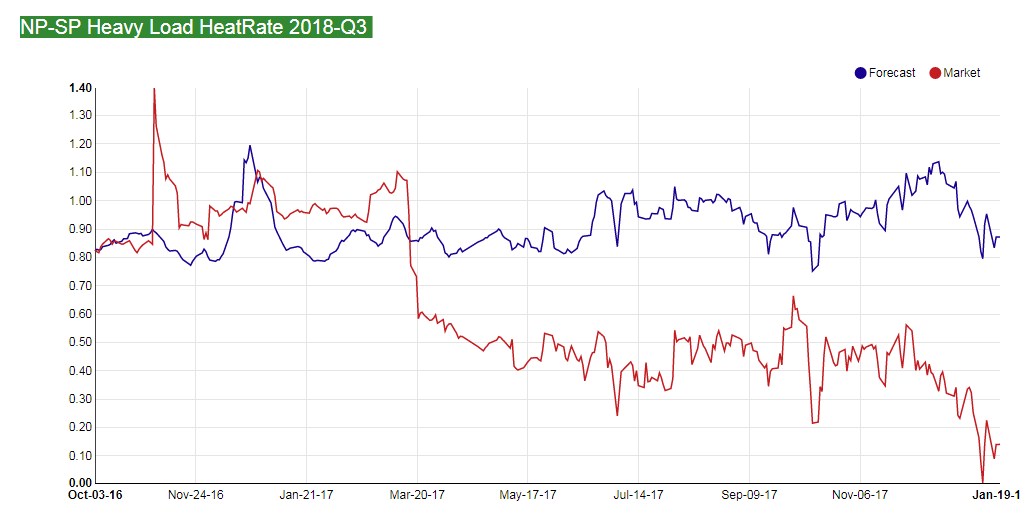 The North|South spread inside the ISO is on a death spiral downwards for Q3, but we aren’t so sure that is the right direction given a very dry water year inside the state. We are still seeing ISO hydro energy dropping, even amidst the winter storms. At some point, the state will knee-jerk back to conserving water for growing cotton and NP will feel the biggest hit. Despite the slight rally off of the lows, we’d buy it. 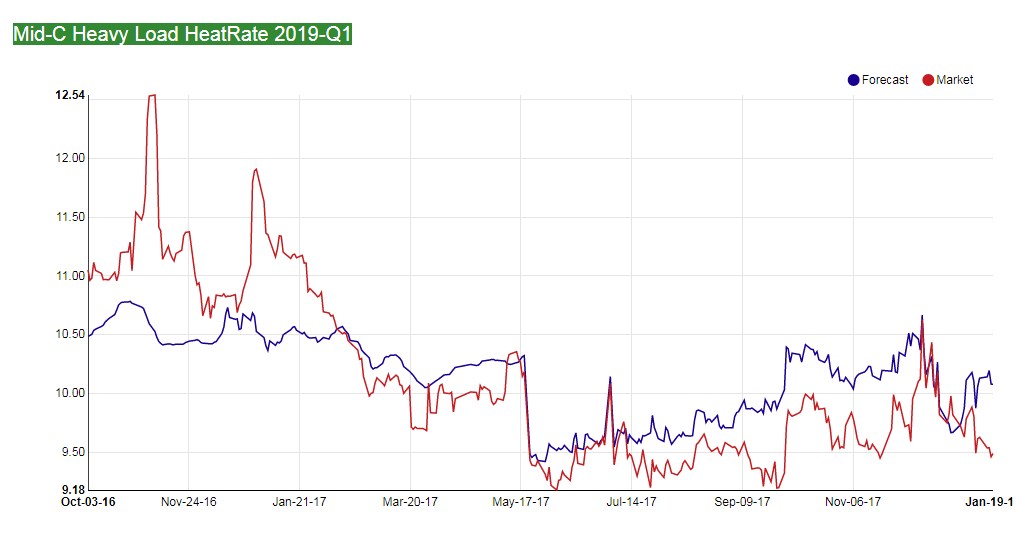 There isn’t much volatility in the Mid-C Q1 HL, but it remains cheap. The problem with this strip is the weak 2018 cash; with only current markets as a guide for next year, it is easy to understand why this is being sold down. However, a tight March, or perhaps a late cold snap in Feb, will change the tune. We think the former is more likely than the latter but would still own this at some point the MIdC rallies; when that happens, everything goes up. 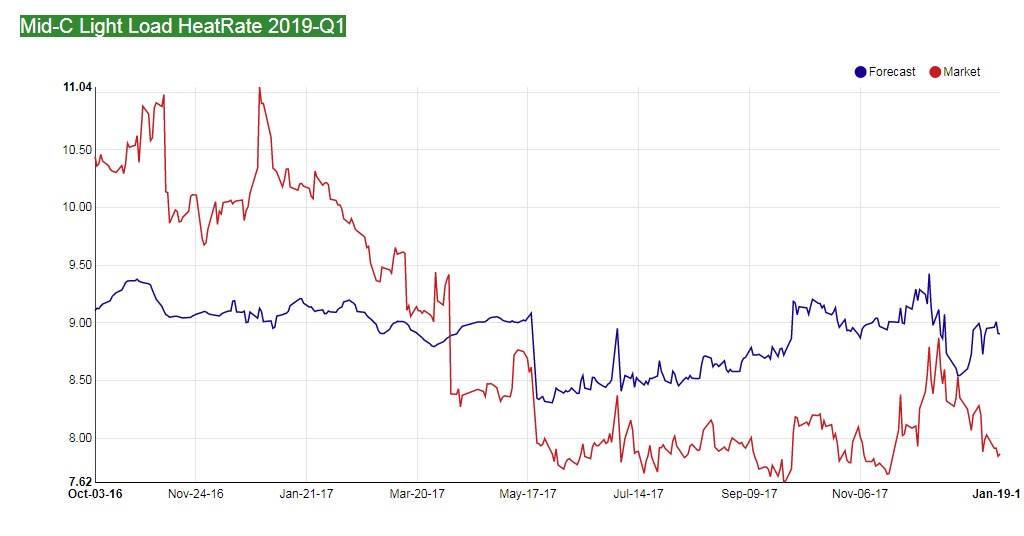 Same trade, just the LL version; same sentiment, except the LL is even cheaper. 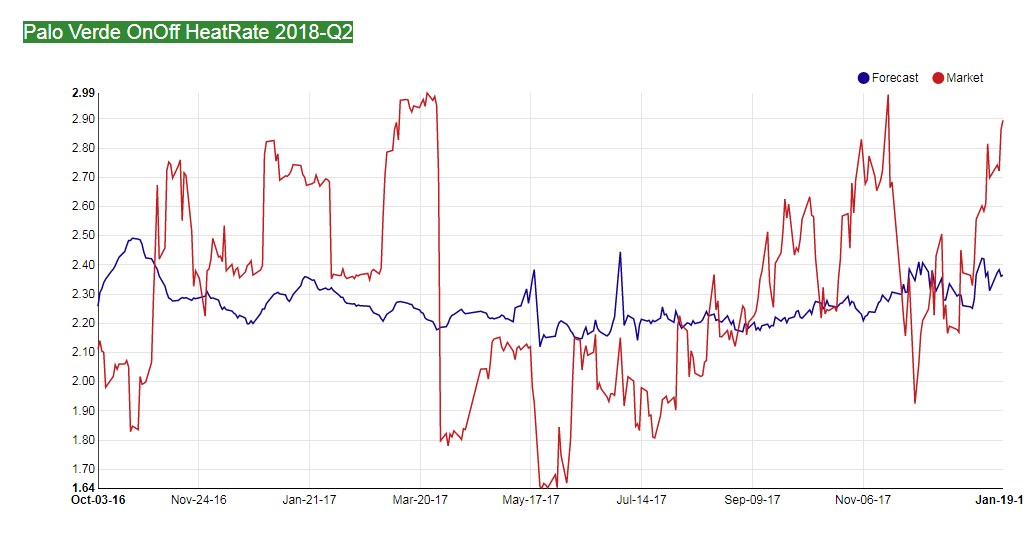 These on|offs can be wild, this one is, the PV Q2; now it approaches contract high; last time it dared such a move it cratered 1000 btus.  Of course, selling this is shorting the call, and that can be a career-ending move; still, it is worth watching. 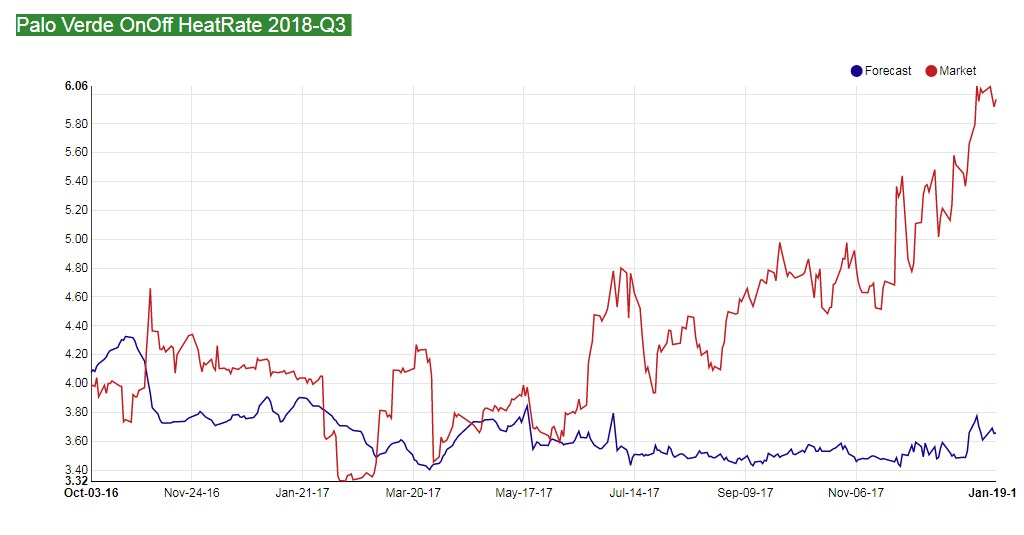 The Q3 did hit its contract high this week, and now has paused. To get paid, you’ll need to see some tight on|off cash settles, and that may come with the Phoenix cold weather this weekend. Though you’re short the call, these prices are compelling from the short-side. 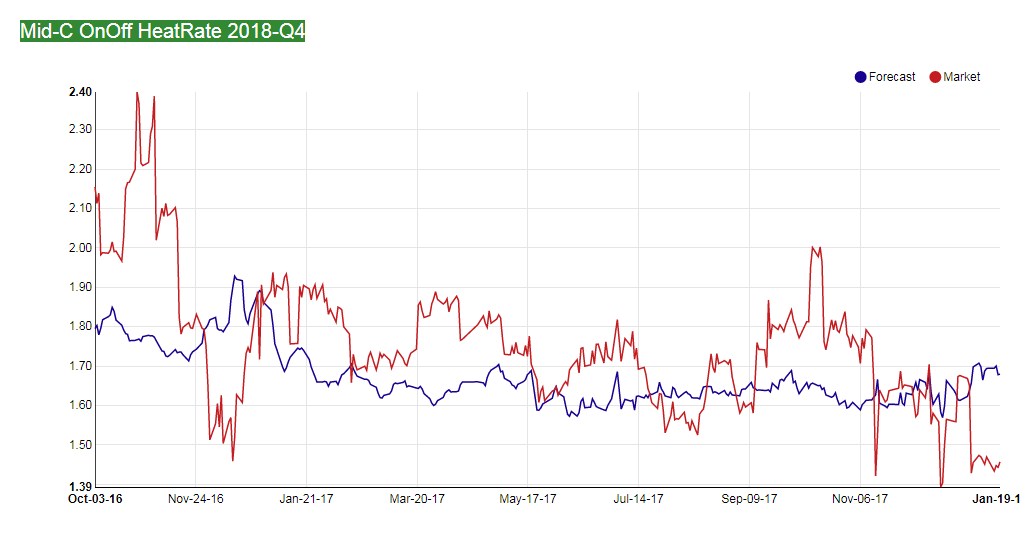 The Mid-C Q4 on|off is bouncing off the lows; this is cheap. With the DC extended a week or two, it would seem to us that the spread should go the other direction and we’d buy it today. 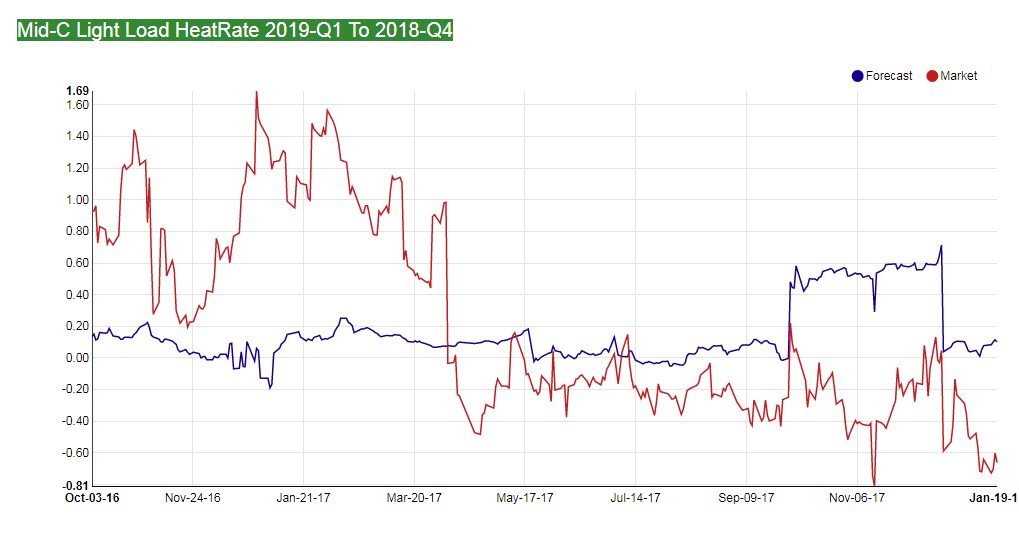 The Q1 to Q4 LL roll is also cheap; perhaps reflective of the weak cash of late. Can cash get any cheaper? Maybe, but we doubt it, not with the hub seeing 10-20 degree warm anomalies last week; if anything it should grow tighter unless the region starts seeing significant rain, we don’t see that yet and would own this. 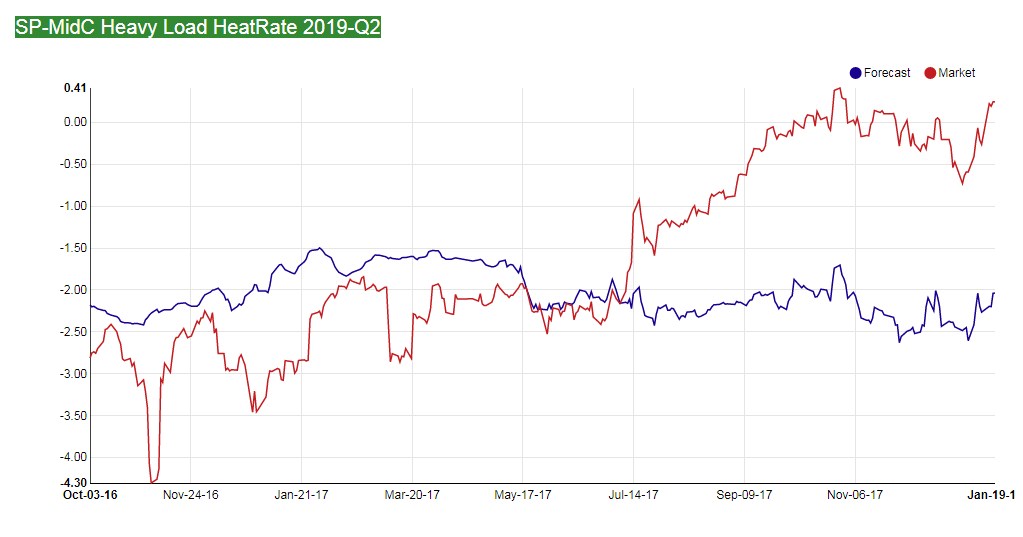 A year away from delivery, but the spread is rich. All it will take are some strong cash days to crush this, but we don’t see any of that coming shortly. Probably better places to invest VaR, still it is near its high.

The next batch of trades was pulled from the most prominent moves (APT sort on WoW descending). 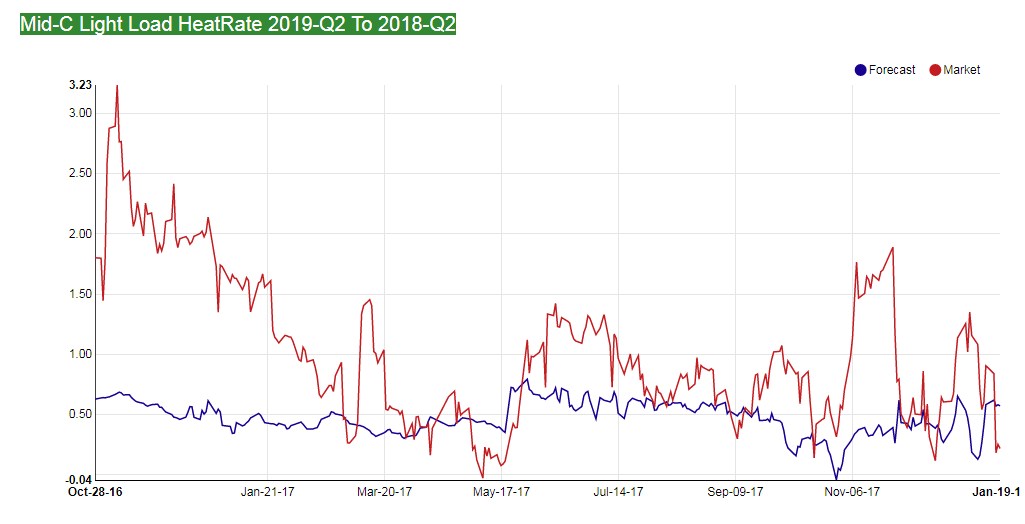 This, and the ones to follow are year on year rolls. Buying cheap here can hedge out some front-end length if you need that. The roll is back to being cheap. 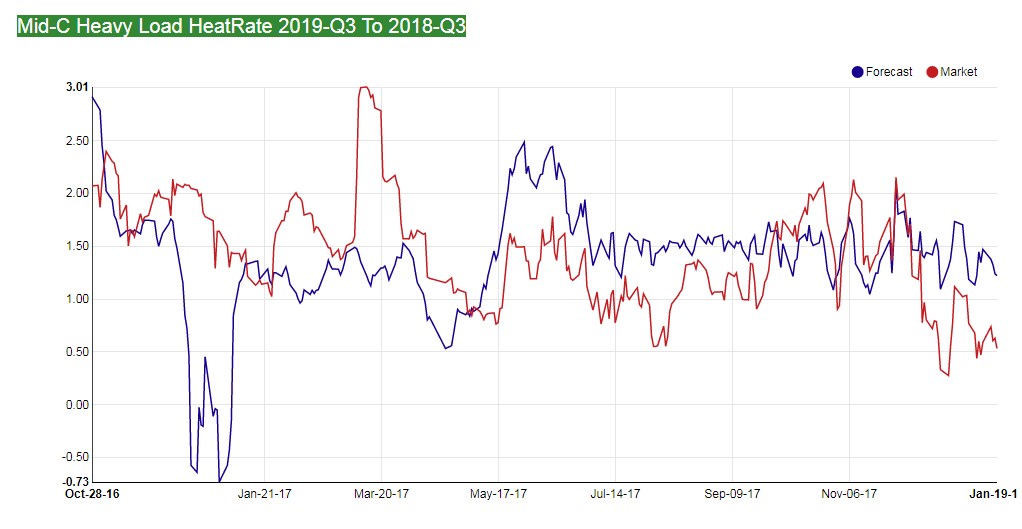 Call these a water year play; if WY18 is below average, you’d want to sell, if its healthy we’re not so sure you’d want to own the 18 over the 19. 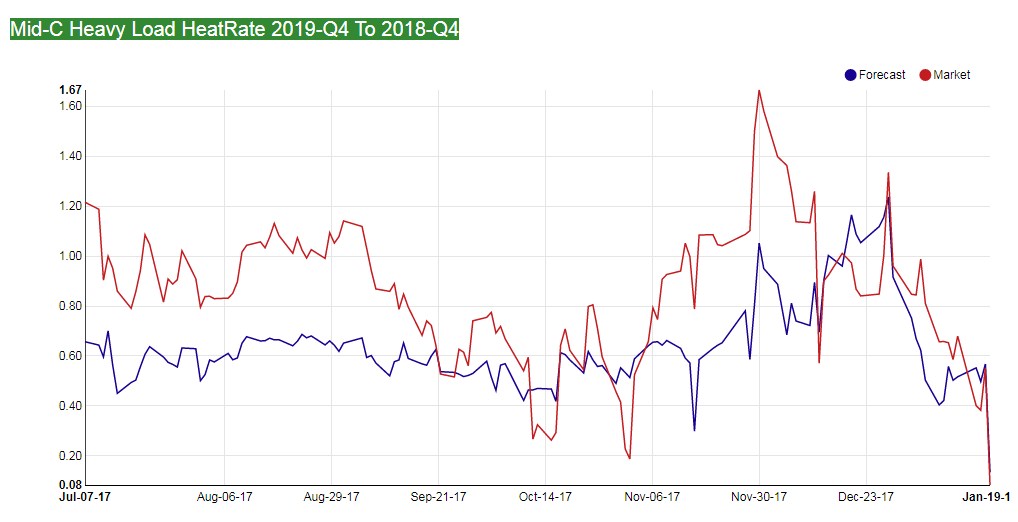 This one, the Q4 19 to 18, is the most compelling buy. We already know the DC outage is a week or two longer than last year’s, and right now we know WY18 is near normal. Why the preference to 18?

The next batch is the falling stars (sort WoW ascending). 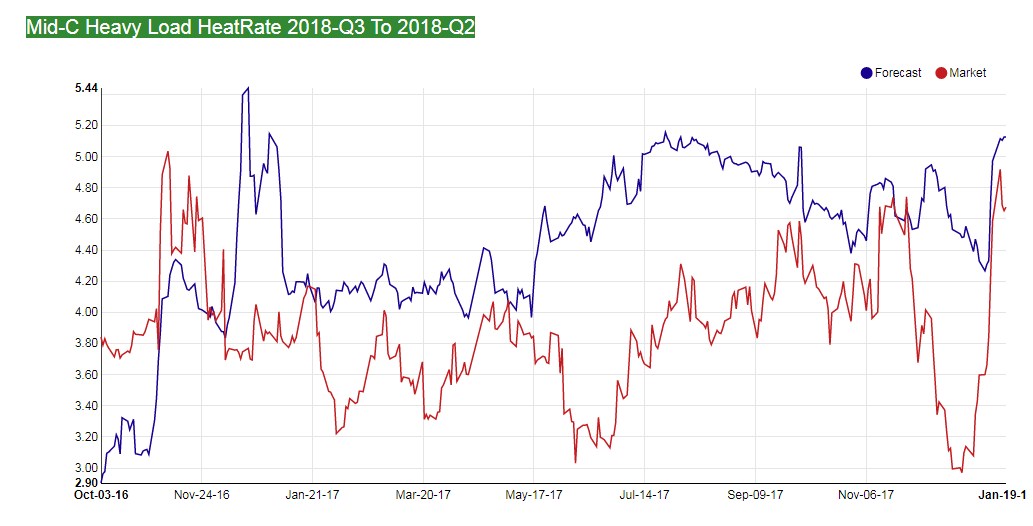 The market is loving on the Q3 at the expense of Q2; a few weeks ago it was a compelling buy, today we’d liquidate that length. 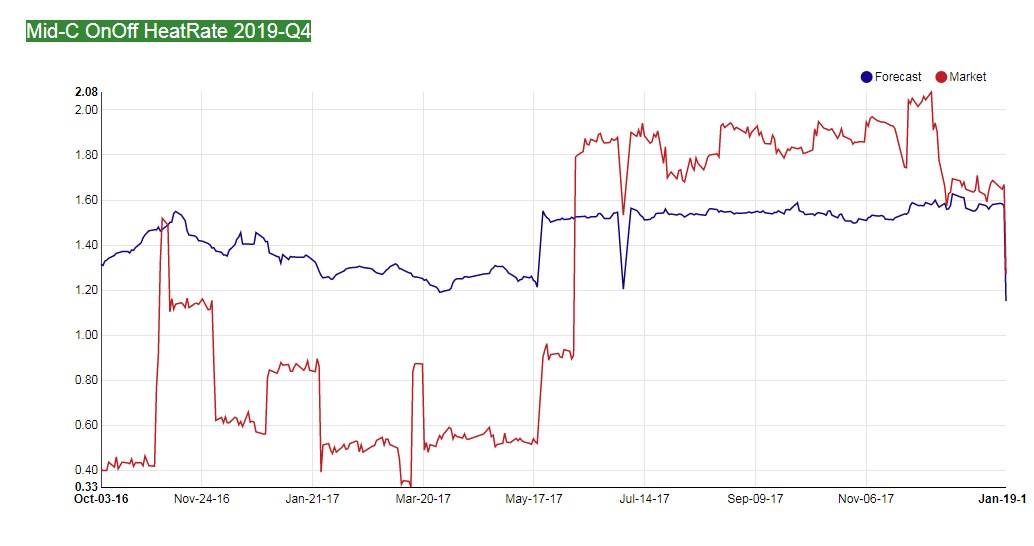 Way out in the curve, but a huge move and now it is cheap versus the 180-day average. 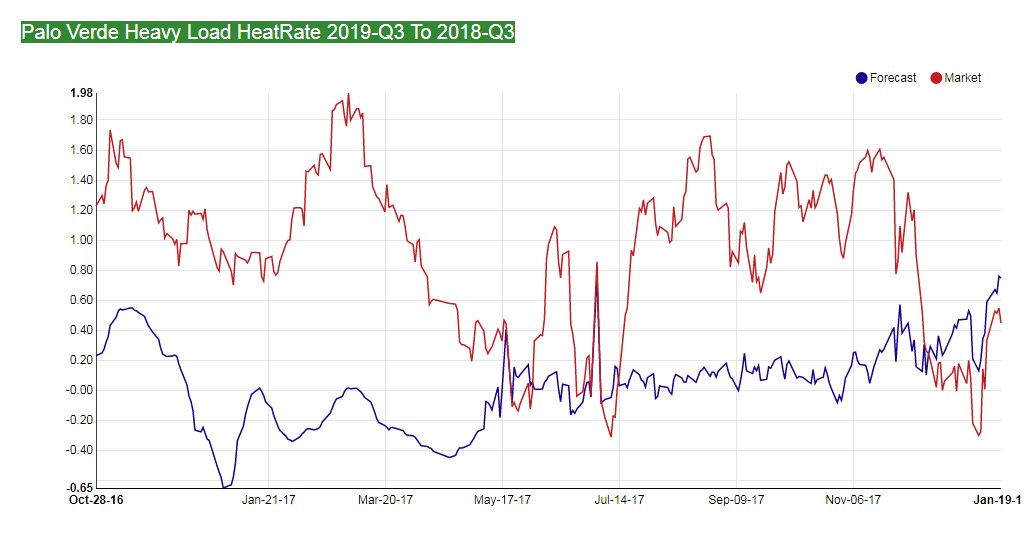 One had to be fleet of finger to catch this, but one would be 1000 btu richer were one. 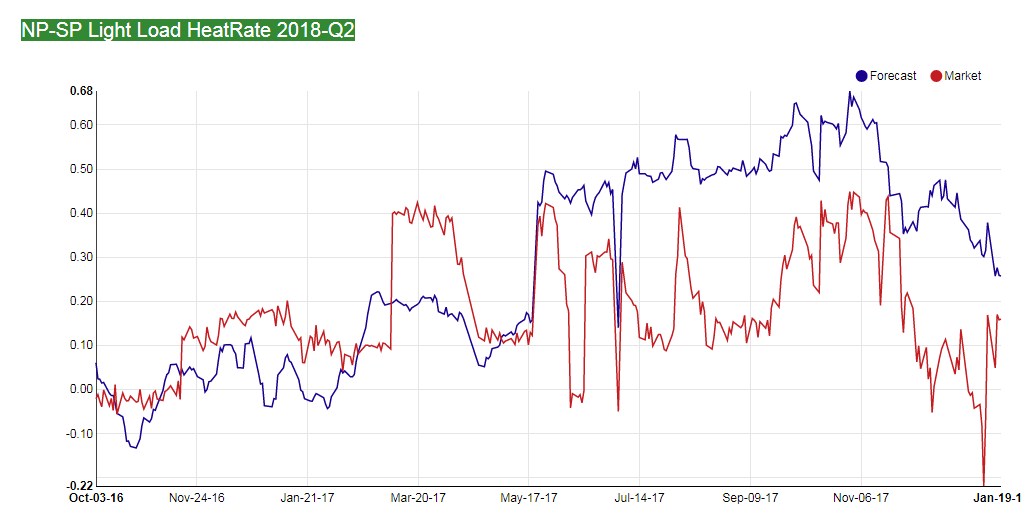 And even fleeter of finger to catch this, we pointed it out and the market bid it back to value.