Our last post of the week will review some of the significant moves, and perhaps some opportunities, from the back of the curve. As always, we use the APT tool to glean the nuggets. The first set of reports are from the “Best” category, found by sorting on Rank Ascending. We’ll follow that group by looking at the “Rising Stars” which is rendered by sorting on WoW descending. Finally, we conclude by looking at the “Falling Stars,” those ranks which have fallen furthest. Those falling stars have often returned some of the more exciting opportunities, by the way. 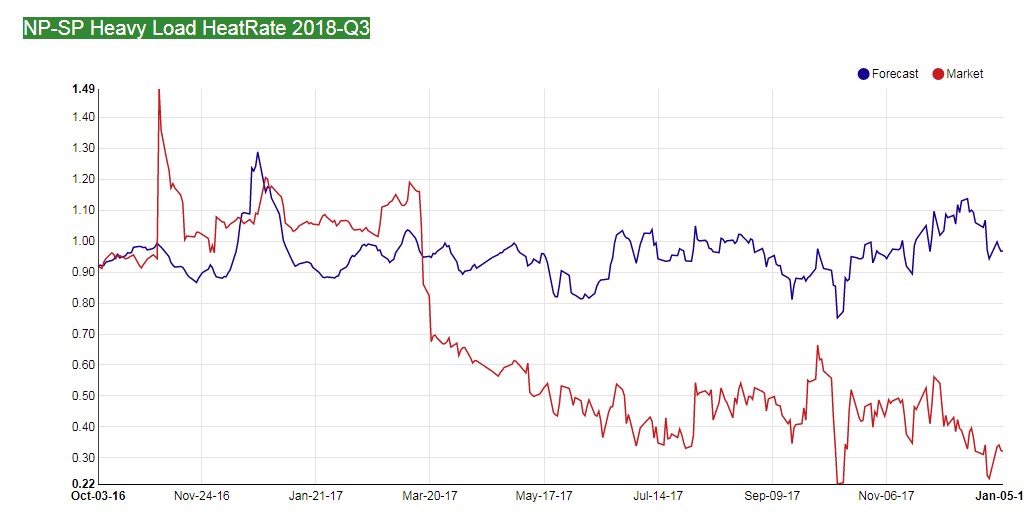 This trade, the NP-SP Q3 HL, is about like watching paint dry, but now the derivative hit bottom and bounced up. We think it is still cheap in a very dry water year, which CA is staring at as of the first week of Jan. 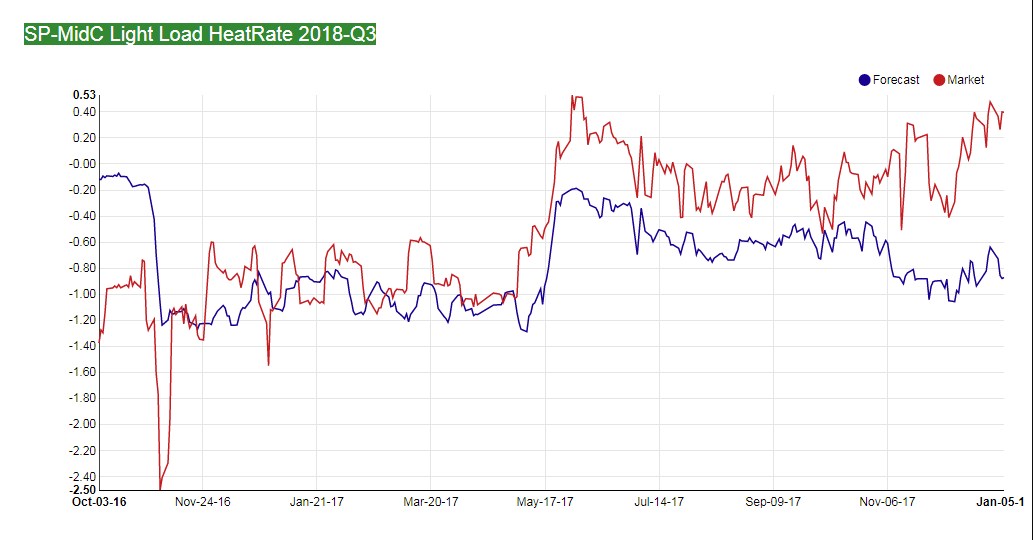 Not cheap is the SP-MidC Q3 LL spread. This product collapsed in Dec and had soared of late and is now back to contract highs. Its ultimate value will be set by cash in Q3, but as of January, your best guide is snow depth in the Northwest. Those SWEs are above average at some stations, and below in others, but the 15-day outlook is more dry than wet. Paint dries slowly, and Qs move like a tortoise (sometimes), so to position your book correctly you must move like that reptile. As long as the weather stays dryish, we’d be getting more biased towards the north. 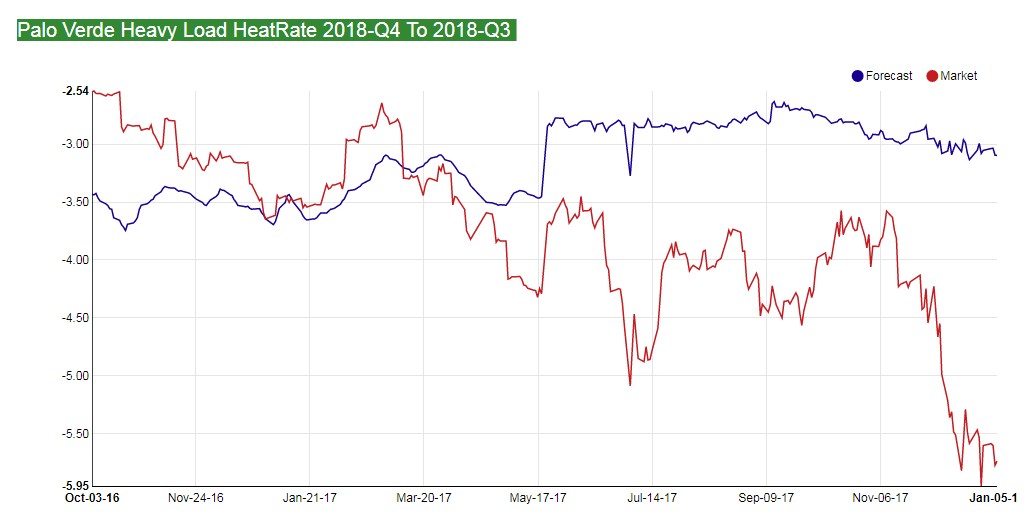 No one may trade Palo anymore; maybe even APS doesn’t trade it, weird, huh? But if you could trade it, this roll looks to be quite cheap. It bounced off the bottom last week and is drifting back there today. The risk in buying this is you’re selling the Q3 call, not always a wise proposition. 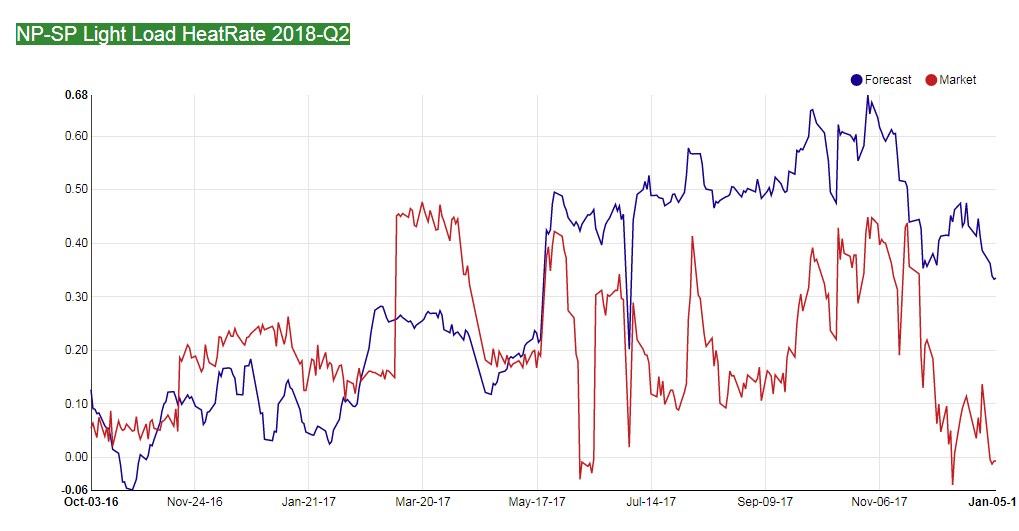 Another intra-ISO spread, this one in the Q2 LL; it hits contract lows, bounces and is now drifting back there. Same logic here, dry weather is more bullish for NP than SP. 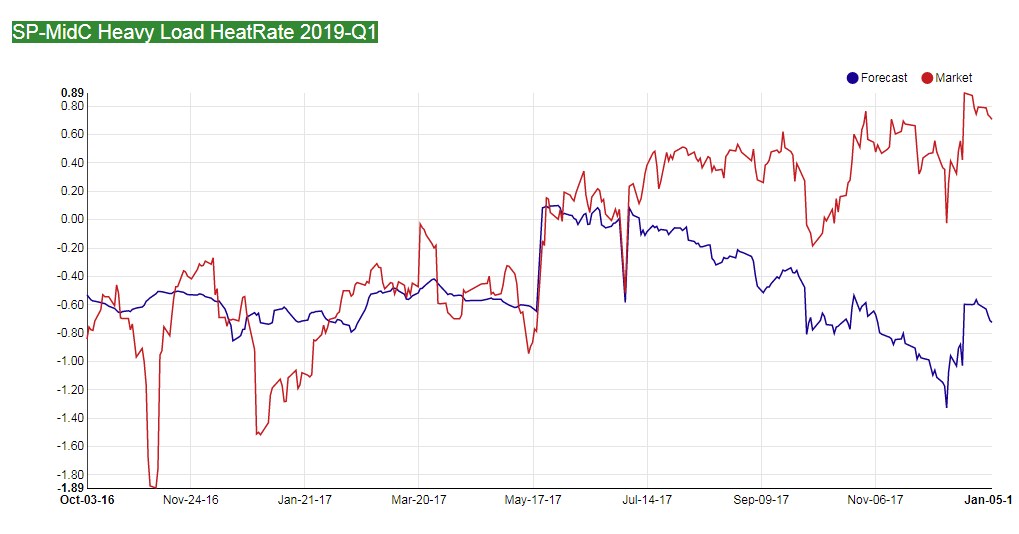 Q1 2019 is now the “prompt Q” for Q1, and this has hit a contract high. The spread would get destroyed if Portland realized a few days in the teens this winter, but we don’t see that in today’s forecast. We also don’t see anything overtly bullish at SP, aside from Socal Gas Citygate prices. So you win shorting this if the ISO goes into a cash tailspin this winter like it did last year, or the Northwest gets cold. Note seeing either happen today, but if you wait until you have 100% certainty, the opportunity will be gone. 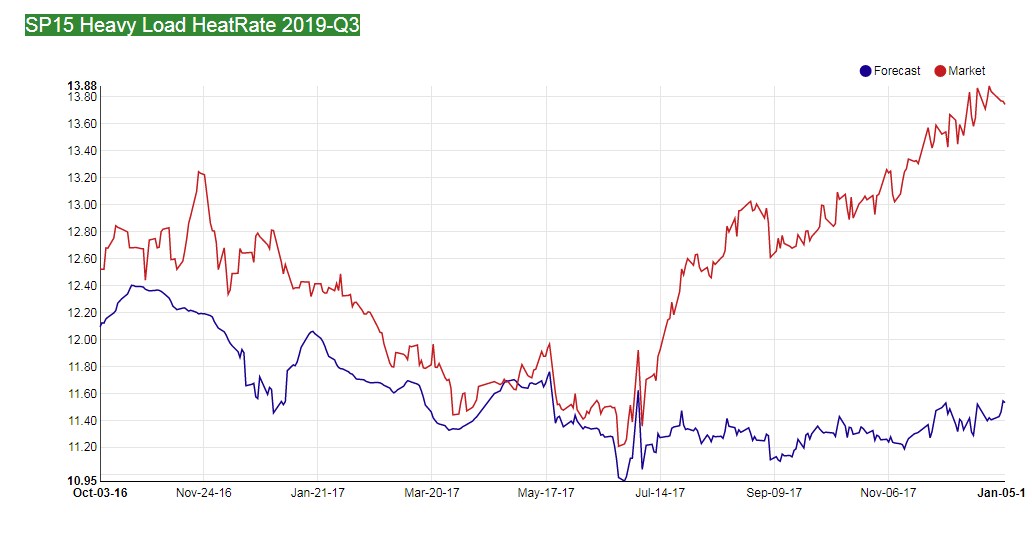 The Q3 2019 SP HL looks like the Dow Jones Index under the Trump Presidency. A trend is your friender would own this, we wouldn’t. 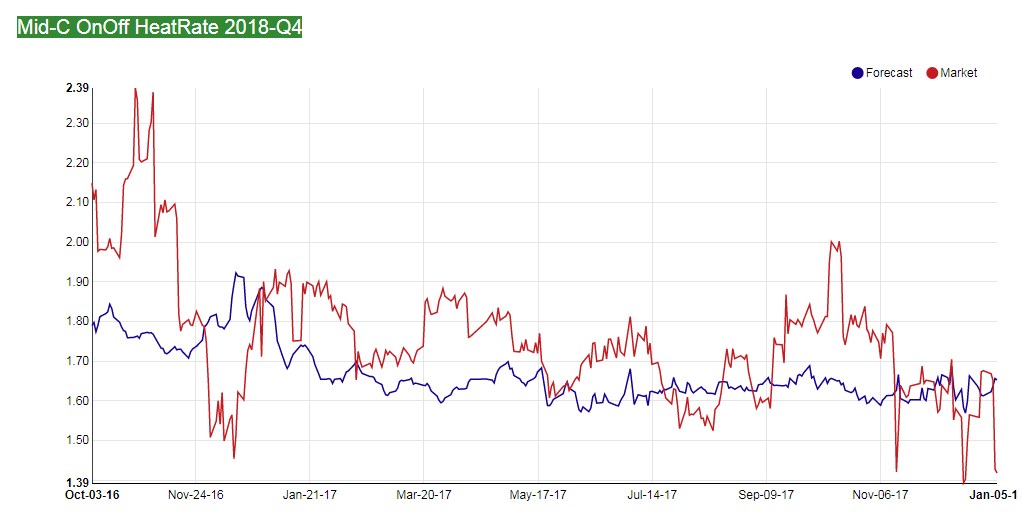 Some wild swings in this On|Off, the MidC Q4; now the deriv has swung to dirt cheap. If you can get it on, and with a confirmed DC outage, why not buy? 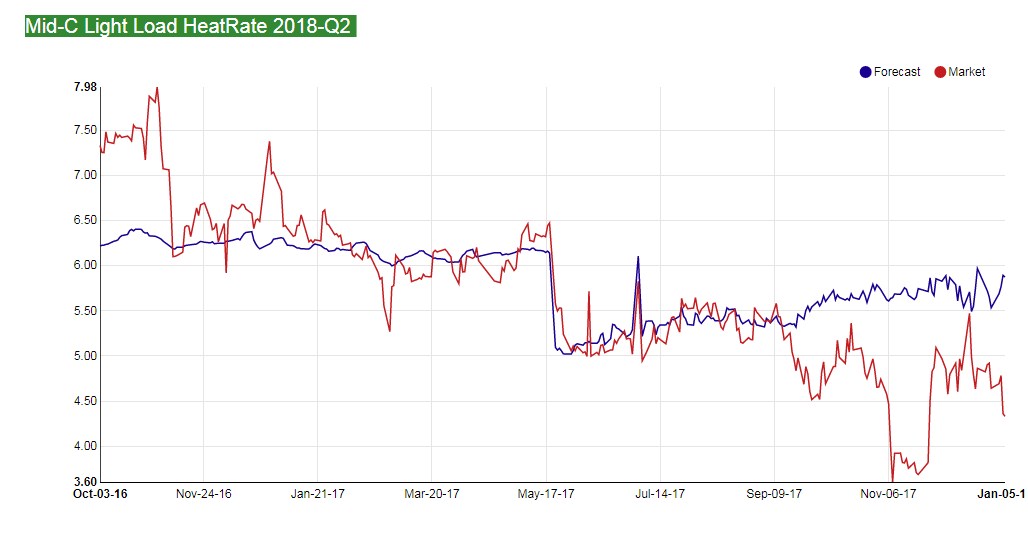 We’re posting this to show how violently the Q2 LL rallied in mid-December; now it is getting cheap again, probably off of that big build in SWE post-Christmas. Dry would reverse this. 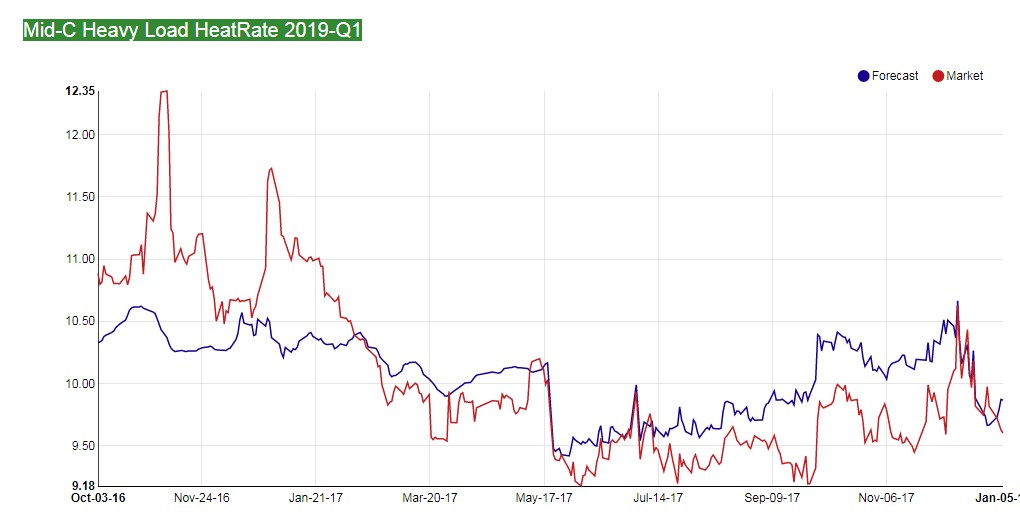 Forecast and Market are stacked atop each other and suggesting it is reasonably priced. We’d watch for Northwest cold, then buy it. 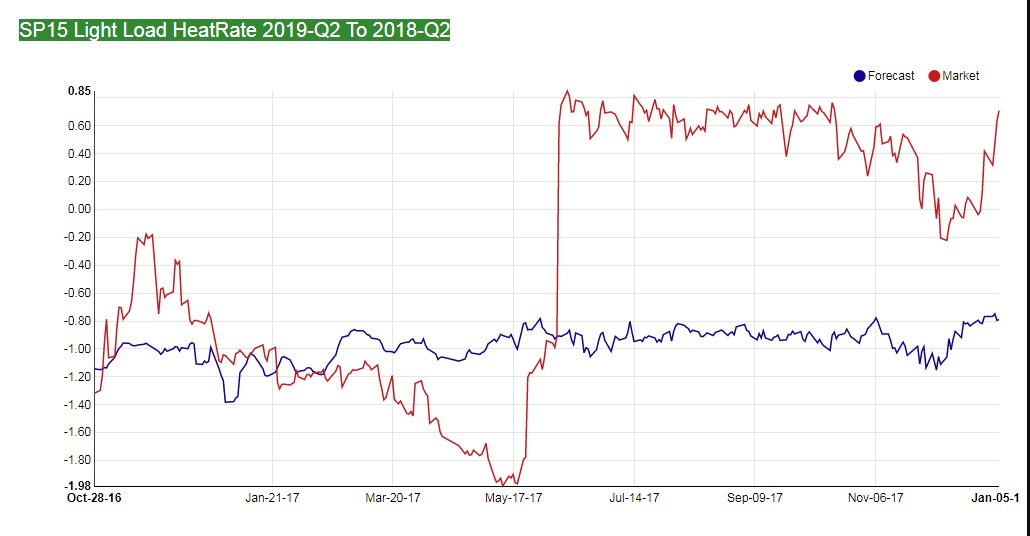 Year on year (YOY) Q2 SP LL has soared of late, which is weird given that 2018 is dry and we have not a clue what 2019 will bring. We’d short, though look how many days it held it’s top starting in June. This isn’t like owning Amazon; it’s like owning Sears. 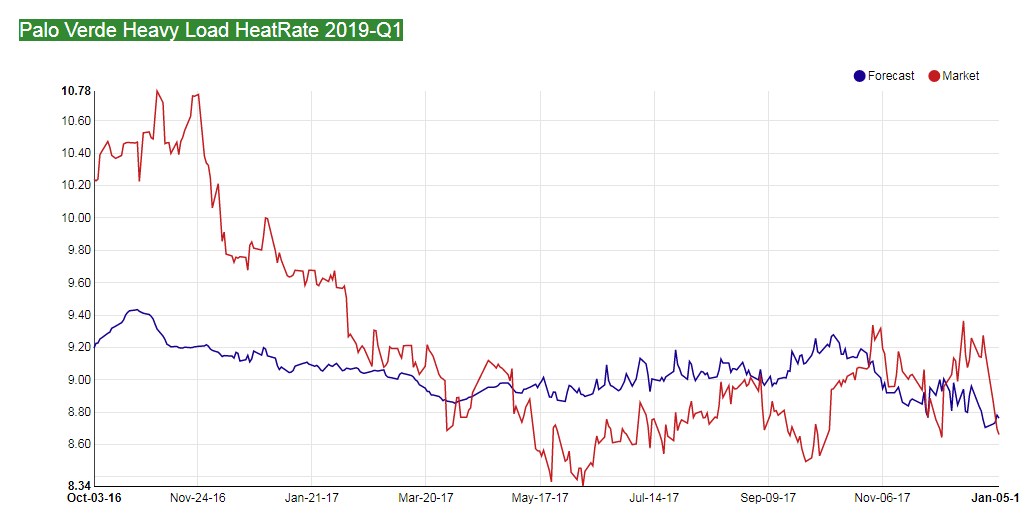 A big move down here, now back to value; if it keeps sliding, we’d buy. 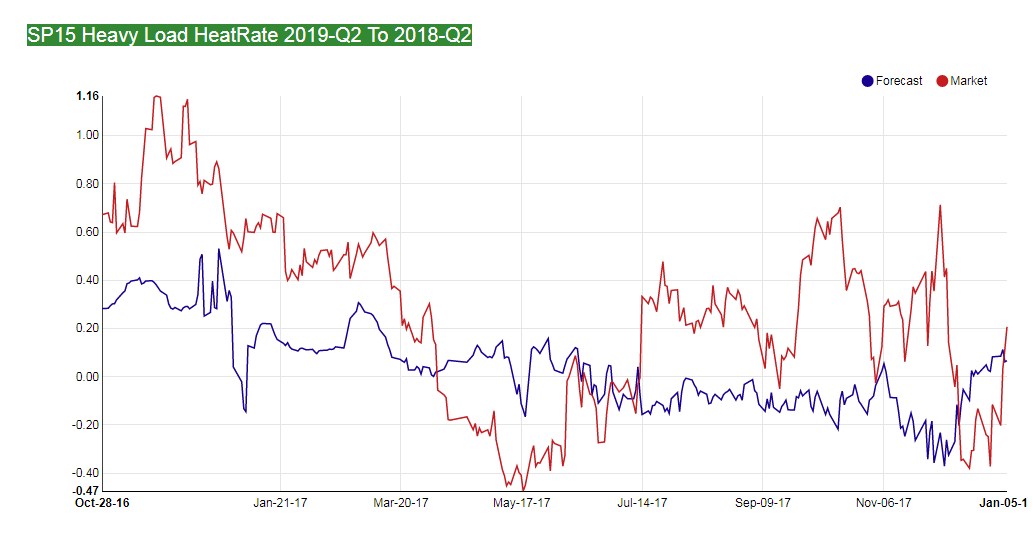 Another YOY, this one in the HL, and note the sharp rally off of contract lows. Again, same logic, dry makes the near more dear, but the market doesn’t see it that way. 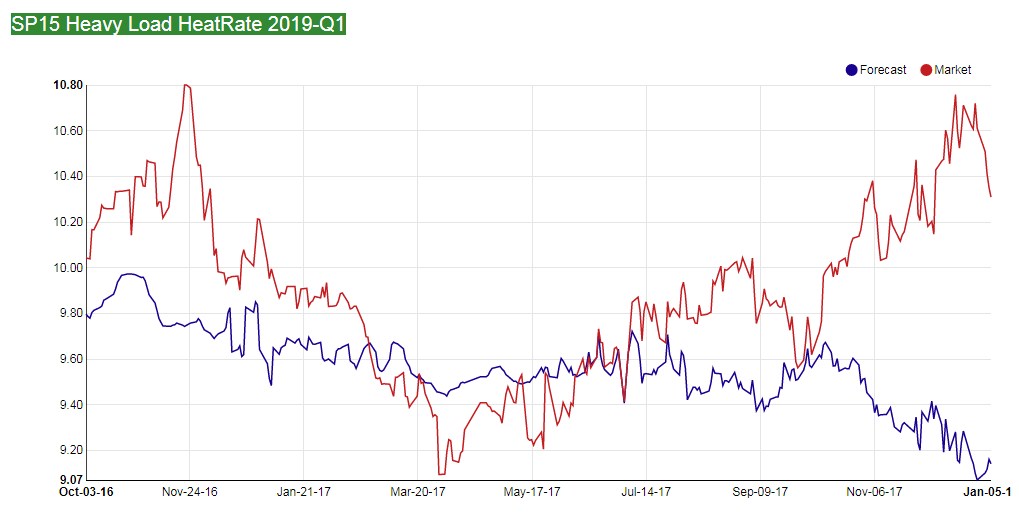 Finally, an SP market that has declined in value. From last Feb til Dec the Q1 has only gone up (mostly), now it looks like a death spiral and is tempting to own to offset some of the other SP shorts, but we would pass. 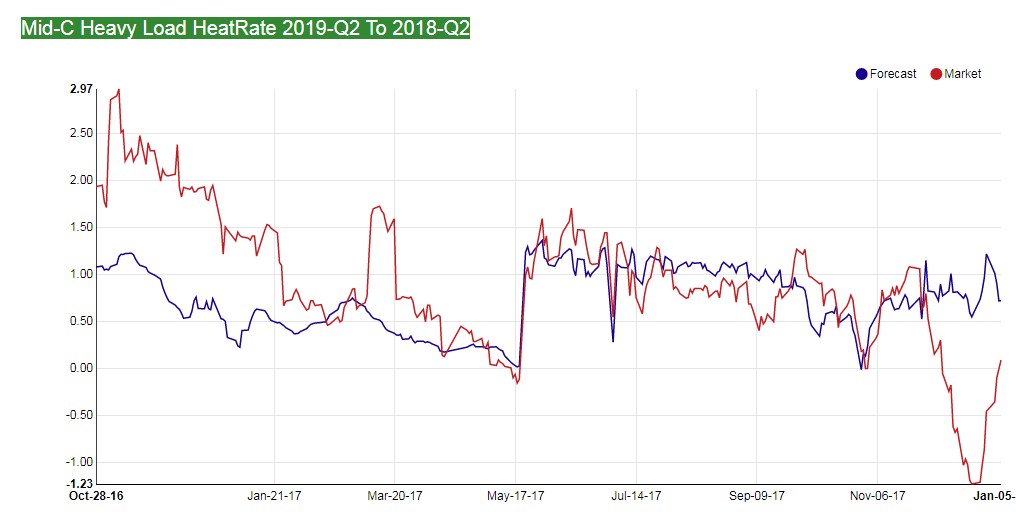 Mid-C’s version of the YOY, for LL; crazy chart, hits a stupid low (who sold that?) and now is soaring. You short this in dry, buy in wet, its neutral today and probably has more room to move up. 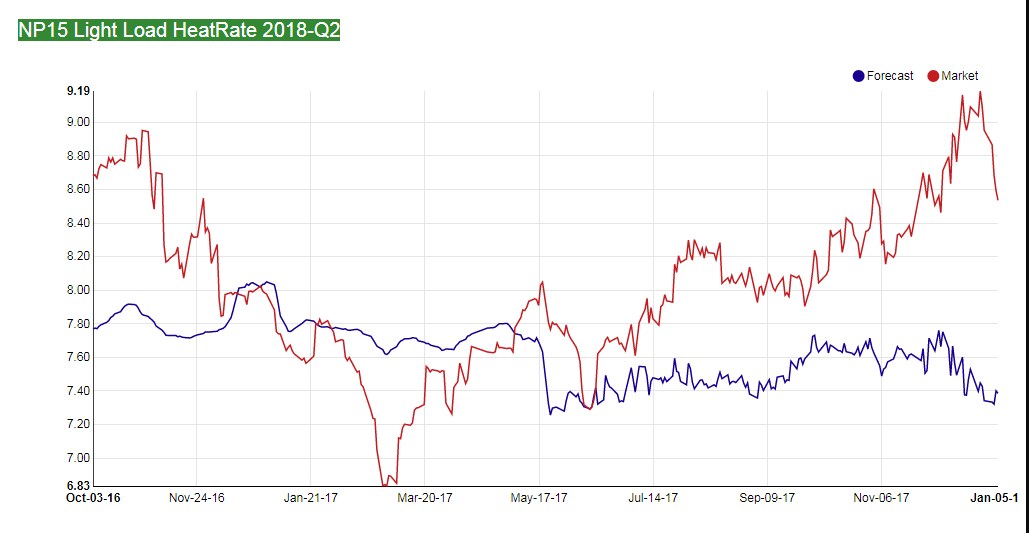 Another top realized, and a correction. It’s bone dry in the land of fruits and nuts, if this continues to plummet you have no choice but own it. 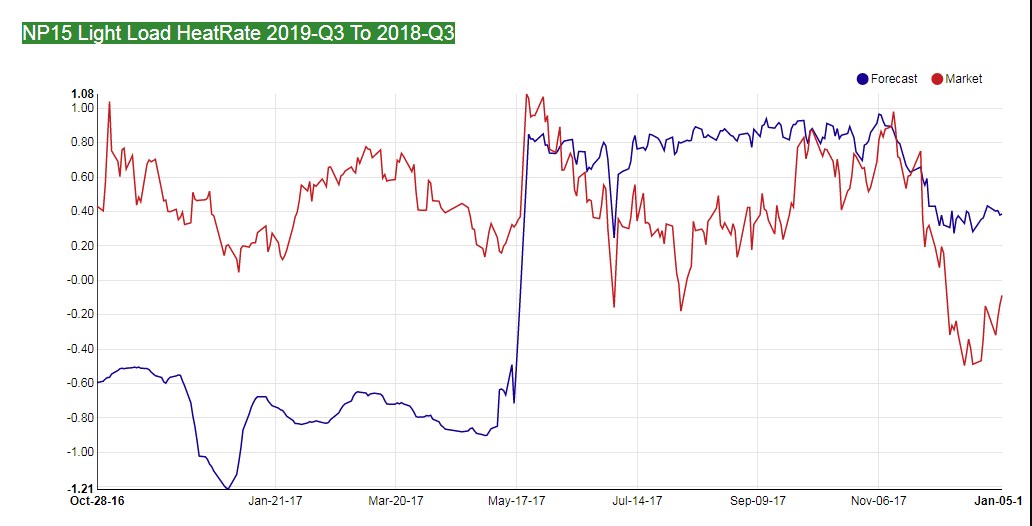