Our big news for the day is the sharpening cooldown across the western WECC; we don’t see “east coast” type cold, but the outlook is way more bullish today than late last week. The Northwest is also set for more below normal precipitation while CA realizes its most significant storm of the year.

Seattle’s lows are below normal from days 11-20, if you trust a forecast for those dates; all of the Northwest is colder than today or than this last week. Bullish.

California joins the party, similar outlook as the Northwest — backend either average or slightly below. That said, there will be some weak demand this week as the state works through some warm anomalies, along with heavy precipitation. 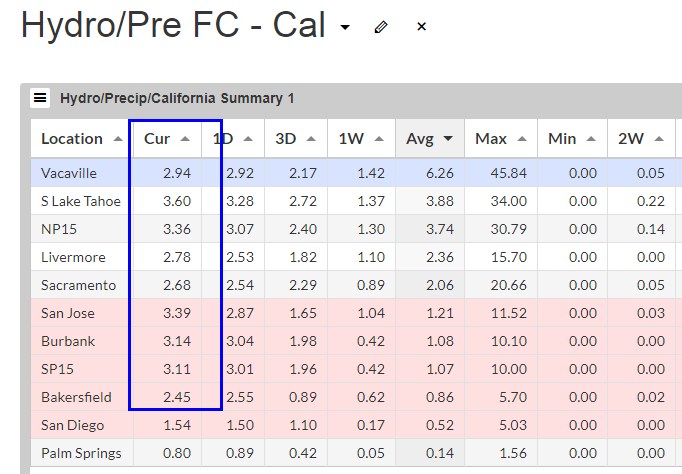 Even the San Joaquin Valley gets drenched, Bakersfield is poised to realize 2.5″ over the next ten days. Even with this storm, the state remains around 50% of normal.

Phoenix will toy with setting new lows, if this current forecast holds, later next week. This week, like the Golden State, will be mostly above normal.

No blue, all is calm, all is mild, all is bearish. 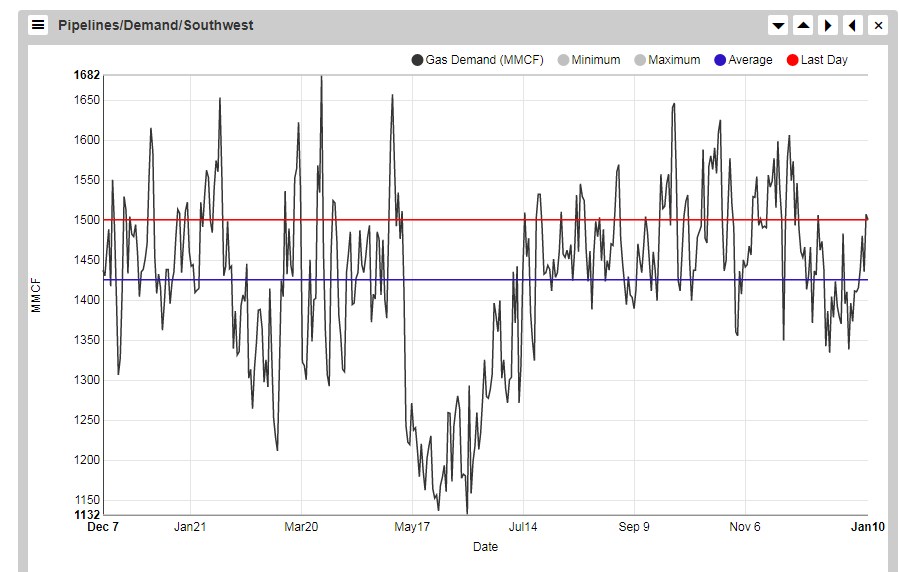 Ansergy’s proxy Core Demand model has the WECC Interior gas demand picking up from last week, yet remains well below the highs. This is an LDC-based index and therefore includes some power noms. 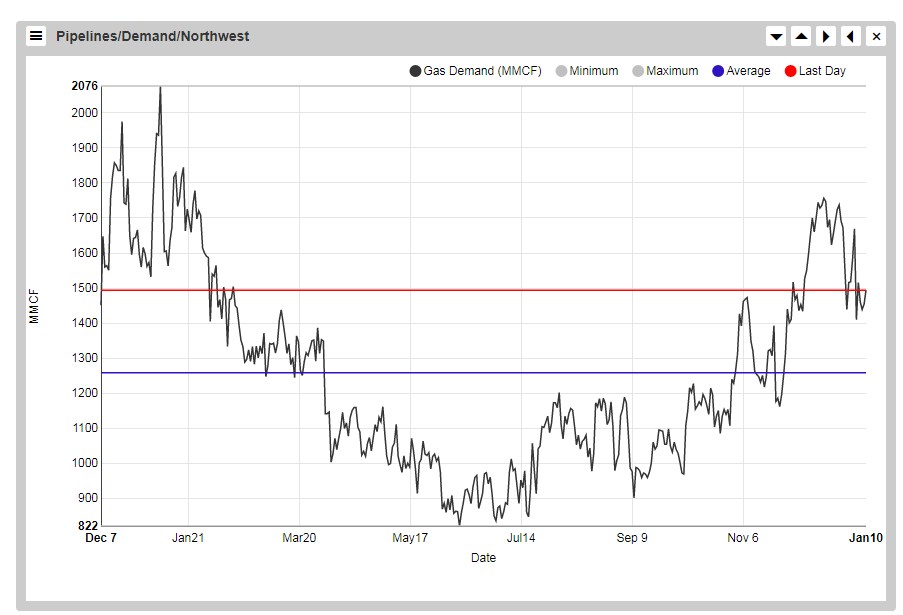 Northwest demand has cratered from last month and is way below last year’s lofty levels. Climo temps are rallying with each passing day at every WECC station; the odds of bitter cold decline the further we march into the 2018 calendar. In other words, we’re approaching “now or never” land for a significant Northwest cold event. 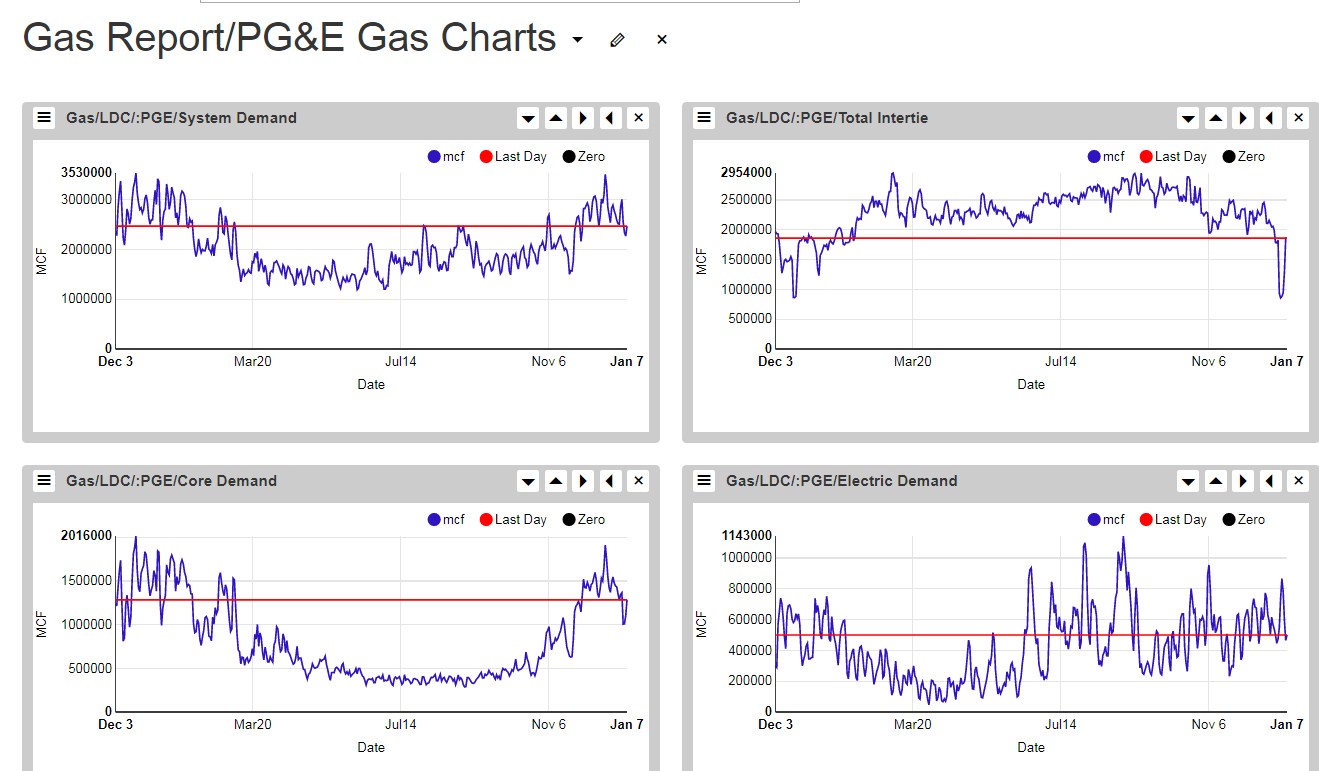 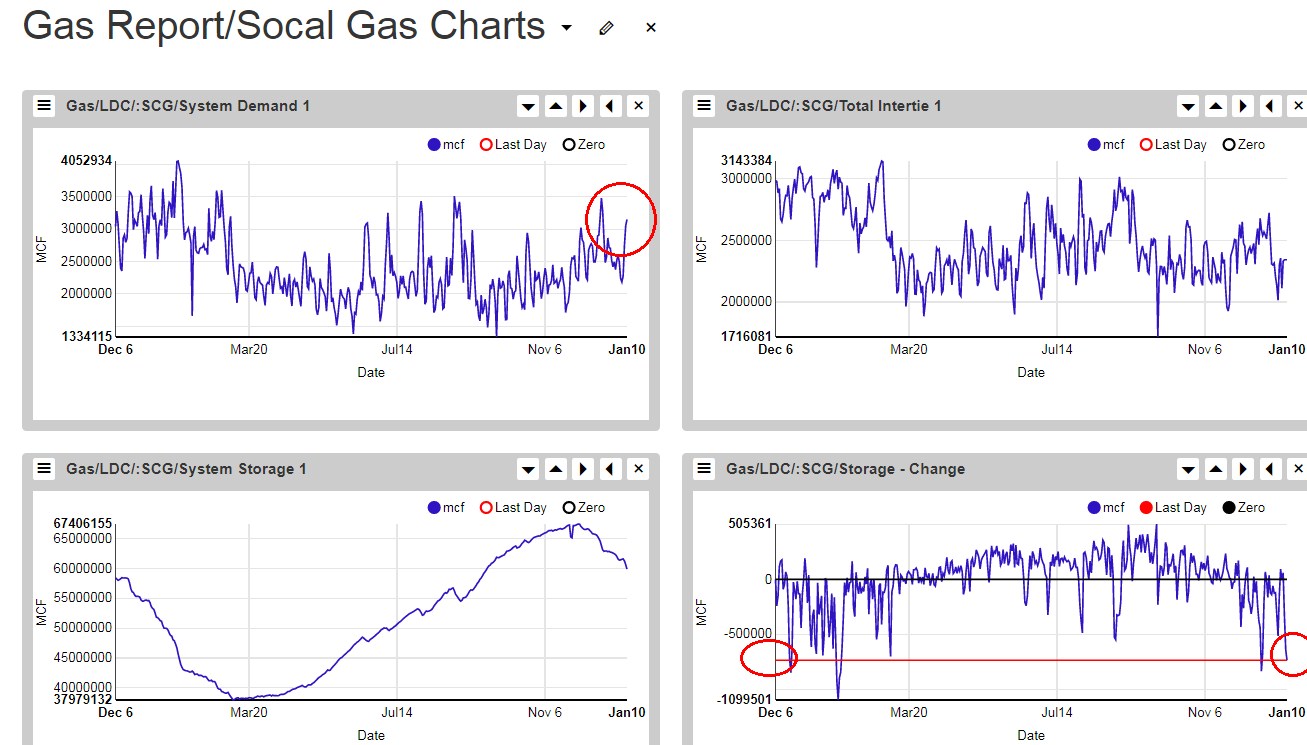 Socal’s is better, the LDC realized a big jump in demand and had some season-high pulls from its storage. Total storage is now approaching last year’s low levels. Next week’s cold, should it hold, will drive additional deep draws. 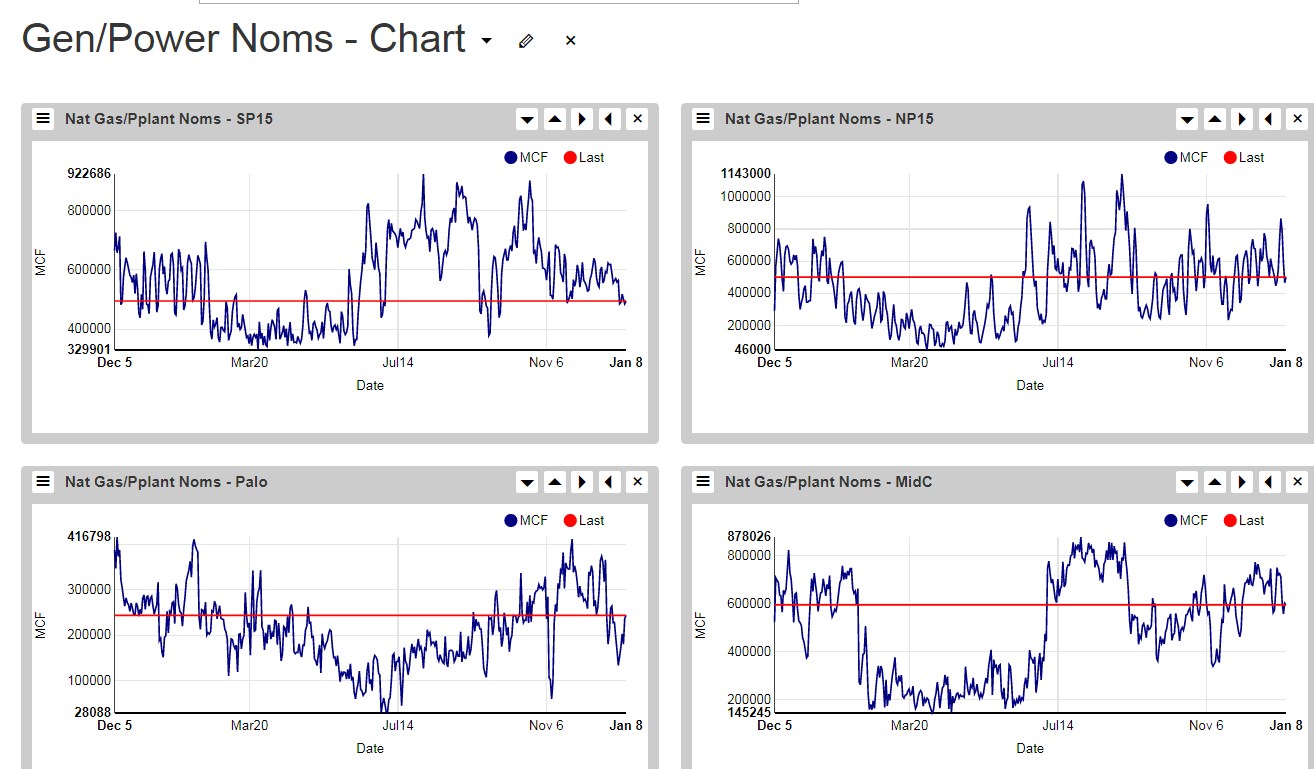 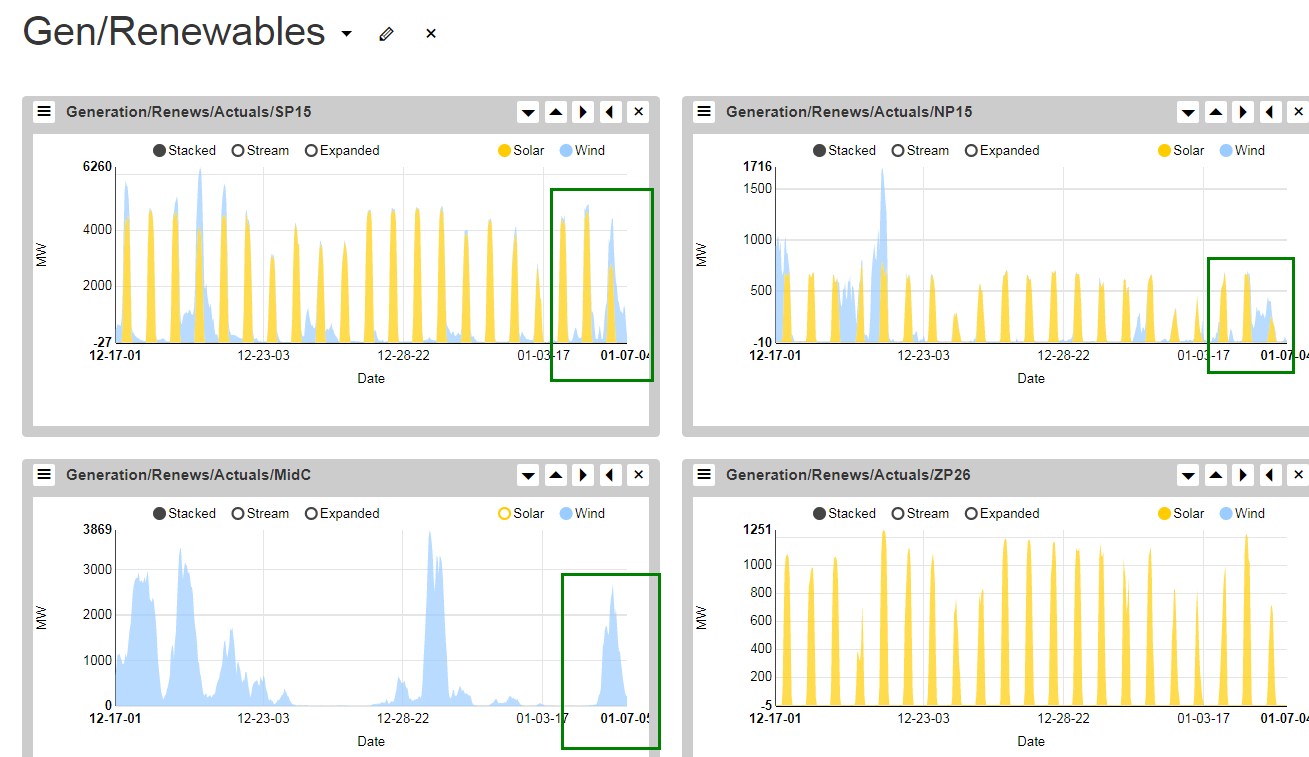 Wind energy rallied over the weekend while the sun set on solar; check out ZP’s output, about half of average. Most likely these cuts a result of recent rain.

This week should be the Corps of Engineer’s first flood control release, but the agency has not posted its 2018 calendar, yet. Last year, the first report was released on January 9, which was a Monday. Maybe we’ll see those numbers today. The Corps uses the NWRFC’s Apr-Aug TDA forecast:

Which was 99% of normal on Friday and given a dryish 10-day outlook we’d expect the number to pull back a few points, so let’s call it 97%, which, coincidentally, was the value used in last year’s January release:

All things being equal, then you should expect the Corps to require a draft to the mid-1250s at Coulee. Call that bullish for March-April, at least relative to a more prominent water year where the drafts often go as deep as the 1230s. The flipside of modest drafts are modest refills, all of which suggests the Mar-Apr to May-June spreads should widen.

The precip outlook for the Northwest isn’t bone dry, as we’ve seen in past forecasts, but compare the ten-day cumulative versus normal, and you’ll see it is about half. 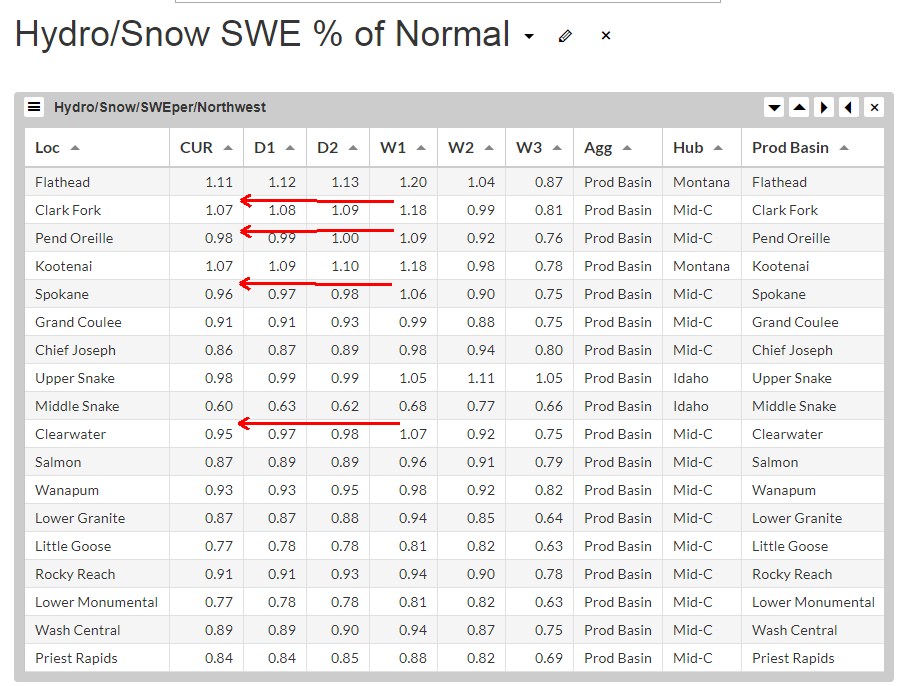 There is still snow in the hills, but the % of average has fallen around 10% across every station. Should the dry hold, that trend will extend into next week, all of which suggests, to us, is a real TDA outlook in the low 90s. 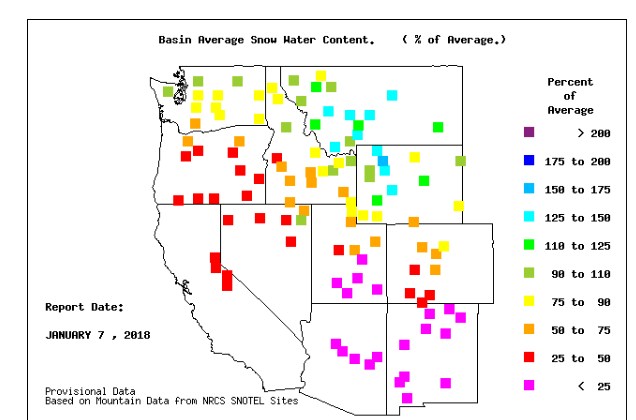 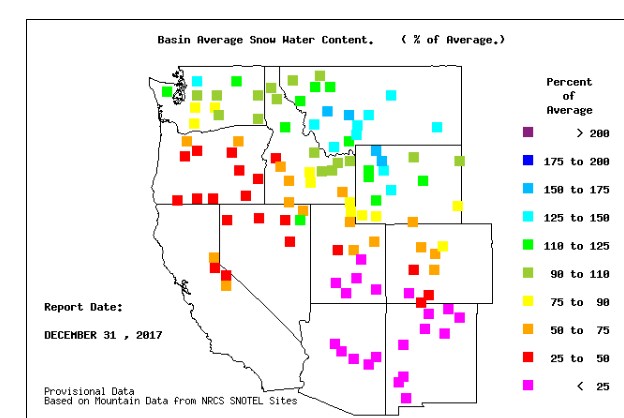 Most Upper Columbia anomalies have slipped, so has the Snake. 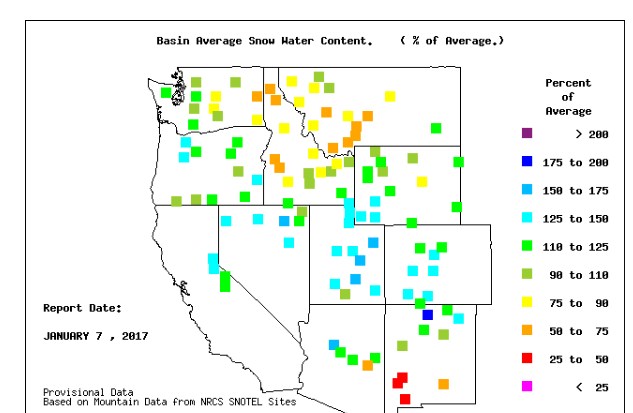 Contrast this year (Jan 7) with last year; the Snake was bursting at the seams while the Upper Columbia was nearly identical, all of which suggests that if last year was 97%, this year is about 93%. Before moving on, it’s worth taking note of how much of the snow year remains: 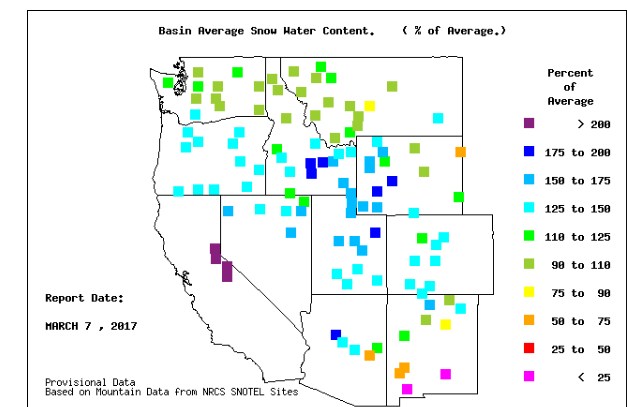 A tale of two plots. Last year the snow never stopped falling which is why we use the word “caution” frequently in calling a water year this early.

Regulated discharge on the Canadian side of the Columbia is changing; now we are seeing close to 100kcfs flowing out Arrow; even Mica picked up a bit. Now flows at the border are well above average.

Coulee discharge, of course, has rallied, though some of that BC water ended up in Lake Roosevelt.

The Lower Snake is running flat, minimal shaping taking place, and strangely, flows at BON are off. As Arrow drafts, Libby and Dworshak saw their spigots turned off. 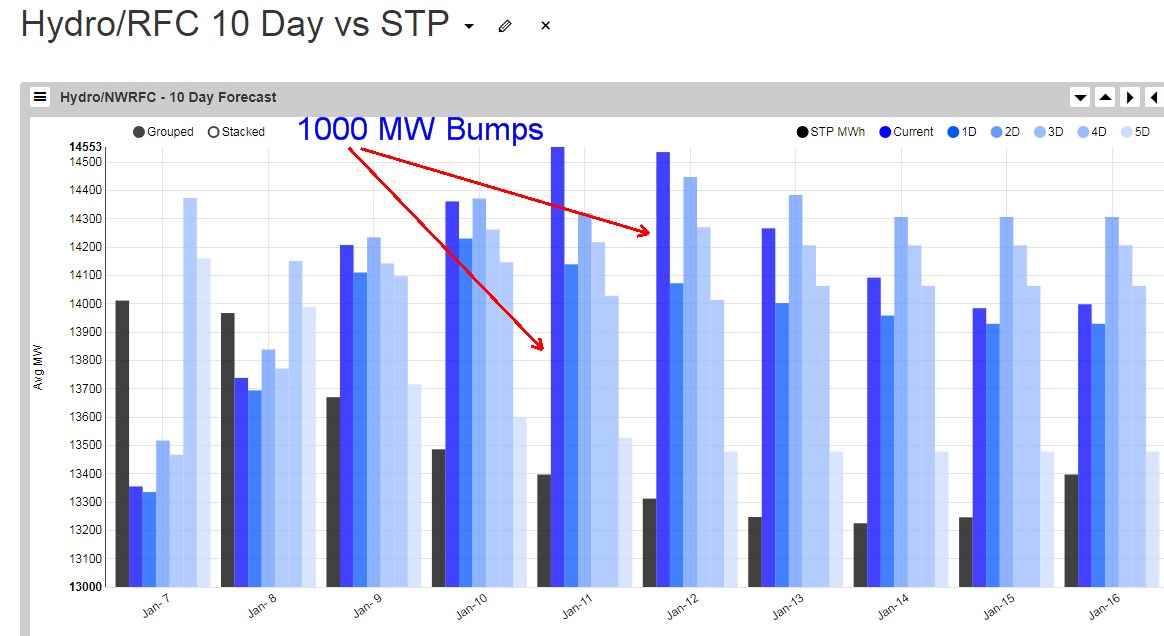 It’s Monday, today the NWRFC will release a new STP, and if last Friday’s 10-day forecast provides valid hints they will release a BOM bear; the agency has jacked flows to the point where the Northwest is poised to add another gig of hydro energy this week, and next.

BPA tweaked its maintenance schedule on Friday, they now have the DC derated to 1600 for a couple of Feb days.

Either cash was exceptionally weak over the weekend, or our friends to the North are growing more bullish on Mid-C BOM. Weekend flows on the Northern Intertie went from strong exports to flat, even a few hours showed imports. Meanwhile, the DC hit TTC more often than it didn’t, and the AC was mostly full. SP imports from ZP picked up suggesting a slight tightening there.

We are more bullish than bearish, all driven off of hints of cold weather in the back of the forecast. But, that said, we’ve been burned on that many times this winter. More on our market thoughts in a post to follow.