Futures (Henry) have been smoked over the last couple of days. It seems the Cyclone Bomb was a bomb and the only thing to blow up were the hypsters that bought into CNN’s stories. LOL.

What’s not a bomb are those pesky Socal Citygate prices; just when everyone let out a collective exhale, caused by the return of the TWP, Socal realizes a 33% rally in the spot market. Must be some dire fundies driving that, right? Let’s look… 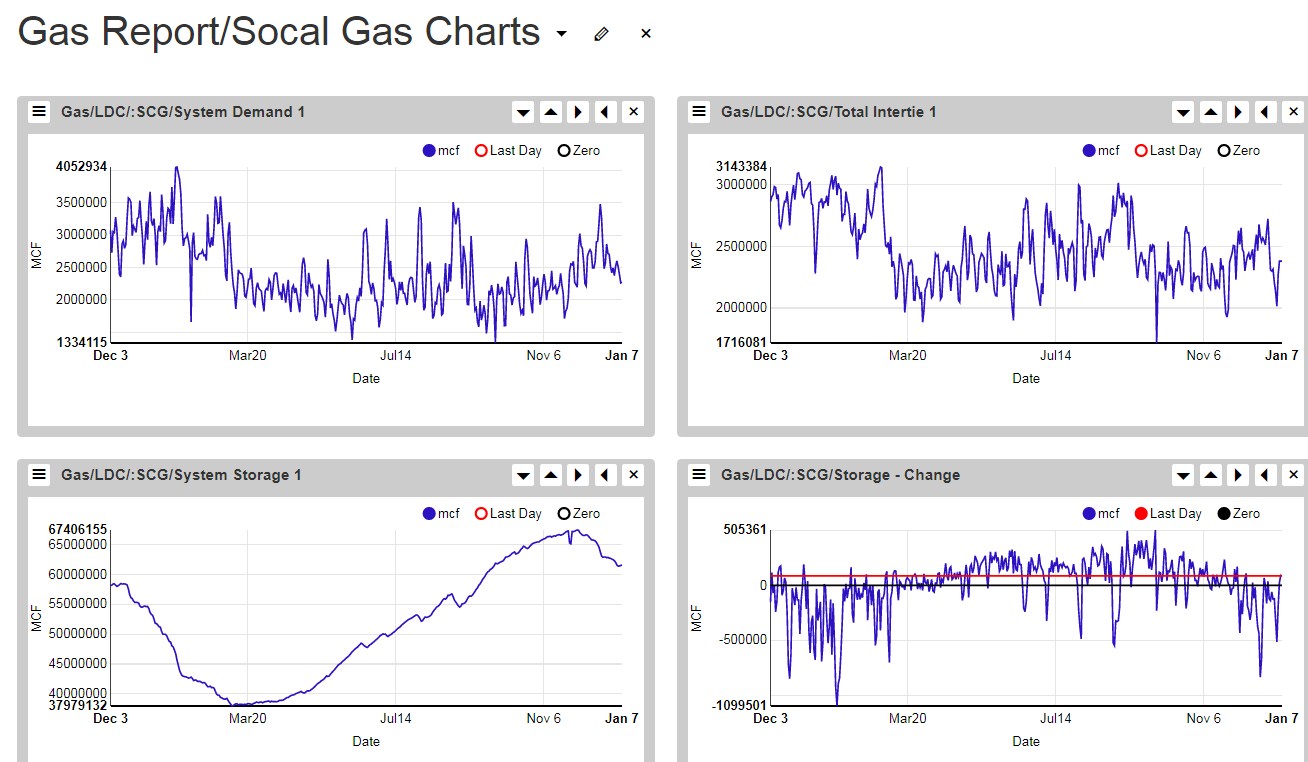 A quick checklist should identify the driver: 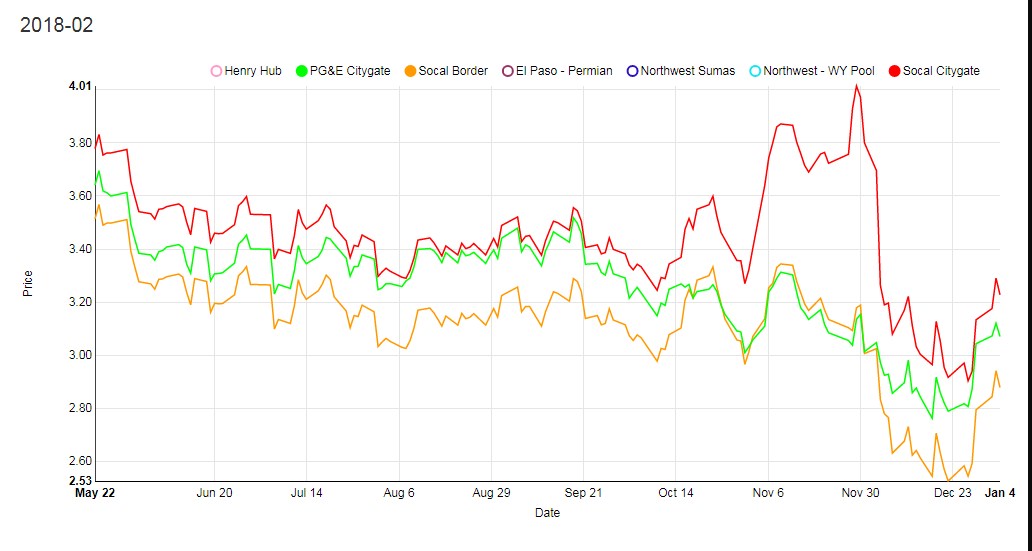 And, of course, that uptick in cash jacked the Feb contracts; now SCG is back to trading over PCG. An important point as it may impact how the heat rates settle (see next post, later this morning). 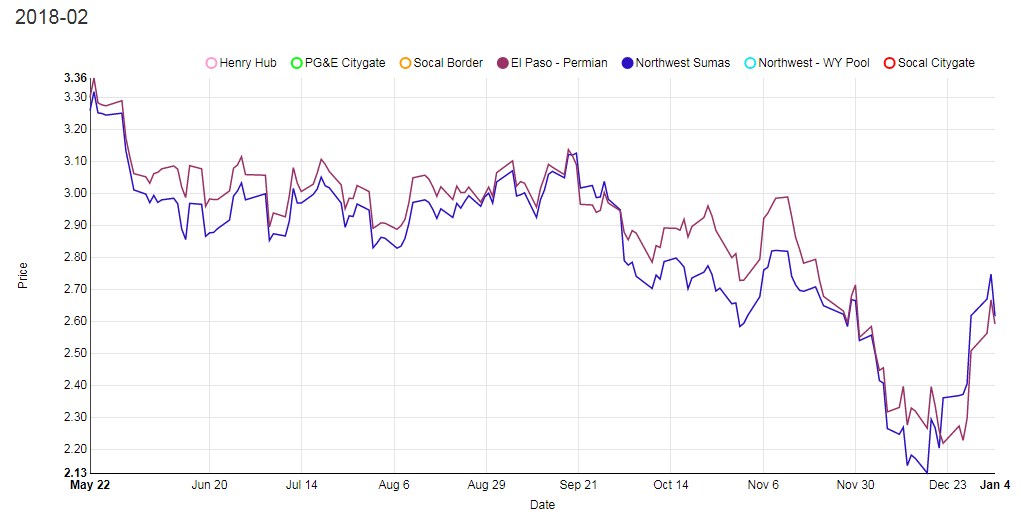 Not everyone has SCG exposure, the rest of you care more about Sumas and it, too, has been on a roll after wallowing in the wastelands. El Paso – Permian has traded premium to Sumas all year; now it’s not. That is a spread we don’t think can hold, not without some cold weather in the Northwest and, alas, we don’t see that.

Before moving to weather forecasts, look at this chart: 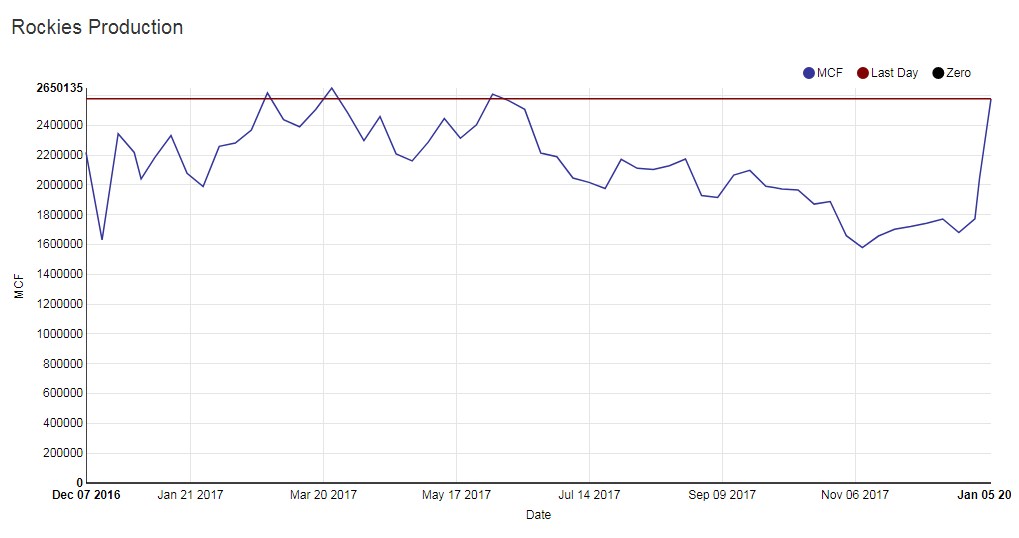 Rockies gas production, a derived value computed by mapping Receipt points on the pipelines. Note the massive rally, nearly a BCF/day, in the last few weeks. Overlay Nymex on that plot, and you’ll know why. It seems production has become the new storage; the producers watched CNN’s expose on the Cyclone Bomb and turned up the flows; will they turn them back down now that the Bomb is a Bust? 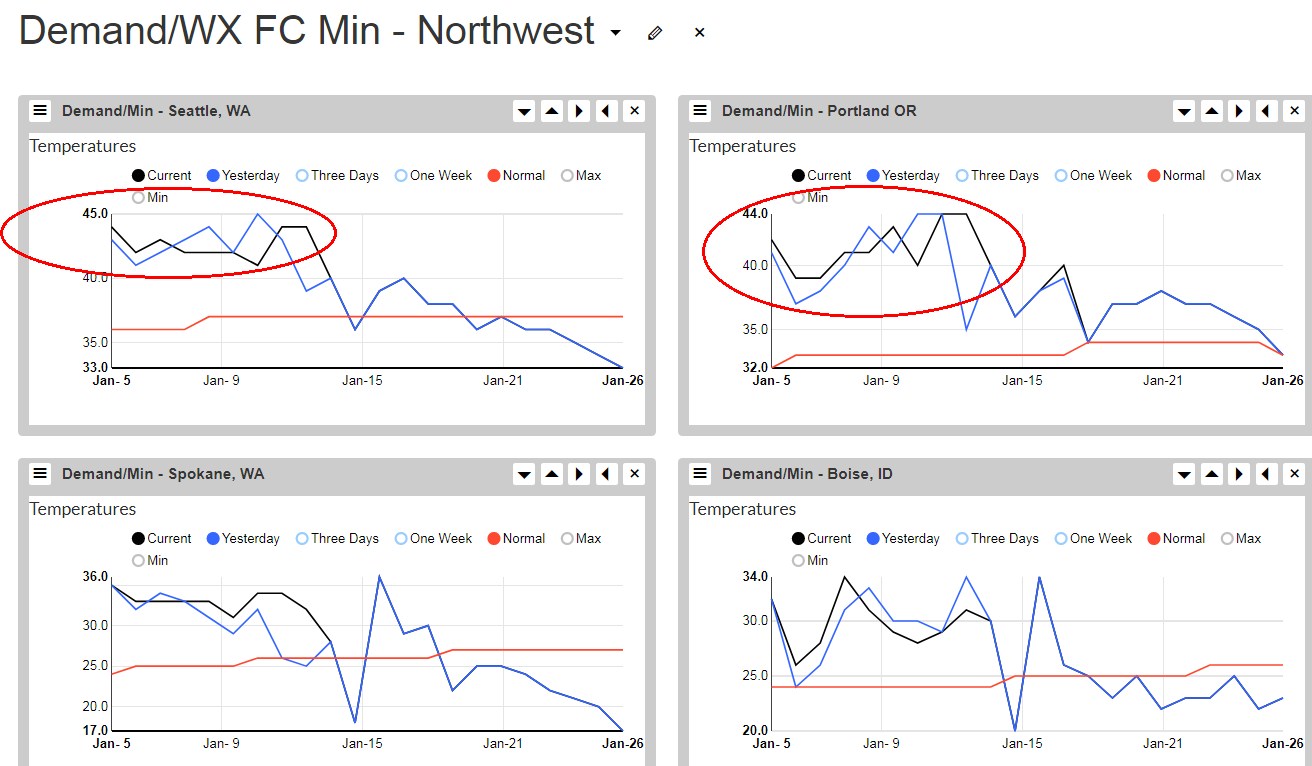 No, we don’t, we see two red circles where we’d like to see BLUE. Both Portland and Seattle will flounder about ten degrees above average for the next week, then the back end of the forecast brings both cities back to normal. Hey, there’s a bold forecast, back to normal. Each week Accuweather returns days 8-15 to normal, then a week later that week becomes ten degrees above normal. Call it the Northwest’s Cyclone Price Bomb.

Maybe that SCG rally is driven off of bitter cold in LA? Maybe not, but at least Socal is average where it’s been several degrees warmer than normal, of late. Despite the dearth of negative anomalies, this is maybe the most bullish Winter Demand Forecast we’ve seen in Kalistan.

Green circles are bearish, lots of green; the only blue is Salt Lake and Spokane. Bearish.

This is a historical plot of Solar and Wind in California; it caught our eye because of how low both wind and solar are today. Some of that (Solar) is calendar-based, but the plots do emphasize how little renewables are running today. 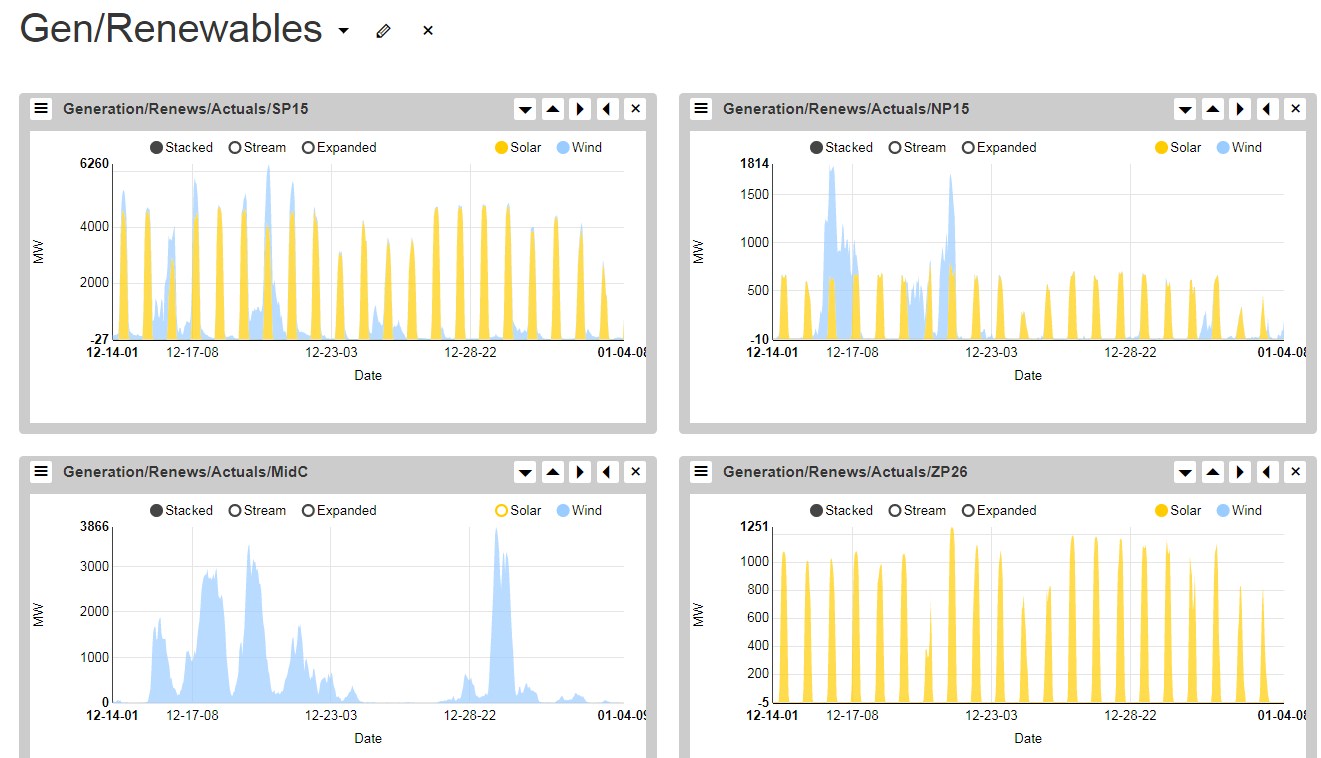 Here is the most recent look at renewables; Solar is down at all three ISO hubs, and there isn’t any wind anywhere, not even in the Northwest. Bullish. 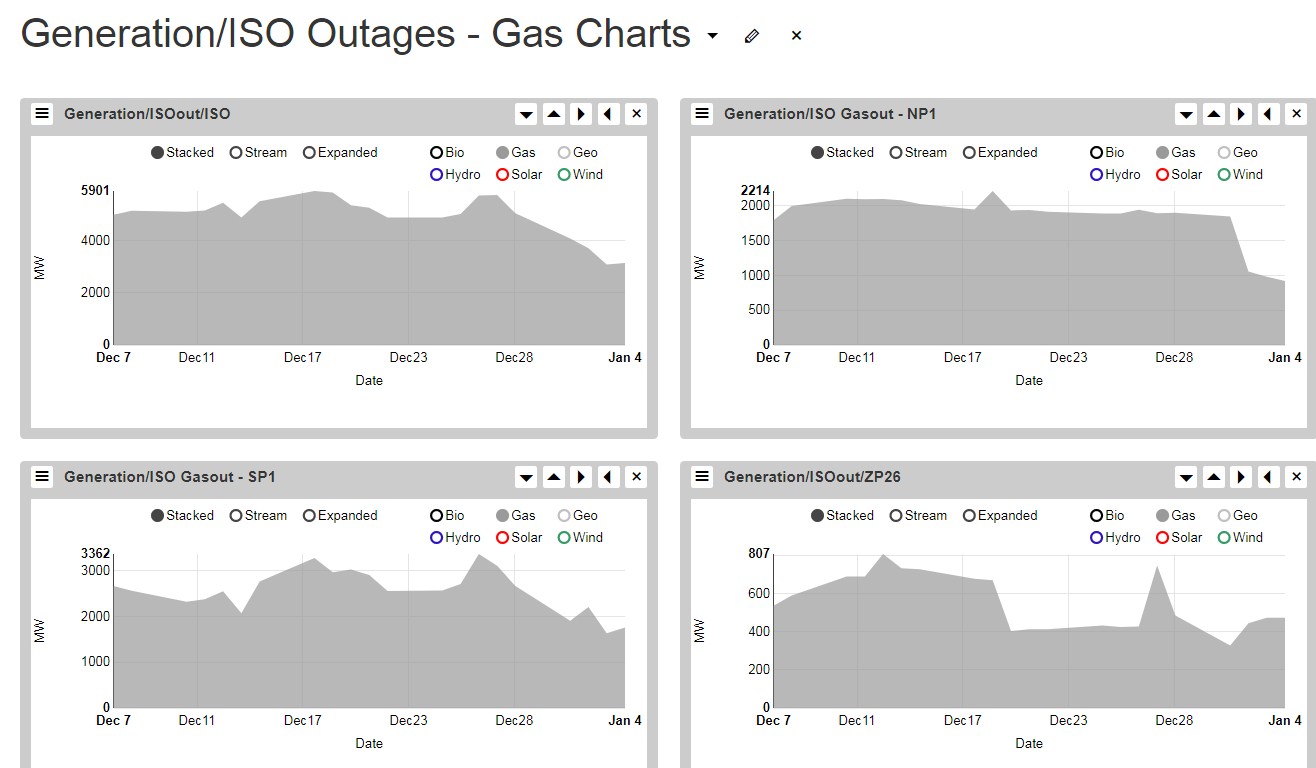 Not Bullish, ISO gas outages, that is; these are in free fall but we’d expect those, at least at Socal, to start rallying in February, when the max planned outages typically occur.

2018 is behind all years, but not by much; typically, there isn’t a lot of planned outages over the holidays because no one wants to work then and odds of extreme cold are high. By the end of Feb, the season’s max planned gas outages are realized in every year. 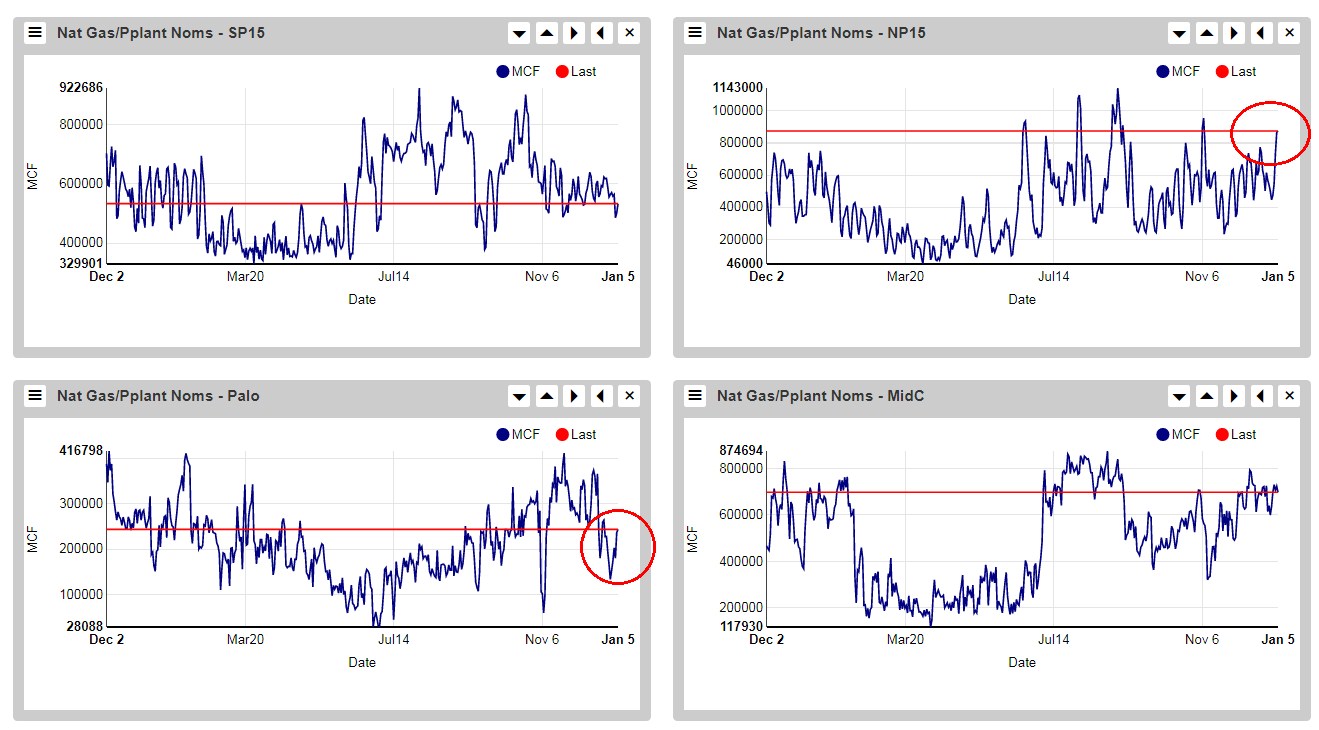 This is somewhat of a surprise; power plant gas nomination rallies in all the hubs but SP. Why would that latter rally, not after seeing its spot gas gap up 33%; instead, SP’s imports have soared.

It seems everyone wants to sell to SP15, except Palo, for some odd reason that hub’s exports into the ISO are also in free fall. And it’s not because they don’t have idle capacity, check out these three plants: 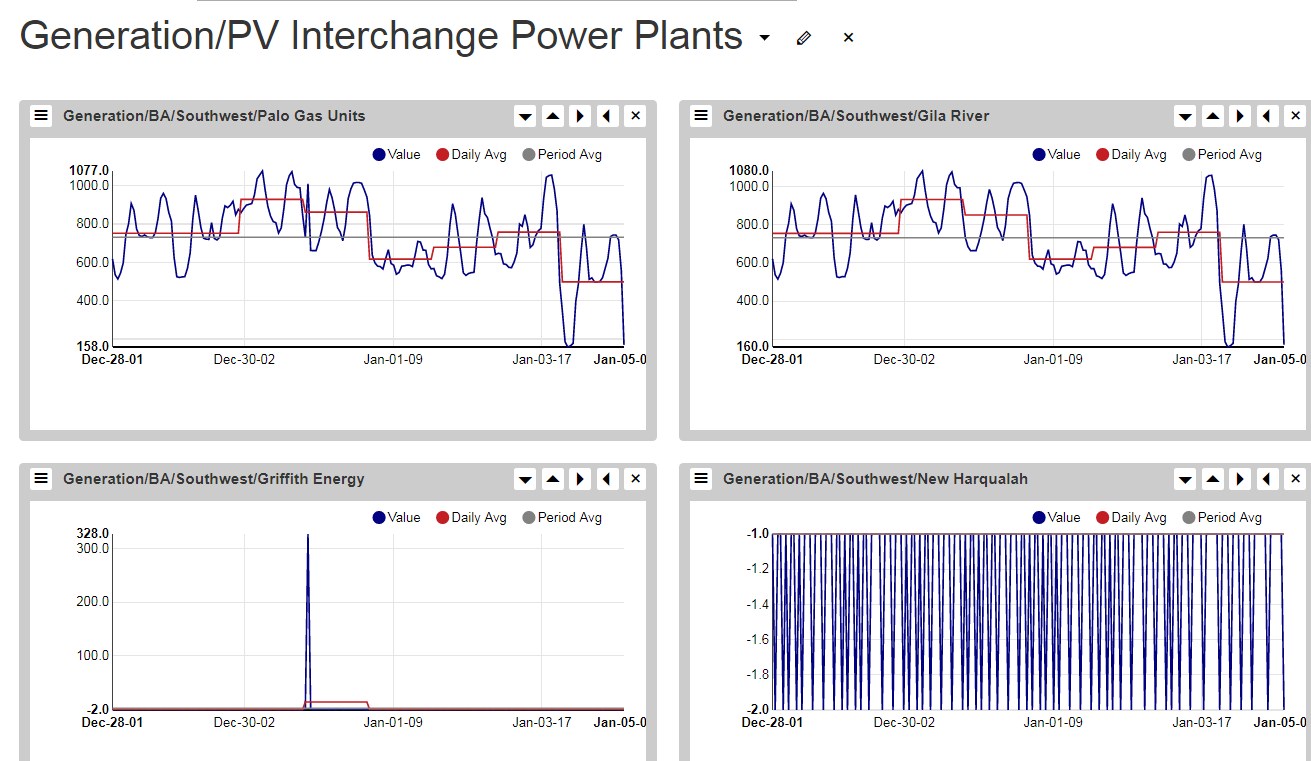 The above is our “Genscape” product; we get hourly production for three power plants, all in Palo. Both Griffith and New Harqualah are 100% offline. That weird graph at New Harqualah is driven by Station Service, each time the plant operator microwaves another burrito loads jump.

California stays somewhat wet, but compare the totals to average; the state is still receiving about half of what it usually would get. Interesting that Burbank is forecasted to receive more precip than Lake Tahoe. This rain will crush the solar output and do nothing to hydro. 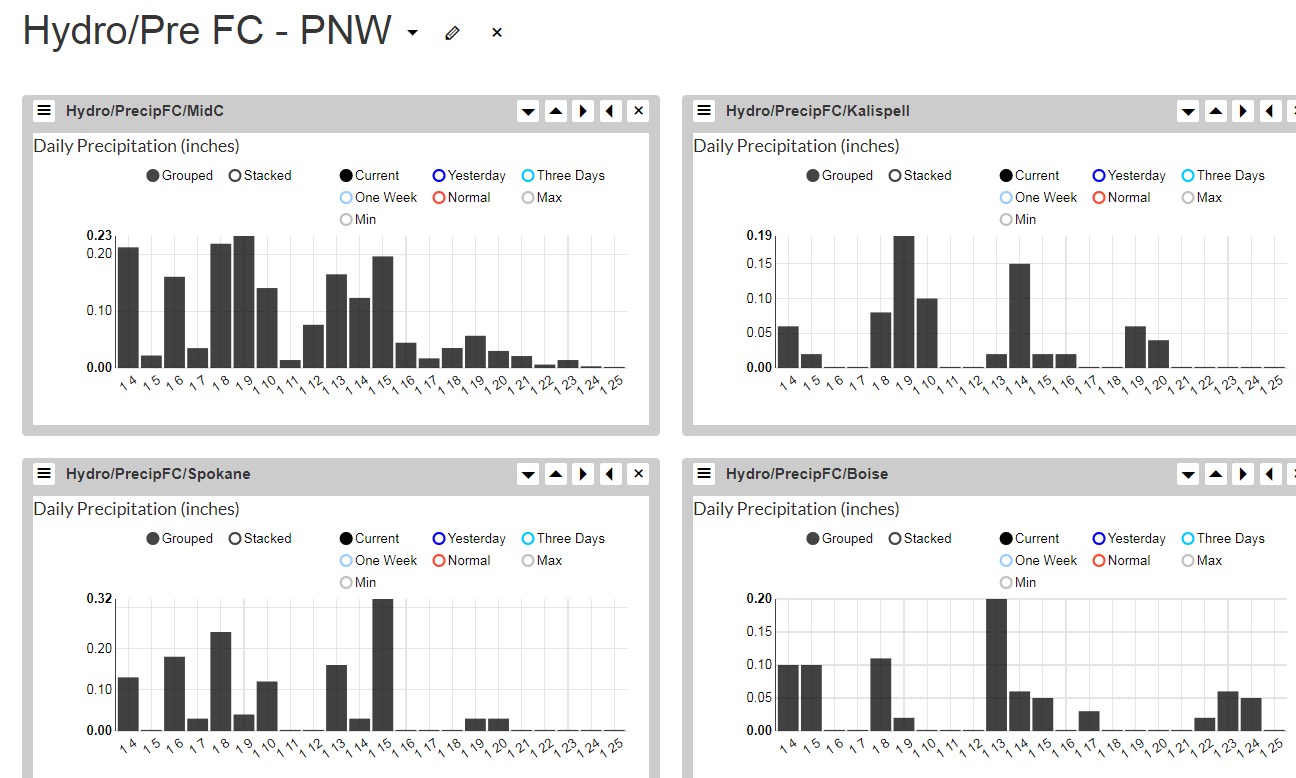 The Northwest is not as dry as it was on Tuesday, but in no sense of the word “wet” is it wet, yet it isn’t dry, either. We’d guess that this 15-day outlook is about 50% lower than average, and that is an important fact going into to next week’s Flood Control release. Most likely, the NWRFC will be posting TDA’s around 100% which should drive a GCL target elevation of the mid-1240s. That’s our bet today. We think water supply is more bullish than that, our models say mid-90s and we agree with them, but for now, the Corps of Engineers isn’t basing Flood Control drafts off of Ansergy (weird, right?), they use the NWRFC.

Reservoirs are either average or slightly below in the Northwest and Canada, and even now California is not at the Max (which was set last year).

Some significant regulation changes at Libby and Dworshak, both saw big cuts in outflows. Flows at Ice Harbor (Snake) are down, but oddly, flows at BON (the dam) are up.

Maybe not oddly, flows at Coulee are up because BPA drafted the reservoir; apparently they see no threat of cold and drafted for dollars.

A passing comment on Tuesday’s STP is warranted. Check out April energy numbers which are on pace, as of the first week of January, to set a record. Hah! We don’t think so if anything; the April will be revised downwards if this dry weather holds. Also, take note of the 2017 forecast released last year; they had April as one of the dryer ones on record and look what ultimately took place – Portland  almost ended up in Sydney Australia. 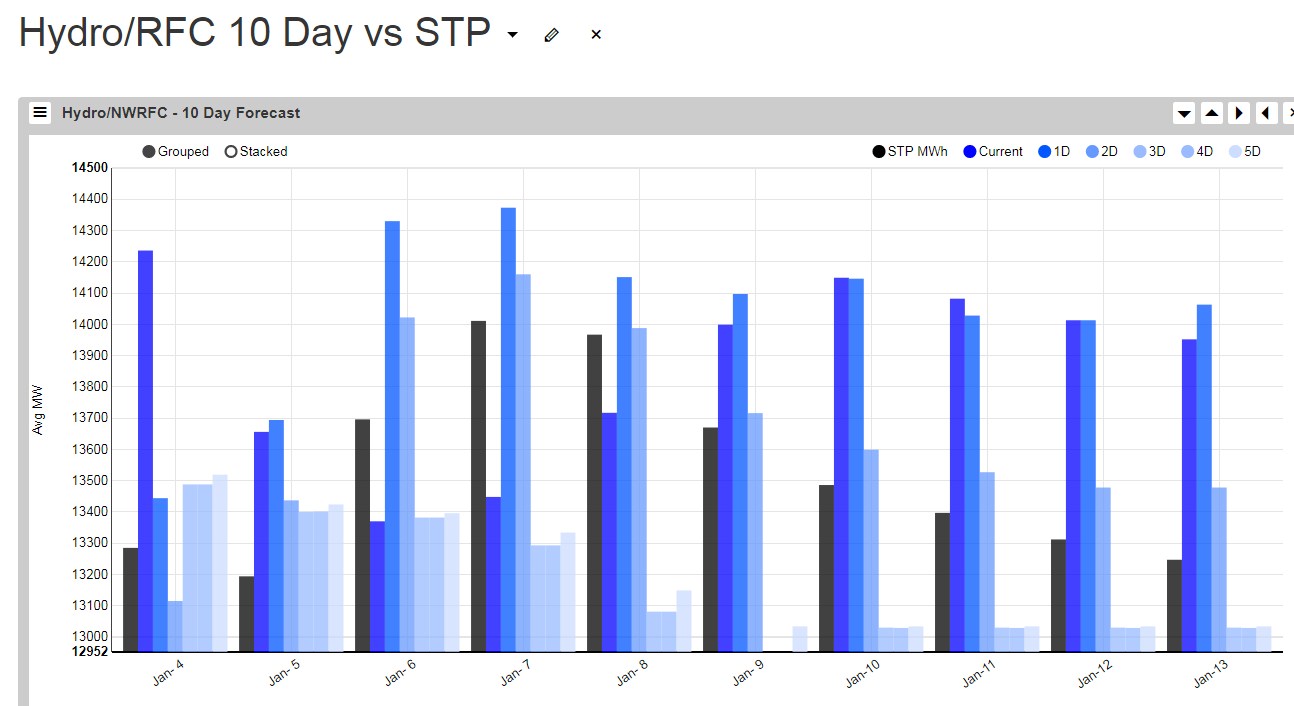 Forget the weekend cuts; the RFC does this every week to reflect weak weekend loads. What Caught our eye were the deltas in the back of this to both the STP and the forecasts last week; that is a 1300 aMW bump on the 9th of January. Bearish.

The most important table of all, Snow Water Equivalents (SWE); the Northwest upper Columbia stations are all above average now, and California is struggling to hold a 40 handle. But note the decays over the last week, all the Northwest stations are down from last week.

No one should be surprised, but now it’s official – The DC line is going down next fall. Just yesterday, BPA updated its outage schedule for the line.

We think the forecast is more bearish than not, but we’ll look to the market prices to sway our buy/sell opinions – that post to follow.