OK, that’s behind us, the holidays, that is. You can divide the universe into two groups: those that love that string of days from Black Friday to New Year’s; and those that despise them. You can often divide the group along gender, usually. Maybe a digression, but is that not true?

On to the markets, West that is. While the east coast suffers under extreme cold, the west yawned its way through the long weekend. The only suffering on the west coast was from watching its football teams lose every game in a terrible way. The power and gas markets are similar; the cold has rallied the Nymex while the west hubs are mired in a minimal-demand reality. 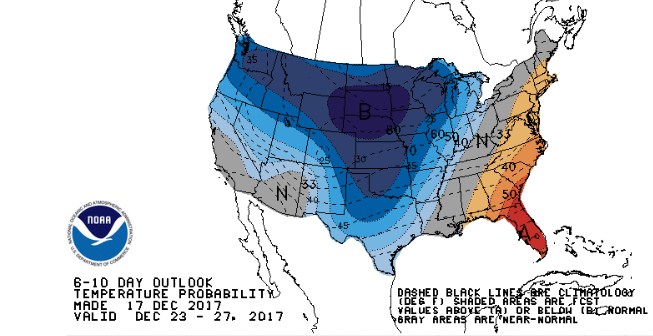 Just before Christmas, WECC players were looking at some chilly weather, now look at it:

Not pretty, just is what it is. We’re seeing gas demand decay almost as fast as your children’s love for their Christmas gifts: 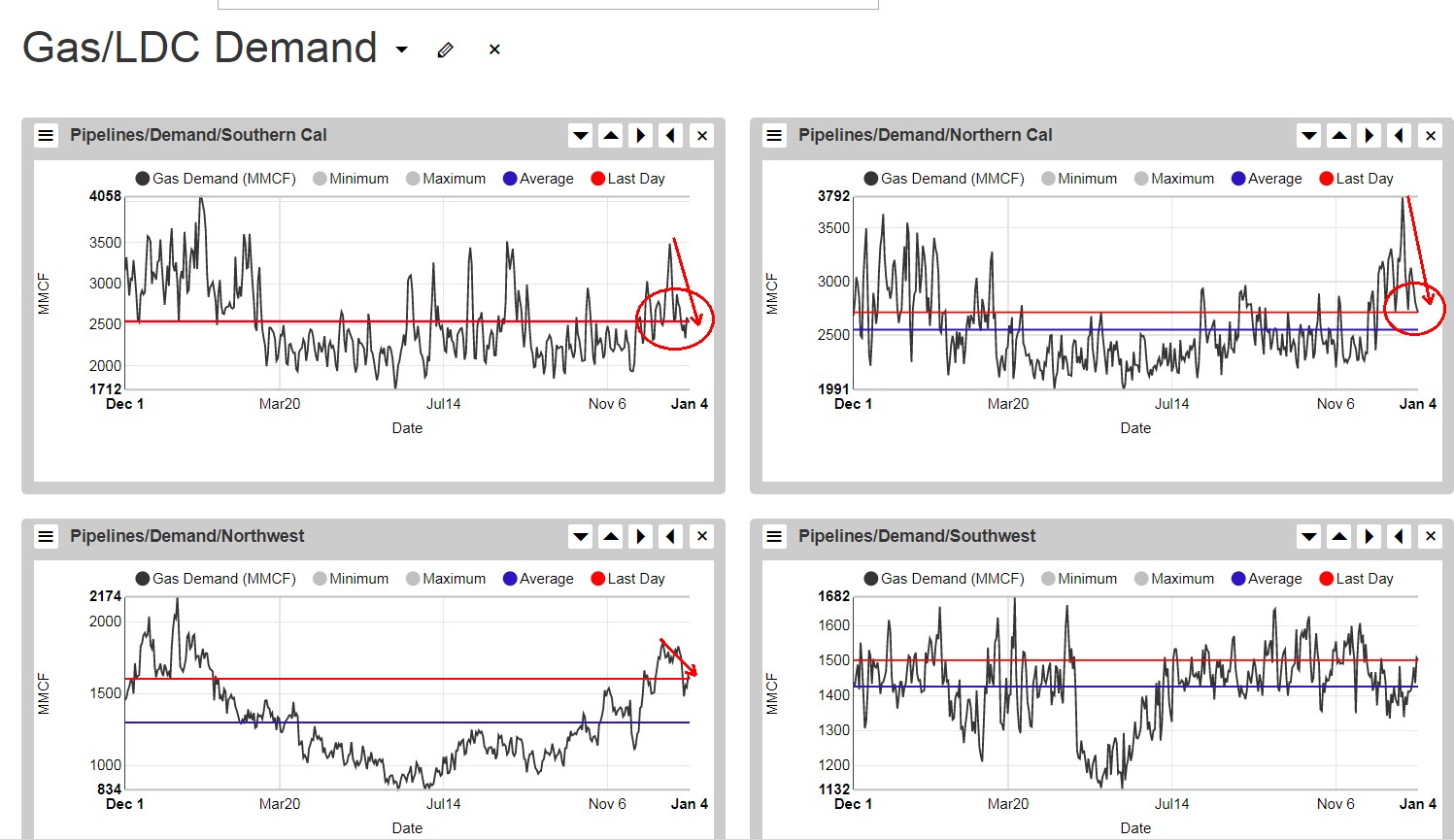 The most significant change brought by Santa was the return of the Transwestern gas to Socal, and now the spreads have collapsed:

Premiums, what premiums? Socal Citygate is nearly at par with PG&E Citygate. The silver lining, for longs, is the rally in outright gas prices: 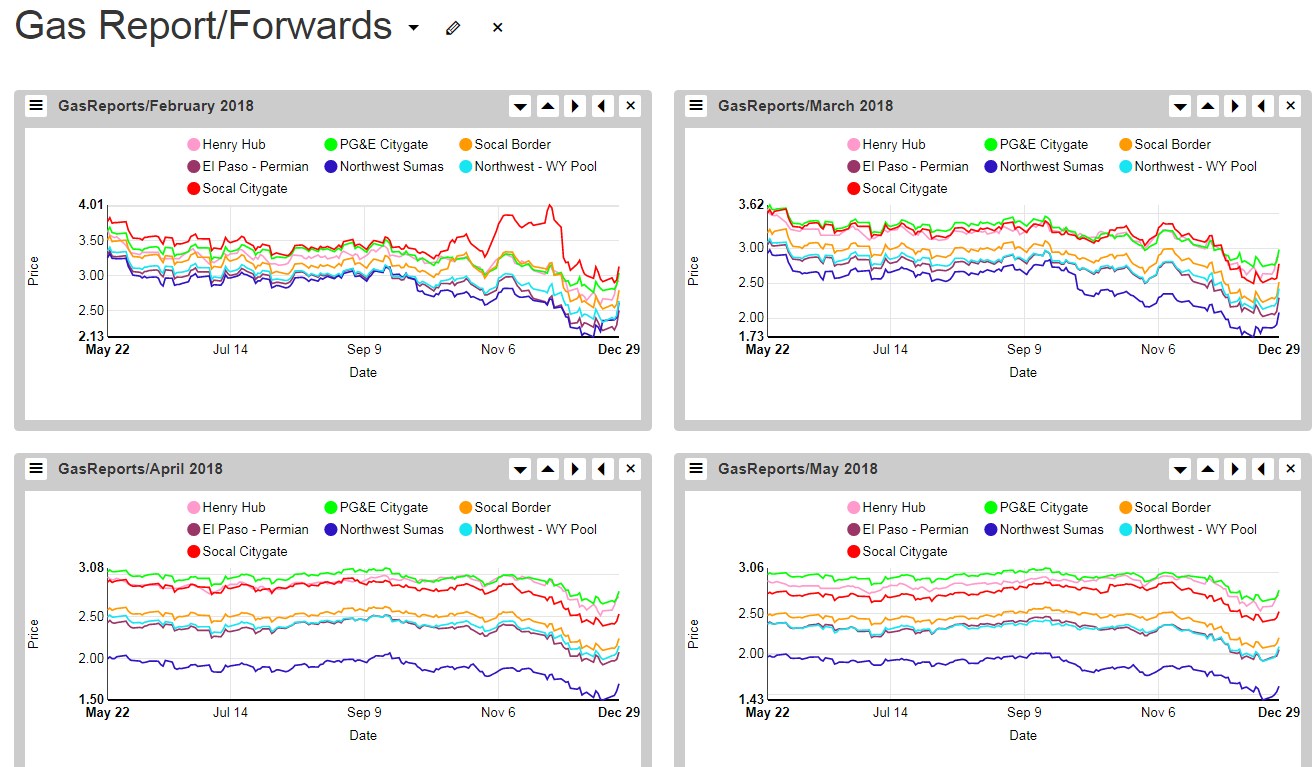 Every hub has ticked up, all driven by the Nymex rally 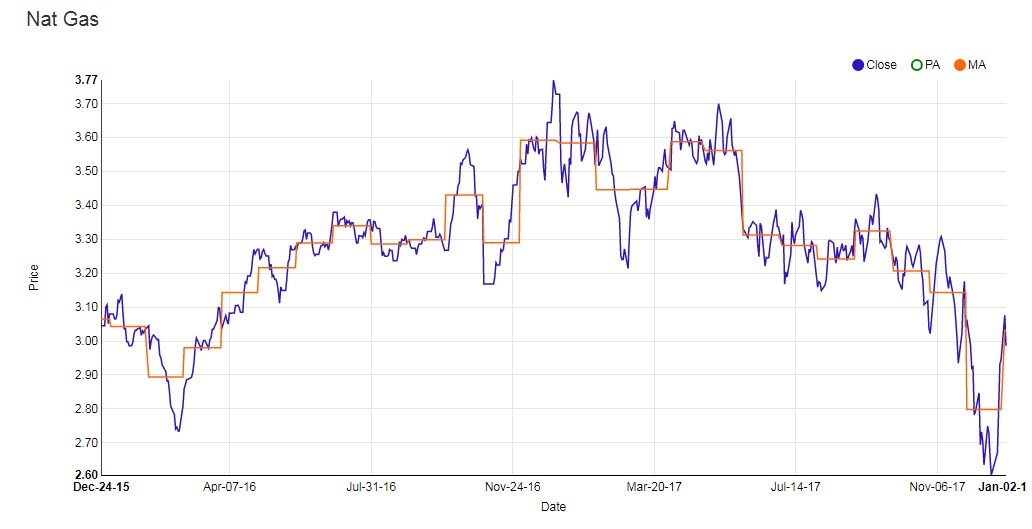 The last two weeks qualify as the most prominent Nymex move in the last year; a gift to those naked long, but note the change in west hubs was not as sharp as the futures rally meaning basis took a hit. 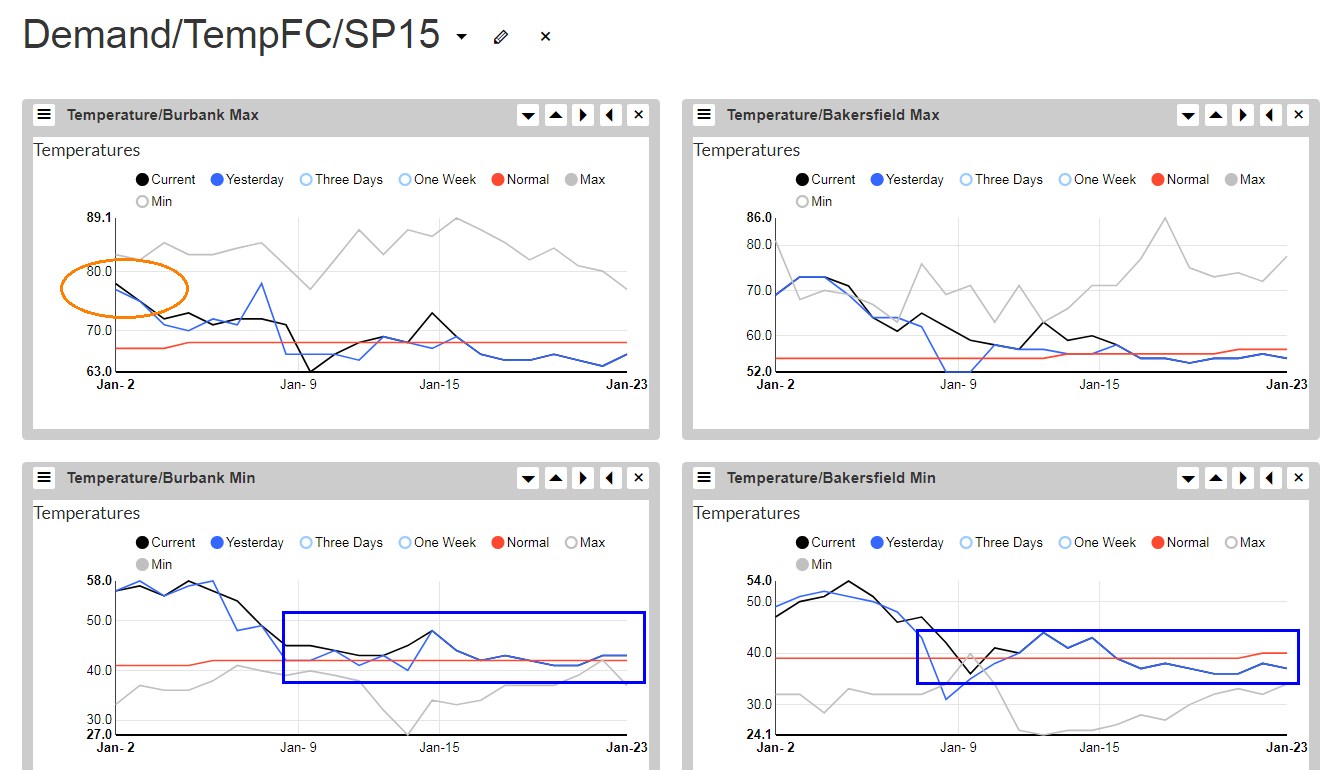 The LA Basin shows hints of cold weather, but first, it must work through this week’s lovely weather, though not so endearing if you are looking for heat rate rallies. 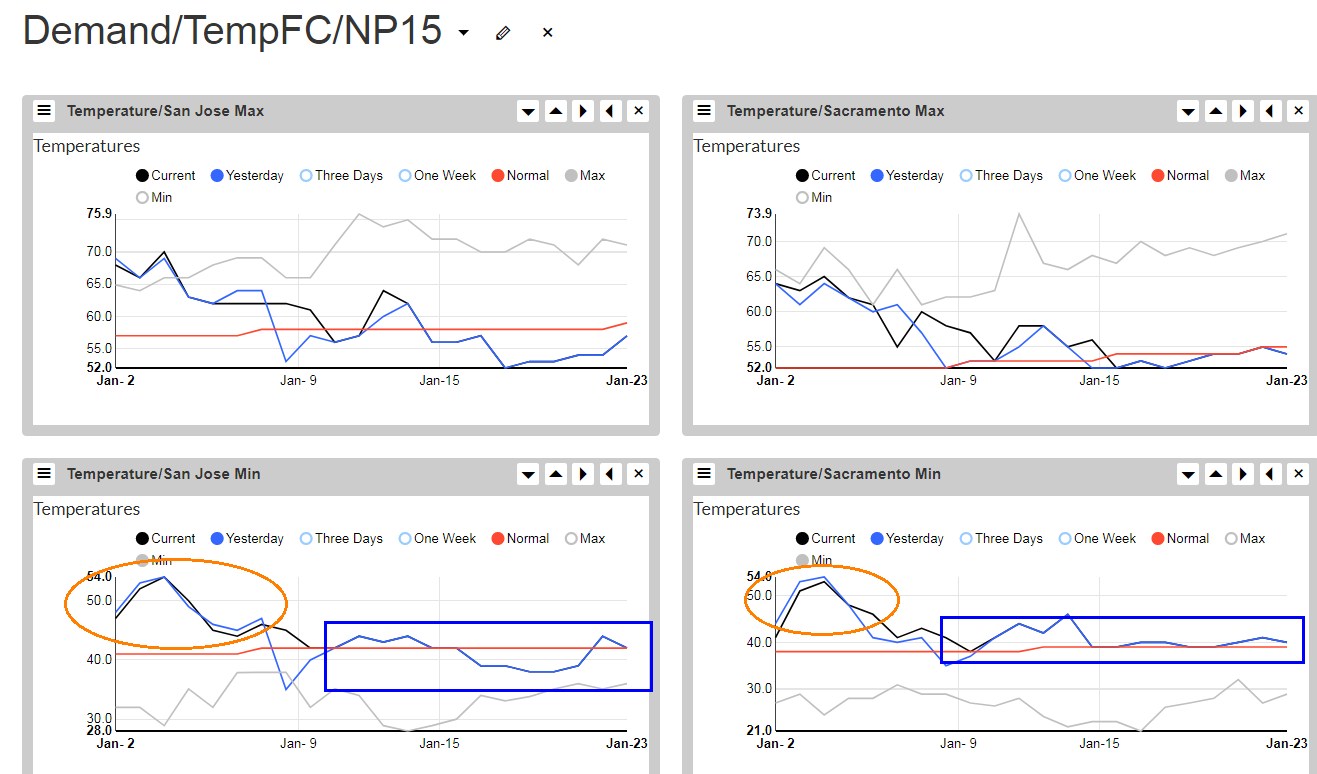 A similar picture at NP, warm up front and hints of cold in the back. 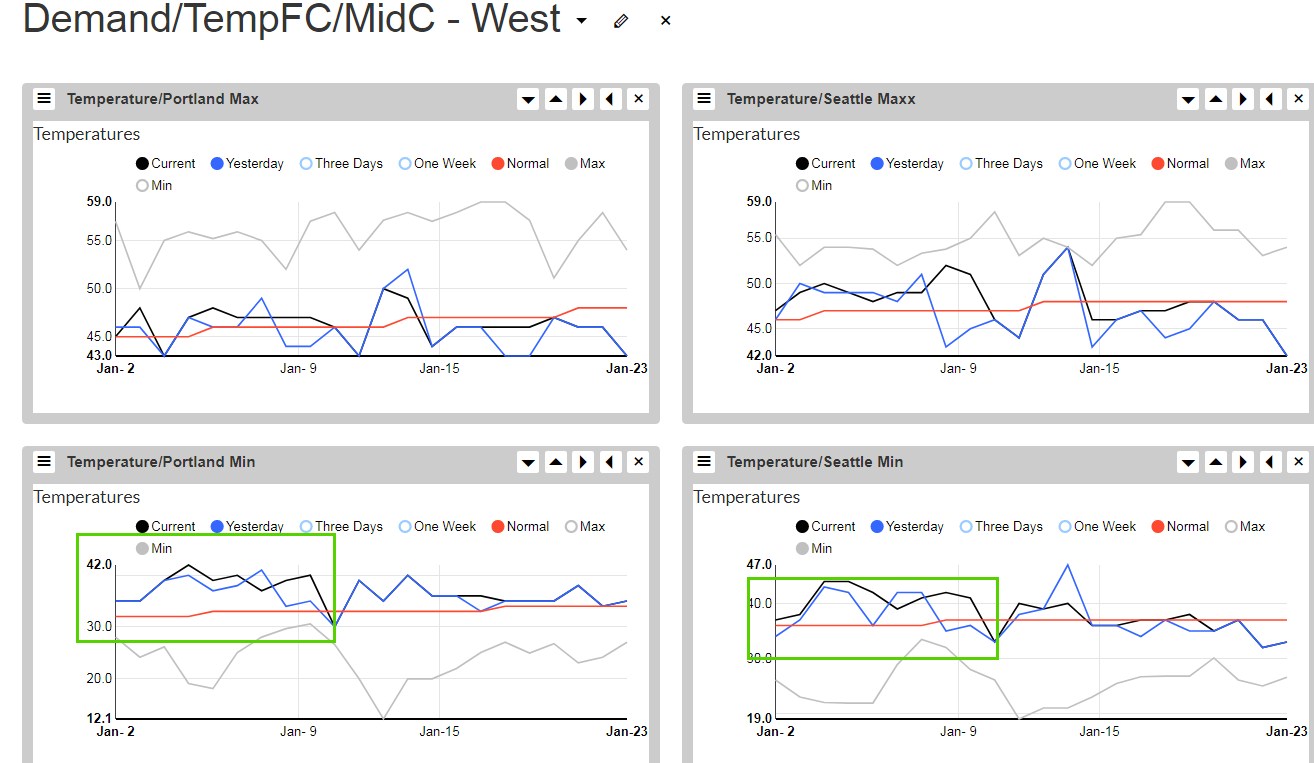 The Northwest outlook is just average, but do note the climo line is starting to tick up; the winter clock is winding down, it’s now January. There is still hope for bitter Siberian-type cold, but the odds are fading with every week. 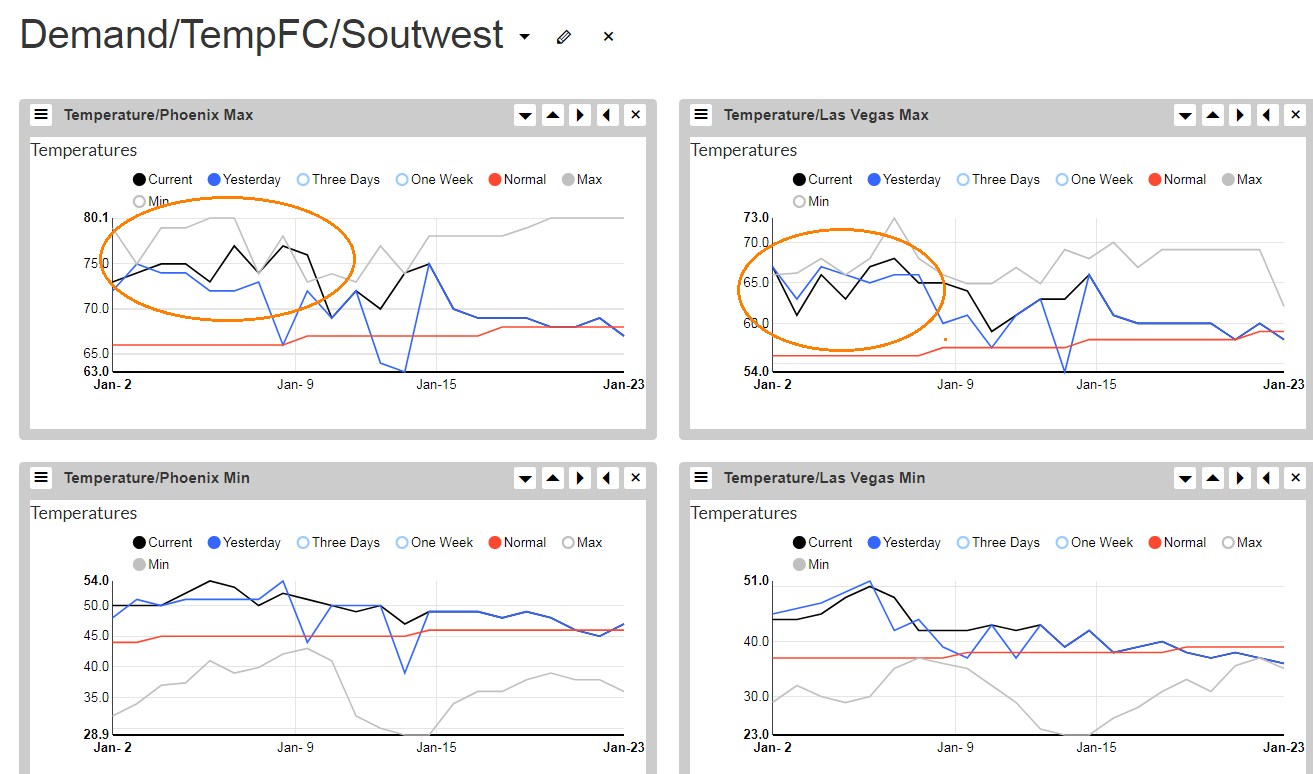 Planning a vacation to AZ? Right call, the weather is perfect for golf but not so much for long PV BOM positions.

Realized temperatures confirm the dismal holiday outlook, except for the far east, like Billings, MT or Denver, CO. The rest of the WECC was either average or warm. 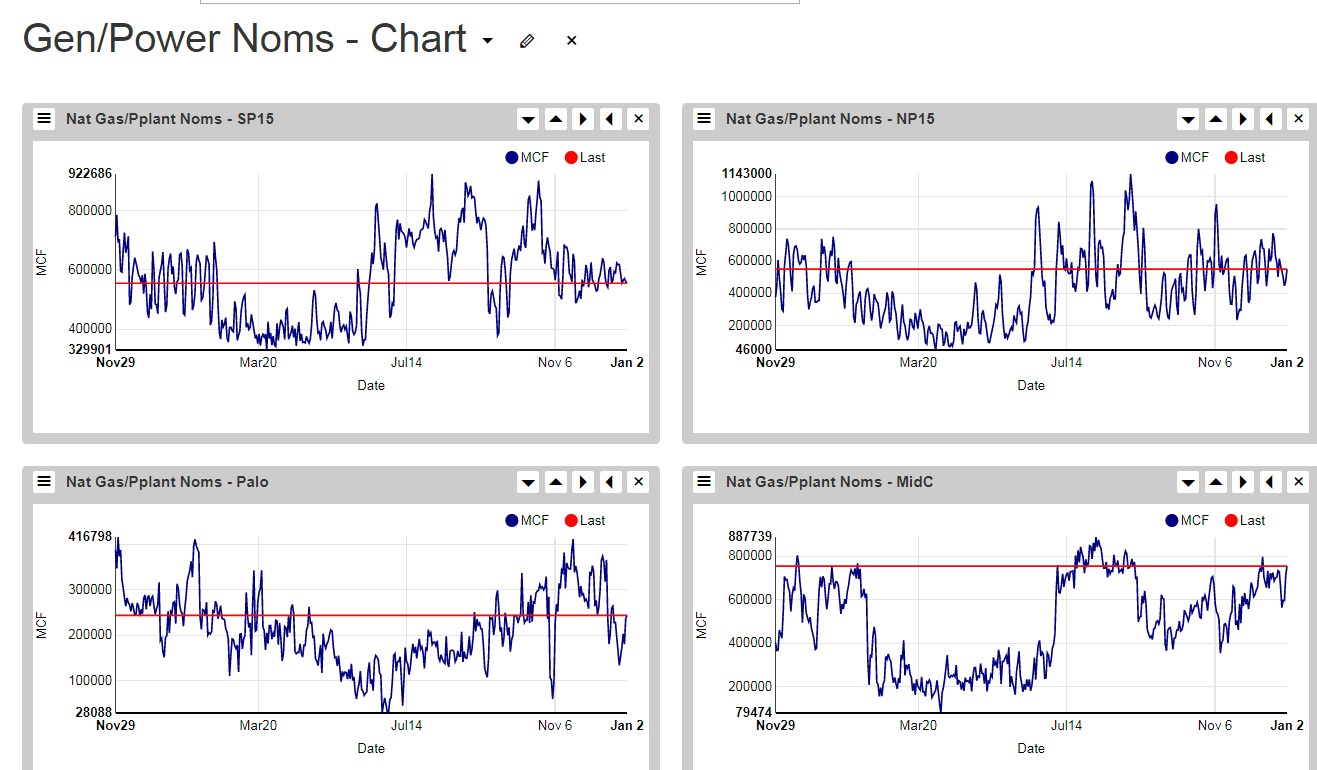 Aside from the Mid-C, gas nominations across the west are off; the MidC is interesting given that demand has been relatively weak and expected to grow next week. 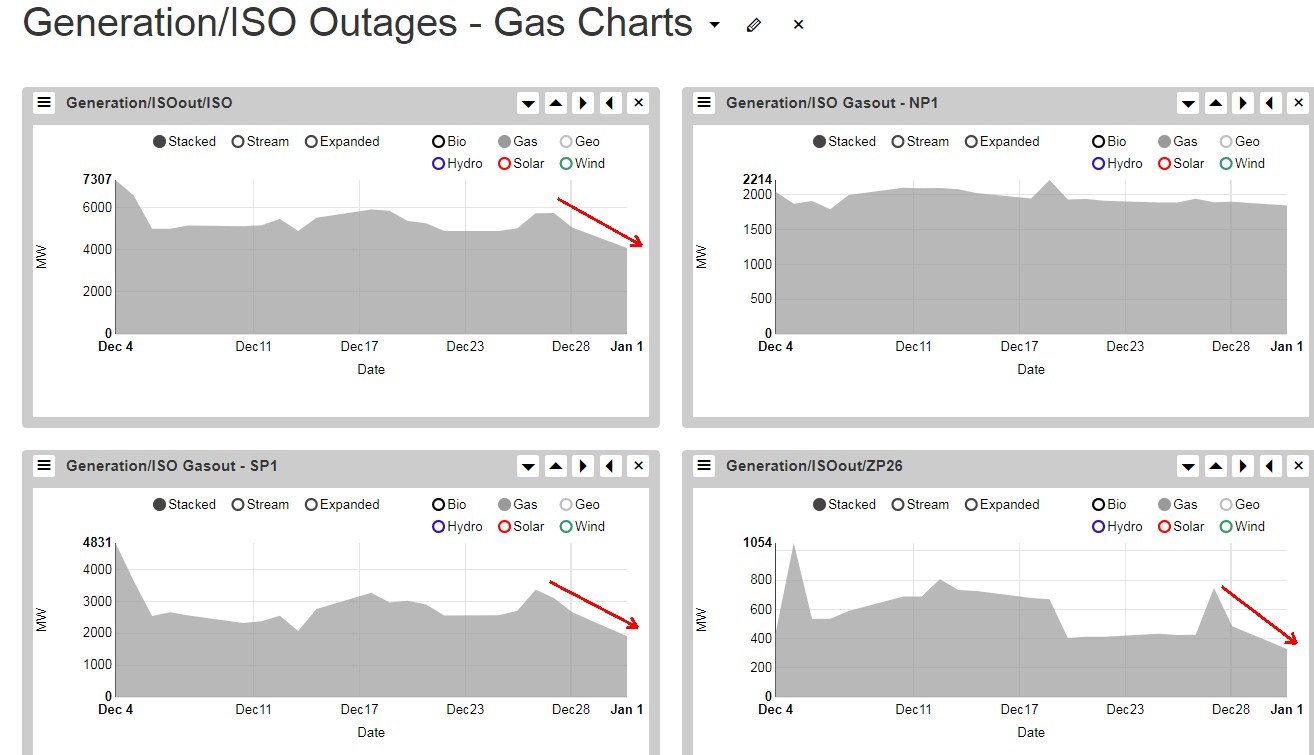 Salt in the long’s wound; outages inside the ISO have taken a tumble. 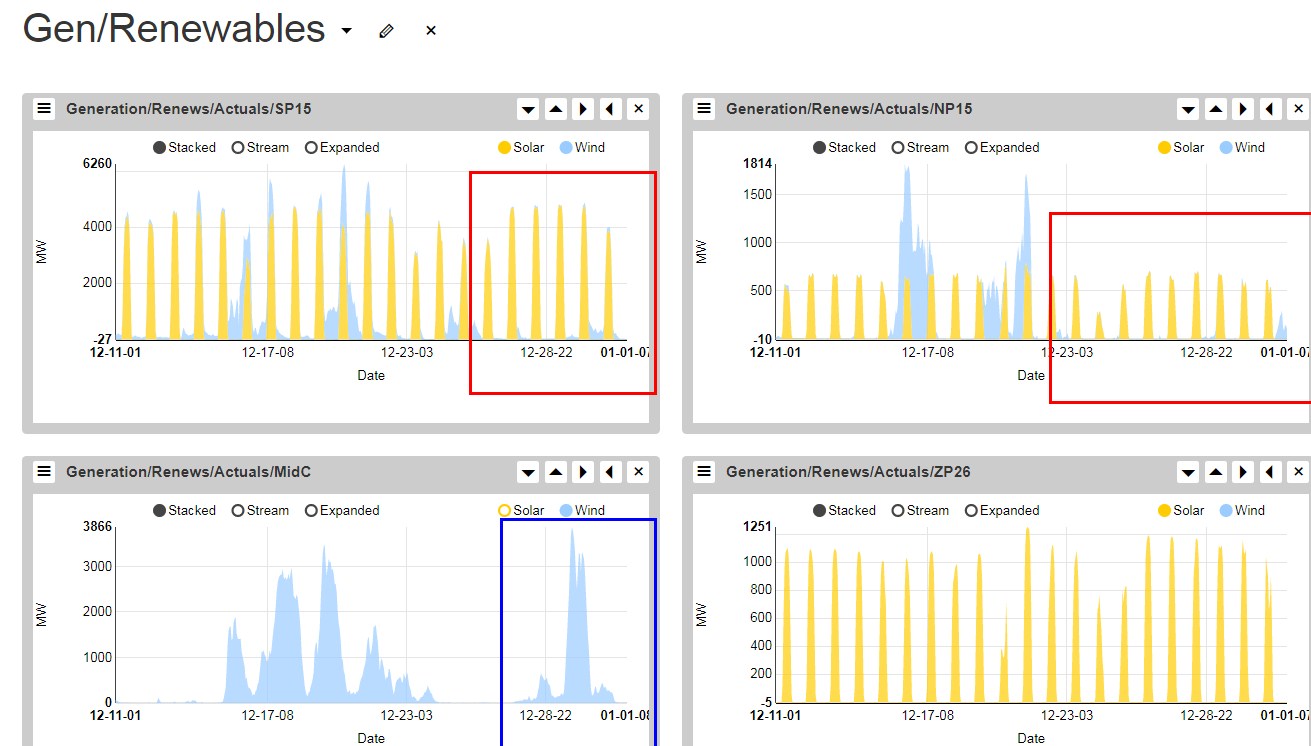 A lack of wind in the ISO helped support prices; California has barely registered a MWH of wind energy over the last week. The MidC realized a surge, over 3000 aMW for a few hours a few days back, now nothing.

The outlook for precip is changing; the Northwest is entering a modest dry spell, and California is poised to get a decent dump:

This is the first time we’ve seen more than an inch at Lake Tahoe in a month. Not biblical, just normal, and the state needs it given the current snow levels are about half of what they should be:

The Northwest is mostly above normal after some big upper Columbia storms passed through, but note how quickly some of those anomalies have fallen in the last couple of days. They will fall further with today’s precip outlook: 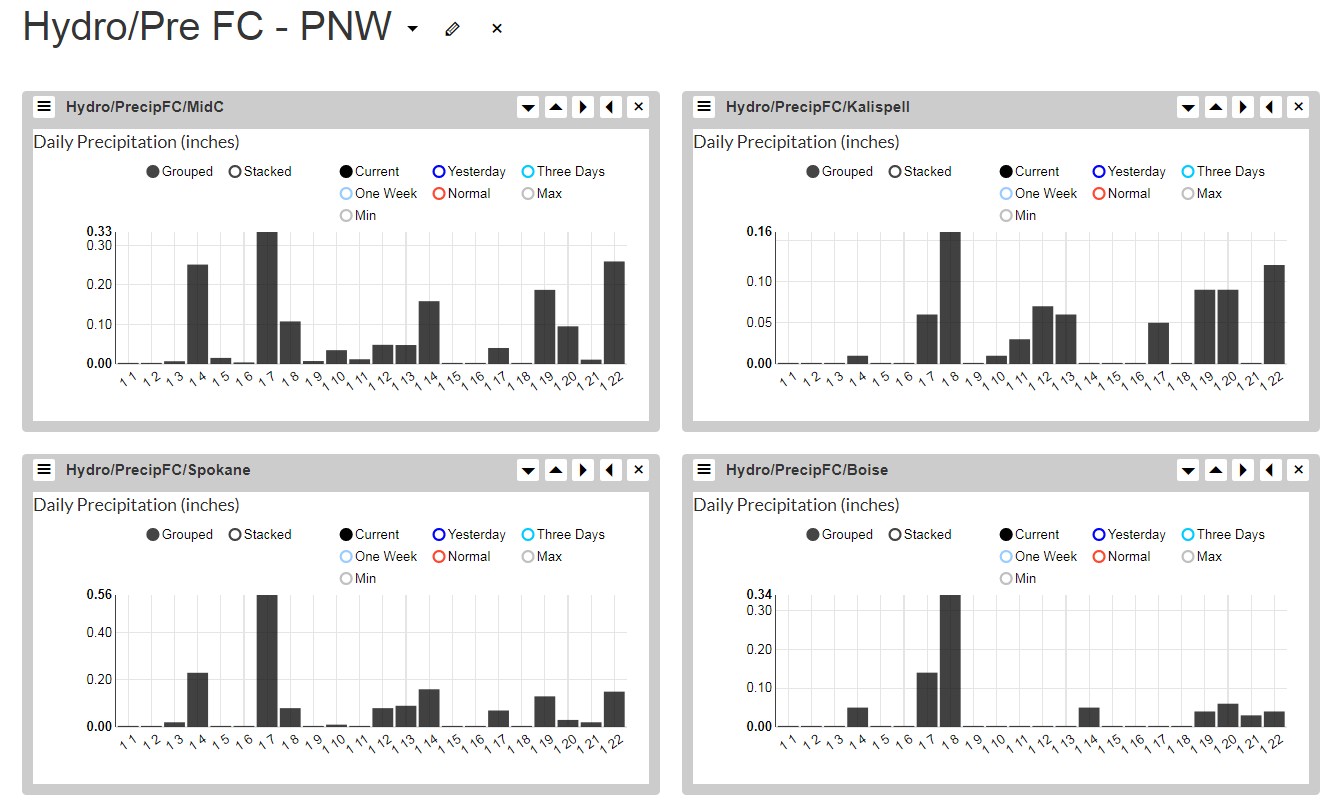 These aren’t showing zeros, but all three critical Mid-C stations are below average. Some of that dryness will be picked up in next week’s Flood Control water supply forecast, but that number most likely will be in the high 90s: 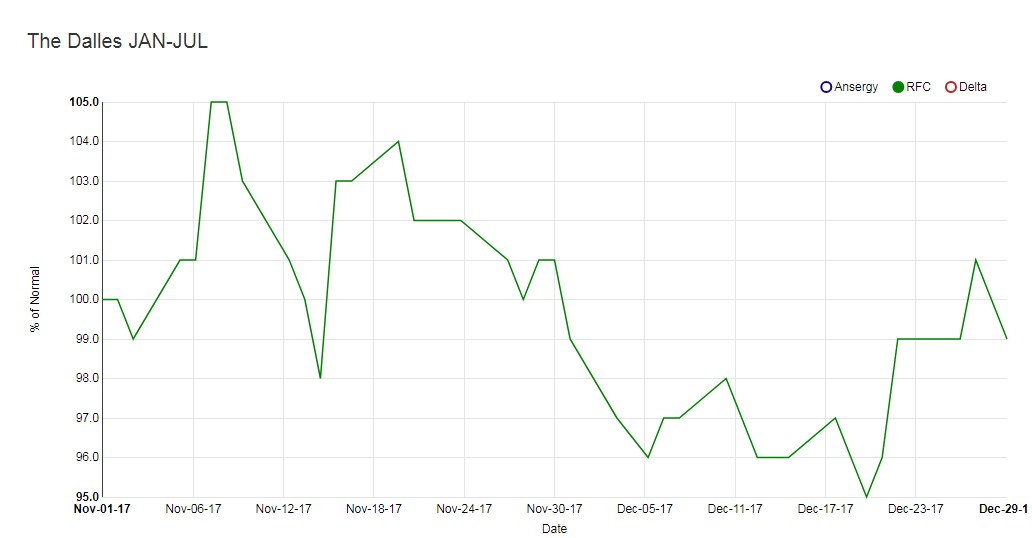 So what does that mean for drafting? Look no further than our recap of the last 20 years of draft targets: 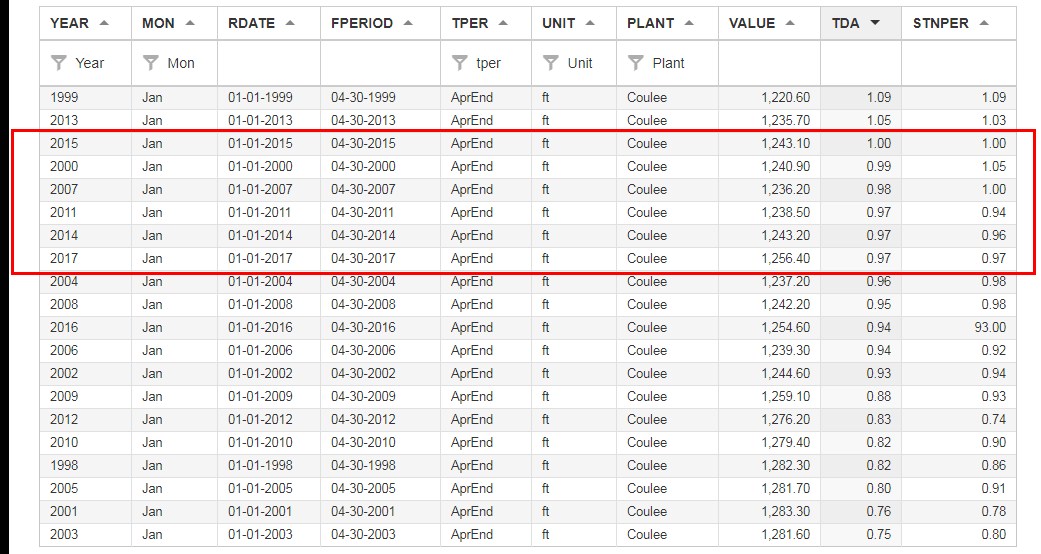 Given a water supply forecast of high 90s, we can expect a Coulee target elevation of between 1236 and 1256; at least that is where January target draft was set in prior years. We’d suggest a word of caution, however, in expecting drafts into the 30’s. First, BPA hates being forced to draft; it isn’t good for their economics. Second, the outlook is dryish, and we think the RFC’s water supply number is on the high-side. Our guess, today, is a draft target of 1250′.

Outflows at Coulee are up, week-on-week; mostly from a draft as the reservoir got tippy-toppy full over the holiday; more full than BPA wanted given the weak demand. Interesting the pond filled without any cuts in discharge, confirming the weakness at the MidC.

Arrow continues drafting with no shaping, just pulling 50kcfs a day out of the pond. Flows at the border are shaped and are bouncing along the five-year lows.

The California rivers aren’t seeing much shaping; we posted this dashboard to emphasize the delta between current and max; all of those max flows were set last year.

A year later the impact of WY17 is still felt in California; energy production remains well above the five-year average.

Minimal shaping is happening at Bonneville, and none at Ice Harbor; that project was cycling hard until this weekend, then discharge went flatline.

A new DC outage popped up this weekend:

Just for a few days, but the line goes to zero. That doesn’t change our outlook for June-July but is worth watching.

BC has been a steady seller into the Mid-C; the DC is mostly full, but the AC has a lower line load factor; the flows out of ZP have lessened, more energy flowed north than south. Palo flows into SP are off. I guess SP can now fire up its own generation now that Needles is back.

Weak this week, strengthening the following week. We doubt Flood Control surprises, but now that we said such, it probably will. More on our market thooughts in a post to follow.