Following our fundamental review, we’ll walk through a few term trades, all Qs, that caught our eye. For this research, we use our APT model which applies a rank to every possible traded product. We use those ranks, and a derivative of rank (change in rank) to cull exciting opportunities.

The first group comes from APT sorted on Rank Ascending. 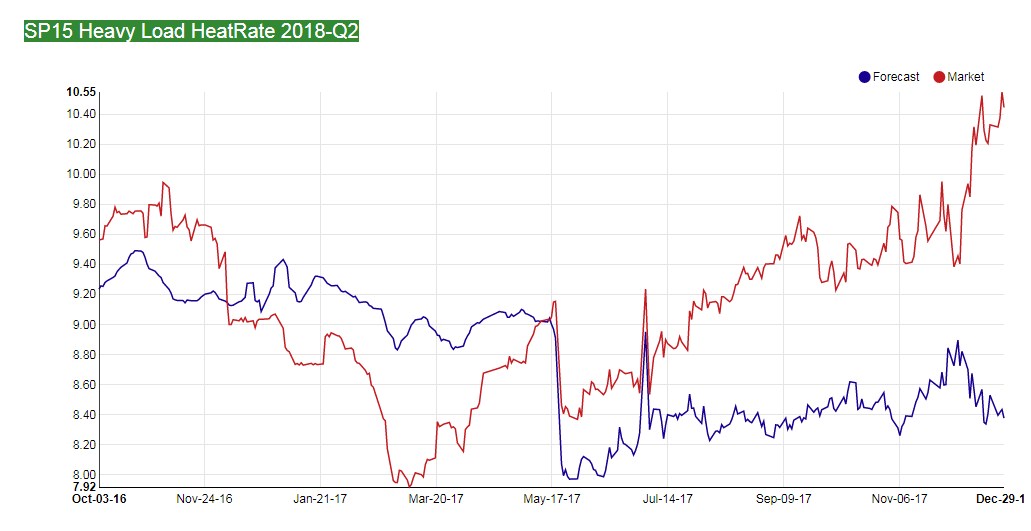 With the return of Transwestern’s intertie at Needles, we’d have expected any gas-related impact of said outage to be removed from forward heat rates.  I’m not sure that is happening, or perhaps the market has become so dearly enamored of the Q2 because of something; what that is have not a clue. The strip is back to a contract high, and the kneejerk response would be short, but those SP shorts have not paid well. 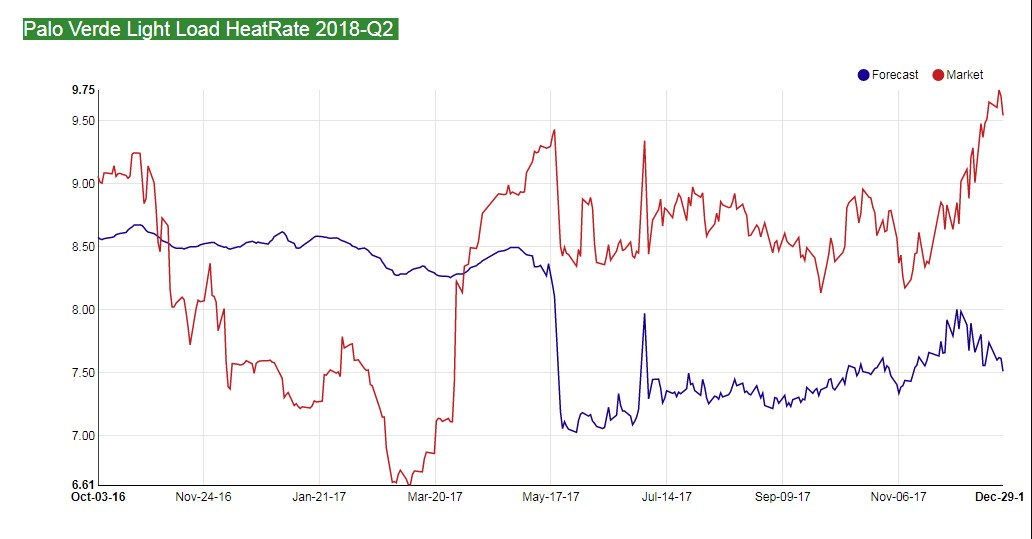 Same trade, just at Palo, and another contract high. We get this, last June may have set the Phoenix highs for the summer, but will 2018 repeat? Just seems rich, has been rich, but trend followers have printed coin being long here; we’d be short. 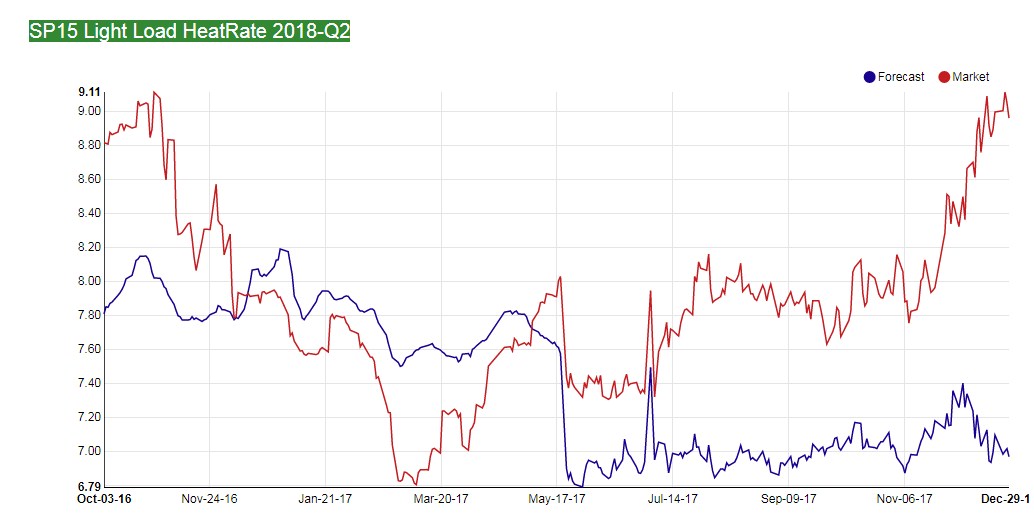 Not to beat the Q2 drum too much, but this is the SP LL and has an identical shape to the HL. Odd, I thought, and am coming up empty for a fundamental explanation of why Q2 off-peak would be so bullish. 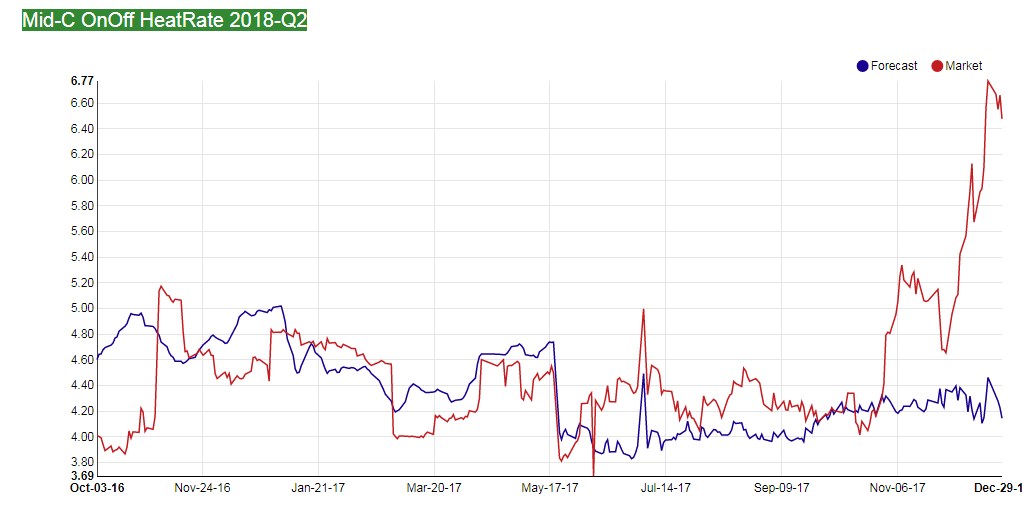 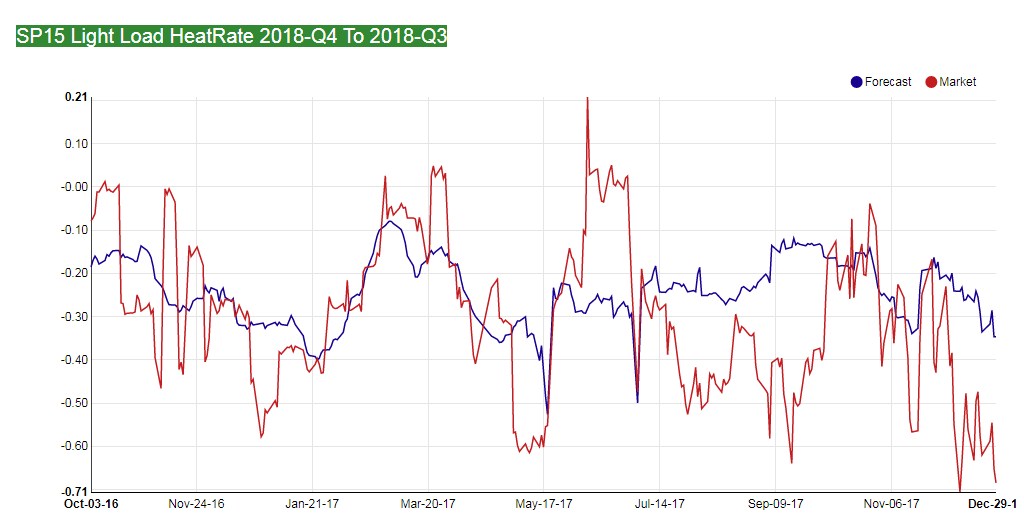 The off-peak SP Q4|Q3 roll is cheap, again. There is a fundamental case to make; the ISO will realize about 1000 aMW less hydro energy next year than it did in 2017 which will drive the Q3 higher; the Q4 should be similar. 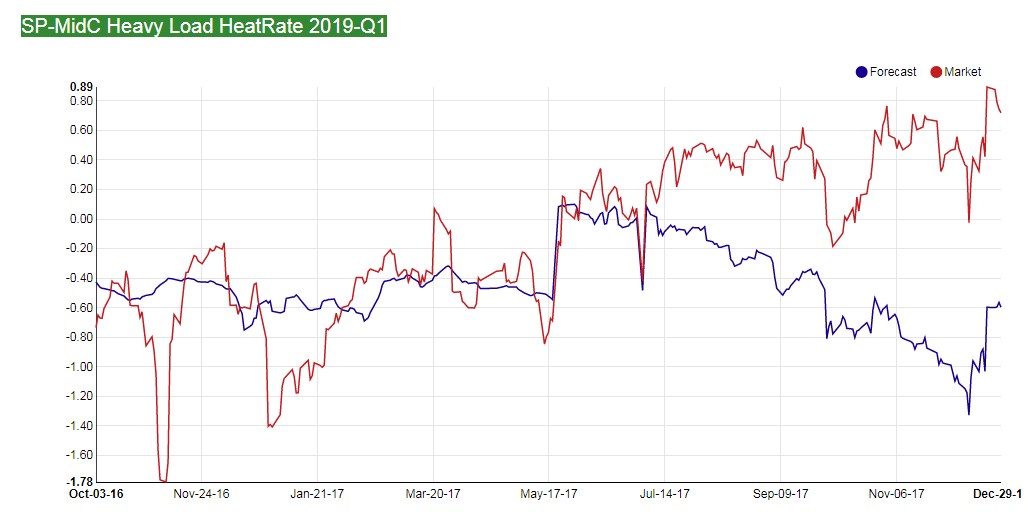 This officially became the “prompt” Q1 today and is trading just off from contract highs. With Needles back, we’d be comfortable shorting this at these levels, especially given the cold and dry outlook in the Northwest. 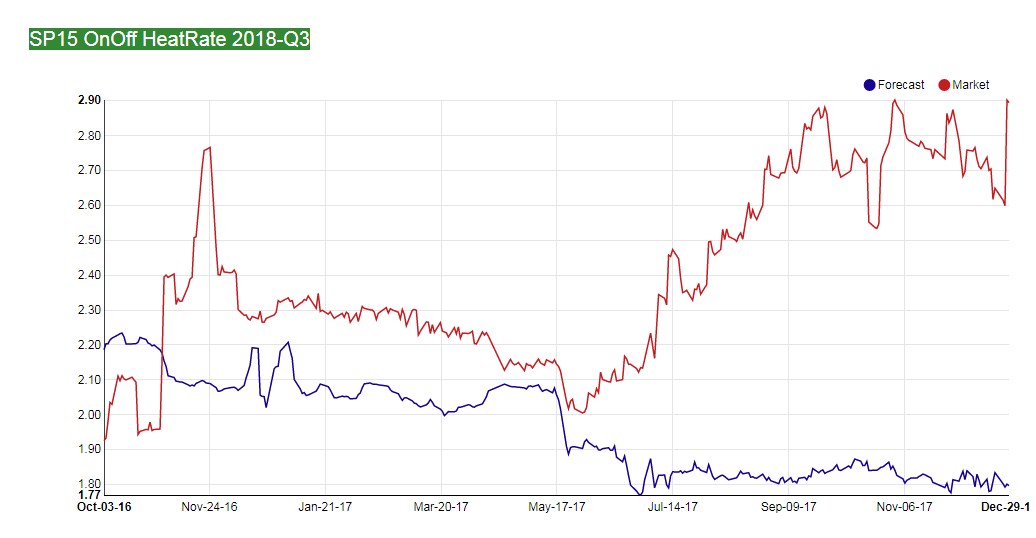 This On|Off enjoyed a big move over the last couple of days, probably driven more by a change in gas than power price. The problem with on|offs is you’re effectively selling calls, never an easy trade. 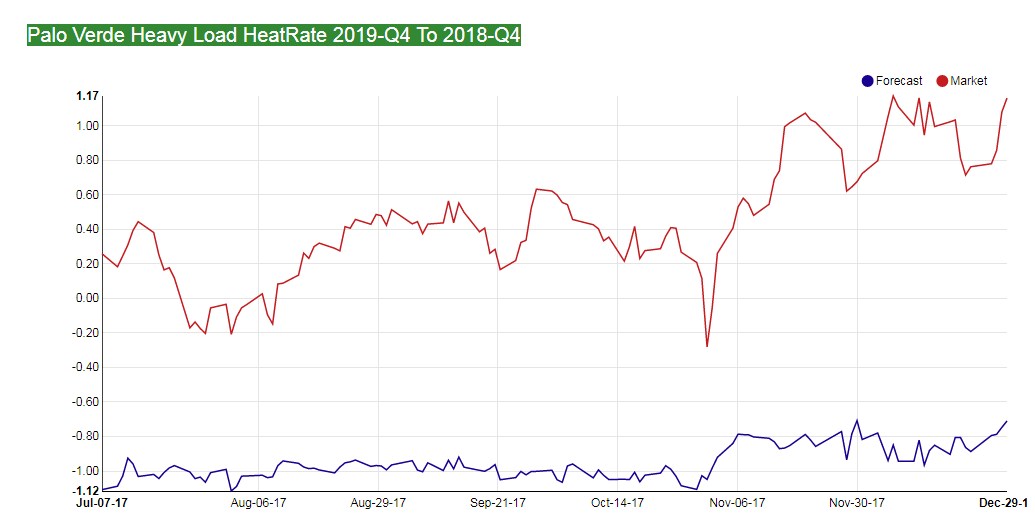 This is a year-on-year roll, and note the upward sloping market line. Contango markets seem possibly out of place for a load-decaying WECC. 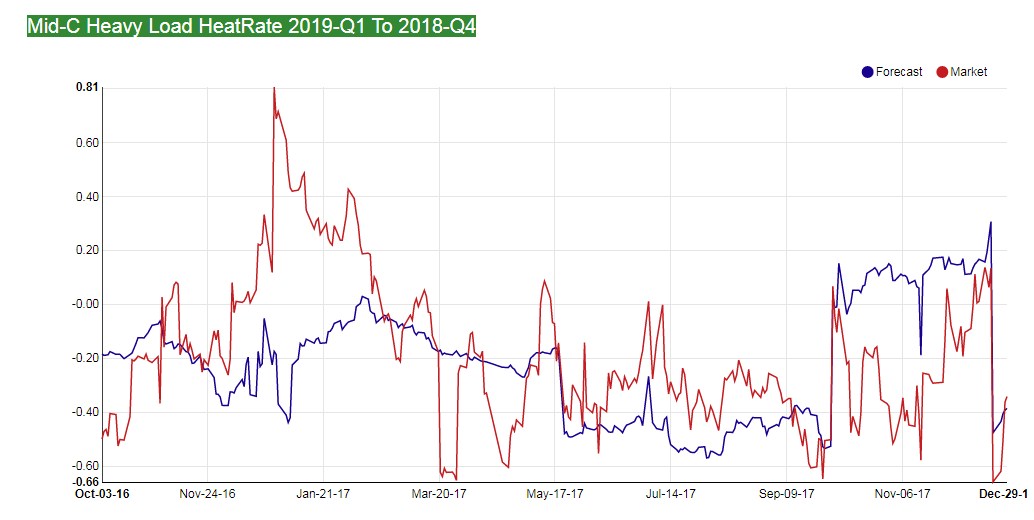 The Q1|Q4 MidC roll has tanked, then slightly bounced. We don’t have a fundamental bias for this; it’s posted because the chart is aberrant. 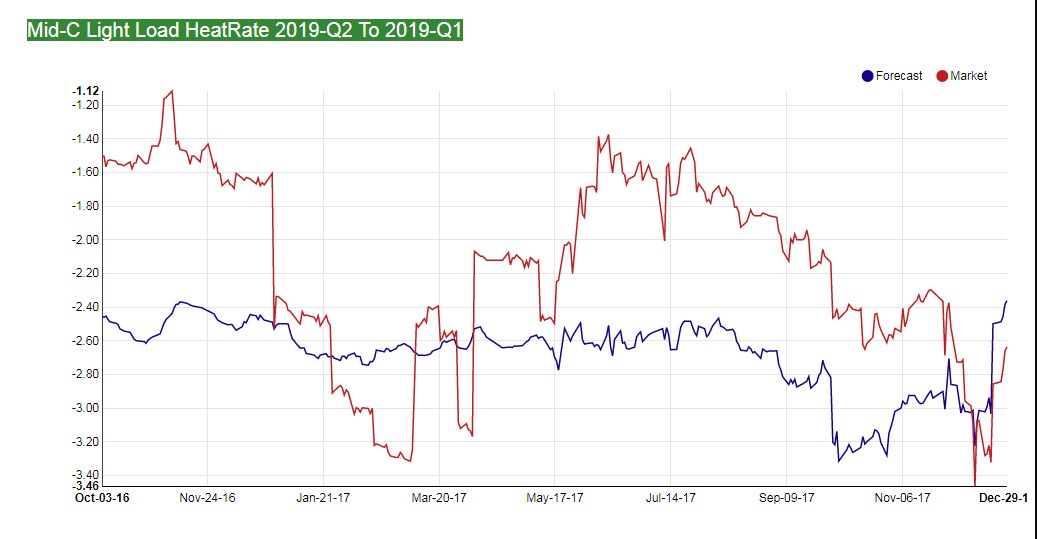 This trade was found by sorting on WOW ascending, putting the most significant changes in rank “falling” at the top. After hitting a contract low, the roll has soared back to value. 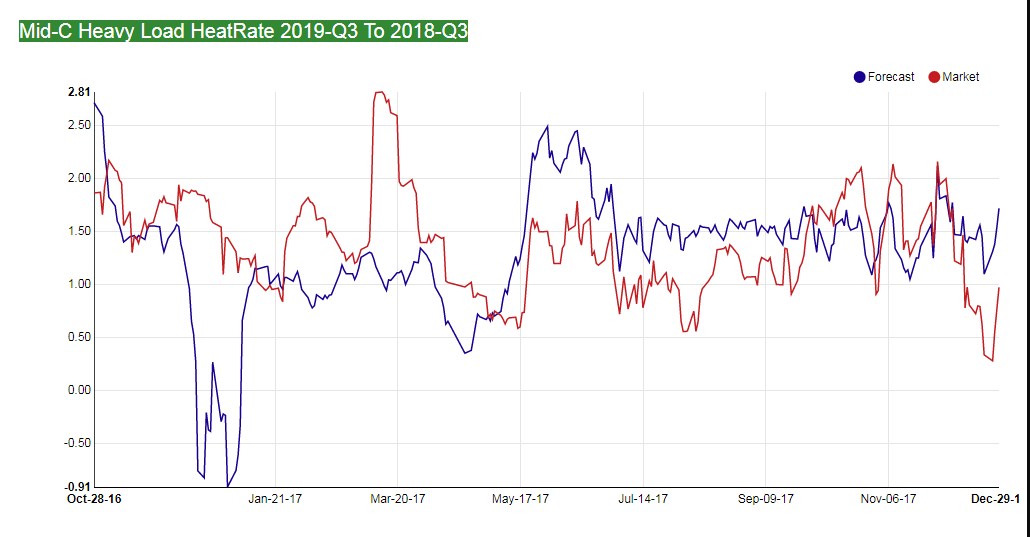 This YOY roll cratered, now has rallied and probably has more room, especially if WY18 checks in at below normal.