The front, defined as Sep and in, has a few interesting opportunities, let’s see if you agree. 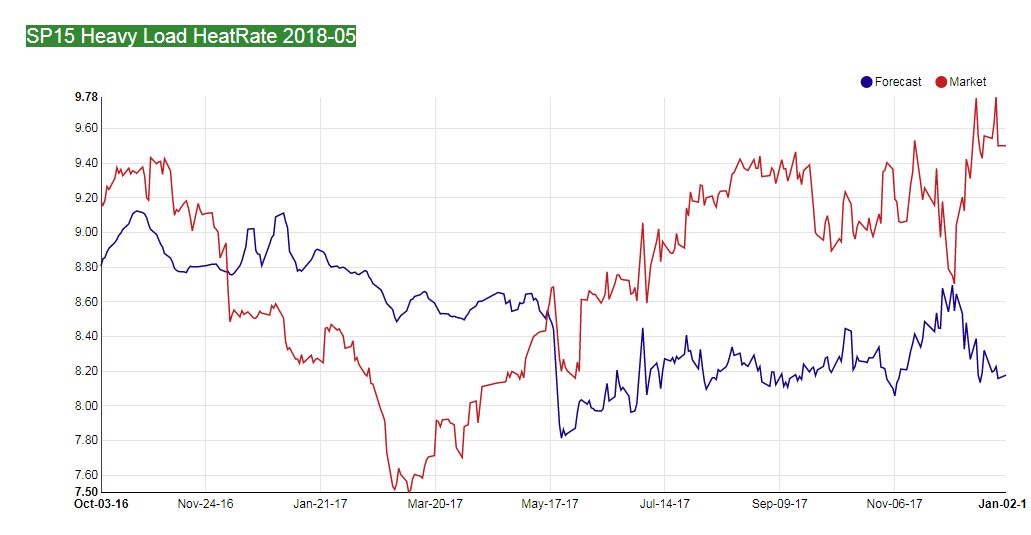 May SP15 HL hit a double top and has come off a bit yet remains near its contract high. It’s a dry water year in CA, so that supports high prices, yet the state will receive above average precip this coming week, is a new trend afoot? Plus, the WY17 hangover is still hanging around. A cool and wet spring will dampen our enthusiasm for all things  SP, perhaps a few strategic shorts in that resilient hub are now warranted?

Another high that couldn’t hold, the PV LL for April. This never made sense, now that it has come off it might be a safe short, except our fundamental outlook for next week is more bullish than today. If anything, we’d be biasing our book for length. 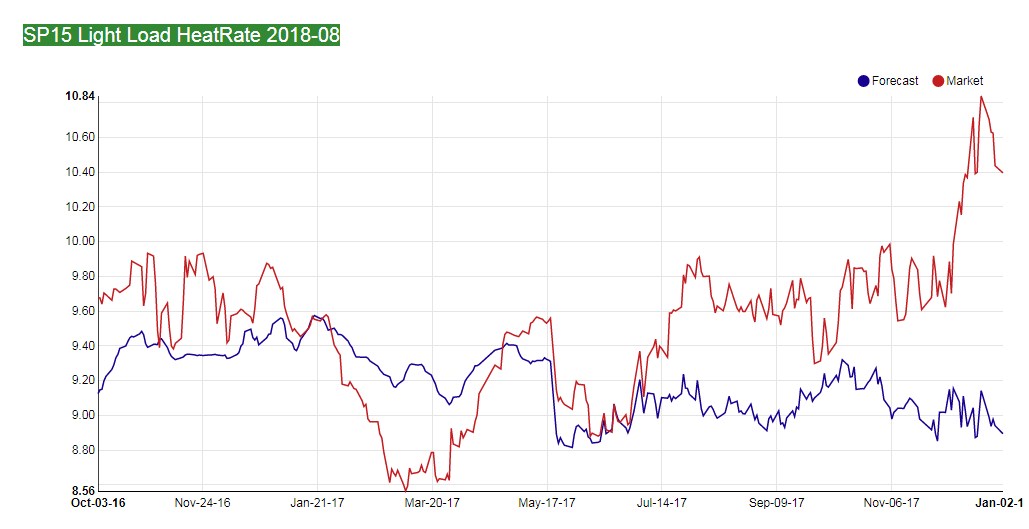 Another falling star, the SP Aug LL has come off sharply from its contract high realized last week. A caution for SP heat rates – now that Needles is back the SP gas prices are tumbling which will drive the heat rates up. Still, this was stupid high for a product so far into the curve. We know little about next summer.

We do know last summer was hot in June and May was less so and had massive hydro energy. Do we think the same will take place in 2018? Apparently, the market does, we don’t and would fade this roll. 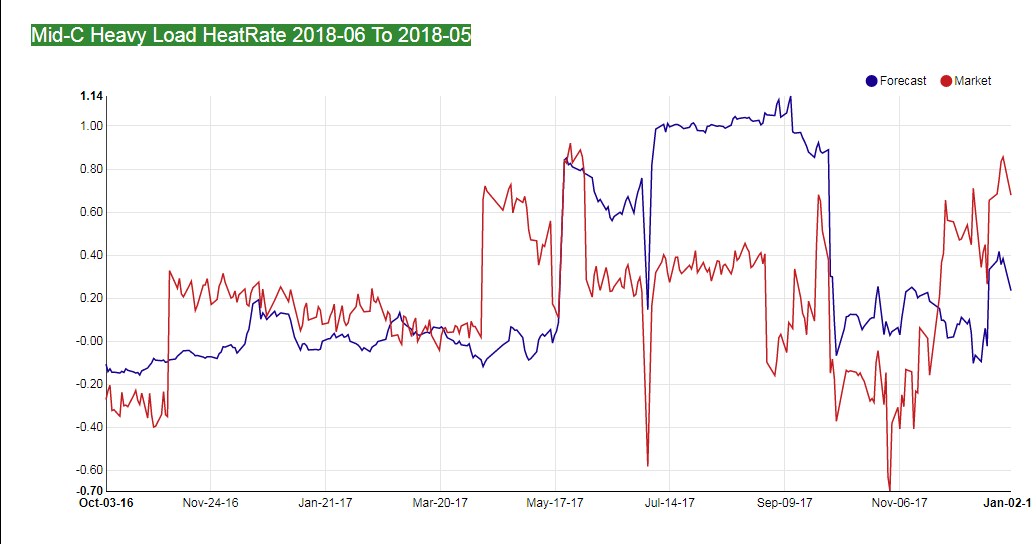 The same roll, except at Mid-C; after posting a too cheap to believe price in November it has steadily climbed, now the June premium is costly, in our opinion. Let’s just call this a normal year; then prices should be normal, now the June is richly premium. Watch it; it is close to a sell. 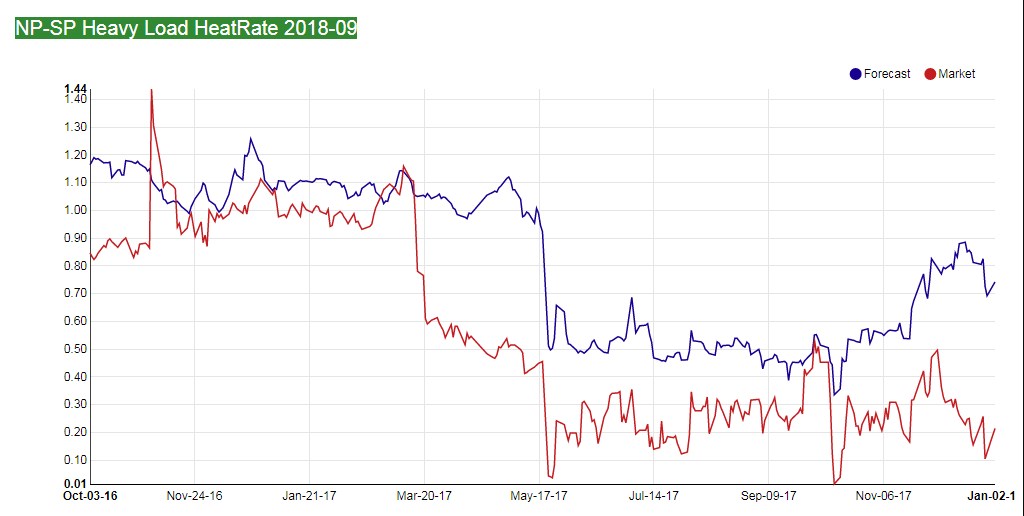 The spread between NP and SP in September is cheap, maybe too much. Last year there was massive NP hydro energy; zero chance of that this year. All of the WY17 will be worked out well before this goes to delivery. 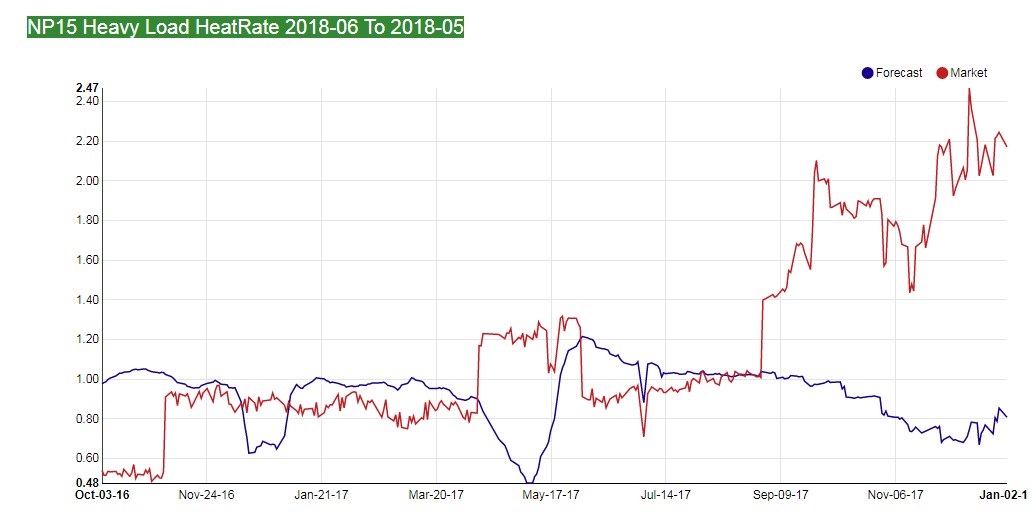 There is that May to June roll, again, this one at NP15 and equally precious. Probably only need to execute one, but the roll appears unreasonably rich everywhere. 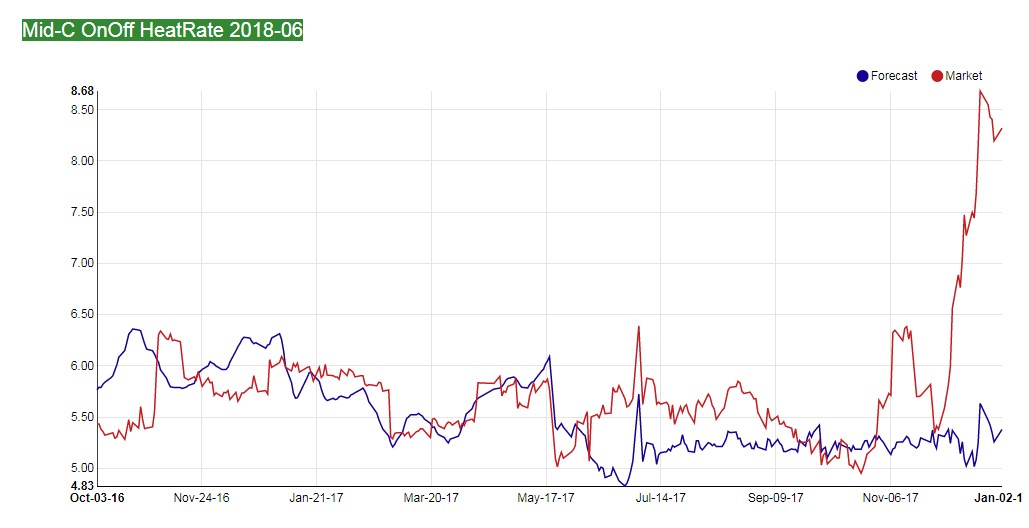 Whoa! The market loves the June on peak or hates the June off-peak (at Mid-C); one or the other is overdone. If you buy average water, perhaps the onpeak deserves a premium, but if there is any chance of below normal, and we think there is, this on|off is way too rich. In a below-normal water year, the runoff typically crests around the 3rd week of June, sometimes well before then. I’d fade this today. 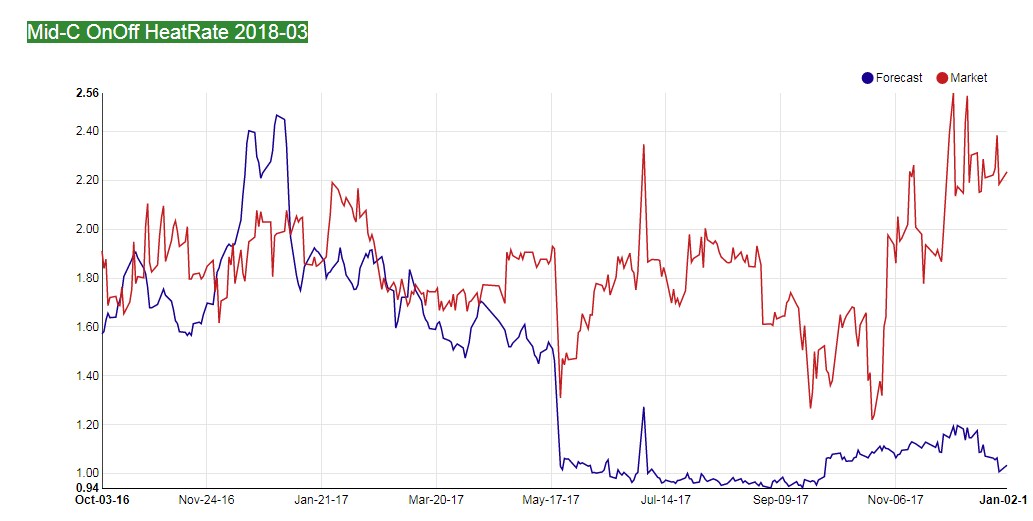 Another rich on|off at Mid-C, this one in March. Recall last year, those epic low-level snow melts and BPA’s ridiculous on peak spilling to force gas on the margin. The sacrificial lamb during that event was the off-peak; they let it crumble to zero. Don’t even think that will take place this year; there is no low-level snow anywhere south of Siberia. A more likely scenario is a 1250ish GCL draft that will all take place in April; maybe we’ll get lingering cold in the first few weeks of March. 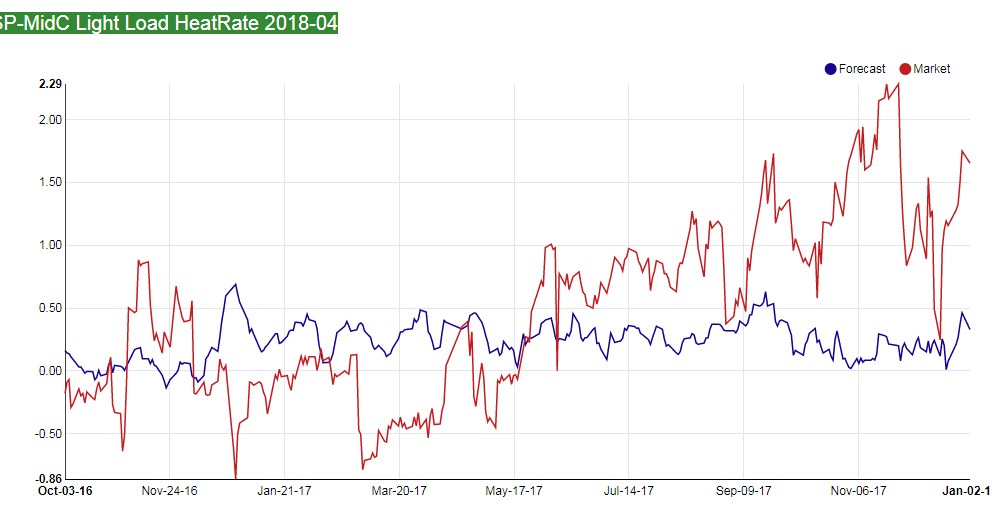 We’d not execute this spread; it’s posted just to emphasize the volatility. At a point, you could have owned the spread for free, it “settled” near zero. Sharp rally and it’s maybe reasonably priced, though probably back to being a bit rich. 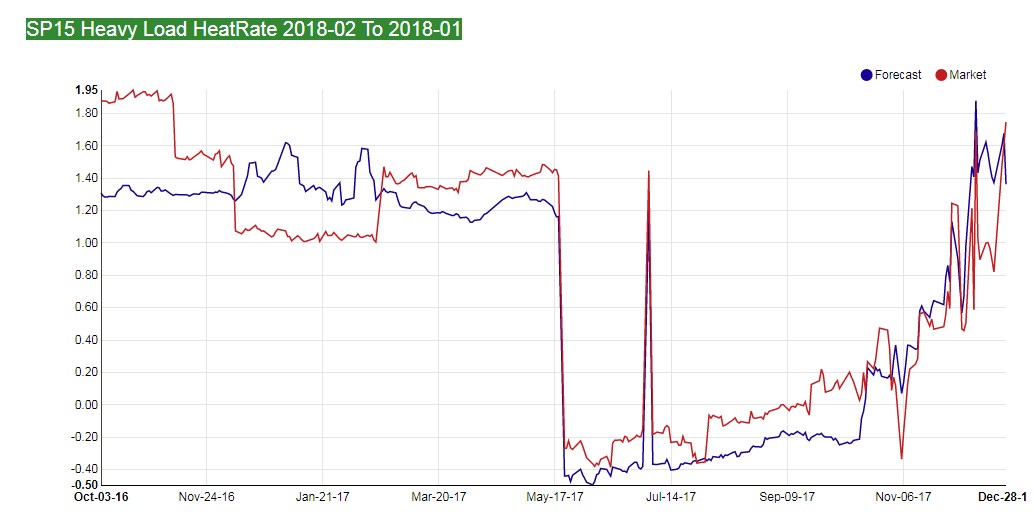 This is interesting, the BOM|Prompt roll at SP; impressive because it has been on a “roll” of late and now is pricey (to the Feb side). Why? Jan will have higher average demand than Feb in SP and across the WECC; we see significant cooling next week, and this is rich. 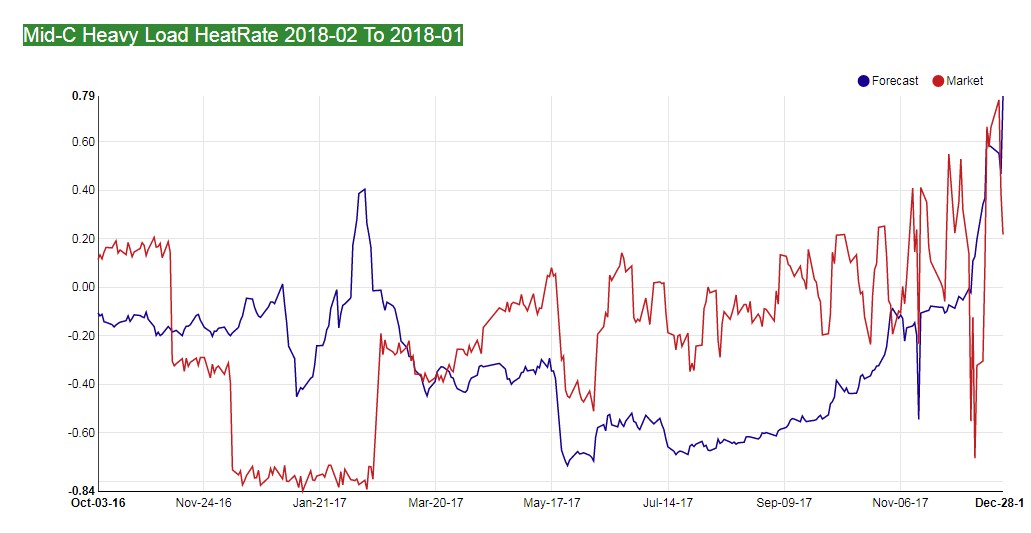 The same roll, this one is at Mid-C, and it too is volatile and was a contract high last week. If this cold holds (for next week), we should see a cash rally and Feb heat rates won’t clear near Jan. 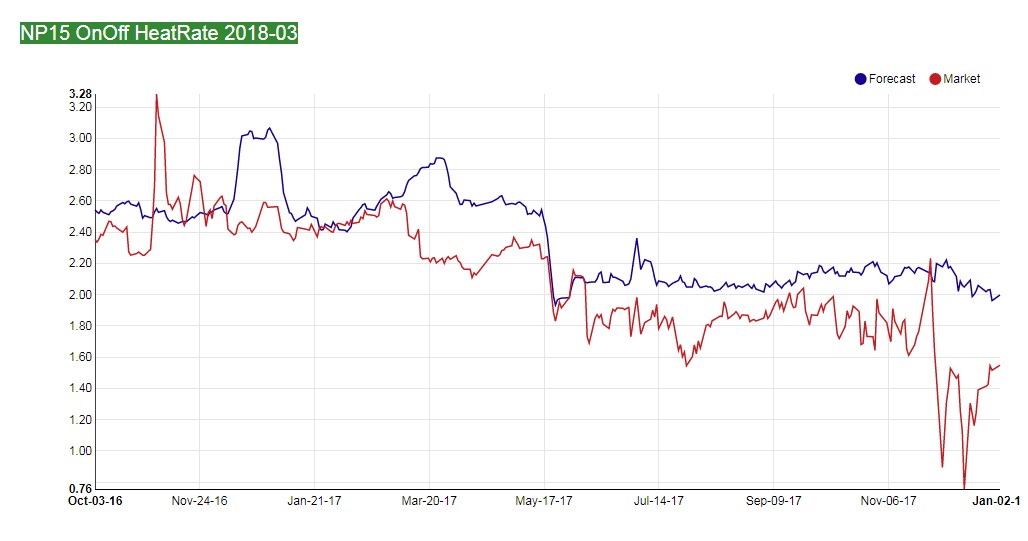 This on|off was found by sorting WOW ascending; the product was too cheap to meter a few weeks back, now it is approaching reasonableness, just wanted to point out what you should have bought. 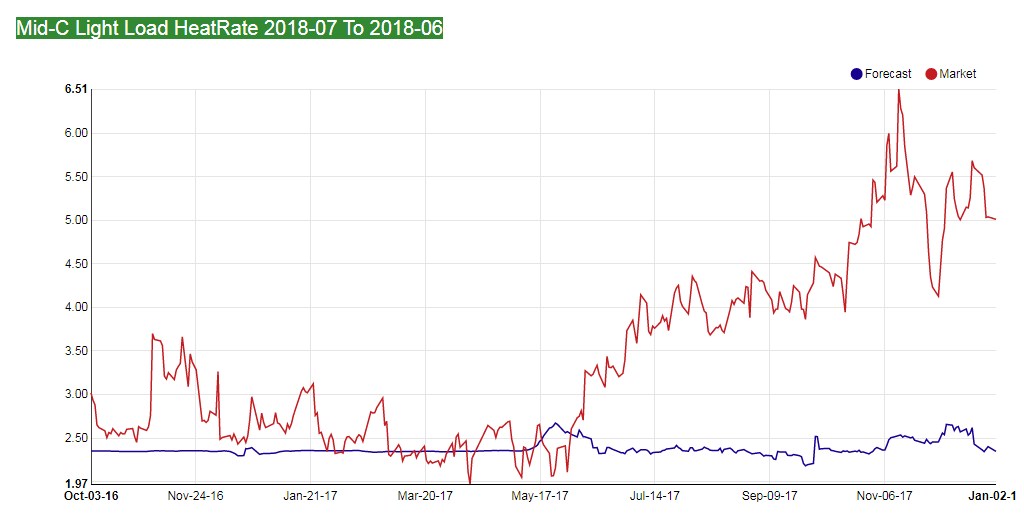 Though the July|June MidC LL roll has come off from its contract highs, it is still pricey in a dry year; in a wet year, it is cheap. Which is it? Wet or Dry? We don’t know, nor do you, so fade extremes; now it just sits on our “watch” list. 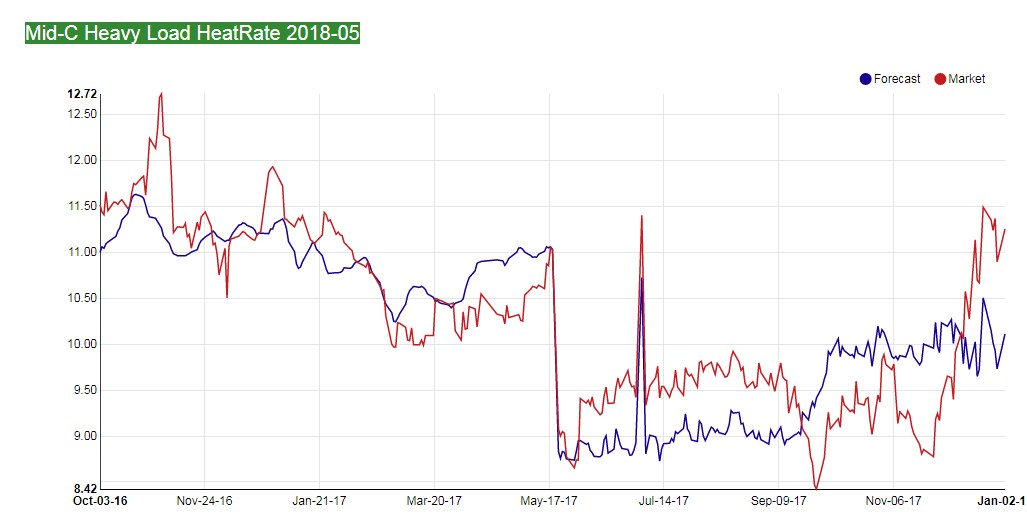 Another “watch “trade, the May MidC HL.  This is pricey, even in a dry year, but the govt says it is a 98-100% water year, that isn’t dry. Once we get to May, this may look like a screaming buy, or it “may” not. We’d fade extremes, this is a near extreme, but the dryness of the current forecast suggests MidC length, not shorts.