The news de jour is the Northwest cold; this is the real deal and arrives later this week. Some of the cold slips into California and will become Socal Gas’s first significant test. The entire WECC, on or around the 23rd of this month, will set its aggregate winter temperature lows, perhaps for the winter. Load-wise, the coldest day falls on a Saturday amidst a three-day holiday. Will the cold expand and extend? Will it get colder and last longer? Those are the questions seeking answers which only time shall reveal; we’ll be watching.

SP15 continues to set price inside the ISO (and outside), but that is a pure gas play; until the TWP outage is remedied, the hub will have the highest spot gas prices in the nation. The LDC (SCG) has not updated its outage schedule since Dec 8; it still shows 800 MMCF returning on the 25th, a Christmas present extraordinaire for the Socal Gas ratepayers, not that any of them will receive a penny in rate abatements; not after SCG has been injecting $6.00 gas. 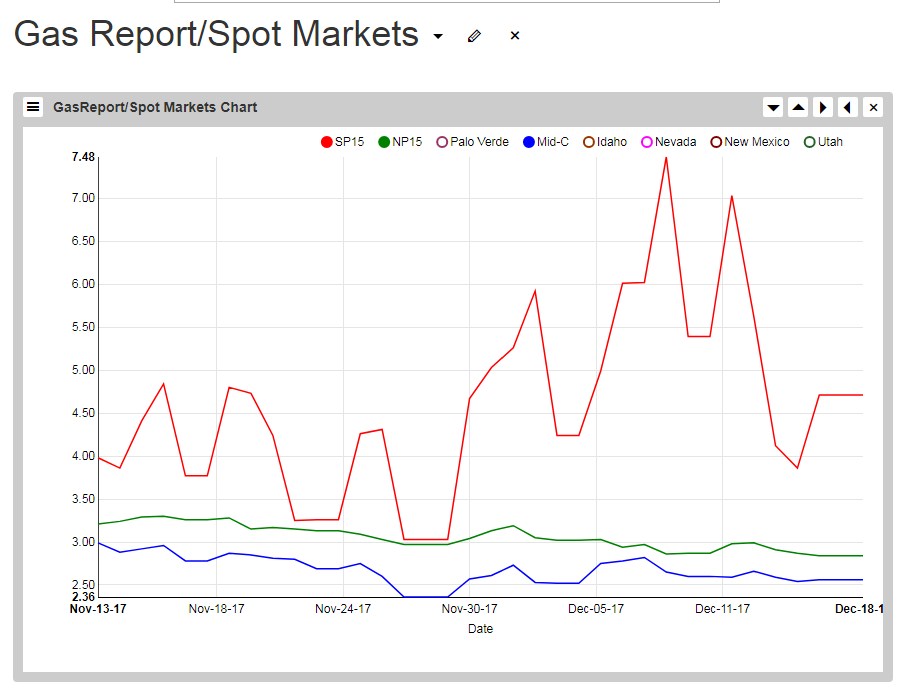 Perhaps the market believes TWP returns to service on the 25th; the spot price has cratered yet remains nearly $2.00 higher than PG&E Citygate. Let’s look to the forwards for more insight: 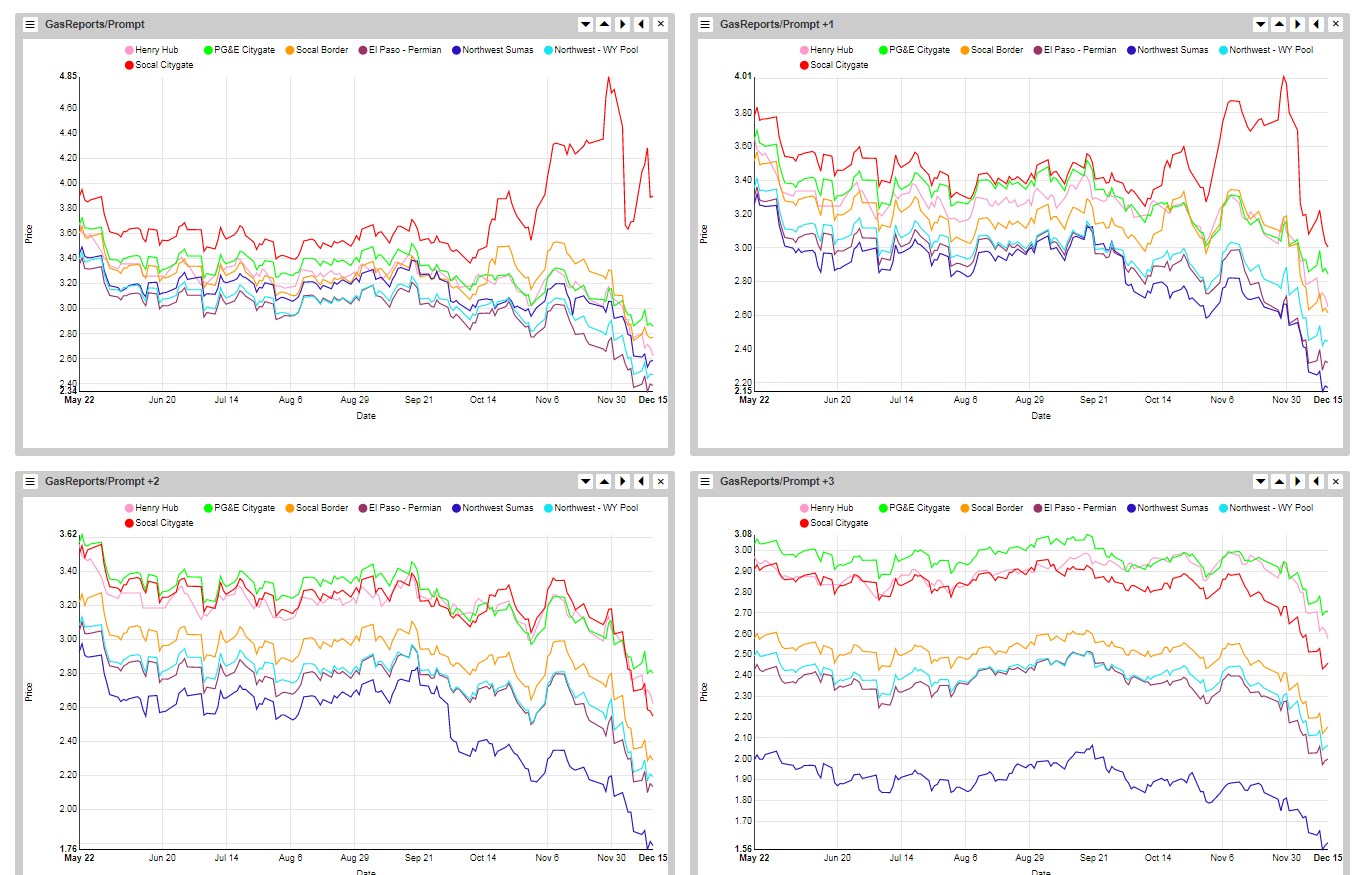 These are the four gas prompt months (Jan-April); note how the Socal Citygate premiums erode to no premium by April, even March is now trading under PG&E Citygate. Also note the plummeting prices everywhere, let by Henry Hub. This slate of cold days may arrest those declines, at least the basis to Henry should tighten. On top of cold, it is also dry in the WECC, which may become the most important fundamental of all — more on that in the hydro group. 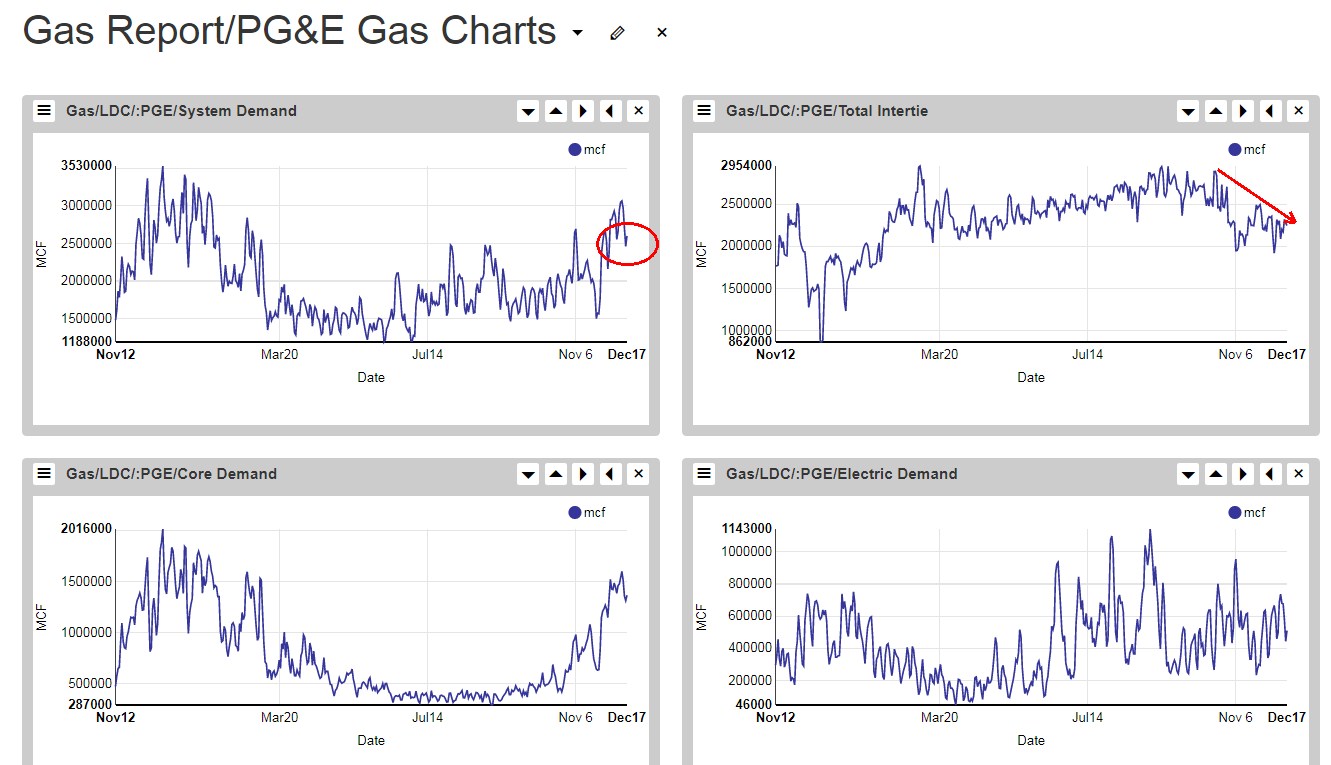 PG&E’s system demand has fallen off of unusually mild temperatures, that shall change sharply by the end of the week. We also take note of the sharp decline in the LDC’s total intertie deliveries, those are off about 600 MMCF since early October. This change speaks to the modest flexibility of the state’s pipelines; gas typically destined to PG&E’s underground storage has been diverted to Socal thereby somewhat offsetting the TWP outage. 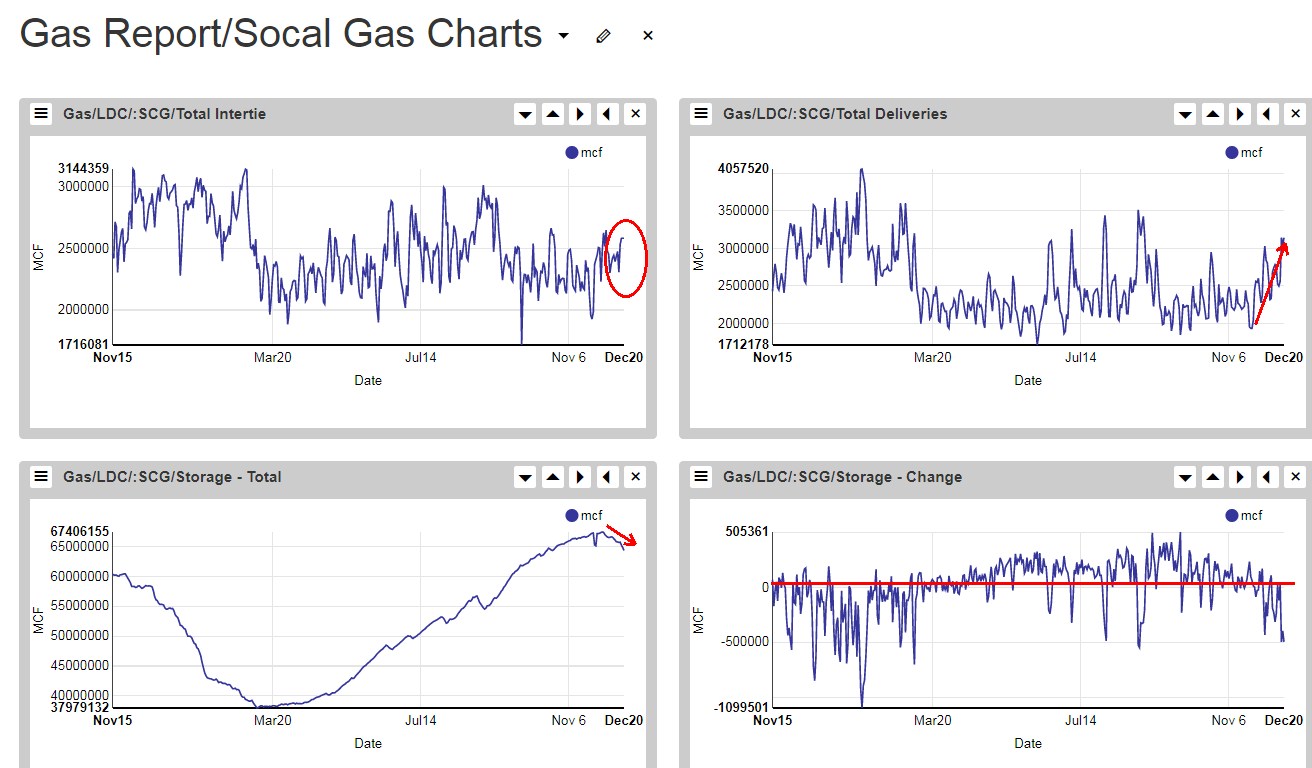 Socal has been hitting its storage relatively hard of late, just wait until this weekend, we should see calendar year high pulls. Also, take note of the increase in deliveries over the last month; the system is being squeezed for every last molecule. Longer term, we think, the state is going to look towards more intrastate pipeline capacity to both mitigate the impact of future outages and to offset the expected reduction in storage flexibility. Bottom line, gas will remain a dear commodity inside the state, as will water, power, gasoline, rationality, and sanity.

We led with cold, here it is … 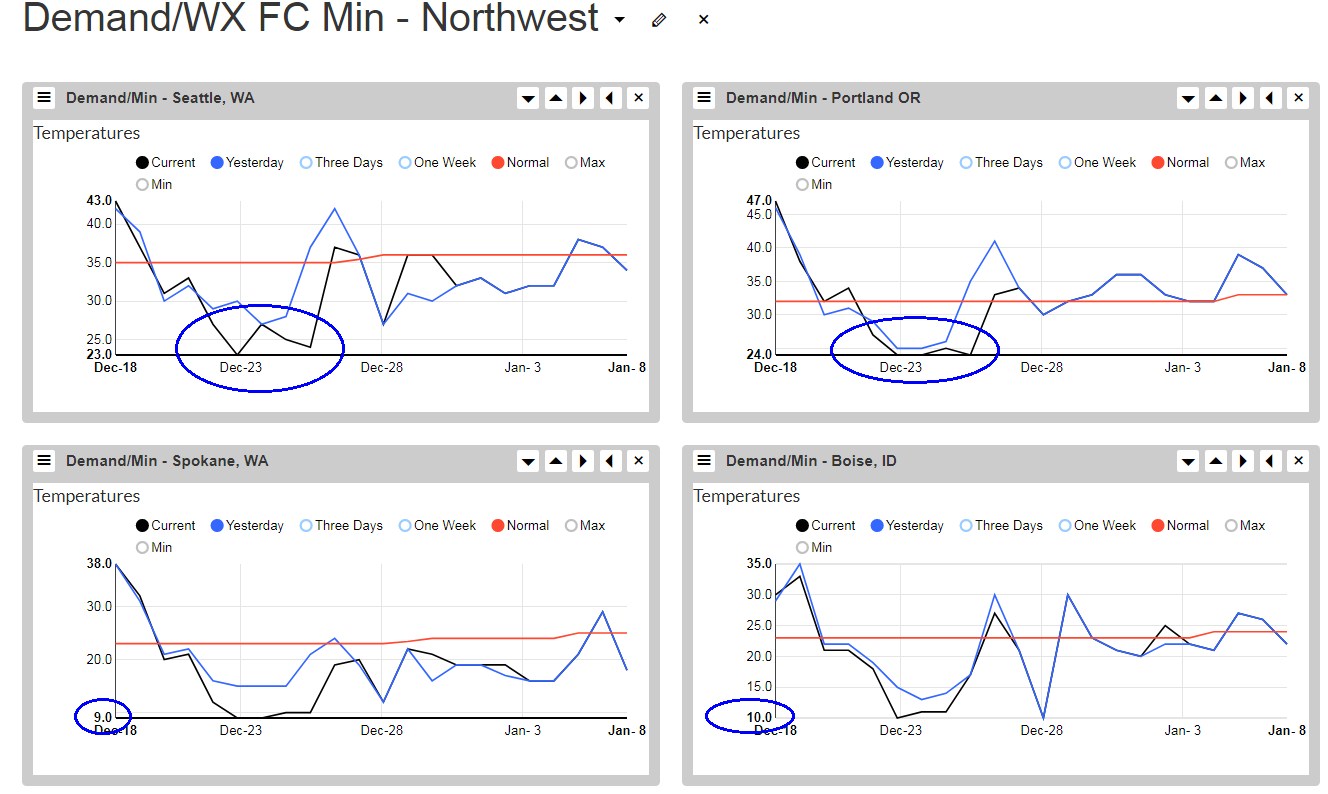 Global what? Low 20s in Seattle and Portland  is cold and nearly a design day, but alas it falls over the weekend in front of the holiday. But will it only be 3-4 days, or will we see a repeat of last year where the cold began as short-lived and stretched out for weeks? None of these forecasts will break the bank, but enough consecutive cold days might. For now, the outlook is bullish on BOM and will have a marginal fundamental impact on Prompt, however, the market sages most likely will bid up the entire Mid-C curve. More on that in a subsequent post. 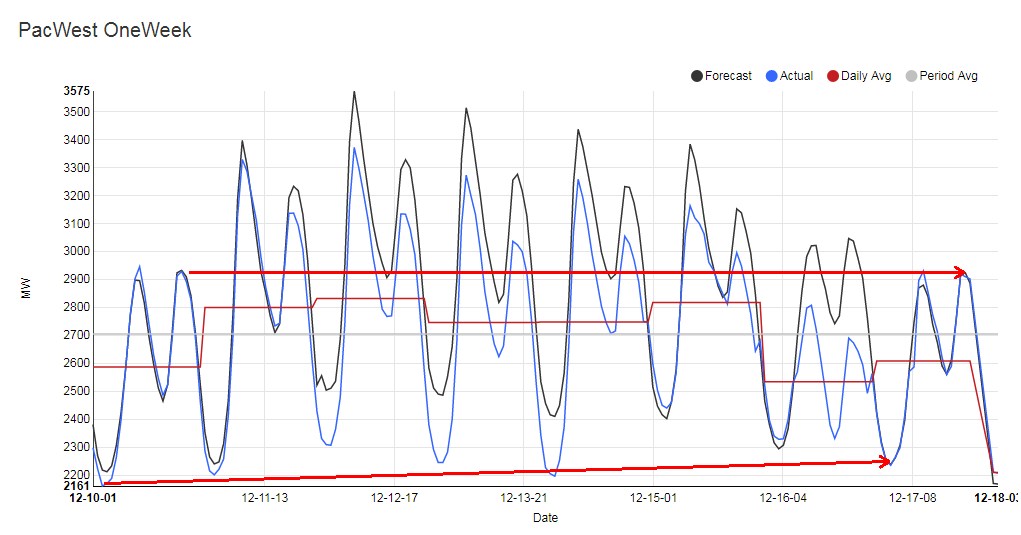 For now, loads in the Northwest were sideways, though we see a slight rally in Pac West’s nighttime troughs.

LA is cooling down, remember last week when Burbank was in the mid-80s? Even the lows are now back to normal or below, yet this cold event is mostly limited to the Northern half of the state. Sacramento will have a string of days approaching freezing; even San Jose is cold. Core gas demand, and power, will soar off of the frigid weather. 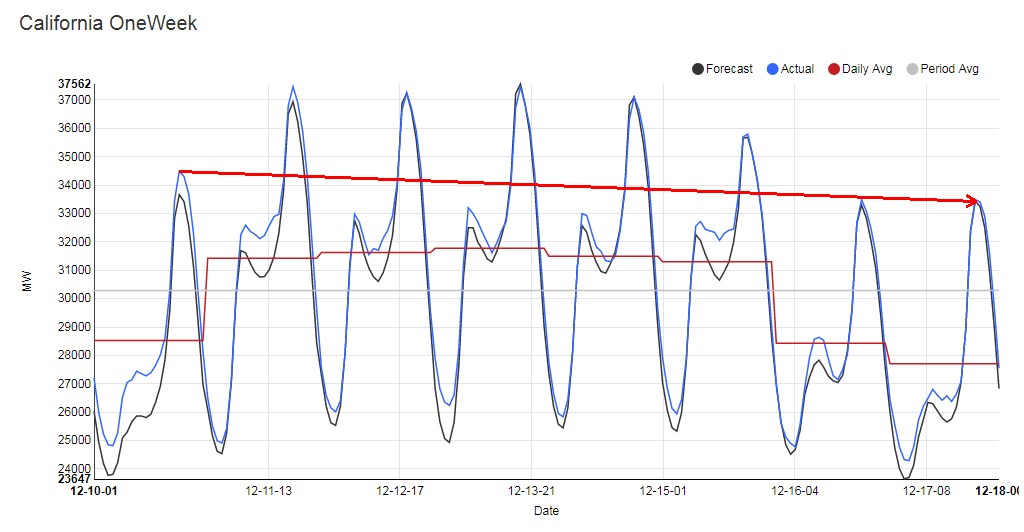 For now, though, loads in the Golden State are in free fall, falling away from this LA mid-80s.

All of the WECC is cold, and Denver leads the herd with lows approaching zero (F, not C). 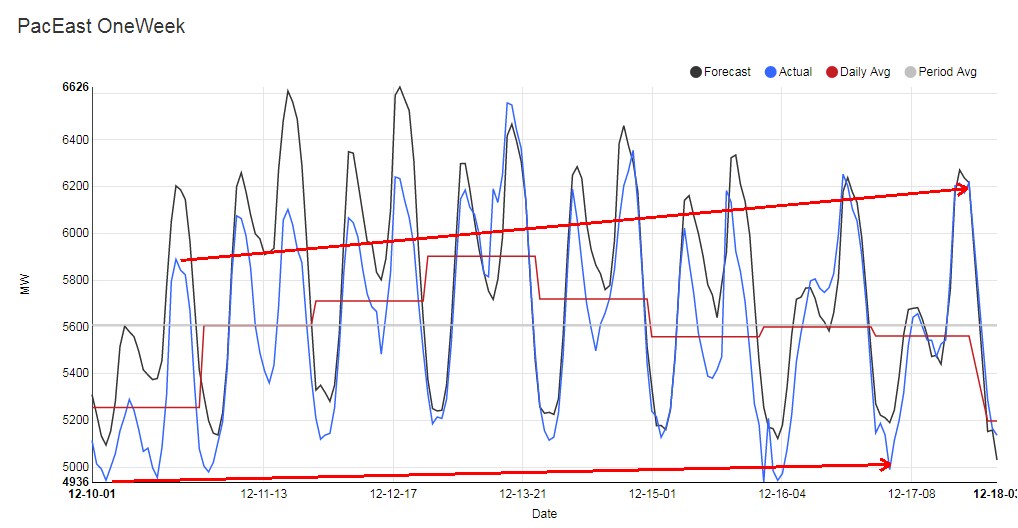 It has already gotten cold as evidenced by Pac East’s surging loads.

Mostly mild temperatures (Realized) of late; the Northwest has grown warmer over the last couple of days. Note the moderate temperatures in LA, hence the load decay. 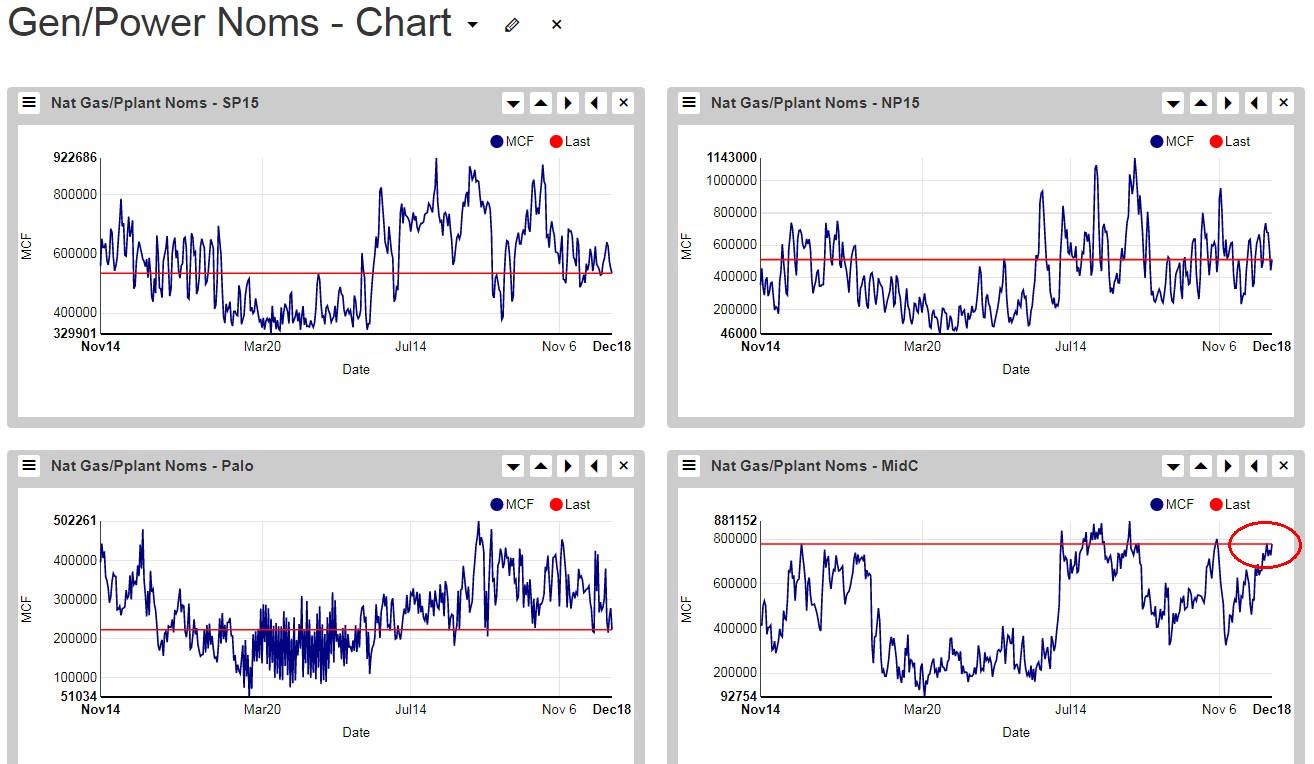 Only but one hub, the Mid-C, has seen power gas nominations rally while all the others just decay away. We know why Socal’s noms are so low  — the gas is too expensive to burn. 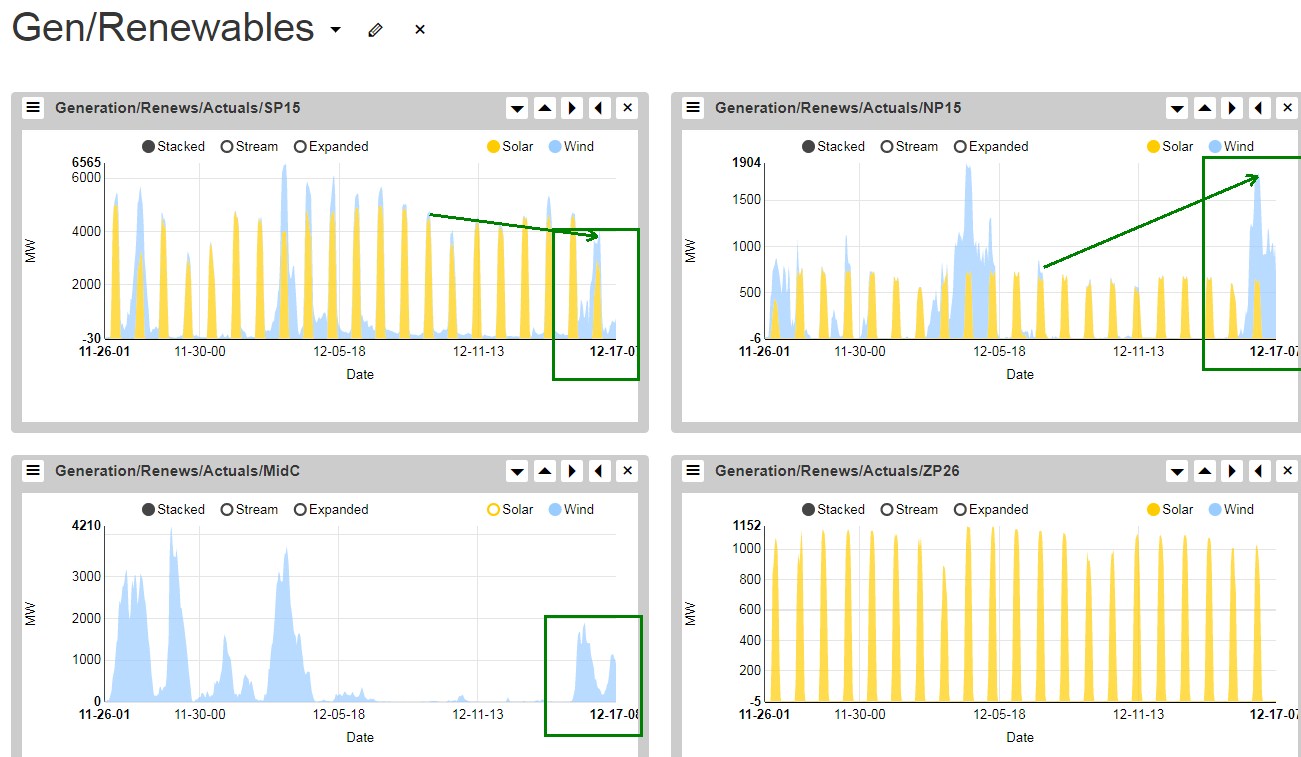 NP had some significant wind production over the weekend; SP just had “some” but even with a bump in wind, that latter hub saw a net decline in renewables. The MidC had a slight bump (from zero).

Aside from this info, not a lot more to report on the gen front: the nukes are running, and the ISO outages are sideways.

Let’s cut to the chase, the precip forecast has not improved much:

The interior stations are all well below average; Boise is about 20% of average over the next ten days. Spokane is well below 50% of normal. Kalispell is poised to get nearly an inch over the next two days, then next to nothing. Big Mountain should have some phenomenal skiing during the early part of the week. After that storm, there isn’t much precip heading to the Northwest all of which is teeing up a dry Flood Control outlook for the first Corps release around Jan 10.

We already see some very low SWE anomalies in both California and the Northwest; these will only get lower over the next few weeks; so will our Water Supply outlooks:

Despite that inch of precip falling in the Upper Flathead/Kootenai, our internal water supply outlook at both TDA and GCL is now below 90%. We expect to see the mid-80s by early January which will drive the Corps to a 1260ish Coulee draft. That may suggest there will not be any floodgate work this year.

Water remains tight; Columbia River flows at the US-Canadian border are at a five-year low, and there is no respite from natural river flows, only from deeper drafts:

And both the Canadian and US storage is below average; even California has dipped below its five-year highs.

So tight water heading into the coldest days of the year? Maybe not, check out the NWRFC’s 10 Day:

In this plot, we compare the STP (last week’s) versus the most recent RFC 10 Day (last Friday) and note a 2800 aMW bump for the day after Christmas. This isn’t a natural river flow rally, this is a regulated drafting of the reservoirs to serve load, all of which will drive a deeper hole in those reservoirs. A few cold days isn’t a big deal, a month of cold is. We’ve been on the Mid-C bid over the last month, we are still on that bid, even more so now that we have confirmed cold.

BC is selling less, but remains a net seller. Both the AC and DC are hitting TTC in many hours, and the Path 26 flows surged over the weekend, as they should have been doing all along. We found it interesting that Palo exports to SP tanked and saw no hints of any line maintenance. Why wouldn’t that line be full; why wouldn’t the market arbitrage the $2.00/mmbtu gas spread?

All WECC has grown more bullish off of chilly weather over the weekend. Cold and dry, a long’s warm and wet dream. More on that in a post to follow.