Our takeaway, from looking at today’s fundamentals, was of a bullish bent. Of course, looking at just fundamentals is just half the story; it would be like attempting to make a baby with just a Playboy magazine. You might feel good for a bit, but eventually, you’d realize you’re missing a key ingredient. For trading, that absent component is the market prices since everything is a buy, and everything is a sell, if prices are cheap or rich enough, regardless of what the fundies suggest.

A few trades caught our eye this morning from our “APT – Best” view:

The view is generated by sorting upon the APT table in rank ascending, then filtering on AGG=”M.” in other words; the top-ranked monthlies are on top. We culled a few for discussion. 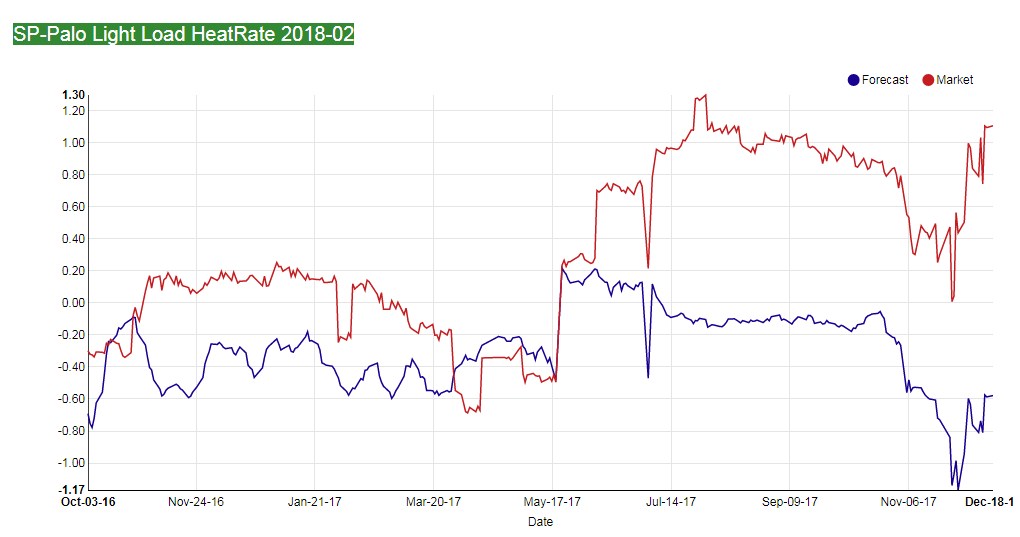 SP’s premium to Palo has soared over the last couple of weeks. We can get the HL spread; lines fill up and forward Socal Citygate is trading $2.00 over Border, but the off-peak has us scratching body parts. Most likely the rally is cash-driven, but now that the WECC interior will “enjoy” some sharply cold days where the lows are realized in the off-peak. It seems this is either “overdone” or “done incorrectly”. 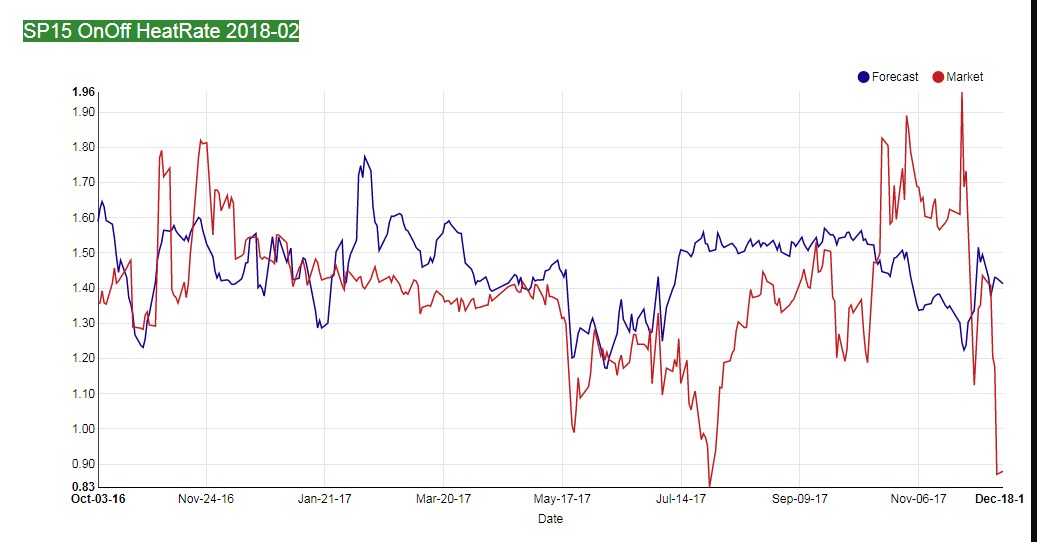 WOW, this chart is nuts and most likely driven by a forward gas price that is all over the map. That said, if you can leg into the Feb On|Off heat rate it may be a great time to buy, and then it may not be. The contrarian would fear the outside hubs grow ever more bullish and offer ever less energy to SP. Meanwhile, SP doesn’t fix Needles, and cold weather forces deep draws, and the LDC cuts the gas to selected LA residential neighborhoods. Riots ensue and, well you get the picture. 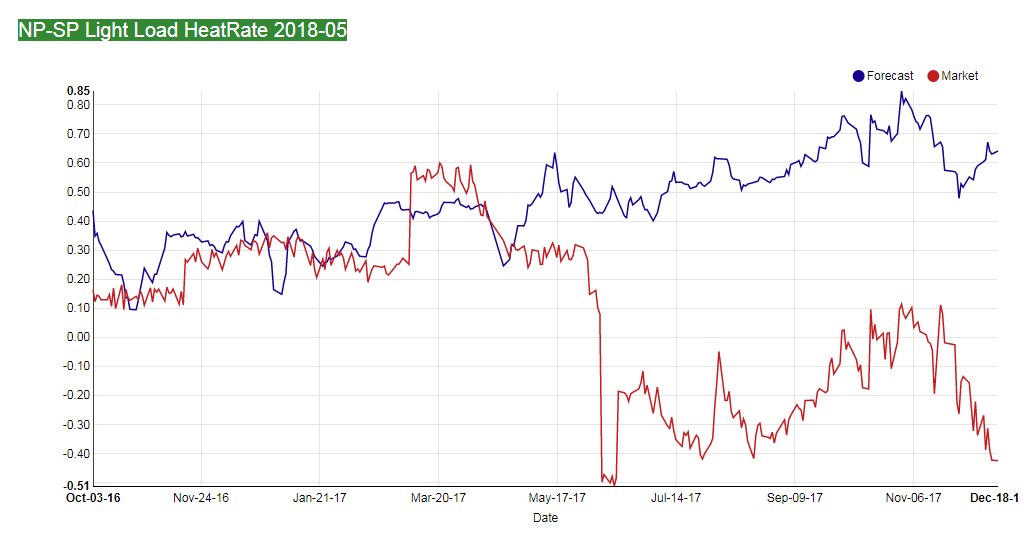 More cheapness, this is a spread between NP and SP in May. The market hates it because it loves SP, but we don’t get it. California is teed up for one of its “normal” years, meaning its snowpack will be about 50% of normal. With more hydro capacity at NP, wouldn’t that make it more bullish in a dry year than SP? 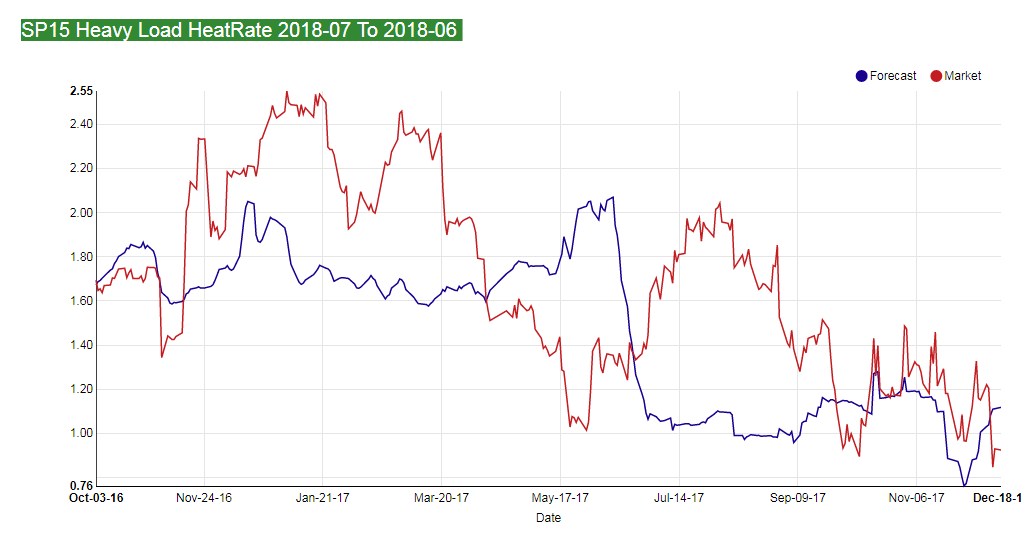 This heat rate spread (SP July to June) we know is crashing because of gas. That said, it is cheap and more driven off of very hot 2017 June weather than anything else. Fade it. 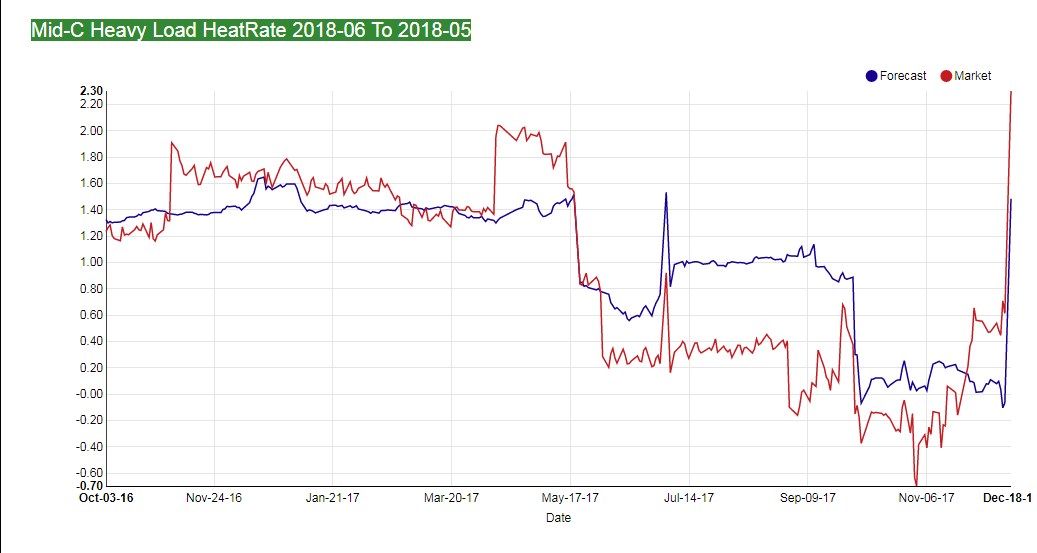 A spring roll at Mid-C with some other-worldly volatility.  Yeah, we get “the dry MidC is bullish” theory, we created the hype, but don’t get why June is so much a premium to May, all of a sudden. No one knows when the melt will take place, will it be April, May, or June – it won’t be July with the kind of water year currently building. Extreme moves in the runoff period should be faded in December; too early to make those calls. 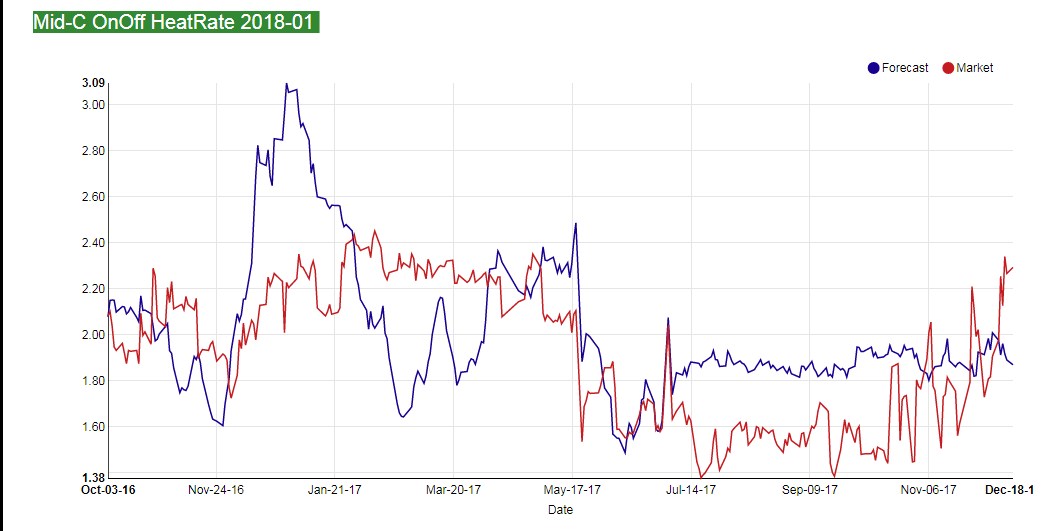 Closer in, like Prompt Month close, we see a sharp rally in the MidC On|Off. Frequently, we’d be fading such exuberance but not this time. If the cold builds, extends into January, all bets are off. Everyone knows the types of HL premiums realized on extreme Net Demand days. Not saying we’ll see those, but we’d be cautious against taking on any HL short-side exposure. If anything, we’d buy this. 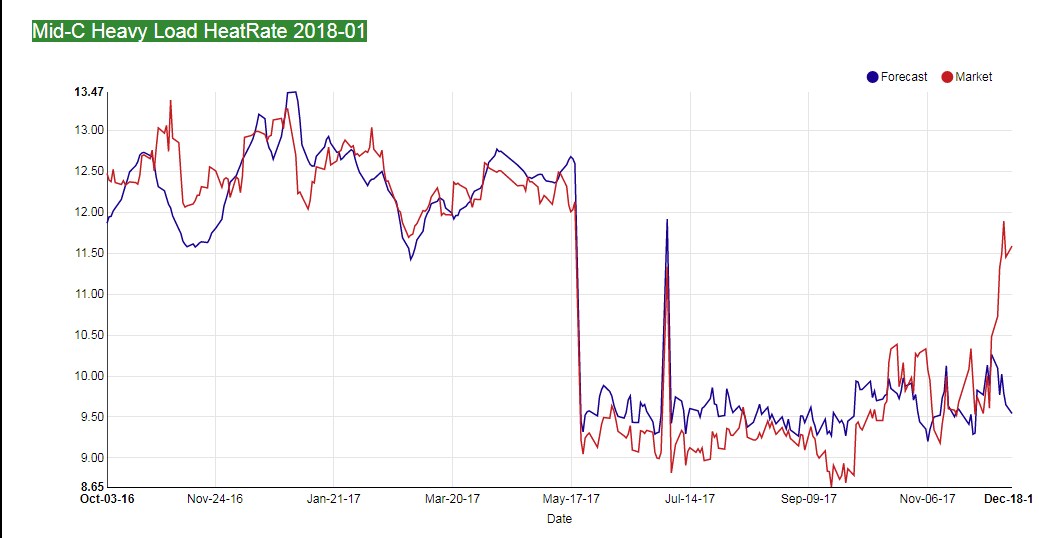 Same trade, just the HL leg. Big rally but reasonably priced given what we know today. If the cold fades into warm-wet, sell it; otherwise, we’d be more inclined to buy.

In this view, we sorted on WOW ascending (Week on Week change in Rank) to get the most significant moves away from rank on top. Occasionally we find opportunities in this view. Usually, we just discover “lost opportunities.” 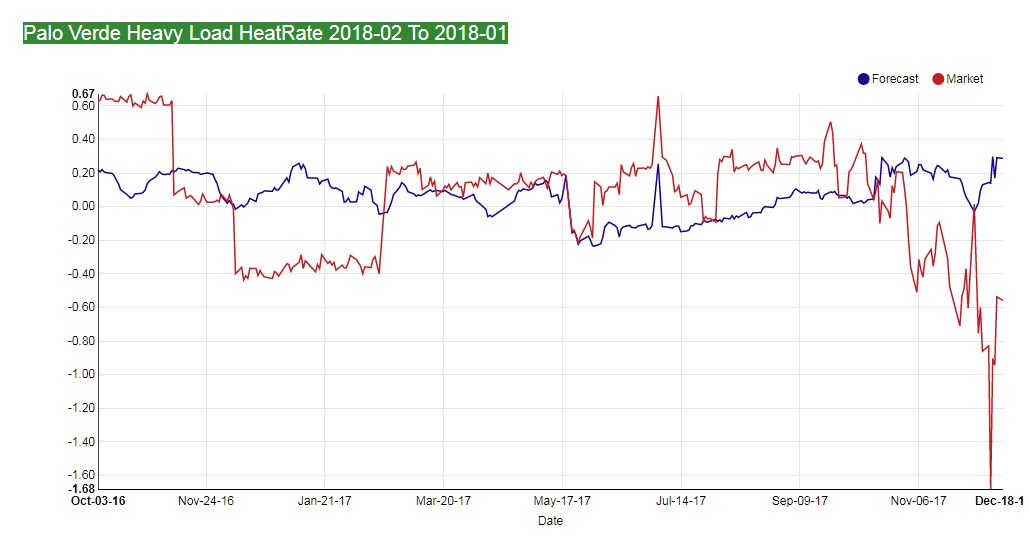 The above is an example of a lost opportunity; this roll was marked at a ridiculous level; probably because it was a bad mark. Since it lasted but a day, we’d not have a lot of confidence it could have been executed at that level. Still, it makes for an exciting plot. 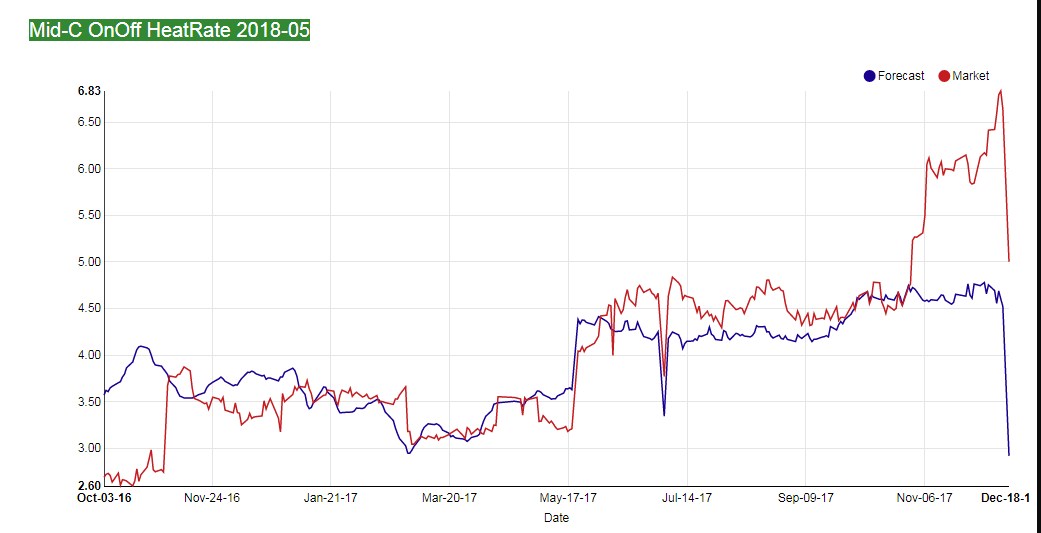 Leads us to think its a gas price move since both the forecast and market are dropping in parallel. We wrote about this (from the short-side) when it was at those lofty levels last week and said it was a short. On|Offs tighten in dry years, not blow out. 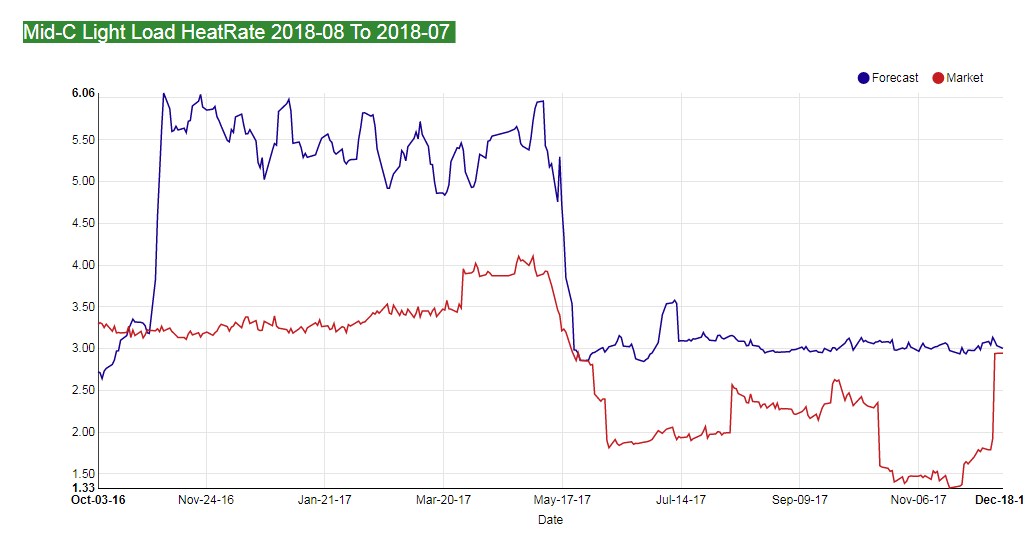 We like this chart; the market did what it should have done – tightened up the July. We would not expect much, if any, melt in July in a dry year, the month should trade like a thermal period, like an August; now it is. 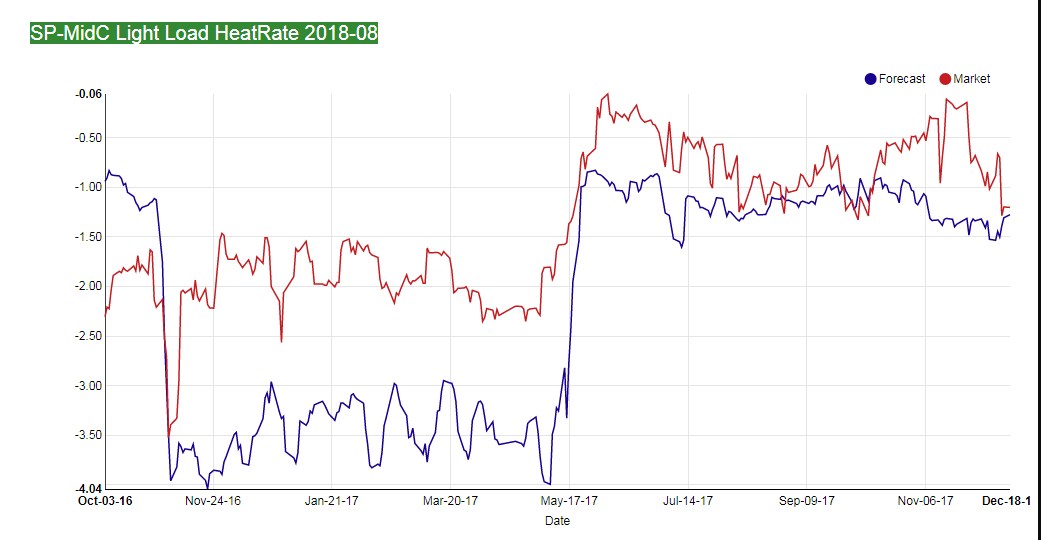 Same with the spreads, especially in August. There is no fundamental reason why August SP should command massive premiums to the Mid-C in a dry year; now those premiums are no longer there. 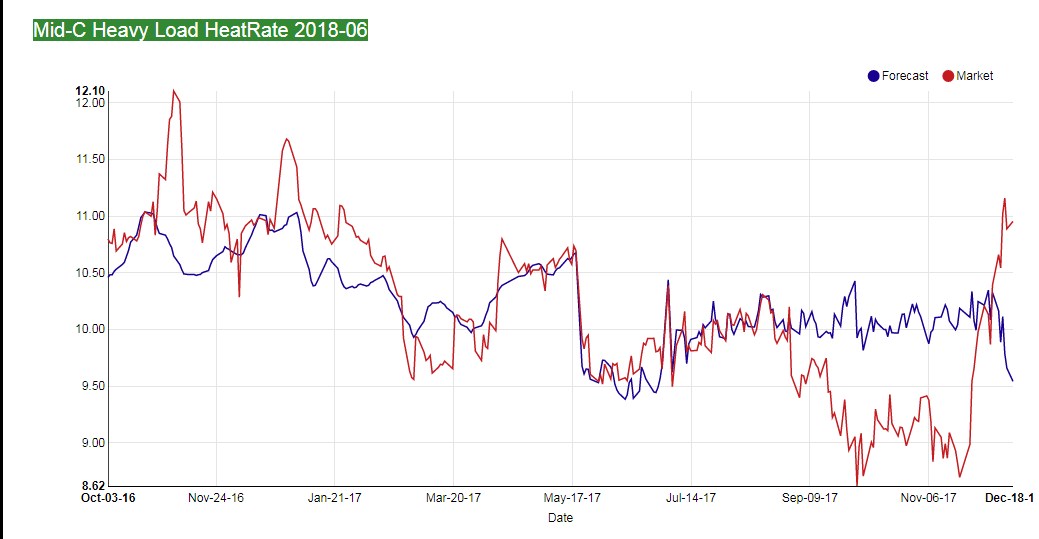 We wrote about this, too, a few weeks back. The June MidC was trading like a 110% water year, but then I guess the NWRFC had TDA north of 105% back in November. So the sheep followed the wolf to the butcher, and now some astute trader is eating lamb chops.