The Socal Gas drama continues to play out; spot gas shows a $6.00 handle:

Crazy. Contrast SCG with PG&E Citygate, clearing at a modest $2.97 which is just $0.18 over Stanfield. What is most interesting, more than the tight PCG-Stanfield spread, is the spread against Socal Border which cleared over PG&E. And we thought the issue was getting gas into LA. Something must be terribly wrong in Socal. Let’s look closer at those fundamentals: 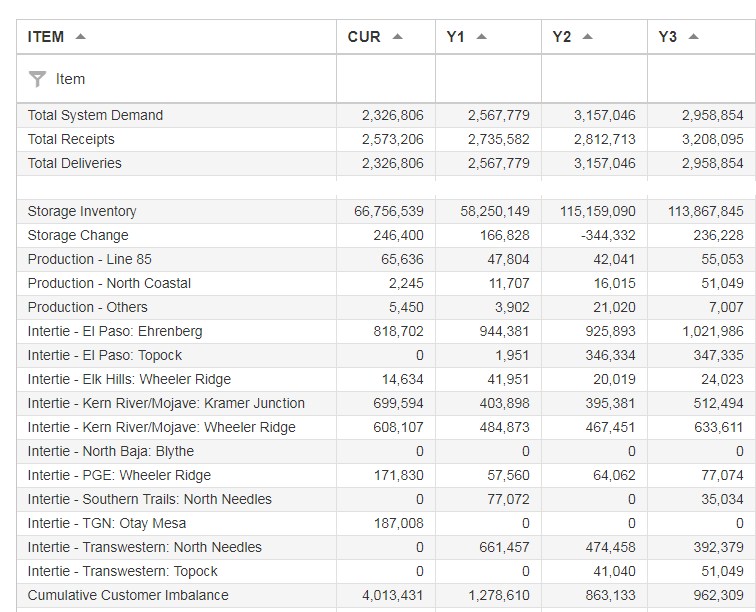 Call this the Socal Gas “L&R,” or for those that hate acronyms, Socal Gas’s Loads and Resources. In this view, we are comparing current values (today) vs. last year, two years ago, and three years ago. A couple of observations:

We’ll defer to the gas experts to draw the correct conclusions, though we find the data telling. 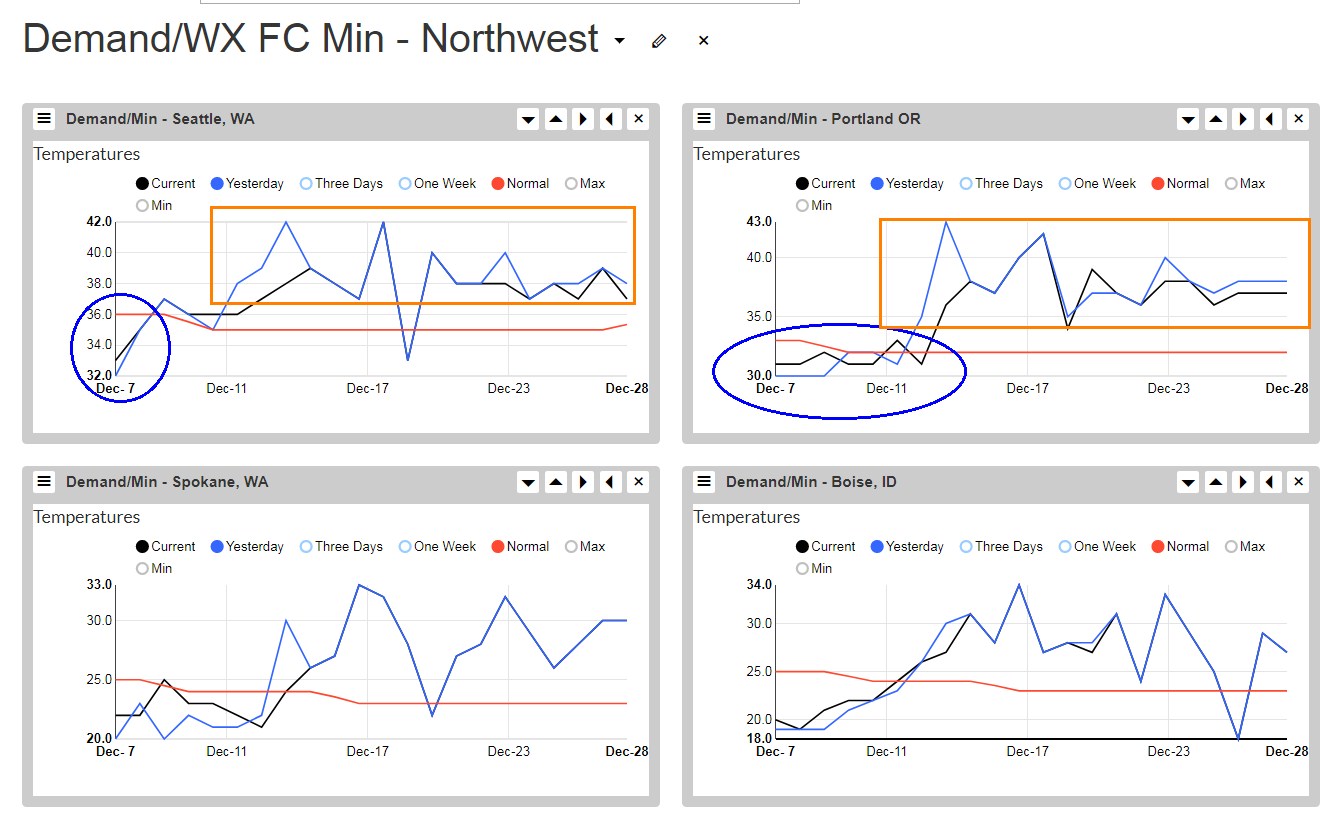 That cold weather arrived in the Northwest, but it is only cold in the morning; the truth of that statement is the round of golf I played in Seattle yesterday. Beyond this weekend, the weather turns much warmer; higher highs and higher lows, all of which means lower loads and perhaps lower prices. 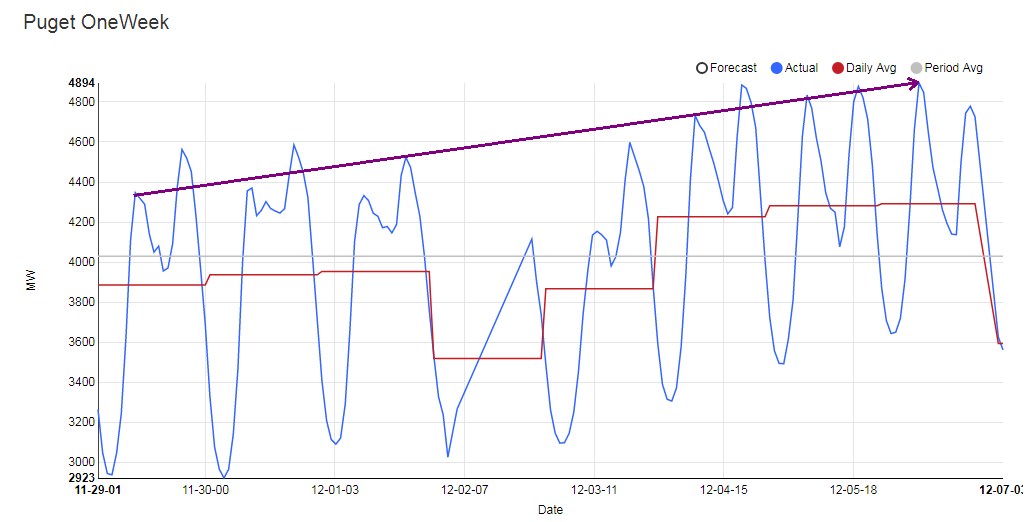 We gave up trying to pick either Min or Max for California; now we choose both. LA enjoys pleasant days in the mid-70s, despite half the city in flames. Look at the number of days San Jose sets a ten-year high in max, though min is just average. Back to Socal, there is nothing bullish, power or gas, in these forecasts. 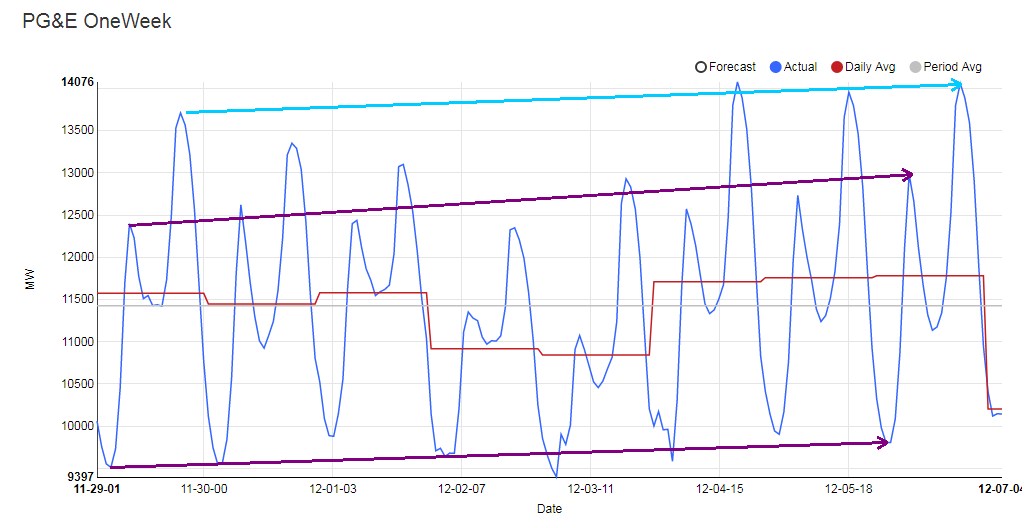 Like Puget, PG&E’s morning loads are soaring off of cold nighttime temperatures; the morning peak has rallied much more than the evening. The daily low has also surged over the last week. Not true in Socal: 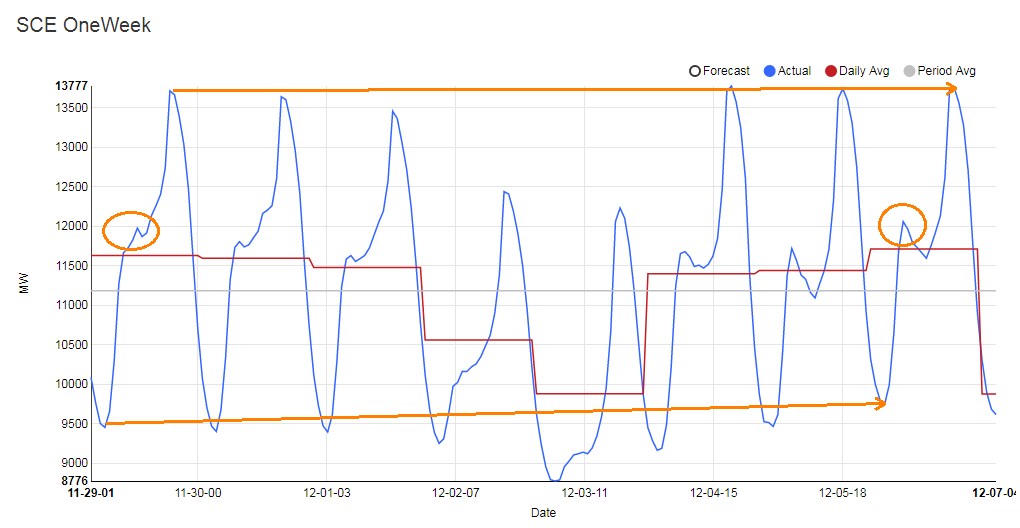 Edison’s loads are just sideways, though its lows are higher, and look at the budding morning “peak”; barely registered.

The interior realizes cold weather, so is Nocal lows, but the California highs are load-neutral. Phoenix is also loaded neutral, pretty much in both its highs and lows. Portland/Seattle realized modestly cool nighttime temperatures, but its day peaks are off ten degrees from two days ago. 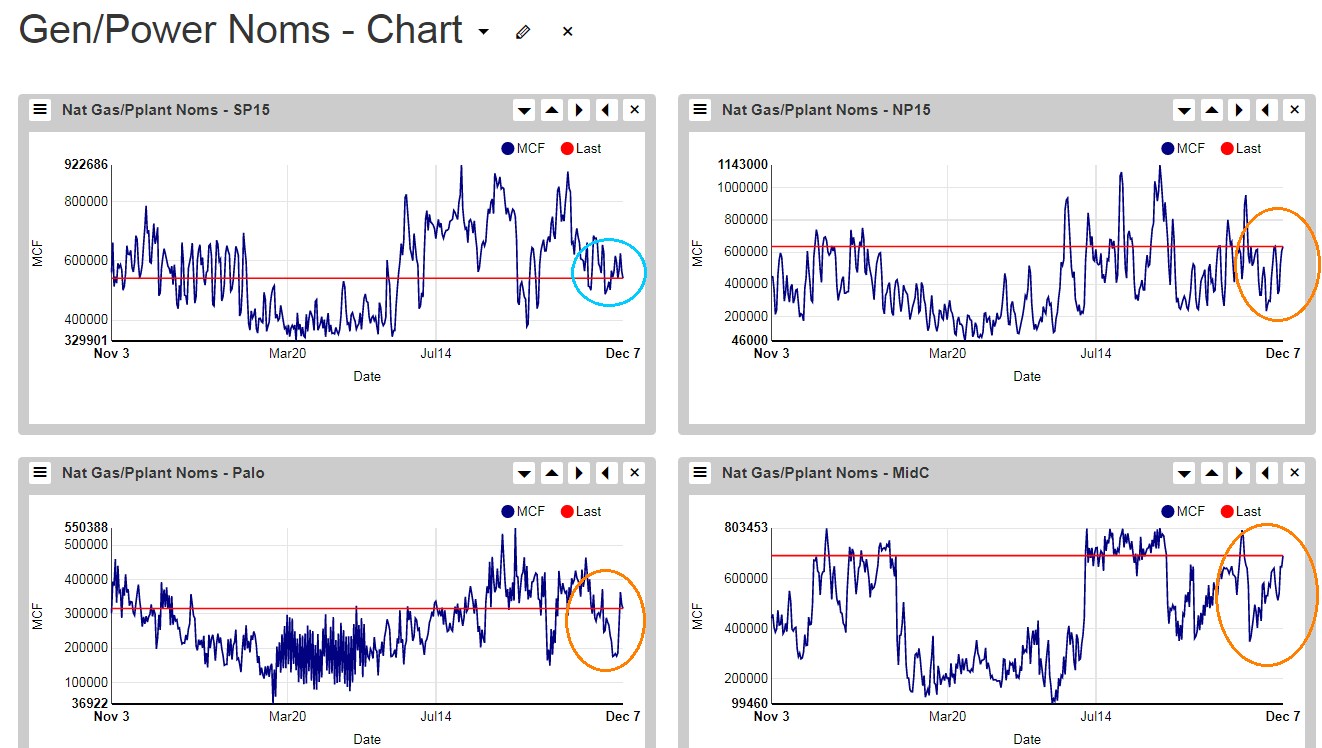 All hubs but SP have seen gas nominations rally. We suspect SP is rallying as well if you account for those “Customer Imbalances.” Instead of nominating, the Socal generators just pull gas and pay the fine. 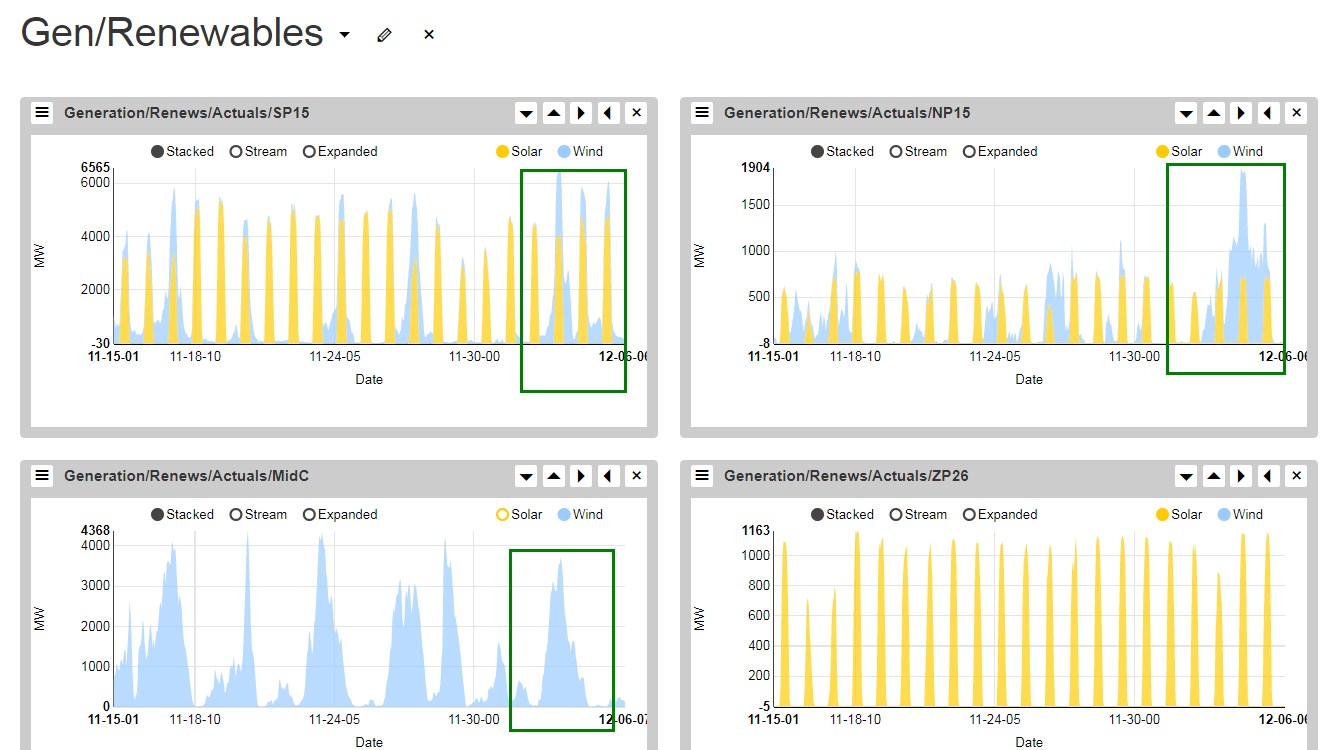 Lots of wind energy inside California; no doubt the LA renewable naysayers weren’t saying nay yesterday. All the nukes are running, and we’re seeing more ISO units returning to service: 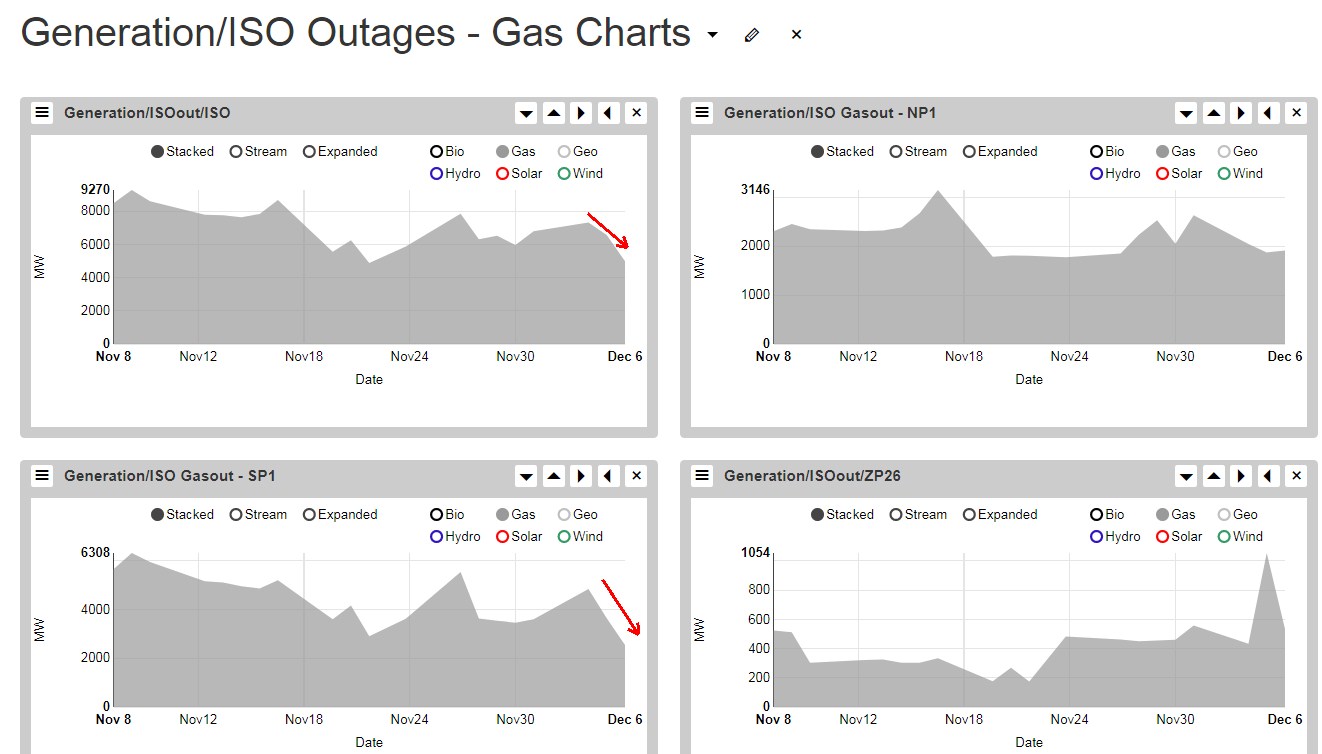 No surprise and no one should care much; those returning units are unlikely to be called upon during these bearish times. 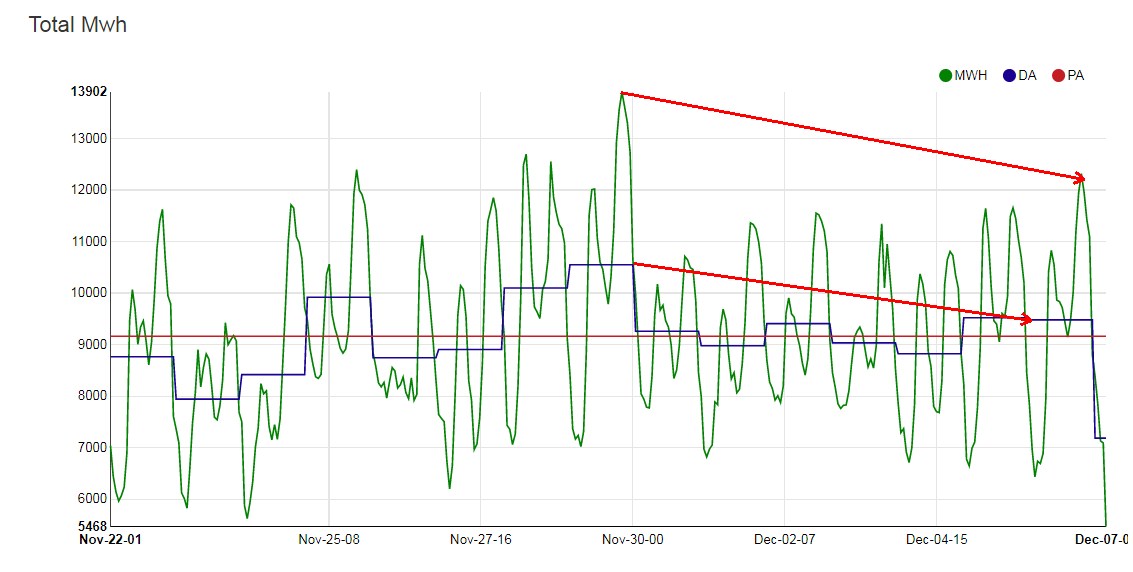 This is a plot of total reported Corps of Engineer Northwest hydro energy (MWH). Though the COE only reports on a week lag, Ansergy extrapolates through the current hour using actual H/K values. The chart looks bullish because of the cuts, but those are mainly driven by the big day on the 29th.

We’ve mentioned that the cuts in iISO hydro energy had reversed; in this view, we compare daily HL and LL across the last five years. Sometimes, it is nice to put data in a historical perspective.

All of that ISO hydro energy surge was explained by the recent rain storms; there are no more of those in the ten-day outlook, though the hints are becoming louder that another event lurks out there in days 11-20.

We think this Northwest dry spell is today’s  most relevant fundamental news.  Though there are, like California, hints of another system in days 11-20, a hole is being created with this dry weather. We already see it in cumulate snowpack anomalies:

Both California and the Northwest have several stations below average, and there still is another week of no precip coming. Without substantial storms, several days above normal, this hole being dug in December may very well set up both regions for a below average water year. It is early, but anomalies in mid-December are statistically relevant for predicting the April 15 finals.

The flows out of Priest Rapids are unusual; the intra-day shaping is pretty much ended.

Imports from Canada are strong suggesting a strong cash market and/or weak loads in BC.  The AC jacked TTC yesterday, but strangely, the flows didn’t approach those levels. Apparently, the trans rights holders didn’t know they could flow more. For all of the “sky is falling” comments about Socal Gas, it is absorbing that flows out of ZP  are about half of what they could be. Why isn’t that line full? Why aren’t the NP generators selling that $2,90 PG&E Citygate to SP via Path 26? And finally, Palo is yawning its way through the LA crisis by cutting its exports – go figure.

We think the dry weather across the hydro producing regions is the most relevant news of the day. The weather outlooks remain bearish, but our sentiment is based upon a combination of fundamentals and market prices. In a post to follow shortly, we’ll merge those to perspectives.