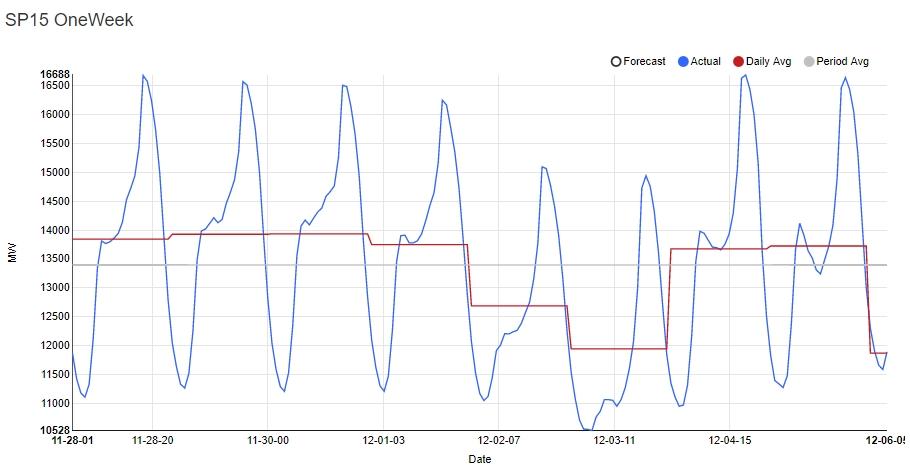 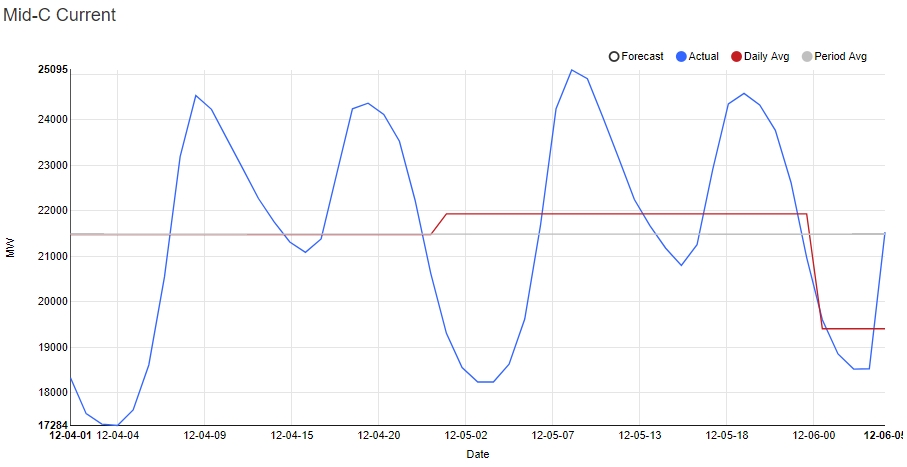 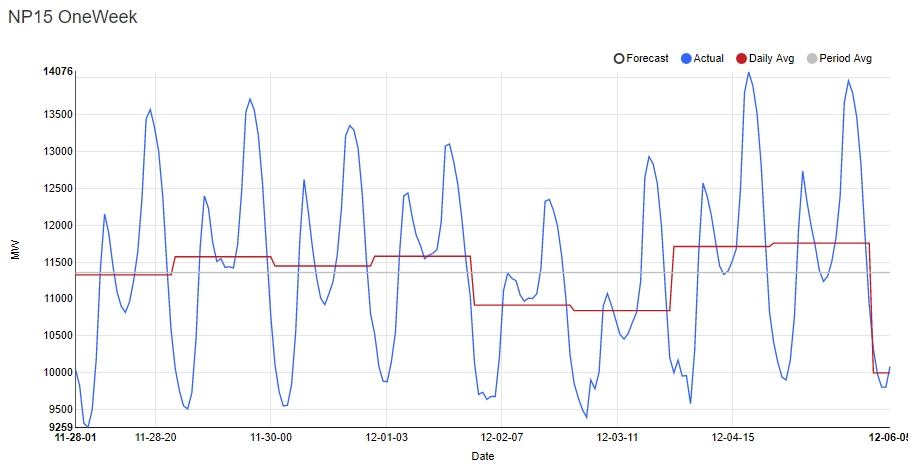 Average NP daily demand also saw a small increase day-on-day as 47 MW was added on top of Monday’s average.  Peak loads fell nearly 120 MW however, but that difference was partially made up by the 330 MW increase in light load.

Mid-C gets the brunt of the cold weather, though that still equated to just two stations falling below normal.  The rest of the west is above normal, especially SP-15 where all stations sit at least 4 degrees above average. 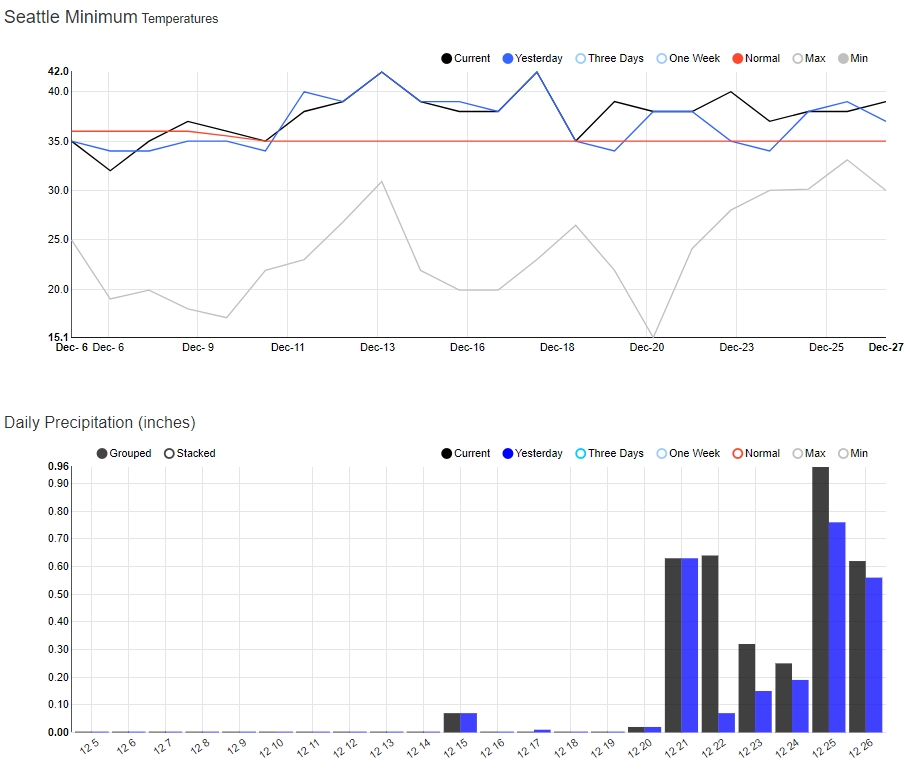 Seattle minimum temps will fall to 32 tomorrow, four degrees below normal, but the big story is the incredible lack of precipitation over the next two weeks.  Just a single day shows up with measurable precipitation from now until the 20th, and even that falls under a tenth of an inch.  Rain picks back up as climo takes over the forecast, so watch for that to change moving forward. 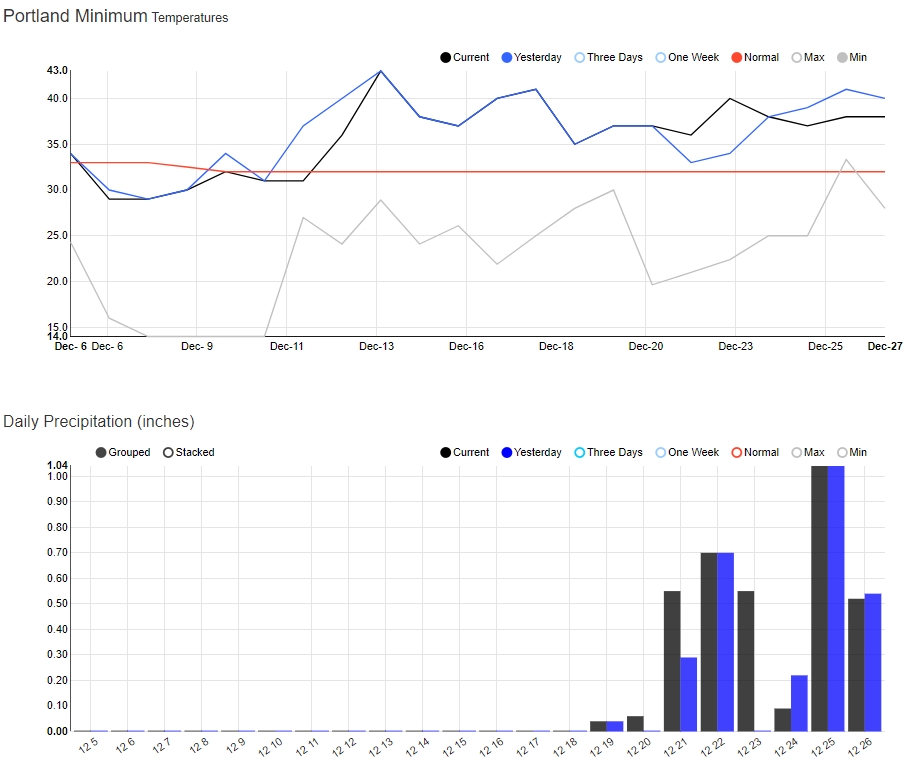 Portland looks even drier with no precip until the 19th.  Temps are colder as well as tomorrow should see lows fall into the 20’s with a low of 29, four degrees below normal.  Things should warm up next week however, where minimum lows are expected to jump to 43, 11 degrees above normal. 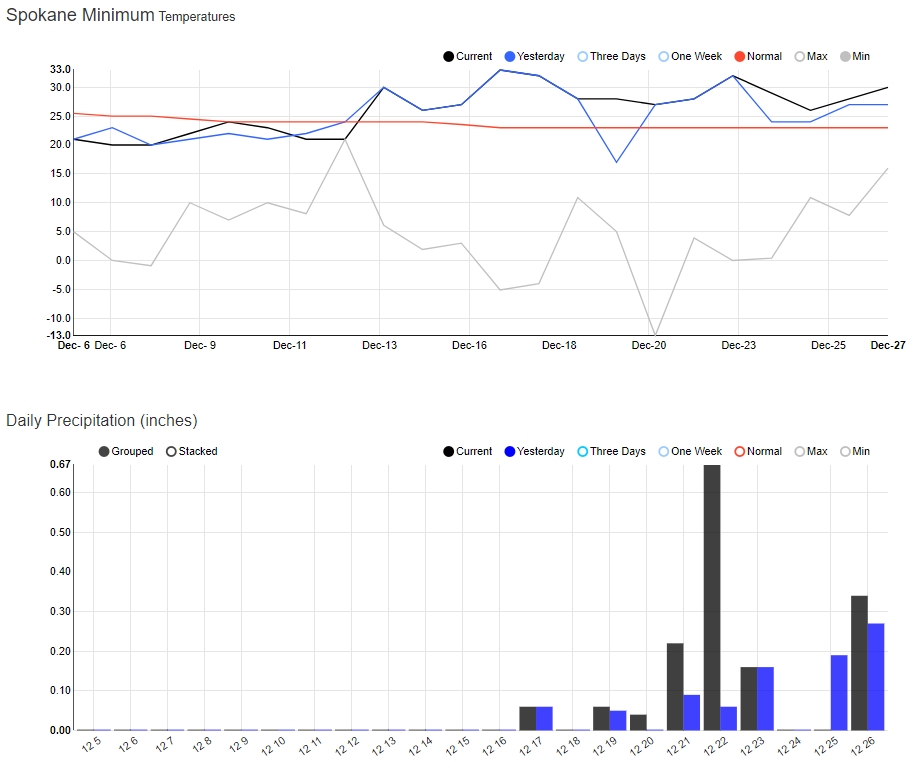 You’re likely seeing a pattern at this point, the Northwest is going to be dry for the next two weeks.  Spokane gets lows that will fall as high as five degrees below normal over the next week before again warming up.

Billings stood out as the station with the largest temp anomaly, and with one look at the minimum temperature chart, it’s easy to see why.  Daily lows jump into the 30 beginning tomorrow and should stay there for a week, eventually peaking at 38 on the 11th, 20 degrees above normal.  Temps aren’t expected to drop below normal again until the 25th.

Jumping into NP we quickly see the warm up as daily highs soar into the high 60’s for each of the next seven days, reaching 69 several times, and up to 11 degrees above normal.  The 11th through the 13th also show potential to set a new 10-year high.

Sacramento won’t get quite as warm as San Jose, but it should stay above normal for a longer period.  Highs will sit comfortably in the low 60’s for at least a week, before falling into the 50’s for the remainder of the month.  The largest anomaly should hit on the 13th at 10 degrees above normal (64).

A return of 80 degree highs look to be on their way for Southern California as the 13th checks in with a forecasted high of 81, 14 degrees above normal.  Keep an eye on a potential sharp decline in highs by the 19th.

San Diego has an even larger anomaly, especially compared to yesterday’s forecast as highs eventually build up to 81 degrees by the 12th, 16 degrees above normal and eight degrees warmer than projected yesterday.  Temps should eventually work their way back to average by the 20th.

Phoenix is moving the opposite direction as the forecast call for below normal temps by Friday, four degrees lower than projected yesterday.  Highs should eventually climb back into the upper-70’s by next week, leading to an 11-degree anomaly.

Denver will jump from a high of 37 tomorrow (10 below normal) to 62 two days later (15 above normal).  Highs should stay above normal for the following 12 days until again falling below average by the 22nd.

Heavy increases for the 10-Day RFC forecast over the next several days where as much as 1,200 aMW was tacked on compared to Monday’s forecast.  STP follows a similar path, though begins the forecast lagging today and tomorrow.

Libby was the biggest mover dropping just shy of five feet week-on-week, though it remains above most levels on the same date from the previous five years.

After setting new minimums for much of November, Libby now sits just slightly below the 10-year average in terms of elevation.

It’s obviously still very early in the snow year, but the early season gains that showed up in November have all but been wiped out through much of the NW as the Grand Coulee production basin dropped from 240% of normal to 85% over the past three weeks.

The California hubs check out at a similar, if not lower level as NP and SP show 70% and 79% respectively.

Hydro outages have basically held steady at 3,300 MW for the past week, and remain largely unchanged since mid-November.  Gas outages increased over the weekend before seeing returns yesterday, finishing the day at 6,566 MW.  Wind outages have more than quadrupled since the beginning of the month, and are now the 3rd highest source of outages at 481.