Winter has arrived once December becomes Bal-Mo; the Christmas lights are a blazing, and the earth’s northern hemisphere enjoys the fewest hours of sunlight and has high, if not the highest, odds of extreme cold. And then there is this year, nothing in any forecast, from Denver to Seattle, has any hints of those extremely cold days. There are some records broken, however, but these are mostly from the warm side and are all in California. Where last week we saw hints of low 30s in the LA Basin now we see record-breaking highs, but those are just mid-70s and warrant no alarm bells. Before going into those forecasts, let’s examine the cash markets:

Socal Gas Citygate is the hub de jour setting nationwide highs off of import problems at Needles, CA caused by an explosion on the Transwestern pipeline. SCG has no scheduled return date, but with warmer weather in the latest forecasts, the impact on price from the lost capacity should be lessened. The other western gas hubs remain weak and flush with gas.

Day Ahead peak hourly prices are off, week on week, and mostly just weak.

This is the same chart but zoomed in on the last two days. Palo is congesting across the peak hours, but all hubs trail SP’s price, which is 100% driven by those $5.00 spot prices. We noted SCG had one of its most significant withdrawals from storage over the weekend:

The LDC pulled about 250 MMCF from storage for two consecutive days, perhaps in anticipation of high retail gas demand. The chart is a bit less impressive when compared to the same draws last year:

The current pulls are but half of what the LDC took from storage previous year, and storage levels are higher this year.

We mentioned earlier that California has grown warmer in today’s forecast; we should have said it has grown a lot warmer. All three cities approach 10-year highs later this week and note the positive anomalies in Burbank’s minimums; every day is above average, most are nearly ten degrees higher.

The WECC interior isn’t much colder; there is no cold weather anywhere. 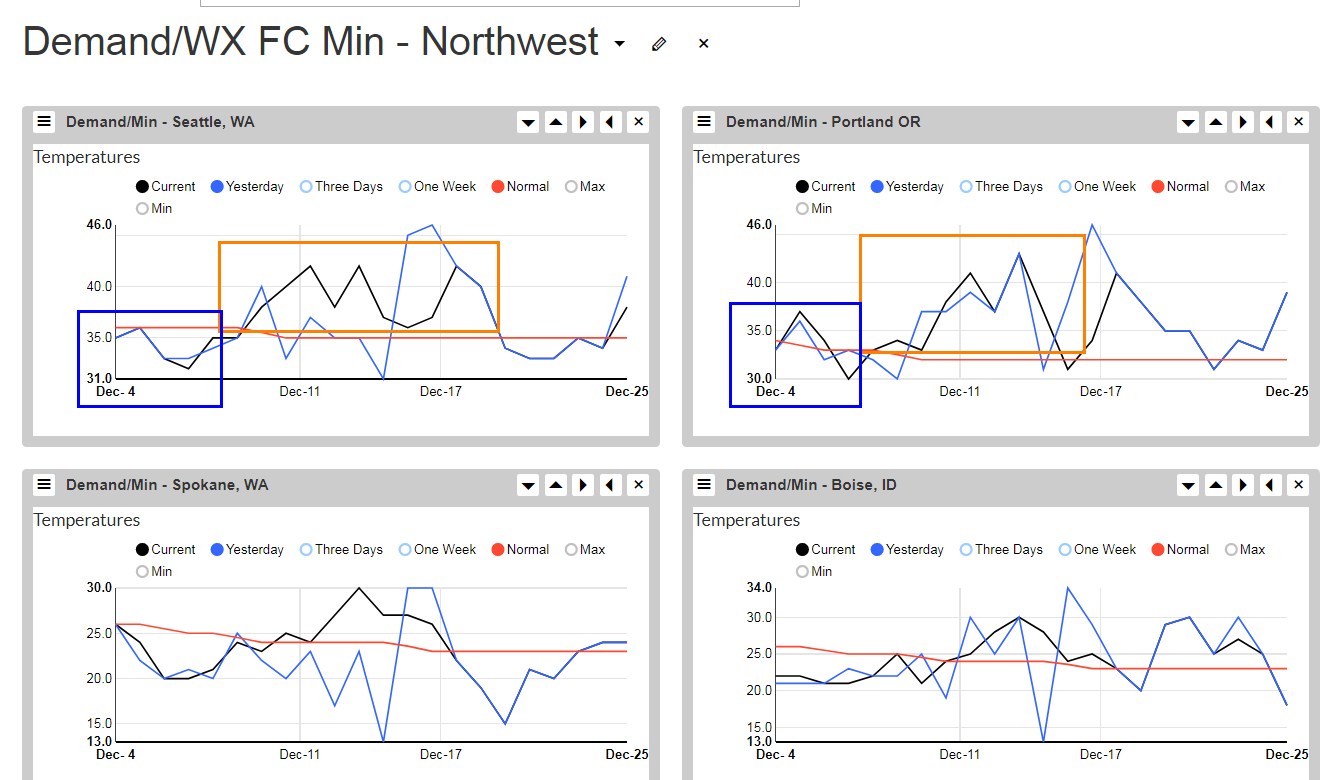 The “cold” in the Northwest will be soon replaced with positive anomalies which are a reversal from the Friday outlook. Call it slightly bullish through this week followed by nearly ten days of warm anomalies.

Yesterday’s temperatures, across the WECC, were mild, at best. 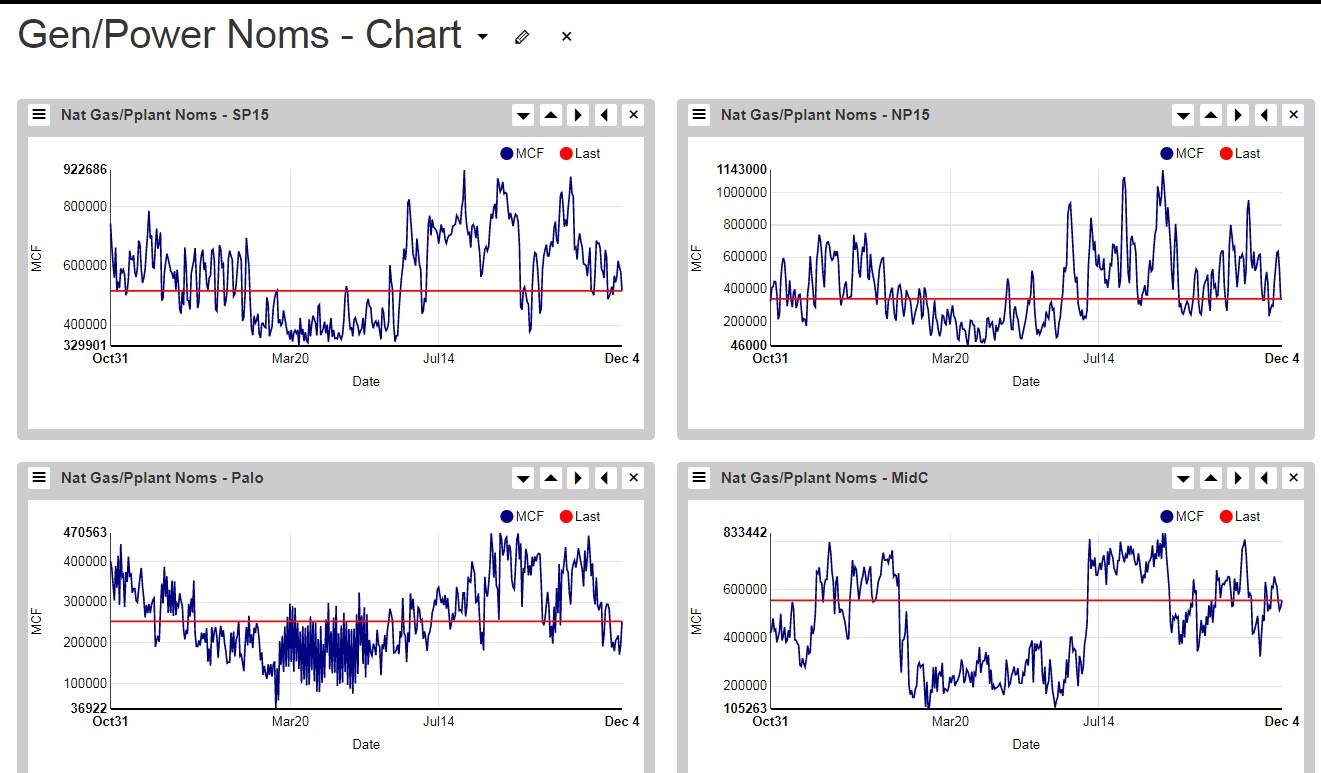 Both NP and SP saw gas noms fall, so did Palo, while the Northwest noms remain relatively high given the warm weather. 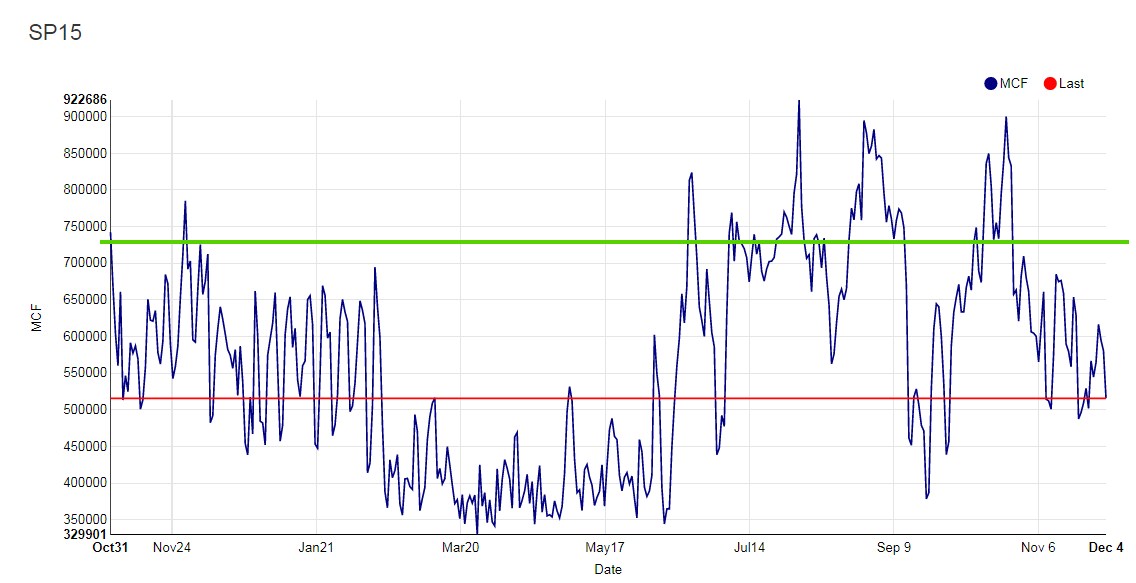 This chart compares gas noms at SP versus last year (green line); makes sense this year is much lower given Socal Citygate prices; the hub prefers importing electricity over generating, but it only takes one megawatt of SP gas online to set price. 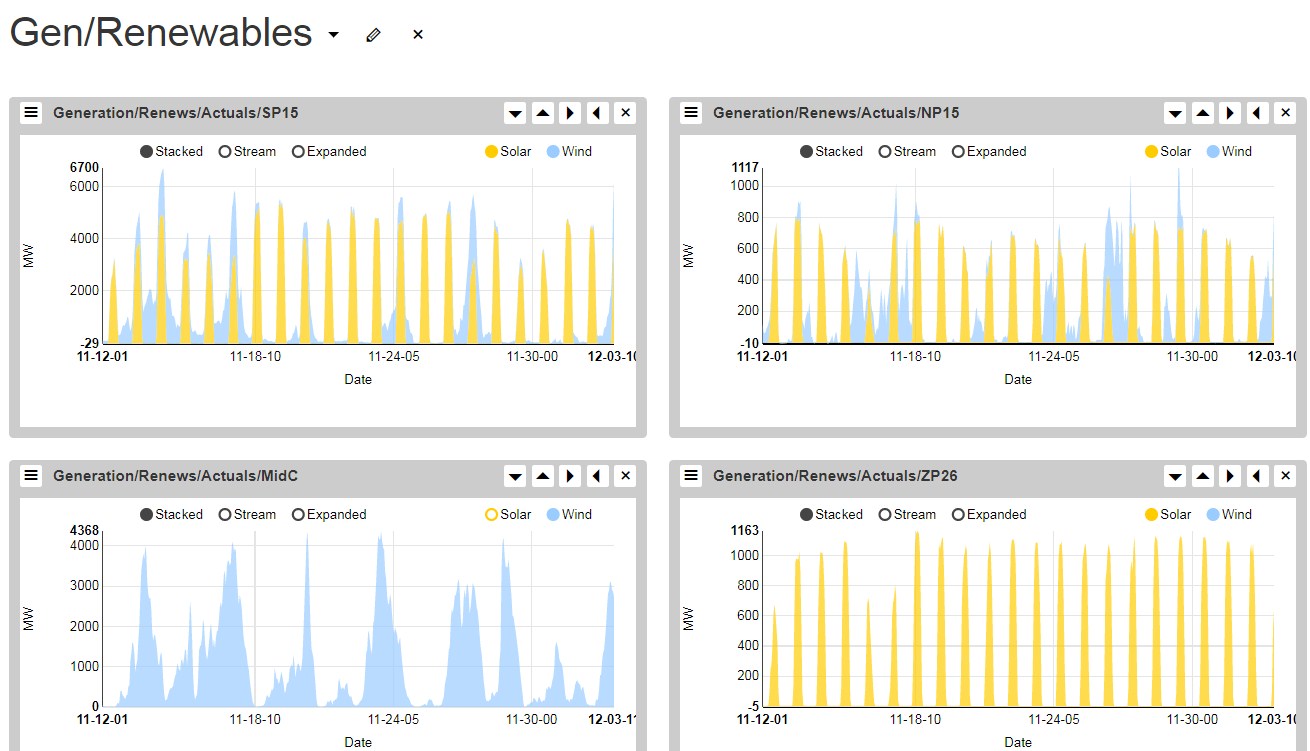 The wind has been spotty and total renewables inside the ISO are off week on week. All the nukes are at 100%. 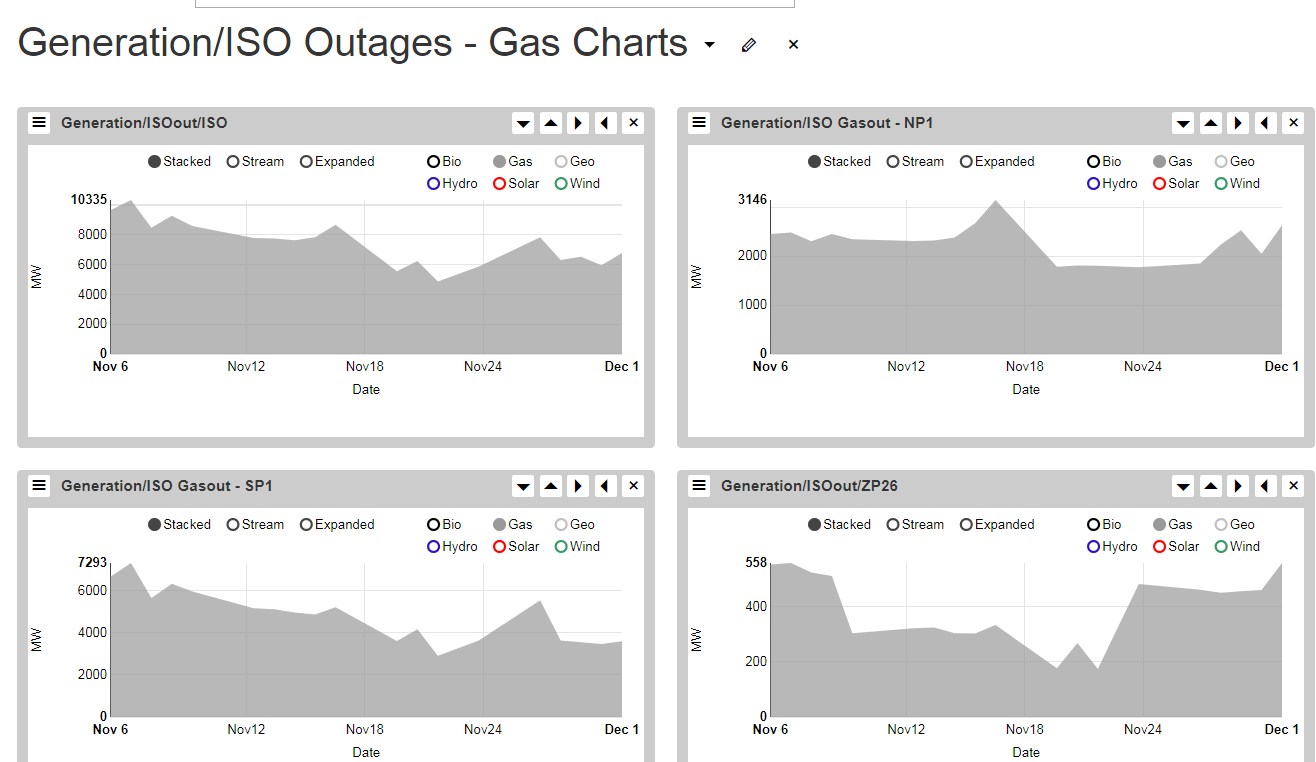 Total ISO gas outages are also off, week on week, though ZP is up a unit or two. 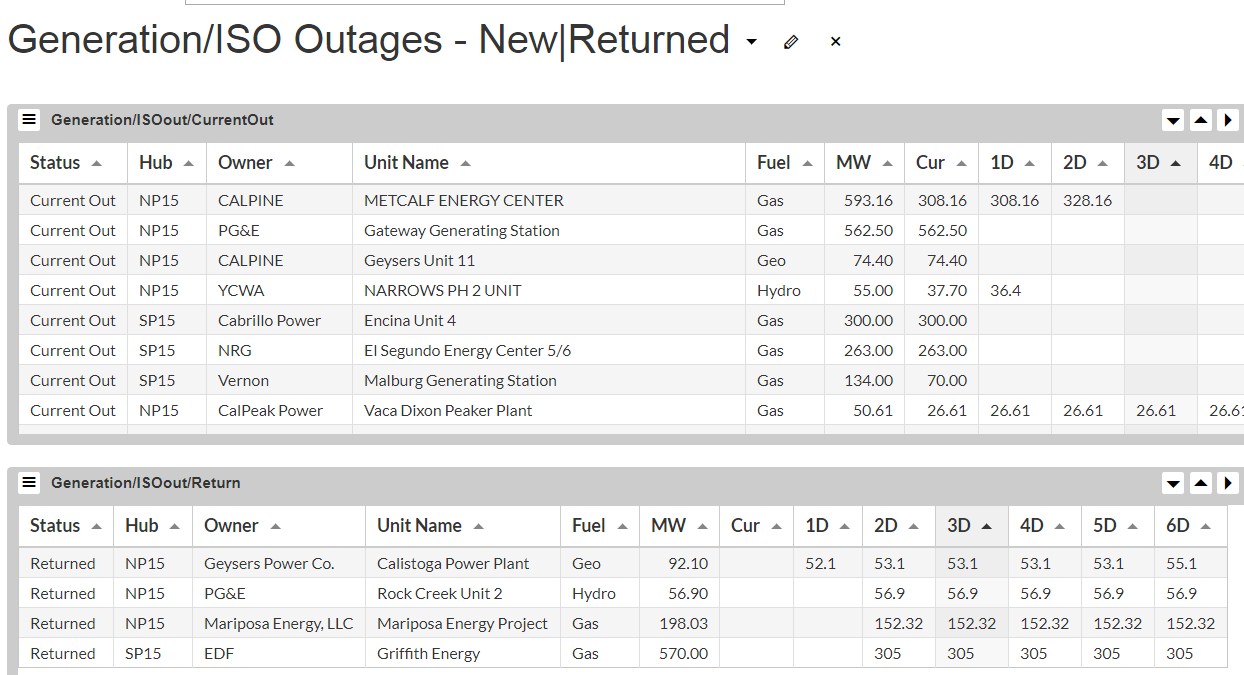 The top table is new outages; the bottom lists the major units that returned. We suspect we’ll see more units returning now that winter has arrived.

We think the SCG Citygate spot gas prices are the most significant fundamental today; in second place is the very dry outlook in both California and the Northwest:

California’s next storm is in the 11-20 day period; the Northwest is also dry:

This is the first time in this water year we have seen ten straight days of no precipitation in the Northwest. Snow anomalies are already below average at many stations:

This outlook will further exacerbate the outlook. These numbers are growing increasingly important as we are now just a month away from the COE’s first Flood Control targets. Given what we have on the ground today, and what won’t be falling from the sky over the next ten days, we’d be expecting low 90s for TDA/GCL in that initial report due out in early January. That would suggest a very modest draft which is bullish Mar-April and bearish  May-June.

Aggregate reservoir levels are slightly below normal at BC and just average at the MidC, while California is well above its five-year averages.

Hydro energy output has rallied over the last ten days, but we saw a decline in peak generation over the weekend and expect that downward trend to continue.

Flows on the Pit River have plummetted to the lowest levels since last year. All the other projects are just average.

Flows on the Columbia at the border are below average despite a healthy drafting of Arrow. The declines on the upper Kootenay reflect a general drying following the recent rains.

The cuts on the Pend Oreille jumped out, while the Clark Fork flows have steadily increased; together, it means Lake Pend Oreille is filling.

Energy output at Coulee has jumped because BPA quit filing Lake Roosevelt. We expect these levels to hold or come off as inflows fall off of dry weather. 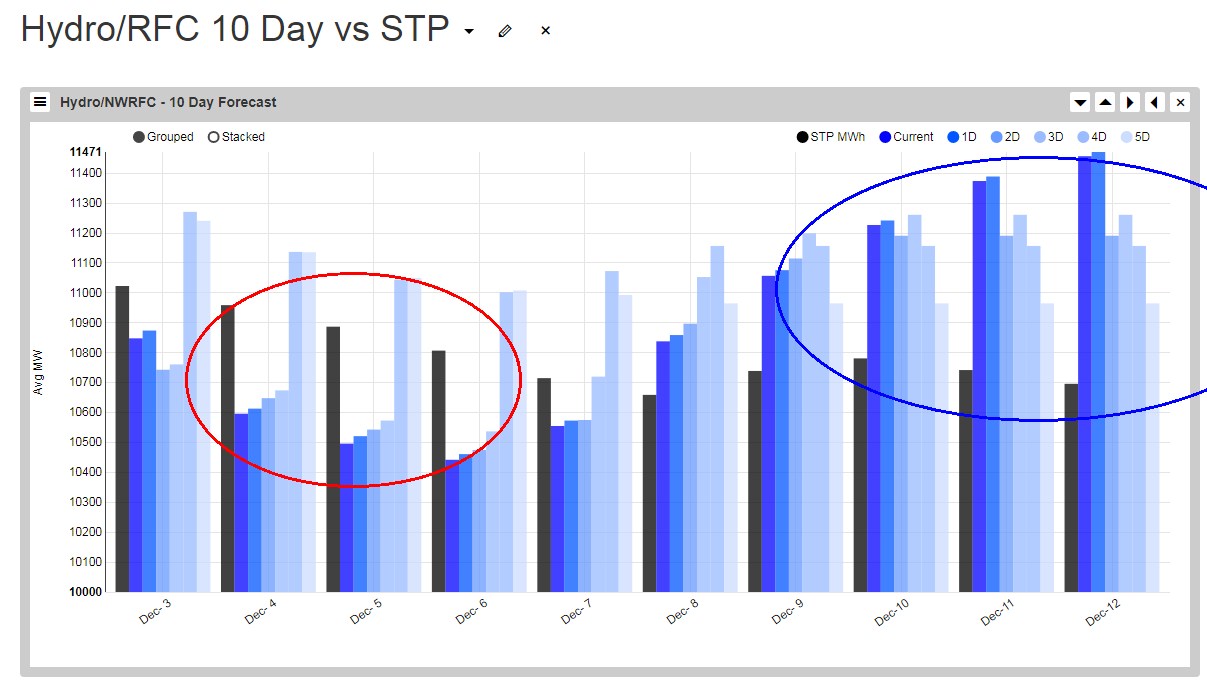 The NWRFC has two opinions to share: First, they tighten up the next five days; Then they “flood” the Northwest with energy. We doubt either happen to the degrees reflected in the above. The back-end of this chart suggests a bearish BOM STP for today, but we don’t see that given zero precip over the next ten days. 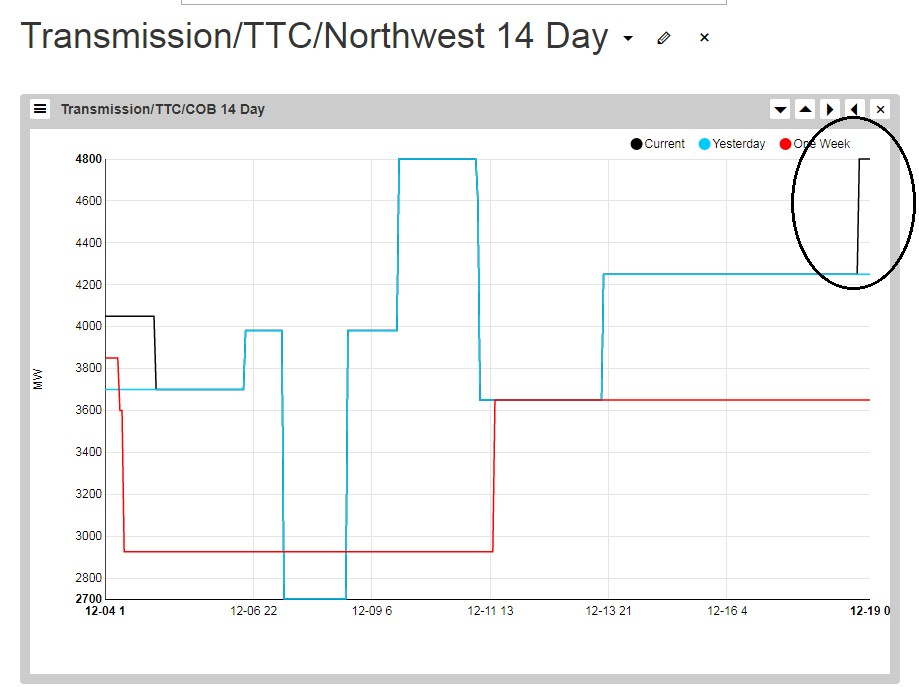 BPA bumped its export capacity by 600 MW (from last week’s forecast) on the AC line.

Northbound flows on the Northern Intertie hit seasonal highs over the weekend.  Southbound flows hit TTC levels more hours than they didn’t and note the cuts on the Palo to SP path — that was driven by the steep congestion prices.

There is nothing compellingly bullish in today’s outlook. You could argue mid-5s at SCG Citygate is very bullish, but if you are trading heat rate is just the opposite – very bearish. Naked price, sure, the hub is clearing at significant numbers, but we are more focused on heat rates as we prefer not to be gas traders.

The dry outlook has more weight in our eyes than SCG’s gas prices. We were already getting biased long last week, now we are more so, but our real sentiment will be determined by the market settles; after all, everything is relative, right. More on that in a subsequent post.