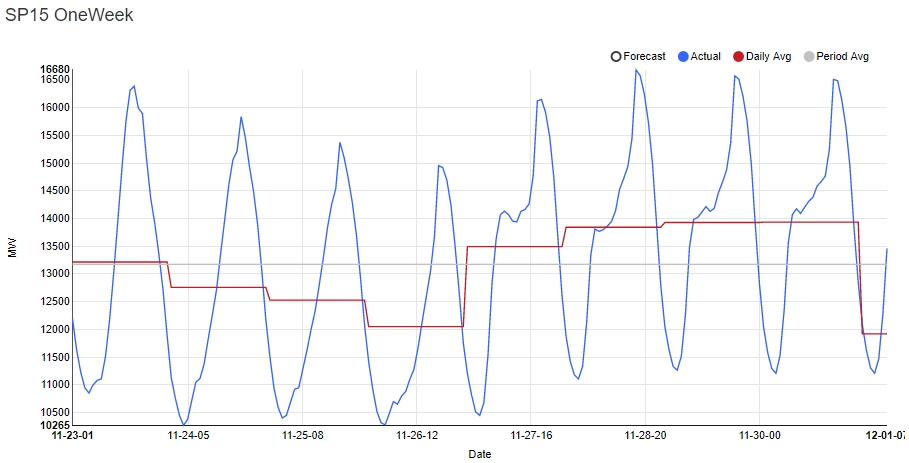 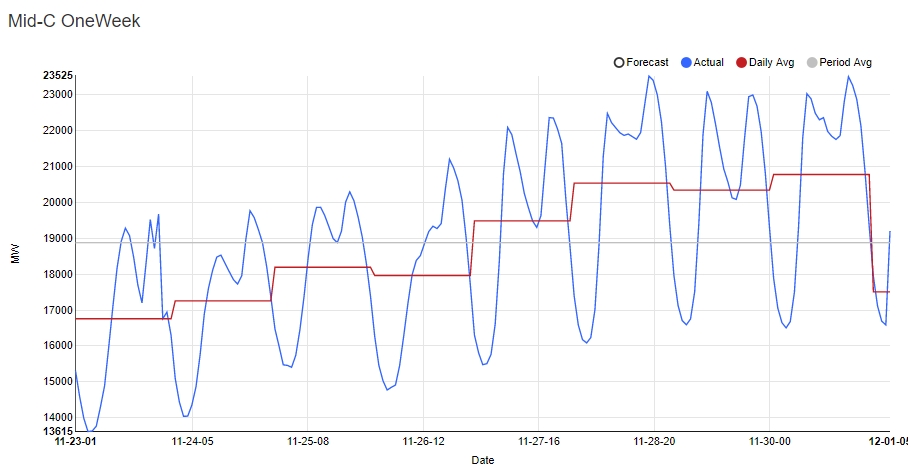 Mid-C had a day-on-day increase of 434 MW in terms of average daily load, largely thanks to a big jump in afternoon demand.  Loads are up more than 4,000 MW week-on-week as well. 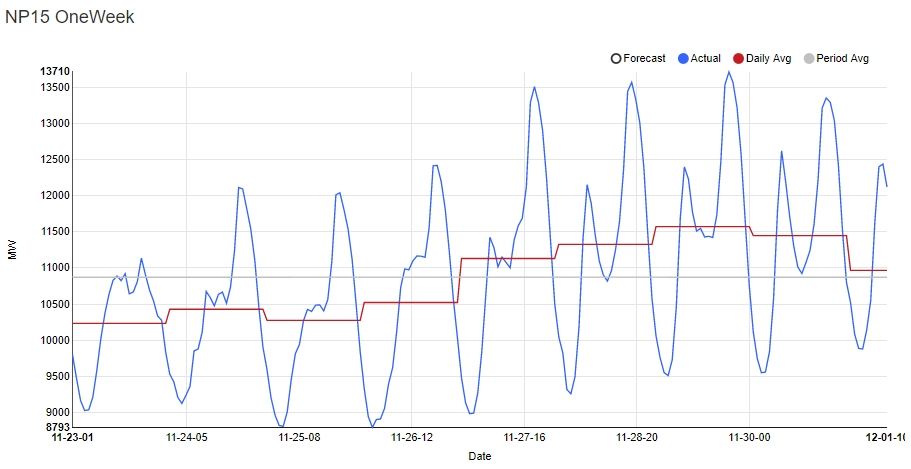 Warm in the Southwest and slightly cooler than normal in the Northwest over the next ten days.  Burbank pushes north of 5 degrees above normal while Boise shows the coolest forecast at just under average.  The eastern side of the Rockies looks to be the warmest however, as Denver and Billings get 7+ degree anomalies.

Billings gets a reprieve from below-normal lows for the next ten days as most nights should stay 10+ degrees above average.  A cold spell looms soon after however, as temps plummet to the single digits by the second week of the month.

Look for a 20+ degree swing in daily highs for Denver as temps move from 64 on Sunday to 41 by Tuesday.  Daily highs should settle mostly below normal following the weekend’s warm up. 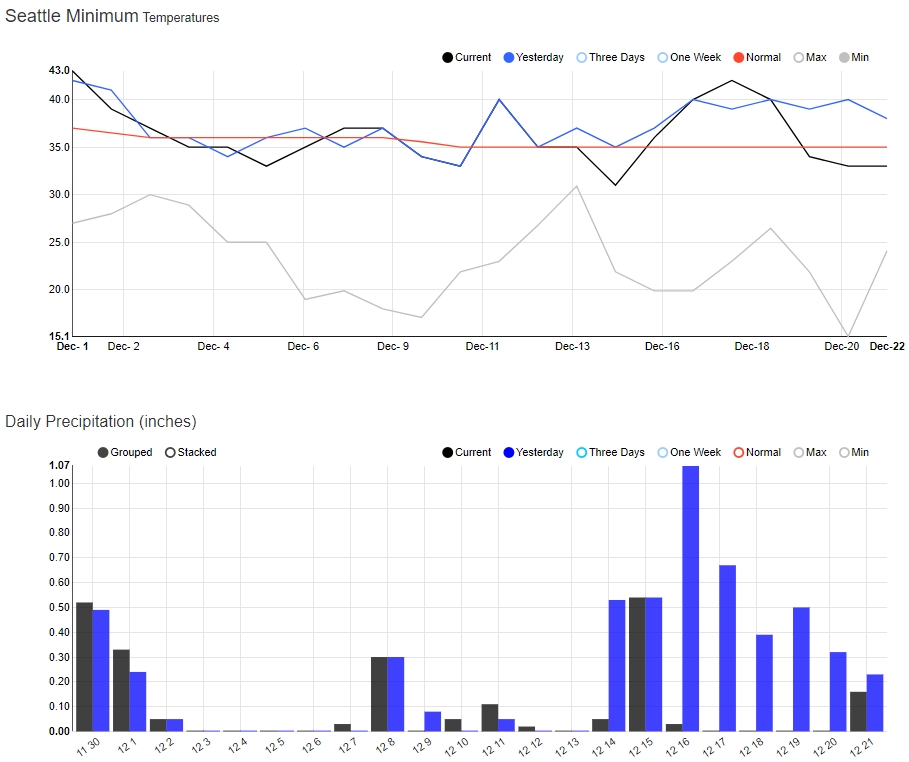 Seattle minimum temps are on pace to drop just a degree above freezing by the 6th — three degrees cooler than forecasted yesterday.  Those hoping for snowpack to come with the cooler temps may be disappointed as the area looks dry for five days straight.

Portland gets a few degrees warmer though the weekend before dropping below yesterday’s forecast as we move into the tail-end of next week.  Daily lows will fall into the low 30s, and eventually hit 30 by the 7th, three degrees below normal. 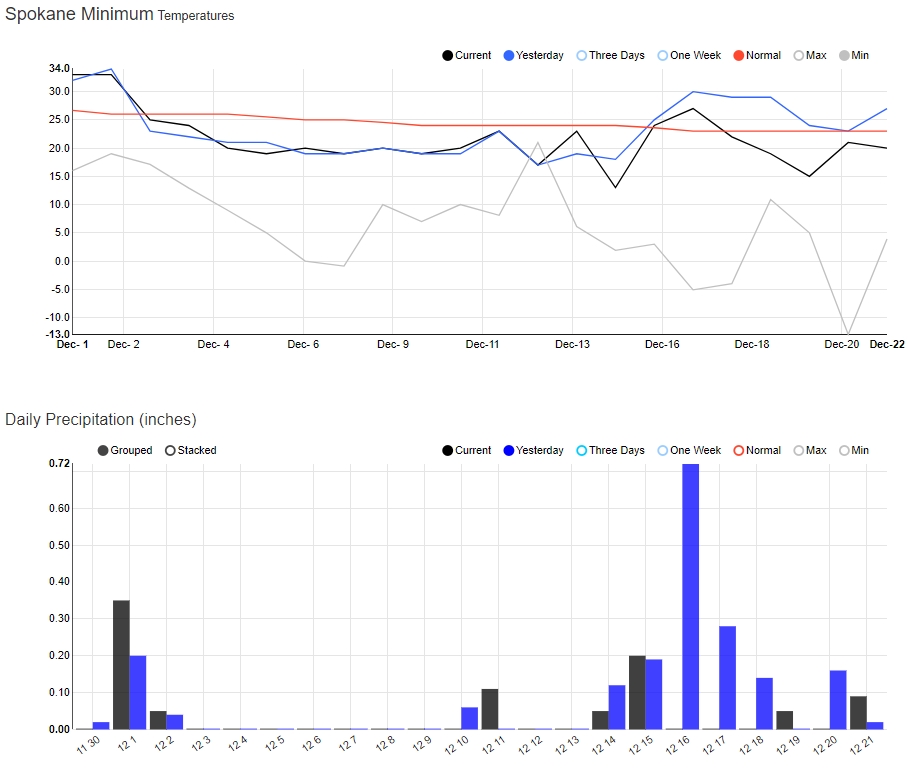 Cold and almost entirely dry for Spokane following the weekend as temps fall into the 20’s and dip into the teens for all of next week.  The forecast calls for below-normal temps through the 17th.

San Jose’s forecast is looking much warmer late next week where the 8th saw six degrees tacked on to its high, ultimately reaching 69 degrees (10 degrees above normal).  No below-normal highs are forecasted until the end of the forecast.

There won’t be any new 10-year records, but Burbank could climb into the high 70’s by the end of next week as the 7th calls for a high of 79, 12 degrees above normal and four degrees warmer than forecasted yesterday.

Beginning today, expect two consecutive days in the 80’s for Phoenix, culminating in a high of 81 tomorrow, 13 degrees above normal.  Highs drop quickly however, as the 5th shows a high of 68, just at normal, and four degrees cooler than forecasted yesterday.

The 10-Day RFC forecast shows up with nearly 700 aMW cut from today’s forecast, and over 800 from tomorrow’s. Things slowly ramp up from there, though the forecast remains below yesterday’s forecast until the final day of the forecast.  STP crosses below the 10-Day by the 7th. 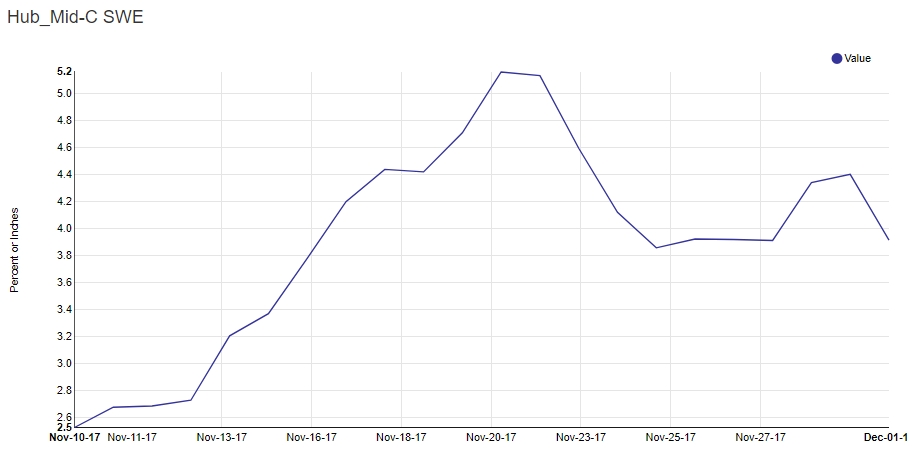 Mid-C saw a quarter of its snow-water equivalent melted during the warm up over the past week and a half.  A modest half inch was added last week, but nearly all of that was negated overnight.

Hydro and Gas both saw returns yesterday with 340 and 560 MW added online respectively.  Wind also had large returns moving from 479 MW on the 28th to just 65 MW by yesterday. 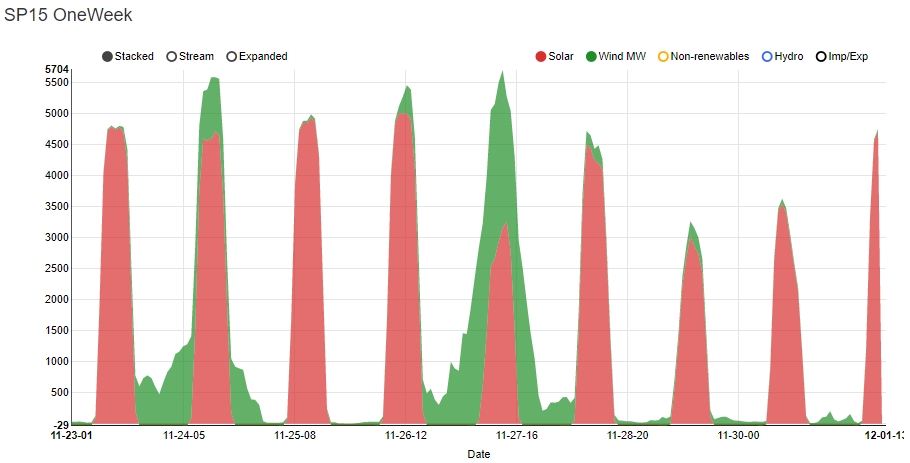 After two consecutive days of subdued solar generation, today looks much more promising with 4,718 MW as of 11 AM, up nearly 1,200 MW from yesterday’s peak.  Wind remains mostly non-existent since exploding on the 27th with over 2,500 MW.