On Mondays, we take a stroll through the front of the curve, currently defined as Prompt through August. Our map is APT (Algorithmic Power Trading) which ranks all traded WECC products against each other. The tool is equally “apt” for both hedging and speculating. 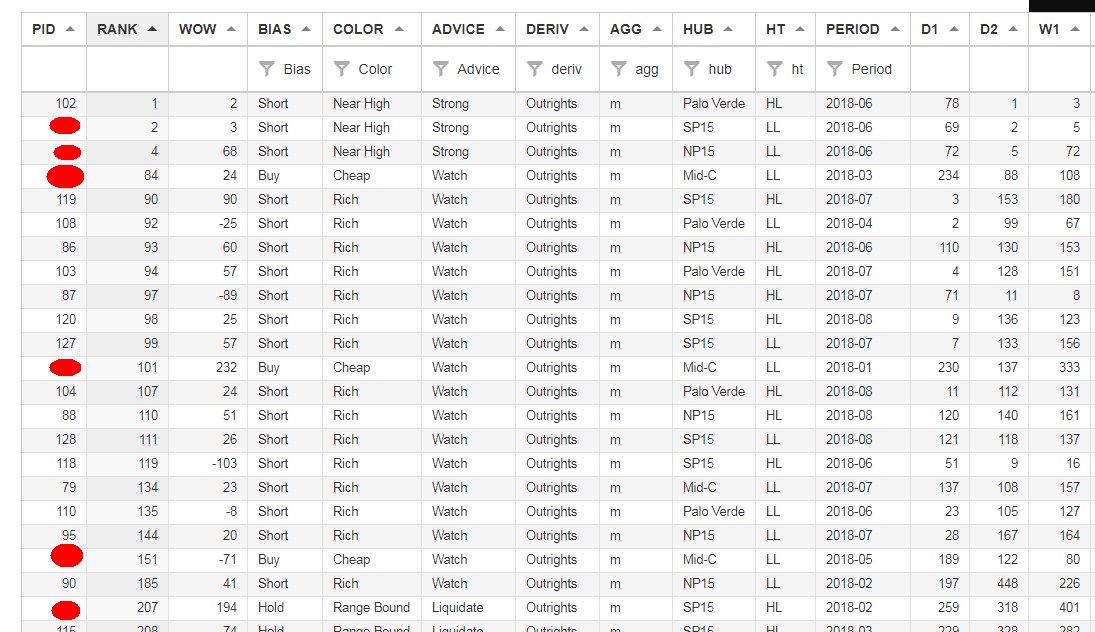 The product IDs (PID) highlighted are the ones we culled for today’s conversation. After opening APT, you will note a “URL” icon to the far right; click that, and you will be taken to Trade Rank, which is a plot of the last year’s settles and forecasts for that date. 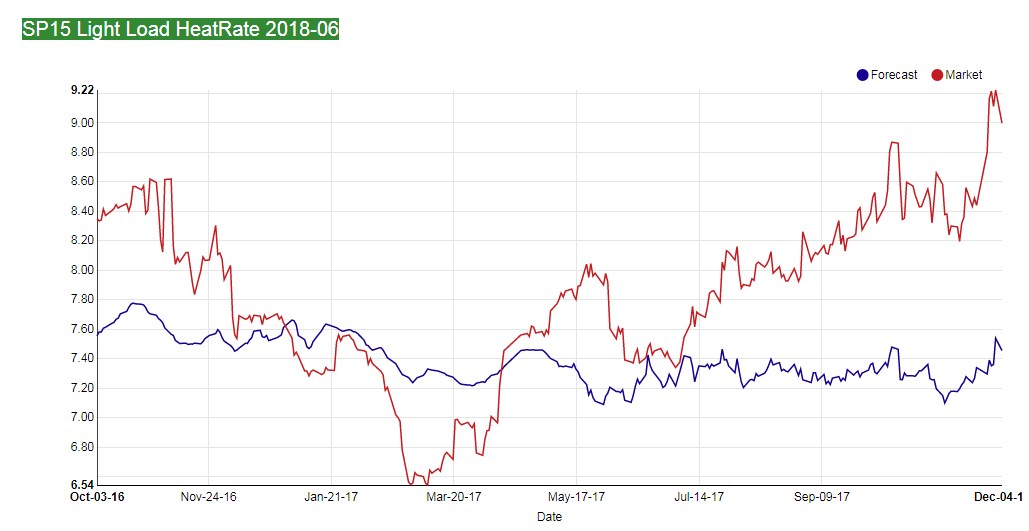 All things, or we should say, most things “SP” have been on fire of late, especially June 2018 off-peak.  There must have been a paradigm shift in value because now the product hit contract highs and came off a touch. It needs to come off a lot more before it gets close to value. We suspect the Socal Gas issues have made the entire SP curve go bid, even though some of those problems will be resolved well before June goes to delivery. And, since the above is reflected as heat rate, the gas impact should be minimal. Most likely, someone bid up the power price without looking at gas prices, which have not moved that much, resulting in the heat rate soaring. 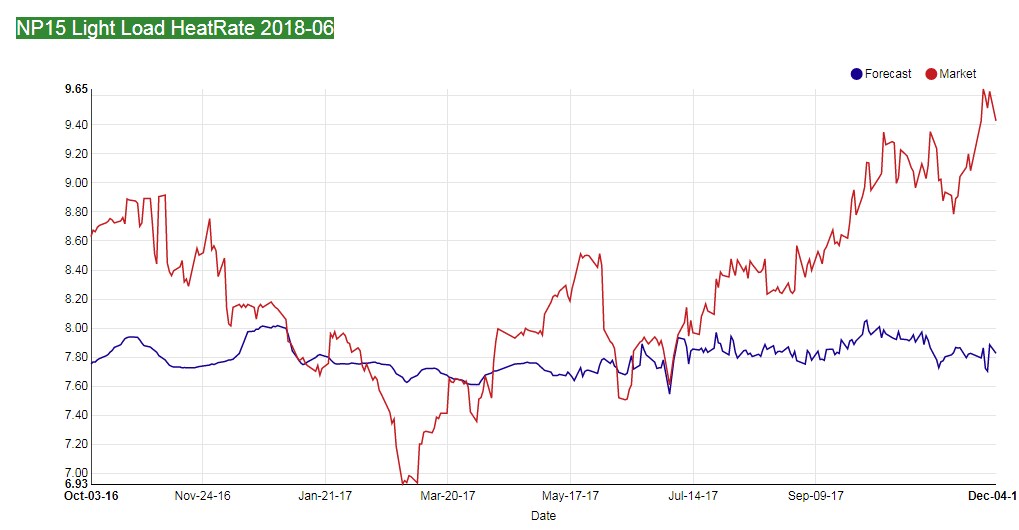 Same trade, June Light Load, but this is at NP15 where there are no gas issues. We can get how NP could be more bullish with a massive SCG/PCG gas spread — SP will import more power which puts upward pressure on the adjoining hubs. That may be true, but it is not true in the off-peak where even now many of those hours are not fully loaded. I like shorting this more than SP just because it has no rhyme, reason, or fundamental to support these levels. 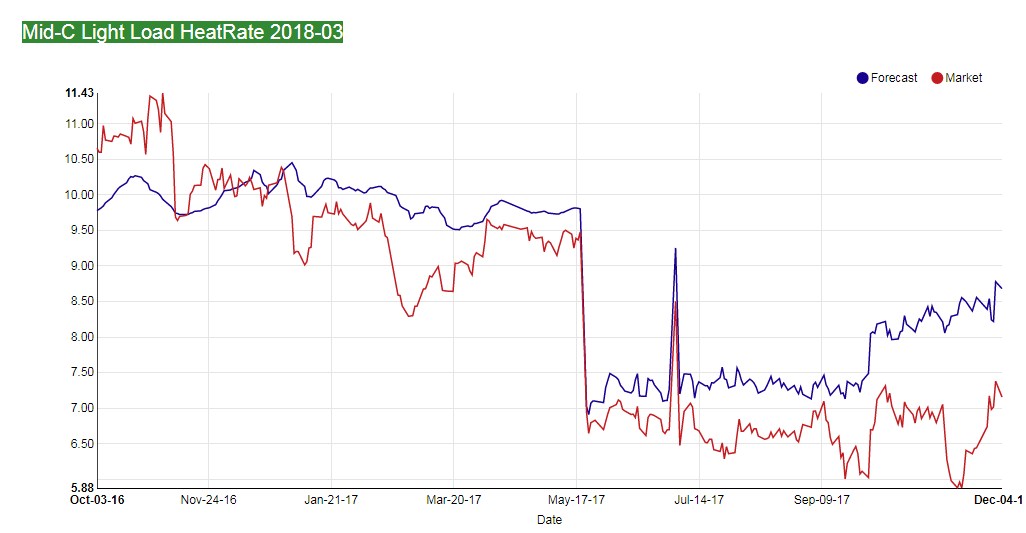 We wrote about this a few weeks back, from the buy side; now it has rallied back to its 120-day average. Party over, right? Maybe not, especially if the Mid-C stays dry for December; that would drive the Corps to minimize required draft, some of which occurs in March. All of which could make for a relatively tight market, especially when compared to last year’s freak show. As we said earlier, our sentiment grows more bullish on Q2 Mid-C with each passing dry day. 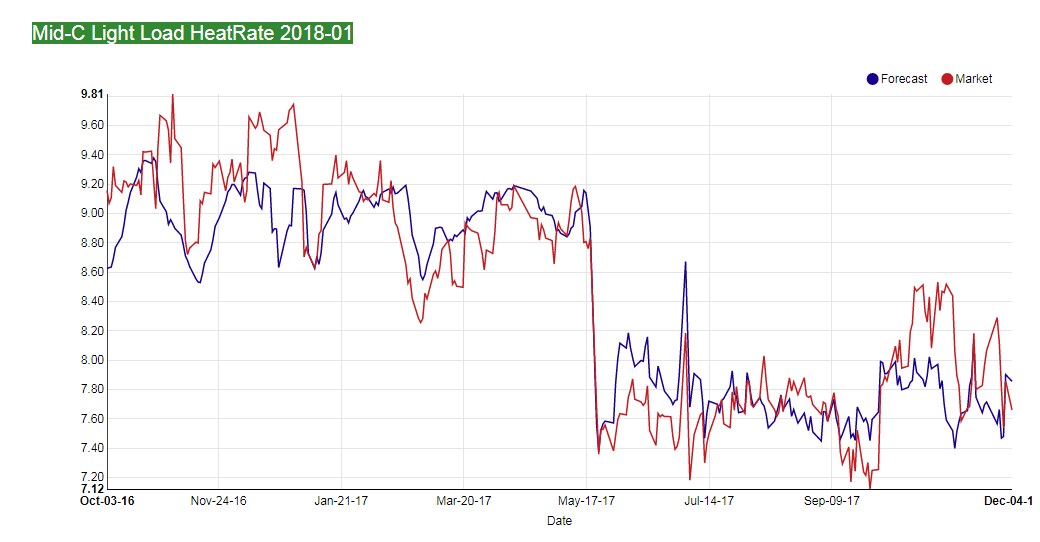 The January MidC Offpeak has been volatile; after hitting contract lows, it soared 1500 btus in the face of some very wet weather. Now it is drying out, and the product is falling – go figure. It’s now trading at the 120-day average, but if you go back to the 350-day average, it is still cheap. All you need is a snappy cold snap in Dec to make all things Jan MidC soar but, alas, there is no cold snap, snappy or otherwise. 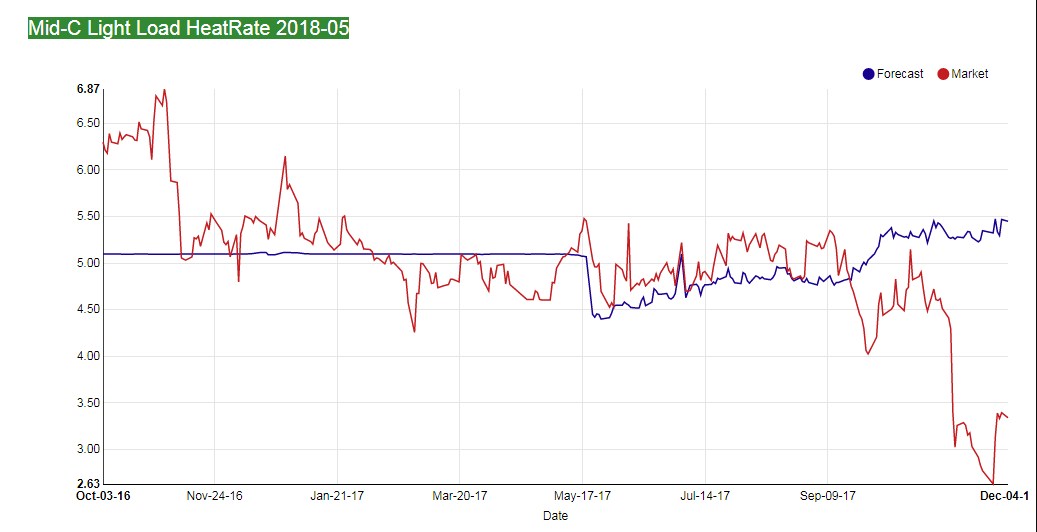 We wrote about this last week, from the buy side, because it was so cheap. The market must have read the blog as it has rallied, yet it remains very cheap. The impending dry spell doesn’t help the position, however, because lessened March-April drafts implies lessened May-June refills. Dry also means less overall volume, too, but we think that is more bullish for June than May. Way too early to start playing “pick the month” game, but we’d buy anything cheap at MidC during the runoff months. 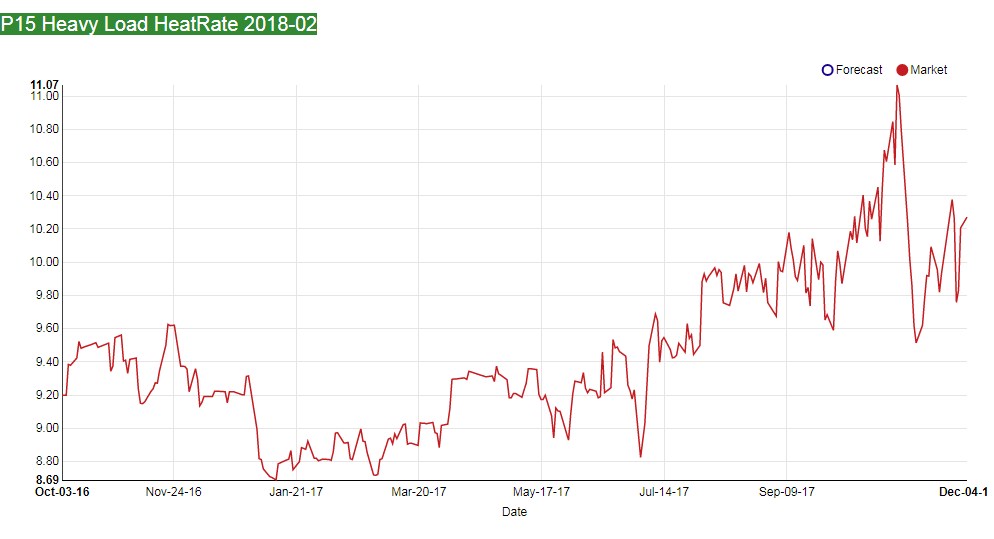 This is the SP15 Feb HL; we also wrote about this from the short side. The market reversed its blunder, now it is probably closer to value than not, but does make for an interesting chart.

The following chart came from resorting on WoW (Week on Week change in Rank); doing such puts the most significant moves at the top or bottom; sorted descending returns the products moving up in rank; ascending are the falling stars. 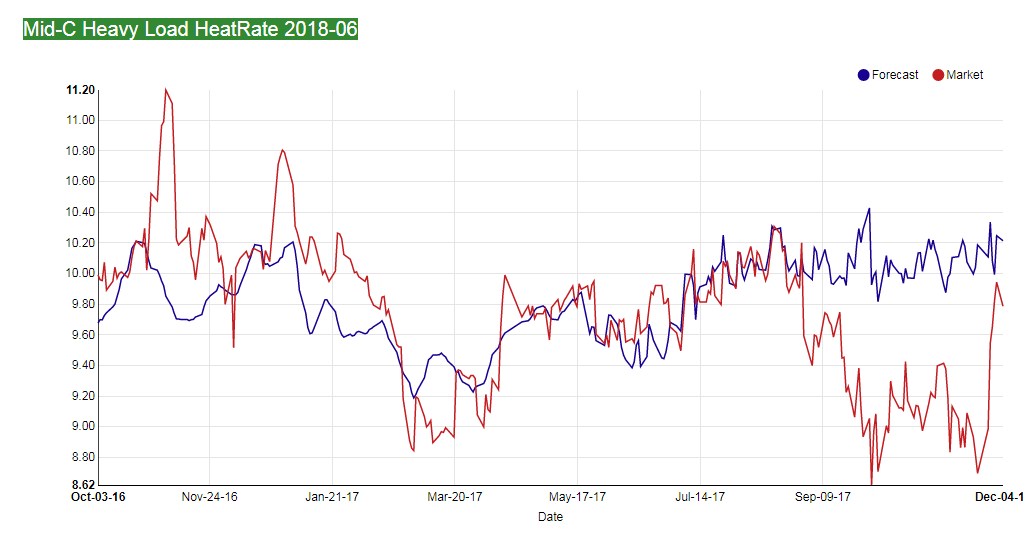 This is one of the “Falling Stars,” the June HL MidC. Where the market had no love for the MidC a few weeks back, it now can’t get enough of it. The move also crushed our ranks, falling 169 places in a week: 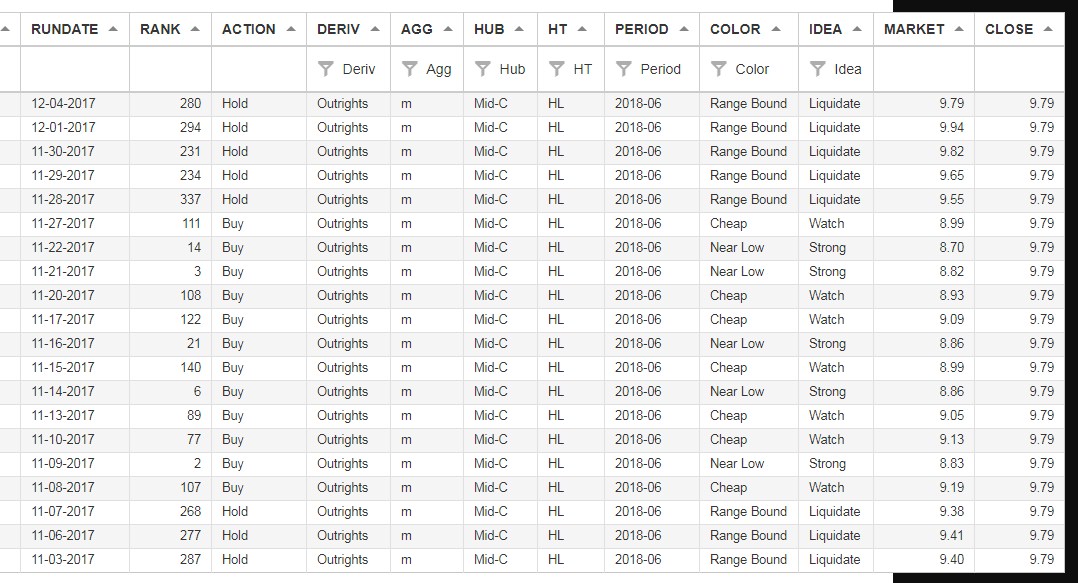 For about two weeks APT labeled the June MidC HL a strong buy; now its a liquidate. That said, we’d be watching these precip forecasts closely as the product is not close to being a short, implying there may be some juice left in June Juice.