The big news in the WECC remains the Socal Citygate gas prices, which seem to be increasing daily, though the power price at SP isn’t following and the SP heat rates are plummetting.

We also took note of the strengthening of Northwest gas prices; these rallied $0.37/mmbtu over last week; perhaps in anticipation of cooling weather. Weather in Calfornia is warmer than the Monday outlook, and that is bearish for the Citygate, but the market seems not to care. Let’s examine the Dec contract:

Wow, that’s volatility, and the market sensed the impact of the Needles outage on the day of the outage, Oct 1. But, it seems, only recently has the market considered the possibility that the loss of that 700 MCF could perhaps be Nat Gas Armageddon as it has almost doubled in price over the last two weeks. There is a hint that the LDC/Pipeline won’t have a fix in place for a year or more:

The above is the 2018 Dec contract; note the spread to PG&E Citygate blew out there, too. That is a bold bet, betting that it will take 15 months to return Needles, but we aren’t gas pipeline engineers and offer no thoughts on when it may return; Socal doesn’t provide a return date, either. One point of caution, we suggest, are the words used in Socal’s Aliso outage report:

“Withdrawal from Aliso canyon is discontinued unless needed for system reliability.”

The key words there are “unless needed for system reliability”. A $3.00 spread to PG&E Citygate would imply the system’s reliability is in question every day of December, and we would infer from their own words that the LDC will pull gas, up to 1.8 b/day, as needed.

The Southwest points are starting to heavily congest into SP15, most likely because of the gas spreads. Here is a closer look at the last two days:

Am surprised any energy flows from Palo, whatever is clearing in the DA doesn’t cover the costs to generate. 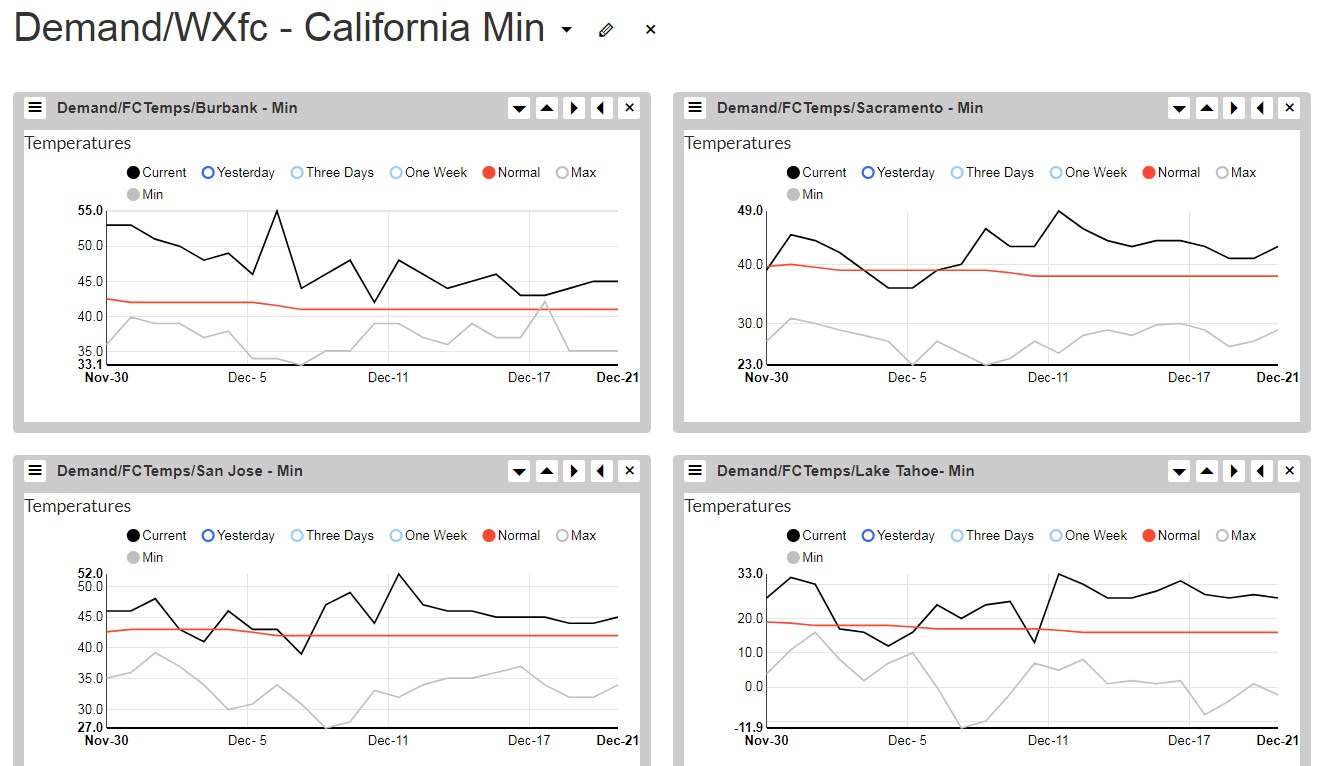 And, it doesn’t look like SCG will need to pull much gas, weather in the LA basin is mildly above average for the next 21 days, which takes one through most of the month. Of course, forecasts beyond 8-10 days are unreliable, but the bias is towards warm, which has been the trend for the last 90 days. 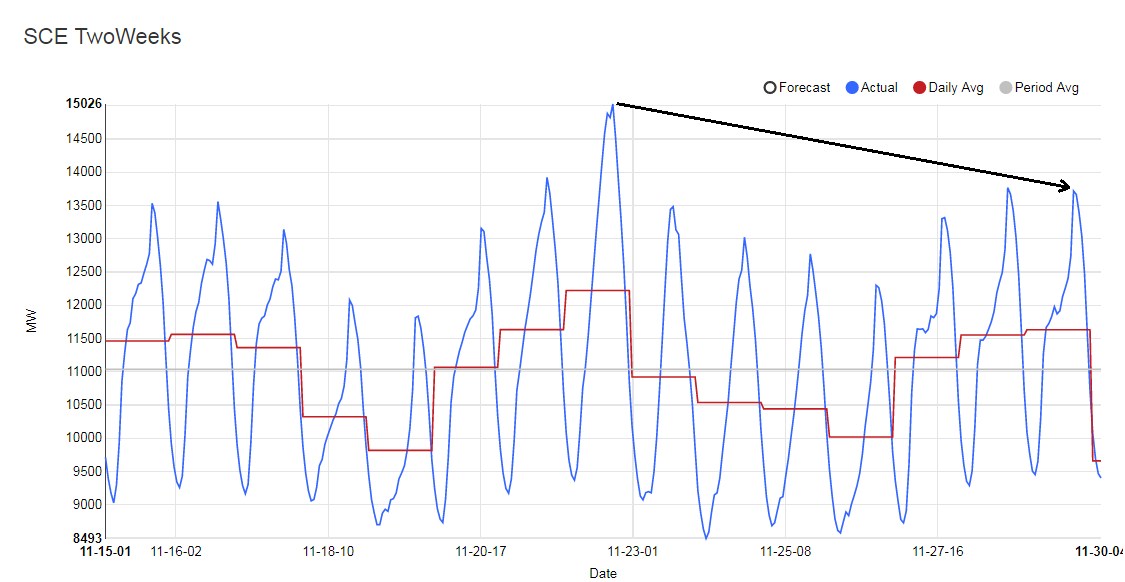 And Edison’s loads have drifted down from last week’s levels which were set by mid-90s in LA; they will drift further as temperatures continue to drop.

The WECC Interior is remarkably unremarkable; the outlook cools but doesn’t drop below average in this forecast. 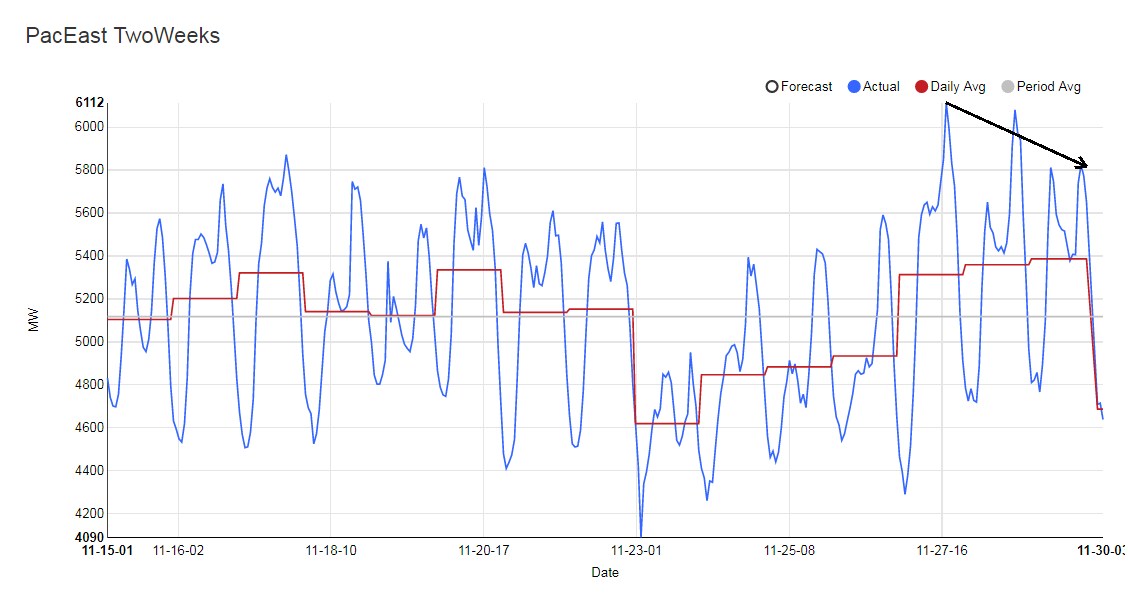 PacEast’s loads are up slightly from last week, but off from earlier this week. 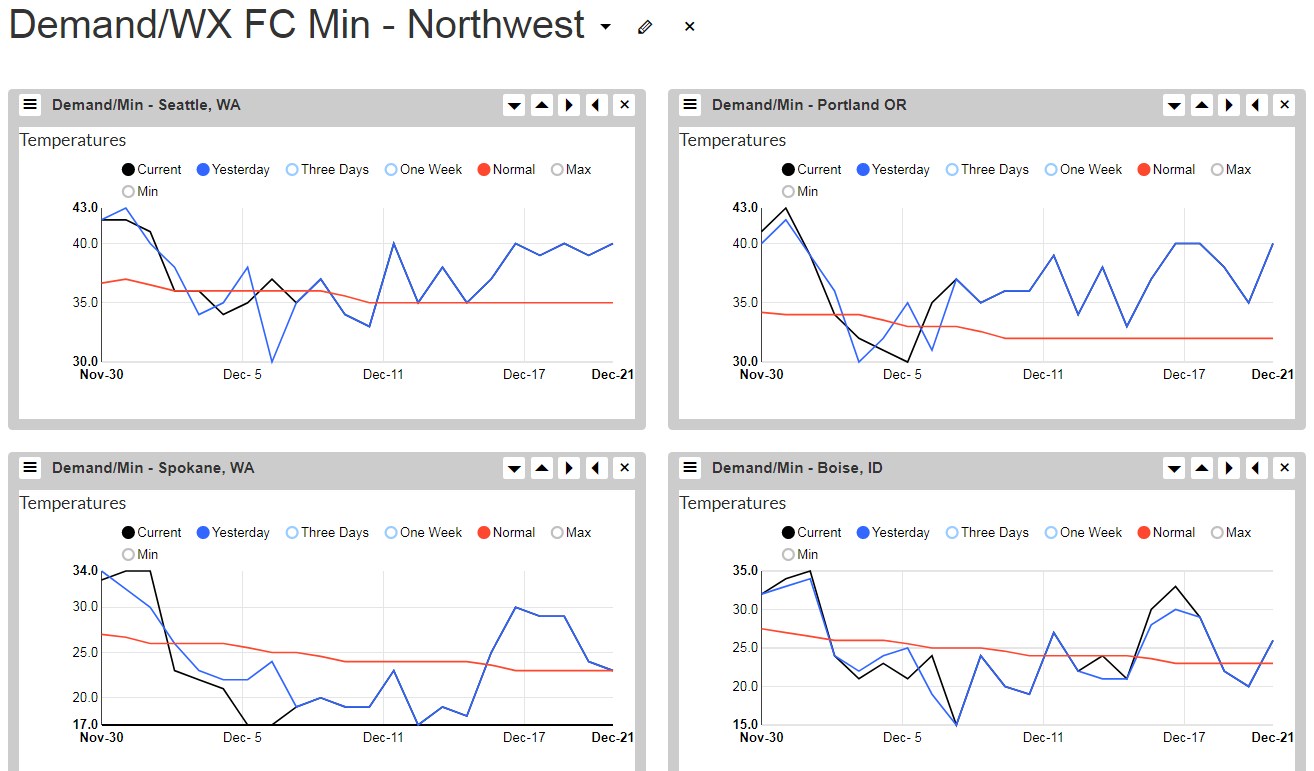 The Northwest outlook will get more bullish as the load-center west side cities fall from current levels, but neither station drops below normal. The Mid-C interior grows cold, below normal for several days, but there just isn’t enough population in the hinterland to set Mid-C price. 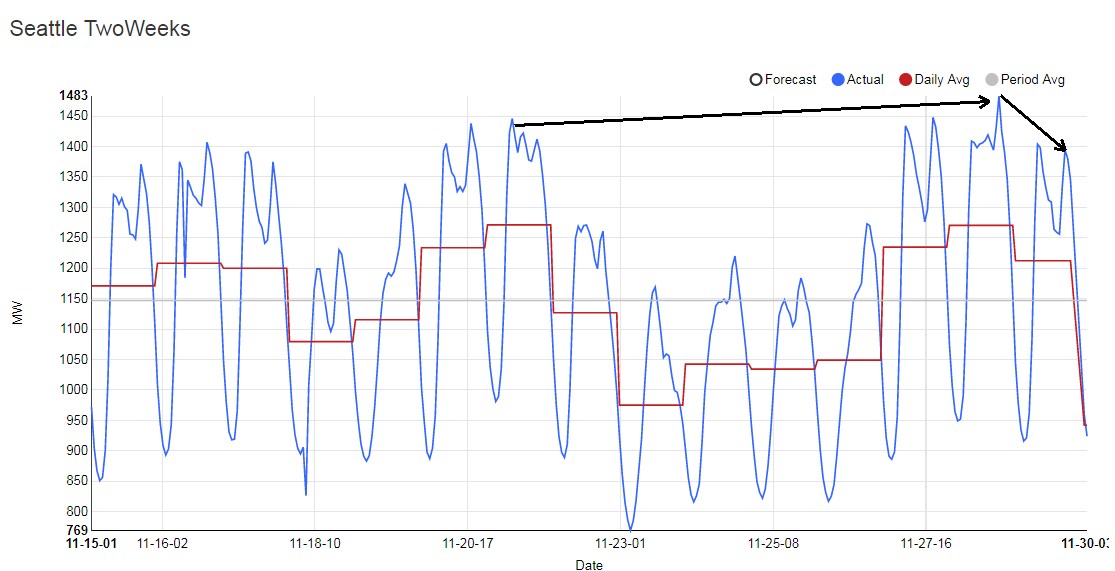 Seattle City Light’s loads rallied from last week, only because seven days ago it was quite warm, but fell yesterday from the Monday-Tuesday highs. 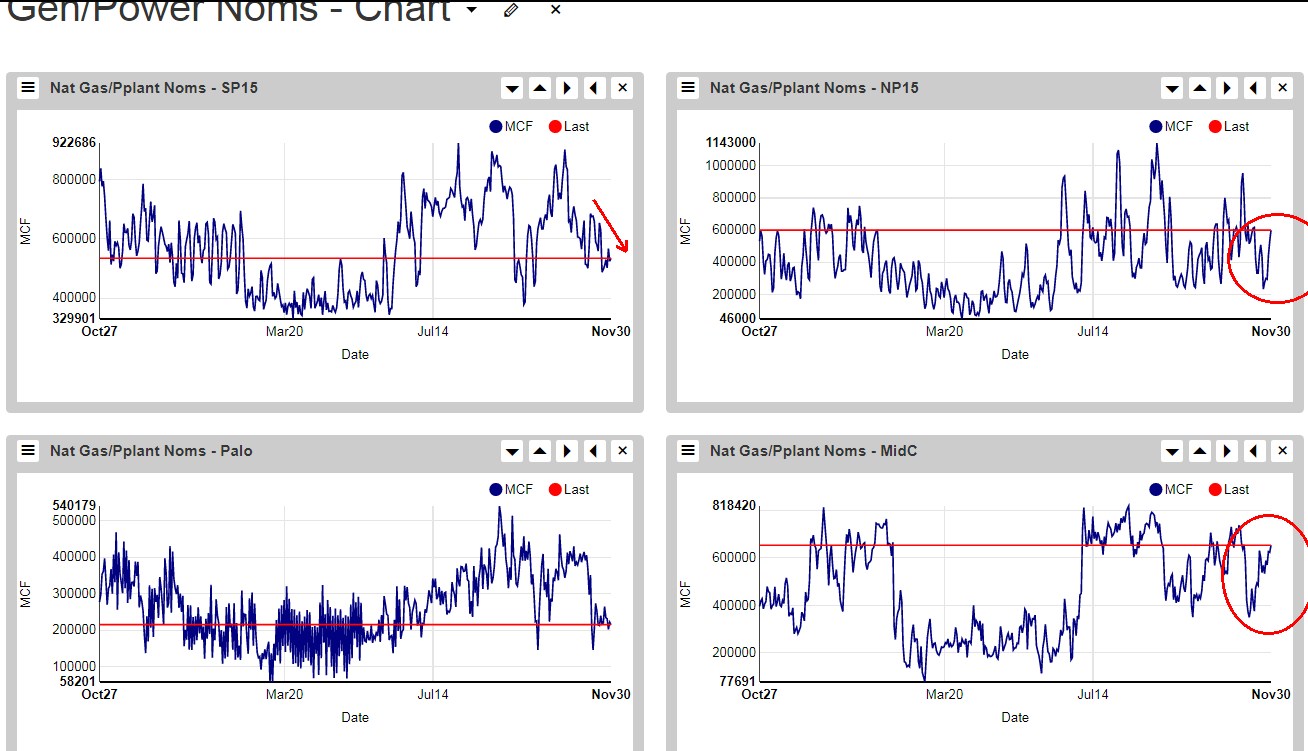 SP’s noms continue their freefall while we saw a healthy bump in both NP and MidC gas nominations. MidC rallied out of Thanksgiving; NP most likely off of serving SP load and avoiding the expensive gas costs inside the latter hub. 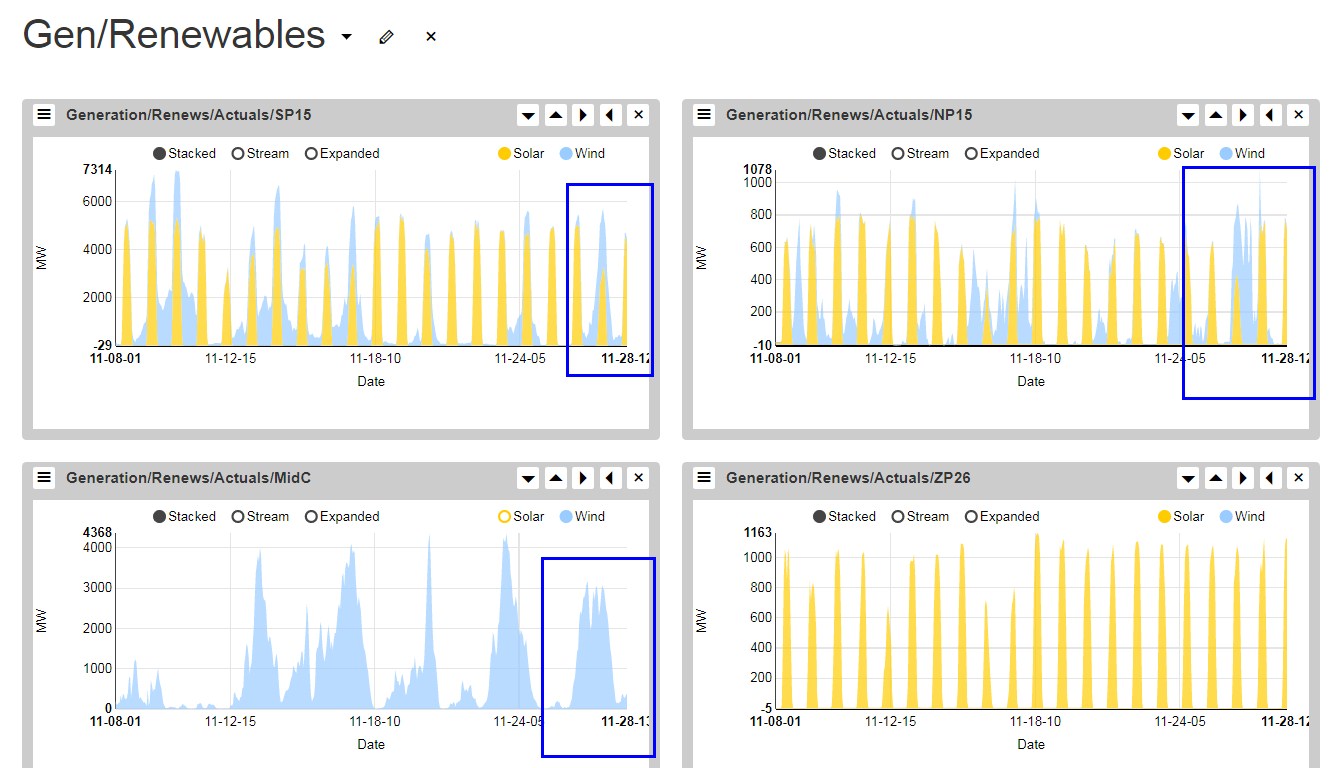 Yesterday was a big day for wind, nearly five gigs blew into the stacks, though most of the increased in wind was offset by cuts in solar at NP and SP. 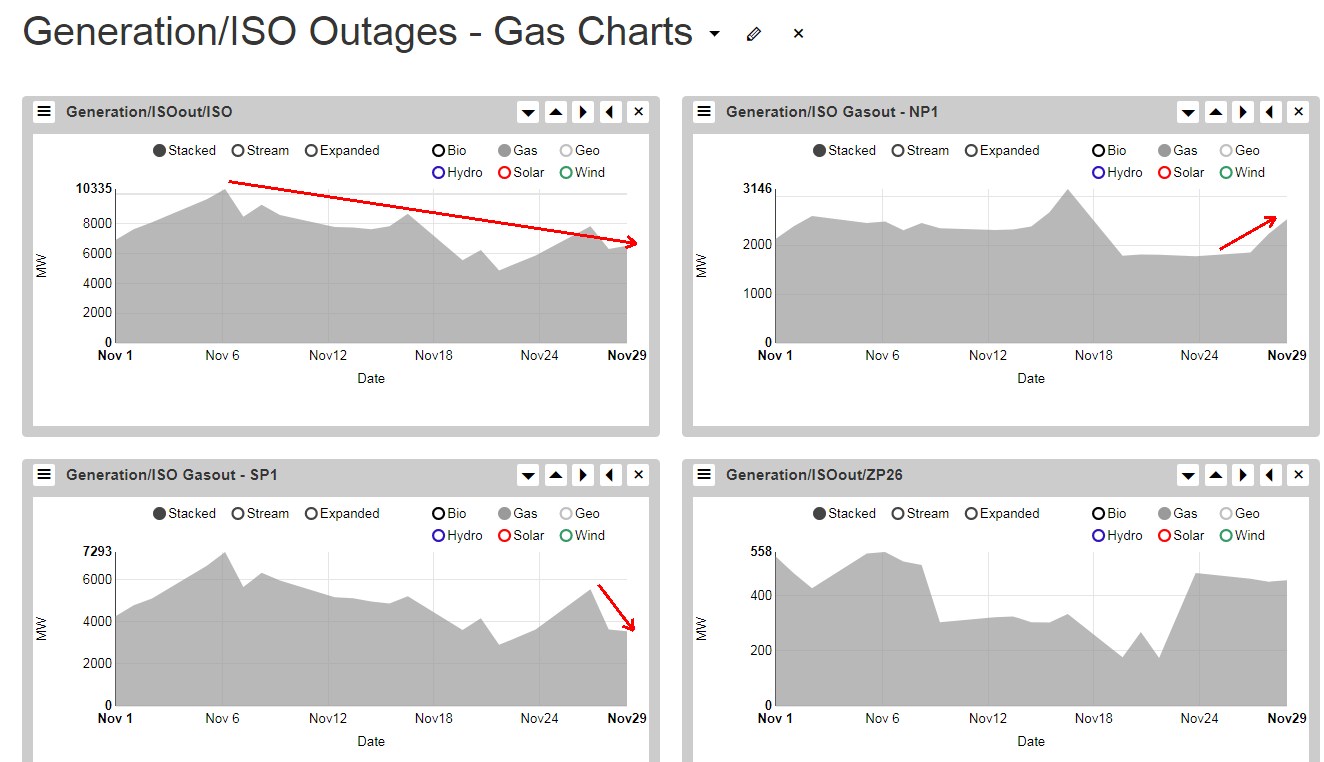 ISO gas outages continue to drop as units come back from their fall maintenance.

The Northwest will enter its first extended dry spell since the water year began; already snow anomalies have fallen below average: 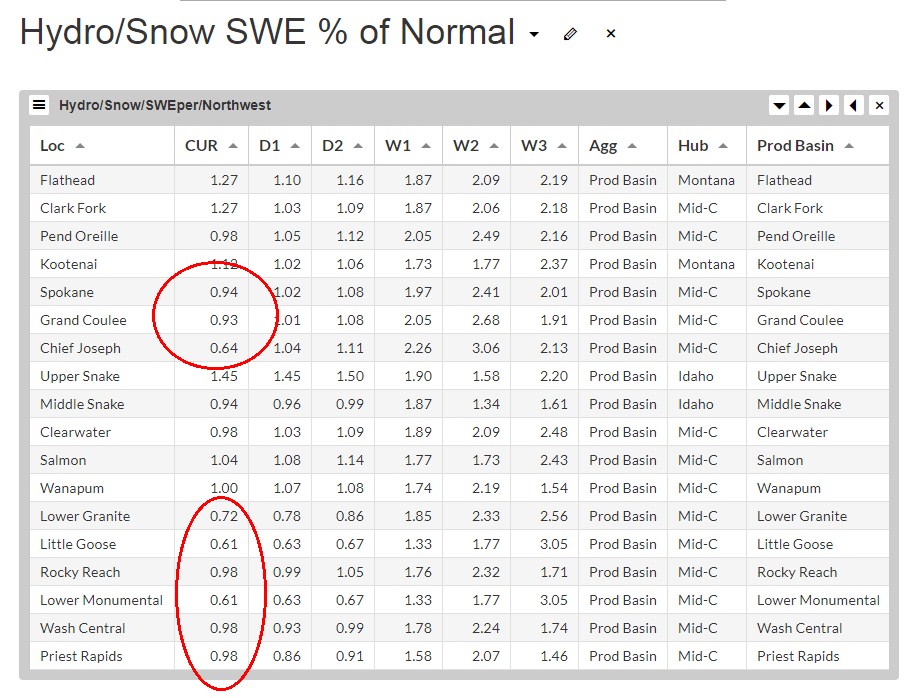 Or, if you prefer, a picture: 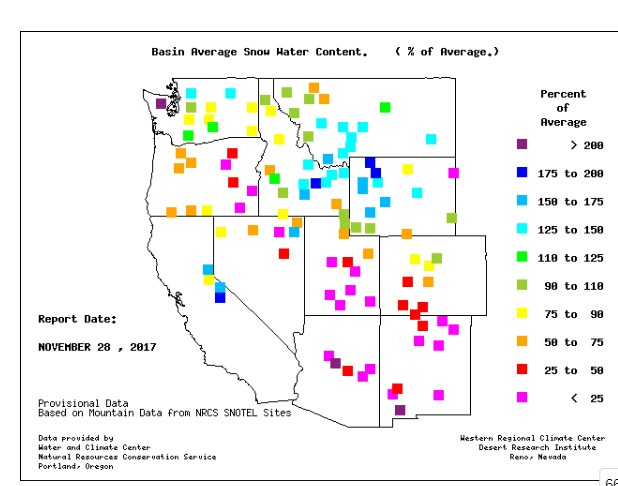 The market has pounded the Q2 off peaks at MidC, maybe too much?

BPA has added five feet to Coulee’s reservoir and is tweaking its other major storage projects in anticipation of winter. Overall, the Mid-C’s storage is at normal, but inflows will fall as the weather cools and dries out.

California sees a surge in its peak hydro output, adding a gig when it needs it. That shall pass, the state’s precipitation outlook is bone dry: 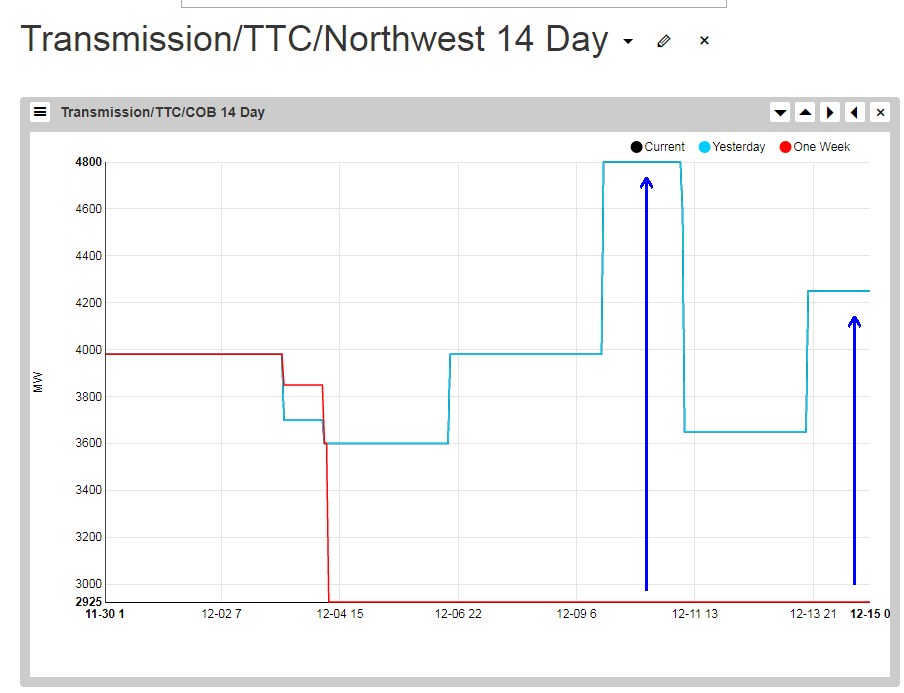 The derates BPA was projecting through mid-December have been reversed; now the line (AC) is projected to have 600-1500 MW more export capacity.

Both the DC and AC are at capacity most hours so the increase in TTC will be bullish for the MidC and bearish for NP.

Aside from the Socal  Gas issues, most fundamentals are more bearish than bullish. We do think the drying out at MidC is relevant and will be watching to see if that holds. With relatively cheap Q2s it might signal a buy. More on that in a later post.