Here are today’s highlights for the West. 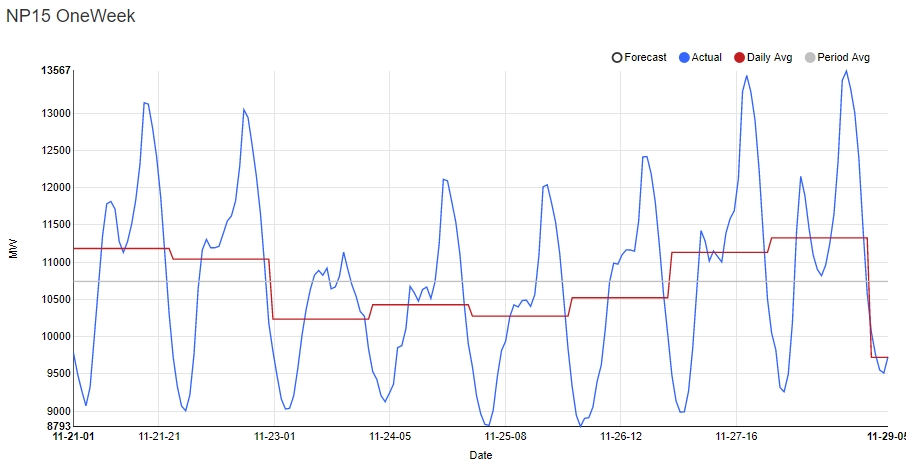 Yesterday marked the third-consecutive day of average daily load growth after finishing the day at 11,327 MW.  Demand peaked at 13,567 MW in the late afternoon hours, the highest hourly demand of the week, and more than 400 MW higher than one week prior. 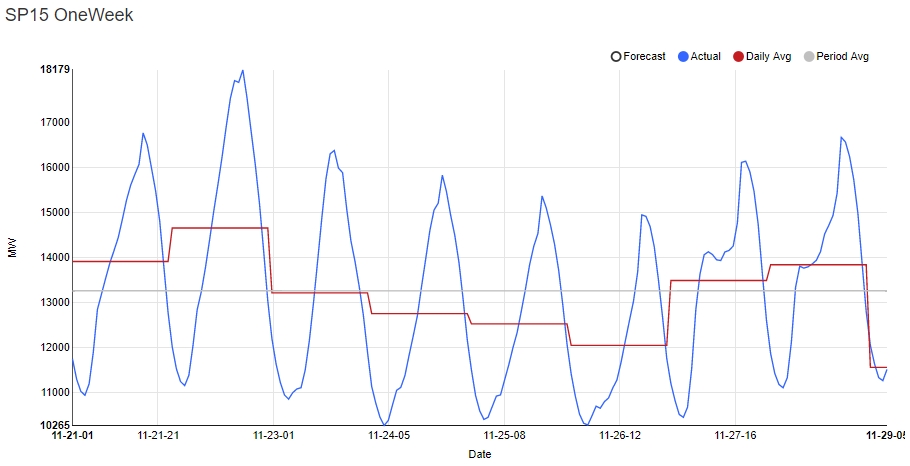 SP-15 showed its second-consecutive day of load growth with a day-on-day increase of 350 MW, largely thanks to peak demand increasing 540 MW day-on-day as well.  Despite the increase in peak demand, daily average fell 80 MW week-on-week. 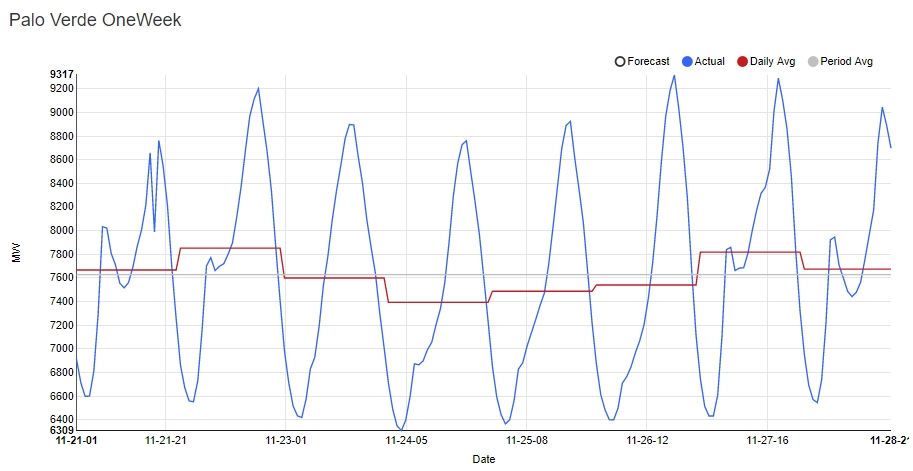 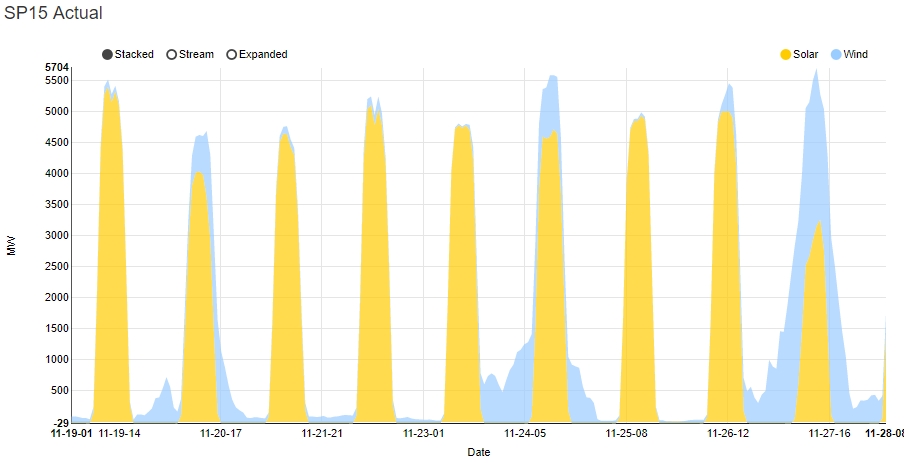 SP’s drop in solar on the 27th was more than made up by heavy increases in wind throughout all hours.  Renewable generation (solar and wind, anyway) peaked at 5,704 MW on Monday, the largest hour of the week.

Gas outages jumped nearly 3,000 MW over the holiday weekend before dropping 1,500 MW yesterday, still netting an increase of 1,400 MW since the 22nd.  Hydro has increased slightly as well, adding 600 MW since the 24th.

Portland shows up as the only station with below-normal daily aggregate temps, though the trend is moving cooler for much of the west, so expect more to join the list later in the week.  Denver marks the warmest anomaly with nearly +9 degrees, while most of California sits comfortably north of three degrees.

Denver showed one of the largest aggregated daily average deviation from the mean in the temp summary table, and while highs are above normal, much of the anomaly is driven by above-normal daily lows.  Lows will rise to their highest by the 2nd at 39, 19 degrees above normal.

Big changes to note for San Jose as the cool-down expected to begin on the 4th took a drastic turn warmer, increasing from 53 to 65 on the 6th.  The 8th also marked an increase of 8 degrees.

Until then, San Jose should get highs from 6 to 8 degrees above normal.

Sacramento also negated the cooldown shown yesterday as the 6th was bumped 12 degrees.  Daily highs are expected to stay north of average until at least the 9th and could climb as high as 65 by the 13th.

Burbank will come within a degree of setting a new 10-year high tomorrow as the temps are expected to reach 78, nine degrees above normal.  Tomorrow also marks the beginning of the end of the most recent warm up as highs should fall back to average thereafter, eventually settling within a couple degrees of 70 for the following week.

As many as five degrees were cut from San Diego’s forecast (compared to yesterday) over the next seven days, though highs remain mostly above normal.  Look for a peak of 71 to start off December before dropping back into the 60’s.

Phoenix’s should get several consecutive days of 10+ degree anomalies as daily highs shoot into the 80’s by the 1st, setting new 10-year records in the process.  Highs will fall back to normal by the 5th, but show potential for another warm up soon after.

No freezing temps in the forecast this week for Seattle as lows will stay in the 40’s through the weekend.  Next week shows a potential for cool weather however, as the 7th could drop as low as 30, six degrees below normal.

Spokane will get four more days of above-normal daily lows (reaching as high as 34 tomorrow, seven degrees above normal), before beginning what looks like sustained below-normal temps for much of December.  Lows should drop into the teens by the second week of the month.

Portland took a big cut to its minimum temps beginning on the 2nd as lows should drop below freezing, hitting a bottom of 30 by the 4th, 10 degrees lower than projected yesterday.

Mid-C’s sharp week-on-week increase ultimately amounts to a return to demand levels from earlier in the month. 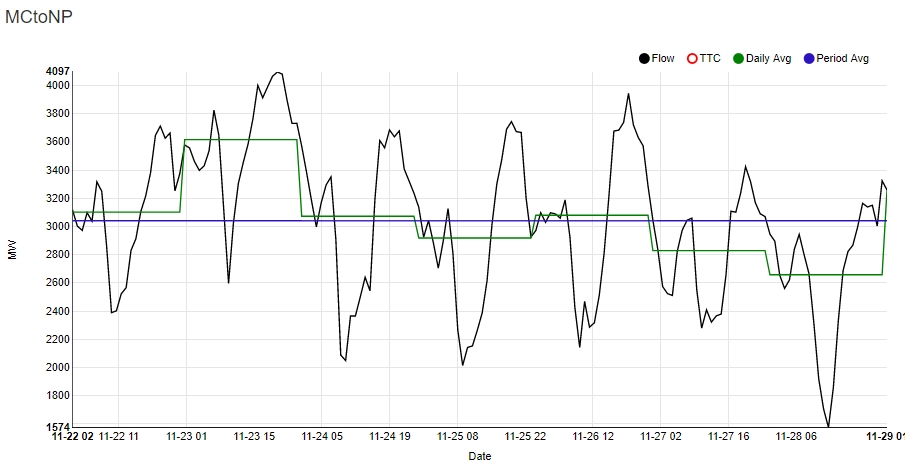 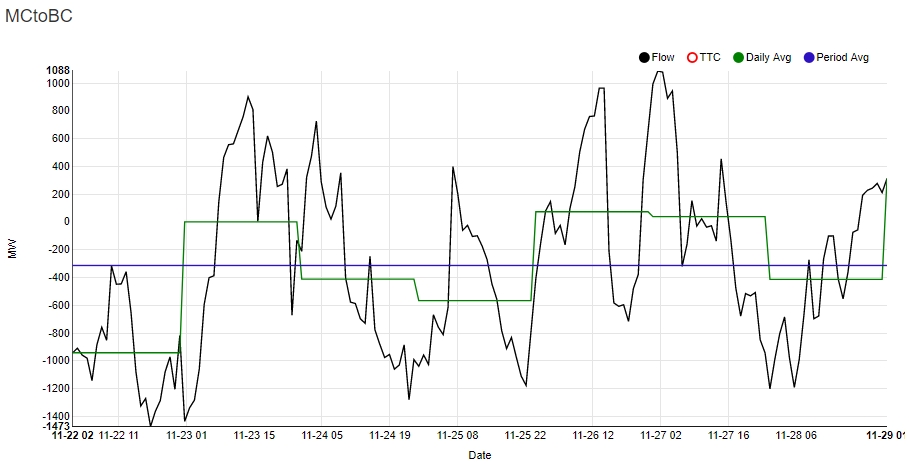 Average flow headed south yesterday after two-consecutive days of northerly flow, settling at -413 MW for the day.  The day started off with several -1,100 MW hours before making a steady climb through the afternoon hours, eventually reaching positive territory.  Despite the overall drop, flow is up more than 500 MW week-on-week.