It’s warmer than normal across the board as all but one station shows at least a 1.5-degree deviation from normal.  SP15 leads the way with all four stations recording 4+ degree anomalies.  Denver and Phoenix are among the highest individual stations.

Just four major anomalies in the precip forecast as Portland and Seattle are trending dry while NP-15 shows up wetter than normal as San Jose projects an inch above normal spread out over the next ten days. 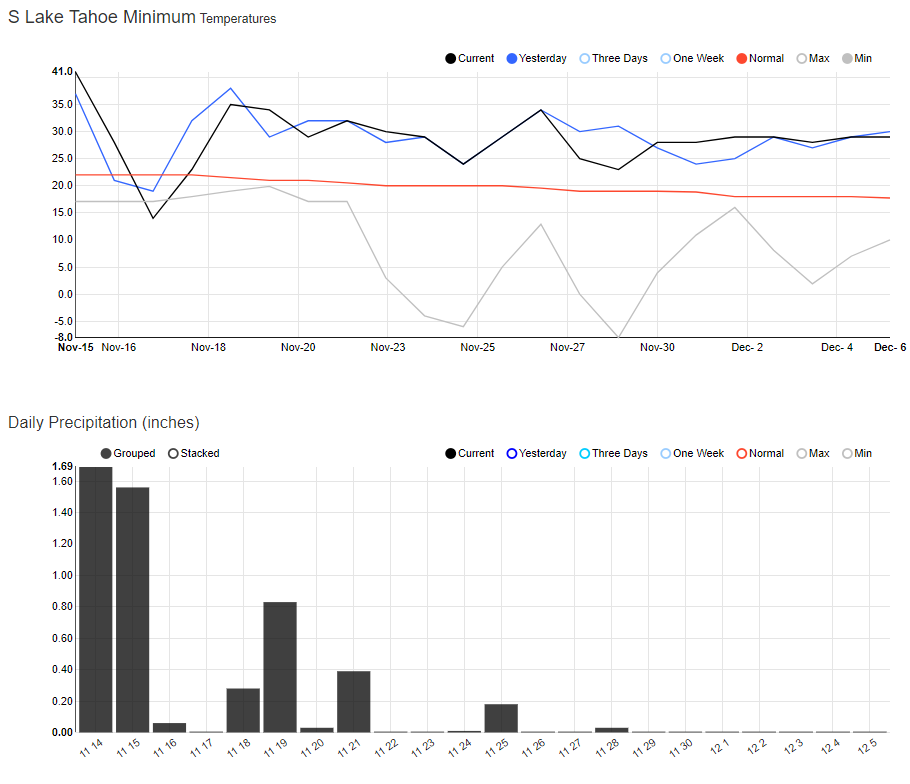 Some massive snow on the way for the Sierra Nevada as back-to-back days of cool temps and 1″+ of precip are expected over the next two days.  Lake-level elevations will warm up above normal thereafter, but may remain cool enough to hold on to much of the expected snow. 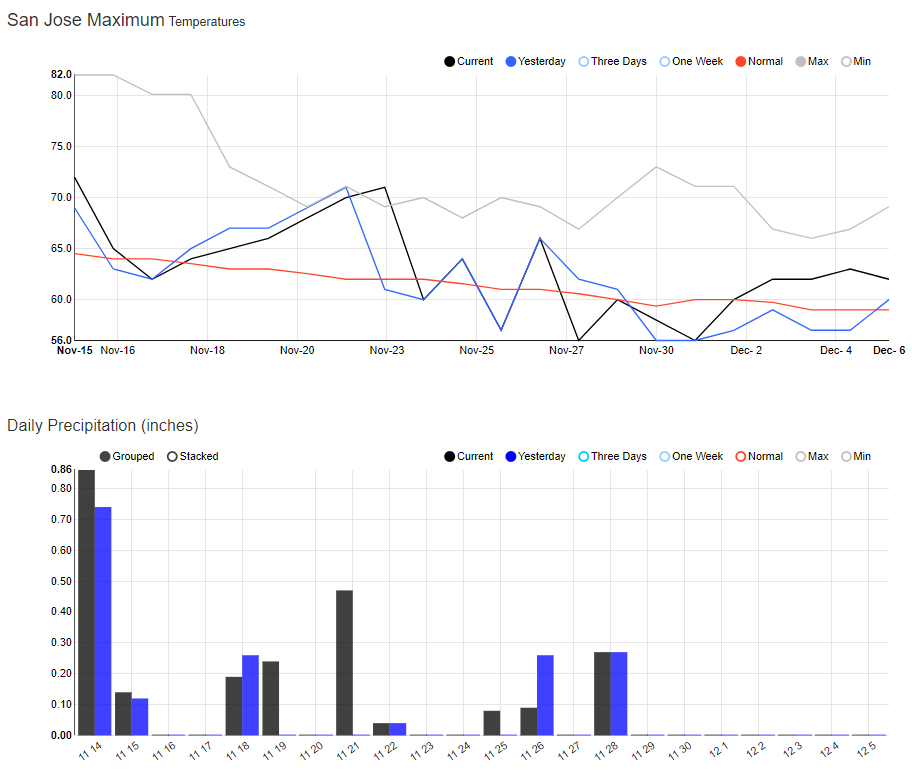 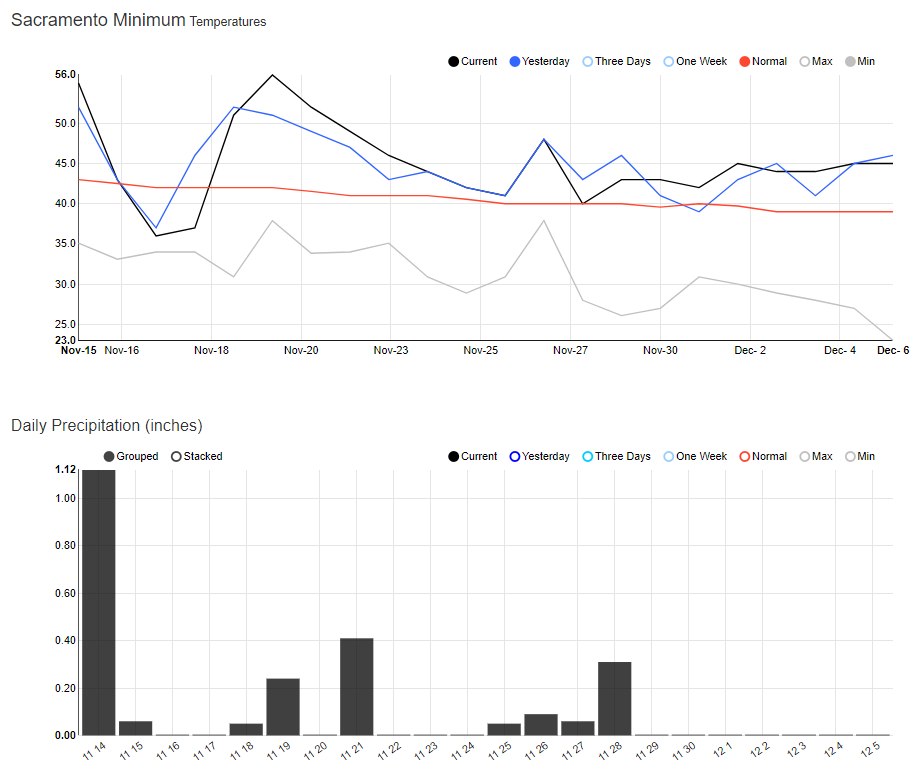 Sacramento will get even more precip as the forecast calls for 1.12″ today, and another 0.4″ projected for the 21st.  Lows will fall well into the 30’s by the end of the week, reaching five degrees below normal before taking a sharp turn on by the 20th at 16 degrees above normal.

There are new 10-year highs projected all over Phoenix’s forecast as November is pacing to be the warmest in a while.  Tomorrow marks a high of 86, 11 above normal, and temps won’t cool off much from there.  All forecasted days through Dec 4th are above normal.

Denver’s temperature anomaly is aided by the 16th’s projected high of 69, 14 degrees above normal.  All but one day are forecasted above normal for through the end of the month with most days 5-10 degrees above average for daily highs.

Salt Lake’s minimum daily lows will drop below normal just twice through the end of November, and will start off today at 18 degrees above normal at 49.  Just a handful of days are expected below freezing, and even those fall just one or two degrees below that point.

Seattle’s minimum temp forecast was bumped up several degrees over the next week, eventually leading to a daily low that reaches 47 degrees by the 19th, eight degrees above normal.  Things could take a cool turn after Thanksgiving as lows forecast into the low 30’s and drop below normal for the first time in over a week.

Portland’s lows climb even higher than Seattle’s as the 20th shows a low of just 49, 12 degrees above normal, and four degrees higher than forecasted yesterday.  Portland’s lows aren’t expected to dip as low as Seattle thereafter as just a handful of days fall below normal through the remainder of the forecast. 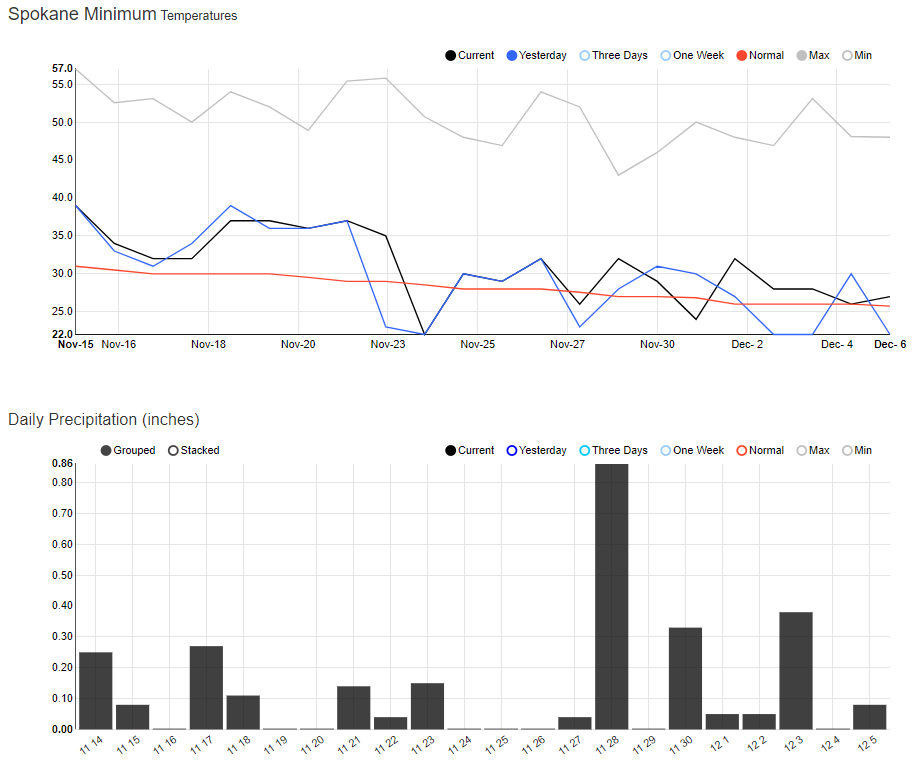 Spokane will also sit comfortably above normal for a week, though nothing high enough to do damage to snowpack in the higher elevations.  With a mediocre precipitation forecast on the way as well, don’t expect massive snow-level anomalies as well.

One degree shy of 80 today for Burbank, though temps should eventually reach that point as a warm up is expected for next week where the 23rd is projected at 84, 13 degrees above normal. 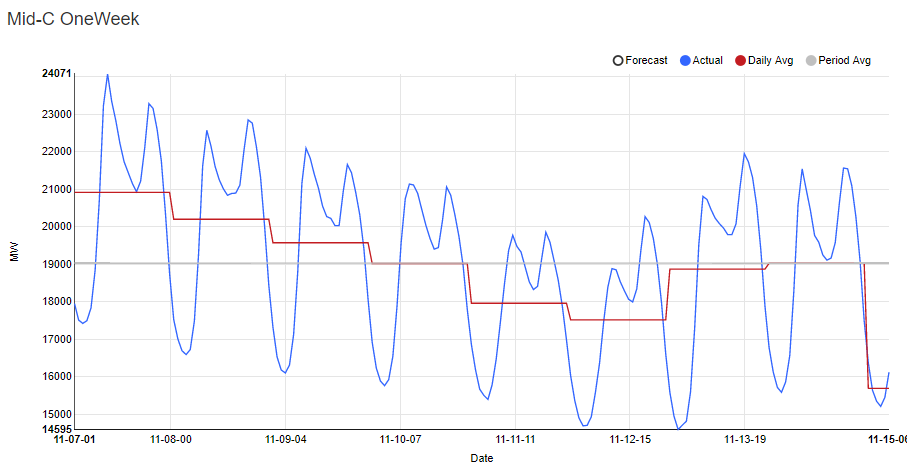 Demand peaked at 21,564 MW yesterday, down from Monday’s high of 21,949 MW, though the average daily demand finished up 150 MW largely thanks to a higher off-peak demand.  Average daily loads fell nearly 1,900 MW week-on-week. 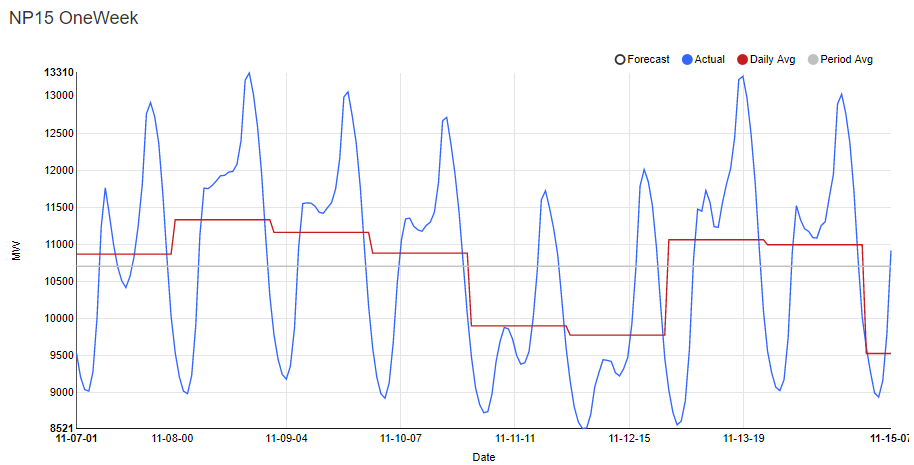 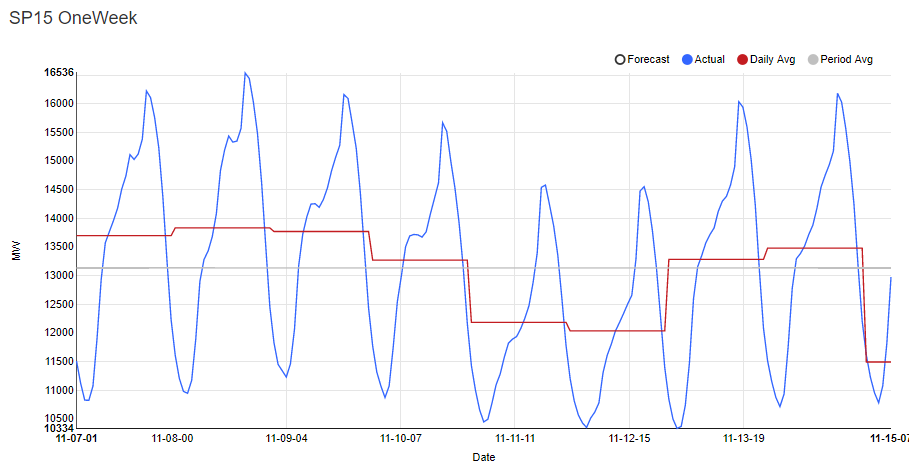 All nukes have remained 100% online since the 10th. 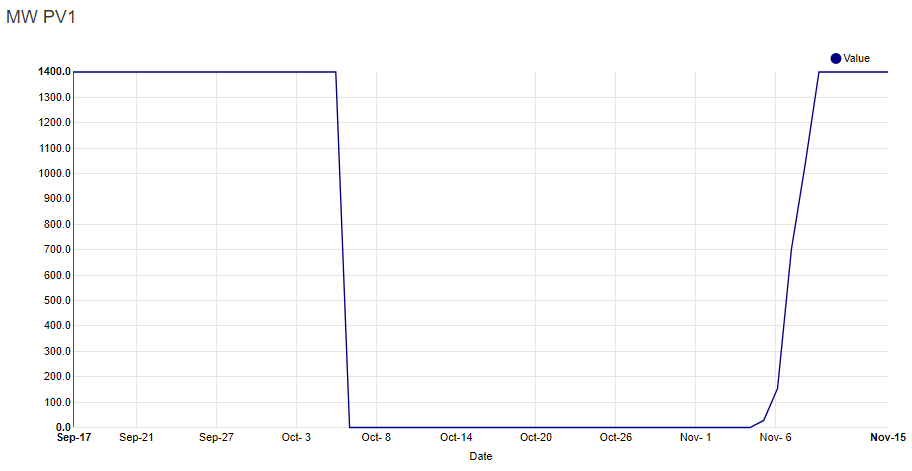 PV1’s refuel lasted from Oct 7th through the 10th of Nov, though began its return online on the 6th.

Today’s 10-Day forecast projects below yesterday’s for the entirety of the forecast, though it remains well above projections from 2+ days ago.  Look for steady increases beginning on the 19th. 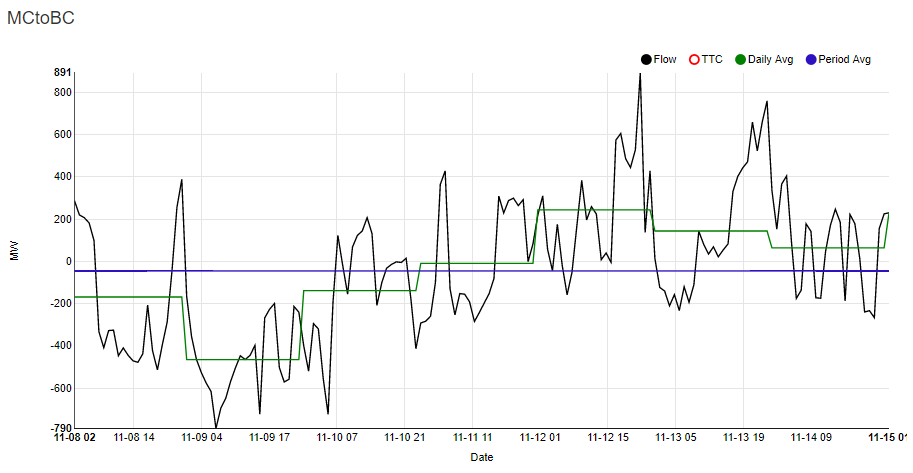 Yesterday marked the third-consecutive day of northerly-flow in terms of daily averages as the day finished at 64 MW.  While average flow was down 80 MW day-on-day, it remained up week-on-week by 220 MW.