A few minor developments worth exploring, before going to our APT Backend review. Let’s start with cash:

This is a new view of cash; we’ve combined on and off into the same table and combined gas price and heat rate (HL only).  A few observations:

The DA markets are off, week-on-week, and the spreads to the outside hubs remain wide. Note Monday’s congestion at PV. 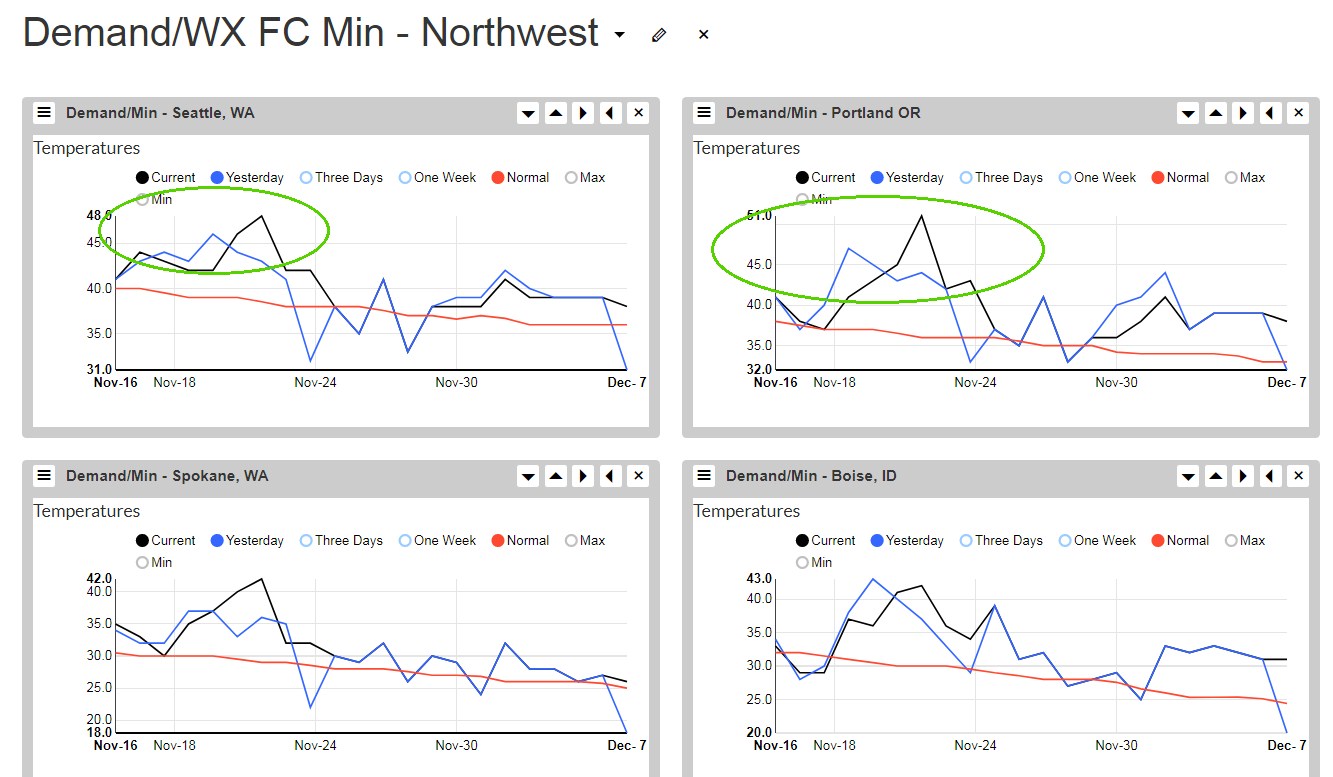 The forecast has turned bearish; instead of the cold building and extending; it has disappeared. Now, both Portland and Seattle are at or above average for the foreseeable future. 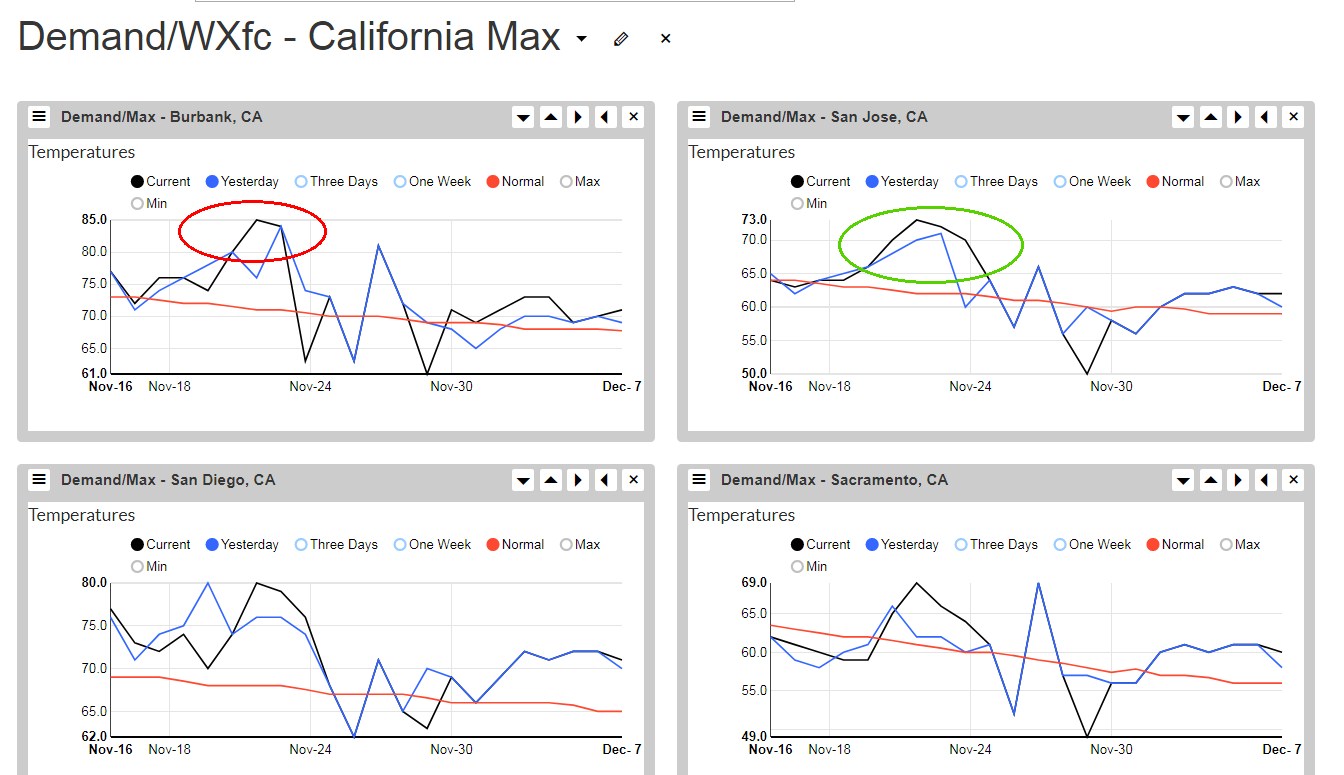 While the Northwest grows bearish, LA gets warm, even hot for this time of the year. Burbank is poised to post mid-80s next week, but note the heat is limited to the south; Sacramento clings to normals. 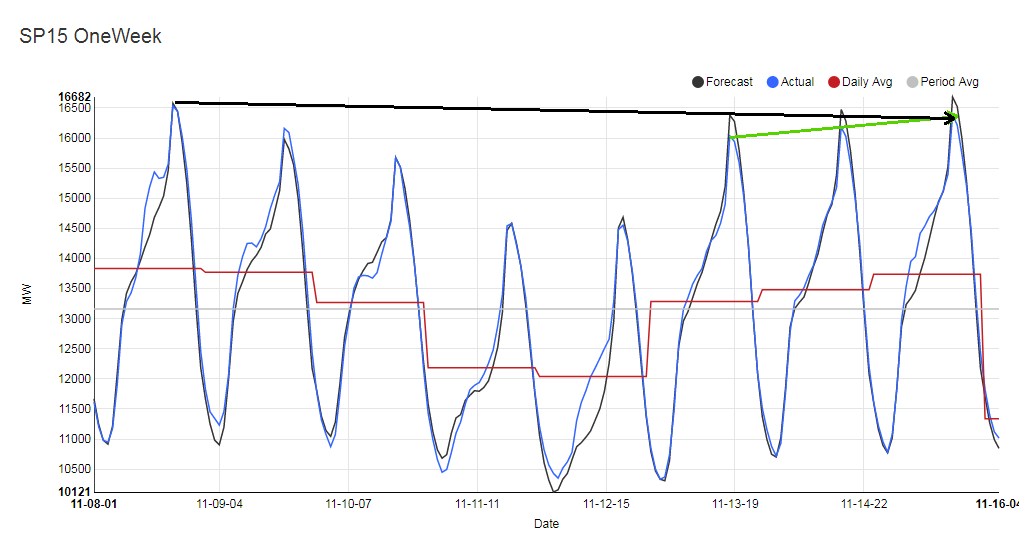 Yesterday’s peak SP15 loads are off from last week, but up from Monday. 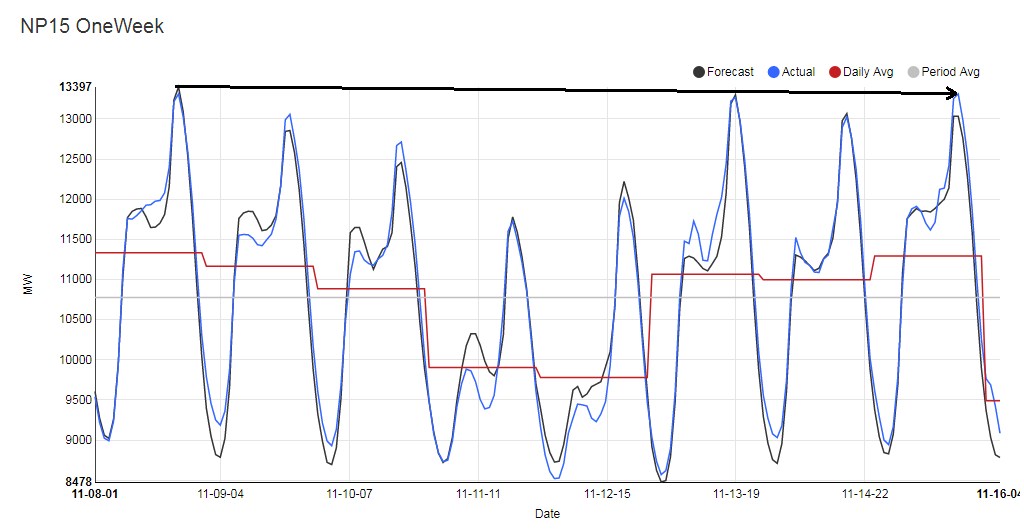 NP’s loads are also off from last week but unchanged from Monday; the northern hub has no AC load, the only thing that will make that hub’s loads rally is cold weather and there is none coming. 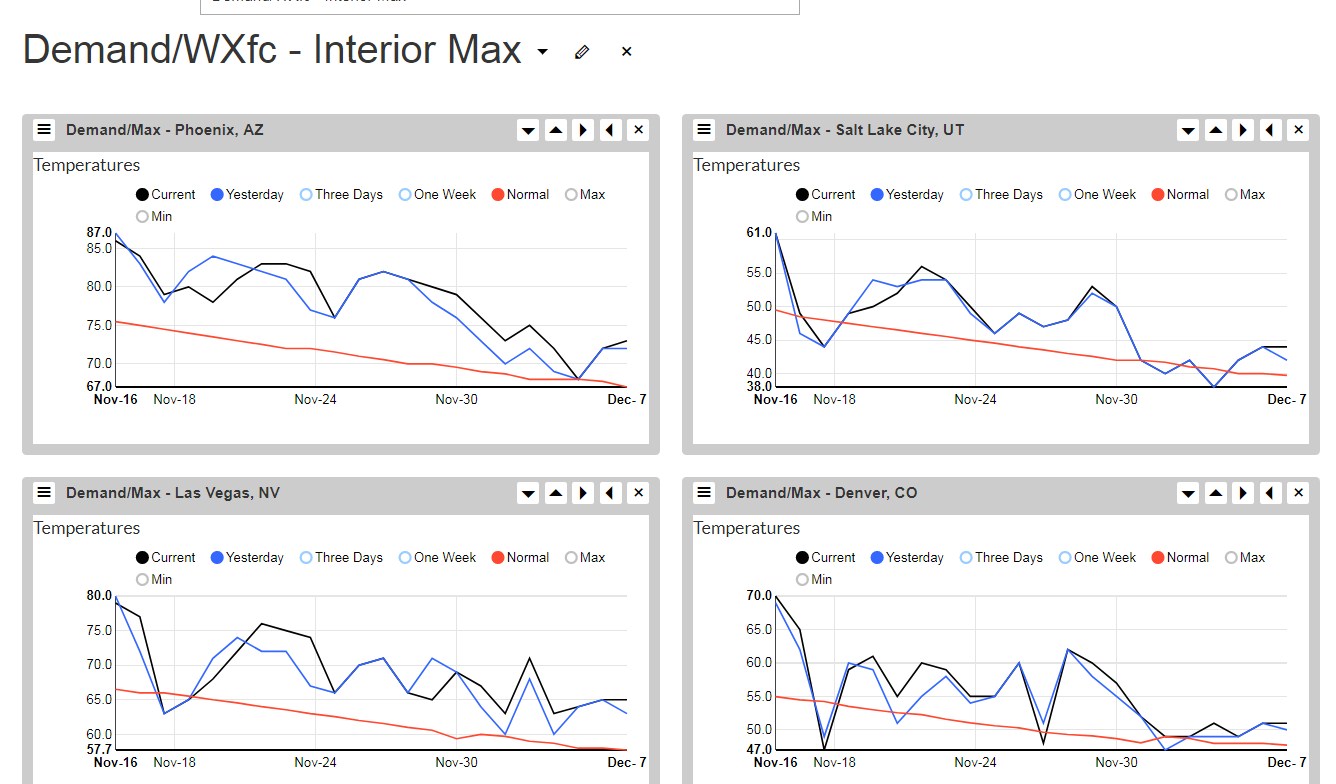 Phoenix’s string of above-normal continues, but the daily highs are a downward sloping line; soon, if not already, above normal is bearish. 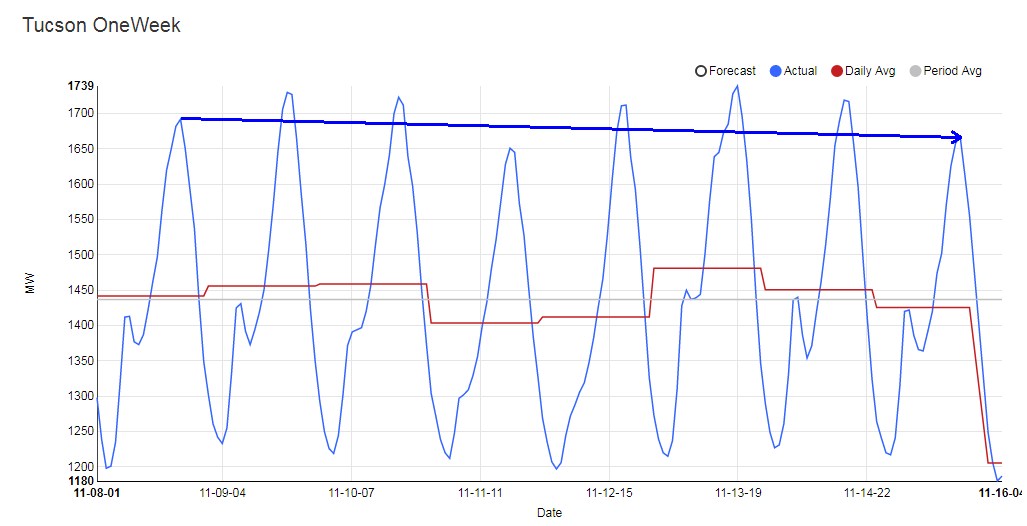 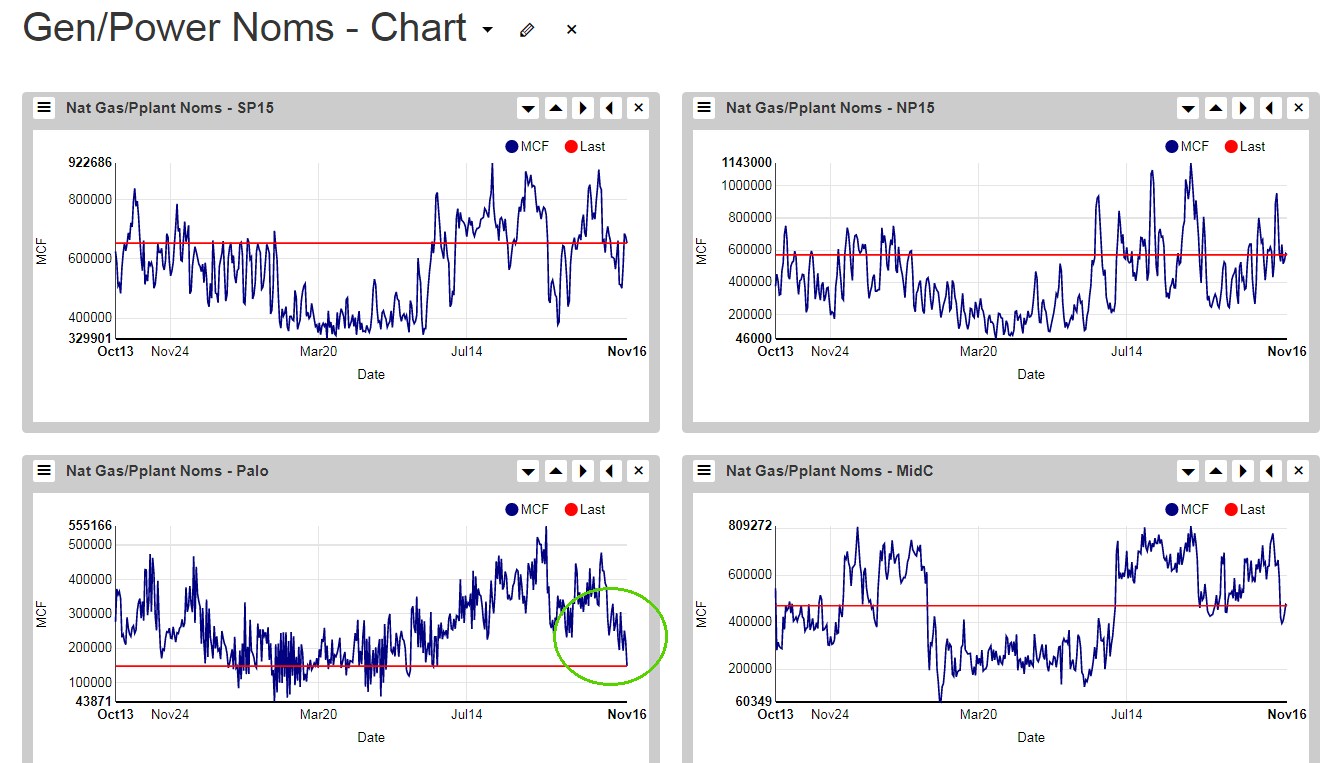 The nom plots are interesting; Palo continues to see less and less gas online; same is true for NP and Mid-C. Not so for SP15, there the hub called upon more gas and next week we’d expect more coming online. 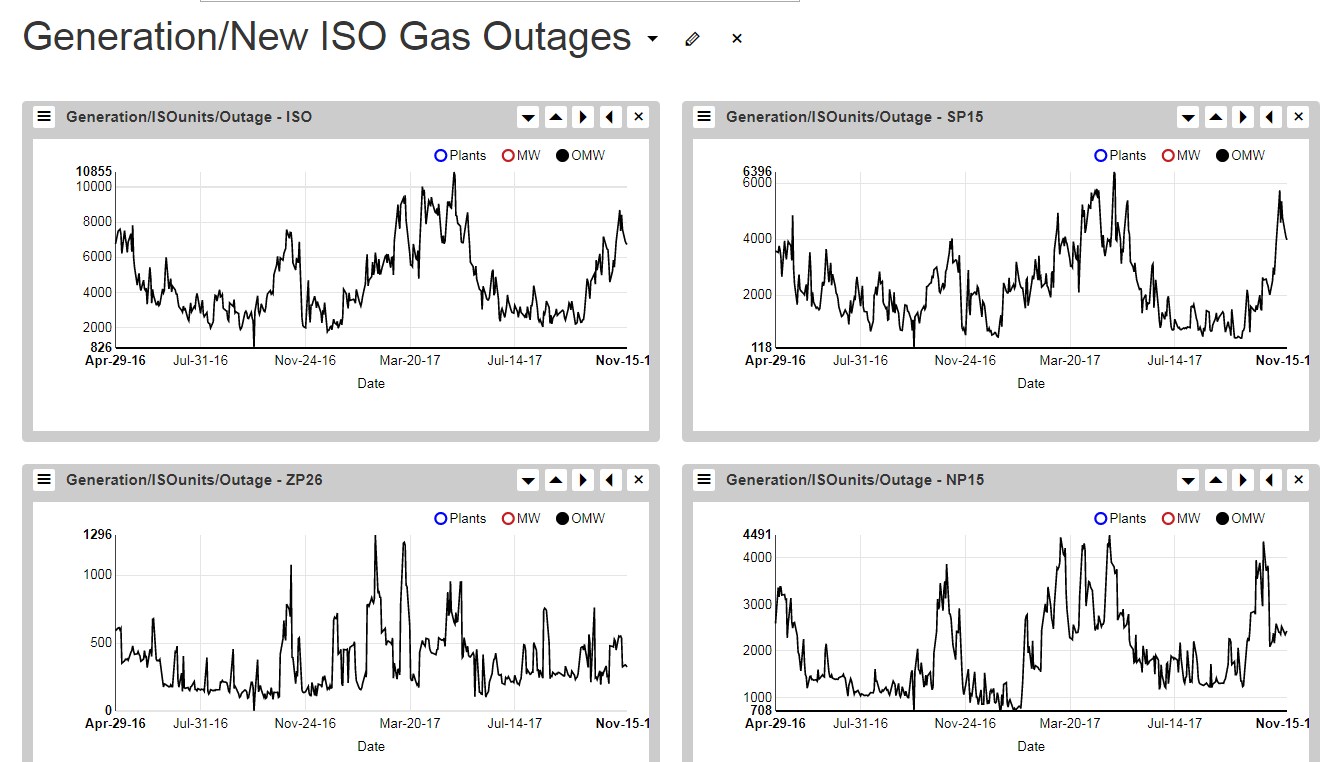 The Autumn gas outage season has seen its peak; all hubs are coming off as the state braces itself for Winter. 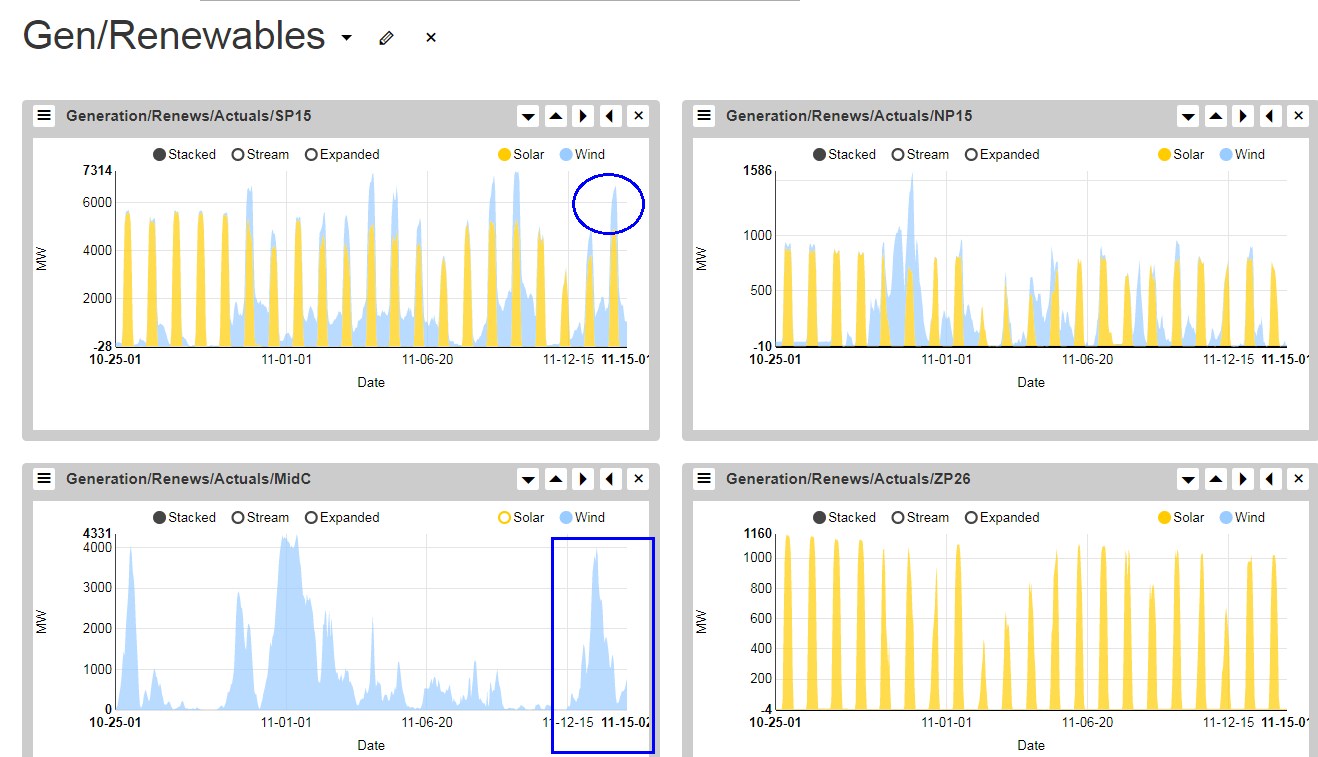 The Northwest realized a surge in wind, so did SP15, but NP had none.

California will see its first very big storm land today and will remain wet through the weekend. Some of the rivers are already responding:

Check out the Yuba and Cherry Creek. While those surged, the regulated flows out of Shasta continue to be scaled back, and the Pit runs baseload.

The California death spiral out of the very big WY17 has ended; both the on and off-peak energy rallied this week.

The Northwest has a relatively wet outlook for the foreseeable future, though the ten-day cumulations are lower today than last week — that is because the storm has passed and left a “mountain” of snow its wake: 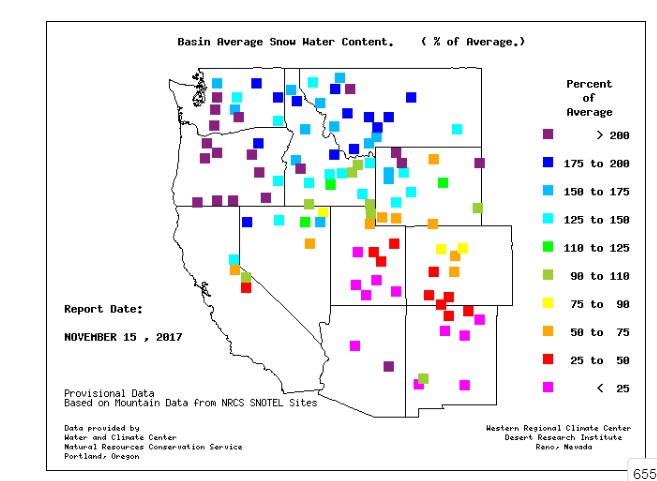 If only those anomalies would hold; if the date on that plot were April 15, we’d be looking at a significant water year. But it is just Nov 15, and a few inches can violently swing the coloring of this map. We’ve said it before, and we’ll repeat it, it is way too early to make a significant play on WY18. That said, anomalies and relevancy are creepers; where they don’t matter one day, they all of a sudden are relevant. Today, you’d have to carry a bearish Q2 sentiment, but that would be like short 25 MWs, not a kilowatt more.

The above is this week’s STP and warrants an observation, or two. We mentioned last week that we thought the transition from Dec to Jan was stupid and this week the RFC agreed and backed that way down. We don’t understand the March days; these appear way too low given that we have positive SWE anomalies and above average precip coming. Finally, the year on year plot looks very reasonable with its upward sloping line.  Those values will change many times over the next three months, but for now, they appear sound. 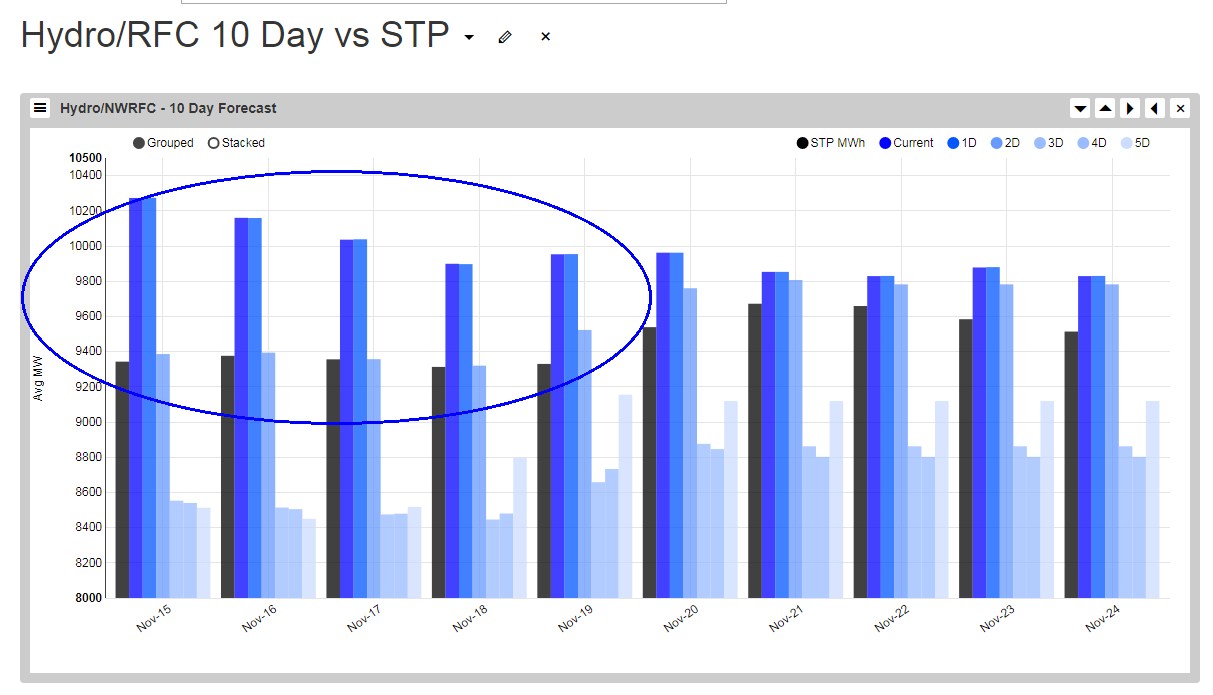 The RFC has jacked more water into its 10 Day forecast; almost a nuke’s worth for this weekend and early next week. Coupled with warmer weather, this is a bearish outlook.

California saw a sharp rally in its Snow Water Equivalent anomalies, and the big storm hits today. The Northwest is above normal everywhere but the absolute inches are tiny, so it doesn’t take much to create an anomaly.

Both the ISO and BPA have picked up some new AC maintenance:

The DC is poised to return to action this weekend which is quite bullish given the crazy high heat rates the MidC is already realizing.

It was interesting that the Canadians didn’t sell more into that market, perhaps they are waiting for the DC to come back. Look at how tightly flows on the AC followed TTC; the line is full, congestion is the MidC’s reality, but we don’t see significant price separation from the ISO.

The MidC has grown more bearish while SP could get very interesting next week; Palo and NP are just in death spirals.