To recap our fundy outlook …

This was easy; we just took the top five trades; all of them had substantial WoWs, and there were a lot more we could have published. 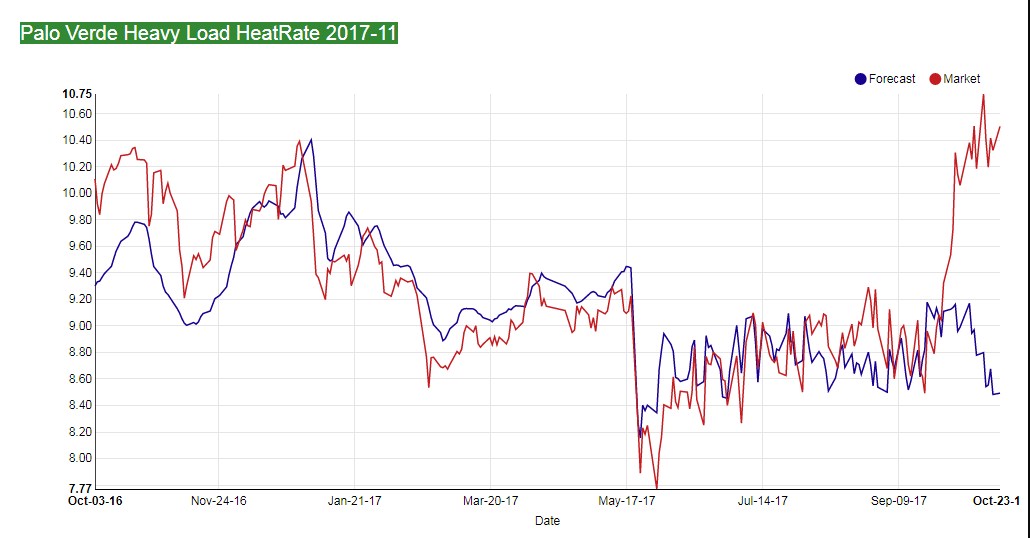 This, the Nov PV HL, has been reported before but it still warrants a short position. Most of PV’s cash strength can be explained by the ISO’s strength; take away that, the ISO bullishness, and PV is left with just normals. We liked it last week and like it, even more, this week. The Nuke will return about mid-month and WECC loads will be off 20,000 MWs by then. 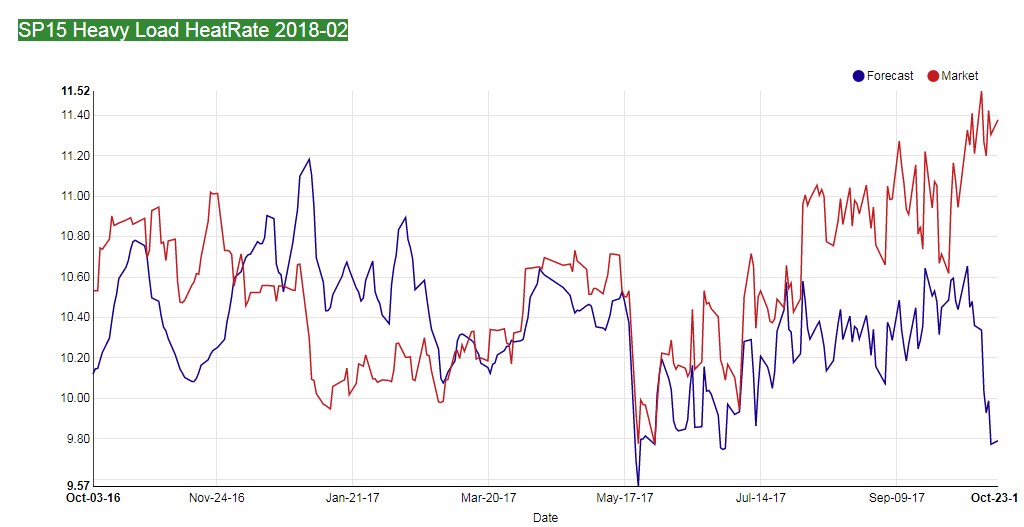 Way out in the curve, February, but that makes it even better to short because none of us have a clue about the value that far out. The only thing we know is that it won’t be 102 degrees in LA on February 9th. 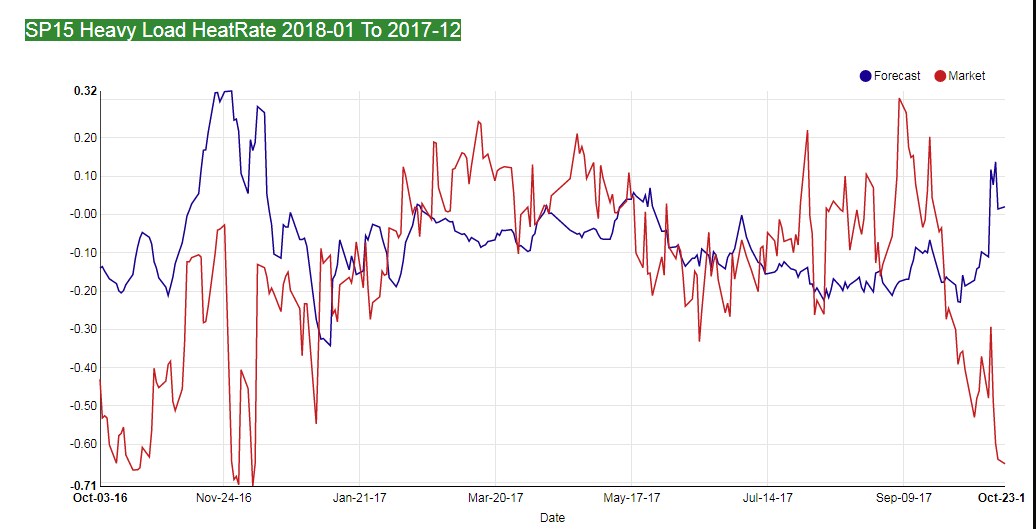 This is strange; the Jan-Dec roll has dived. Not sure if this is just wrong marks, or the market has decided to love Dec because October 21 is 102 in LA? Plus it is a new trade; we’d fade this all day long. 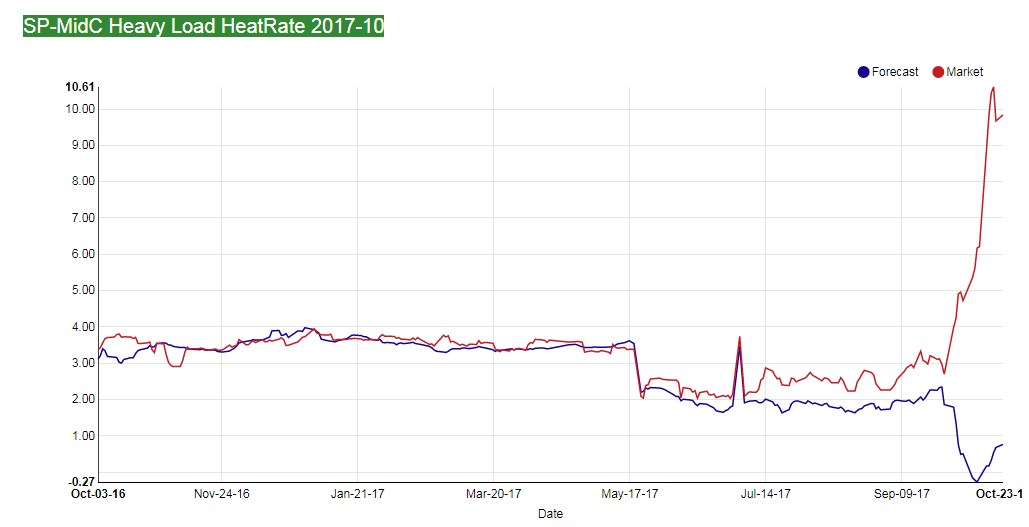 As expected, the BOM spread has blown a top. We wouldn’t fade this today, nor tomorrow, but sometime this week you’ll have to short it. Especially given those low 30s in Portland/Seattle, but those come in Nov. Still, the market will look forward, but for now, it only sees LA roasting. 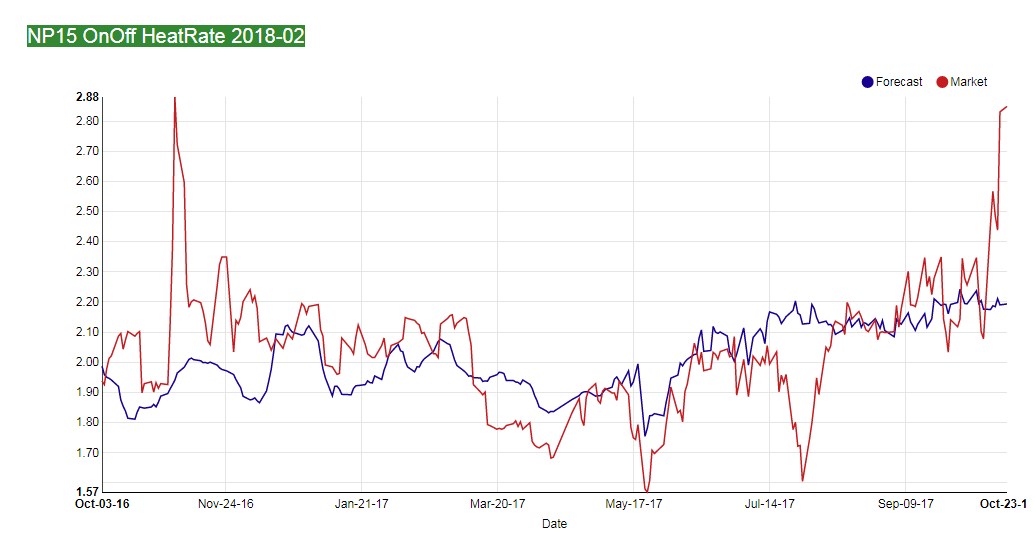 Interesting, all of a sudden the market loves NP February. Why? No substantial reason, except for the Cal heat this week – fade it.

In this view, we sort on WoW descending which puts the most significant moves in rank at the top (week on week change). 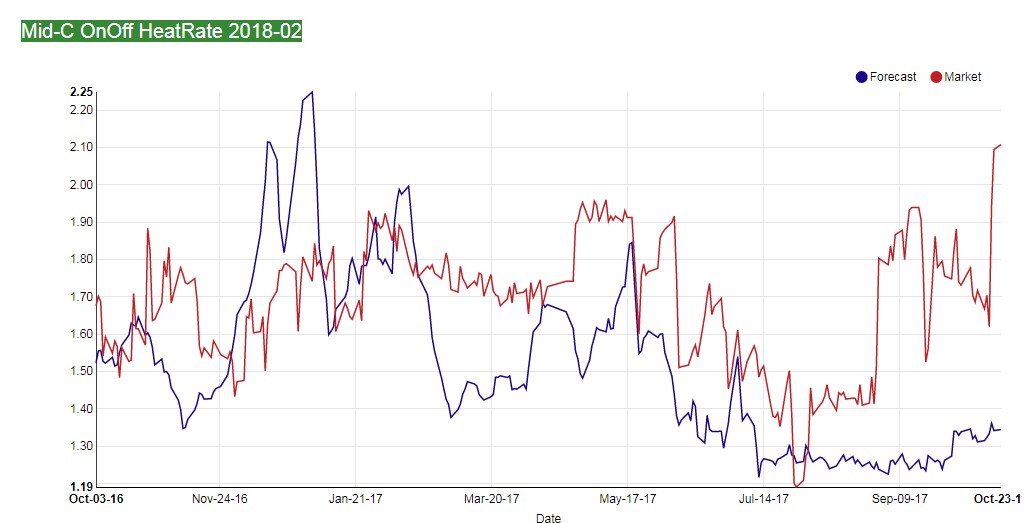 Crap! Someone loves Feb, a whole bunch, not sure why or what they know today they didn’t see a week ago. Probably rallied in sympathy with cash which means it likely should be shorted. 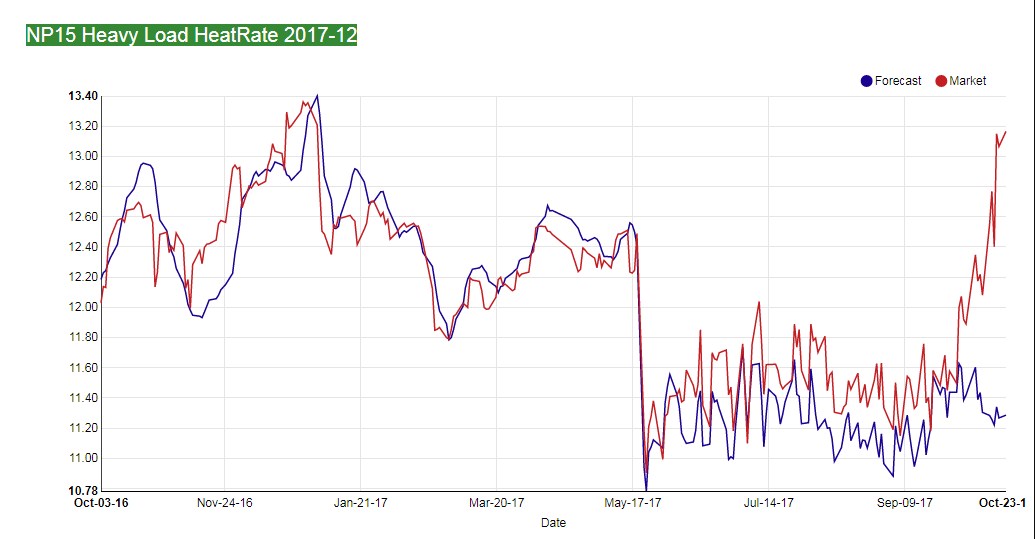 Same story, same stupidity. This strip, however, hasn’t stopped rallying and probably has more juice off of this week’s cash. At some point, it becomes a juicy short. We prefer waiting for a confirmed top, and recent history confirms that chasing tops can be detrimental to your mental well being, and your book:

Though the model has been right 70% of the time shorting at a Contract High, the net PnL is negative suggesting a couple of blow-out losses were realized executing said strategy. Contrast that with the “Strong-Near High” strategy which has a lower win/loss % but a positive MTM. 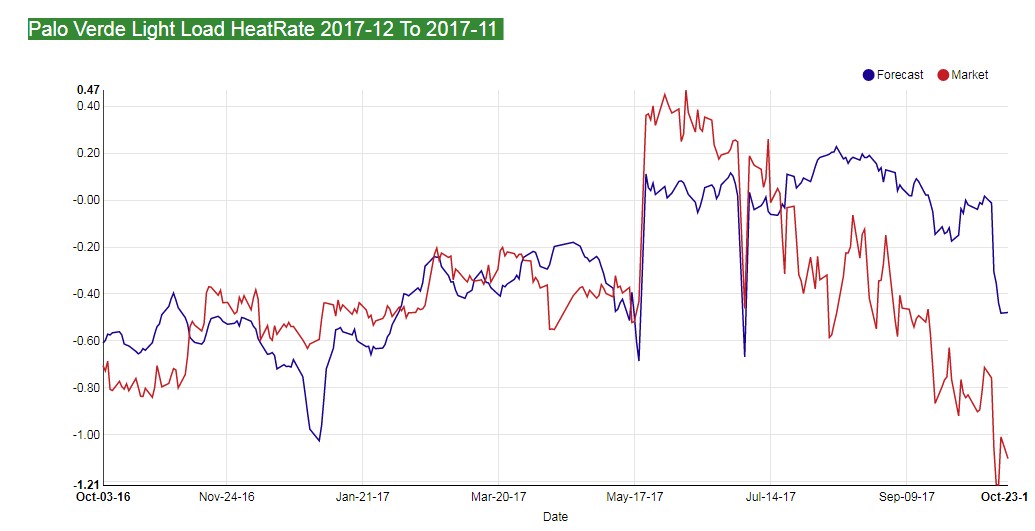 Are you looking to buy something cheap? Look no further; the market is literally paying you to buy the Dec-Nov Palo roll. All of this bearishness is October cash (and that is all ISO) driven, so why Nov?  I guess the market thinks the heat linkers, too bad the NWS doesn’t agree. We’d buy this and laugh. 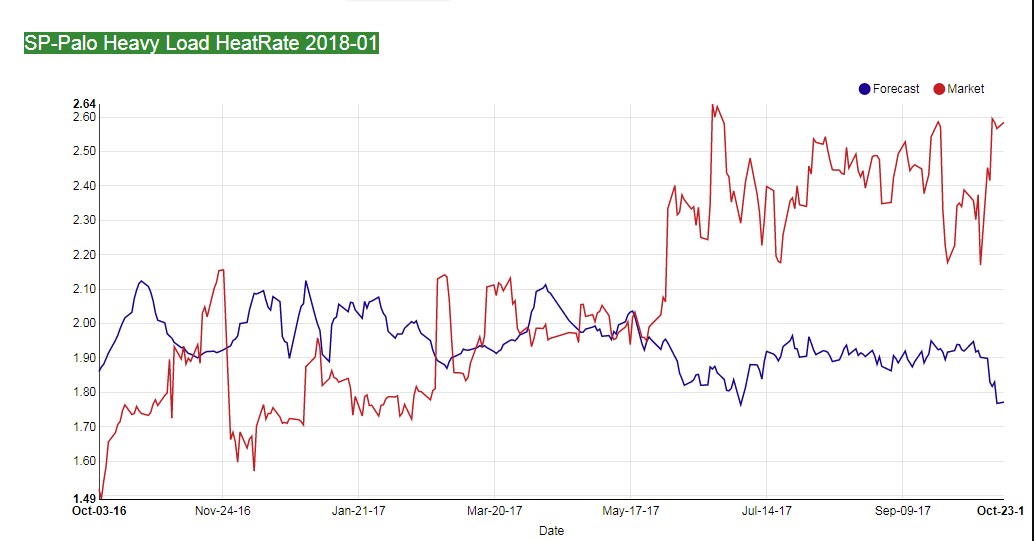 We talked about this very scenario last week; this was one of the Falling WoWs. It seems a paradigm shift took place last spring, now it has a new reality and is poised for a new short.

These are like prom dates from a distant past; at the time, you were head over heels in love; today you can’t even remember her name. 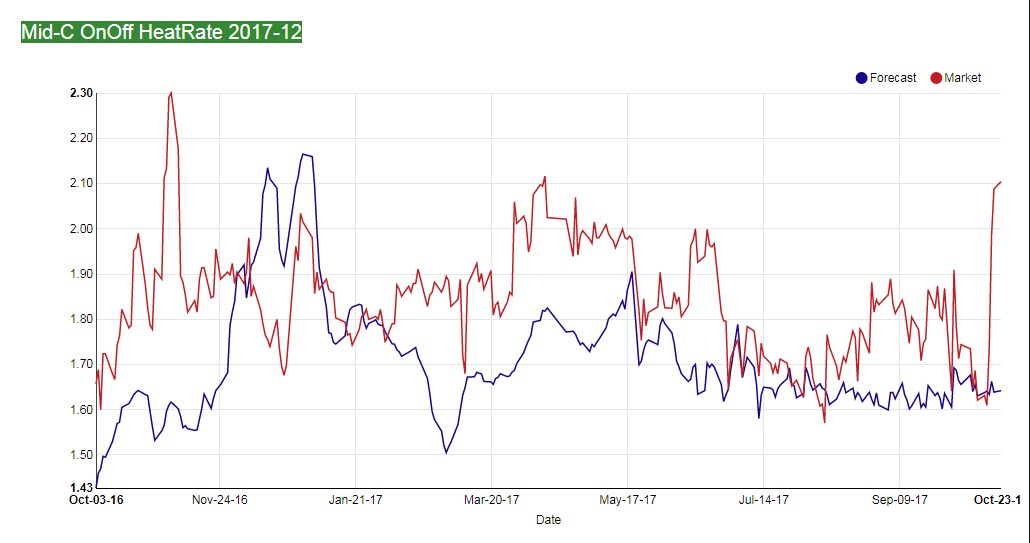 You might want to remember the name “Mid-C Dec On|Off” as she has gotten quite attractive from the short side. I’m surprised it shows up in APT- Falling, I guess because it has mean- reverted to the rolling 12-month average, but seems maybe the on/off has rallied too much? 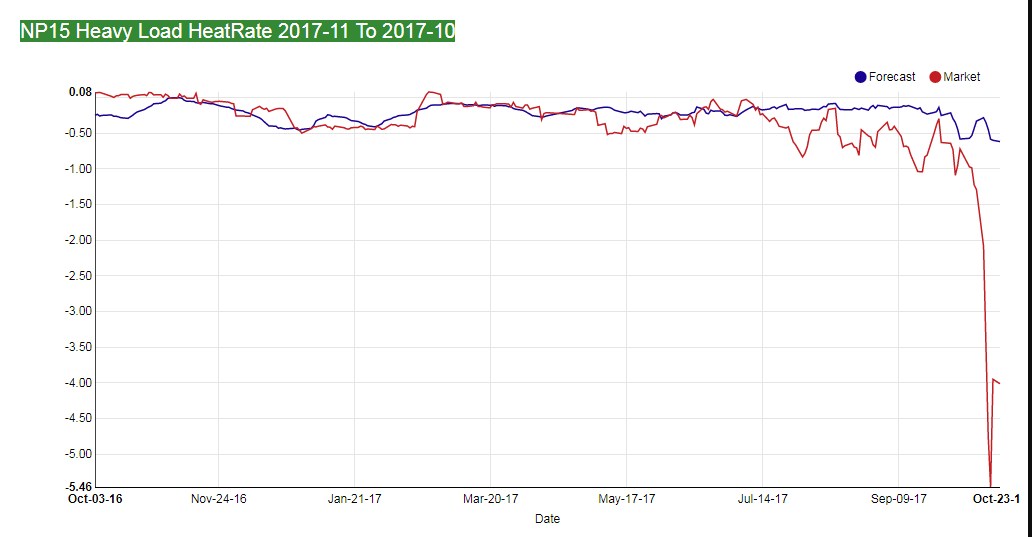 Same thing, the roll was obliterated, now it found a bottom and soared; we think by week’s end it is back to normal.