Before launching into our APT tirade, let’s take a peek at the fundamentals, plenty is going on, starting with cash: 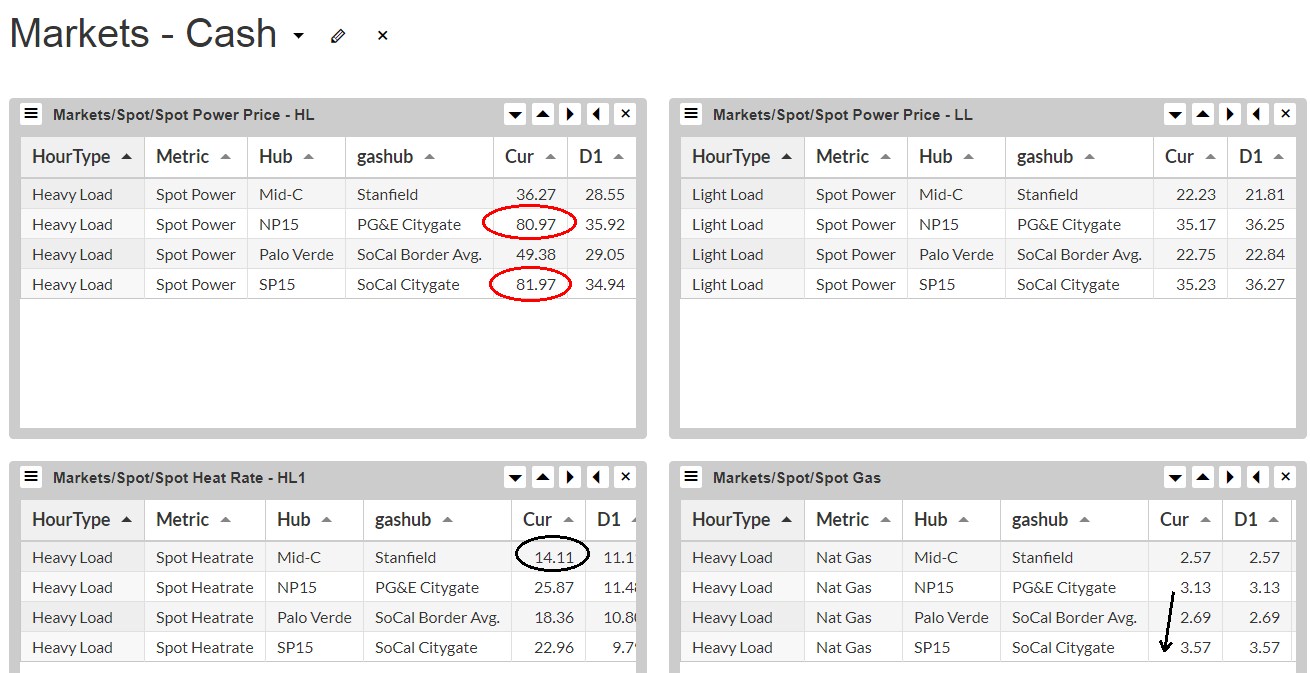 Not to be surprised, Friday’s on peak for Monday was a blowout. What is surprising is the tag-along effect. Check out the Mid-C’s ridiculous 14k heat rate for today. Hey, the DC is down, it rained buckets, and loads are nowhere, yet the market clears a crazy 14k. We get the ISO prices; those make sense; the Mid-C’s clear makes nonsense.

Socal Gas still trades a healthy $0.40 premium to PG&E and is off the charts relative to Socal Border and the Northwest. That too shall pass, soon, once LA works through its latest heat wave. That is coming. 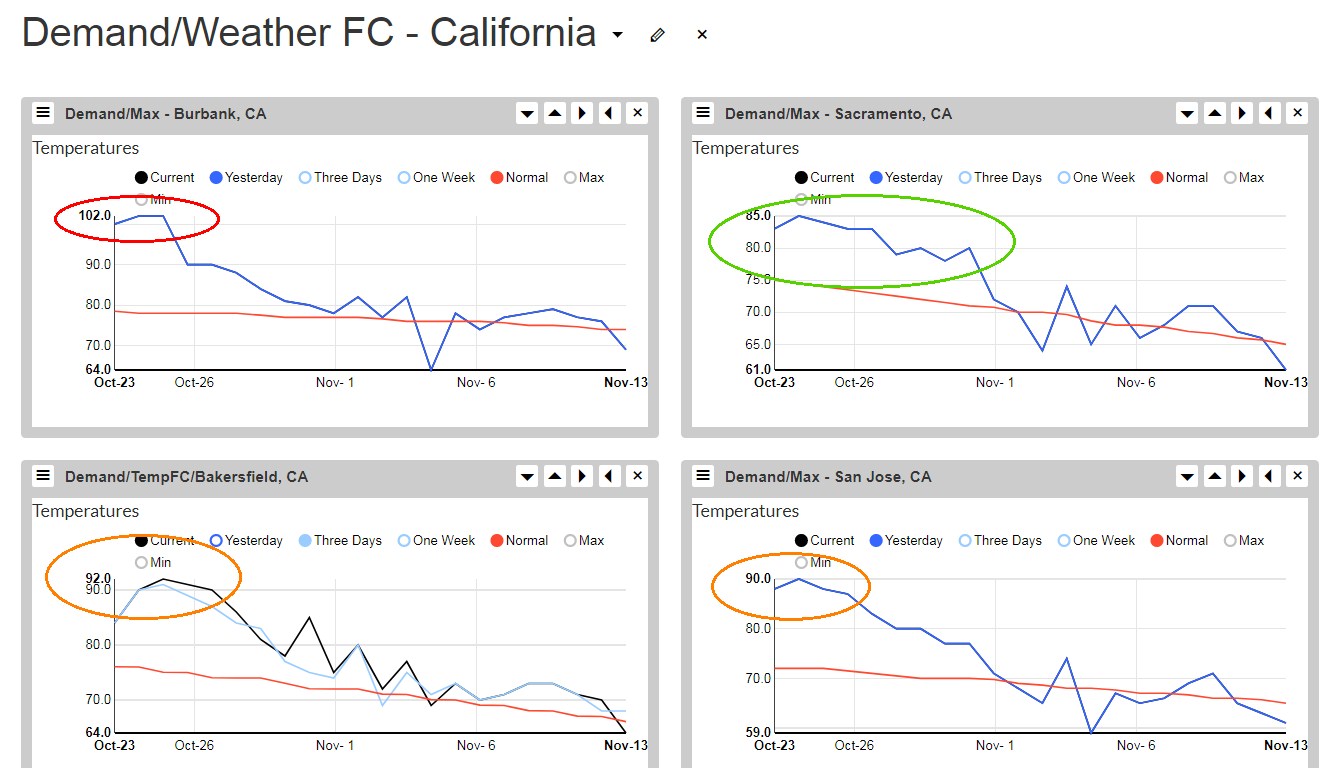 LA, as reflected by Burbank, will be scorching hot today, tomorrow, and then fall off quickly; by week’s end the city barely posts normals, and those are a very bearish mid-70s.  The rest of the state isn’t that hot; Sacramento struggles with the mid-80s for highs, yet go back to the NP heat rate and price – both off the charts for this time of the year. We’re surprised there wasn’t more congestion built into today’s cash price given the weak fundamentals in the northern part of the state. Gas Noms support that congestion: 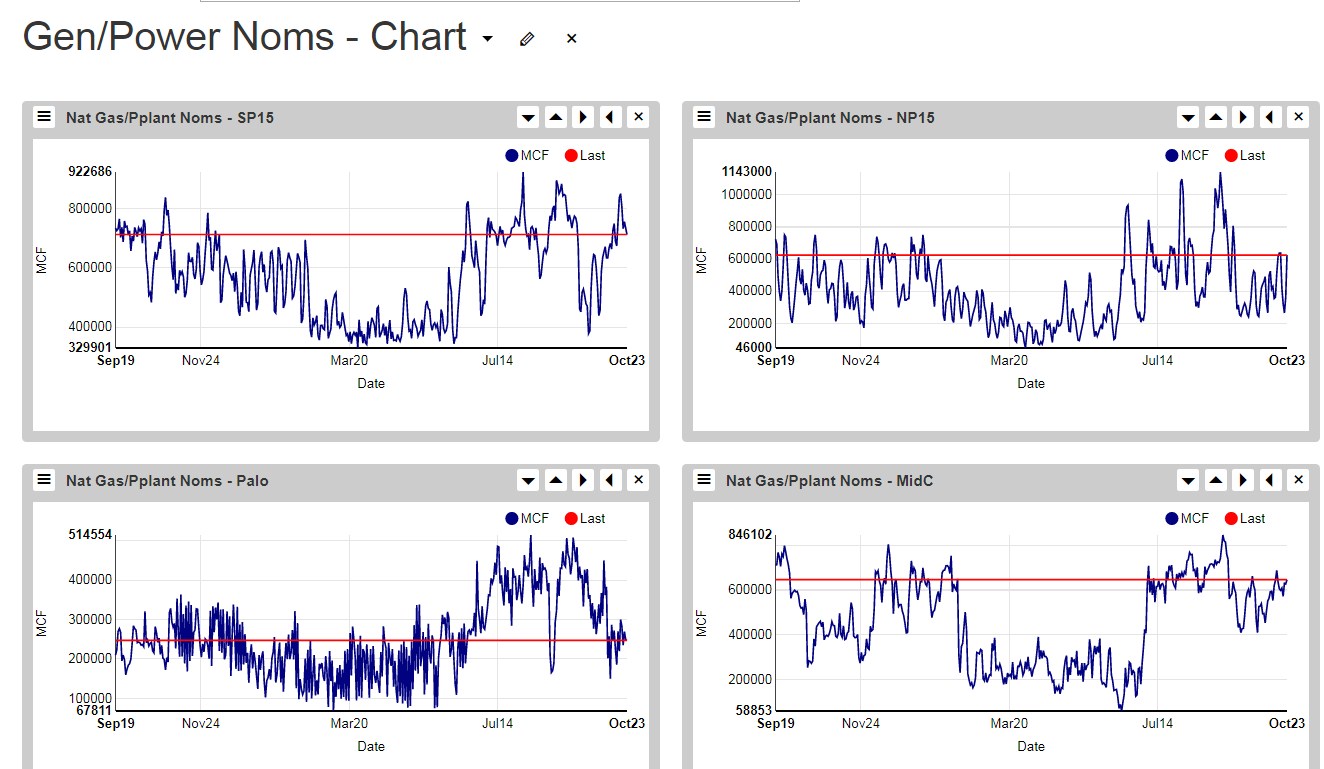 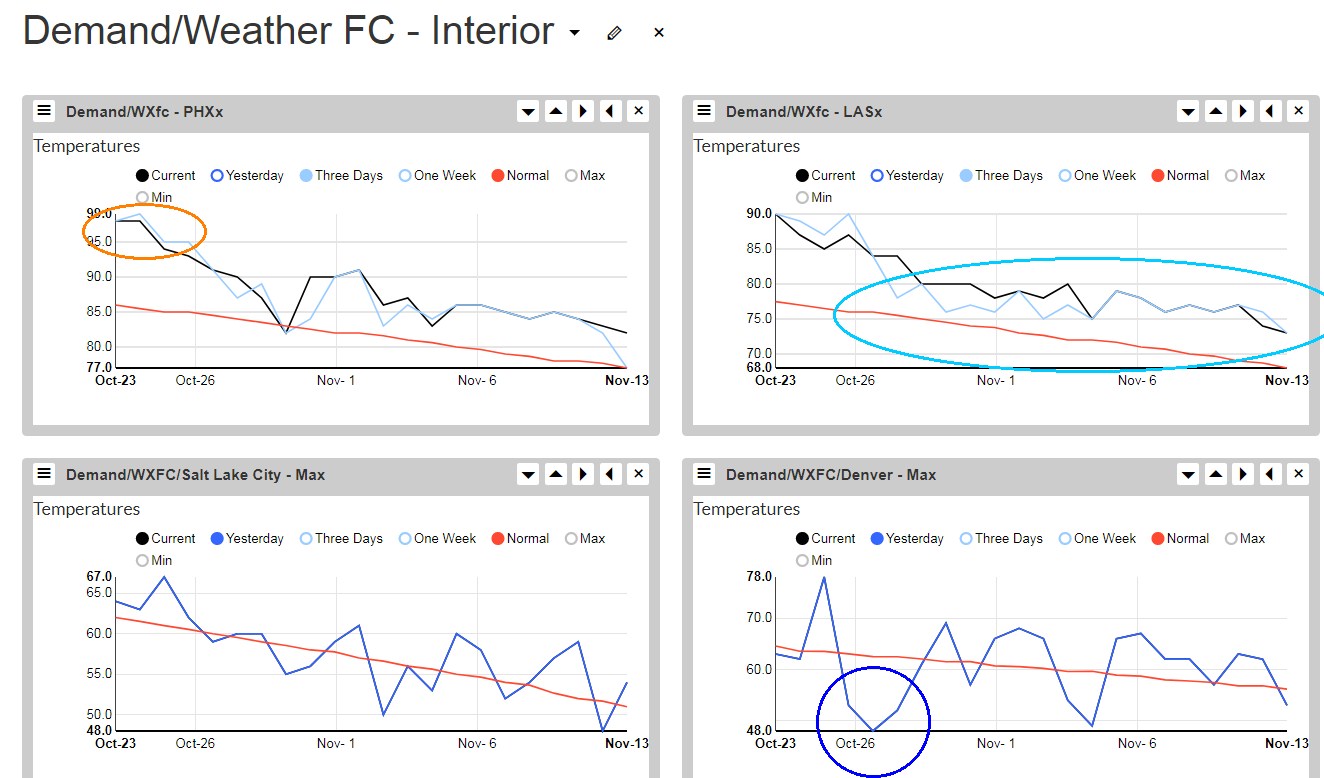 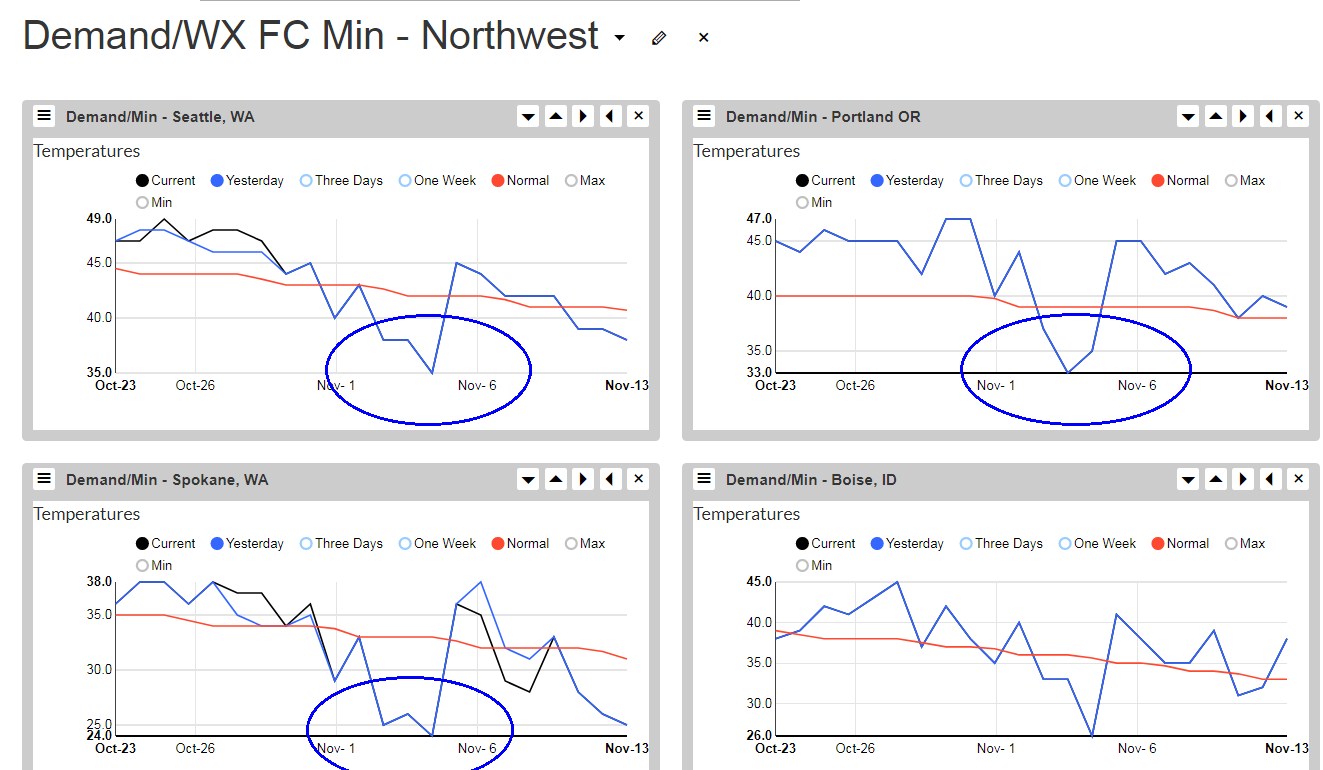 The Northwest has a different opportunity at hand – cold weather. Not this week, next week, the region will experience its first material cold event with both Portland and Seattle dropping into the low 30s for lows. Nothing close to the much-feared Siberian Express but those couple of days will be the coldest of WY18. Meanwhile, the hub is just temperate for this time of the year. 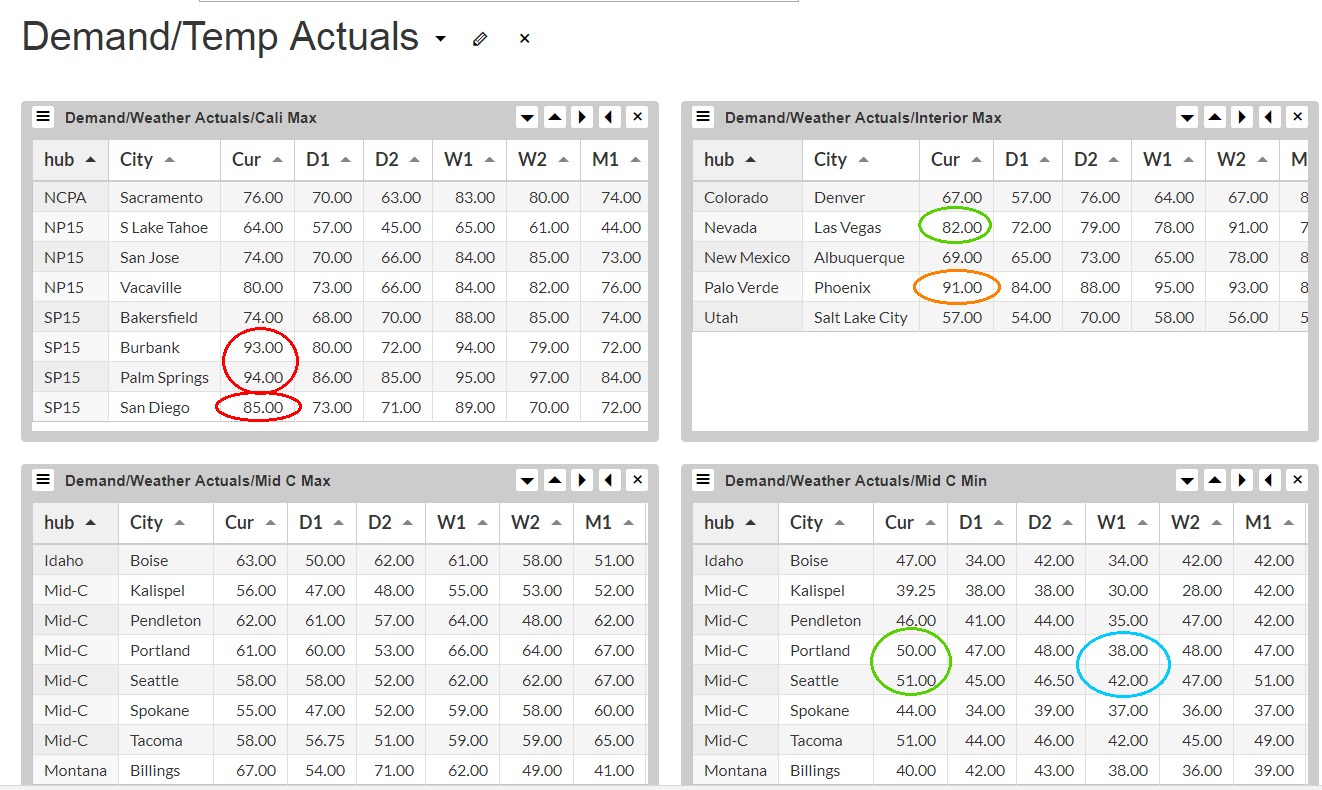 The heat arrived in LA yesterday and will grow for the next couple of days. The Dodgers are red-hot, and so is their stadium. Phoenix was kind of hot yesterday but look at Vegas, barely hit the 80s, which makes the silly PV heat rates for today look even sillier. The Northwest is almost ten degrees warmer than last week. 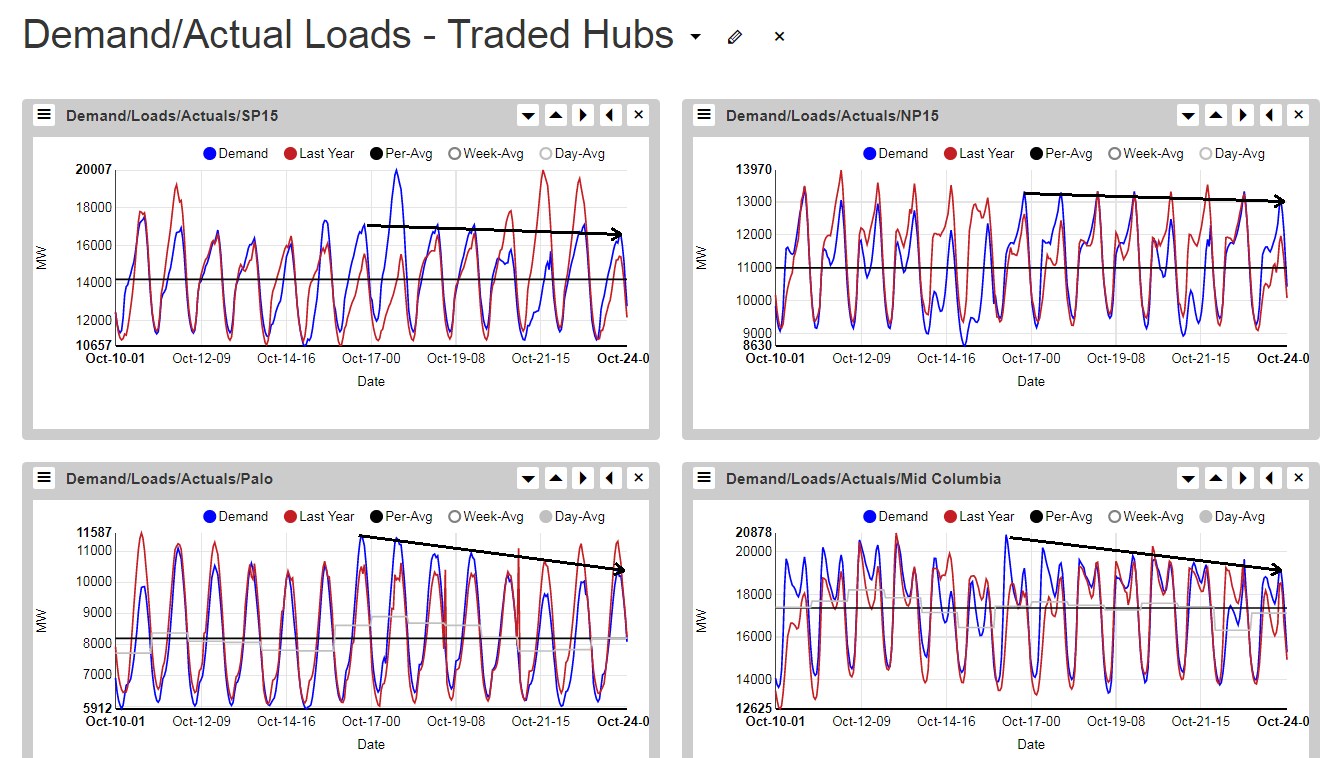 ISO loads are flat, week-on-week, while PV and the Mid-C are off sharply. All of which suggests the ISO should expect to be flooded with energy from its neighbors, except for the DC which is off-line.

On top of that extreme heat, the ISO is also ramping up its fall outages: 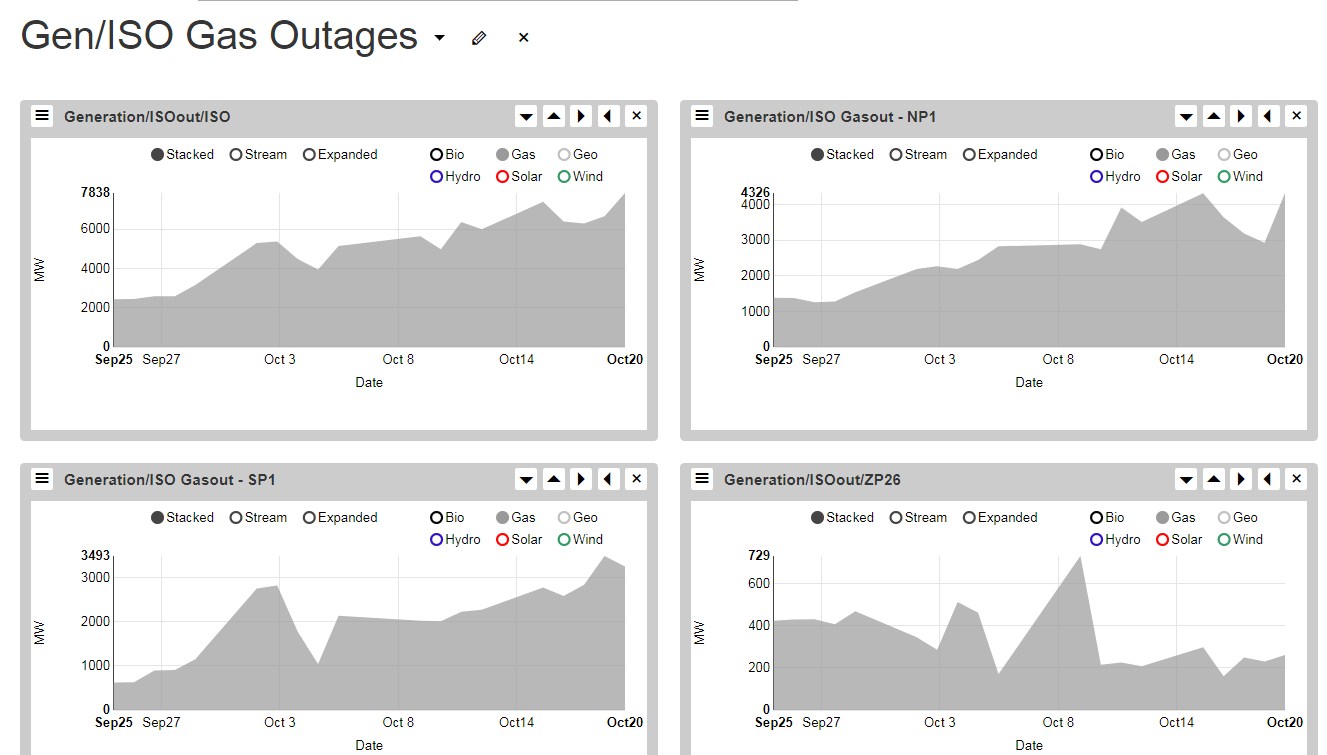 Both NP and SP are up, week-on-week. Most of this rally is coming from Planned Outages: 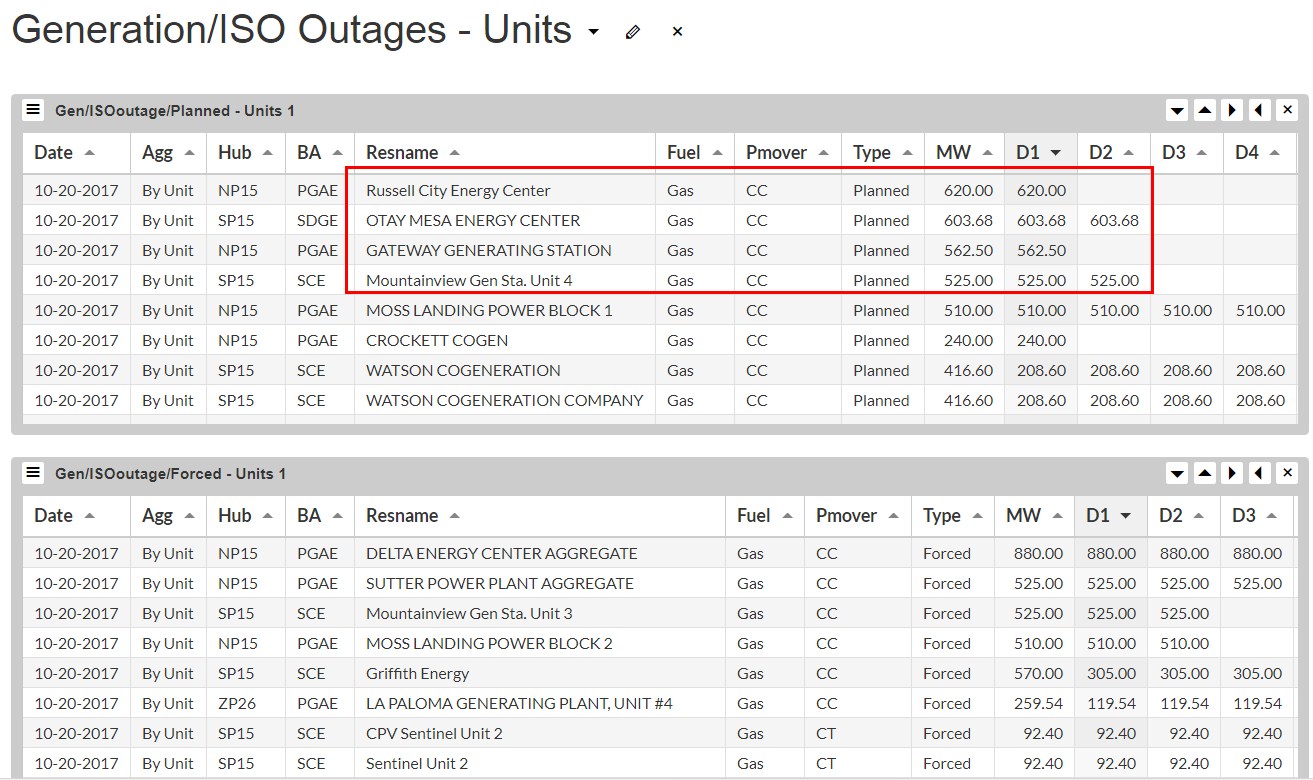 I bet the ISO wished it would have scheduled these for a week later, but it didn’t, and we wouldn’t be surprised to see LA set CY17 highs today and tomorrow in the HA markets. 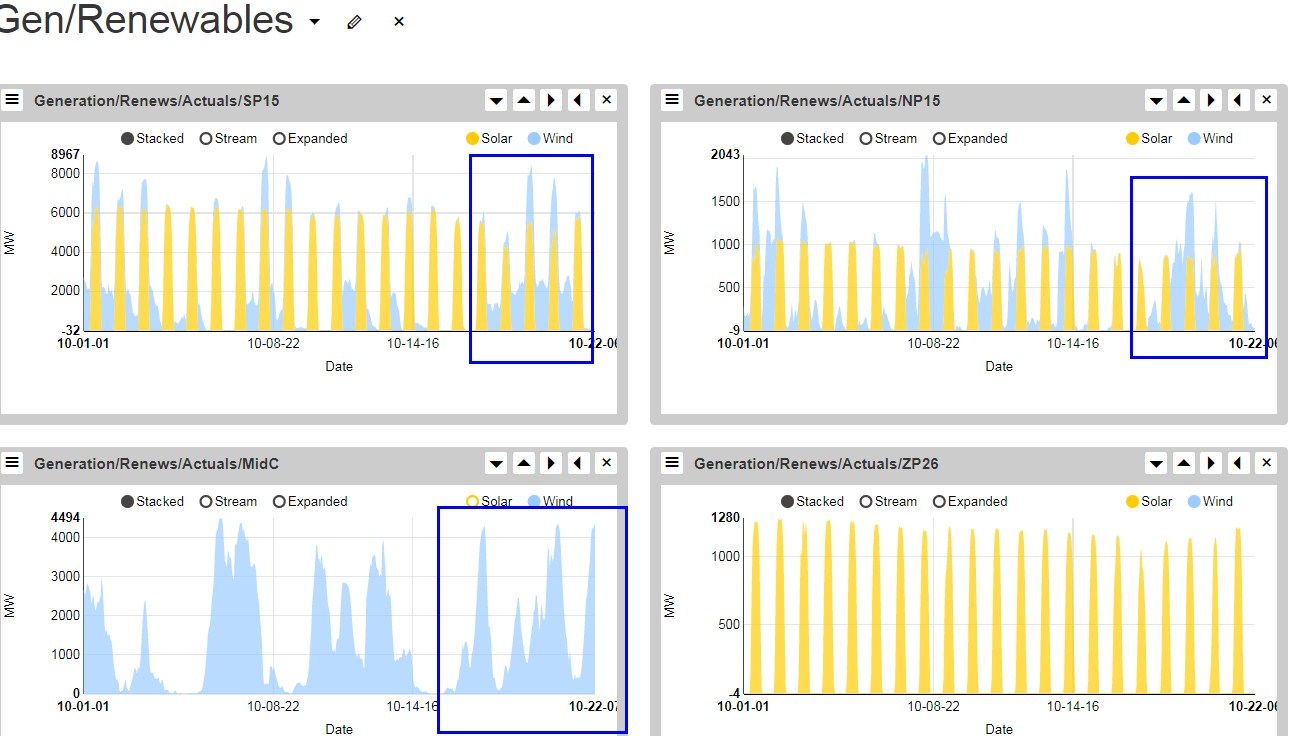 The weekend prices were becalmed, partially, by a stiff breeze that blew across the WECC. All hubs sported rallies in weekend wind energy. 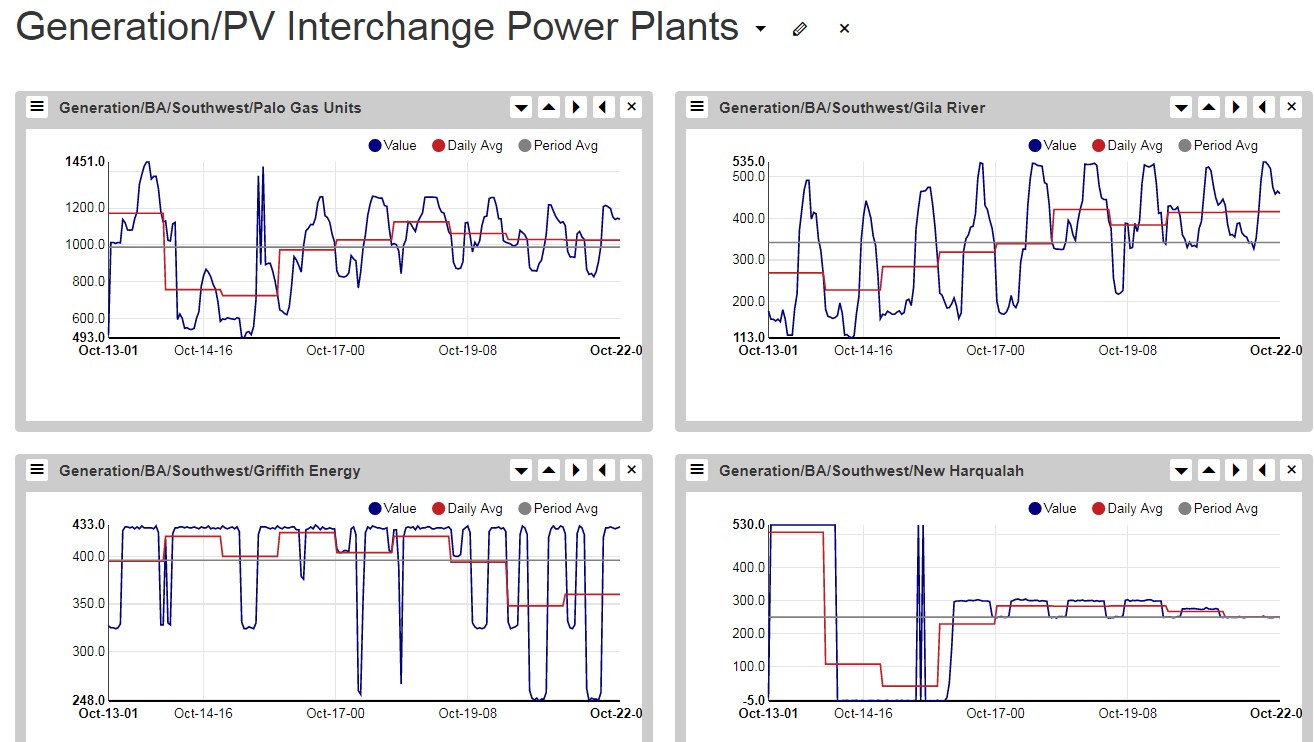 We aren’t Genscape, but we do get some interesting insights into selected plants thanks to the EIA’s Open Data Initiative. The above are hourly plots for three Palo gas plants. They opted to become Balancing Authorities and now are trapped into reporting their hourly generation and interchanges — ooops. Too bad every plant doesn’t report.

It’s a new water year, and Precipitation will drive this WY to whatever it ends up being; for now, California is starting out slow and today is staring at 21 days of drought. If the trend is the state’s friend, they’ll be re-invoking their most famous slogan: “brown’s down, yellow’s mellow.”

The Northwest is dry, too, for the next ten days but we’ve seen hints of another storm beyond. Not a big one, but a storm it is.

The above report is a new dashboard; it shows cumulative Snow (SWE) and Precipitation, both measured in inches. The tables to the right return the anomalies (% of normal). It is easy to get confused if you look just at anomalies; one would think the Northwest was in a big water year as most of the upper stations are around 200% of normal. Reality sets in when you look at inches – none of them barely have an inch. The W3 column (for precip) reflects the last week of September which is the cumulative totals for WY17.

No one will get confused by California; the anomalies are low, and the absolute values are lower. That won’t change anytime soon given the dearth of forecasted precip.

We’ve been tracking Cal hydro energy closely; watching it freefall back to reality. That trend hasn’t stopped, it is still plummetting.

The above plots compare the last year; this gives us a sense of where today’s hydro is relative to last year. On peak is at about the same level as last year; off-peak is slightly higher. All of which means most of the WY17 hangover is worked out, though the state still has full reservoirs. Now, it seems, the water guardians are clamping down on discharge as they face the potential of a new drought.

Coulee is back to its refilling ways, adding two feet in the last five days. That regulation change resulted in the plant’s output falling.

This is a new dashboard and was built off of our COE Energy Report.  The chart returns actual generation through last hour for about 25 projects reported by the Corps. The table is a capacity summary, and inversely also an outage recap, for five Northwest projects. This data is also updated hourly. Weekend energy is about the same as last week, though the derates are up a touch.

Flows on the Peace are off while up at Mica. Note the mini-surge on the Canadian Kootenay – all from recent rains. 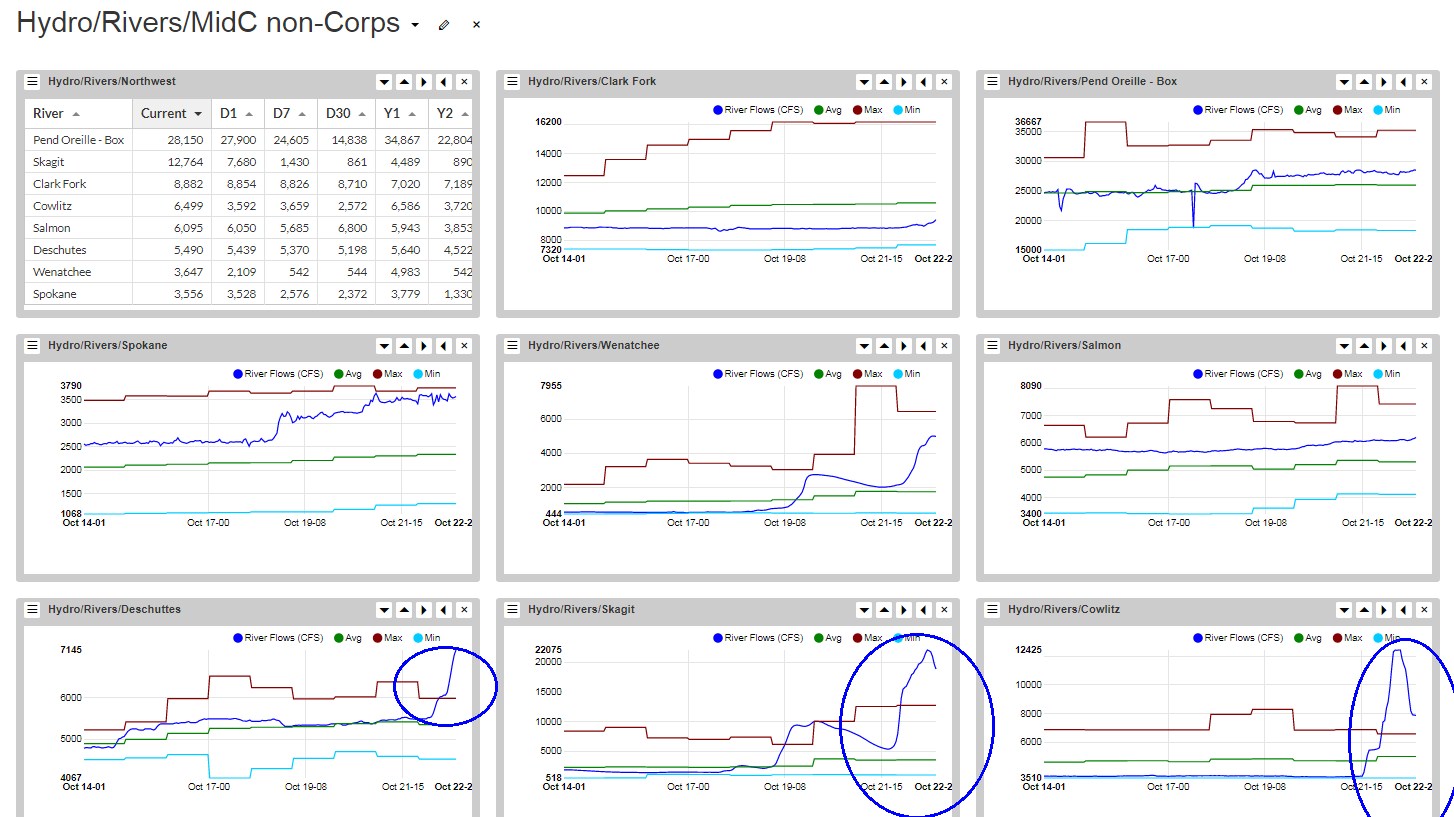 Those same rains have driven discharge up at all of the west-side projects. The Skagit soared, so did the Deschutes, but all stations will mean-revert as the region goes dry for ten days.

Powerex stepped up and was a net buyer at the Mid-C over the weekend; that is something we haven’t seen for a while. Flows out of PV are rallying while the AC is parked on TTC limits while its sister line, the DC, is out for maintenance.

We see no signs, yet, that the DC outage will be extended. It has happened before, and we’ll be watching.

The ISO has the Palo line derated, aside from that outage, not much else to report.

Outages seem to show up sooner in BPA’s hourly reports; we see from the above that the ute added a derate on the AC today.

The ISO will rage, especially in SP, while the other hubs enjoy the virtual transmission free rider and rally with the hub. We’d probably be fading most of those outside hub rallies, but wouldn’t think of fading LA, at least not until later this week.

More on that in our Monday APT Front-end post coming soon.