With the STP being delayed a day thanks to a federal holiday, here are today’s fundamental-based highlights.

A majority of stations are forecasting cooler than normal temps over the next 10 days, particularly in Mid-C where all stations are below average.  SP-15 is a mixed bag, but San Diego stands out as the warmest (from normal) station in the West.

Denver will jump 17 degrees over the next two days before again falling below normal as we move into the weekend.  The 14th in particular has been reduced seven degrees from yesterday’s forecasted high, and marks the beginning of the next mild warm-up, ultimately leading to a high of 75 by the 19th.

Salt Lake should reach 75 tomorrow, eight degrees above normal, before taking a long trip below average — nearly two weeks.  Highs should bottom out at 53 on the 14th, 13 degrees below normal, while daily highs aren’t expected to cross above normal until the 26th.

A cooler than normal Mid-C is expected over the next ten days, and Seattle is no exception.  Daily highs should stay at least five degrees below normal, and as much as seven degrees from average by the 11th.  There is a chance of a brief warm-up on the 16th with a return of 60-degree highs, but that will be short lived as another cool-down is close behind.

The average daily high anomaly is even more extreme Portland as highs fall more than 10-degrees below average on the 12th with a high of just 55.  Like Seattle, a brief flirt above normal on the 15th is expected, an increase of four degrees from yesterday’s forecasted high.

Spokane on the other hand is seeing its floor collapse as highs fall into the 40’s by the 13th, more than 13 degrees below normal.  including today, a total of just three days are expected to reach above normal for the remainder of October.

Spokane minimums will also drop below normal, but not at the same rate as daily highs.  The area should have a brief flirt with freezing temps on the 13th with a low of 32.

San Jose’s daily highs are rolling like waves coming out of the Pacific as temps move from a high of 83 today to 73 by Thursday, and return to a high of 82 by Sunday.  The forecast calls for a continuation of alternating above and below normal through at least the third week of the month.

While San Jose should see a fairly even split above and below normal for its daily highs, Sacramento should trend slightly below normal for the remainder of the month, particularly over the next few days as highs reach just 74 on the 12th, six degrees below normal.

Burbank got a moderate increase to its forecast from the 12th through the 17th where as many as five degrees were added, bringing highs into the upper 80’s by the weekend.

While the desert’s average temperature line will fall eight degrees by the end of the month, daily highs are expected to stay north of normal every day over the next three weeks.  Highs may reach 96 tomorrow, six degrees above normal, and the weekend is now trending five degrees warmer than forecasted yesterday. 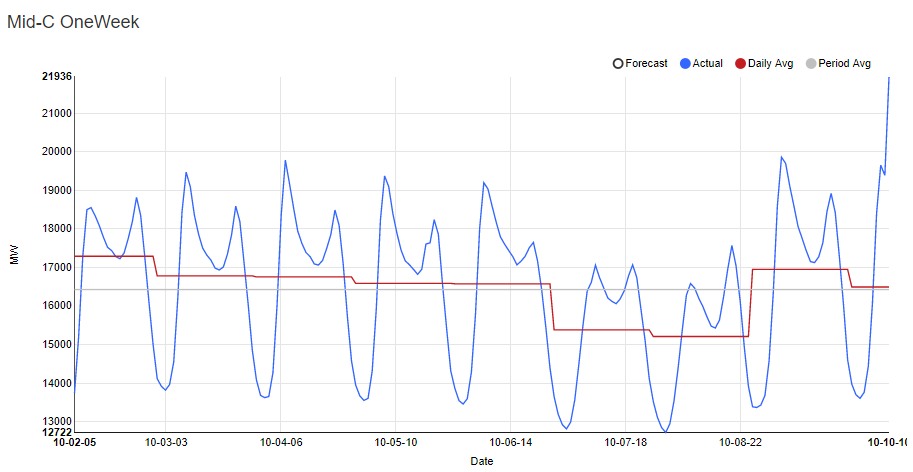 Demand peaked at 19,857 MW yesterday, up 1,040 MW week-on-week.  Monday’s average daily demand increased 1,700 MW from the weekend, and was enough to push above all but one day from last week. 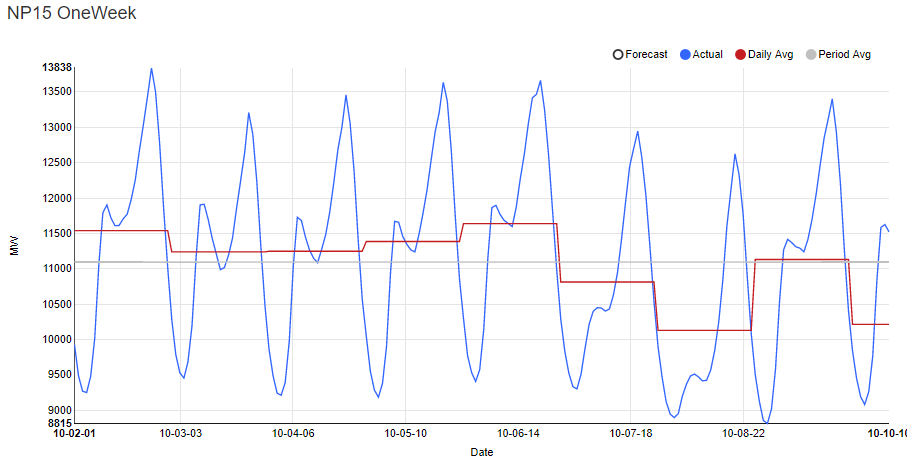 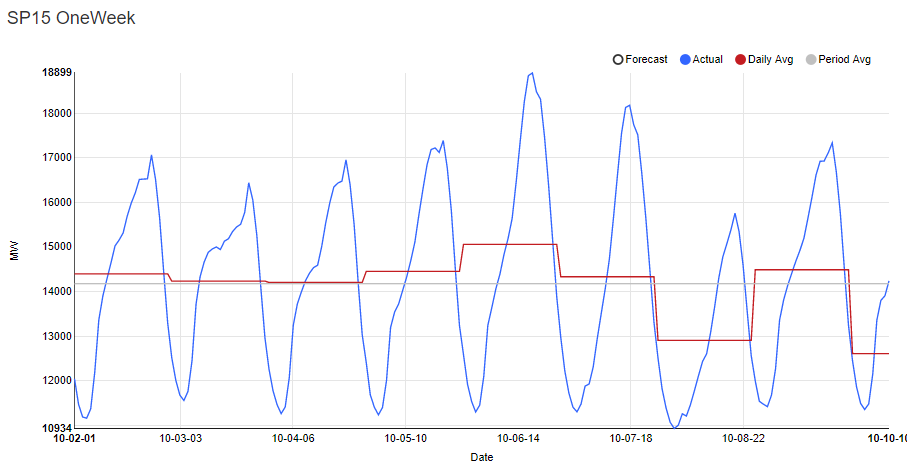 Peak demand grew 270 MW week-on-week yesterday as loads got as high as 17,334 MW.  This was enough to push the daily average to 14,490 MW, higher than all last week aside from Friday.

PV1 dropped to 0% over the weekend, and has remained there since the 7th.

We are still awaiting the STP update as the government observed Columbus Day yesterday.  The 10-Day forecast suggests a steady increase beginning at the tail end of this week, eventually culminating in a high of 7,121 aMW. 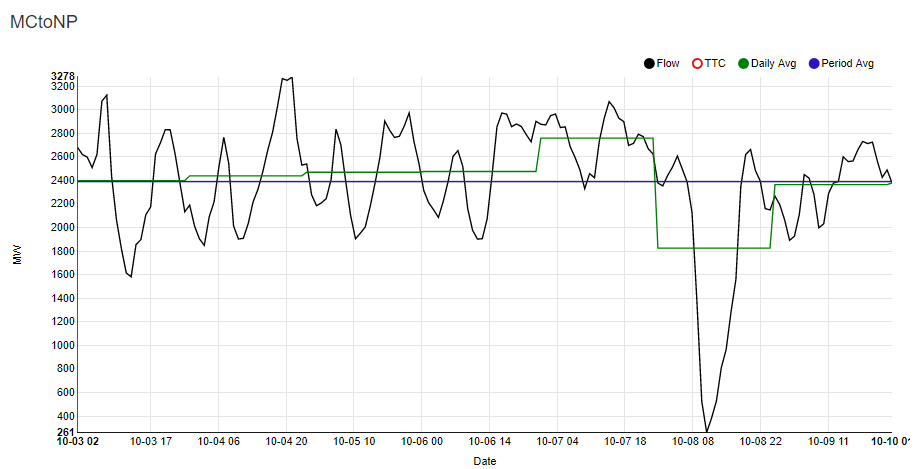 Flow dropped to just 261 MW on Sunday afternoon, dropping the daily average to a several-week low of 1,826 MW.  Flow rebounded yesterday however, pushing the average up more than 400 MW and finishing just below the weekly average of 2,390 MW. 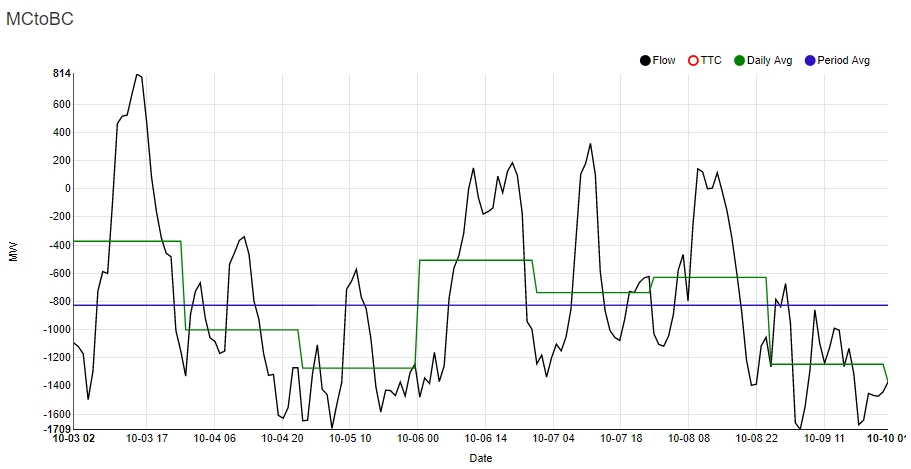 Flow dropped heavily yesterday as southward movement picked up, bringing the daily average down to -1,246 MW, the second lowest average in the past week, and more than 400 MW below the weekly average.