All good things must come to an end, and the heat in California was not even that good, and it is ending, soon. The heat in Palo lingers, and the cold in the Northwest threatens. Meanwhile, the MidC is feeling sloppy, Coulee’s reservoir elevation is creeping up even while discharge rallies. The hub is feeling mushy, and now only cold, dry, and windless weather can save cash. Even cash in the ISO seems vulnerable to the changing climes.

Those 90s in Burbank, by next week, will be a distant memory as the hub wallows in the mid-70s, mostly a no-load event. The Great Bay, represented by San Jose, falls a bit harder and is just pleasant.

Phoenix, on the other hand, will stay above average for two weeks, per this most recent NWS forecast. Even that may not be enough to save the hub; things are feeling soft there as well. Exports to the ISO, out of Palo, have doubled. Exports everywhere are on the rise as all hubs hate themselves and all want to send their power to the Cally. 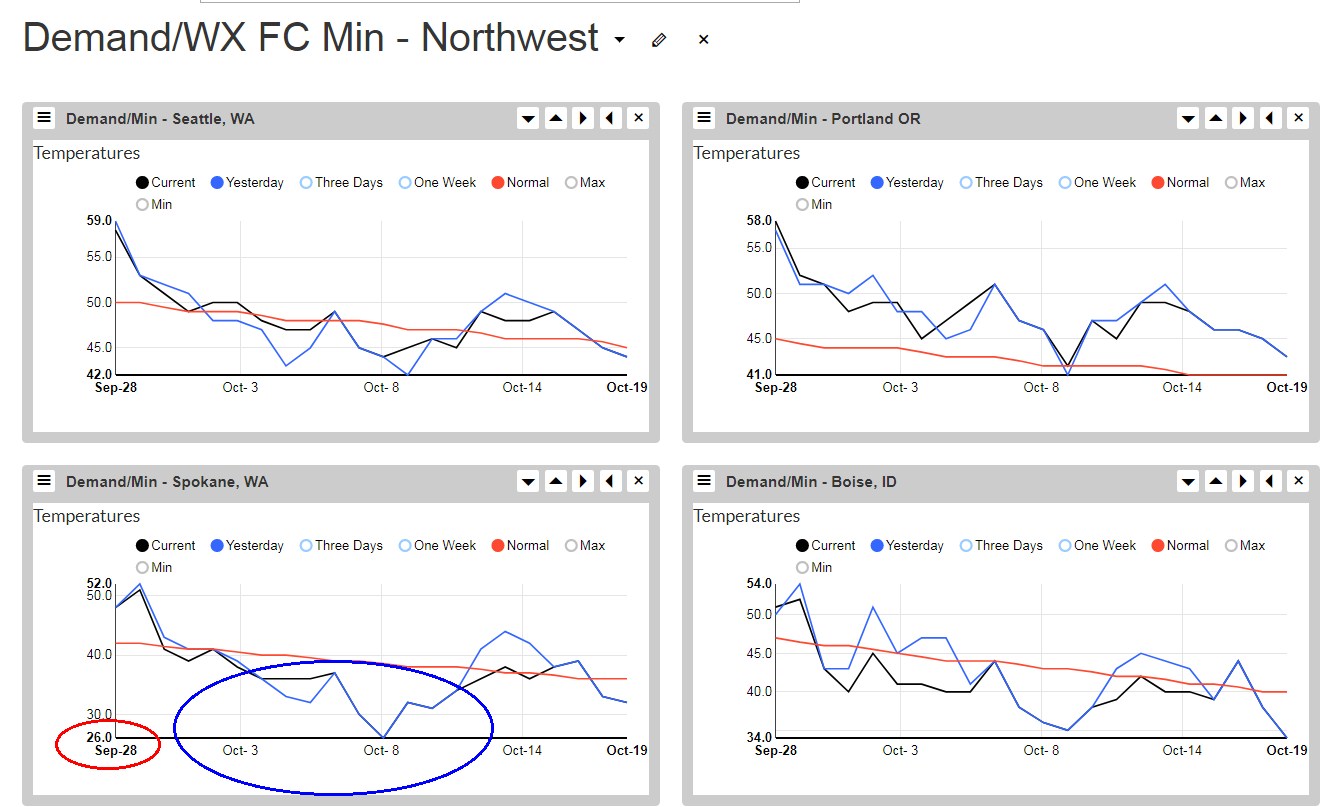 We waffled back to posting Mins at MidC, seems appropriate given that the cash prices are minimal. Spokane gets a couple of circles because it drops below freezing, the first for the season. We need Portland and Seattle to move into the 30s, if not the 20s, but they don’t. 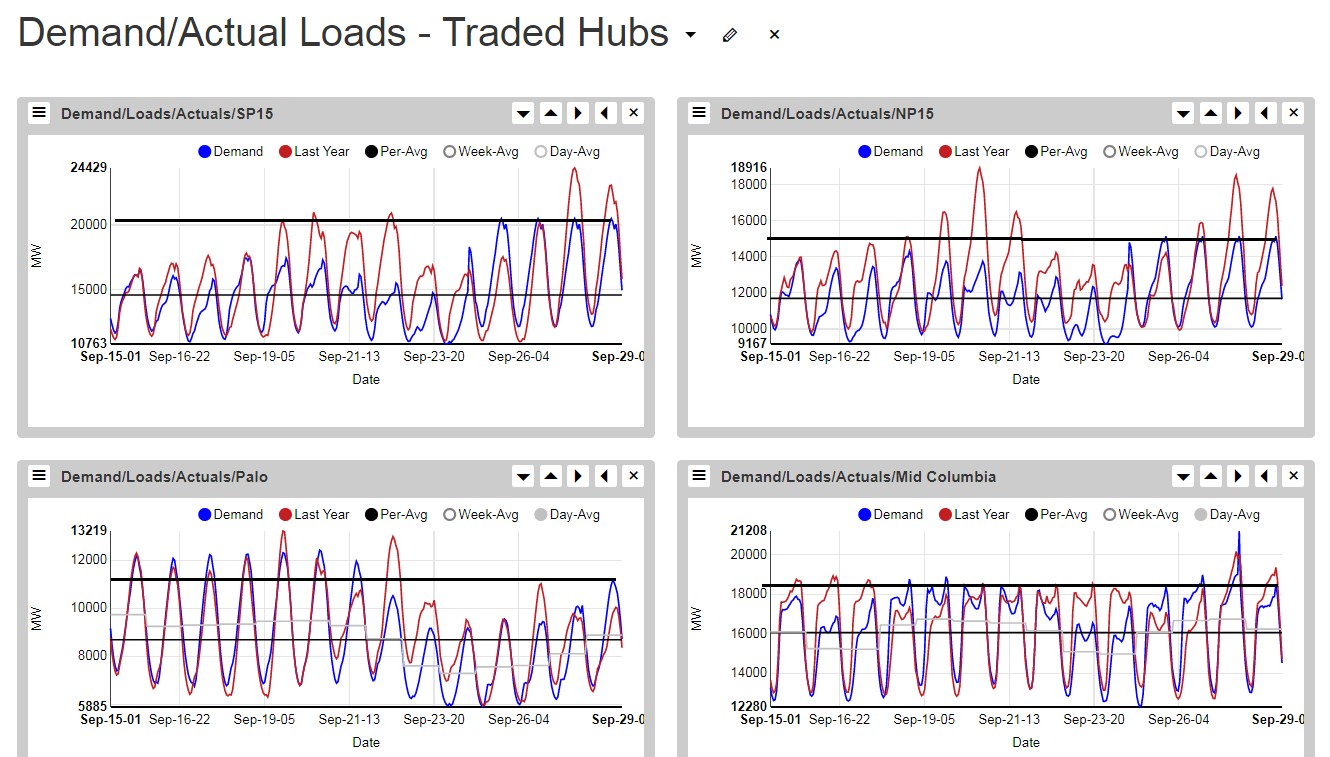 Check out those load rallies at SP – hah! What little loads did move up were easily absorbed by increases in imports. 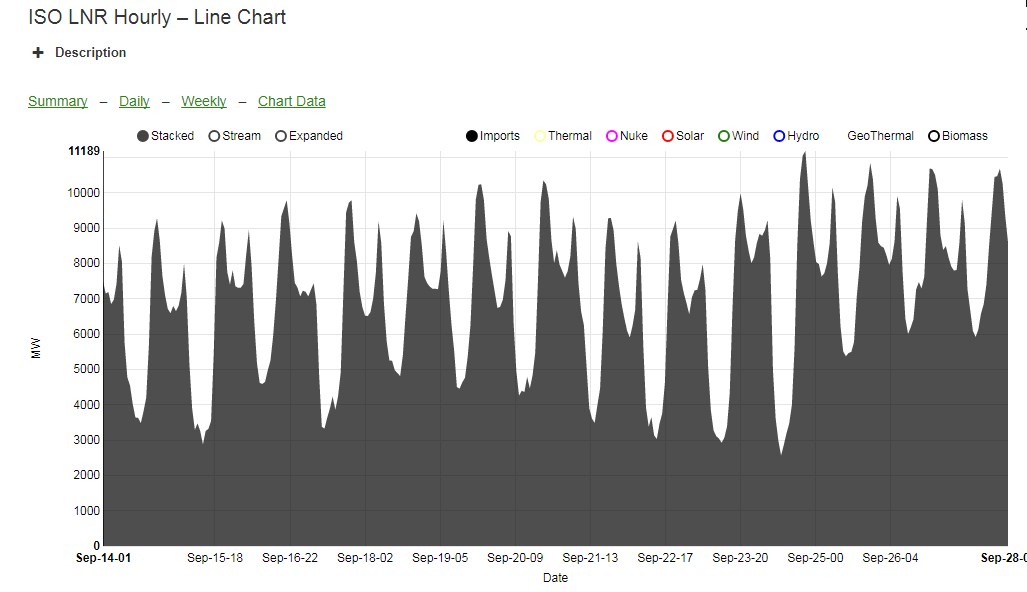 And the bump in imports wasn’t just chasing HE20-21 post-solar hours, look at the massive rally in peak solar hours. All of which is reflective of a long WECC and if any hub (SP in this case) shows any signs of bullishness the rest of the region floods it with energy.

This is a new dashboard, we grouped all the North cities together and show max:min. Here is the south:

Some red circles, those were in NoCal; Burbank wasn’t that warm, but look at the highs in New Mexico – 60s. Hard for PV to rally when its neighbors have no HVAC load. The Northwest temps were just mild and are going to get milder.

The nukes are running, won’t bore you with that trivia. Outages inside the ISO are still at season lows, but that shall begin changing soon as the state ramps into its Fall maintenance.

Don’t get too excited over that recent spike; those are almost exclusively hydro outages. The circles reflect each year’s peak Fall outage (all fuels, all types); most of those occurred around Nov 10.  At current levels, expect an additional 7000 MWs to come offline, but doubt the ISO even notices, unless there is late heat. 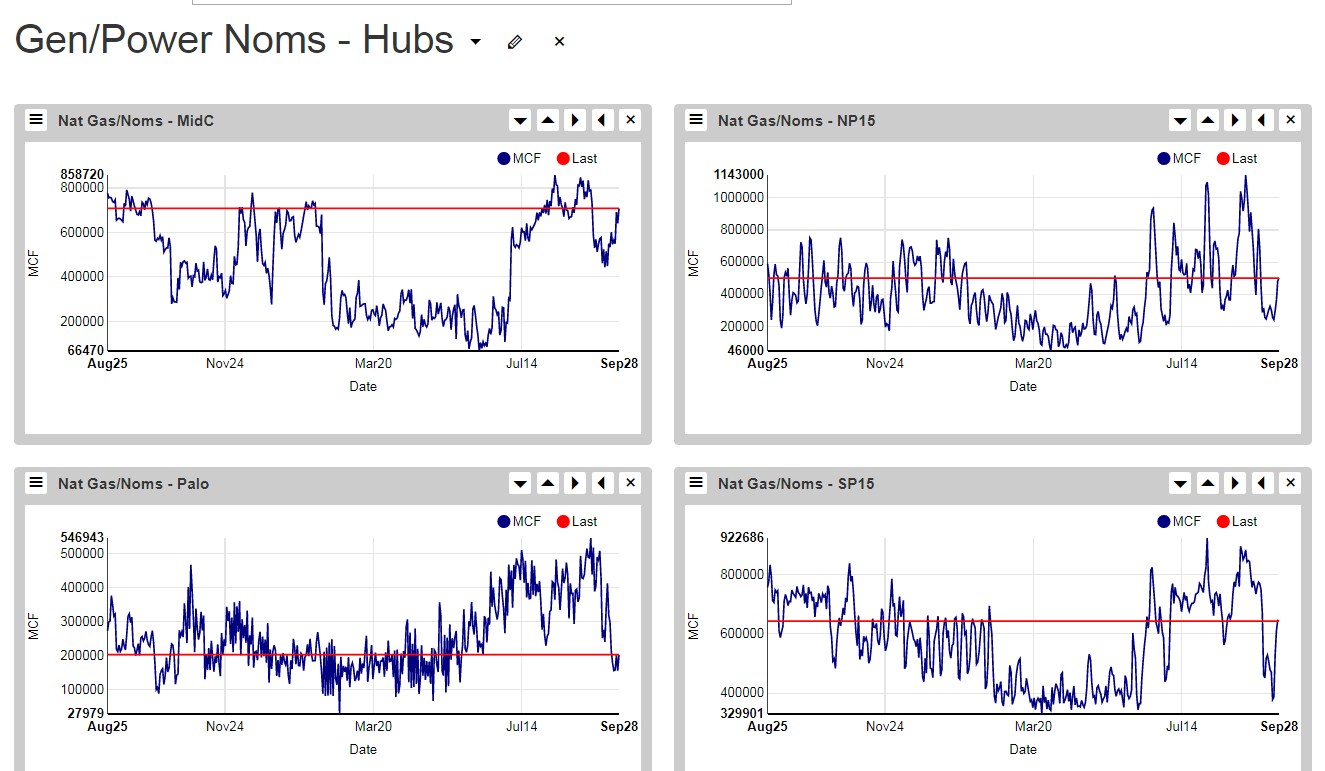 Noms staged a rally, of sorts. Even the MidC popped up, but Palo may have turned on a third honda generator.

Imagine what the market would have looked like if the wind had blown, anywhere. It didn’t, was calm everywhere. That will change, storms are a blowing in bringing rain, clouds, and wind.

It’s almost October; we can post Precip Forecasts now and will:

We like this snapshot as it shows Cal and MidC, then does a  breakout by station. The MidC will be wet, not biblical, but just normal, which is a lot more rain than the hub has seen since Spring. Even Kally gets a dusting, just a trace, but perhaps that is a trend-breaker?

Check out this summary of ISO Hydro-Energy:

We’ll argue that ISO Hydro remains the most important variable coming out of summer. Now it looks like the hub is finally shedding itself of the WY17 overhand; yesterday’s Max HL is now lower than a year ago, and it was reasonably hot in the state — you’d think they’d crank to serve load, they didn’t. The off-peak, though, has more water than last year – ghoulish for the LL markets.

This set of charts is also a new dashboard. It plots Max, Avg, and Min by day for HL and LL. The drops in HL are steeper than LL, confirming the above table.

You’ve seen this one before, HL on the left, LL on the right. The On Peak is plummeting at a steeper pace than the LL, but both are well above the 12-15 levels.

Coulee had a weird spike in its forebay, and now the pond is almost full. The reservoir levels rose even while discharge moved up, all of which speaks to the weakness at the hub. Just wait until that DC goes down.

MidC spot gas took a big dump, relative to the other WECC gas hubs, dropping $0.12 while the others were unchanged. The cash spread against NP has also widened, but we think that is off of those mid-90s at San Jose, and that city is going back to the mid-70s.

We’ll be taking a walk through the term market later this morning, until then, we’d be biased bearish.