Some interesting trades, some new developments, but first let’s look at the weather because in late September that is all that matters. 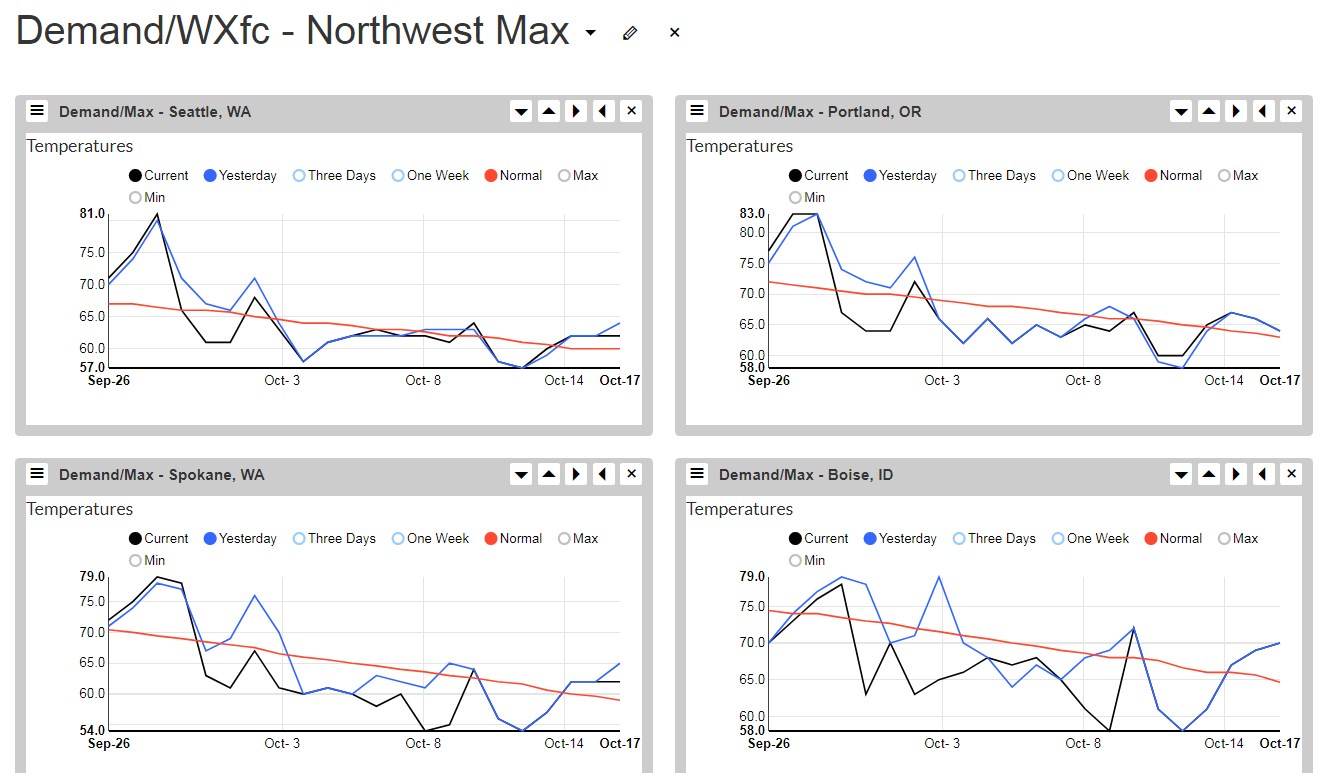 Northwest realized a slight build in its “heat” then a massive drop, more so than yesterday, and now the outlook is just chilly and loadless in Seattle — and Portland. Even the “heat” isn’t hot and, given the cool evenings, only a few hours will see spikes. 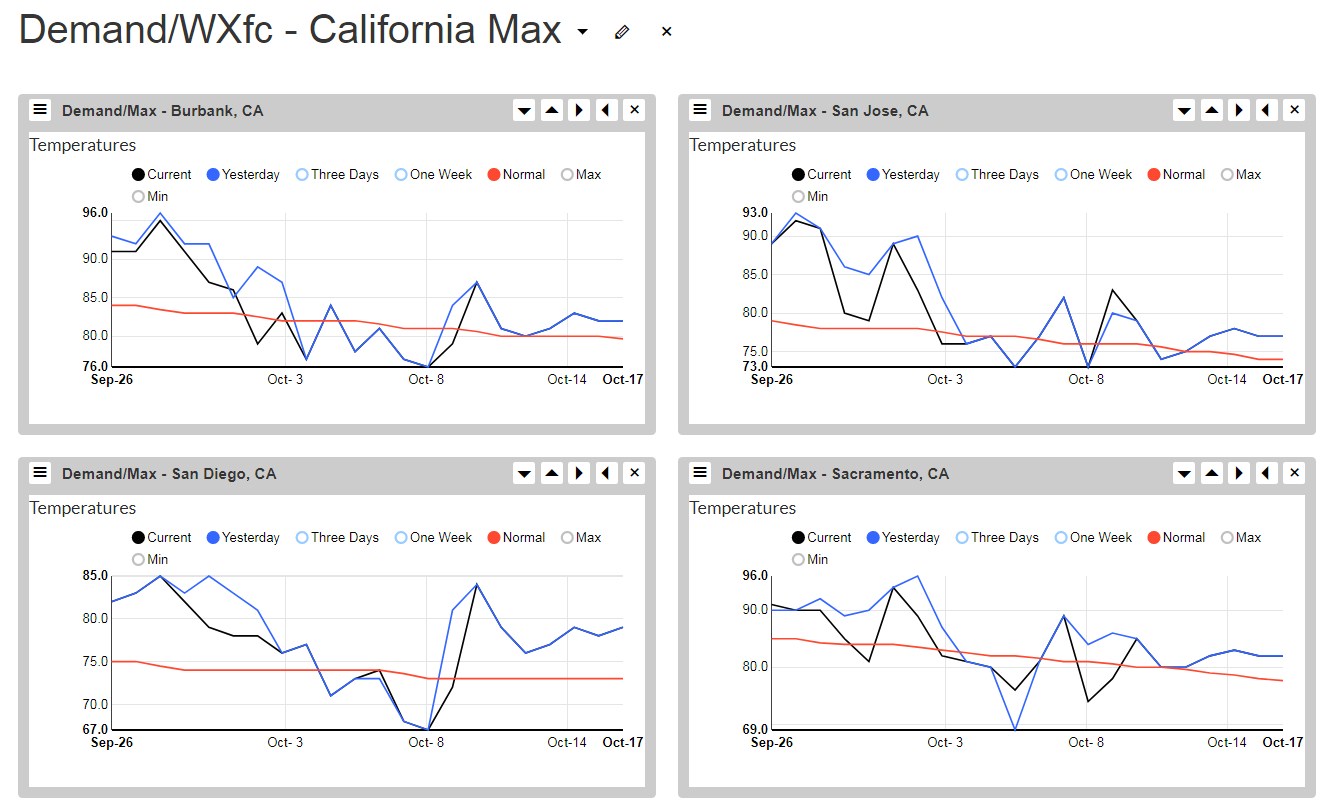 Burbank saw a slight decay in its heat, no quotes because this is real heat for late Sept. San Jose, however, has seen a major pullback in days 6-10. The Bay Area will still be warm most of the HL days this week, but days 6-10 are off, as they are in LA. So the party is a short one, and with relative weak outside hubs, doubt we see many fireworks. Maybe a bottle rocket goes off for a single tick. 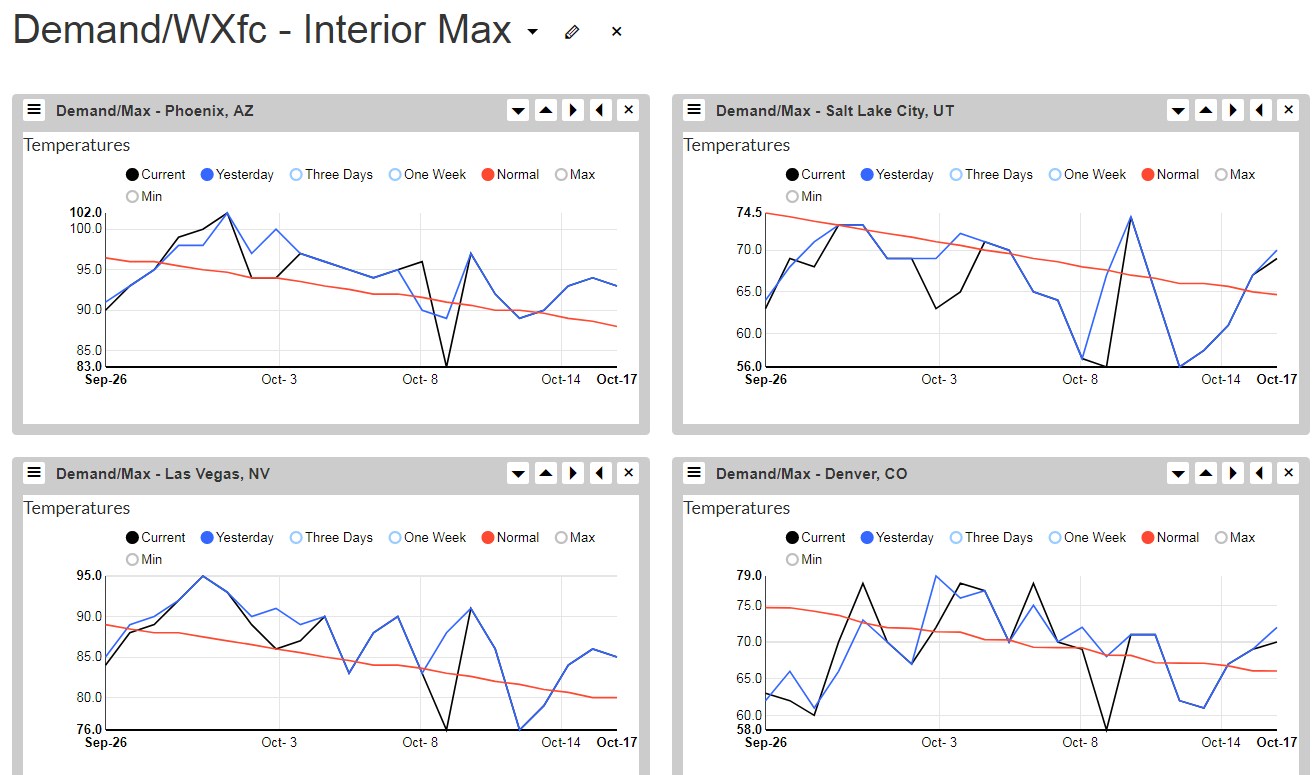 The desert slowly builds and, while Cal decays, rallies hard into the low 100s. Interesting, because the SP-PV spreads have blown back out (See below).

We pulled four from this table; our search criteria are good ranks and big WOWs (Week on Week changes in Rank). Good ranks without big WOWs most likely were reported in a prior post. 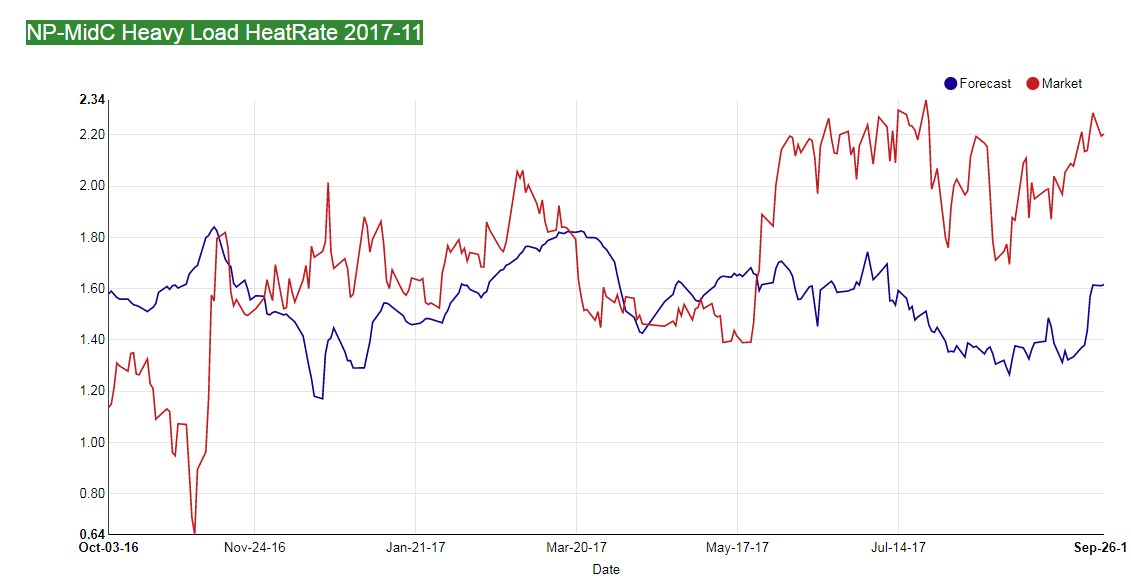 The spread has blow back out, after it came off twice, and is now near the contract high. Our belief that the STP has low-balled its 120-day forecast would lend us to approach shorting with caution but, if you had to sell, now is not a bad time to liquidate. We’d expect the trade to come back off given a weakening in NoCal loads next week; plus ISO hydro remains strong and planned outages are weeks away. 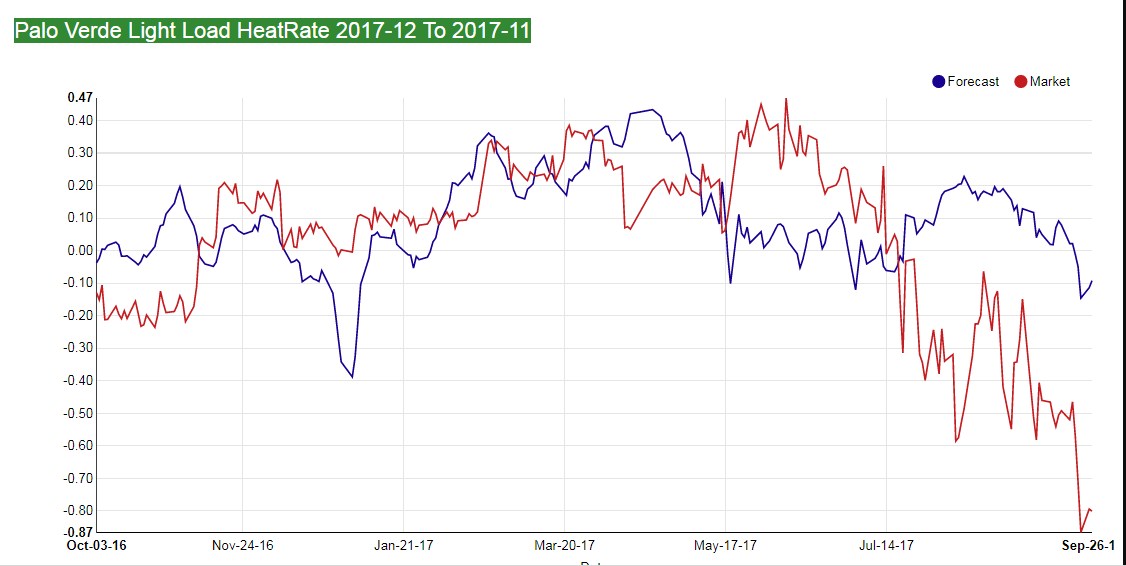 Oooh, lah lah; the bottom fell out of this one. The market hates the DEC, loves the NOV, and we don’t know why. Sure, a nuke will be out for a few weeks in Nov, and so will more than a few coal plants, but loads will be higher in the Interior hubs, as they will also in PV. Using our forecast of demand served from the stack, we see Dec LL is way more bullish than Nov:

Well, maybe not “way more,” but the stack tightens throughout the month after hitting a low around mid-Nov. We’d buy this just because it is cheap; we’d also buy it because it is miss-priced. 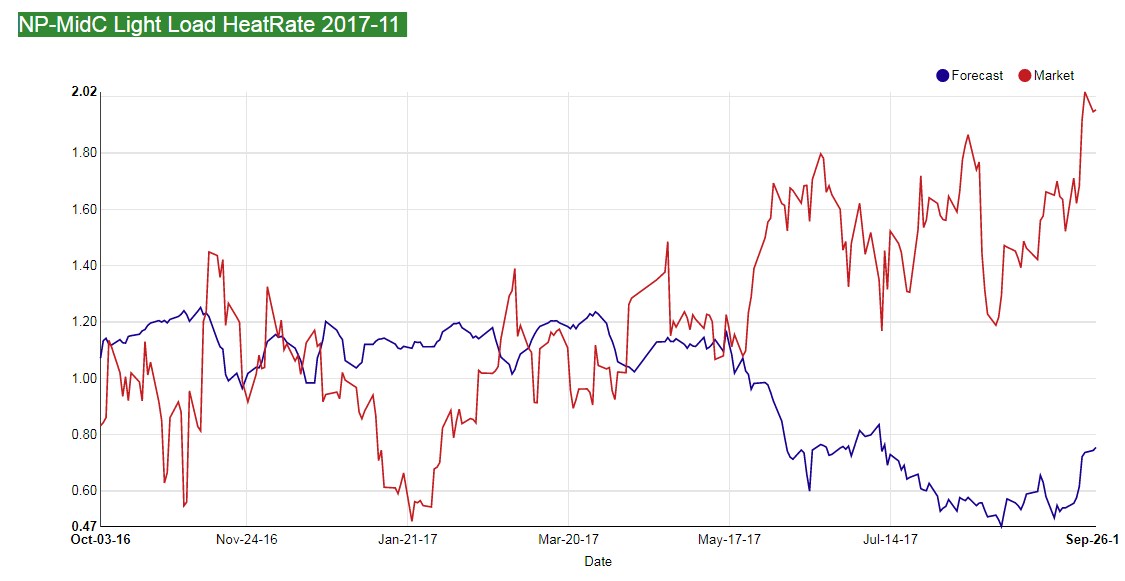 Another one that has seen a blow-out top, and now a slight reversal which may be setting itself up for a major drop. We fear the RFC upping its STP, we fear big late-Oct rain like we saw last year, but we embrace early MidC cold. Sure, half the month is DC less, but the other half has the line fully rated (assuming no maint. extensions). This trade is the same as the HL, pick your poison or Texas hedge and short both. 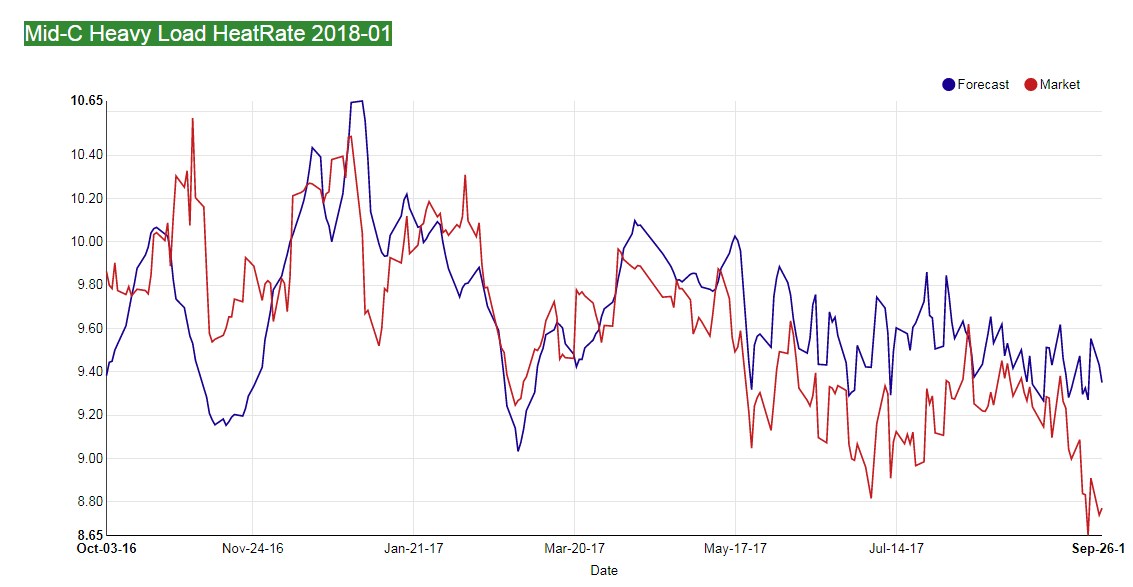 Looking a bit further into the curve, into January, we see Mr. Market puking out its Jan MidCs. Why? What does Mr. Market know today, on Sept 26, that he didn’t know a week ago, or two weeks ago? The only thing he knows is that last year a mountain of low-level snow started melting in Feb. Well, that is true, and obviously, the same thing will happen a year later, right? Wrong, Mr. Market’s a dork.

The next trade was culled from APT by sorting on WOW, descending, which renders the biggest upward rank moves at the top: 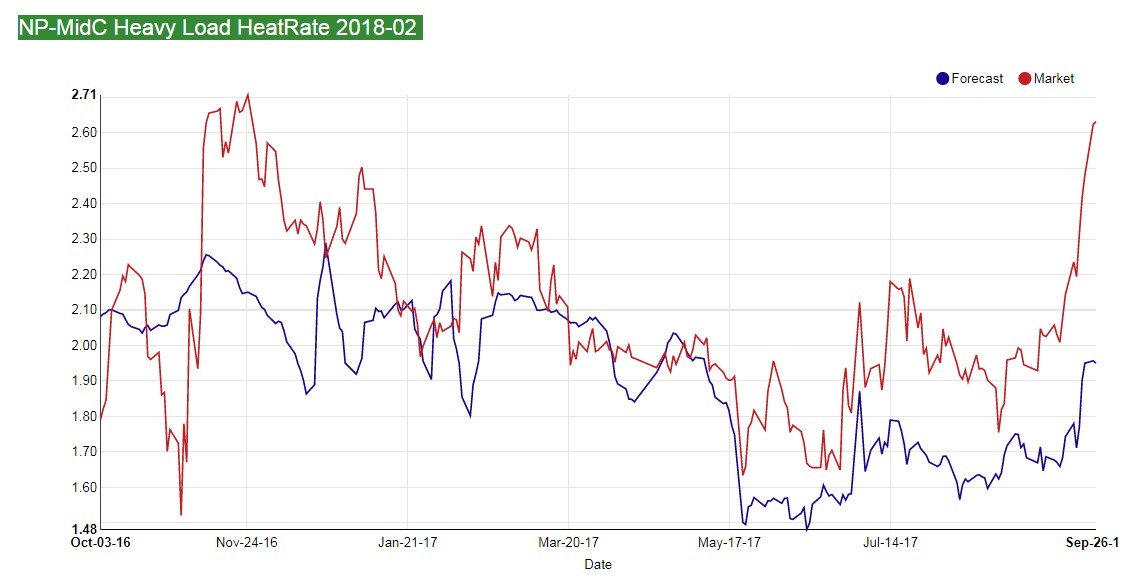 Oh dear, this one looks like one of Kim Jong-un’s rockets heading towards Guam. Short it, like you should short that lunatic dictator’s tenure as leader of NK. 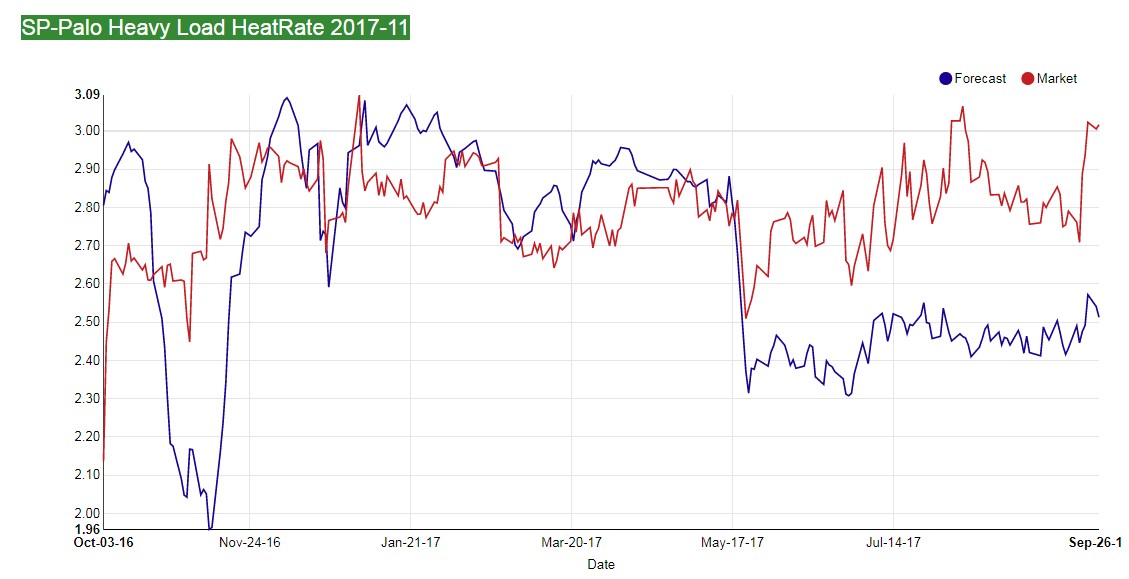 We mentioned the SP-Palo earlier, here is an opportunity to pick up a few nickles. A month ago, while SP cash soared, the spread blew out; then the market scratched itself between the legs and said: “why’d we do that?”. Now, in just a couple of days, the spread has blown back out because LA will be 95 and Phoenix just a paltry … 95. But wait, next week LA will be the mid-70s and Phoenix 105. Fade Mr. Market; he is confused.

This last trade was pulled from the junk pile of opportunities that have sailed away. These are the would’ve, could’ve, should’ve … DIDNT trades. We find these by sorting on WOW, ascending: 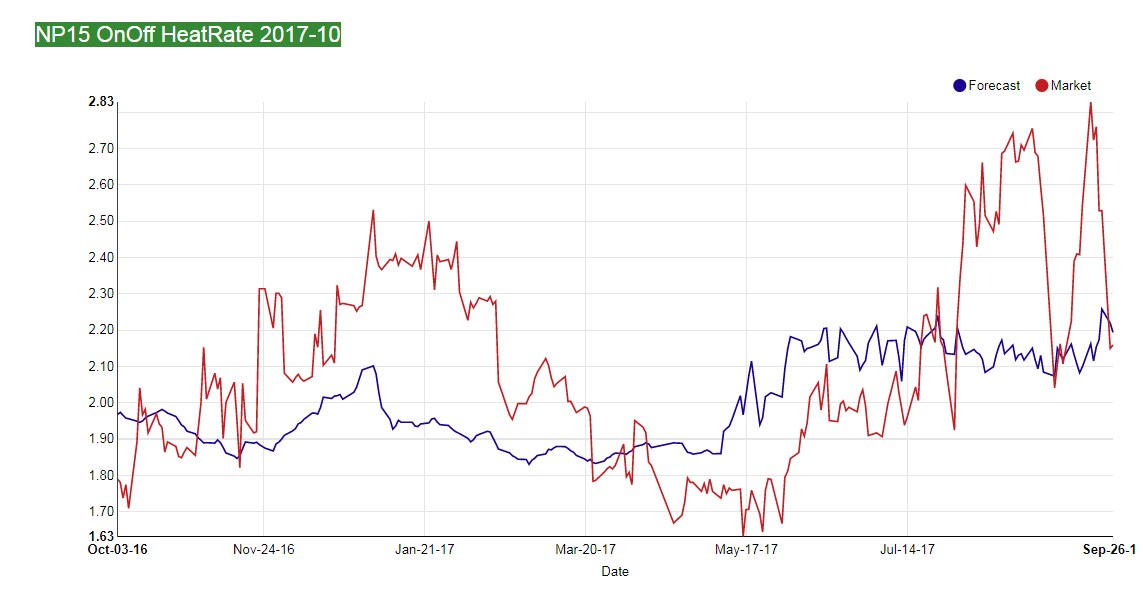 The market can’t make up its mind, reminds us of the daisy game … “she loves me, she loves me not, she loves ….” The last petal pulled was a Hate petal. Now we like it again. 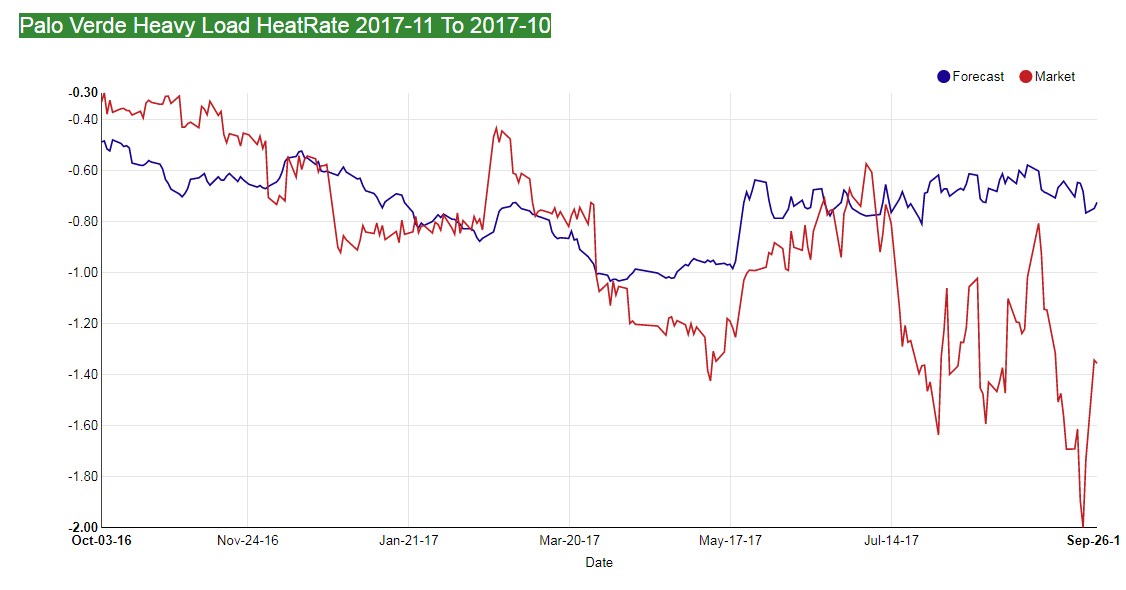 This trade was ranked #1 a week ago, now its mired in the middle because Mr. Market said whoops. Atta boy, Mr. Market, we appreciate your ability to reverse your blunders.