Mid-C showed a modest increase yesterday as loads peaked at 1,600 MW above last week’s high, and roughly 500 MW higher than the day before.  The daily average pushed 1,700 MW north of the two-week average as well.

Loads have been relatively steady in PV, at least compared to the previous hubs.  Demand came off 192 MW yesterday from Monday, and peaked at 500 MW higher year-on-year.  Yesterday also saw the daily average finish 750 MW higher than the two-week average. 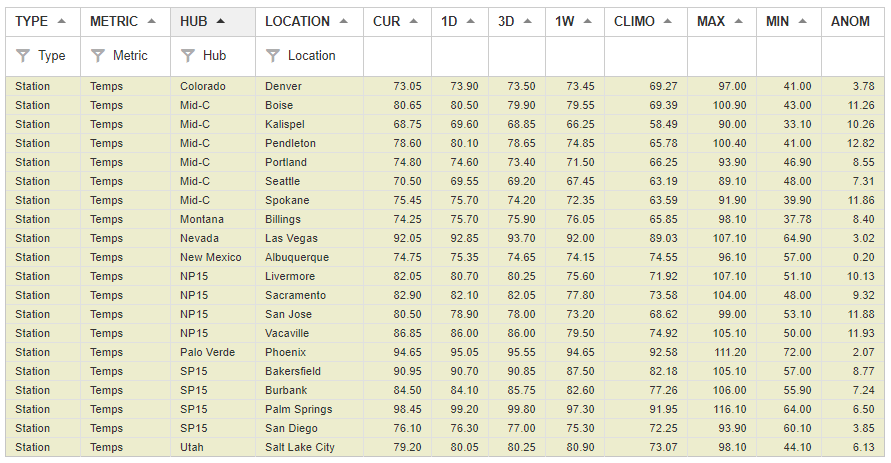 As the summary suggest, summer isn’t ready to begin waning in the West as every selected station is forecasting above normal average temperatures over the next ten days.  Mid-C and NP-15 lead the way as several stations push 10+ degrees above normal.

Brace yourself if you’re in San Jose as September is set to introduce itself with triple-digit highs on consecutive days.  The 1st could reach 101, 19 degrees above normal, while the 2nd will cool off just a degree to peak at 100.  From there, a very gradual cool off should follow, eventually leading to normal temps by the 8th, but until then, expect steady highs in the 90s.

Sacramento’s forecast is still holding well above normal, though the front end was adjusted one or two degrees warmer.  Ultimately this equates to a high of 107 on the 1st, 17 degrees above normal, and 6 degrees above the previous 10-year high.  Daily highs should stay in the upper half of the 90s until potentially the 9th of September.

Not all weather centers are on board with this projection, but for those that are, look out for a fairly large momentous in Phoenix weather beginning late next week as daily highs could potentially fall 10 degrees, and land back into the 90s.

Mid-C will get its share of hot weather beginning tomorrow (at least for Portland), and eventually leading to a high of 96 by the 2nd (18 degrees above normal).  With highs adjusted up several degrees for the 4th, we could see five consecutive days with highs in the 90s.

Seattle isn’t likely to reach 90, but the current forecast calls for a significant bump over the next week, particularly on the 4th as it was increased 6 degrees from yesterday’s forecast.  Highs are expected to stay above normal until the 10th of September.

The other side of the Rockies looks a bit more isolated from the warm front, though highs could still jump ten degrees above normal by the 3rd.  While the normal high begins a sharp drop (falling six degrees over the next three weeks), a trend line of the forecasted highs is likely to follow a similar path.

STP’s sharp increases to the back end of August are reflected in the 10-Day forecast as well, though by September that all but disappears.  September also marks the beginning of small, but steady increases.  The 2nd calls for 7,921 aMW and should grow to 8,408 by the 7th.

Total ISO gas outages increased roughly 900 MW over the past week bringing up the total to 3,134 MW.  Hydro added another 300 MW of outages during the same span of time while wind managed to halve its outages and drop to 212 MW. 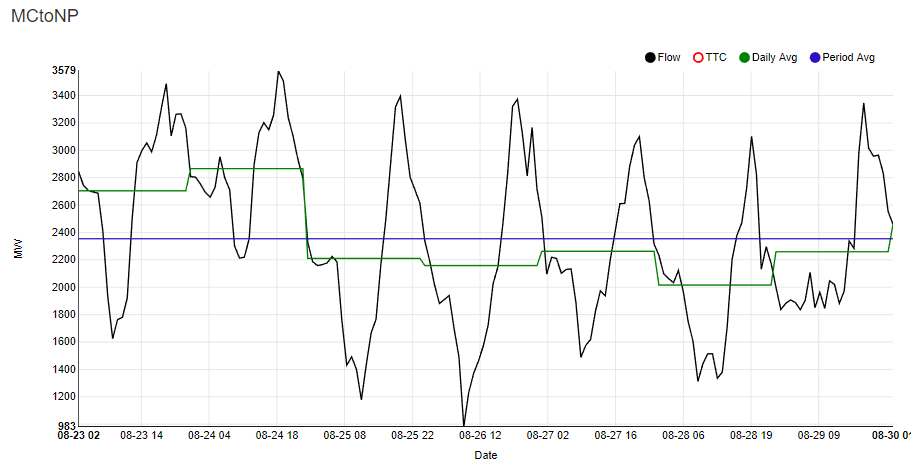 MC-NP average daily flows have hovered between 2,000 – 2,300 MW for the past five days since coming off from 2,866 MW last Thursday.  With hourly flows failing to fall below 1,800 MW yesterday coupled with a high of 3,346 MW, the average daily flow managed to increase more than 200 MW overall. 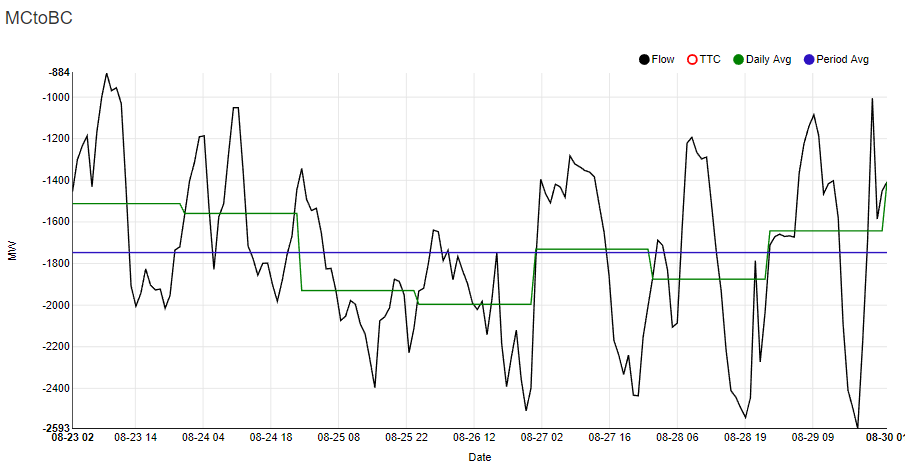