Ansergy tries to update its load growth at least once a quarter. This used to be an annual task, back when the sole source of WECC actual loads came from the FERC 714, but thanks to the EIA’s Open Data initiative one can now update load growth as frequently as you desire.

We were talking with a potential client in Houston who told us that all WECC utilities were in demand death spirals; all were losing load to distributed generation, energy efficiency, and the ute’s ridiculously high retail rates. That caught me by surprise, I never realized load decay was taking place across all WECC utes, and after running our own research I still don’t realize that “fact”. 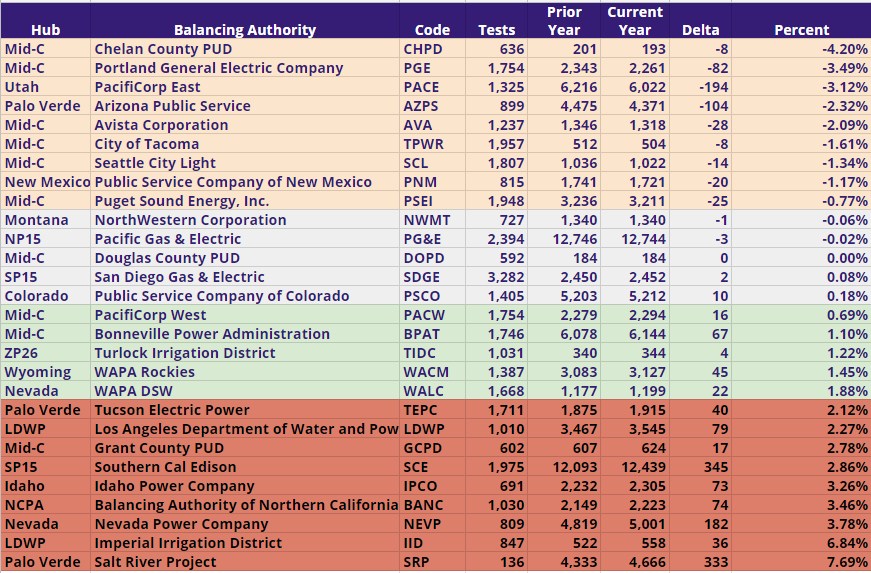 Statistics never lie, statisticians often do. There are many ways to compute load growth, the Ansergy method deploys the following :

The potential client was right, some Utes are experiencing load decay, but most of those are in the Northwest. Chelan PUD matched temperatures on 636 hours and averaged 4.2% lower loads in the “current” year versus the prior. Portland General was nearly as bad, their decay averaged 3.5% across 1754 tests. Pac East and APS have realized the sharpest declines in non-MidC BAs, with 3.1% and 2.3%, respectively.

Five BAs effectively had no changes in loads while the rest have all experienced “load growth”. The three leading in that group are Salt River (+7.7%), IID (+6.8%), and Nevada Power (+3.8%). All three reside in the Desert Southwest and might explain some of those wild June and July Palo  prices we realized this year.

Drop us a note if you’d like to get a copy of the study.