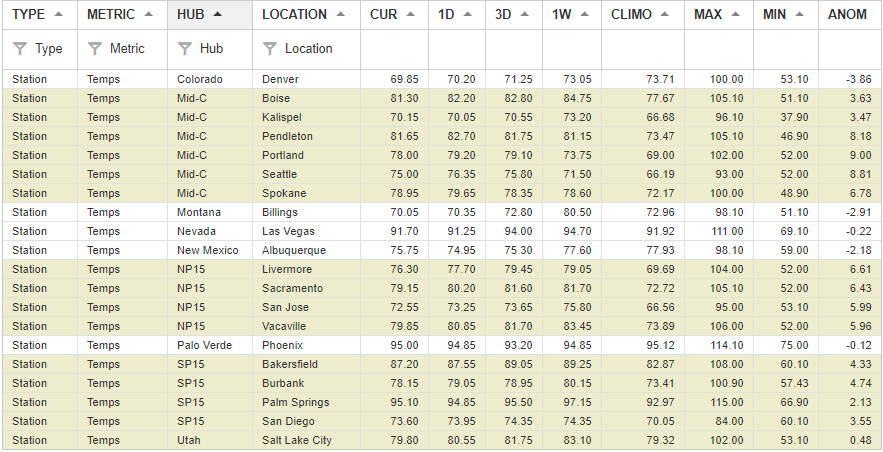 No surprise, but Mid-C stands out with the hottest average temperature forecast for the next ten days, led primarily by Portland, Seattle, and Spokane.  NP-15 isn’t far behind however, as each of the four stations pushes 6+ degree anomalies.  Interior Rockies and Phoenix show up as the only stations with cooler than normal weather.

Seattle’s forecast is holding steady through the weekend, but now shows an uptick beginning on Monday with an increase of four degrees, and Tuesday’s jump from 85 to 88.  Today is still on pace to top out at 93, 16 degrees above normal.

Portland should also get the second mini heat wave, though it will start on the 6th unlike Seattle’s.  Temps will peak at 97 on both the 6th and 7th, the latter coming in at 9 degrees above yesterday’s forecasted high.  Today’s max temp of 107 is 27 degrees above normal, 17 above the 10-year high, and 8 degrees above the all-time high for August 3rd (99).

Spokane’s forecast will top out at 99 today, one degree higher than yesterday’s forecast.  It also saw a reduction for the fifth and 6th (four and three degrees respectively), followed by an increase on the 7th and 8th before culminating at 98 degrees on the 11th.

Also worth noting the beginning of decreasing average temps.  Today’s normal high is 87, but that will drop to 82 by the 24th.

Three degrees cooler for San Jose’s high today, but still on pace to reach 92 tomorrow — 10 degrees above normal.  Things cool off rapidly thereafter, dropping to normal by the 6th, and a couple degrees cooler on the 7th and 8th.  There is potential for another 90 degree day on the 13th.

Sacramento will stay above normal through mid-August for all but two days.  Tomorrow’s high of 99 comes in at seven degrees above normal, and will be the highest point until a forecasted 101 on the 13th.  In a change from yesterday, the 8th should reach 97, four degrees higher than forecasted yesterday.

Burbank looks like it will stave off a potential cool down that was expected on the 10th as the forecast again climbs above normal before rocketing to 97 by the 14th.  No changes expected to the forecast through the weekend as tomorrow tops out at 96 — 8 degrees above normal.

Phoenix looks to continue its cooling trend with below-normal highs through the 7th.  From there the forecast calls for erratic weather with daily highs bouncing from 100 to 110.  As an aggregate, August is pacing to be cooler than normal.

Speaking of cooling trend, Denver is set to reach just 72 degrees today, 17 degrees below normal.  Daily highs aren’t expected to reach above average until the 14th as temps stay mostly in the 80s.

Demand peaked at 26,372 MW yesterday as temps soared throughout the hub.  With yesterday’s high, the day finished up 1,964 MW week-on-week, and up 4,080 MW year-on-year.  Demand has grown each of the last five days, and with temps expected even higher today, that number should reach 6.

SP-15 saw load rise through the week as well, but that growth stopped yesterday as demand fell 300 MW short of the 1st.  Demand remains elevated over last week however, as loads finished up 1,193 MW.

The STP and 10-Day forecast calls for steady aMW through the weekend before again seeing a steady decrease through the remainder of the 10 days.  The forecast tops out at 12,353 aMW tomorrow. 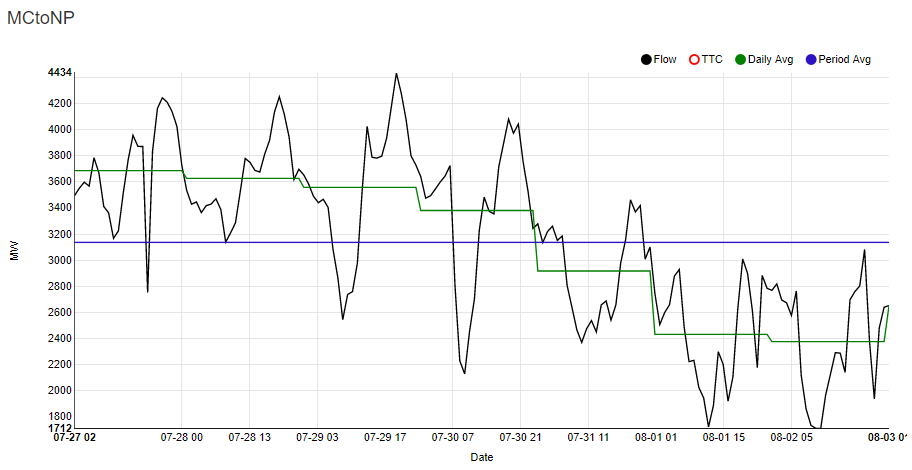 Yesterday marked the sixth consecutive day of decreased flows as the daily average finished at 2,377 MW, down from 3,686 MW a week before.  Flow dipped down as low as 1,712 MW late yesterday morning. 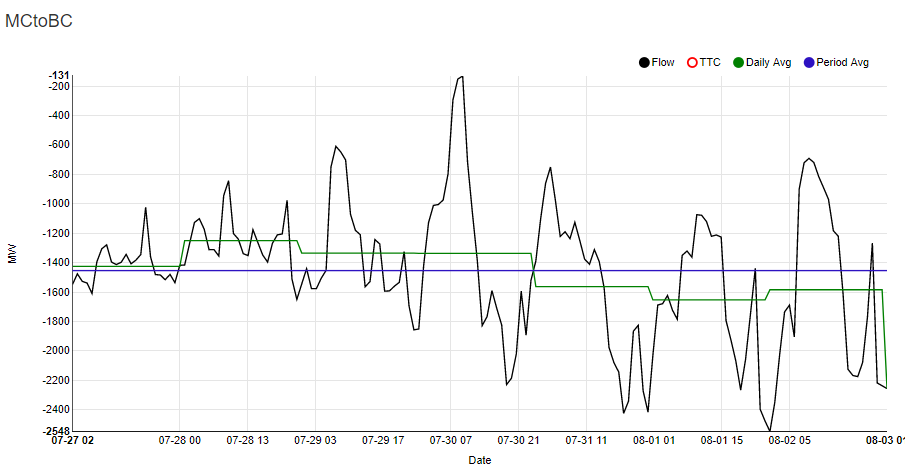 On the other side of Mid-C, flows are holding relatively steady at -1,584 MW, slightly up from yesterday’s -1,653 MW daily average.  Despite the sustained heavy average imports, flow showed a spike of -691 MW at 9AM.