We said it before, it’s about heat in the summer, but maybe we over-simplified things, it’s also about outages, hydro. renewables … all of which are in today’s post. Let’s start with heat.

Not the heat going forward, the heat we’ve realized. Check out the anomalies at the top; both the NP and MidC are off the charts for the first week of August. Each set ten-year highs, and there is more to come.

The Northwest will be way above average all of this week. I believe it was seven days ago that I suggested watch out for high-pressure systems, they often tend to build and linger; this one has remained, if not built. Stay the NW heat did, like adding another ten days to the warm anomaly. All we can say, in a word, is bullish, especially when we take into account the ever-tightening northwest hydro outlook (see below).

California is not to be outshone by the NW, the Golden State is warm, too. But alas, not hot, at least not in the LA basin; Burbank barely musters up to Portland levels, though the interior of the state is hot.

The interior is a study in contrasts; Phoenix and Vegas are scorching hot while Denver is in the 60s. All of the US interior is cold which is why the West is hot; the yin and yang of weather. Palo should have a robust week, unlike the past two, given the hub approaches 110 and all of the rest of the coast is warm. We’d be biased towards a strong week of cash if it wasn’t for the miserly Nymex gas markets, which were crushed. 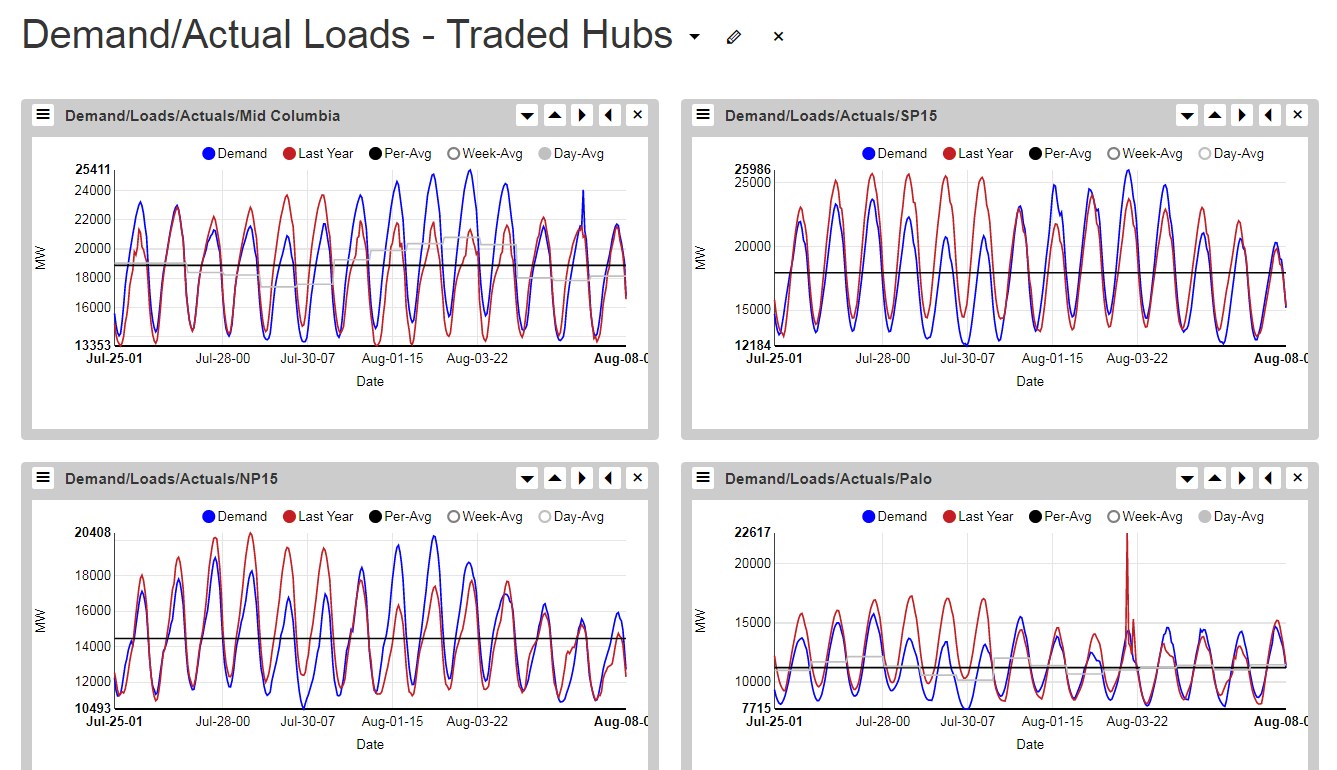 Loads are off, week-on-week; no surprise there, so are temperatures:

The ISO is about normal, though the desert interior is hot, and the northwest is warm. All in all, we like the ten-day outlook for length, but everything is relative, and one would need to look at the other fundies, then look at relative market prices, before drawing any execution decisions. We plan on doing all of the above, read on.

There hasn’t been a lot of news on the Gen front this summer, but today is the exception:

ISO outages (gas) have soared, here are the details: 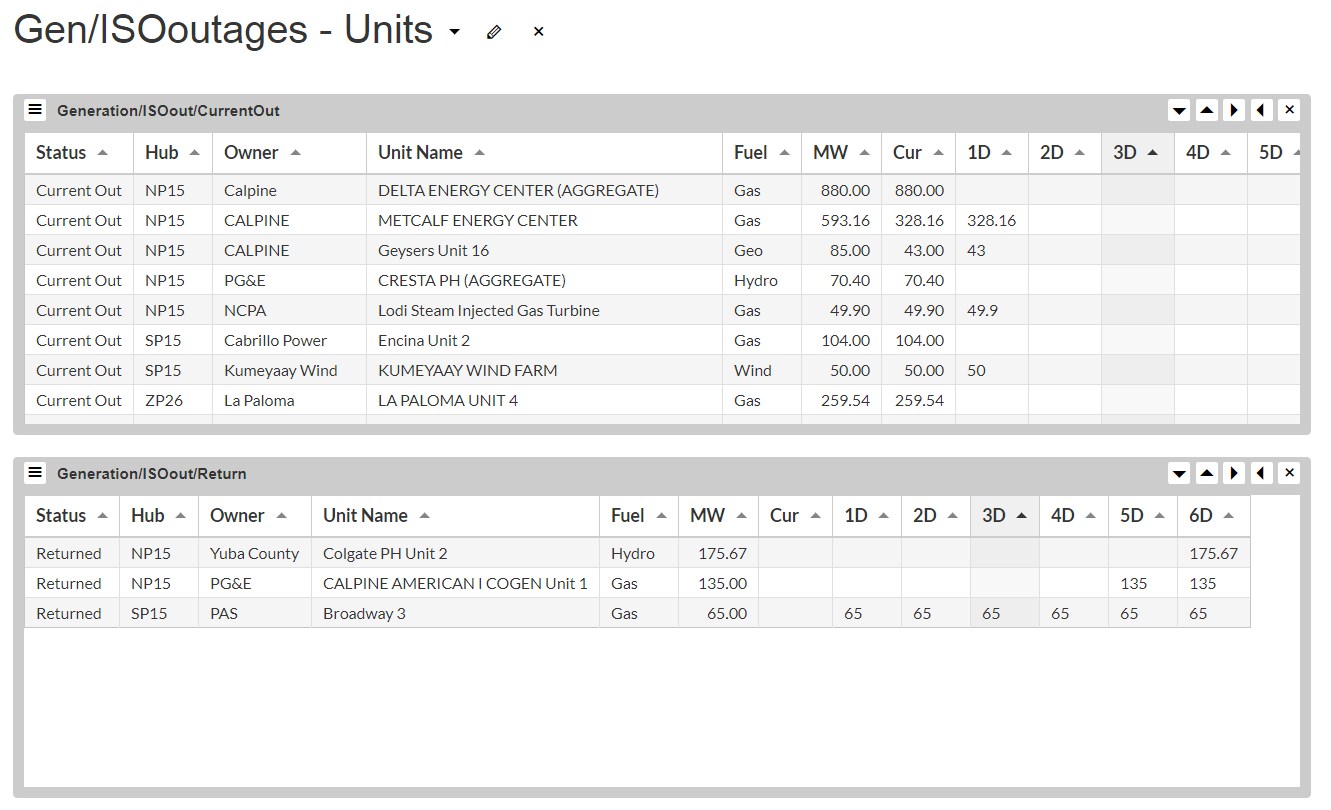 This is a new dashboard that displays the new outages in the top frame and the returned units below. Of course, all of a stack’s gas needs to be running, at least for those new outage heat rates, for any of this to matter, and we see a lot of idle gas in the ISO: 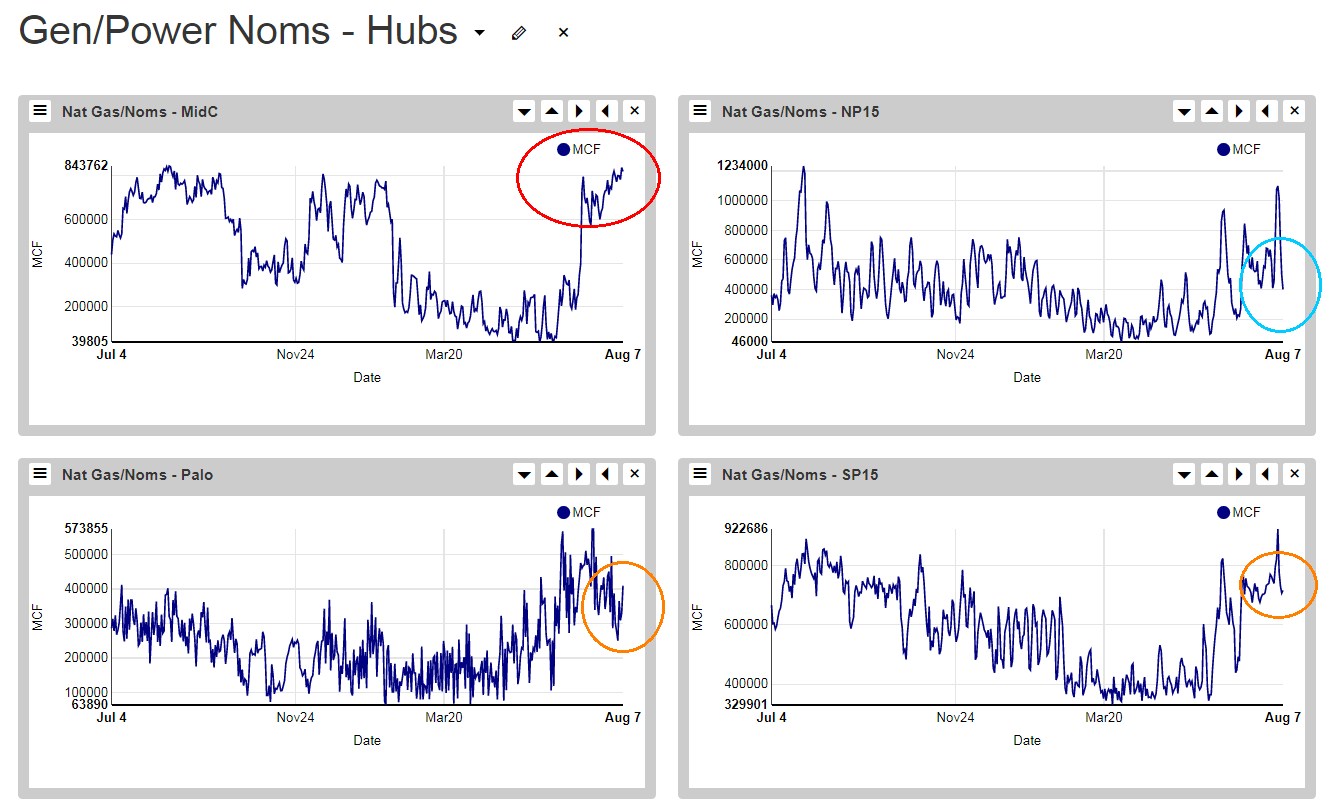 NP noms have tanked over the weekend, but the lingering heat will push those back to summer highs. MidC has issued an “all hands on deck” call; there isn’t much idle capacity in the great Northwest. 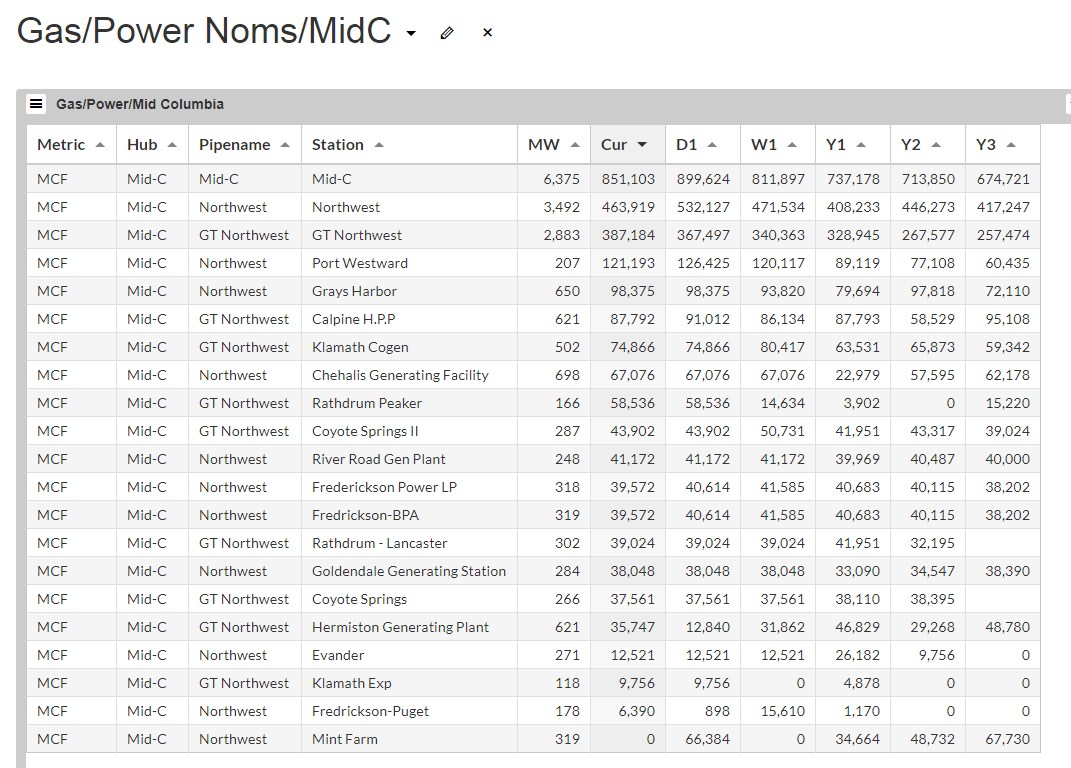 If it weren’t for our friends up North, BPA would have to cut flows to our friends down South, and we might finally get some fireworks, but we don’t see any friends getting cut. The Northwest can hit its reservoirs harder than it currently is, BPA would rather not, but can if needed. Weather isn’t hot enough to push panic buttons, but the markets will remain tight, just not stupid high.

Palo noms have soared of late and are setting three-year highs for August. 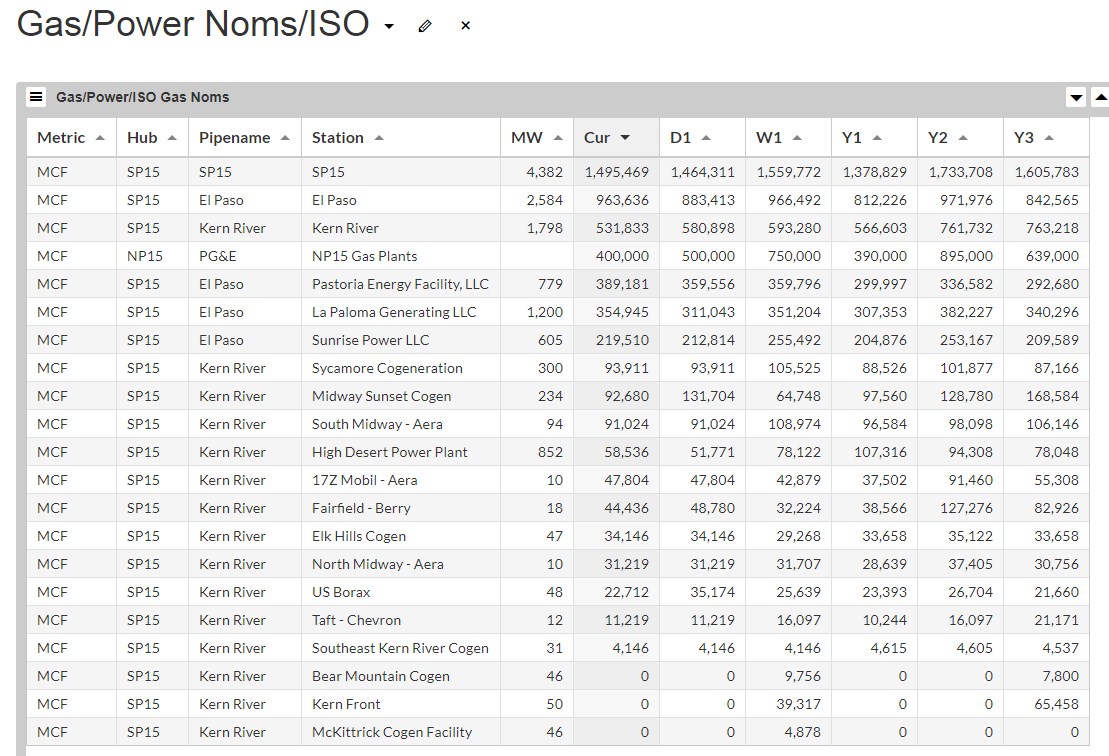 The ISO has plenty of idle capacity, much of that will be used up as temperatures move up. Still, the SysOp cannot seem to shed its WY17 hangover; hydro energy remains a constant drag on upside potential:

On Peak energy (hydro) remains at record levels and shows no sign of abating, in fact, it has rallied over the last couple of weeks. Off Peak, on the other hand, has fallen every day since peaking in June, all of which suggests water is tightening. 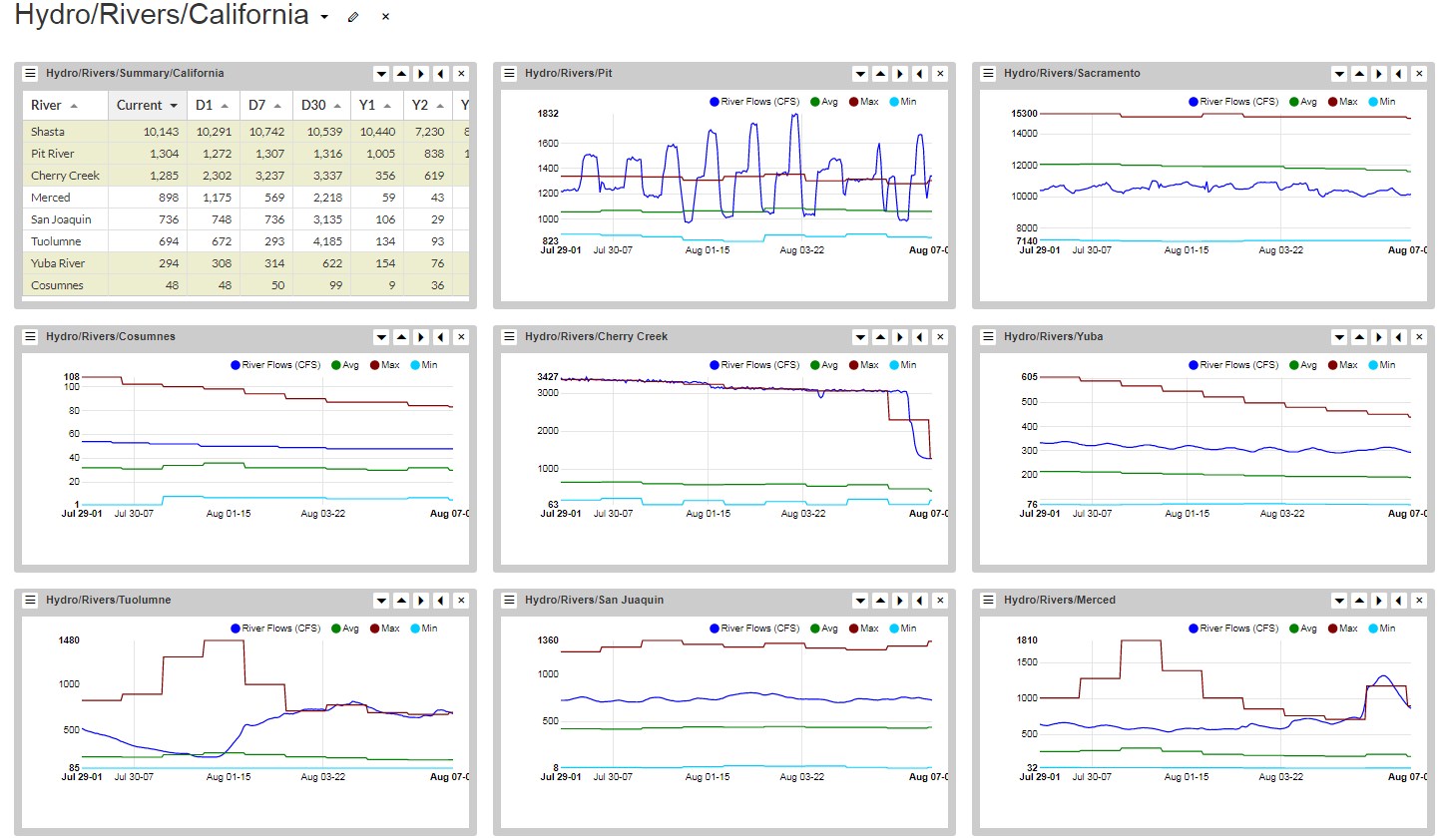 That fact is further demonstrated in the above plots. Most are above normal, a few are setting August records, but the absolute levels are not what we find most relevant. The fact that every station is now shaping its water (aside from the Cherry Creek complex) tells us that WY17 is winding down, but not before it leaves a reservoir legacy that will take another year to work off: 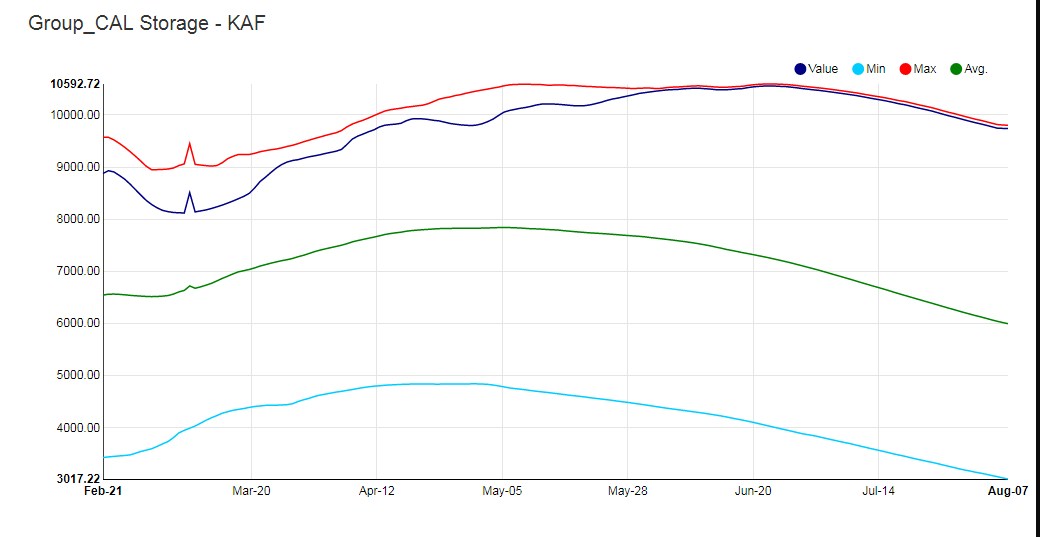 The state is about four maf higher today than average and nearly seven maf greater than the low, which was the norm for the last three years. Inflows are backing off which is allowing the state to shape into on peak hours but the legacy of WY17 will be with the market well into next year. Call it bearish. 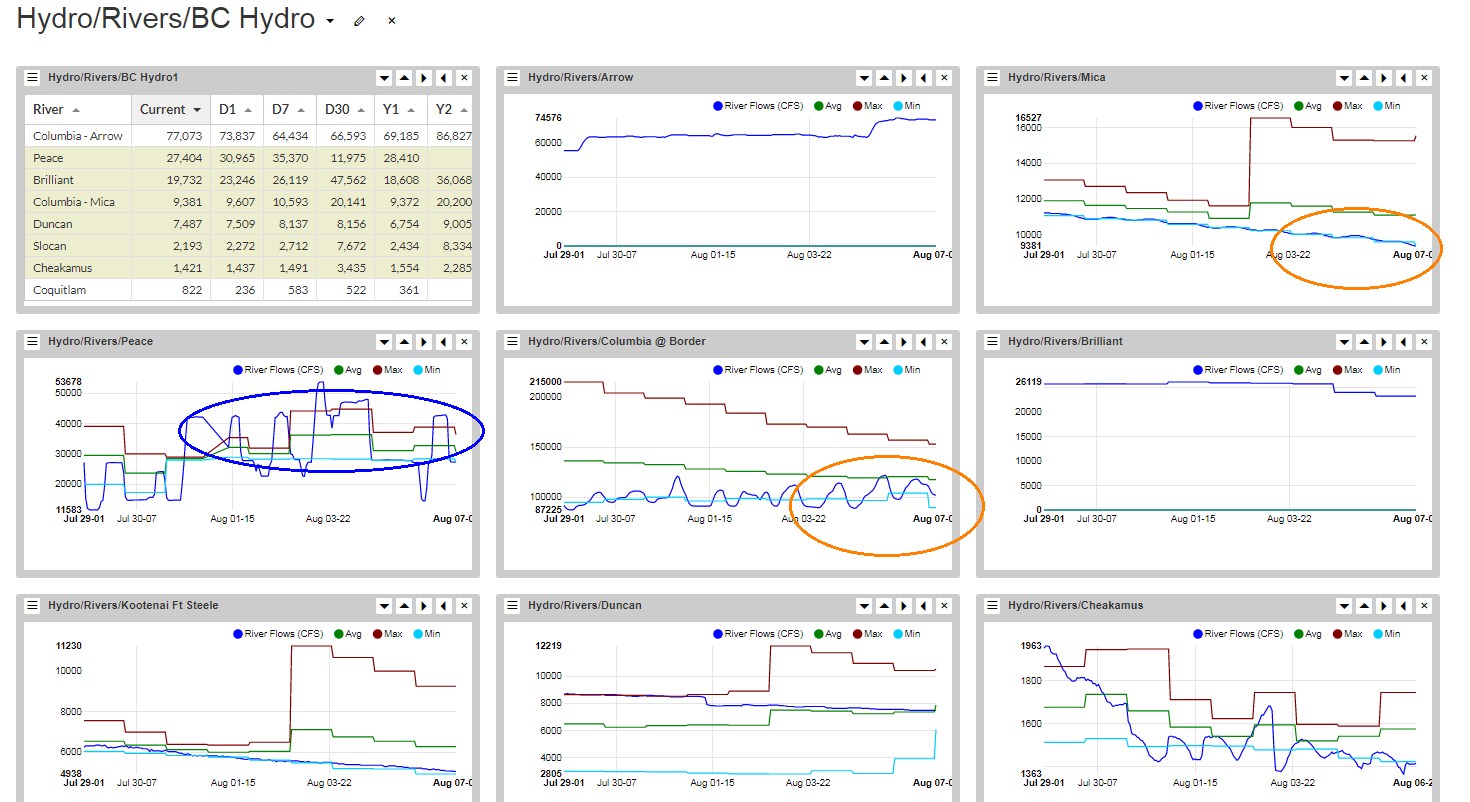 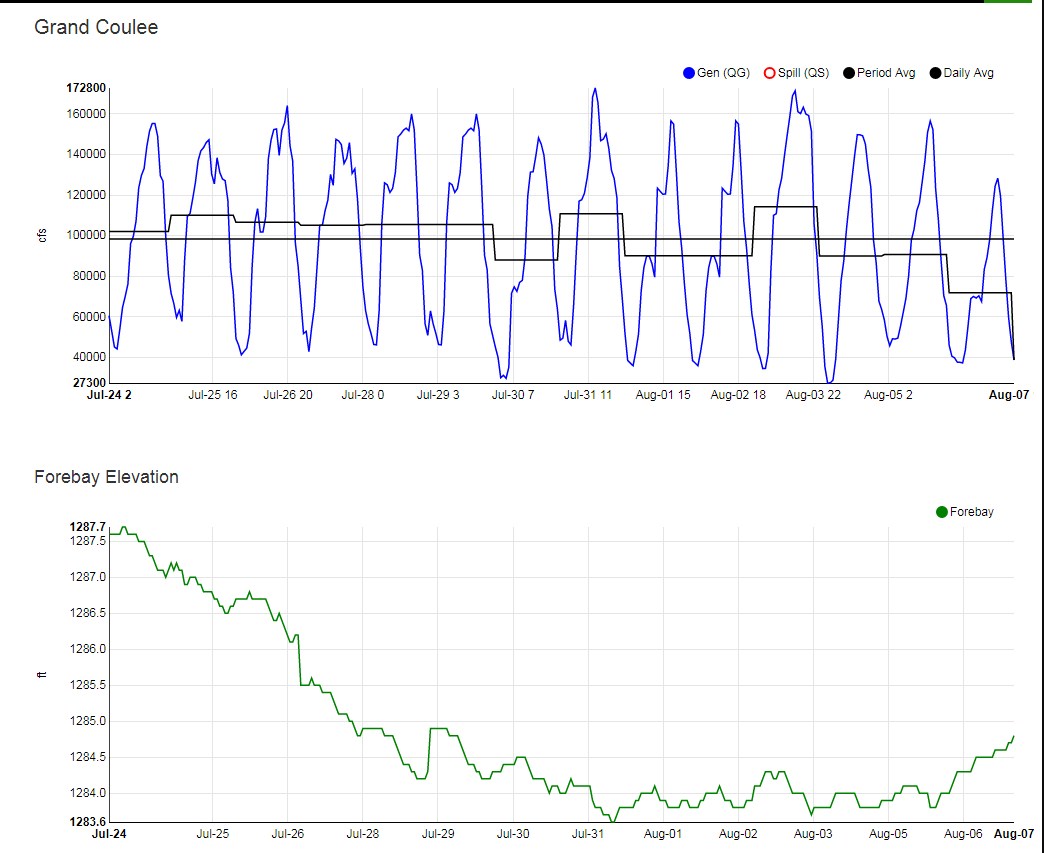 Coulee generation hit a ten month low yesterday, though some of that can be explained by the rise in the reservoir. The telling point here is that BPA filled Coulee yesterday. The feds are concerned about this lingering heat. They are even drafting Hungry Horse to supplement the Clark Fork|Pend Oreille.

No need to hit the panic buttons, reservoir levels are not anomalous, they are all about normal: 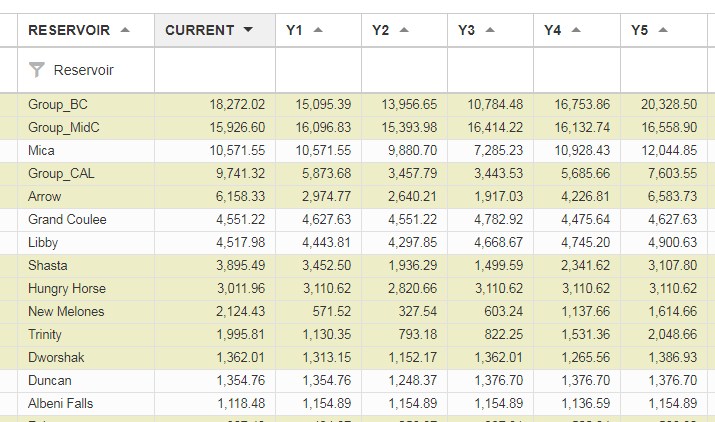 BCH has many bullets in their robust system, so is California. 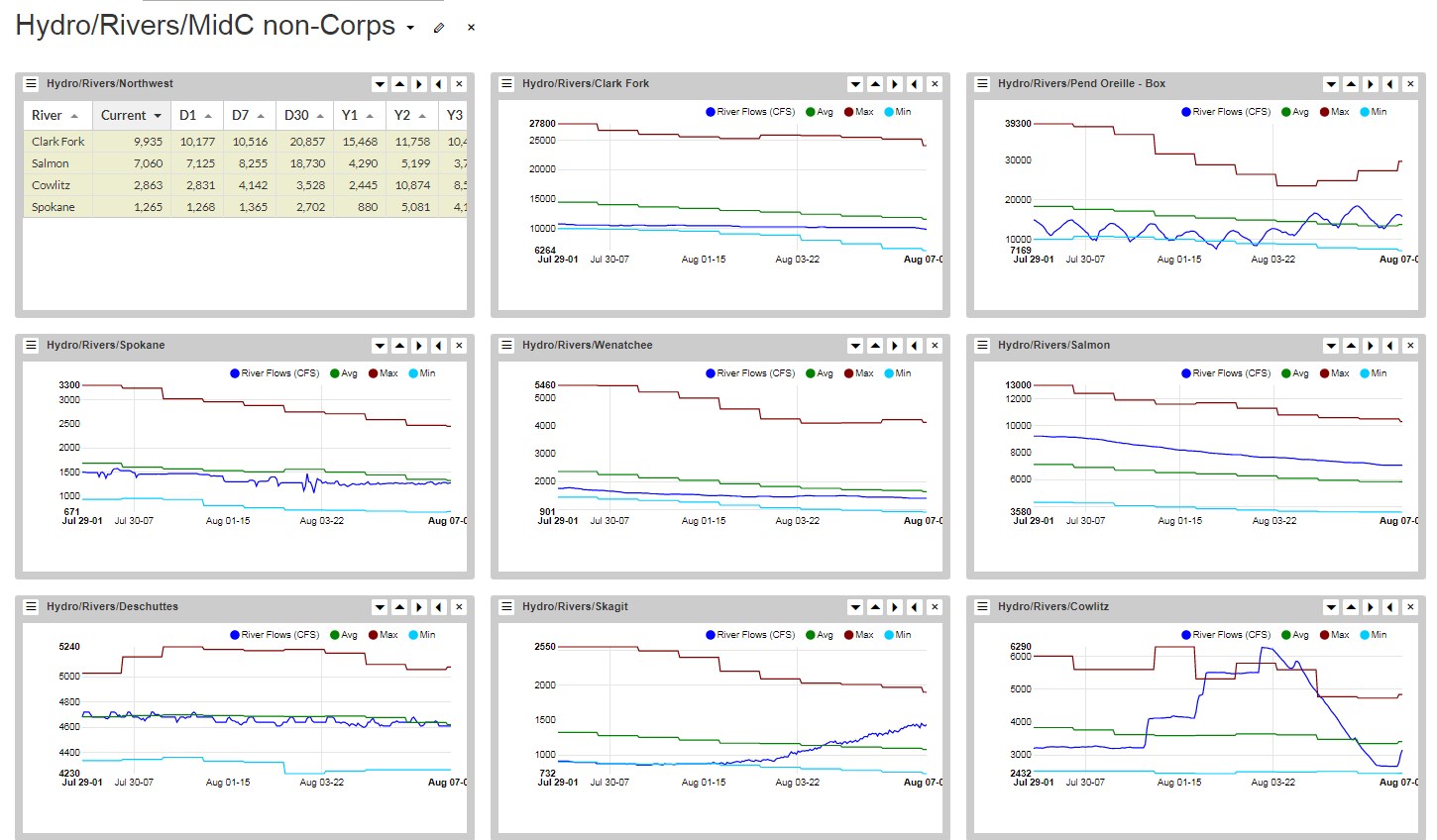 The recent surge on the Pend Oreille is most likely from the Horse draft, the rest of the rivers are slogging near five-year lows. 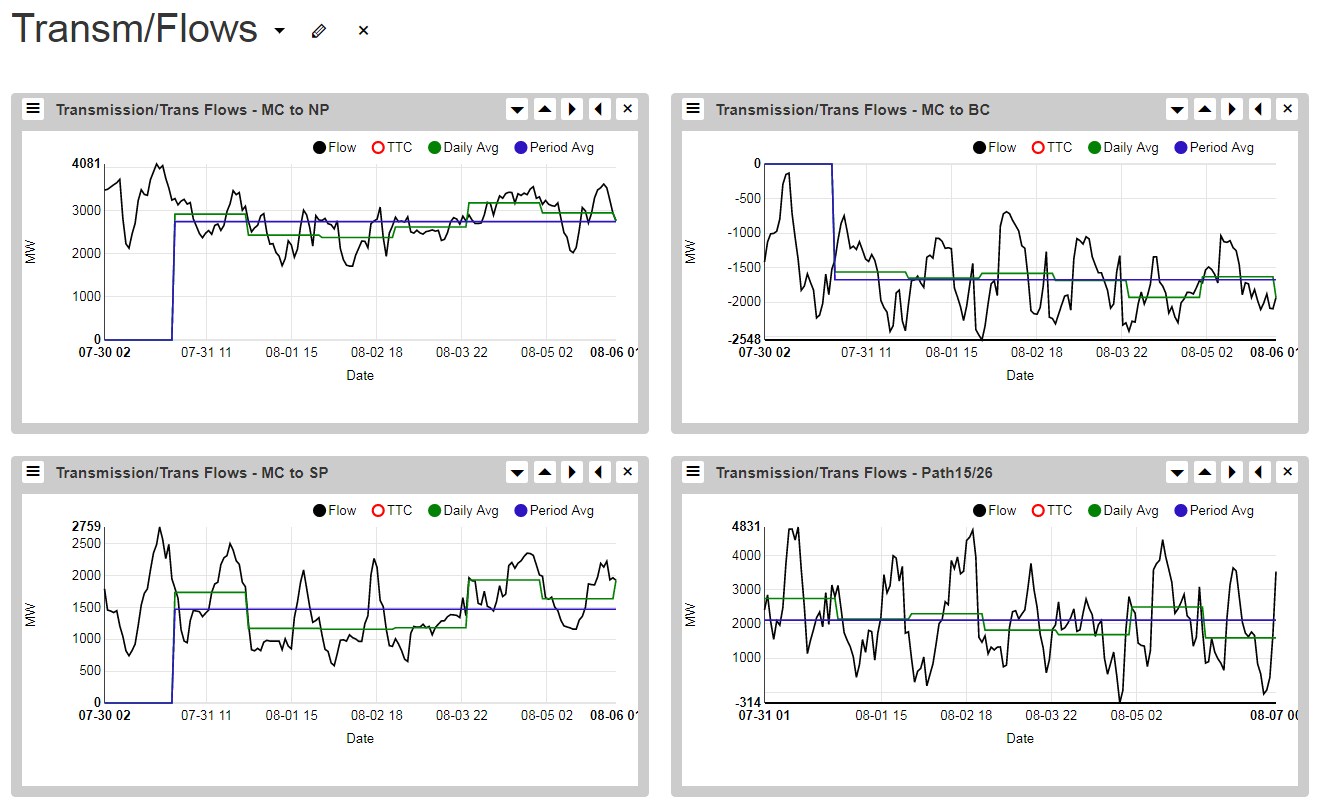 Not a lot to say here. The Northwest is selling to California; the Canadians are selling to the Yanks. Don’t see that changing anytime soon.