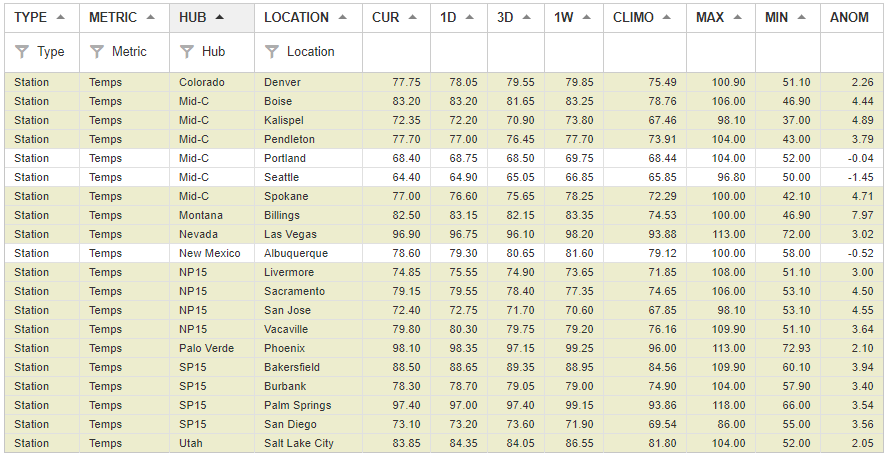 Mostly hot across the West, at least in terms of average daily temperature.  Seattle has the coolest anomaly by far, while Portland is essentially forecasting normal — though that’s low enough to stand out against the rest of the stations.

Burbank’s forecast for the 16th was increased four degrees over yesterday, and now sits at 94 degrees — seven degrees above normal.  From there, the area should get a moderate cool off, eventually leading to a week of below-normal daily highs.

Phoenix will get the same cooling pattern beginning on July 21st, and could drop to a frigid 102 by the 22nd.  There haven’t been many days below normal this summer; four degrees below normal will be the lowest in weeks.

A couple changes to the overnight forecast for San Jose.  The warm up expected at the end of the week looks a few degrees cooler, and will begin two days later.  The 17th was forecasted at 77 as of yesterday, but is now predicted at 84, essentially wiping out any chance of below-normal temps.

Sacramento could set a new 10-year high on the 15th and 16th as it’s forecasting triple digits once again, and a peak of 102 on the 16th (10 degrees above normal).  Today marks the last day of below-normal temps until July 24th, if the forecast holds true.

Portland has had a much warmer than normal summer thus far, and while the current forecast is still north of the red line, we aren’t seeing any 90+ degree days in the future.  July could potentially see its peak at 87 on the 16th.

Seattle on the other hand is squarely below normal for the next week with a minimum daily high at 71 on the 16th (five degrees below normal).  The next week also marks a change from yesterday’s forecast which called for temps up to 10 degrees warmer.

Denver will move from five degrees below normal on the 13th (at 85) to 11 degrees above normal on the 17th (at 101), which could potentially set a new 10-year high as well.  The rest of the month looks to straddle the normal line, alternating above and below by a couple degrees.

Grand Coulee increased two percentage points over the weekend and now sits at 97%, matching the previous max, and is a full point ahead of the average for July 10th.

In terms of forebay elevation, it equates to 1.5′ increase since the 8th and nearly a foot more than the average.

The NWRFC 10 Day Forecast is showing a drop from 18,236 aMW on the 11th to 15,723 aMW by the 19th.  In between those dates we see a couple noteworthy items as well.  The 13th marks the largest discrepancy with STP with a difference of 859 aMW, though that almost disappears entirely by the next day.  We also see another increase in aMW from the 14th moving into the 15th, albeit just 170 aMW.

With another 400 MW of gas outages returning, the increase in outages from last week have essentially been wiped out.  Hydro added 150 MW over the weekend however, though Solar, Bio, and Wind each had significant reductions in outages. 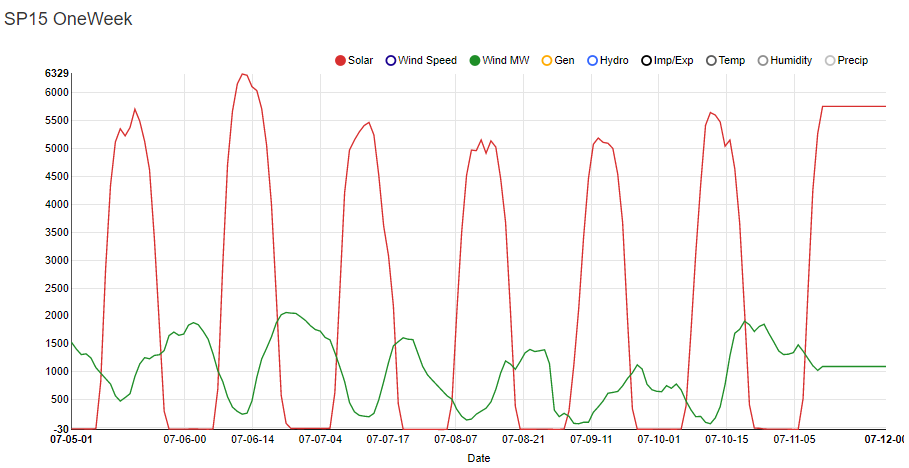 The Ansergy Realtime generation reports are a quick way to check on up to the hour results in any of our hubs.  SP-15 is off 689 MW of solar since its high of 6,329 MW last week (which coincided with a high of 2,063 MW of wind, easily making it the highest renewable day of the week). 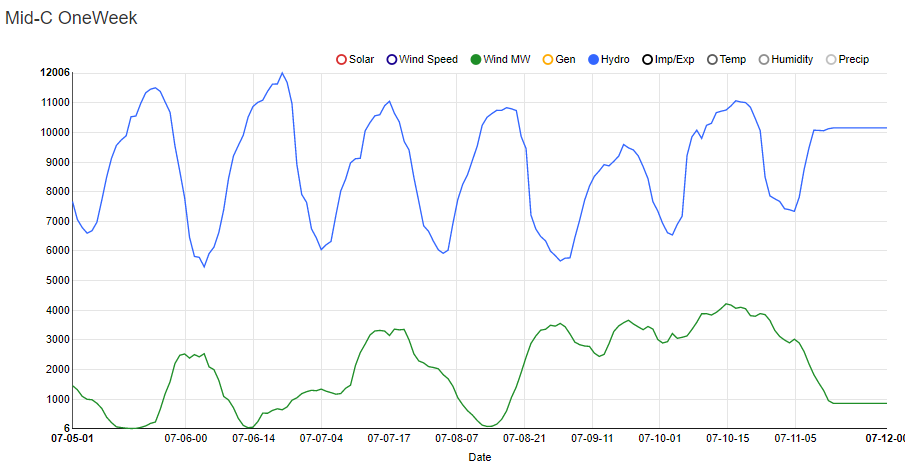 Mid-C wind had been generating steadily since late Saturday night until rapidly falling this morning.  Wind hit a high of 4,214 MW yesterday afternoon, but now is generating at just 854 MW. 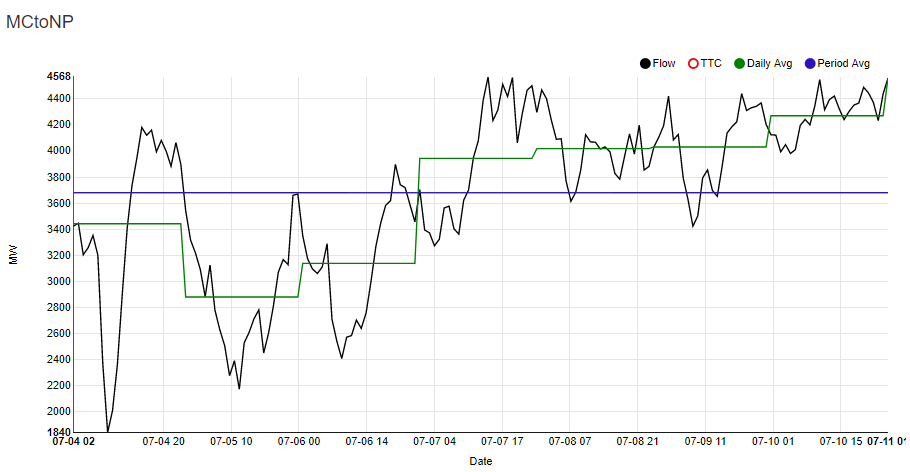 Flow has been steadily climbing higher since the 5th where the daily average was just 2,880, contrast that to 4,271 as of yesterday.  We haven’t seen a single hour dip below the weekly average since 9:00 AM Sunday. 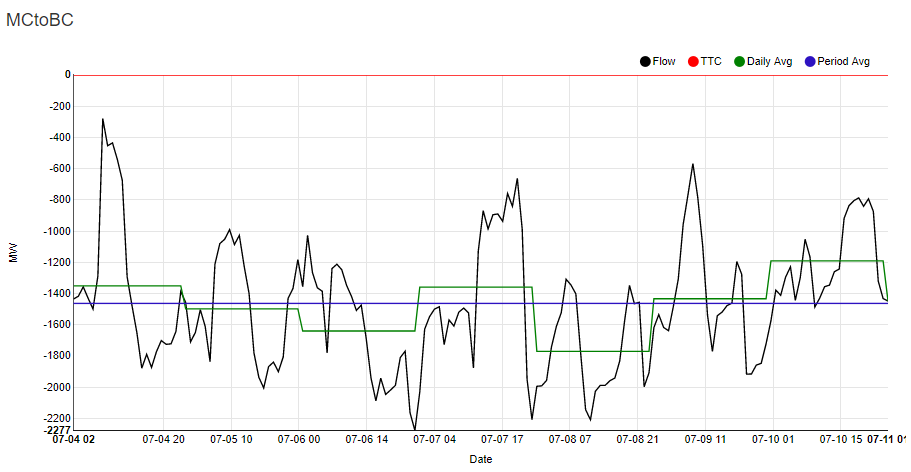 While MC is sending heavy MW into NP, it’s been importing from BC at elevated levels as well.  There have been some signs of it slowing down as of yesterday where the daily average rose from -1,433 MW to -1,191 MW, including an hourly high of -787 MW.