Lots of interesting nuggets in today’s fundies, let’s see if you concur. For starters, NP is settling materially higher prices than SP, and the BPAT node is severely congested.

We were somewhat surprised to see NP trade that much over SP as the latter’s loads were reasonable robust:

For that matter, all hubs were strong, all realized material week over week gains. Even the MidC saw a sharp rally which caught us by surprise since that load rally would have been AC driven. Let’s look closer at the Utes:

A third of the upswing came from Portland General which demonstrates how much AC load is now in the City of Roses. Contrast PGE’s deltas (week on week) with Puget or Tacoma, both of which saw drops. Interesting, huh? Maybe that can be explained by temperatures:

It was only 83 in Portland yesterday, Monday was hotter, but Seattle could only muster the mid-70s which wasn’t enough to get the tree-hugging city dwellers to turn on theirACs, ACs which don’t exist for most homes in Seattle proper. Now, where I live, in Bellevue, our AC is running on anything north of 68.

Forget the northwest, look at Palm Springs posting the 111s; you’d need a 5:00 AM tee time to get a round in on a day like that. Phoenix hit triple digits, but barely, yet that desert city has massive gas noms: 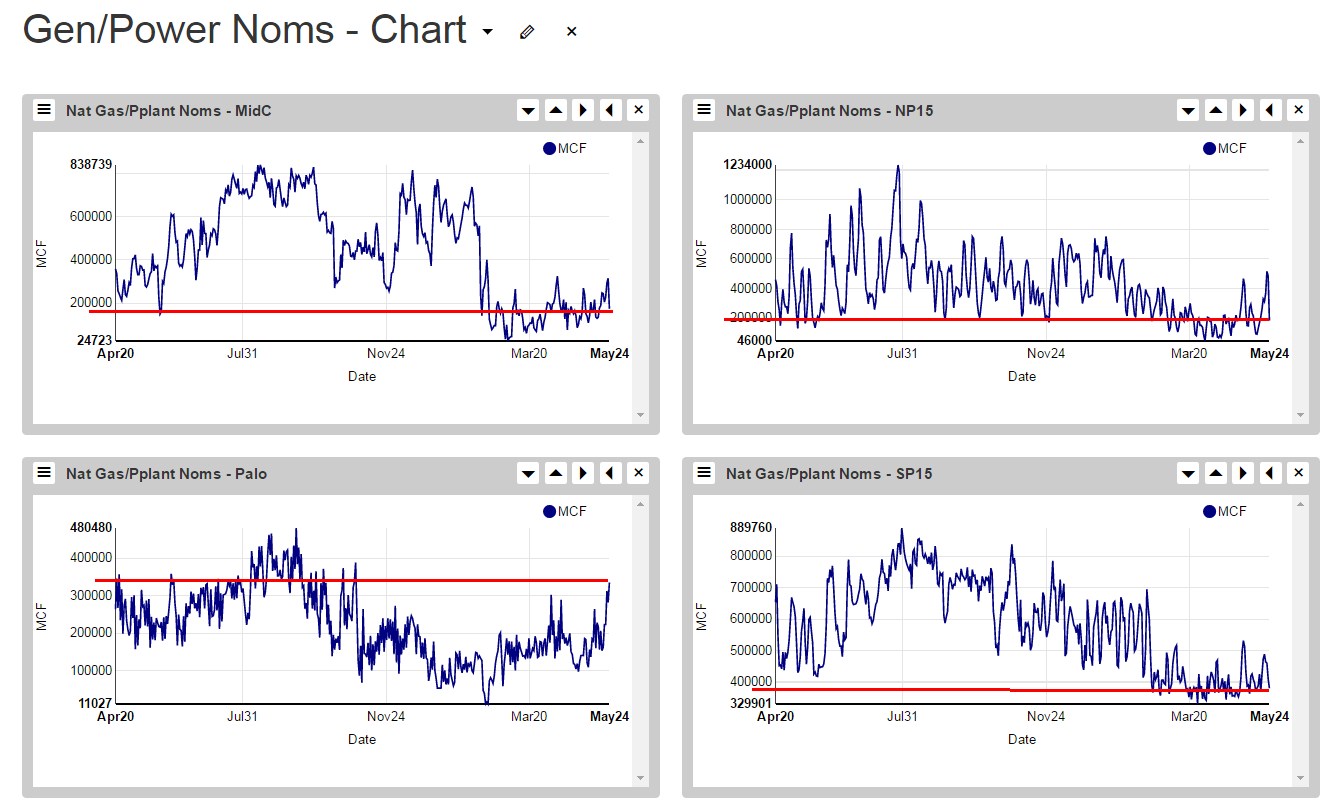 The hub is nominating over 300 MMCF which bested most summer days last year – wow! Is it going to get that hot?

Yep, 106 today and two weeks out the city gets even hotter, though that is too deep in the calendar to bank on, we’ll be keeping an eye on that week.

California will be hot today and then not hot for the remainder of the week. Next week is modestly warm, not hot.

The Northwest warranted lots of circles, all red, because next week is looking warm, even hot suggesting the snow depth will be tumbling away.  Given Portland’s load reaction to the heat, we’d expect Northwest loads to take a nice pop next week, at least the southern part of the hub.  At 81, even Seattle might fire up the air.

Our pals in Portland are growing increasingly bullish on June – they are cutting water from Monday’s STP and cutting, even more, water from Friday’s ten day. Interesting, because typically warm May weather would suggest surges in river flows, but ain’t seeing that:

The Side Flow Indexes are mostly “side” ways, except for the Middle Columbia index – that one is taking off and should set more records next week as the Cascades are still loaded with snow. But alas, most of that water will be spilled. The other indexes are not even near six year highs (Red line), most are just normal. Let’s look at some more northwest rivers: 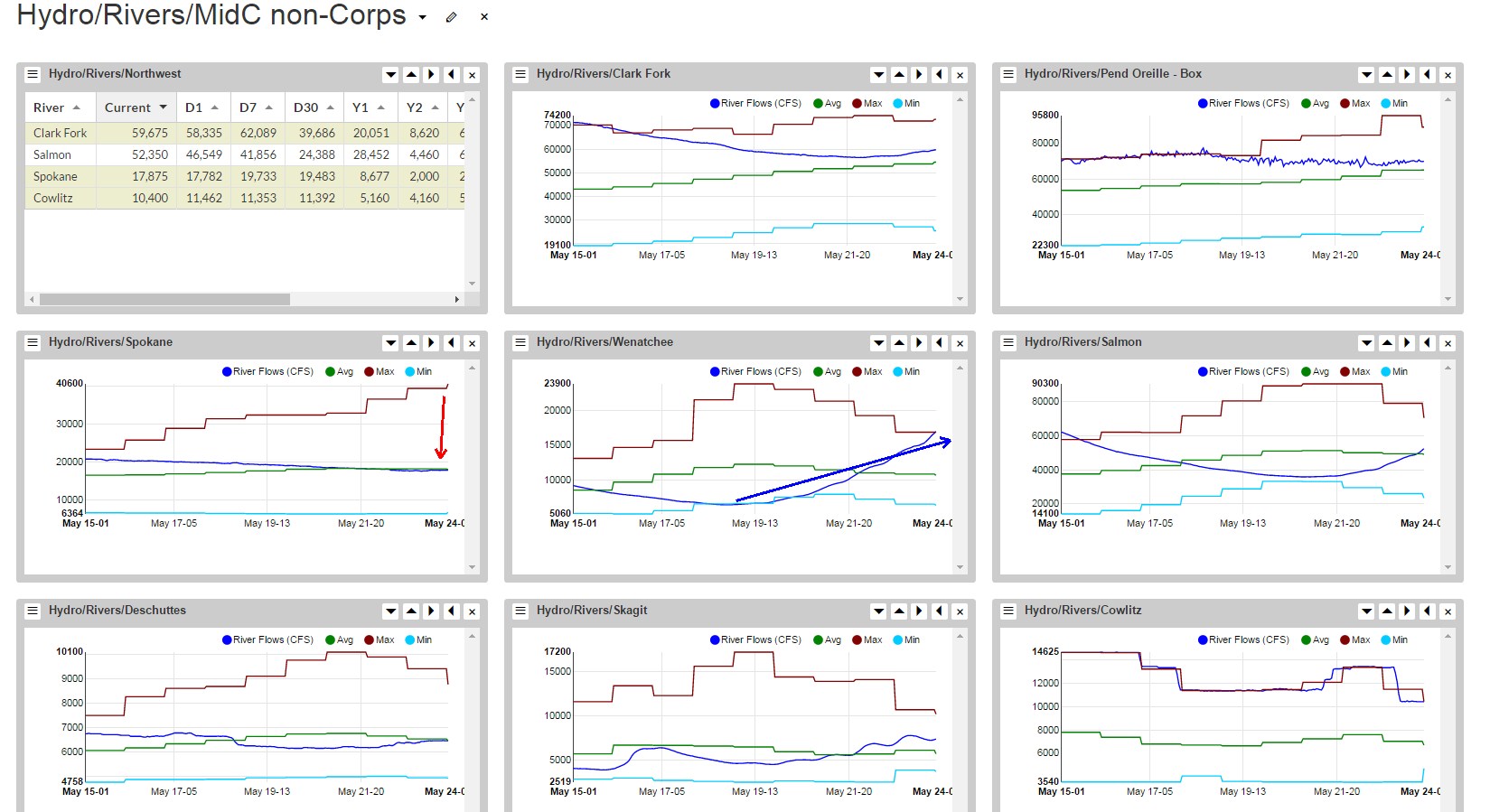 All of these rivers are well below their highs, most are just normal. The Spokane is a spent river and the Salmon is coming back to life, next week it will post its final hurrah. Strange, this was supposed to be a monster water year, at least that is what the NWRFC’s water supply suggests: 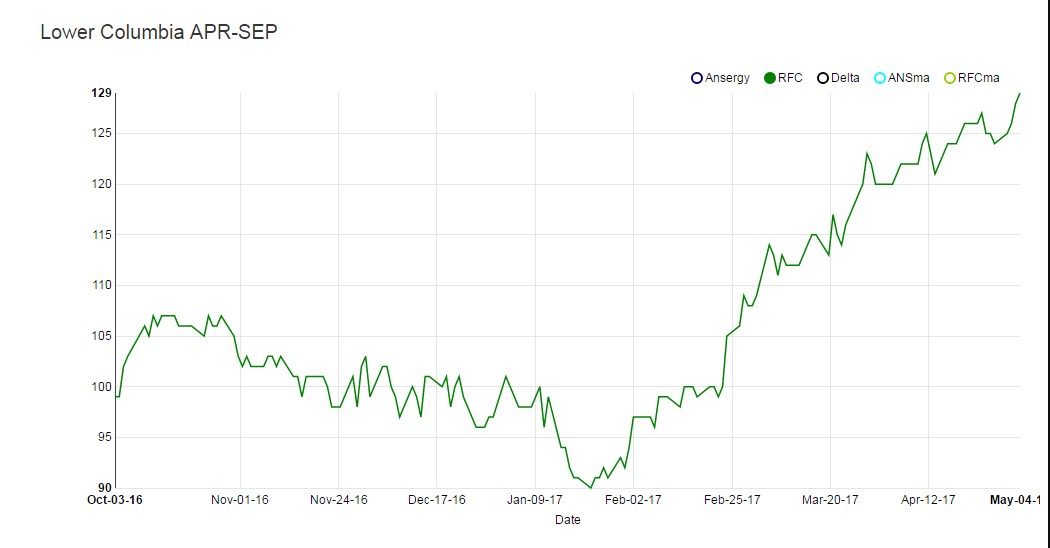 Contrast 2017 (red line) with the big years of 2011 and 2008; WY17 is more akin to 2014 per the above chart. This is a weighted composite for all Northwest production and is skewed upwards off of west-side anomalies; the producing basins are much lower than what is seen in the above.

The above NP15 chart is what a “big” year looks like and you see it is coming off hard.

Regulated flows also tell of a story of genral tightening, but you need to look at spill, not QG. Spill across the regulated projects has plummetted over the last two weeks, all of which confirms the 10 Day report. 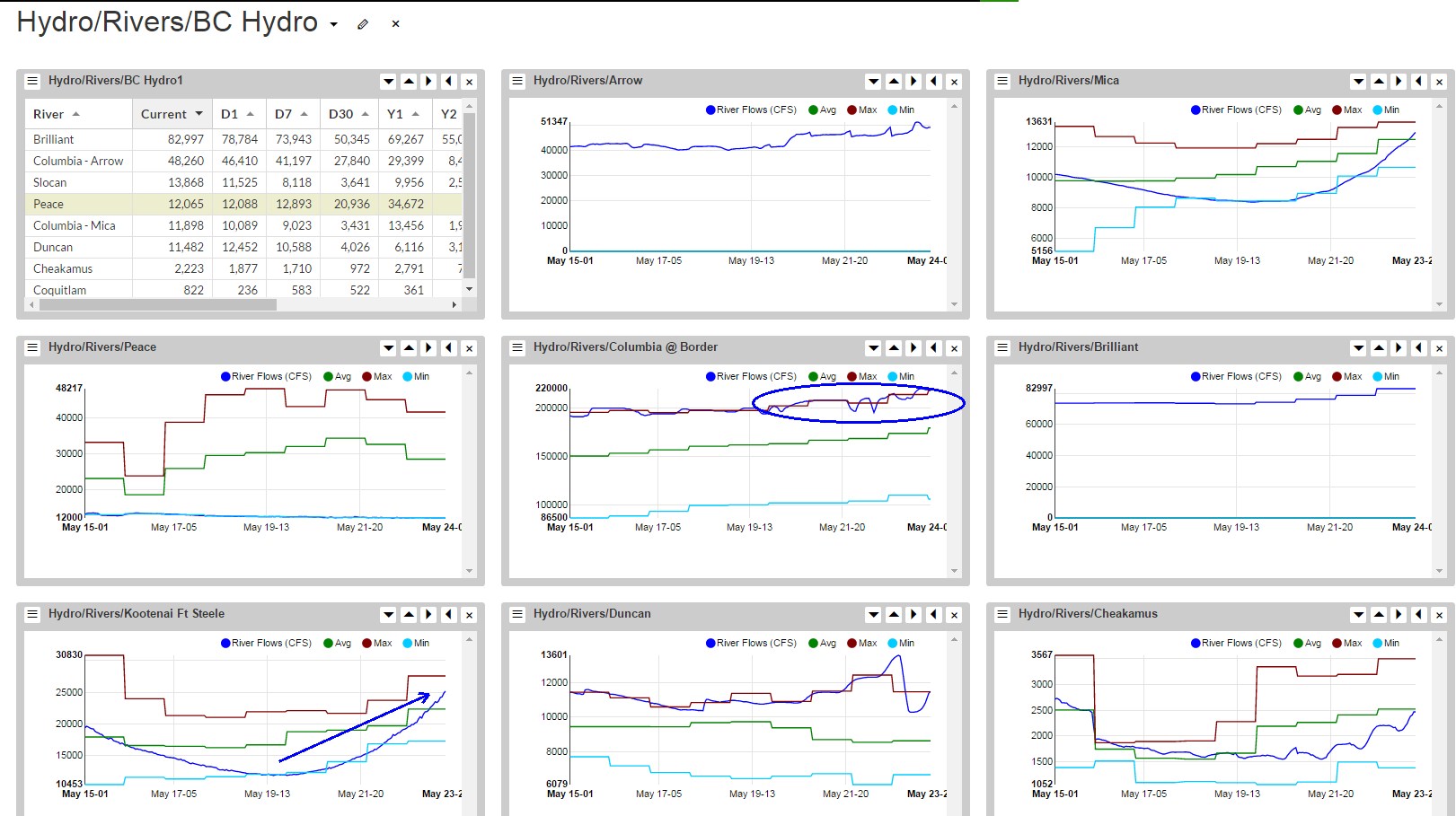 BC Hydro is a mixed bag, the only compellingly big flows, Columbia River at the Border, are not even BC’s. Mostly flows across the province are currently just normal. 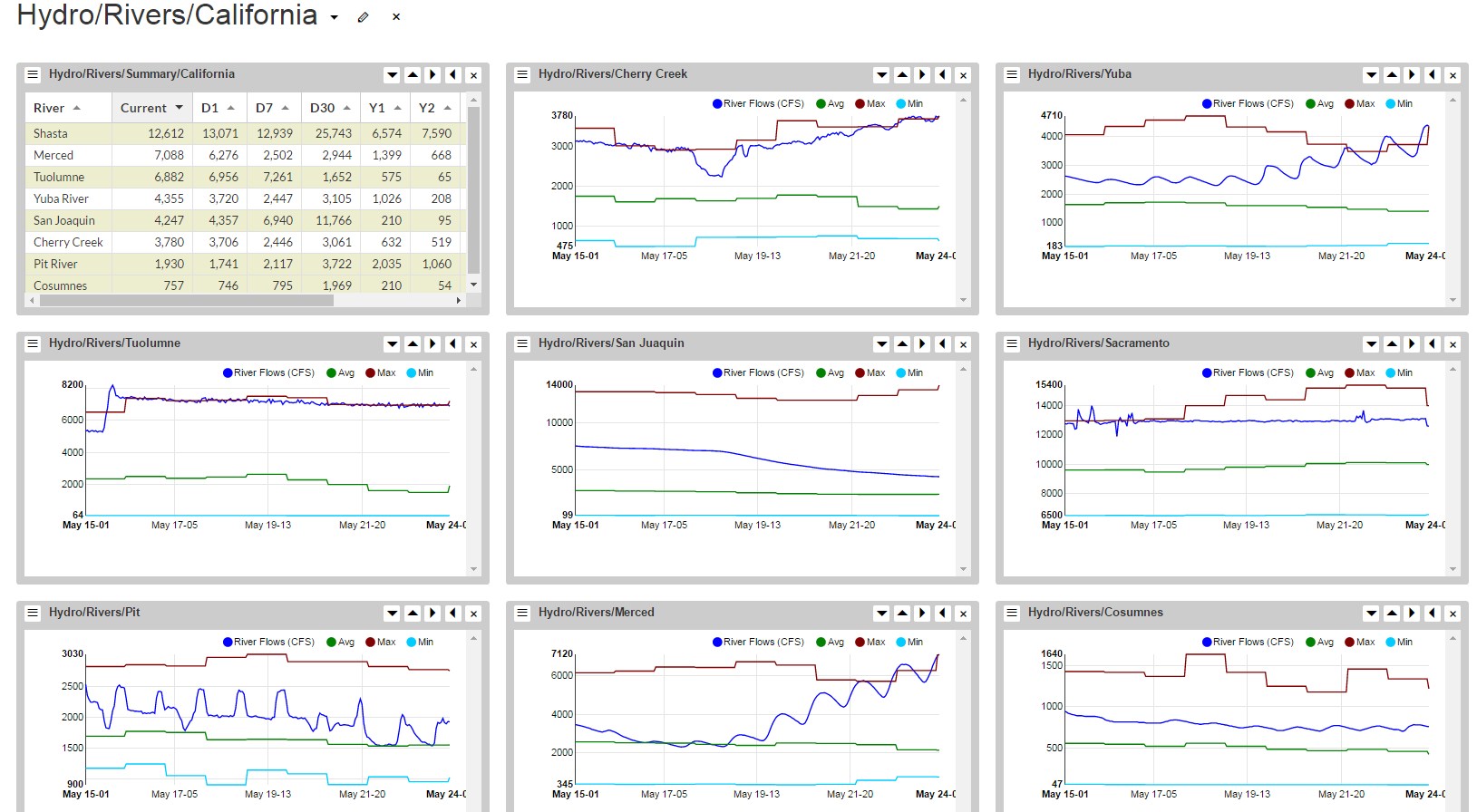 California has big flows, over half the stations are at six year highs.

We saw hints of wet in the northwet, but now we don’t. California remains dry to bone dry. 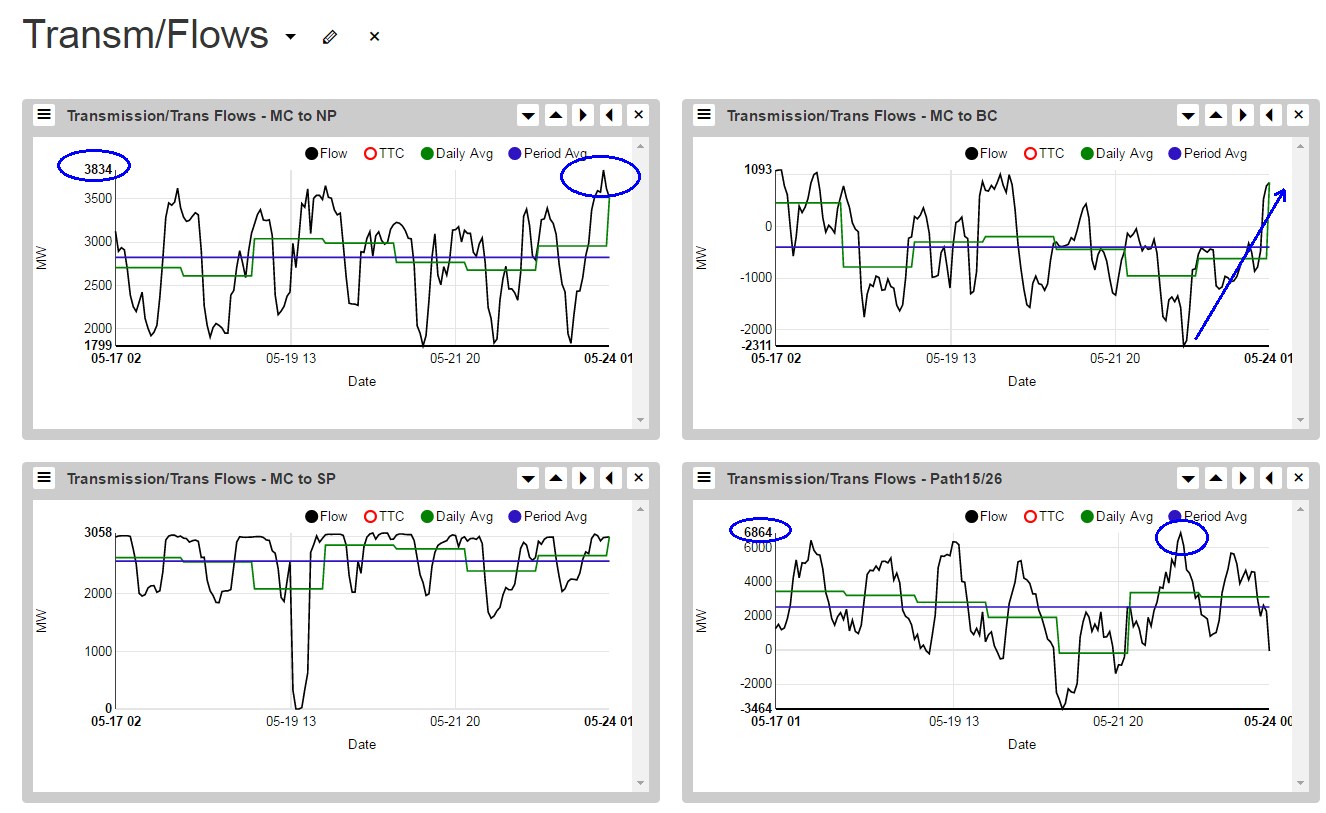 BC was a big buyer in the last few hours and the AC set a season high. The DC is flatlined, the nortwest will hit any bid, reasonable or not. Flows out of ZP (Path 15) also set a season high yesterday.

That northbound congestion should disappear with declining temperatures and rallying SP outages.

Most of those leaving the grid were in the south. On Monday we were surprised by the strong gas noms at Mid-C, let’s see how they fared: 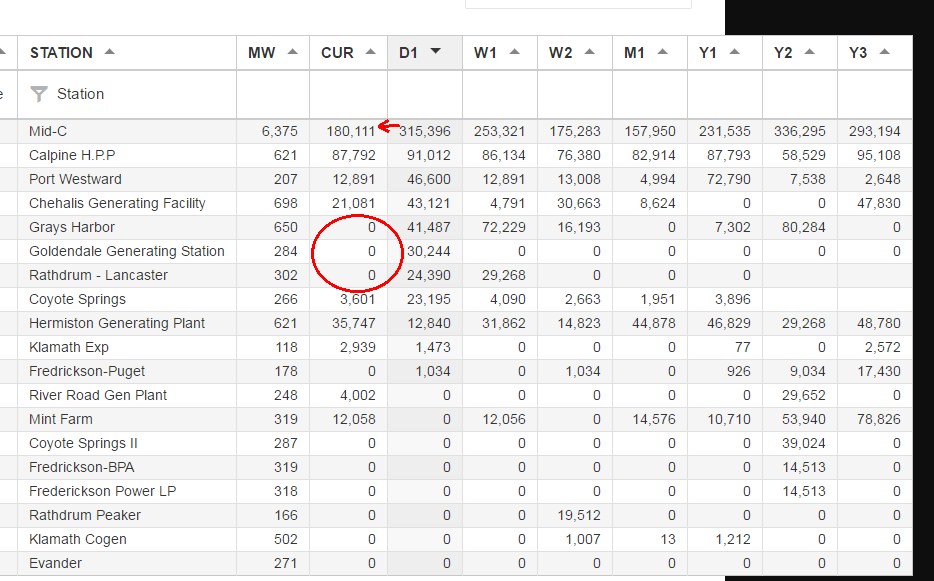 Seems most didn’t like the market and are taking the rest of the week off.

We’ve been spouting off about how we hated the May hype and went long the Prompt: BOM rolls – how’d we do?

That’s some azz-kicking volatility, seems the market woke up to its blunder and corrected itself. We’ll take all of those off for a handsome profit. We also noted (on Monday) that if you hate the BOM, t’s hard to like the Prompt and shorted June via the roll to July. That trade didn’t get much love, but we still like it and will keep it on.

We have also been pushing a June MidC LL around like a beggar does his shopping cart. The trade doubled and we are tempted to liquidate it:

But aslo like owning something as cheap as $4.00. The problem with the June LL will be getting through the first ten days, after that we’d expect to see LL clear at a Colstrip/Bridger price of $9-11. We’ll keep it on. Lilkewise, we like the July LL, too: 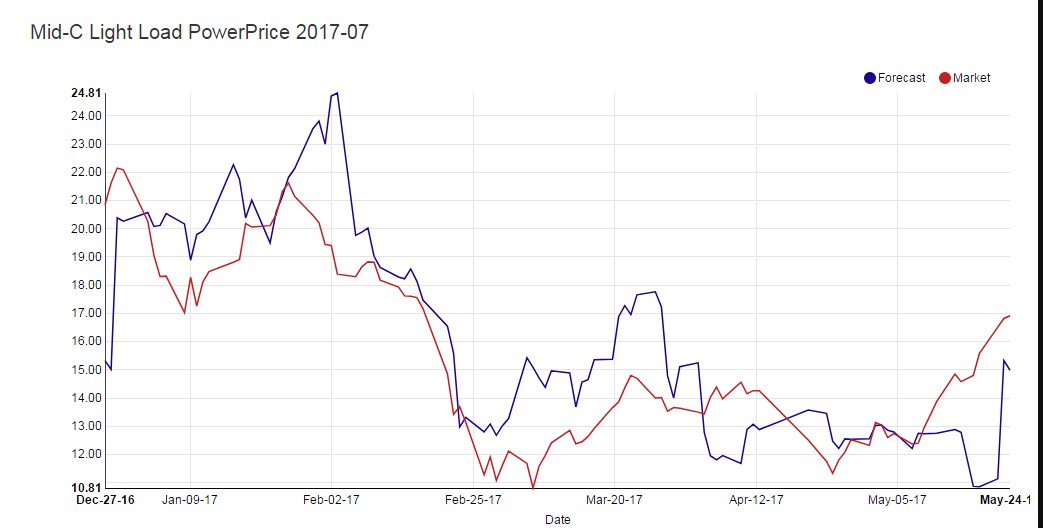 That forecast spike over the last day was all STP-driven; the feds posted a fall-out-of-your-chair cut of 3000 MWs in water, week on week, on Monday. The market is rallying, trend’s our friend, we’ll climb on too knowing there may be some pain when June becomes BOM and cash is a bomb, but we know that will soon pass. We also like the northwest heat – what you think Portland’s loads will look like on that first 100 degree day? Recall 2015, anyone?