We’ll check in on day-to-day changes in city forecast, first with Phoenix.  Memorial Day is cooling off by just a degree, otherwise the weekend is holding its course, though moving into next week we start to see some differences.  The first is now seven degrees cooler (coming in at a brisk 97), though daily highs are expected to recover quickly as they return to triple digits a day later.

Taking a peek at actual daily highs for Phoenix and you can get some context to exactly how hot this past week has been.  Yesterday set a new 10-year record and finished more than 15 degrees warmer than any of the past three years for that date.  Of course, this heat wave followed a much cooler period the week prior, we’ll see if things continue to operate like a pendulum.

Burbank is retooling its forecast the opposite direction of Phoenix as next week moves a little hotter, especially so on the 31st (11 degrees warmer).  Still mild today, but we should see highs back above normal by Sunday, and we still don’t have any rain in sight.

Moving up the coast to San Jose and we get a couple extra days of below-normal highs followed by a now extended warm up (June 1st is now projected four degrees warmer).  It will be warm, but we aren’t forecasting anything close to the 90s until well into June.

Move inland a bit and it’s a whole other story.  Today’s forecast is calling for mid-90s in Sacramento by Tuesday and hot weather throughout the holiday weekend.  The 30th is now 5 degrees warmer (and potentially a new 10-year high), and the 31st comes in 8 degrees higher.

This forecast seemingly gets hotter every time we look.  Portland is now forecasting a new 10-year high from the 26th through the 29th, with the 28th peaking at 90 degrees (three degrees warmer than yesterday’s forecast).  Temps aren’t going to approach normal until maybe the week of June 4th, and will peak at 21 degrees above normal on the 28th.

Much cooler in Seattle, compared to Portland anyway, though we’re still expecting new 10-year highs this weekend before quickly dropping back down to normal entering next week.  The weekend forecast is a couple degrees warmer than what was expected yesterday (the 31st is an exception as it’s now 9 degrees cooler).  No rain in the foreseeable future (through mid-June).

While the west side of the Washington Cascades gets a warm spring, the east side looks like it’s ready to jump head first into summer.  Spokane is forecasting a high of 89 by the 30th, two degrees above the all-time high (not just the 10-year high we normally quote), three degrees above yesterday’s forecast, and a full 29 degrees above normal. 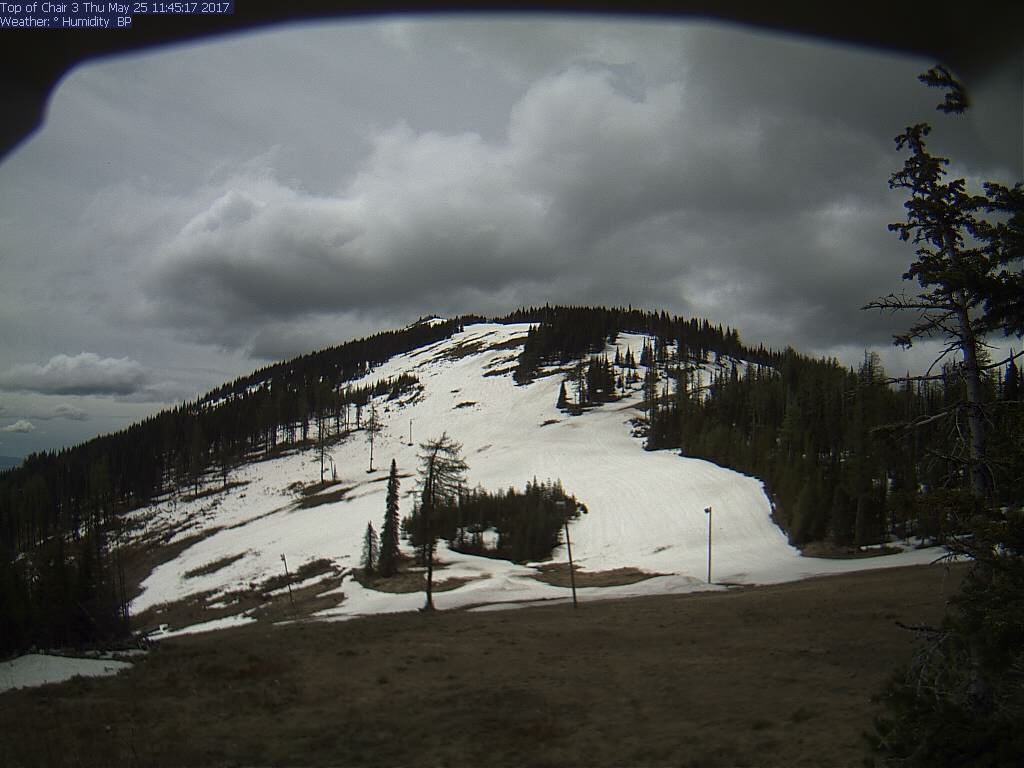 This is a look at the top of Mt. Spokane from earlier this morning, just under 6,000 ft in elevation.  The snow is receding quickly, and I can’t imagine much will survive a full week in the 80’s.

We’ll round out our look at weather with a peek at the eastern side of the Columbia River basin.  It will be considerably cooler than Spokane, though it’s also 1,000 ft higher.  Temps will max out at 82 on the 30th and sit above normal until the first week of June. 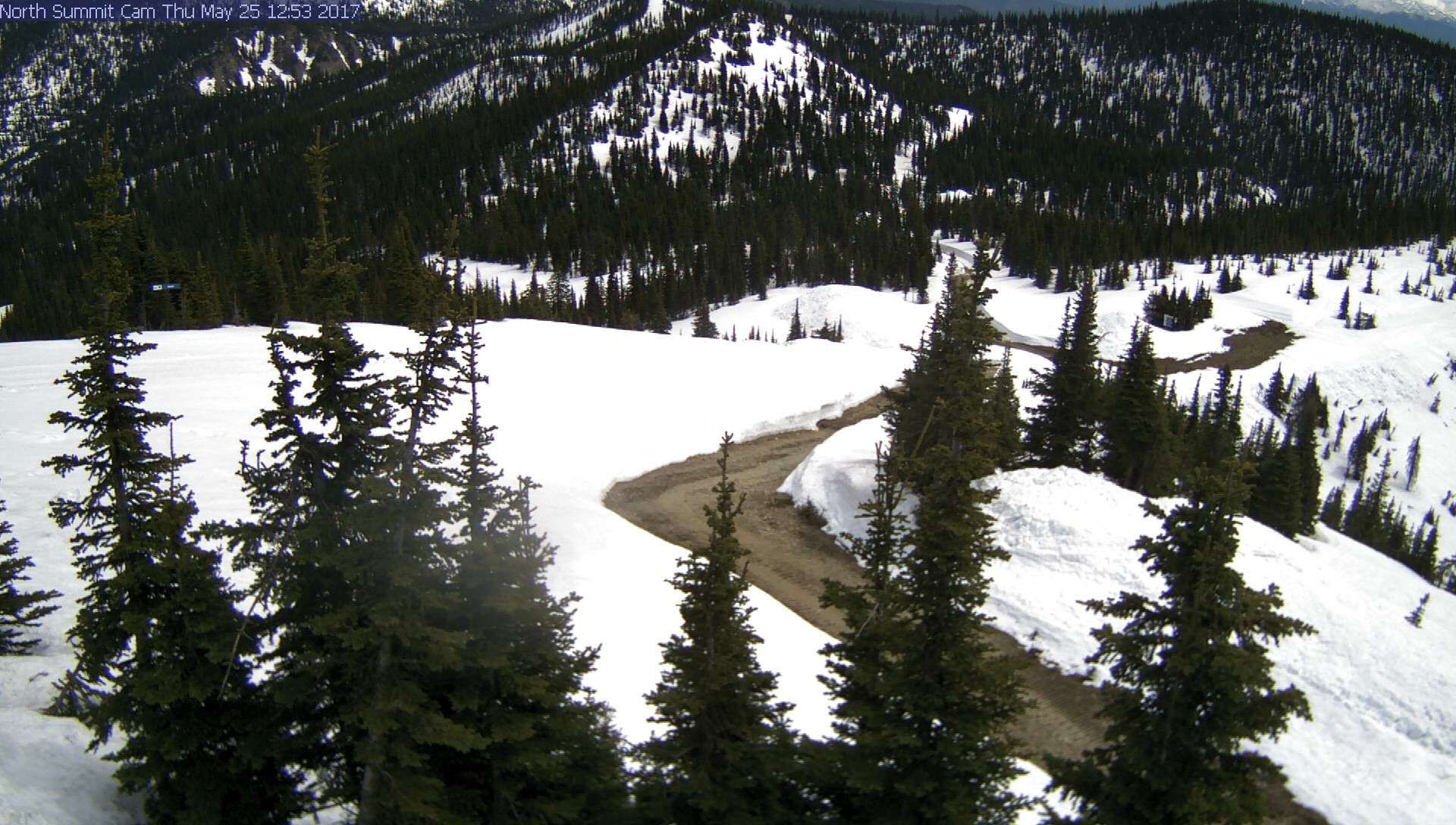 This view is courtesy of Whitefish Mountain.  Still a lot of snow at 6,500 ft, but I expect the Memorial Day warmup to also take its toll in Western Montana.

Starting to see a strong build up leading into June as STP tops out at 27,316 MW by the 2nd.  The NWRFC 10-Day is following a similar pattern, with the largest day-to-day jump occurring on the 30th to 31st where we see an increase of 522 MW.

Sideflows remain elevated week-over-week, but there is a lot more variance in day-to-day changes as the Kootenai and Methow both dropped more than 10%, while the Okanogan and Chelan continued to increase.

As expected with lower temps throughout Mid-C, loads plummeted yesterday with a day-over-day decrease of 3,000 MW.  The drop also brought demand in line with last year as the two years differed by just over 200 MW (compared to close to 3,600 MW on Tuesday).

SP-15 loads remain well above last year’s levels despite the dramatic drop in temperatures in Southern California.  Demand finished up nearly 1,500 MW yesterday in year-over-year results, and 1,900 MW higher than the same point a week prior.  Demand dropped close to 2,600 MW from Tuesday to Wednesday. 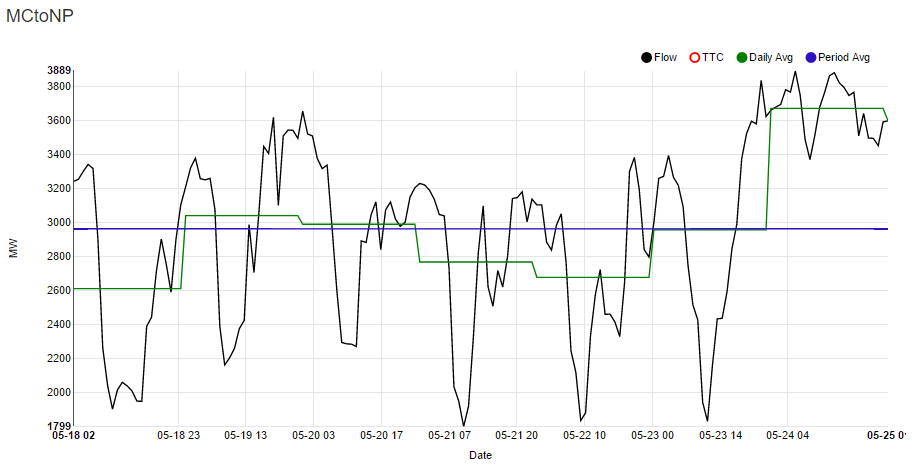 Flows started increasing mid-day Tuesday and stayed elevated for all of yesterday (and into today) as the daily average jumped up 700 MW day-over-day.  Tuesday’s low of 1,829 was dwarfed by yesterday’s low of 3,368 MW. 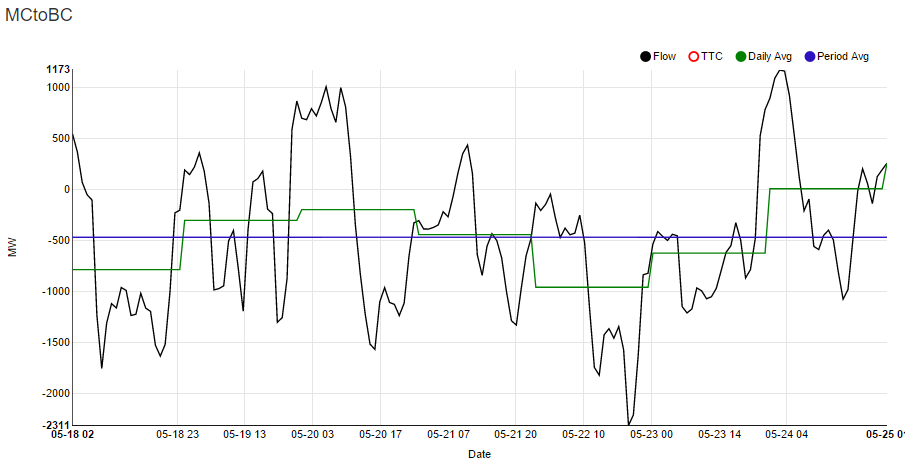 As Mid-C increased its flows south into NP, we saw the daily average flow move to almost neutral at just 9 MW for yesterday, though early morning hours peaked at 1,173 MW (moving north).  Contrast that to late Monday’s low of -2,311 MW.  The weekly average flow currently sits at -466 MW.