We’ll start off with a quick look at reservoir elevations in the Northwest.  Dworshak had the largest week-on-week elevation change with a jump of more than seven feet, while Libby had the second largest change with an increase of 2.4 feet.  No other dam increased or decreased more than a foot, though Grand Coulee increased 9″.

Dworshak’s steep rise began on April 16th and compares to a similar slope seen in 2014, though that year’s elevation was about 18 feet lower when the fill began.  The reservoir reached its peak from the second to fourth week of June each of the past three years. 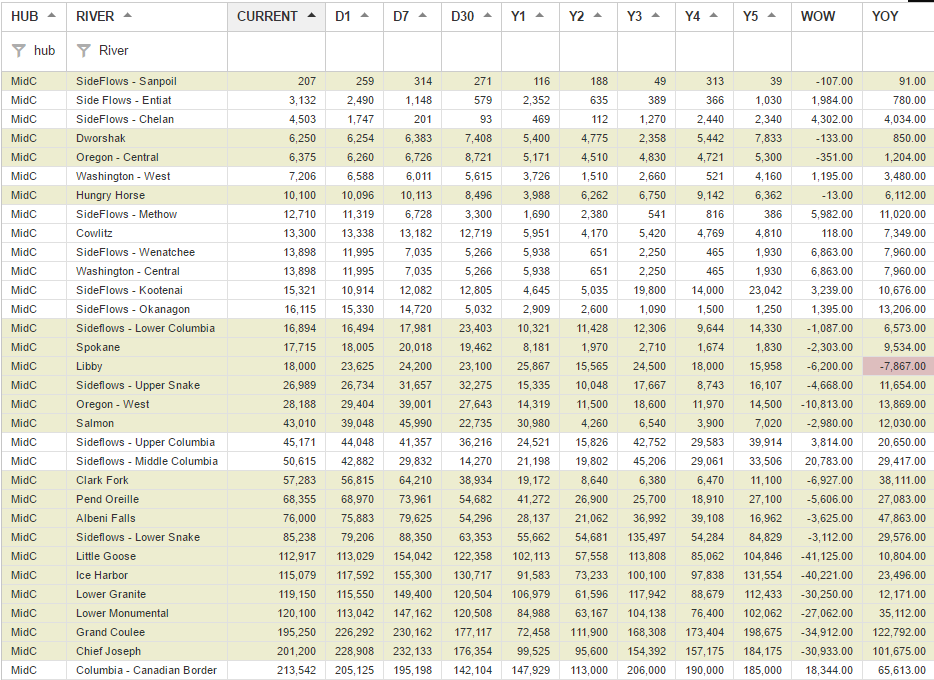 More rivers are down week-on-week than not, but look closer at the day-to-day changes and you can see some significant movements.   Chelan Sideflows are up 157% in a day, Wenatchee Sideflows increased 1900 CFS, Kootenai Sideflows added 4400 CFS, and Middle Columbia Sideflows jumped up 7800 CFS.

Chelan Sideflows are currently sitting at 4,528 CFS according to the Hydro Rivers Summary, which would put it well ahead of any other May CFS flow other than last year (peaked at 7,438 CFS).  With heat sticking around Washington for a few more days, that number could jump even higher.

Big movements in STP over the next few days as the forecast drops 1,100 aMW through the 27th before slowly increasing again, albeit at a slower rate.  The NWRFC 10-Day Forecast also had a sharp day-over-day change with significant decreases throughout the forecast.

The first real Mid-C heatwave brought heavy demand as expected as yesterday peaked at 22,488 MW, a 2,500 MW week-over-week increase, and 3,900 MW annual increase.  Light load demand was down heavily early Monday which kept the daily average somewhat in check as it finished about 450 MW higher than last week’s peak, though still 1,300 MW higher than the two-week average.

SP15 demand on the other hand has had a steady ramp up to what ultimately ended in a weekly increase of 4,500 MW as of yesterday.  This also equated to a 4,150 MW year-on-year increase for the same day last year, though yesterday’s high would have beaten any day from last May.  The daily average finished 2,150 MW higher than the two-week average.

Similar story in NP-15 as demand increased nearly 3,600 MW week-over-week and 3,500 MW year-over-year.  Also seeing a large increase in Monday’s light load as some of that heat is lingering well into the night. 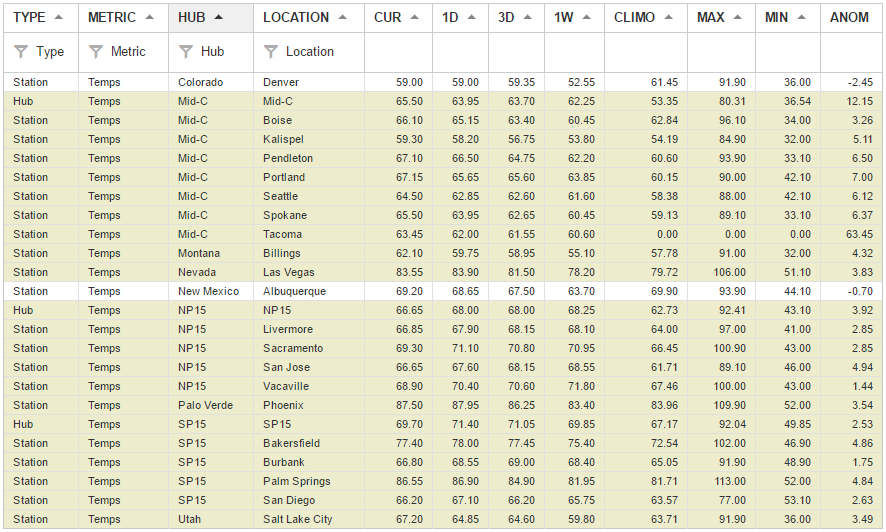 A quick glance at the temperature summary table and you can easily see the obvious — it’s warmer than normal everywhere in the west (besides Albuquerque apparently).  The Northwest leads the way with most average temp anomalies well above six degrees.

Burbank’s heat wave is quickly coming to an end as daily highs will be back into the 60s by the 25th, and are now forecasting a couple degrees cooler than they were yesterday.  There will be a second, smaller warm soon after, though daily highs aren’t expected to reach above the mid-80s.  There is a small chance Burbank could get close to a 0.10″ of precipitation tomorrow as well.

Phoenix is still set to beat the 10-year high by five degrees tomorrow, but the forecast is showing decent changes moving into next week.  The 30th is now showing up four degrees cooler and is followed by a slow ramp up to a new high of 107 by the 3rd of June.  Each day of the week of the 28th should reach well above normal.

San Jose gets the same cool down through the week before moving back above normal, but it’s looking a few degrees cooler than originally expected.

There is a quick three-day reprieve from 80+ degree temps in Portland beginning tomorrow before again setting new 10-year highs on consecutive days.  Today’s forecast is a moderate increase from yesterday for much of next week. 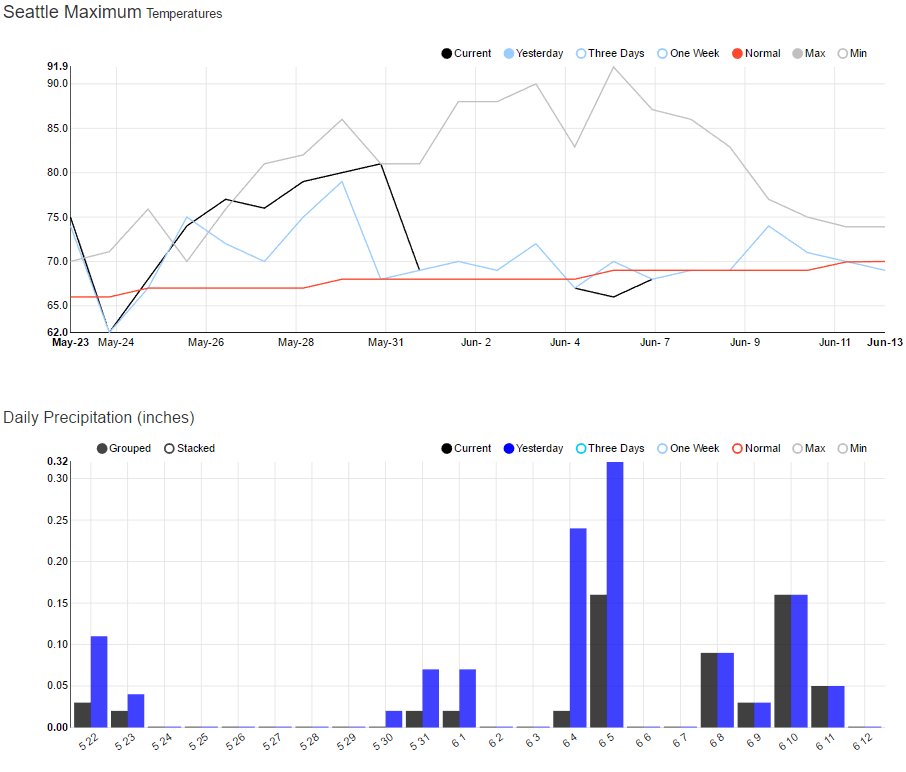 Seattle is a bit cooler than Portland, but we are seeing the same increase in forecasted highs for next week as temps reach 10+ degrees above normal and move into the 80s once again.  I’ve included the precipitation forecast as well since some of the rain we saw for late next week seems to be falling off or at least dramatically reduced.

ISO Gas outages increased roughly 800 MW over the weekend to settle at 9138 MW as of yesterday.  This is down close to 3000 MW compared to the first week of May.

Moving the focus off gas, hydro outages increased 200 MW to 1736, while Solar recovered 136 MW bringing all outages back online.