Still going to be cold today (11 degrees below normal), but that will quickly change, especially heading into next week as the new forecast calls for aggregate temps as high as 80 on the 23rd which would put Mid-C 13 degrees above normal, and 11 degrees above yesterday’s forecast.  Each day from the 20th through the 25th is now forecasting above yesterday.

So where in Mid-C is this heat wave going to be centered?  Let’s take a look.

Seattle will briefly touch 80 and is set to fall back to normal faster than Mid-C as a whole.  That 80 degrees is enough to beat the previous 10-year record by nearly 10 degrees.

Portland looks like it will take the brunt of the warm up as daily highs move well into the 80’s and as high as 86 by the 23rd.  This would smash the previous 10-year high by more than 12 degrees.

Spokane on the other hand is several degrees cooler than Portland and Seattle as temps are forecasting below 80, even at the peak.  One difference worth noting, however, max temps will stay above normal for a couple extra days.  Spokane should be above or at 70 through the end of May beginning on the 19th. 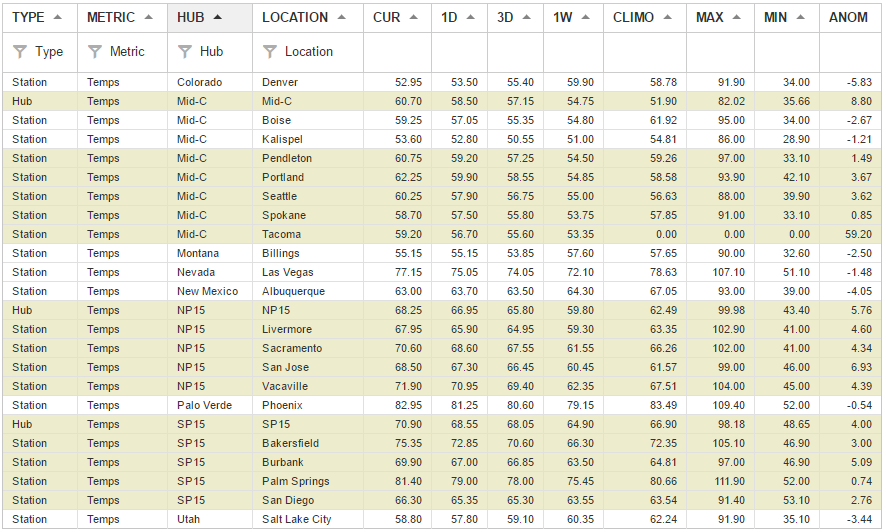 While Mid-C might be most noteworthy, NP and SP are forecasting well above normal as well.  Alternatively, nearly all stations east of the Rockies are below normal for the next 10 days.

Not much change in the forecast for this week, but next week is higher as the warm front won’t taper off as quickly as was thought yesterday.  The difference in today and yesterday is at its peak on the 23rd as today’s forecast is 7 degrees warmer.  San Jose is set to reach into the high 80’s from the 19th through the 22nd.

Similar story in Burbank but with an even more dramatic shift from yesterday’s forecast for next week as the difference sits at 9 degrees for the 24th.  The 24th and 25th are now both on pace for new 10-year highs.  Burbank is forecasting above normal from the 18th through the 28th. 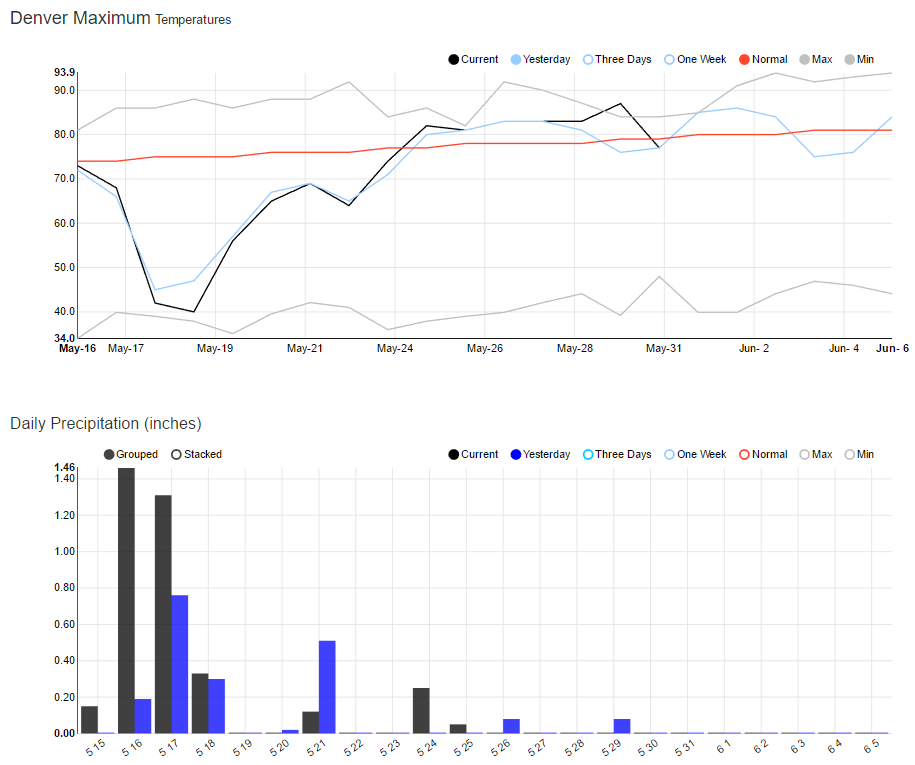 On the opposite side of the forecast spectrum, Denver will see its daily highs plummet into the low 40’s, coming with a couple degrees of the 10-year low for the 18th and 19th.  If the dramatic change in temps wasn’t enough excitement, consider that Denver is set to get nearly 3″ of precipitation over the next three days as well.  With a low of 29 for the 19th, we could see some of that fall as snow.

As the summary table suggested, Phoenix will have a relatively neutral average temperature anomaly over the next 10 days, but that is largely due to a cold first five days followed by an equally hot last five days.  This heat will especially pick up by the 25th as temps will jump as high as 104, two degrees above the 10-year high and two degrees above yesterday’s forecast.

Grand Coulee has increased 10 percentage points since the end of the draft on May 5th, increasing from 29% to 39%.  The current level is the equivalent of April 8th.

STP is forecasting above the NRFC through the 10 day forecast, especially on the 18th where it is 343 aMW higher.  Today’s forecast is slightly higher than yesterday’s through the remaining 10 days, but especially from the 17th-19th.  The overall forecast is showing a peak on the 17th at 28,422 aMW.

Last week finished with loads mostly down year-on-year, but that trend is moving in the opposite direction now as yesterday’s loads peaked at 1,433 MW above last year.  Demand is also up week-over-week to the tune of 222 MW.

With mild temperatures came mild demand for SP, especially compared to last year as the end of the previous week saw the year-over-year difference grow to more than 1,300 MW.  Yesterday’s loads dropped below the seven day average by 386 MW.  This all appears to be the calm before a mild storm as temps begin to creep back above normal beginning Thursday.

Last week saw the year-on-year difference in demand move both positive and negative, while this week is largely below last year (by as much as 812 MW yesterday).  Demand is also down week-over-week, this time by 789 MW. 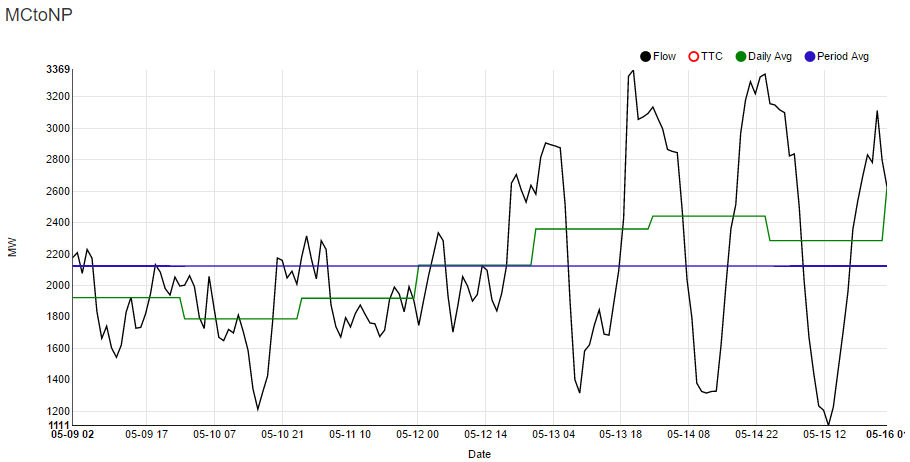 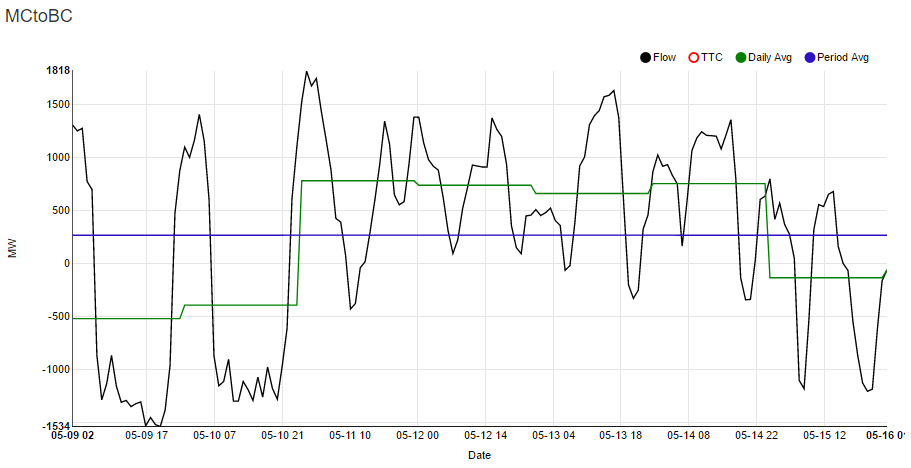 The MC-BC line had been holding steady in positive territory but it made a  sharp shift yesterday when the daily average finished negative for the first time in nearly a week.  Flow dropped below -1200 MW late last night and had yet to reach back above 0 as of 2 AM this morning.  The seven day average currently sits at 270 MW.