Another week without monumental changes, especially on a day-to-day basis.  Most elevations dropped, the largest of which came from Dworshak with a decrease of 8.12 feet.  Of the seven dams with increases, the largest came from The Dalles with just a half of a foot increase.

Grand Coulee is still dropping, having fallen another five feet since last week.  The graph quickly tells us the reservoir is lower than any point in the past two years and is currently just a half foot above the lowest point in 2014 (and has reached that point two weeks earlier). 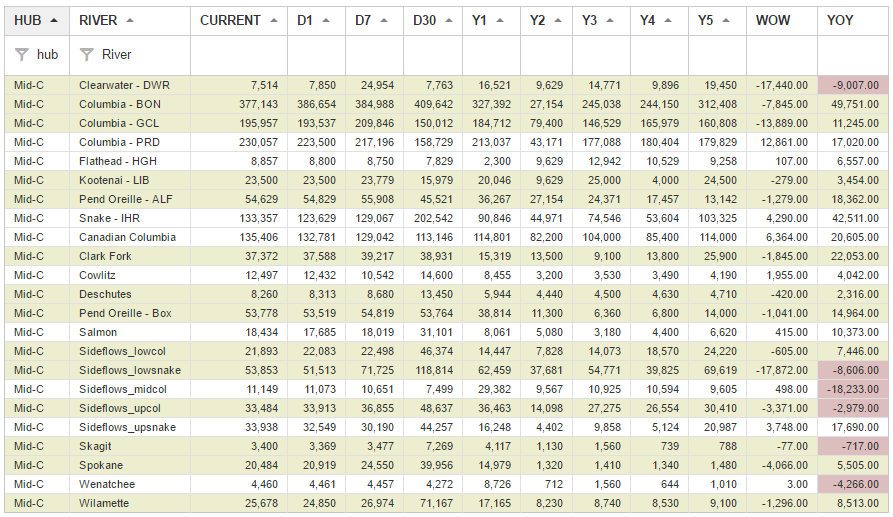 Mixed results for Mid-C rivers, though the biggest movers looked to have been trending down week-over-week.  The Spokane river lost another 4000 CFS and is now close to half the flow it was a month ago.  The Sideflows into the lower Snake decreased nearly 18000 CFS or 25%.  The Cowlitz river increased the most in terms of percentage with just under 20%, or 1955 CFS.  The Columbia at Priest Rapids Dam jumped up 12,800 CFS as well.

Spokane’s sharp increase and decline has all taken place in roughly a month, a much steeper slope compared to every other year.  Despite barely sitting above 20000 CFS, it still equates to a higher flow than at any point in 3 of the past 6 six years. 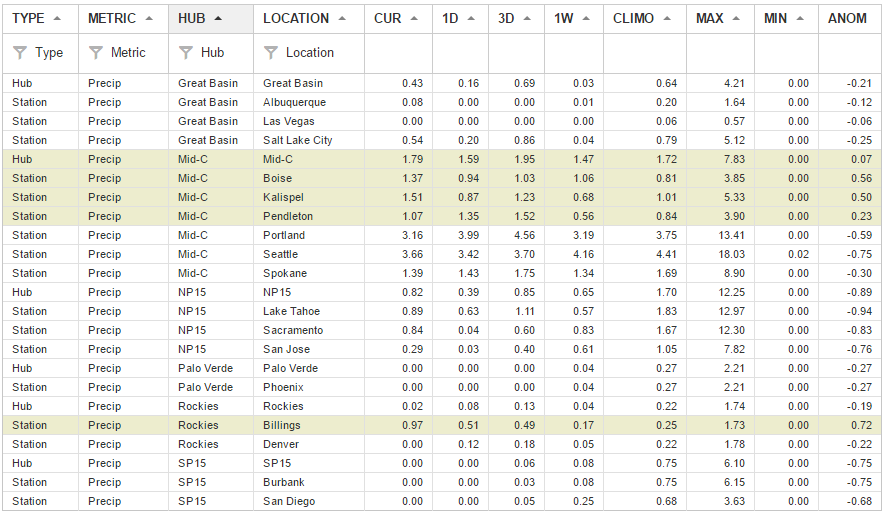 Now with a broader look at the west, it appears it will be relatively dry as all but four stations, and just one hub will be below normal for precipitation over the next ten days.  Salt Lake City and Kalispell have the only significant precip anomaly, with .8″ and .3″ respectively.  NP looks to be the driest over the same time period as Lake Tahoe falls more than an inch below normal and San Jose is forecasted just under .6″ short.

The 10-Day River Forecast showed a decline compared to yesterday for each of the next ten days, and is now lower than STP through the forecast as well (by as much as 700 MW over the next few days).  Despite the day-over-day decreases, the RFC is forecasting steady increases through the week with a peak of 27,546 on the 25th.

SP15 demand increased yesterday, but nearly at the same rate as it did the year before as loads finished down 1705 MW annually.  Demand was up 465 MW week-over-week. 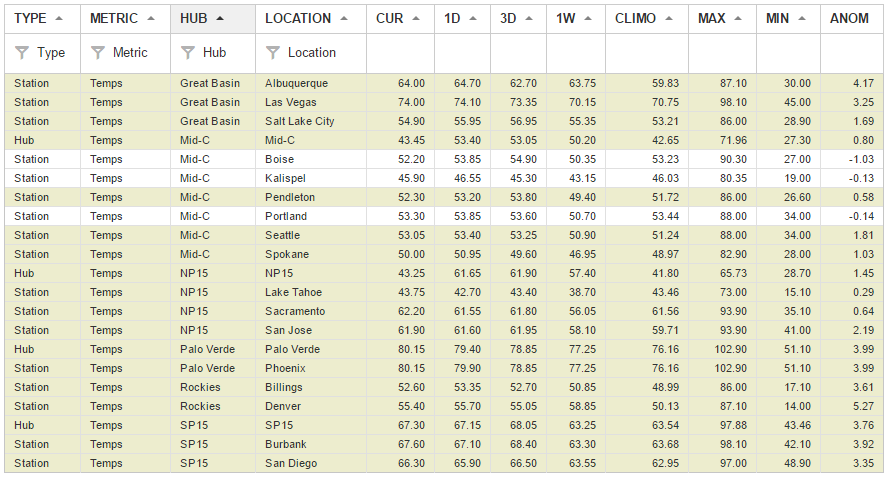 A peak at the temperature summary and we can see that it will be warmer than normal for almost all of the west save Portland, Kalispell, and Boise.  Rockies are still warm, though we aren’t seeing the anomaly that has been reported several times over the past three weeks.  SP-15 is now joining in on the fun as both Burbank and San Diego are comfortably north of three degrees of anomaly.

Burbanks temperature anomaly is readily apparent in the temp chart as things will begin to heat up rapidly beginning tomorrow.  There is a chance of three consecutive days with 10-year highs, peaking on the 22nd at 90, five degrees above the previous high, and 16 degrees above normal.  The heat wave is expected a day or two earlier than forecasted yesterday.

While San Diego had a similar temperature anomaly compared to Burbank, we aren’t seeing the same highs in the 90s as the warm front is expected to raise temps into the high 70s.  Despite that, we should still see up to four consecutive days of new 10-year highs.  Of course, temps rise fairly quickly as you move inland. 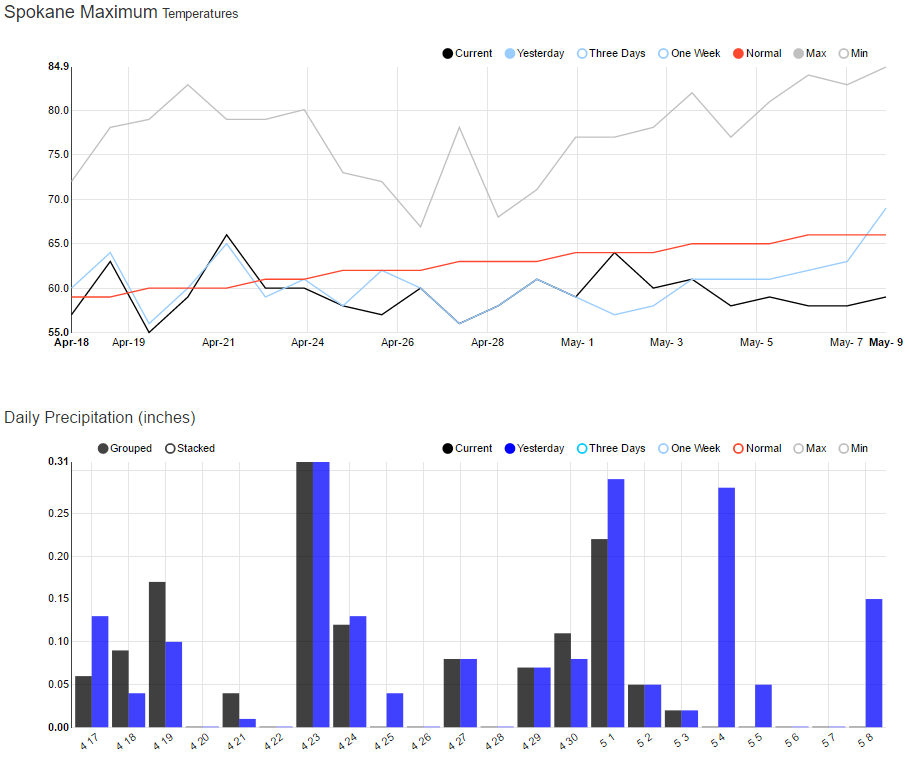 We mentioned a system containing heavy precipitation was looming on the Northwest last week, and low and behold, it has been cut back heavily.  Precipitation now almost entirely falls below .2″ each day at the end of the month.  Temperature wise, Spokane continues to comfortably toe the normal-line, though the forecast trends cool starting this weekend.  There is still significant snow in the higher elevations, and we’ve yet to see a hint of a warm blast to knock it down a few notches.

Gas outages offered a very brief reprieve on the 13th, but have since built back up as it now sits at 6706 MW.

This level of gas outages haven’t been seen at any time since November, as shown in the chart above.

Outside of gas outages, we also saw a jump in solar outages having moved from 40 MW to 304 MW, as well as hydro adding another 90 MW to its total.

Week-over-week demand fell sharply in Great Basin, though it got a lot of that back day-over-day.  Mid-C also had a steep day-over-day increase having moved from 1,118 MMCF to 1,199 MMCF, pushing it above last week (1,151 MMCF).