NOTE: Ansergy will not be blogging Monday; I am on holiday.

Is it time to surrender our BOM long bias at Mid-C? Our forecast would suggest yes, but weather tightens which will increase loads and back off natural river flows; though by the time all of that happens (next week) bom will be bow, as in bow-wow, a dog of a trade (from the long side).

Yesterday was uneventful, aside from the warm-up at Spokane and Boise; both city’s lows were above freezing and if it would only stay that way the MidC world, as we knew it this winter, would end. But it doesn’t, though this weak temperature may explain why Puget is paying people to take their energy in the EIM: 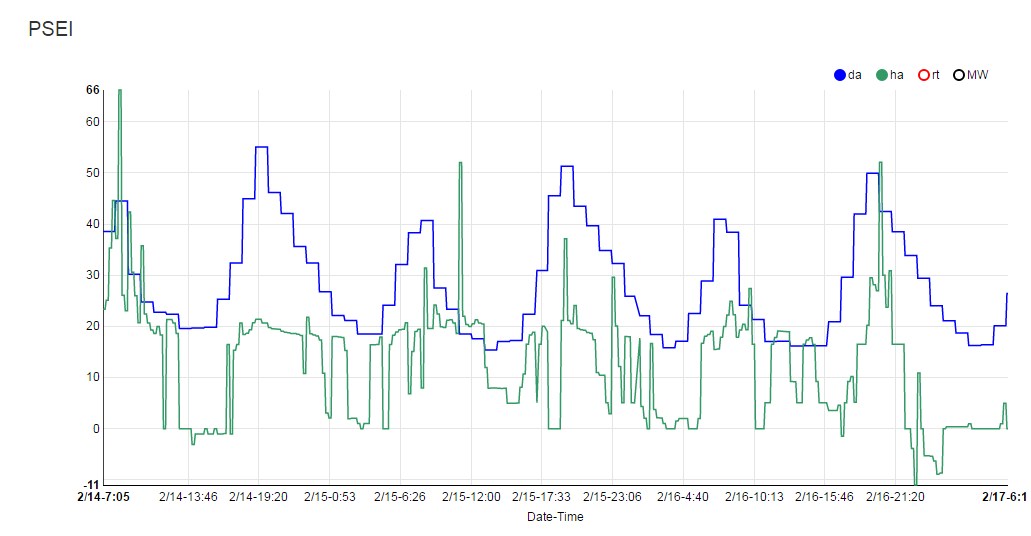 Paying everyone but me, I’m still paying the $100/mwh for power they are paying to get rid of.  Perhaps that shall pass, as the weather reverts to cold… 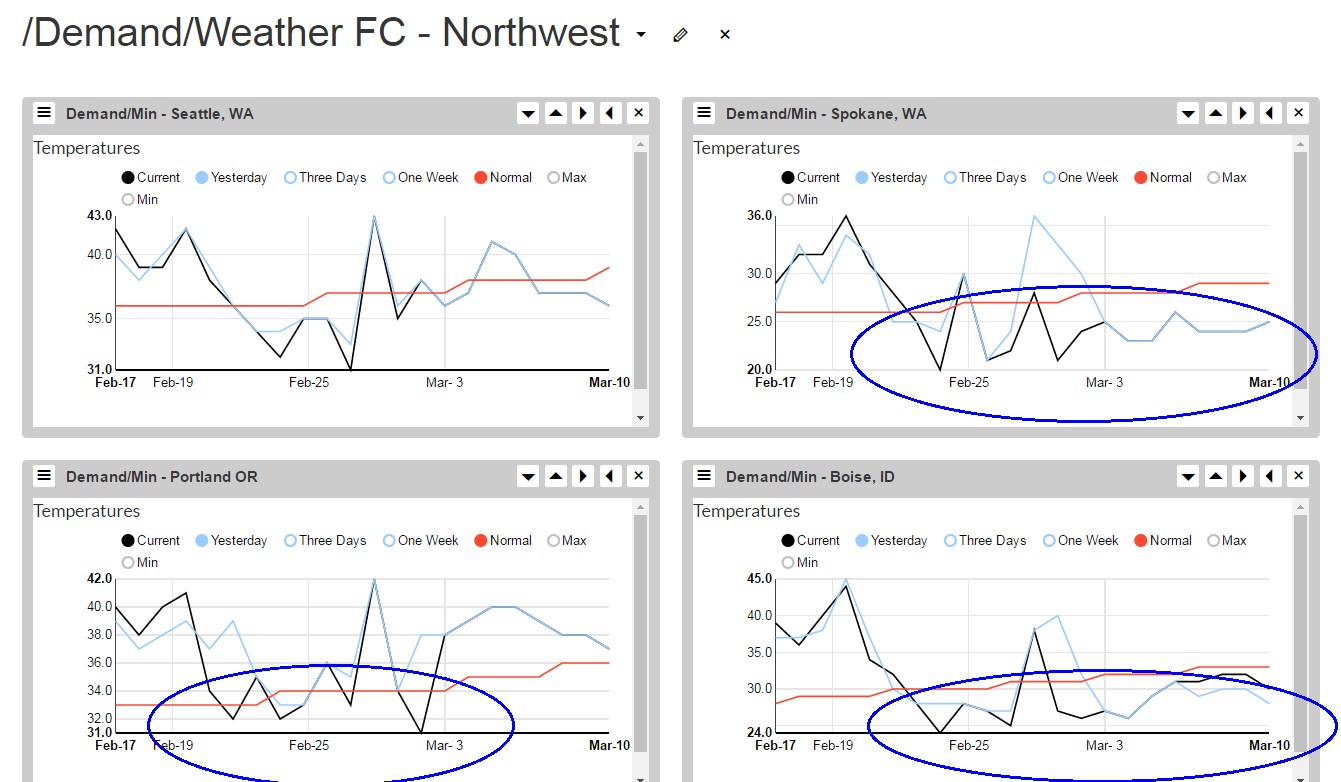 Temperatures are falling back, in the interior, they are falling below zero; loads will rally and melt will collapse. 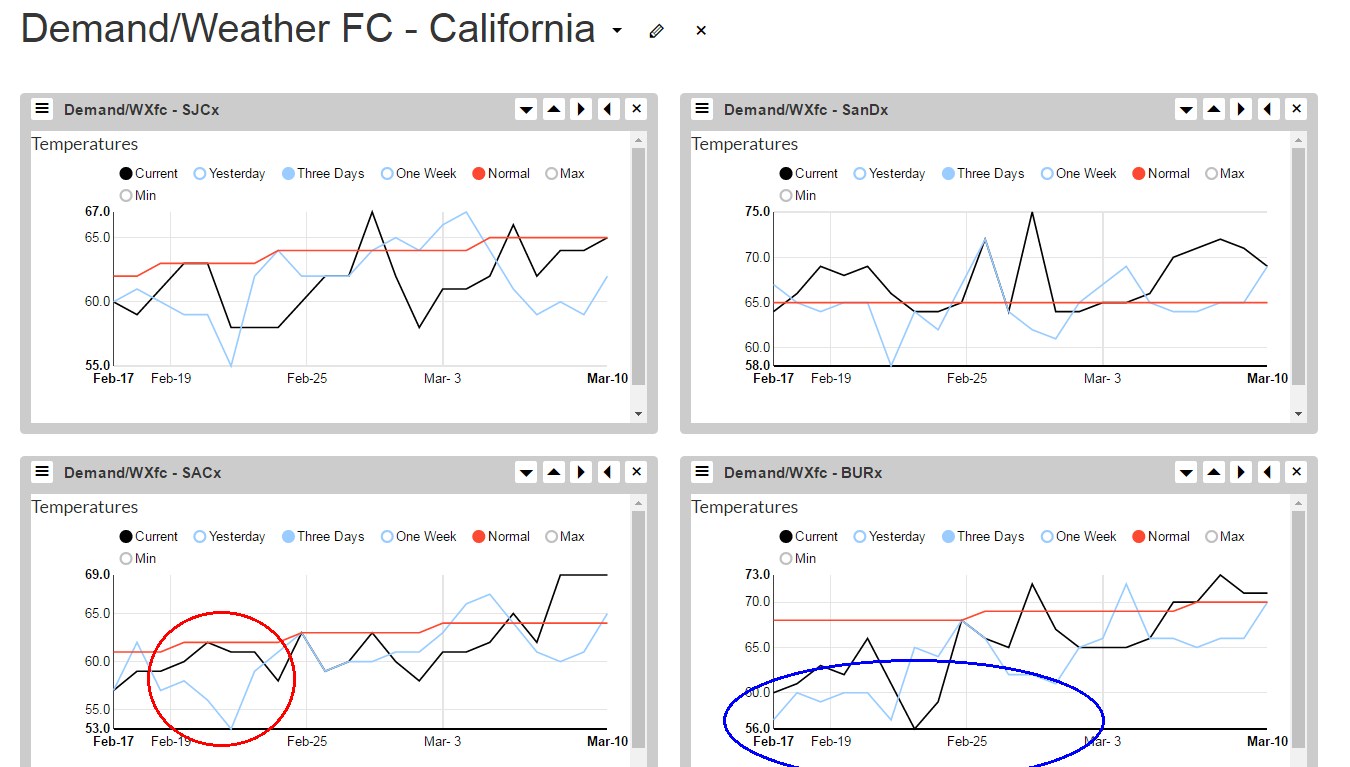 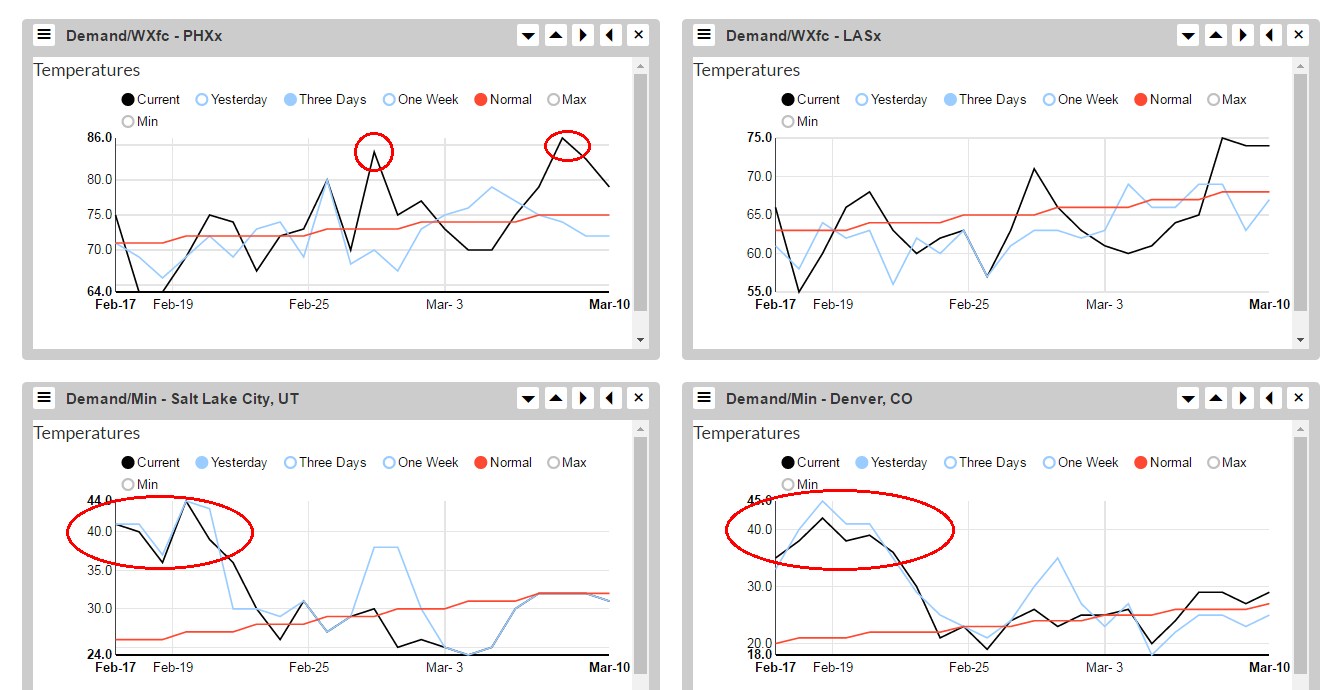 The WECC interior is very warm, at least at Salt Lake and Denver; where it would be good to be very warm, Phoenix, it is poised to be very cold, but the forecast comes with hints of mid-80s which evokes a yawn.

Loads are just normal for this time of year; even the MidC has reverted to 2016 levels for the first time in eight weeks.

Demand is boring, hydro is not; hydro is the new crack, and we like it.

The northwest spits and sputters some more precip, but overall it is drying out. California is drying out, but not before it washes out to sea:

Four inches in SP15? They haven’t received four inches of rain in the last ten years; now they are getting it in a day.  I heard Burberry had to charter A-380 to fly in more umbrellas.

Arrow has fallen off a cliff, down to 10kcfs; if a moose wandered onto the river and took a leak flows would double. Cally flows are coming off but will surge after this impending storm lands. Coulee and Priest are both down while BON is strong. Speaking of strong, the freshet has begun as evidenced by the Spokane posting a 10k handle; once it starts, on the Spokane, it is hard to stop, and we suspect that those 10ks will not be leaving us. The Cowlitz and Skagit are up, more off rain that melted snow. We also noted some of the side flow indexes are off and with the cooling weather they should continue to drop. 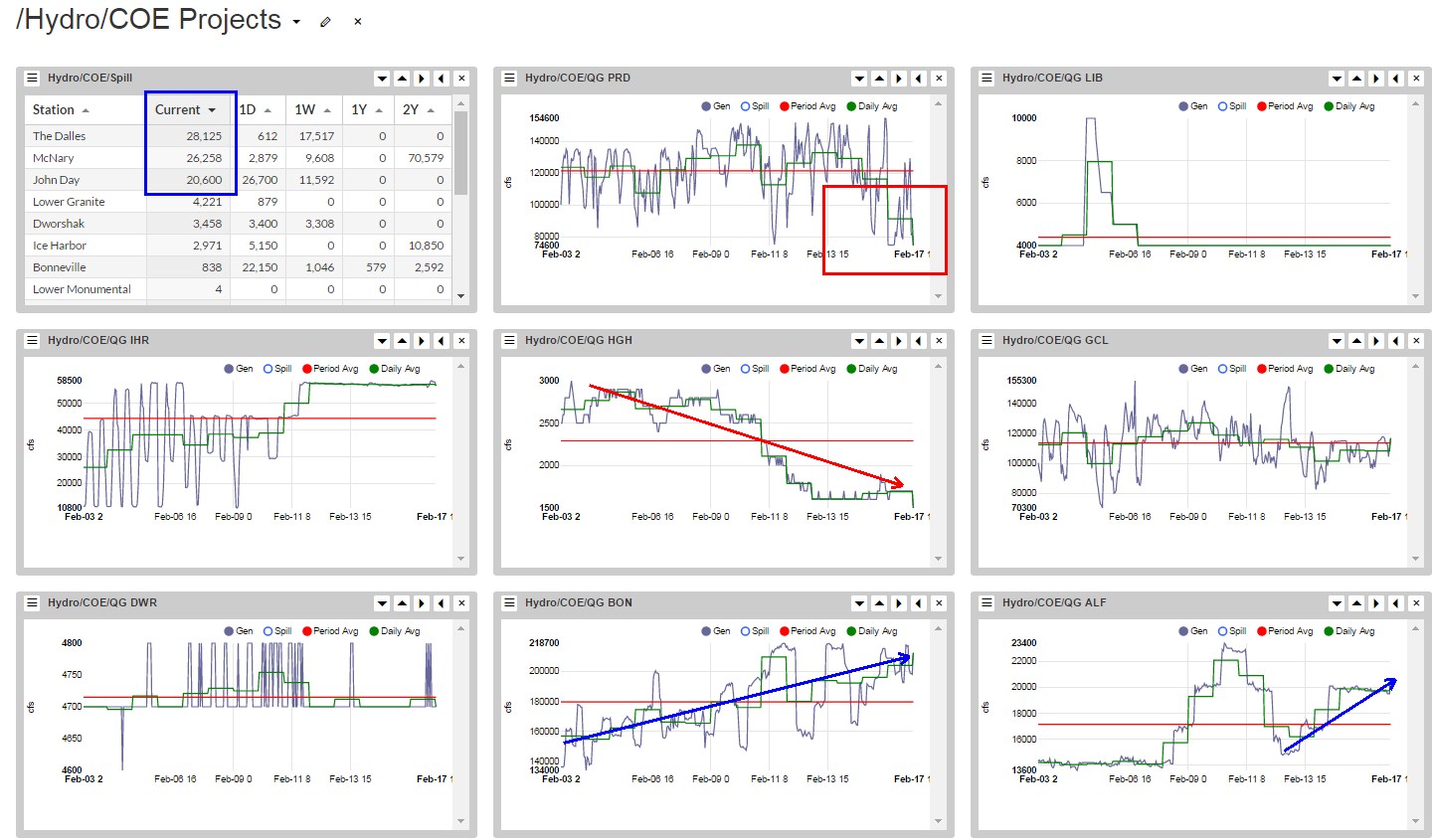 This is a new Dashboard, and we like it; one look and you know it all. BPA is spilling on the Lower Columbia (for price) while flows at Priest tumble, as are flows at GCL. LIB and HGH don’t even think about releasing any water, now while BPA is pulling Coulee down, but forget those two, the two we care about are the Pend Oreille and Spokane. You’d think the feds would cut flows out of ALF to make their draft easier, but flows have risen. We think, like the Spokane, there is a strong rally in natural river flows, and Lake Pend Oreille can’t hold any more water. If it would only hit 70 degrees then all hell would break loose on that river; BPA might see an additional 70-100kcfs of flows coming into the reservoir, all of which must be passed out. We don’t see that warm coming in today’s forecast but its just around the corner. Fortunate for the feds, it will probably happen after the reservoir has met its drum gate target.

Water Supply is moving up; now the RFC has TDA at 100%; we see 94% as normal, so this is a BIG water year. Every hub is now at normal or above, it’s a big wet La Nina year, but the MidC is heading towards dryer weather, its ten day precip is about half of what it was earlier this week. We also wanted to point out that total storage in California is now greater than BC Hydro – that’s something you don’t see every year.

Mostly the RFC has raised its outlook from Wednesday; a few days are slightly lower, all are massively higher than the STP (Monday). This has wreaked havoc on our BOM forecast: 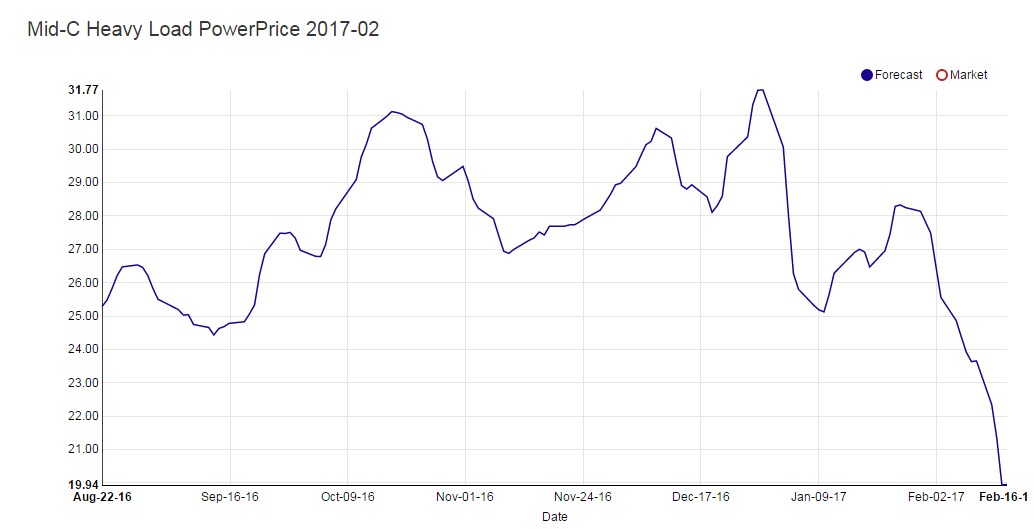 Falling off a cliff and is now below the market. Bear in mind, Ansergy uses 100% of the RFC 10 day; when they bump, we bump, and the forecast pukes. 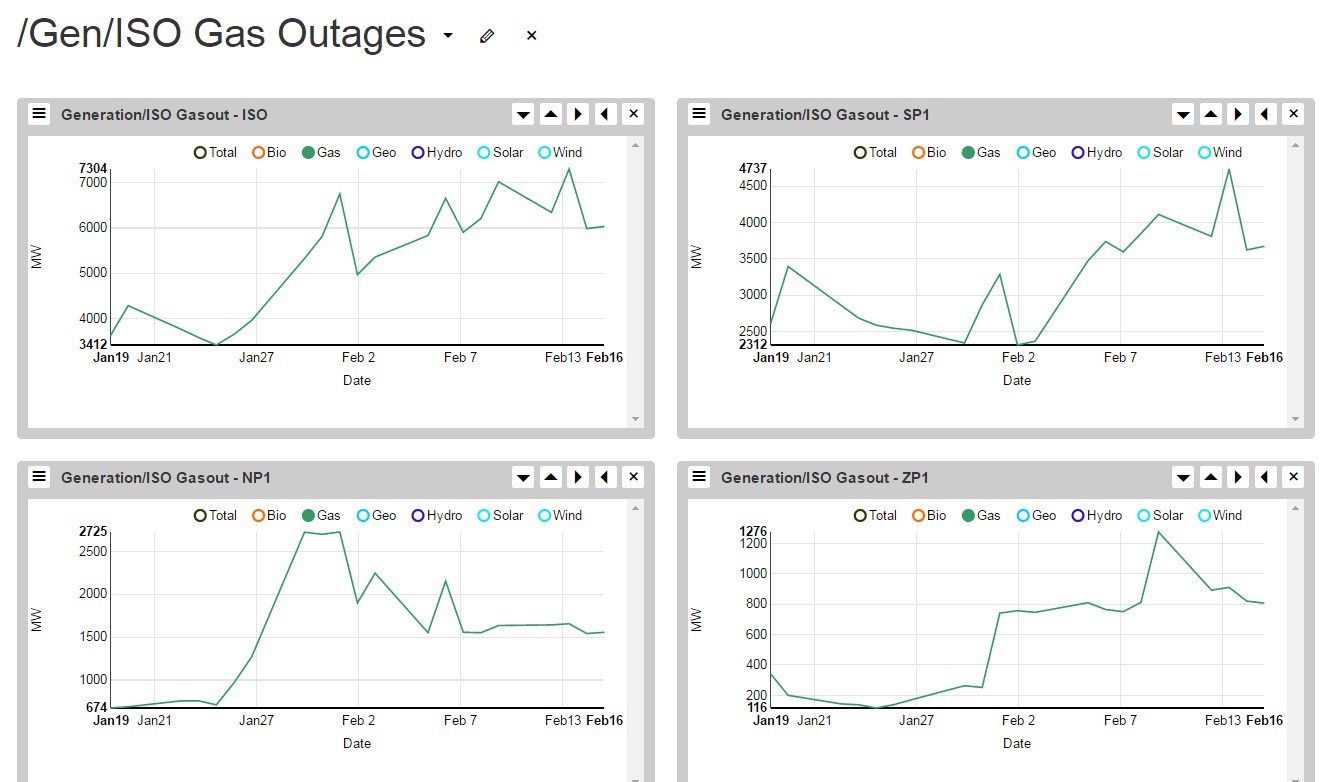 Outages are off a bit, more units returned than tripped.

Noms at MidC are in a freefall while Great Basin saw a small rally, so did PV…SPs fell. 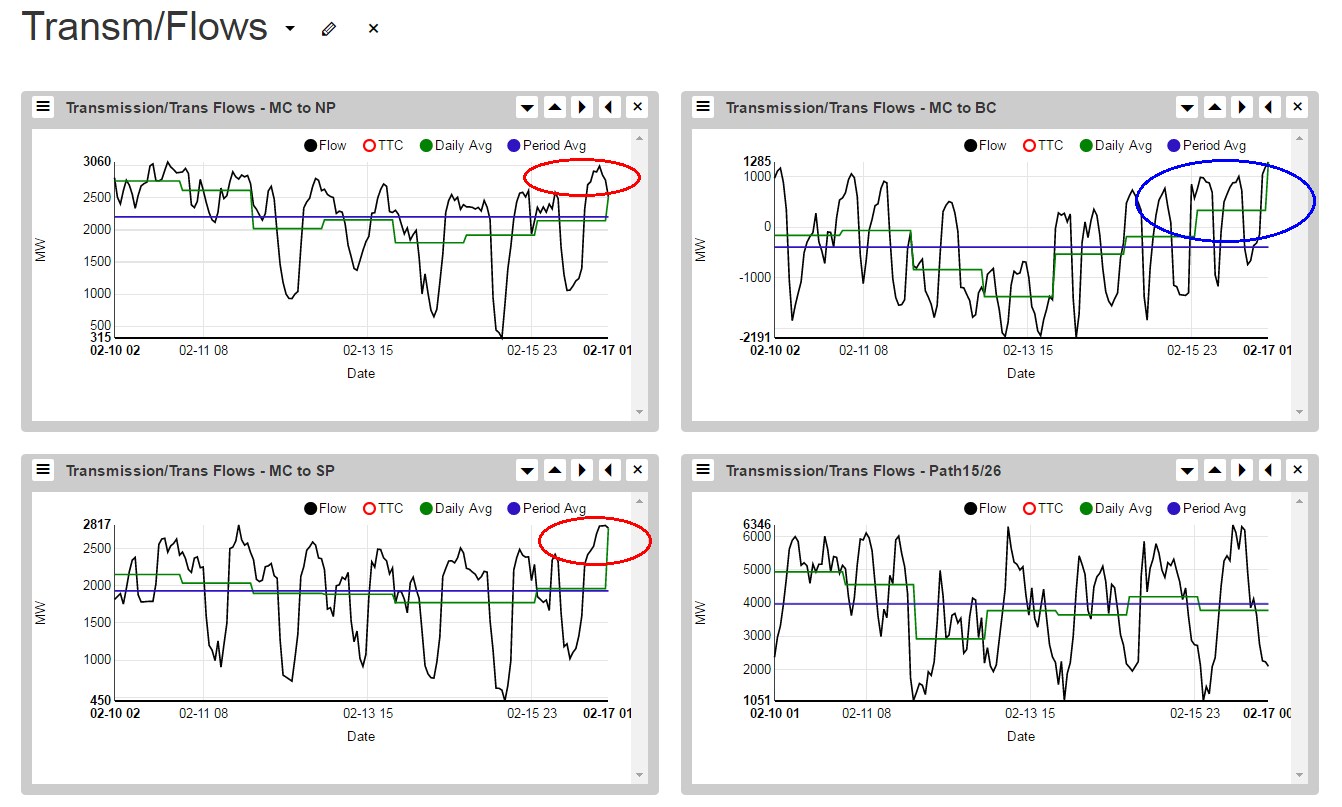 MidC is an exporting machine, both the AC and DC hit two-week highs; so did the Northern Intertie via exports INTO BC. Dirt cheap prices make for good buys.

Feb has fallen off a cliff, but with cooling weather and not many MWH left, we’ll keep our length. March is still above the market, and we’ll buy back the short in front of the cooling weather. April’s forecast remains above the market, but only because the RFC refuses to put any melt into that month, we’ll stay short.  Our June has fallen off a cliff, mainly because the STP has rallied so hard there but we’d still be short and would own the May: June roll.

A nuclear meltdown at SP which makes it that much easier to own; we’d be long everywhere we are short MidC

I’d be comfortable being long any of these periods, at current levels; I think the May looks interesting given the almost certainty of seeing 90s, and possibly 100s, for more than a few days then.

We still have the traditional view (by Month) in the Trade Rank folders, check them out.