SP15 loads are down 619 MW week-over-week, and haven’t showed a lot of variance this week.  Demand is up slightly (186 MW) year-over-year as of yesterday after being well below last year’s loads for the 13th and 14th.

Mid-C loads are well below last week with yesterday’s demand at more than 3000 MW less than seven days prior.  Despite that, loads are still significantly higher than last year to the tune of 2391 MW.  Demand peaked at 29869 MW on the morning of the 13th. 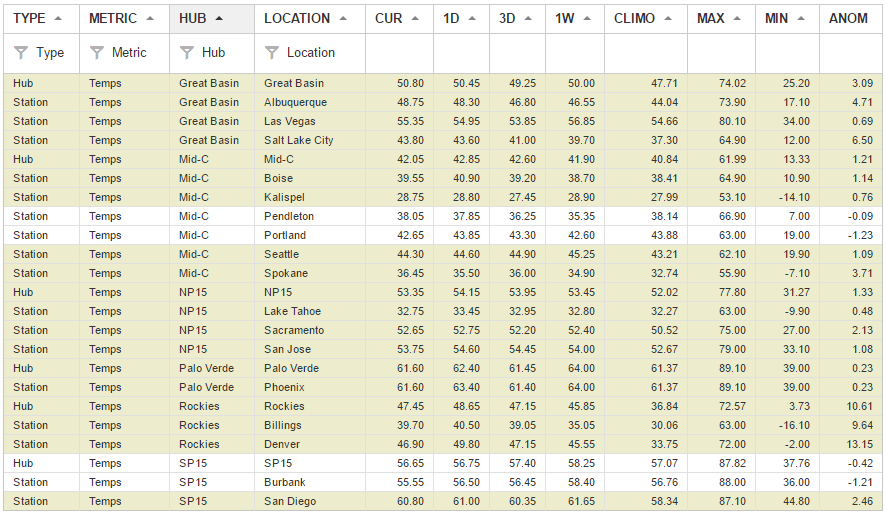 Warm weather is expanding into nearly all corners of the west as all but three stations (and one Hub) are forecast higher-than-normal aggregate temps over the next 10 days.  Denver continues to forecast with the highest anomaly (+13 degrees), while Salt Lake has increased its average temp significantly as well (+ 6.5 degrees). 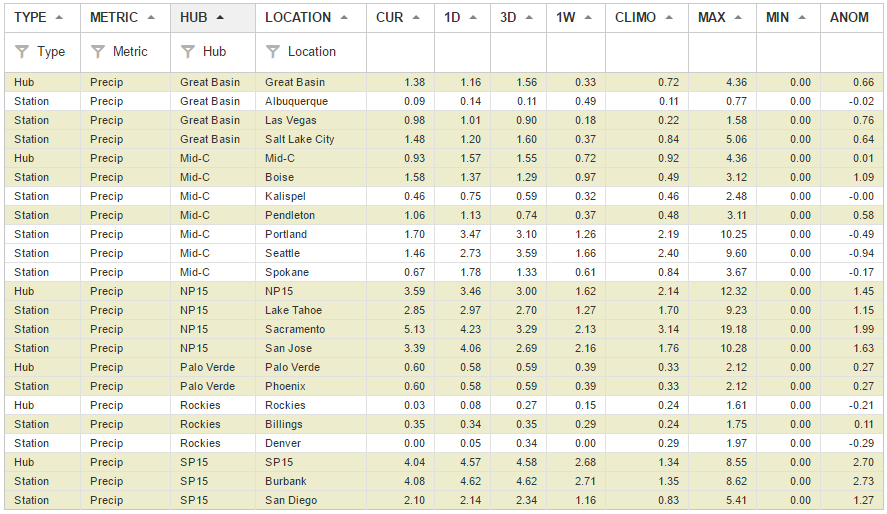 Wet weather should join the warmer than normal temperatures throughout the west, but looks to be mostly concentrated in California.  Burbank’s precipitation totals are slightly lower than forecasted earlier in the week, but will still be well above normal. 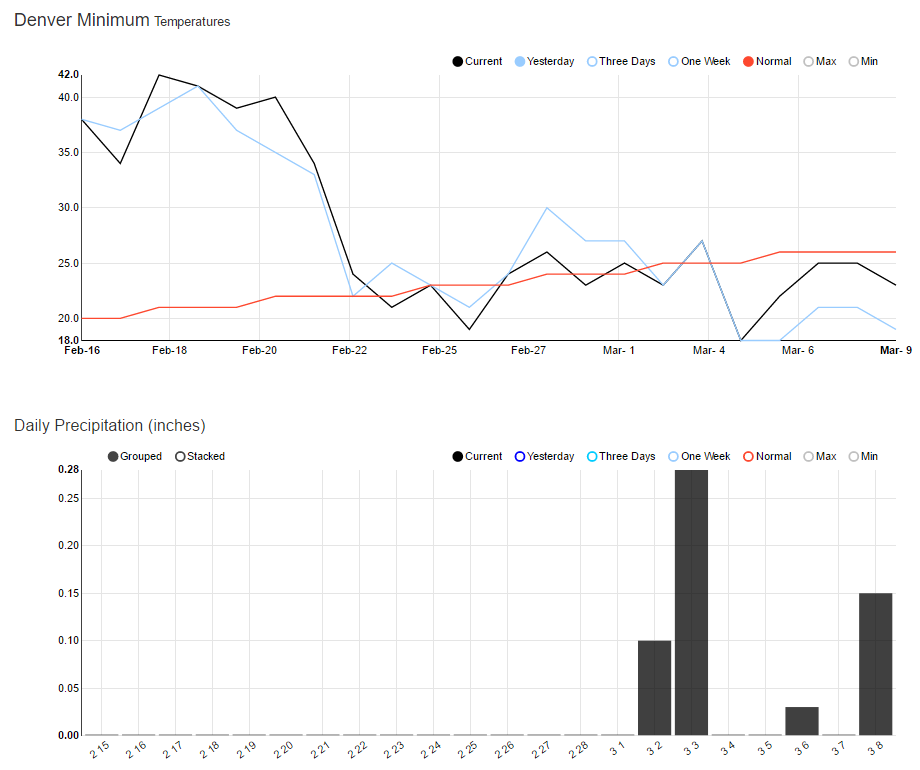 Denver’s mild weather has been adjusted a little warmer before falling back to normal by the 22nd.  Tomorrow should mark the warmest day with minimum temps 21 degrees above normal.  No precipitation is forecasted over the next week+. 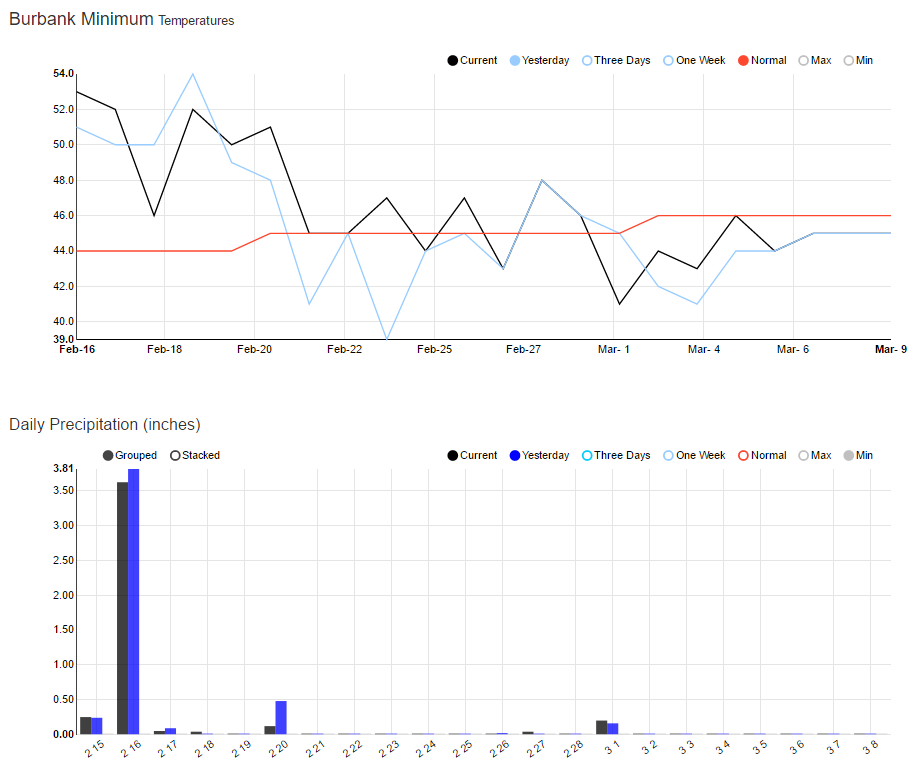 Burbank minimum temps should remain well above normal, though they have been adjusted a bit lower compared to yesterday’s forecast.  Precipitation has been decreased 0.2″, but is still forecasted for more than 3.5″ on a single day.

While minimum temps are well above normal, max temps are the opposite as they could fall eight degrees below normal by tomorrow.  Southern California weather will be mimicking a Northwest winter through the weekend. 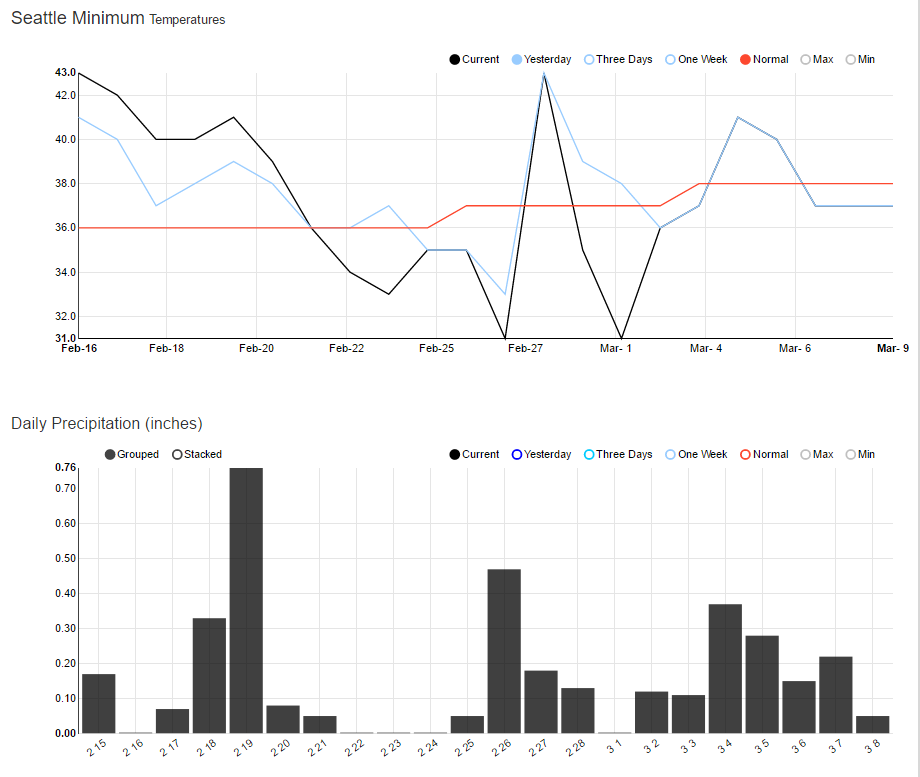 Speaking of the Northwest, Seattle should have mild and pretty damp weather through Wednesday of next week.  Min temps will peak today at seven degrees above normal, and precipitation will reach its max on the 19th with just over 0.75″ of rain.

Not much inter-day change in the 10 Day River Forecast, though it still remains well-above the STP forecast for each of the next 10 days, as well as above Tuesday’s forecast for all days leading up to the 24th.

Mild and wet weather has taken its toll on Mid-C the last couple days as its snowpack has fallen from 122% to 116%.  With snow levels rising, or at least holding, over the weekend, we could see snow take an even bigger hit. 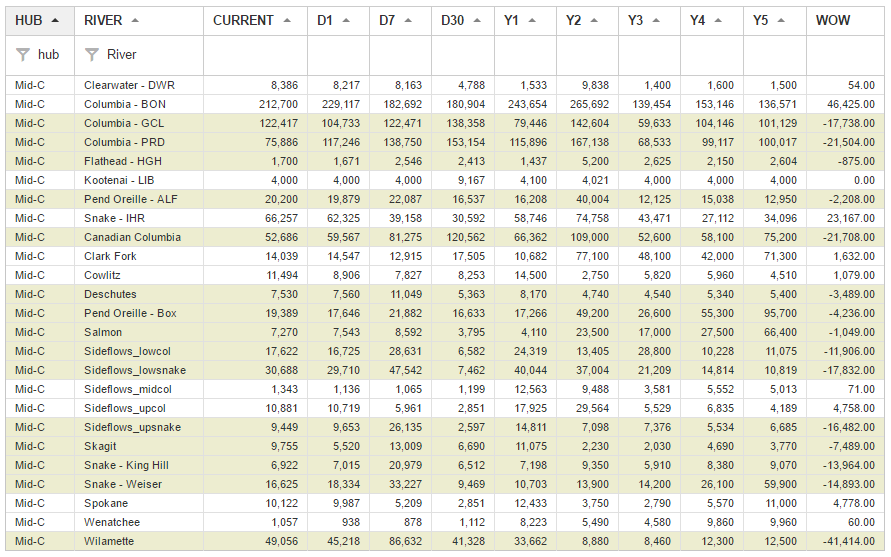 Taking a quick look at week-over-week change in river CFS and you can see low-level melt has been isolated to just parts of Eastern Washington as the Spokane River has nearly doubled over the last seven days.  Pend Oreille is holding steady comparatively.

All hubs other than  Stanfield (which is unchanged_ are up a few cents day over day.  El Paso non-Bondad showed the largest increase, though that was still only $0.03.  All hubs are significantly down from a month ago and relatively unchanged compared to last week.

Demand dropped in all hubs other than NP-15 where it increased nearly 8% day-over-day.  Great Basin had the largest day-over-day decrease with a drop of 11%.

940 MW of gas was added to outages yesterday, though nearly 1100 MW was added back today.  Hydro has continued to come back online as well after a peak outage on the 13th (from 766 MW to 533 MW today).