It’s ugly out there with just glimmers of bullish hopes, mainly in the cooling of the northwest, but that cool weather only delays an inevitable warming which will bring a big melting. It’s ugly but will get uglier.  What caught our eye over the last couple days was the strong rally on the Spokane, a typically irrelevant small river, but at runoff season a harbinger of things to come:

The river has doubled its output in a week; a week that wasn’t that warm, while its big sister river, the Pend Oreille, didn’t rally as much:

It’s up too, but not as much as the Spokane, which merely suggests how much water is poised to enter Coulee once it finally warms up; but before that happens things will cool down.

Spokane, the city, drops back to the teens while Kalispell enjoys the single digits. These lows will arrest the melt, flows across the Mid-C will back down some, loads will rally some, but behind that event, a reversion to the mean occurs and the averages get warmer each day, and the melt will grow as will river flows. 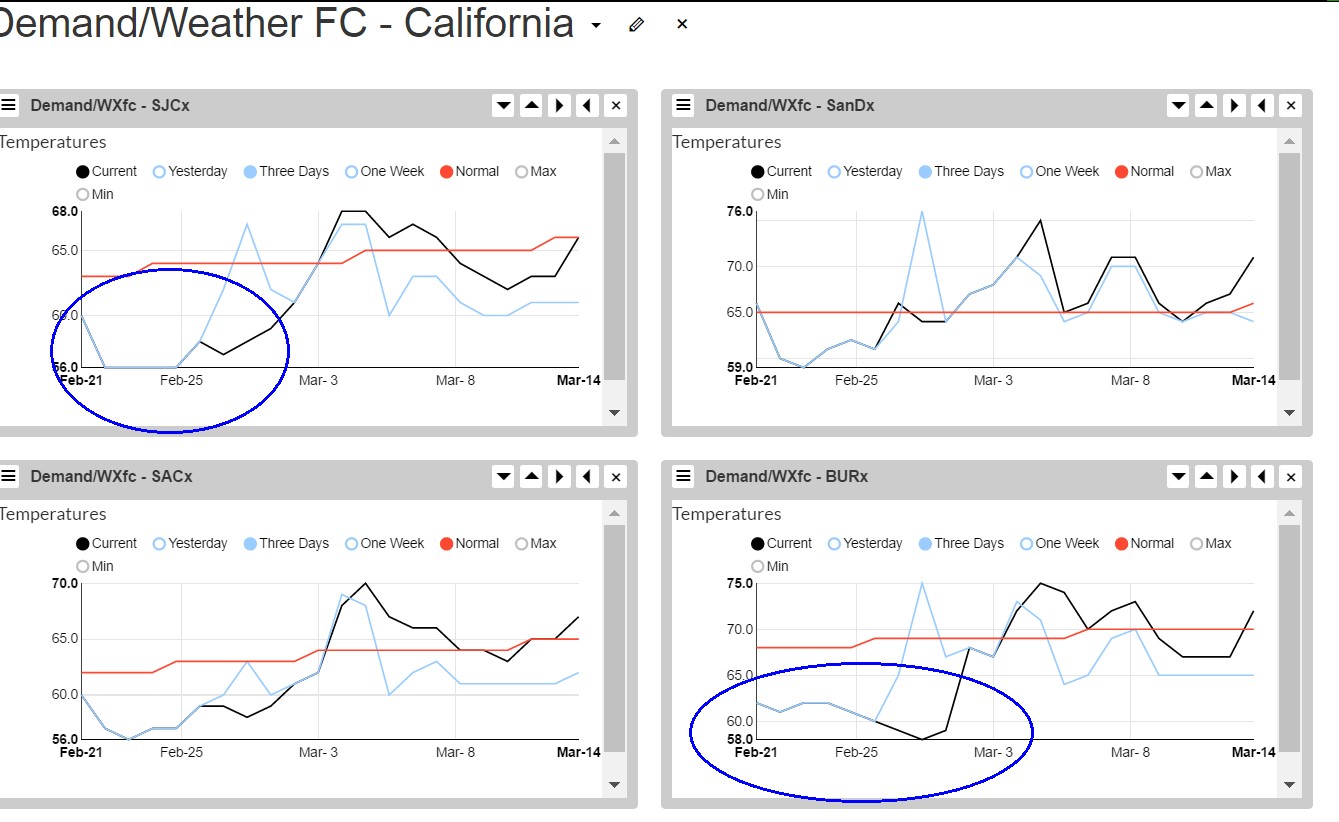 California is cool, too, which will increase loads, but not much. 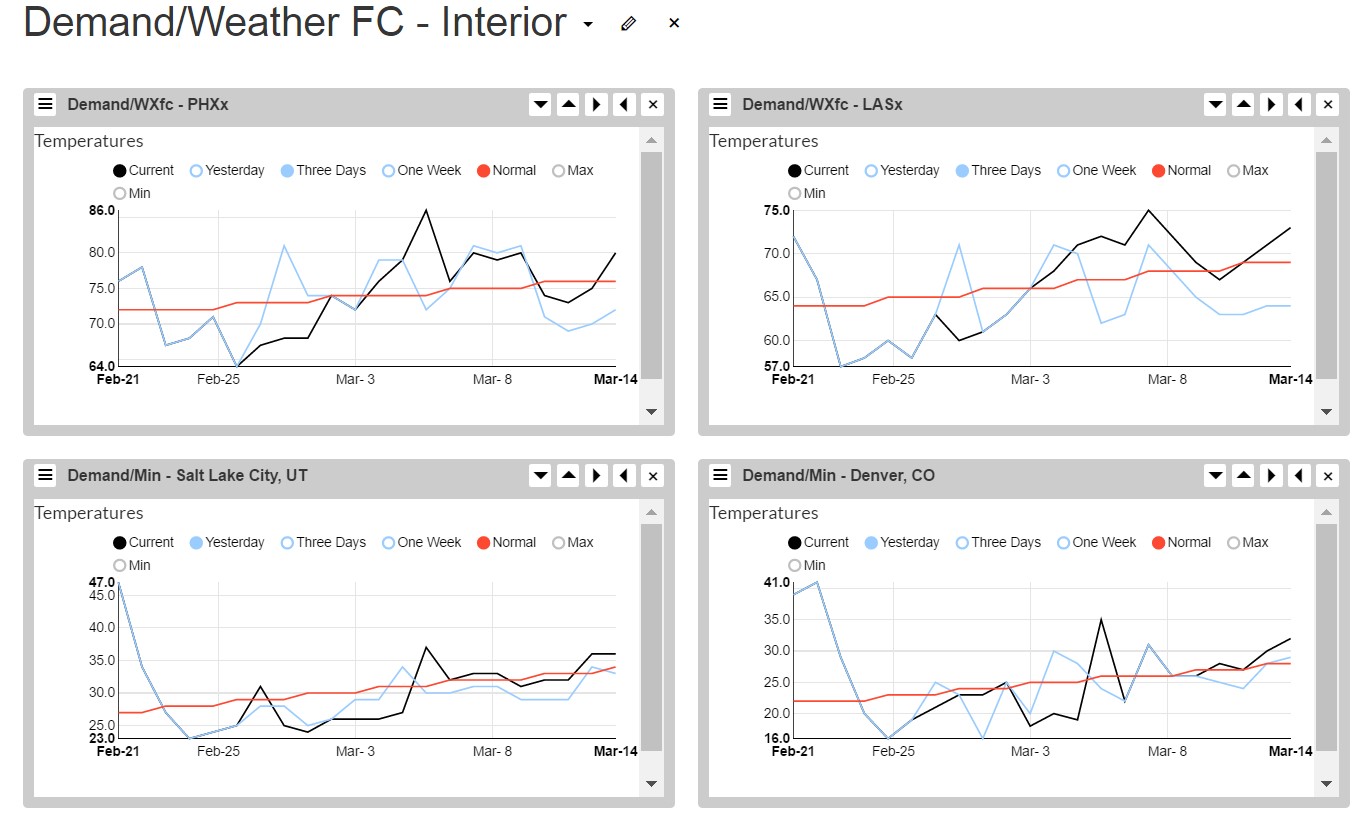 The interior WECC is also cool for a few days and will also warm up, which will trigger some AC load in the desert cities.  Loads, meanwhile, are near season lows, or at season lows:

MidC is off 3000 MW from last week but bear in mind yesterday was a holiday; they’d still be off from last week if it weren’t a holiday. The rest of the WECC is just low and should rally this week off of that cool weather.

That cooling trend will save BPA some grief as it struggles to draft Coulee: 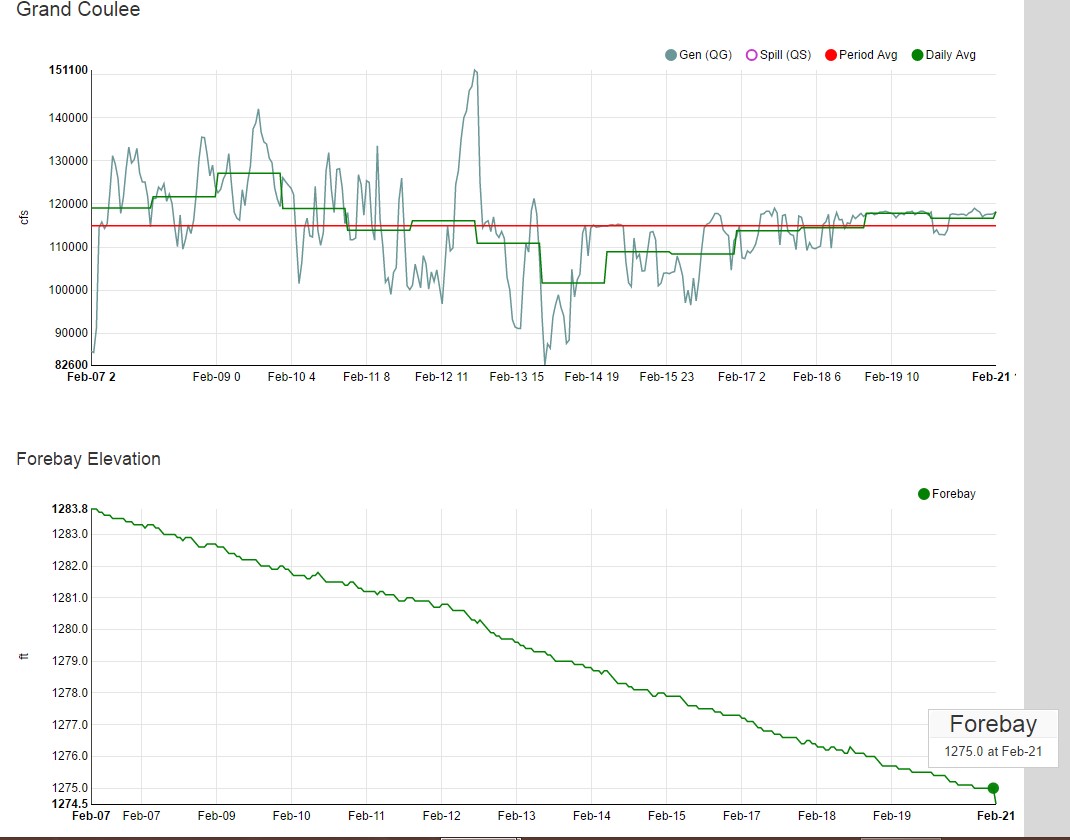 The feds have pulled 8 feet in 14 days leaving the 20 feet to go in 21 days; pretty linear like the above chart.  As long as inflows don’t change it shouldn’t be a problem, but inflows have changed,  there is an additional 20kcfs inflow between the Spokane and the Pend Oreille. If this week would have been warm, not cold, they’d be dealing with an additional 40kcfs, or maybe 60kcfs, while they drafted; then they’d have a problem. As it stands now, BPA lucked out with this week’s cold weather.

Flows out of BON are off the charts, hitting 270 kcfs yesterday. Most of those incremental flows are coming from the Snake, up over 50kcfs in the last month. Also, note the Sideflow Index for the Mid-Columbia streams hasn’t budged, and those are sitting on near-record snowpack. The melt hasn’t begun on the eastern Cascades and when it does the plant operators need to brace for another 30-40, maybe 50, kcfs of unregulated water.

Where last week we saw a very dry 11-20 day, today we see a modestly wet one. Nothing epic, just more precip coming which will just add to the build of an already big water year.

Meanwhile, California finally gets some relief, a respite from a year for the record books.

The latest water supply outlook for April-Sep at TDA is 100% of normal and should hold that level given the precip outlook. 100% normal isn’t normal, however. Take a look at this table: 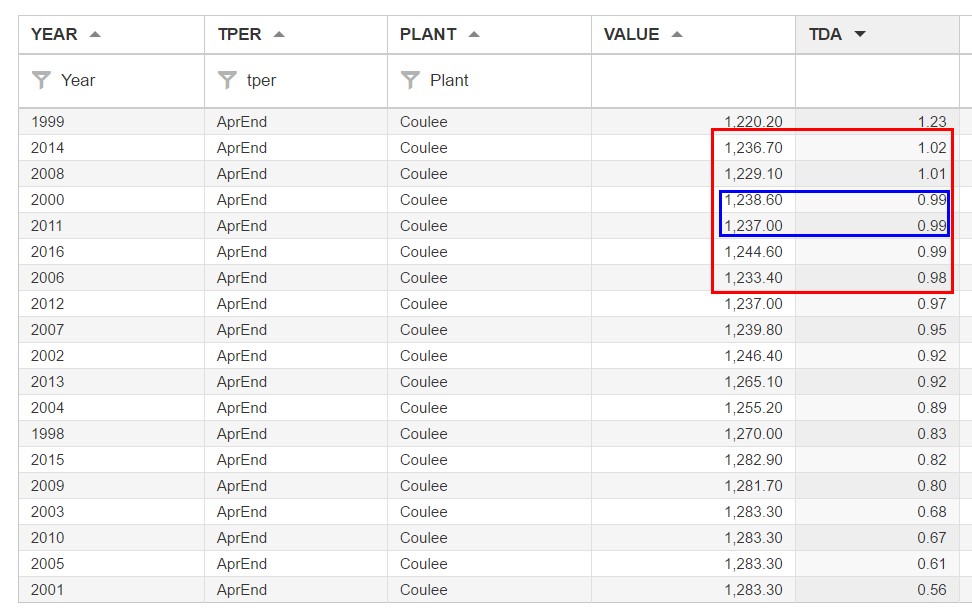 This is a summary of past flood control drafts given a TDA water supply. First note how few years were 100% or higher, 3 out of 18 were that high. Then note how deep the drafts were for all years north of 95% normal – most were in the 1230s – and contrast that with this year’s draft of 1252′. Huh? This is a big water year that isn’t being treated as a big water year. We’re pretty confident that once BPA reaches 1252, they will keep drafting. Where April was given a pass, it will soon bear the brunt of this new draft, not to mention the rapid increase in natural river flows from a melt that hasn’t started anywhere but on the Spokane. It’s ugly.

We know it’s been bearish on our forecast; all of this water has pounded $7.33/mwh out of that forecast over the last month. Could it get lower? We don’t think BOM can, not with a cooling which will abate the melt and add to load. But all that does is defer the inevitable ugly into March and beyond.

Nothing much to report on the Gen front; all the nukes are running; Cal ISO has very little new outages nor many returns. The gas noms say it best:

Great Basin, MidC, Palo, and SP are all at lows.

The ISO had a couple of new gas units come offline over the weekend and not much returned. 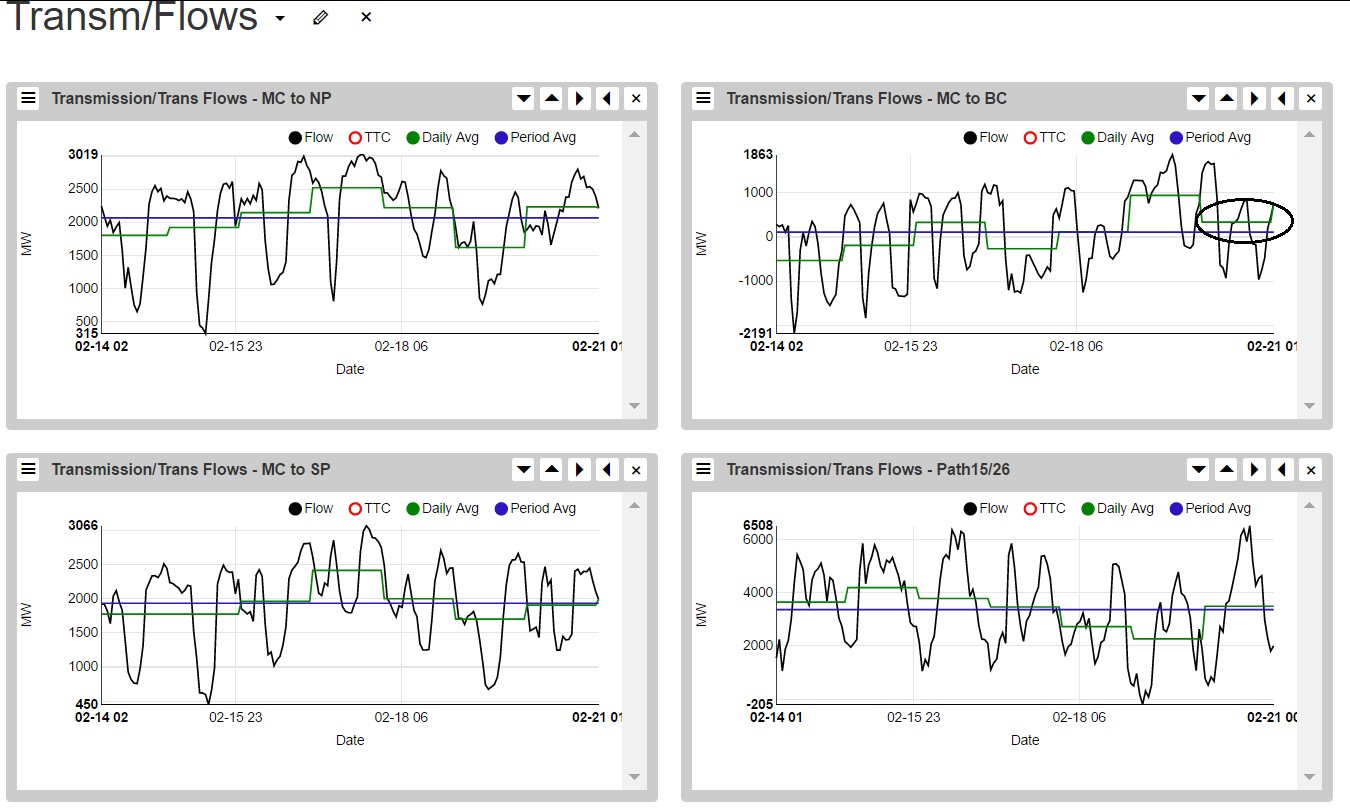 Nothing has changed on the transmission front, either. The Northern Intertie is mostly unused, flows into California remain modestly robust.

And next month there are several AC derates, down into the 2000 MW zone. Ugly