After peaking at 91% on February 3rd, the Grand Coulee reservoir has dropped back down to 89% capacity as of the 7th.  This decrease marked the end of a nearly three week build up in capacity.

89% capacity for Grand Coulee is considerably higher than each of the previous three water years.  From ’14-’16 in order:  76%, 73%, 84%.  With heavy snowfall in the basin over the past weekend, and a looming warmup toward the end of the week, will be worth keeping an eye on how GCL responds to what could be a moderate low-level runoff.

Heavy precipitation over the weekend has pushed many NP15 rivers well above normal cfs flow.  All listed rivers aside from Pit are running at more than 10 times the flow from the same day last year.  The Consumnes has the largest annual increase with more than 20x growth in cfs, and 118x more than five years ago.

Though the Consumnes has the most eye-grabbing numbers, it’s worth noting the Pit River is also marking a several year high, as demonstrated in the chart above.  The Pit reached it’s highest point at 8147 CFS on the 7th. 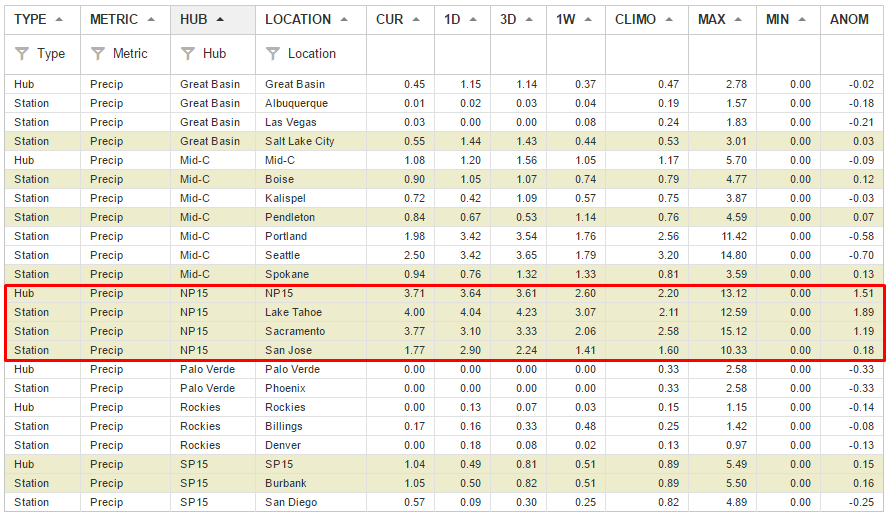 There is plenty more precipitation on its way toward NP15 over the next ten days as the selected cities are all expected to receive more than twice the typical amount.

Mid-C week-over-week loads remain mostly unchanged with an increase of just 98 MW, though demand increased heavily by the end of the week, and yesterday’s demand would fall close to 3000 MW short of last week’s peak.  Year-over-year demand is largely up from last year as yesterday finished with a peak of nearly 2000 MW higher than 2016.

NP15 demand mirrors Mid-C loads for most of the past week.  Last week’s demand peaked on the 1st at 16,705 MW and steadily declined until yesterday where loads reached 16,464 MW.  Year-over-year demand is up nearly 1,000 MW. 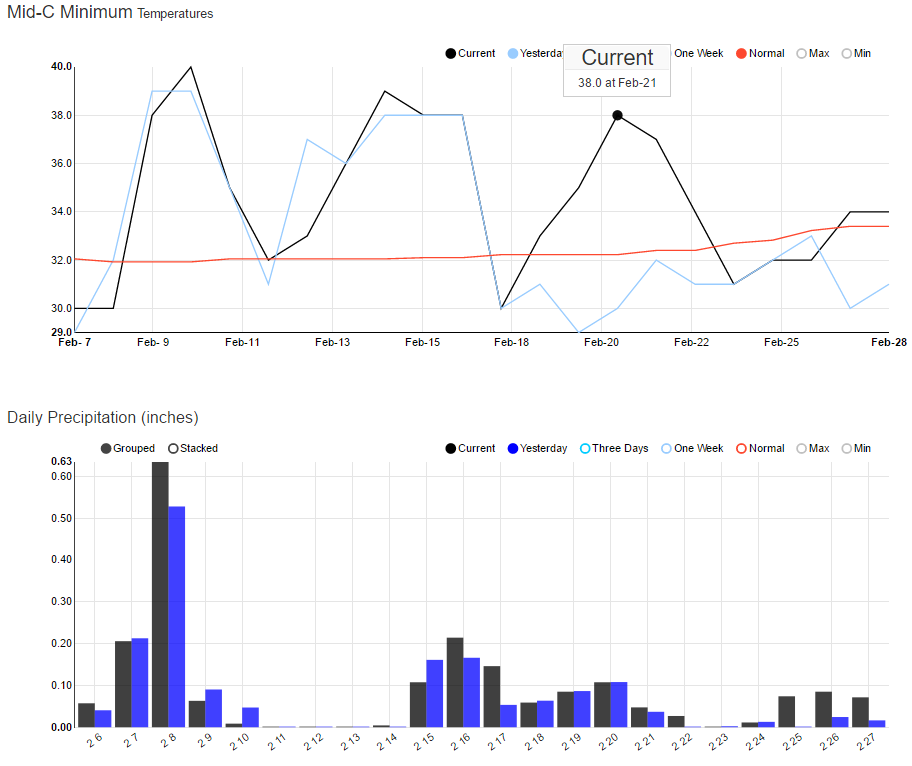 Wet and mild weather is just a day or two away from hitting Mid-C as temps are expected to reach 8 degrees above normal by the end of the week after dumping more than 0.6″ of precipitation.  Warmer weather is forecasted for next week as well, though significant precipitation isn’t yet in the forecast. 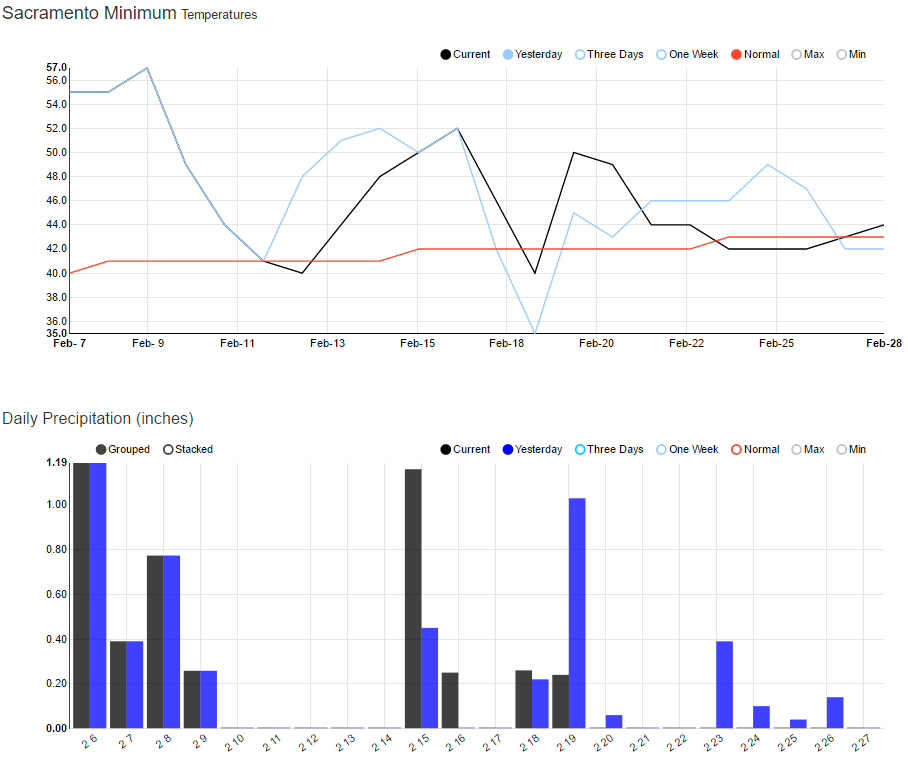 NP-15 precipitation was mentioned earlier, but worth noting the mild temperatures that are joining the rain.  Minimum temperatures should reach a peak of 57 on the 9th, or 16 degrees above normal.  Max temps will only be a couple degrees higher.  The small temperature variance will stick around for a couple more days.

Warmer than normal weather looks like it will be hitting most of the west at the same time, and Phoenix is no exception.  Max temps should reach 82 degrees on both the 9th and 10th, each of which will be 12 degrees above normal.  Temps are forecasted to remain above normal for close to 10 days.

Week-over-week demand is down in all hubs, especially Great Basin where gad demand decreased nearly 20%.  SP15 is the only hub with a significant increase in year-over-year gas demand as its seen a 13% increase. 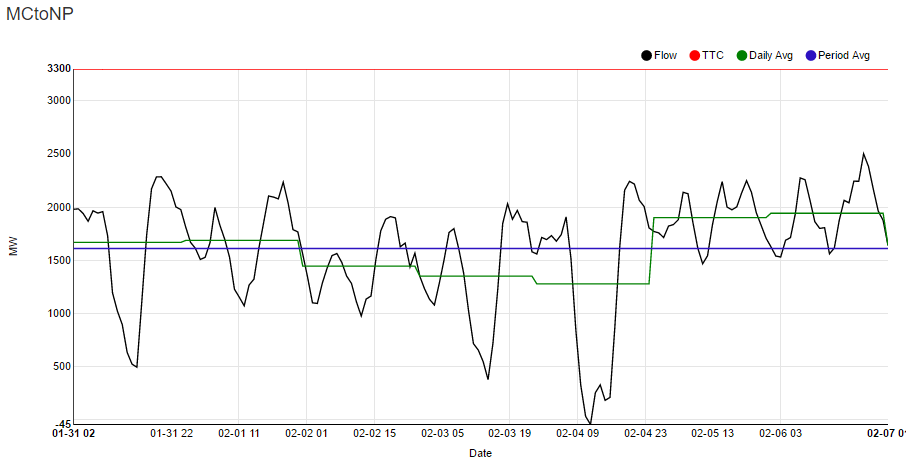 TTC has held stead at 3300 MW for more than a week straight, though flow has fluctuated quite a bit in the same time span.  We saw flow briefly move north on the 4th (noon) at -45 MW before jumping back to 2243 MW eight hours later.  The daily average marked its seven day high yesterday at 1943 MW. 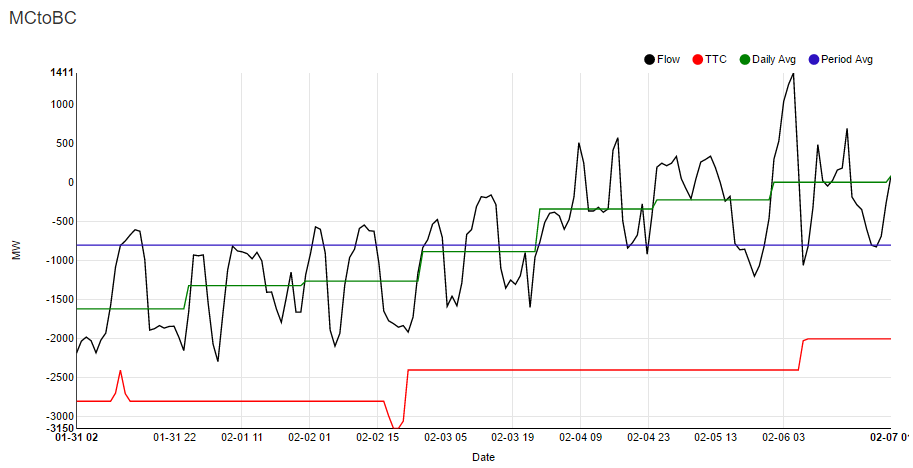