We left off our first post a shade on the bullish side, driven by colder weather. Like all sentiments, the buy/sell decision needs to be relative to market price. Today, we’ll look at the front of the curve, BOM and Prompt. The trades to be discussed today are in the following APT order.

Each subsequent chart can be accessed by clicking the chart icon to the far right. You can also pull them down directly from the TradeRank reports. 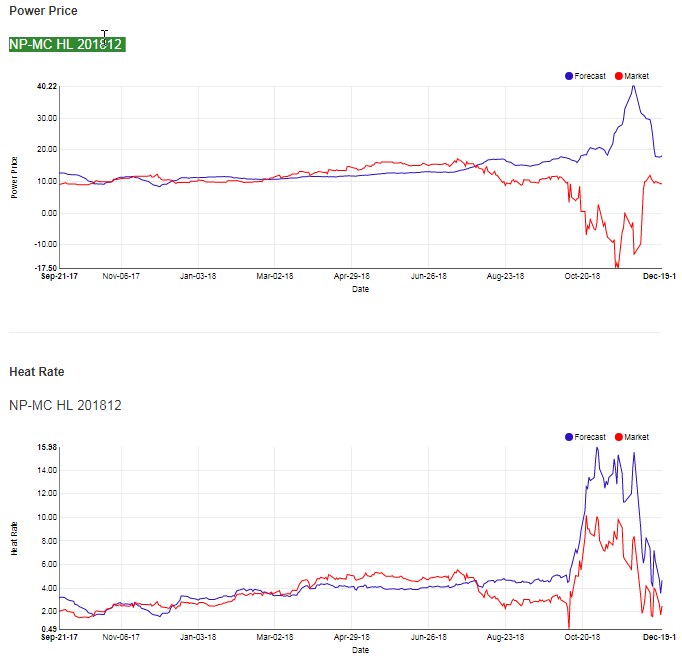 First up, the spread between NP and MidC for BOM. This was cheap during the pipeline / Sumas crisis, now its flipped to NP premium by nearly $10. Given Sumas is still trading premium to PG&E citygate the spread feels rich. Offsetting that sentiment are the increased flows into Sumas at the US border; nevertheless, a cold event in the Northwest could be more bullish than a cold event at NP. This is BOM, just ten days left; we’d take out a flyer and SELL the spread. 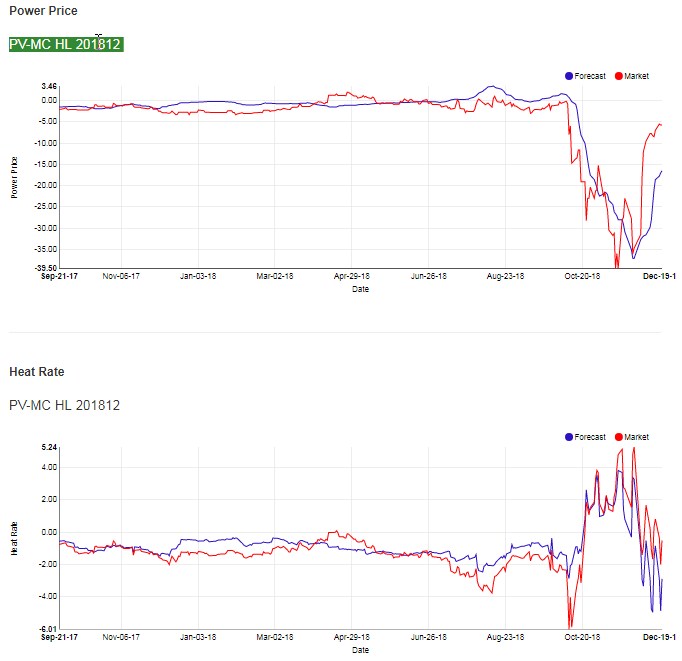 This spreads Palo against MidC, a dubious virtual given no direct transmission between the two, but for those creative gamblers its worthy of a look. This was dirt cheap while Sumas was on life support, now it is just cheap but, for the same reasons as NP, we’d sell it (Sell Palo, buy MidC). 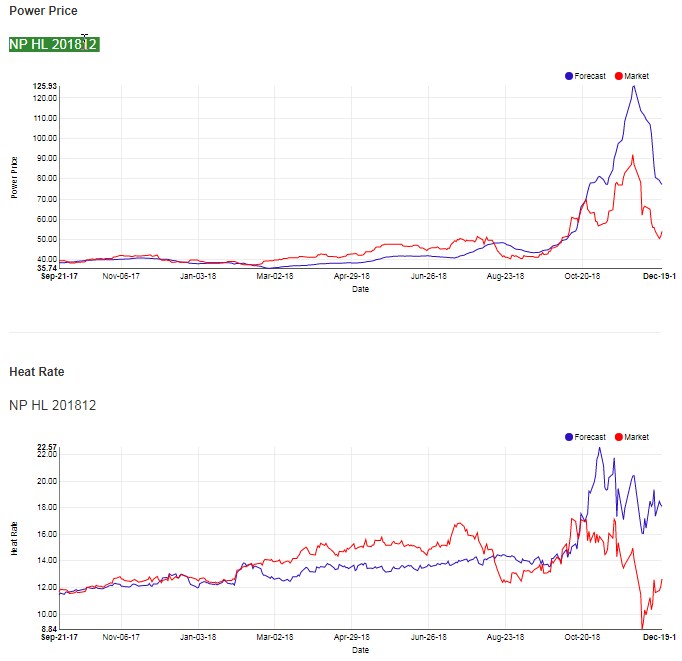 NP’s Dec heat rate was silly cheap a few weeks back, it has rallied off of that, but we’d suggest there is more room to move up. With cold weather approaching, we are BUYERS. 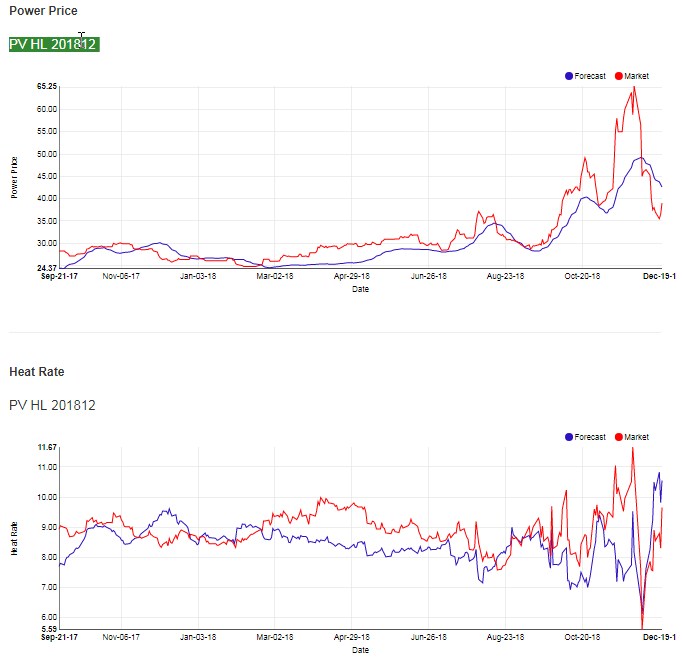 The Palo heat rate has fully recovered, the price is still above the one year average, and we aren’t so bullish we’d go long everywhere.  PASS. 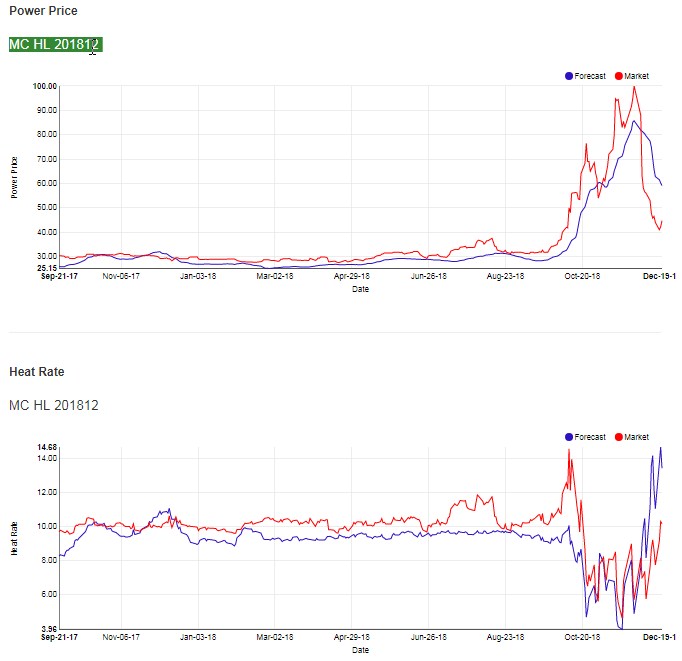 Cheapish heat rate, modest PP that just posted a reversal of a two-week long slide … on the cold weather, and going into a long weekend… BUY 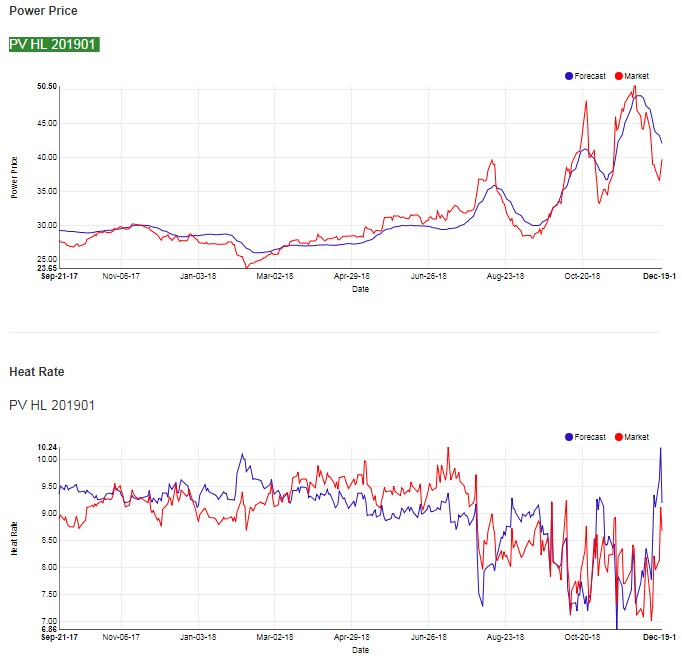 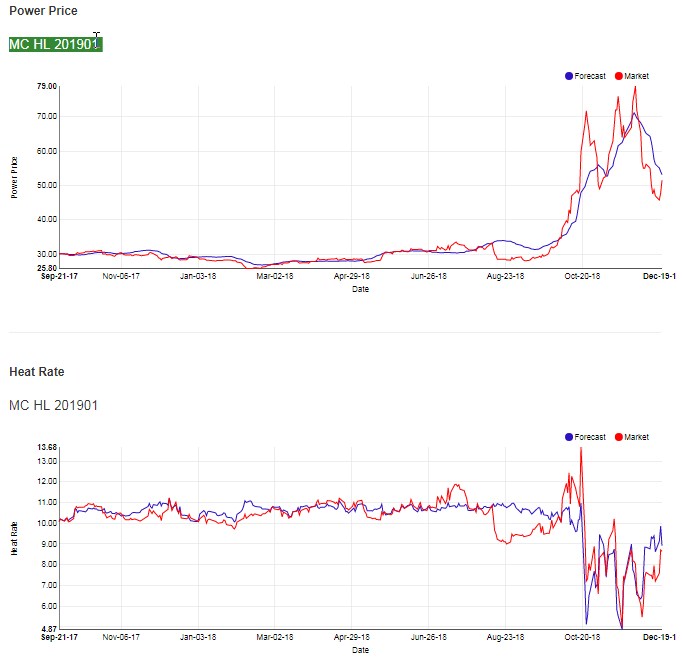 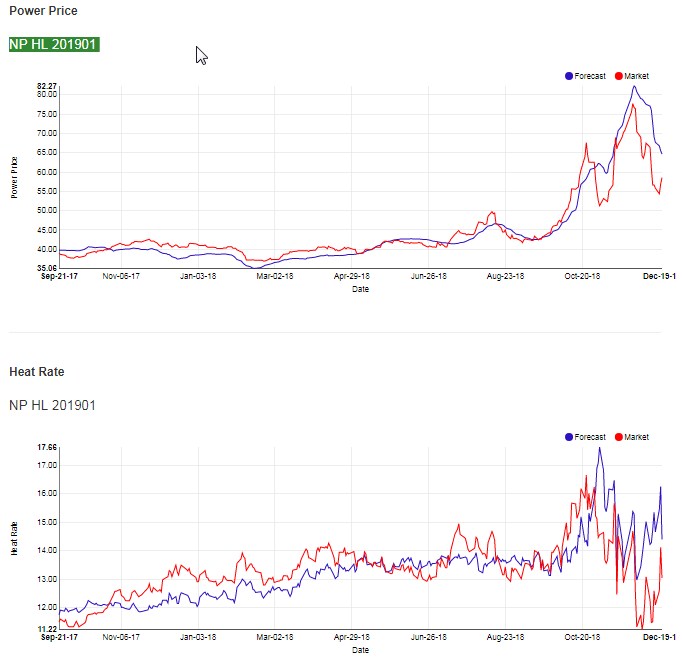 When trading off of cash, which is what we’d be doing by buying BOM off of cold, you may as well do the same thing in the Prompt, especially when it is the 20th of the month. So, all of those Dec sentiments … press Repeat. 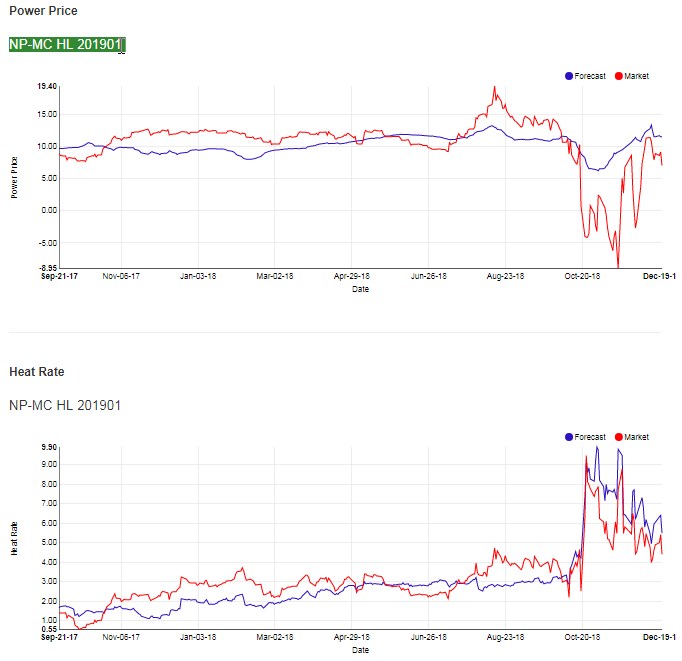 If we sold the BOM NP-MC, we probably wouldn’t do the same with Jan. Our fear here is water in the Northwest. BPA will begin drafting again to serve the incremental cold-driven load, that will leave Jan longer than otherwise. Plus, if the cold is a headfake, we’d not want a book too directional over the multi-holiday span, plus liquidity will be an issue.  BUY 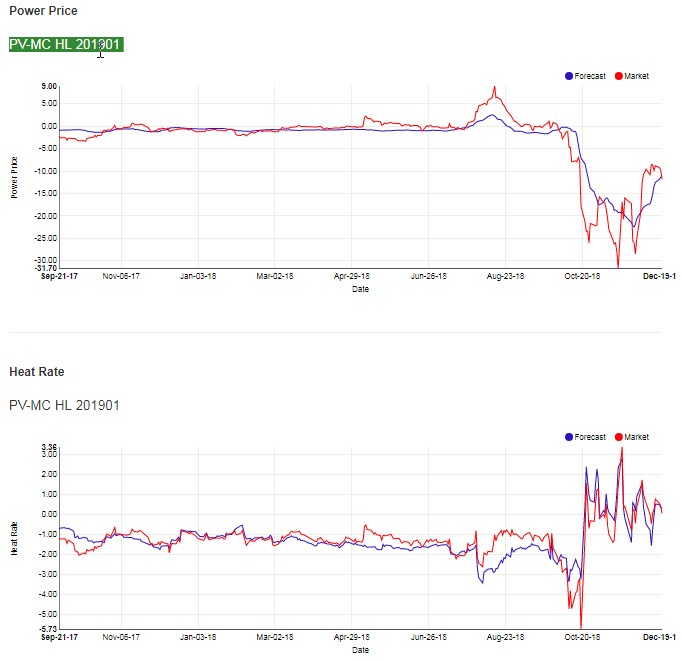 The spread’s heat rate is more pricey than not, but the power price is still on the cheap side. Plus, PV sees massive LMP congestion into SP … SELL 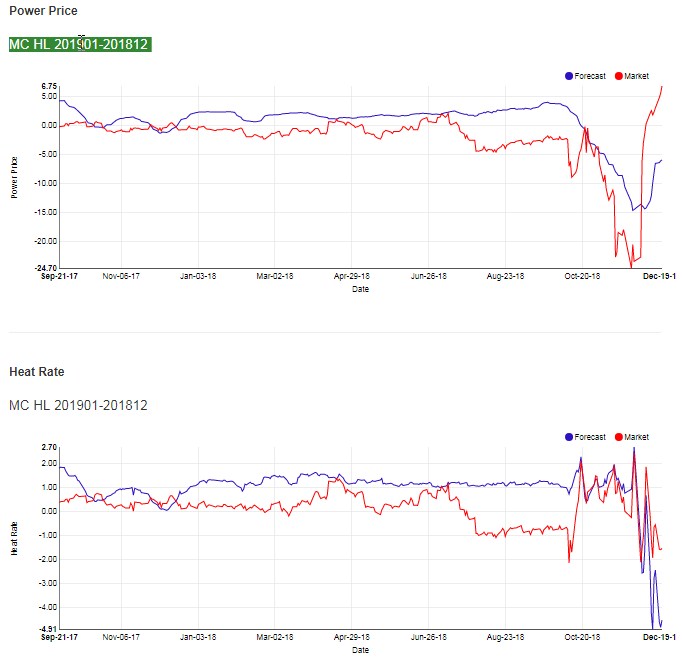 We already said we’d mimic our Prompt with the BOM sentiment, but let’s look at the rolls. The MidC PROMP|BOM is now at a contract high – HUH? Where this was trading $-30 a month ago, now Jan is premium. Makes no sense in front of a cold forecast… We’d short this for size. 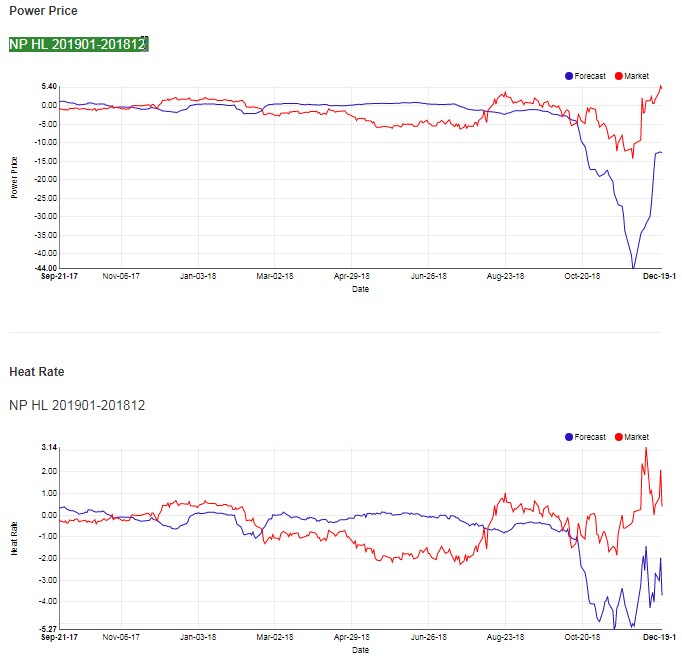 The NP never got stupid-priced like MidC because PG&E Citygate isn’t Sumas; still, the roll is at a contract high, and Sacto and its minions will be cold over the holidays… SELL 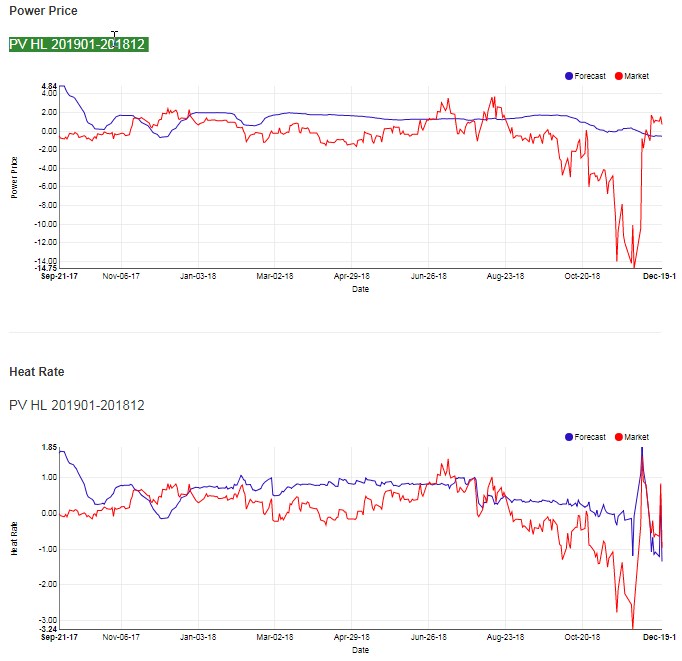 Why not, sell this roll too off of problems in the ISO over the holidays.