The news de jour is the west has been growing colder for a week straight; now it’s growing dryer, too. 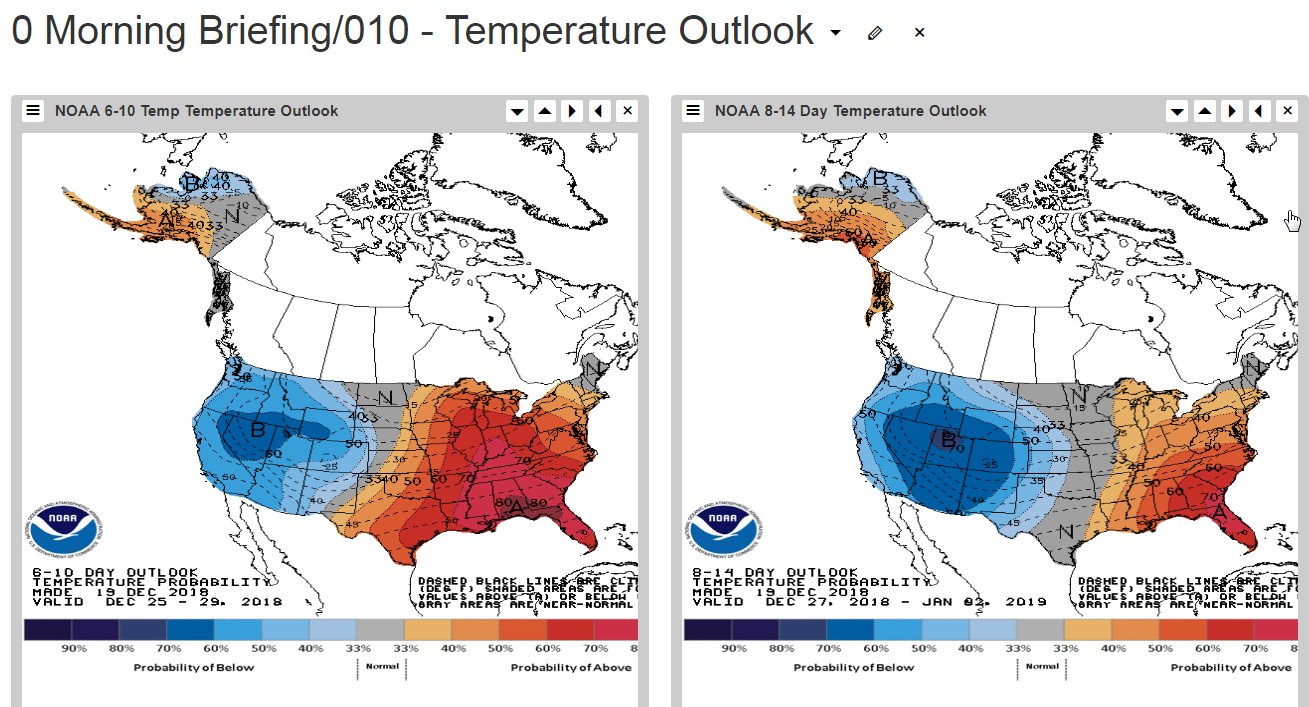 Mostly the interior, but the anomaly spills into the load-center coastal regions. Power and gas loads will be remarkably higher throughout BOM and possibly spill into Jan. 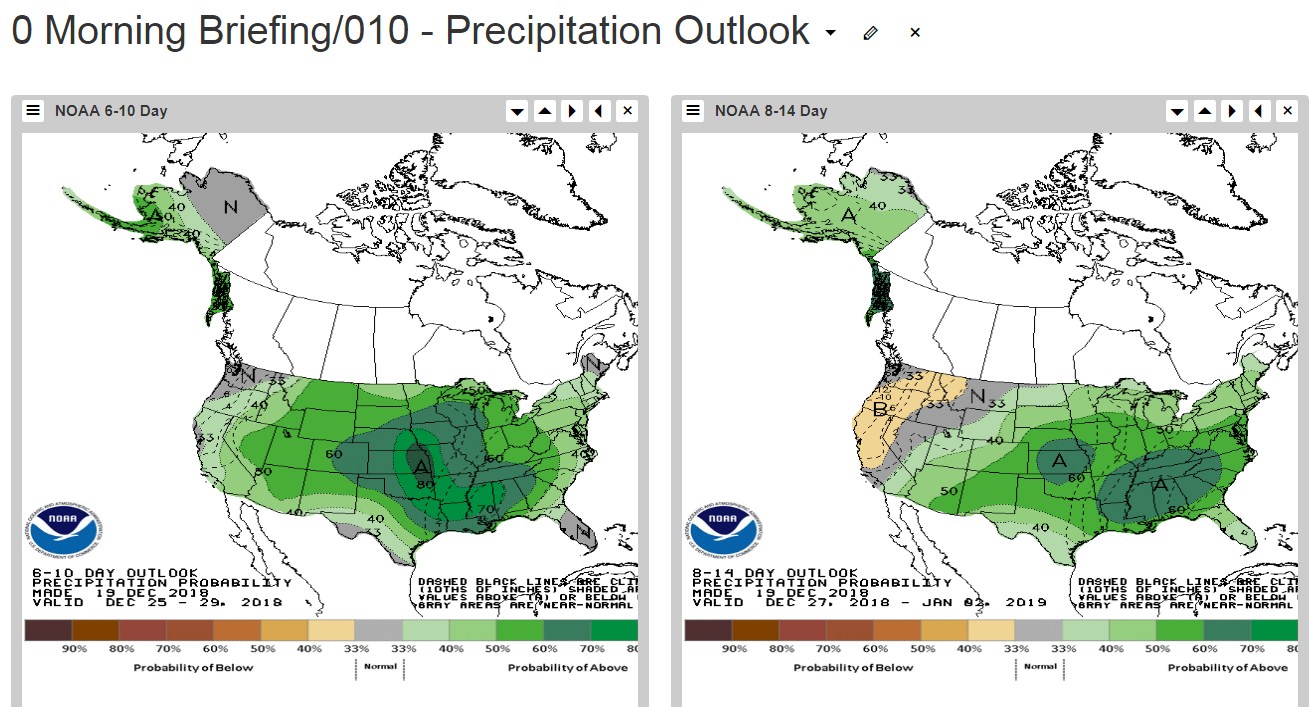 Dyer, too, after three weeks of above average precip, now the NW and Cal have a negative anomaly. Makes sense, high-pressure cold blocks the storms; rare you get both wet and cold. Both forecasts are bullish, though it’s the demand we’re more interested in. 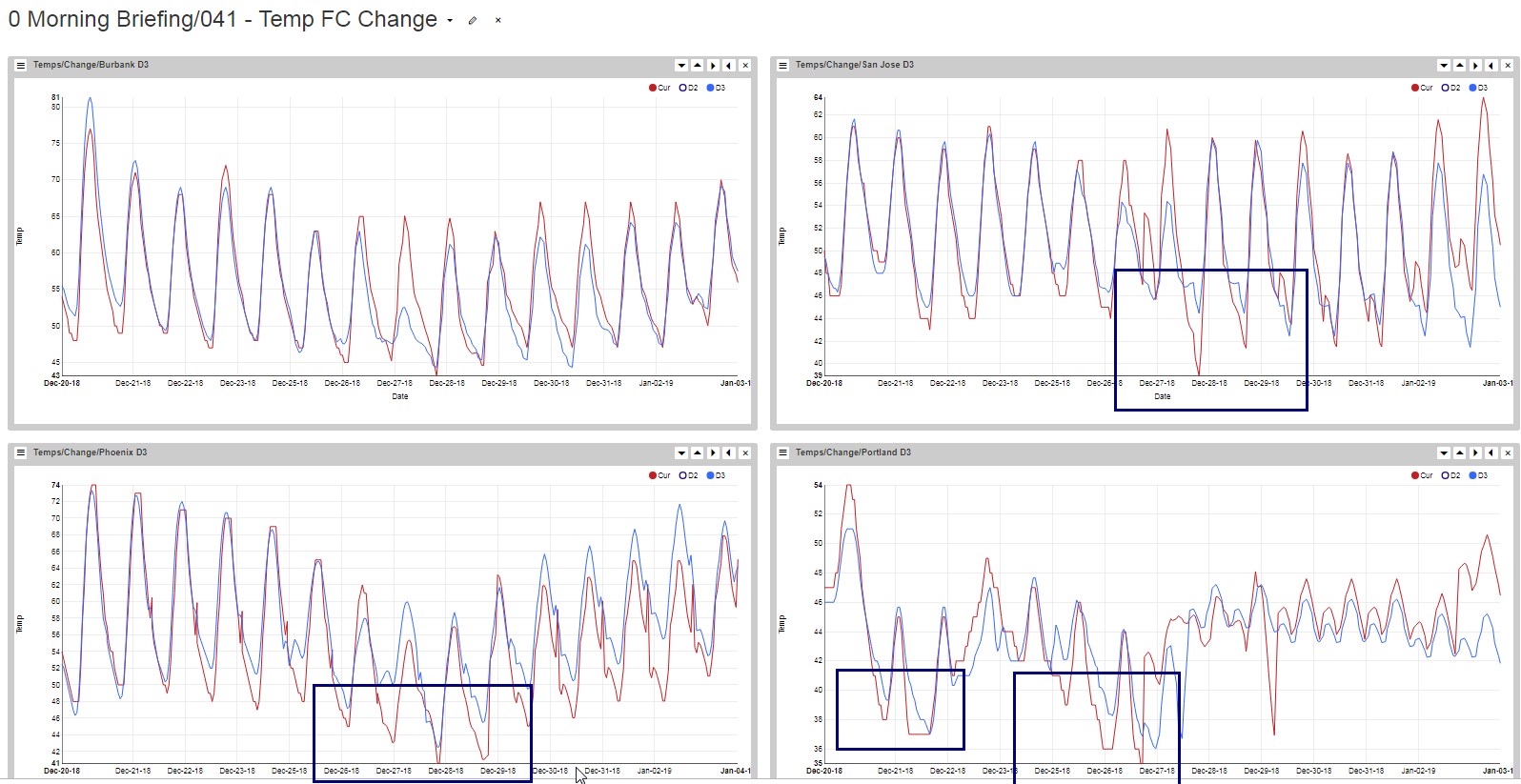 For the record, these hourlies are not “cold,” they are just colder, but the trend is to walk down the temperatures and should that  continue, then it may just get cold. Don’t expect panic; the system is healthier today than three weeks earlier. The warm wet allowed both gas and hydro storage to recharge, plus the Northwest is no longer threatened by the Westcoast pipeline explosion impacts. WEI will increase flows as needed; if it gets bitter cold, the pipe will flow 100%.

Spot gas is off but still relatively strong; recall, last year on the same day Sumas had $2.00 handle; almost every hub is $1.00 or higher than last year. With cold, these spot prices may move yet higher, at least the ones in California. 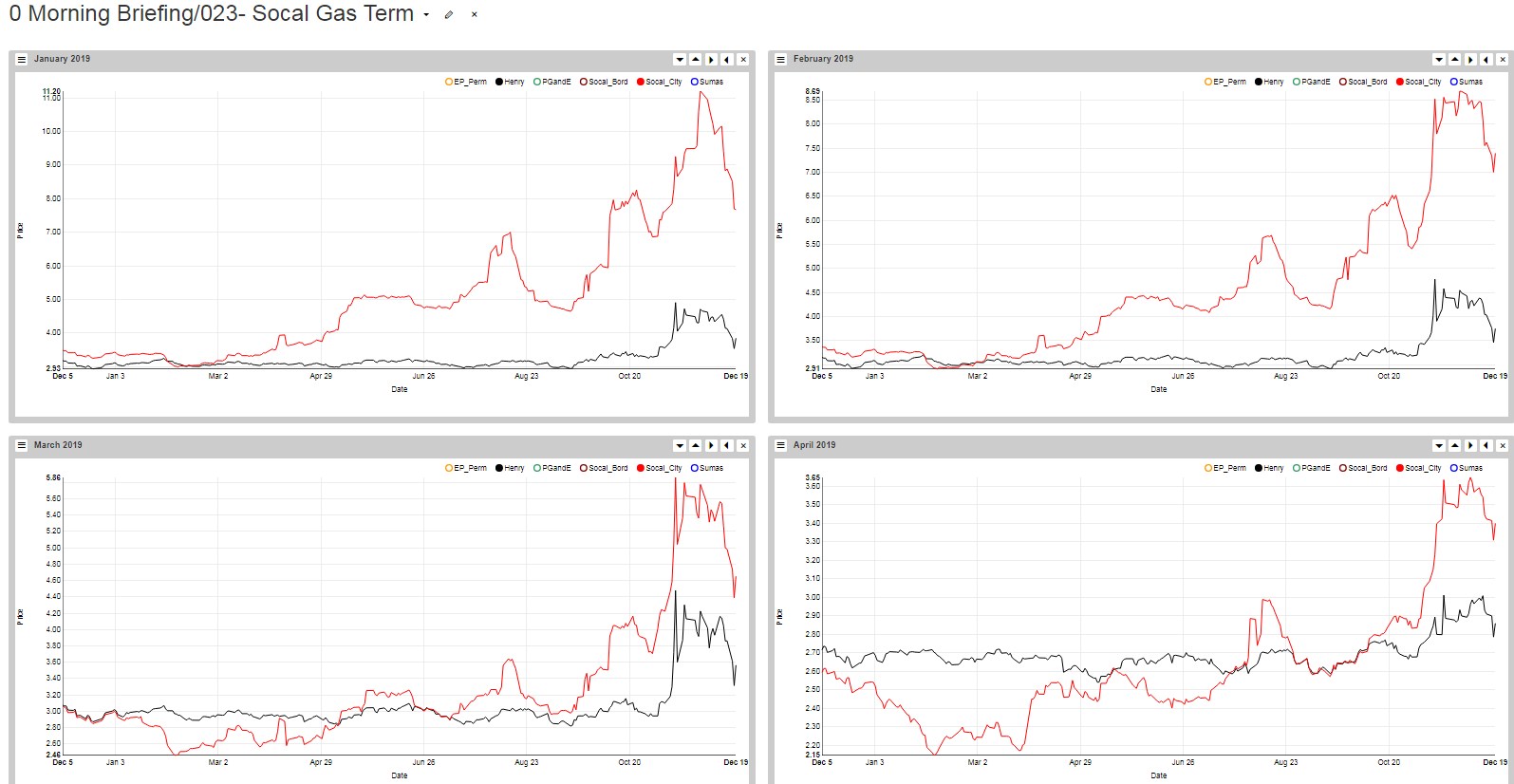 Citygate term markets found a bottom, at least a temporary one, but we’d suggest that small bump yesterday was more Nymex-driven that Socal. 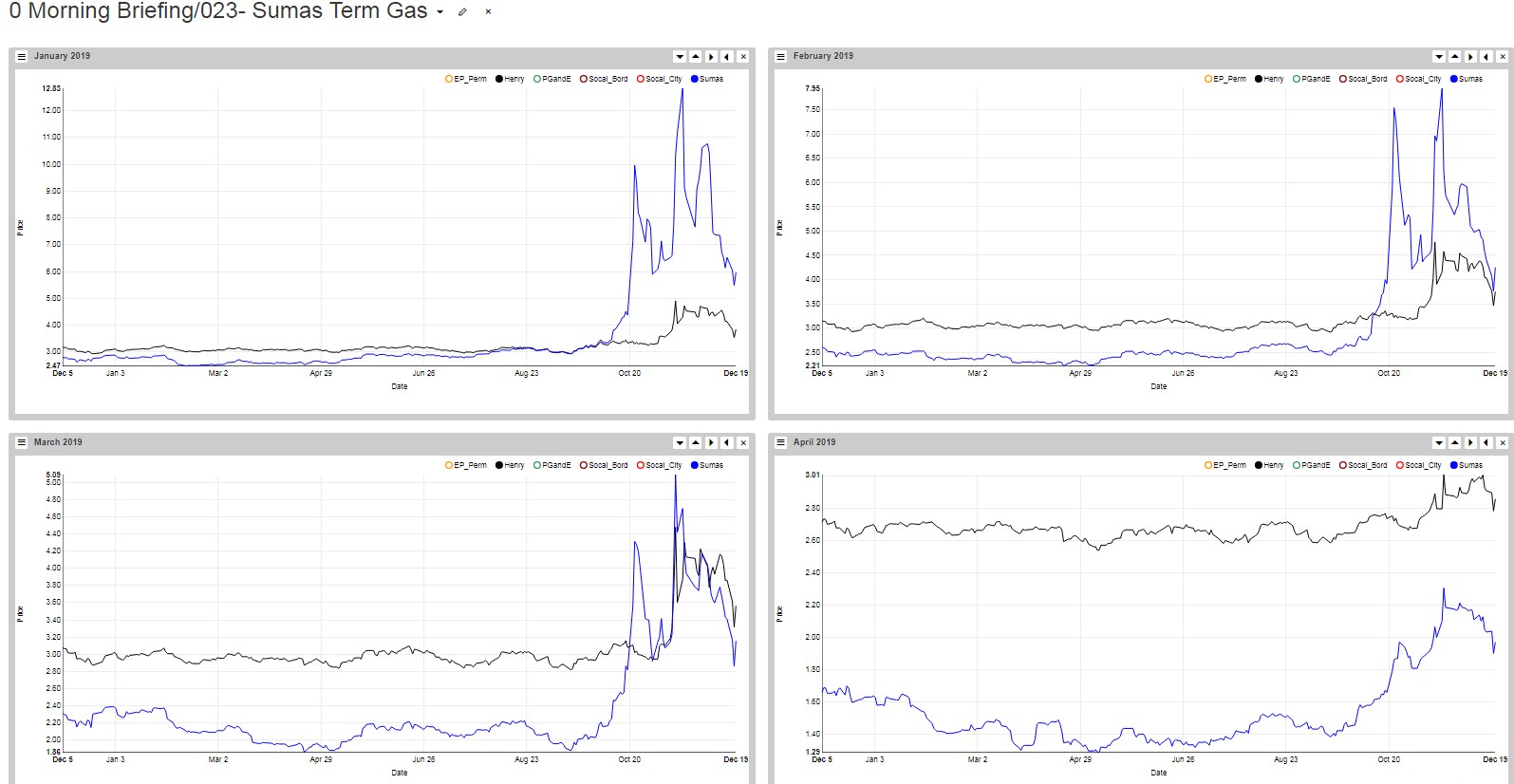 Sumas mostly just continued its slide back to reality; the market has the Feb contract beneath Henry, a sign pointing to a complete return of Westcoast’s capacity. That said, cold weather will support the prices, then they’ll slide more until basis reverts to its mean. 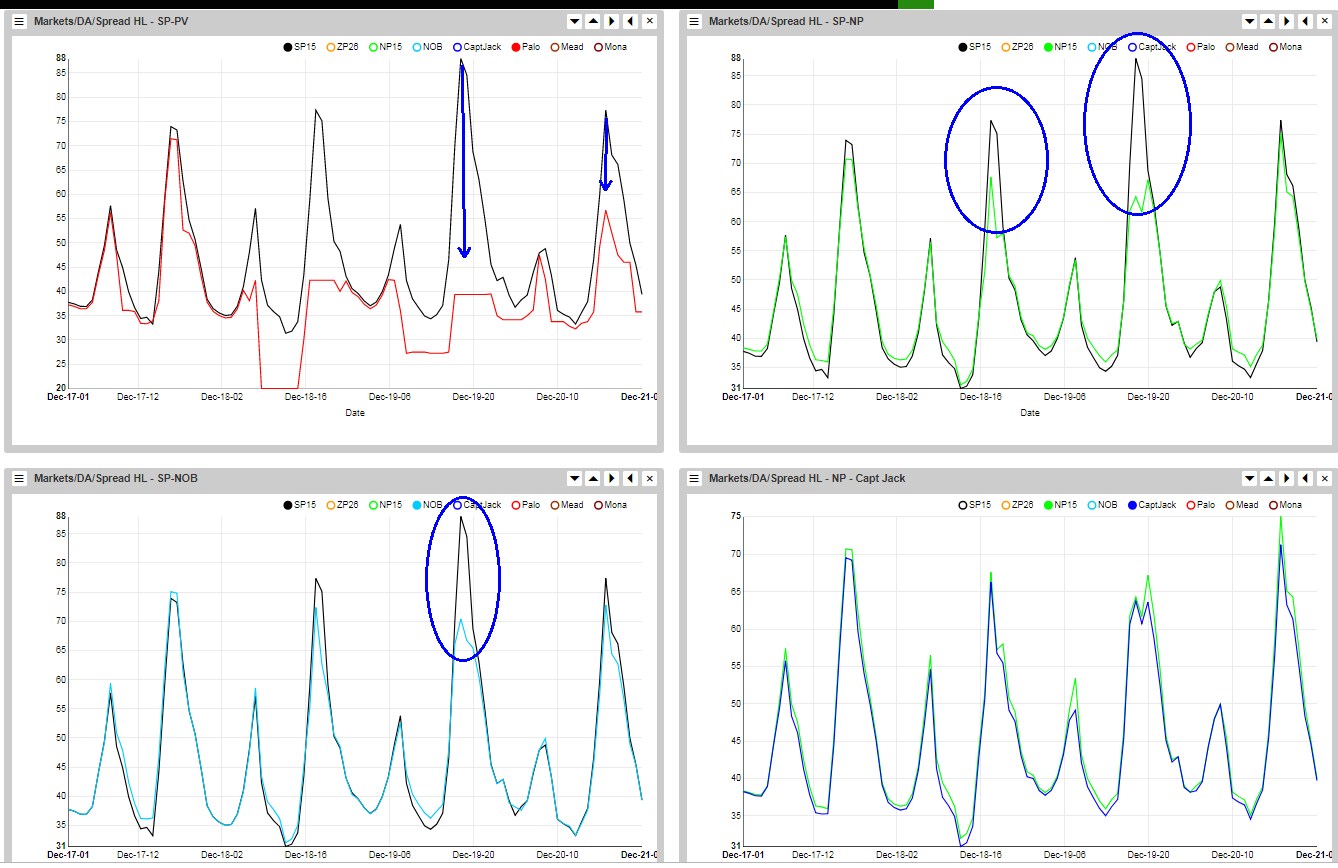 Hey, here’s a rally! LMP spreads against SP blew out over the last few days at all three points. Mostly, this is a reflection of the gas spreads; there is nothing bullish going on inside of SP. 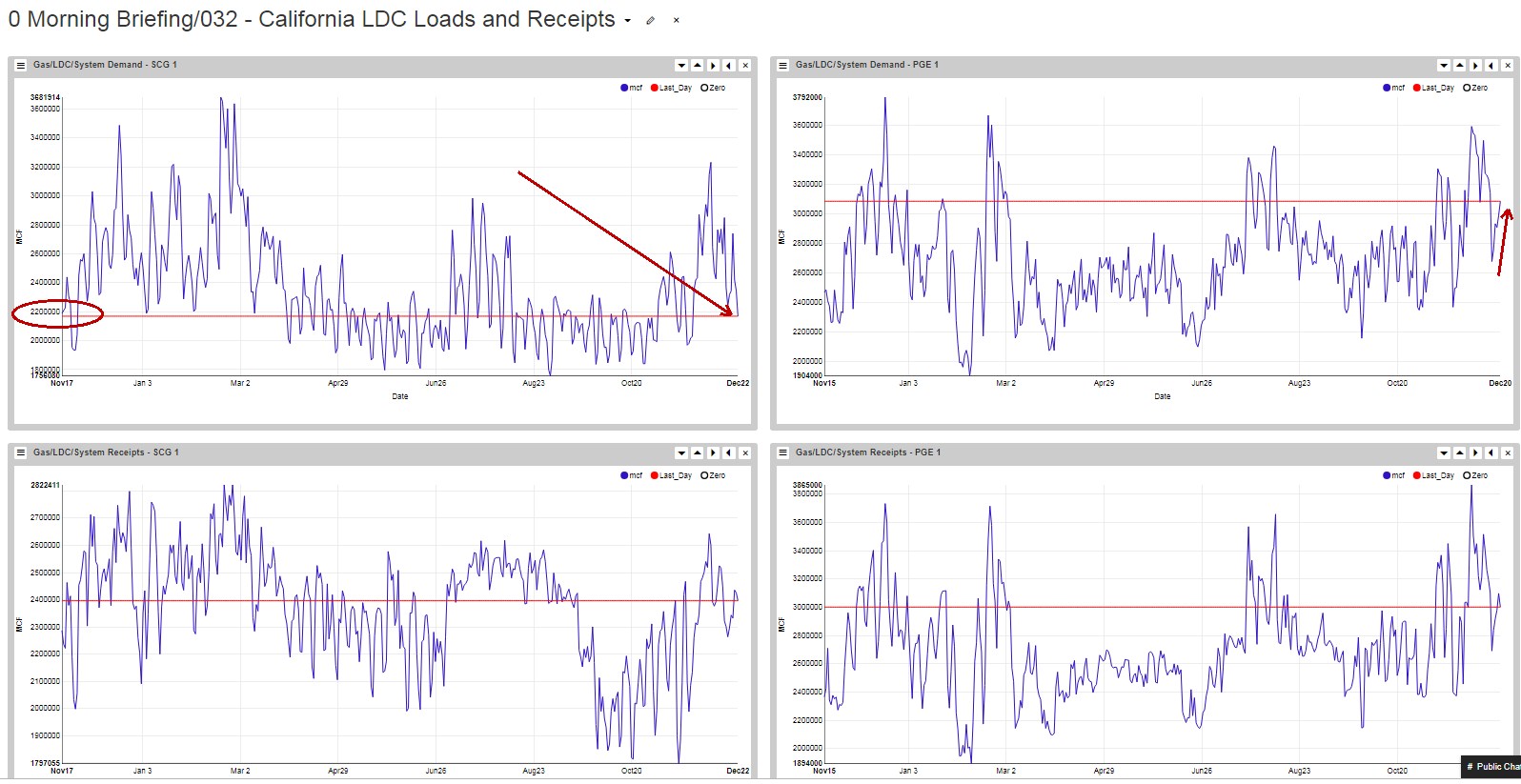 Socal’s Sendout has cratered on those exceptionally warm temperatures; interesting, because PG&E’s loads are up and soon to spike back to the levels we saw earlier this month. 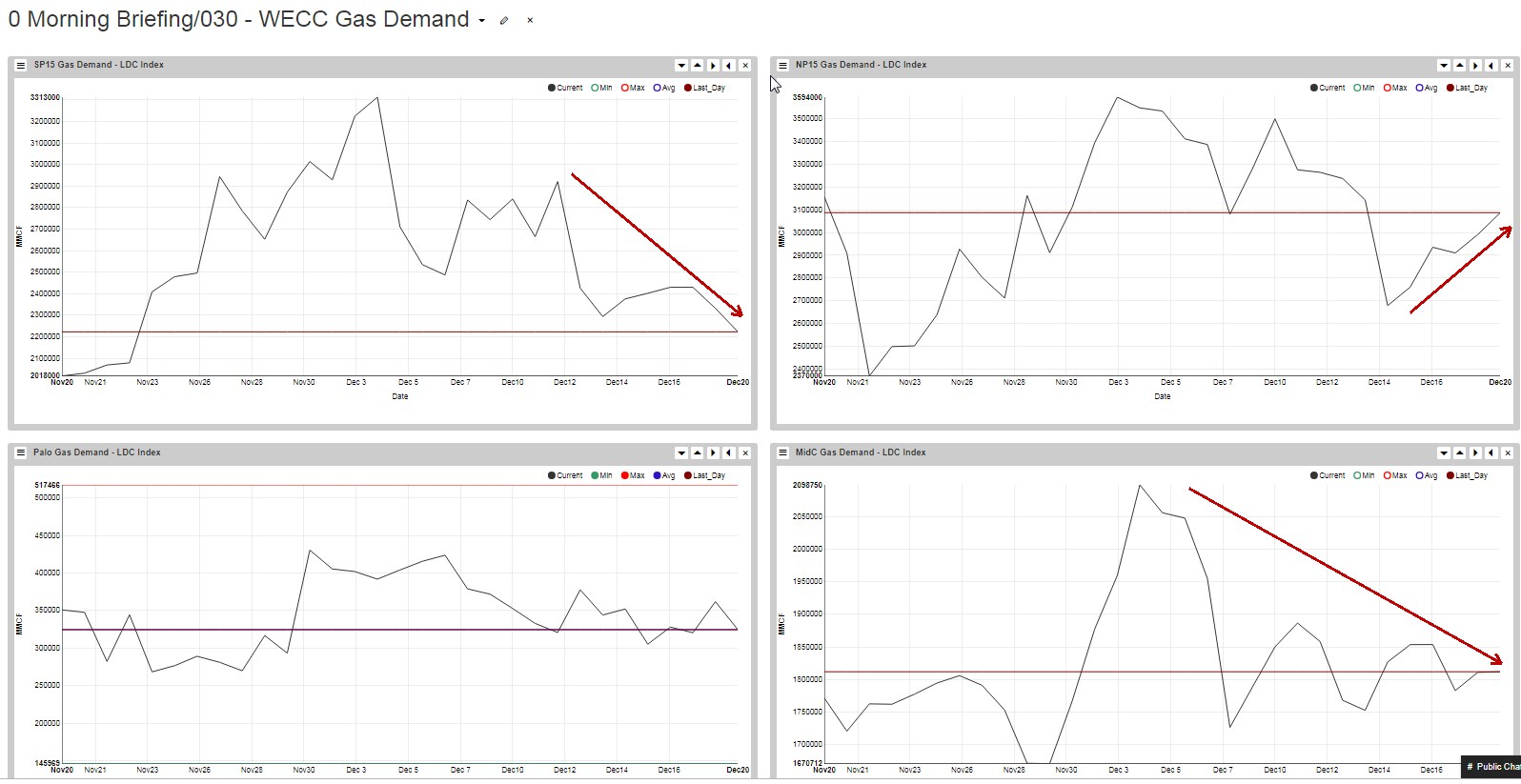 The above plot is a new dashboard, a chart of the last 30 days of LDC demand by power hub. Ansergy has mapped all of the LDCs inside a power hub and aggregated their gas nominations. This data is a close as you’ll get to actual gas demand, at least outside of the two Cal LDCs.  PG&E’s demand has rallied, MidC’s tanked and is now sideways, same with Socal. 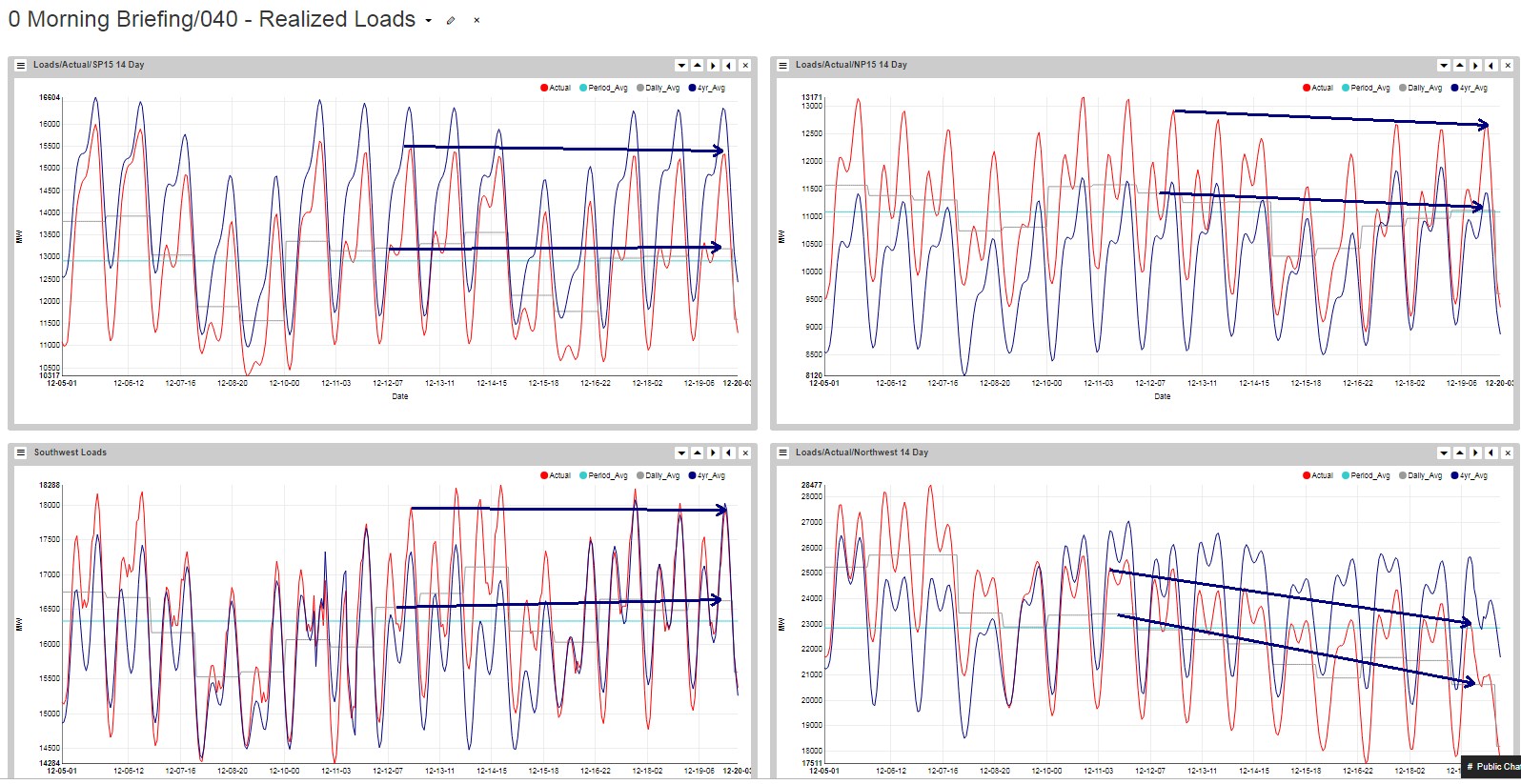 Power demand at the four traded hubs is either sideways (SP, NP, PV) or in a free fall – MidC. Cold weather should change that. 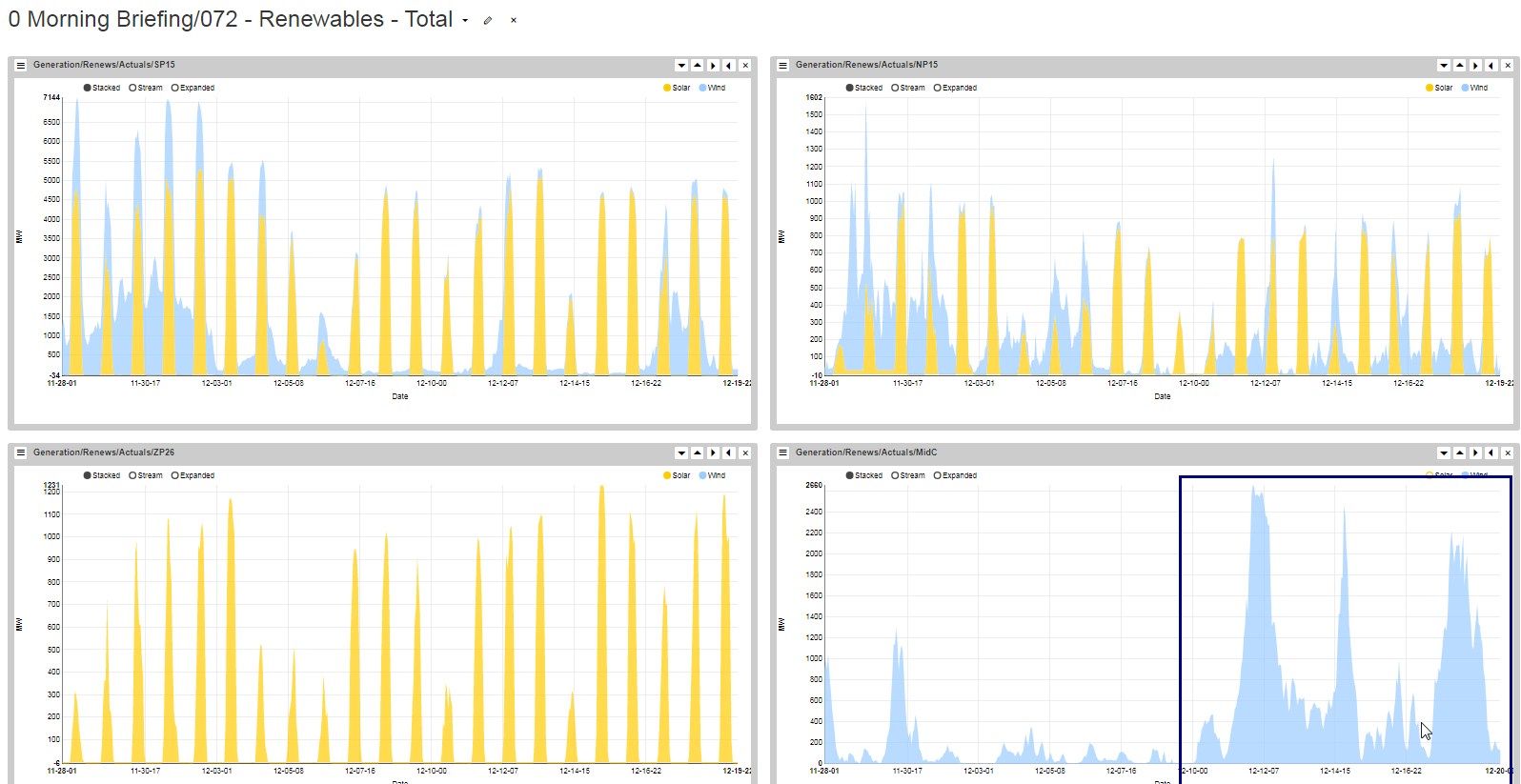 The MidC’s wind has been consistently strong further weakening its cash markets. California’s solar has been volatile due to the big storms systems that have blown across the state.

Check out the changes to the SWE (Snow Water Equivalent) anomalies at the MidC. A week ago, the hub-composite was 70%, now it’s in the high 80s. Those storms pushed up the NWRFC’s water supply forecasts a bit. As of yesterday, about 25% of the Northwest’s snow pillows were above normal; a week ago maybe 5% were.

We also took note of the drops in California; NP15’s composite snow anomalies were above normal two weeks earlier, now they’re in the 80s. El Nino-like water … not yet, anyways. 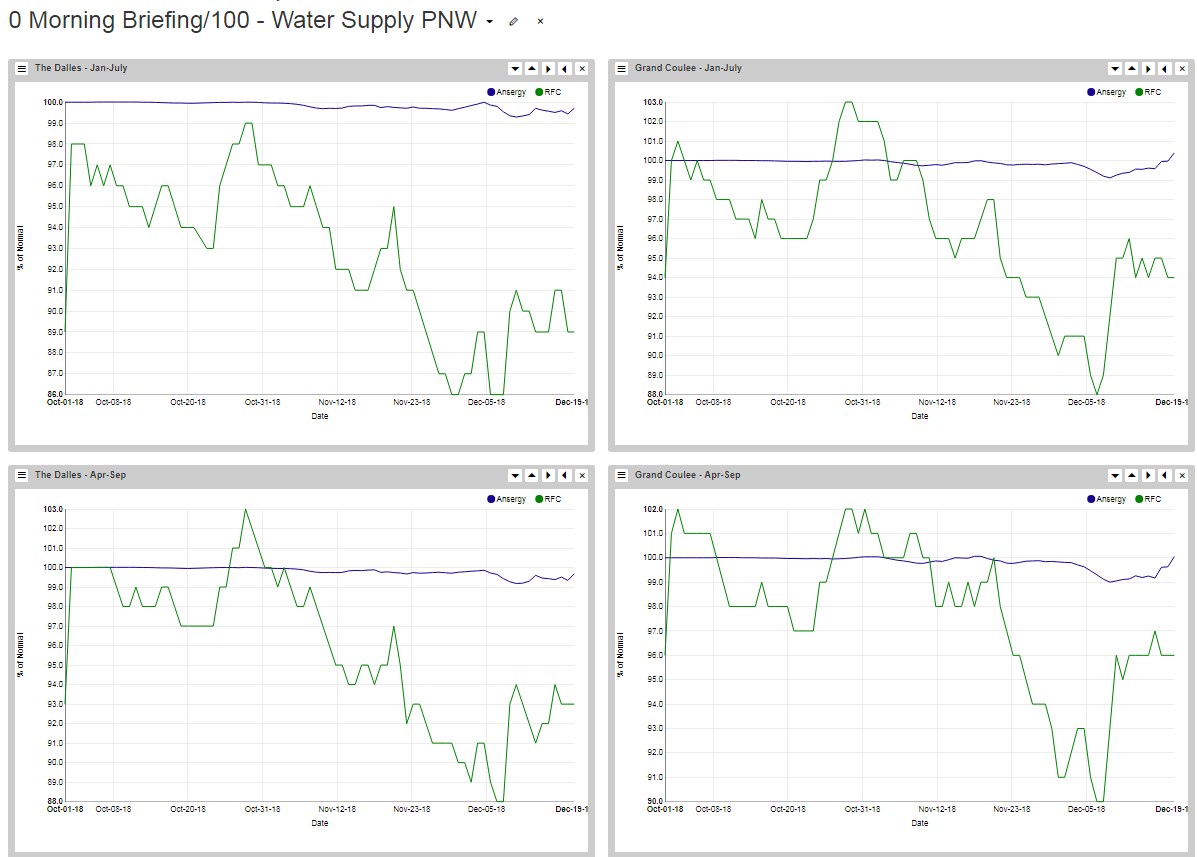 We’ll be closely watching these numbers over the holiday; the first flood control guidance is released around Jan 10 using the TDA Apr-Aug forecast. Given a drying trend, that forecast may be in the low 90s which would suggest a modest draft into the 1240s at Coulee. 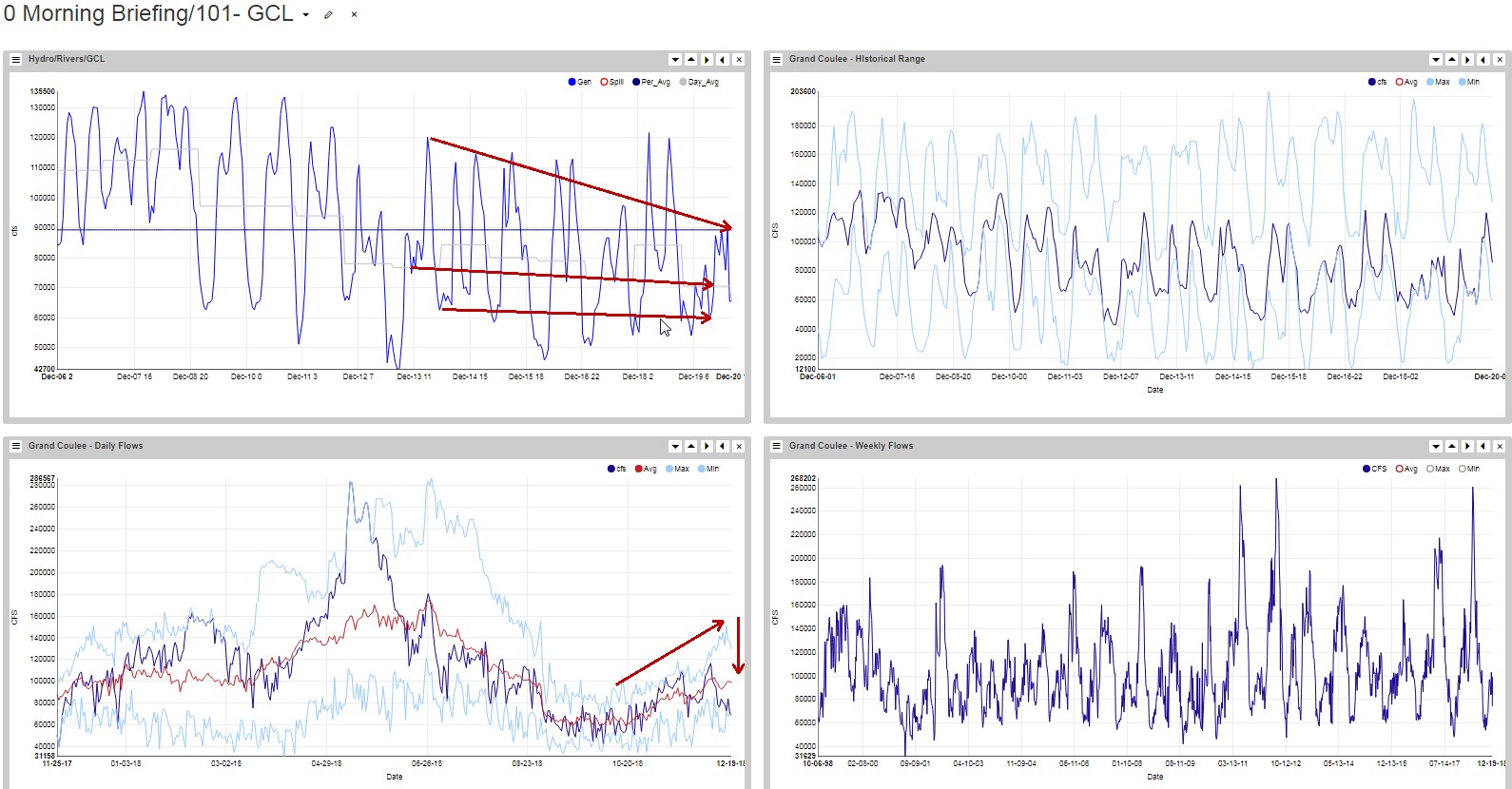 Energy from that large project has been cut, much of the water coming into Coulee is refilling the reservoir. We’d expect discharge to pick up as BPA drafts to serve load next week. The NWRFC doesn’t see that, though. 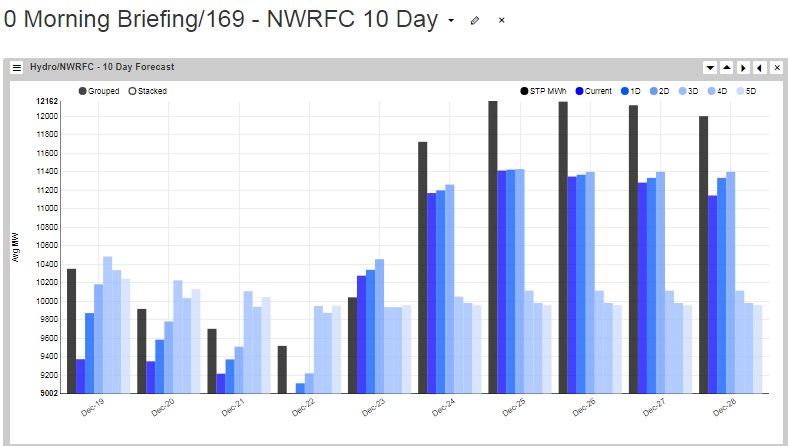 Just two days after releasing its weekly STP, the agency has cut its December flows across all days in its 10-Day. We’d expect just the opposite, a strong rally as the water is used to meet incremental cold-driven power demand.

A parting comment on this week’s STP – it’s too low. These forecasts are suggestive of a near-record draught, but that isn’t what we saw in the current snow anomalies. The Northwest is below average, but not by much, and we expect the Feb-April forecasts to see some significant upward restatements.

BC exported energy in a big way at MidC yesterday which was surprising given relative weak fundamentals at the hub. Was there an outage?

Cold, but not Siberian-like, yet the trend has been a colder outlook for seven straight days. Imagine how cold it would be if that trend continued another seven days? A more bullish near-term outlook, coupled with relatively low market prices, has us believing length is the position de jour. More on that in the next post.