A lot of changes took place over the long weekend. The Weather Outlook turned from warm to cold across most of the WECC, including the load centers. This will become the first cold event of the year and may become problematic with the gas situation in both North and South. Westcoast also threw a curveball by jacking southbound flows — Station 4 enjoyed a 300 MMCF bump, most of which made it to Hungtingdon.

Let’s zoom in on Hungtingdon and Sumas:

and look at the numbers:

This is a derived table (from the pipe data) comparing last year (Oct 1 through Nov 25) versus the period right after the explosion (Oct 10 to Nov 20) versus this last week (Nov 21 to Nov 26). The average Huntingdon haircut was 641 MMCF, and now 298 MMCF of that has been restored.

The split between Fortis and Sumas looks about 50:50; Hungtingdon average bump was 294 MMCF while Sumas saw a 145 increase but remains 280 MMCF behind last year. The average flows at Sumas from Dec 1 to Mar 31, last year, were 1095 MMCF, or about 470 MMCF less than last week’s average, after the bump. Clearly, MidC is not out of the gas doghouse just yet.

The other big news was the weather … 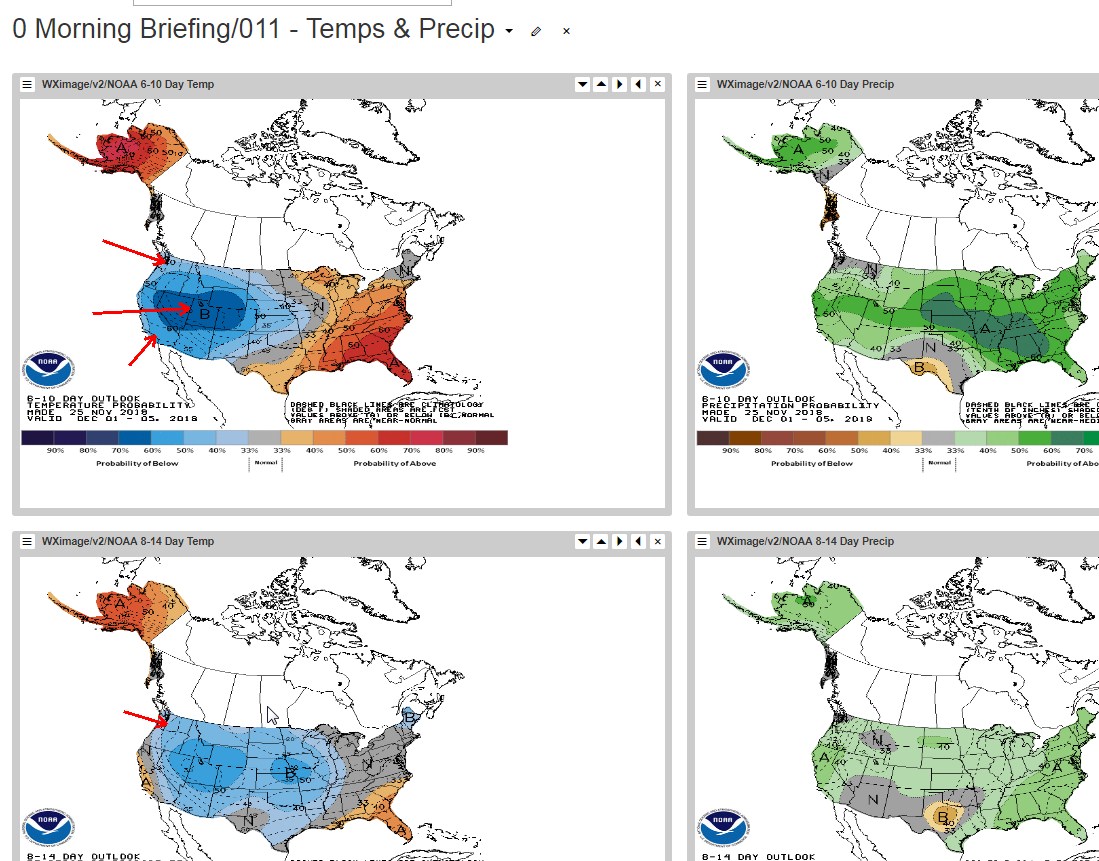 The cold anomaly has spilled into the coastal cities for the first time this year. Even LA gets cold …

Burbank flirts with a 10-year low later this week and, if you trust the 7-10 day forecast, it gets another blast of cold. Portland and Seattle are chilly, not cold – 20s would be cold, this forecast puts each in the low 30s. Still, next weekend will be the biggest test of the post-gas apocalypse. Here’s the hourly view of the temperature forecast … 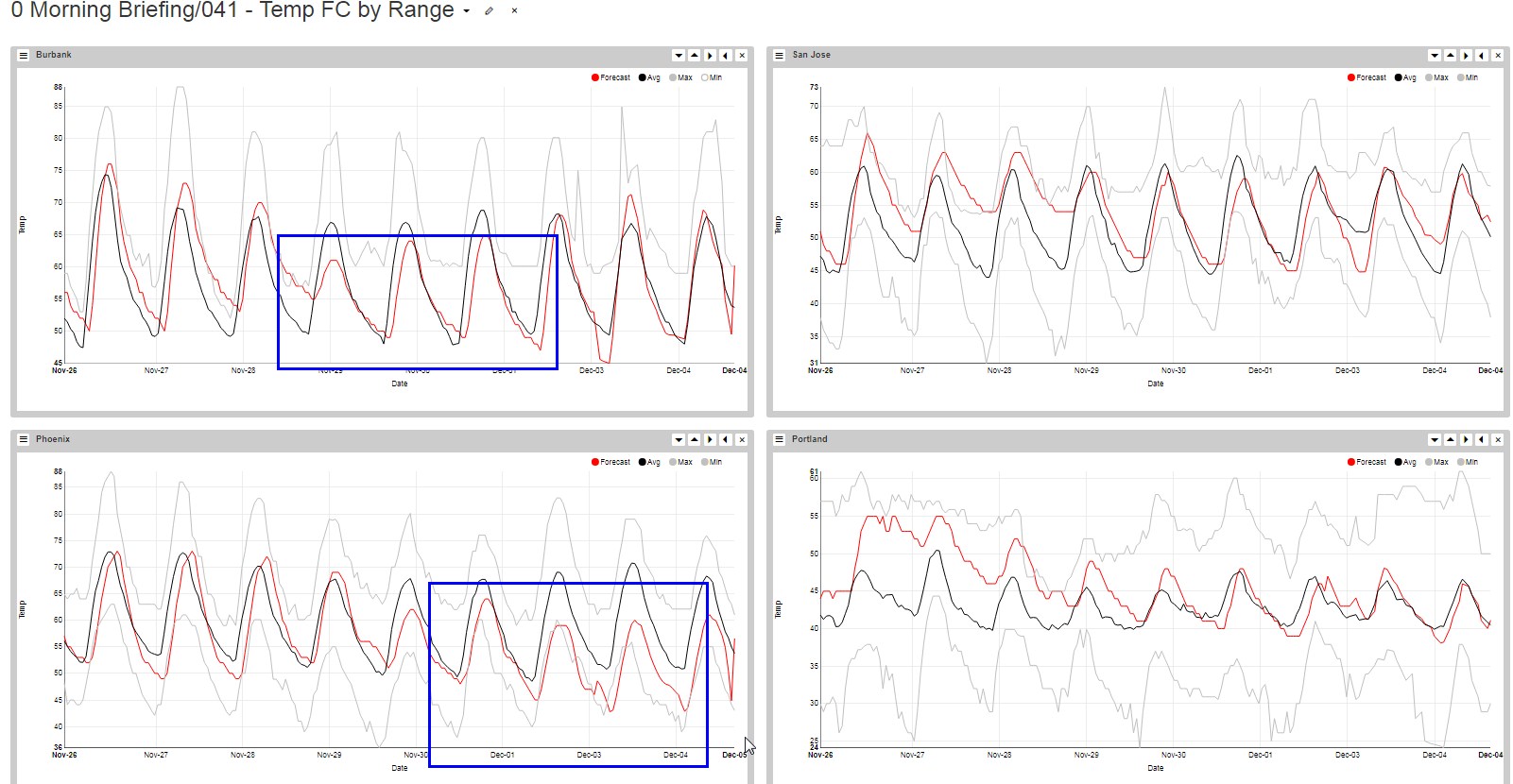 The cold is more pronounced hourly with both Burbank and Phoenix setting or matching ten-year lows. So loads (power and gas) will go up, but is it cold enough to trigger blackouts? No, we don’t think so. Even if it was cold enough, there are bullets to prevent that. On the power side, BPA can draft its reservoirs and generate another five gigs of hydro and Mist and Jackson can replace most of the lost Sumas imports – for a few days.

Double-digit Sumas? Not anymore, Friday’s going out price was in the mid 7s. Socal didn’t move much, however.

In fact, the Citygate rallied while Sumas plummetted – all off of a 150 MMCF bump at Sumas. That’s rounding error in Socal’s gas nightmare world.

All the while, Jackson has been building during its “draw” season. 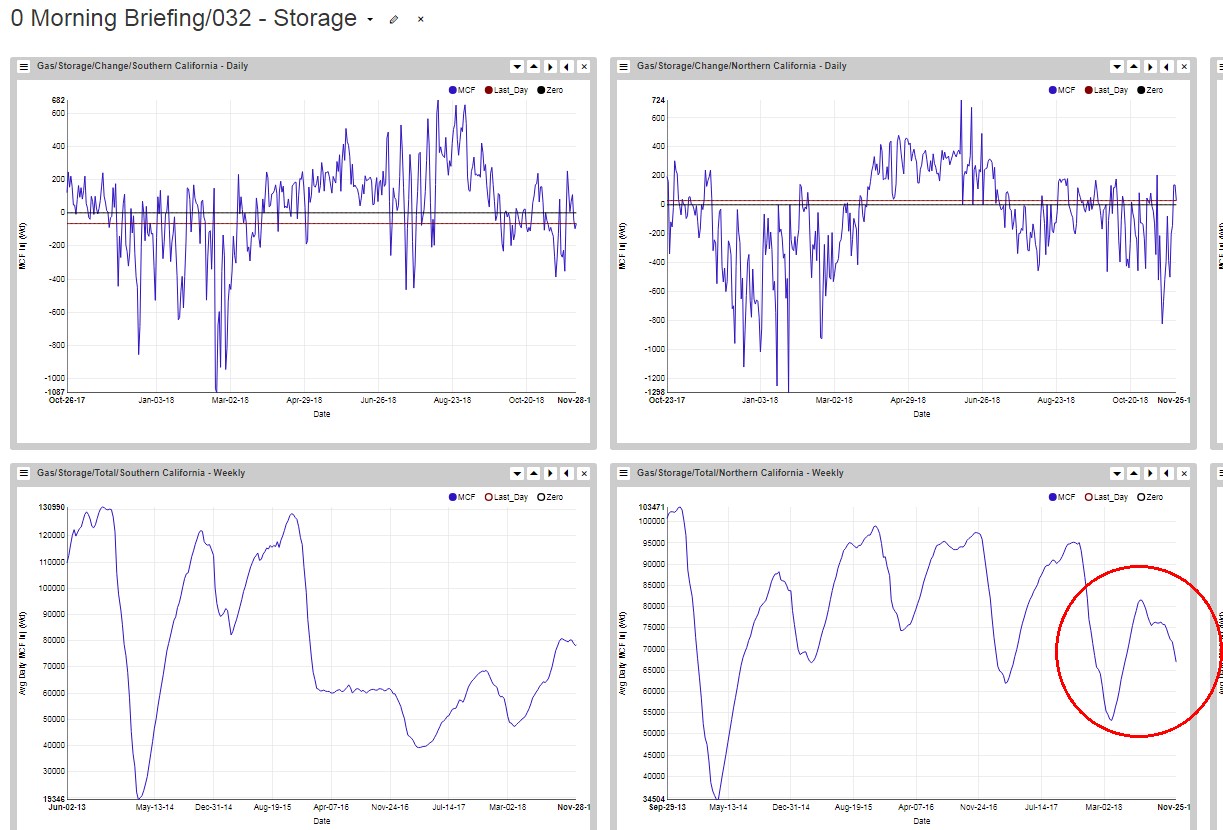 Not true at PG&E, storage in NoCal is dumping and is at a four year low. 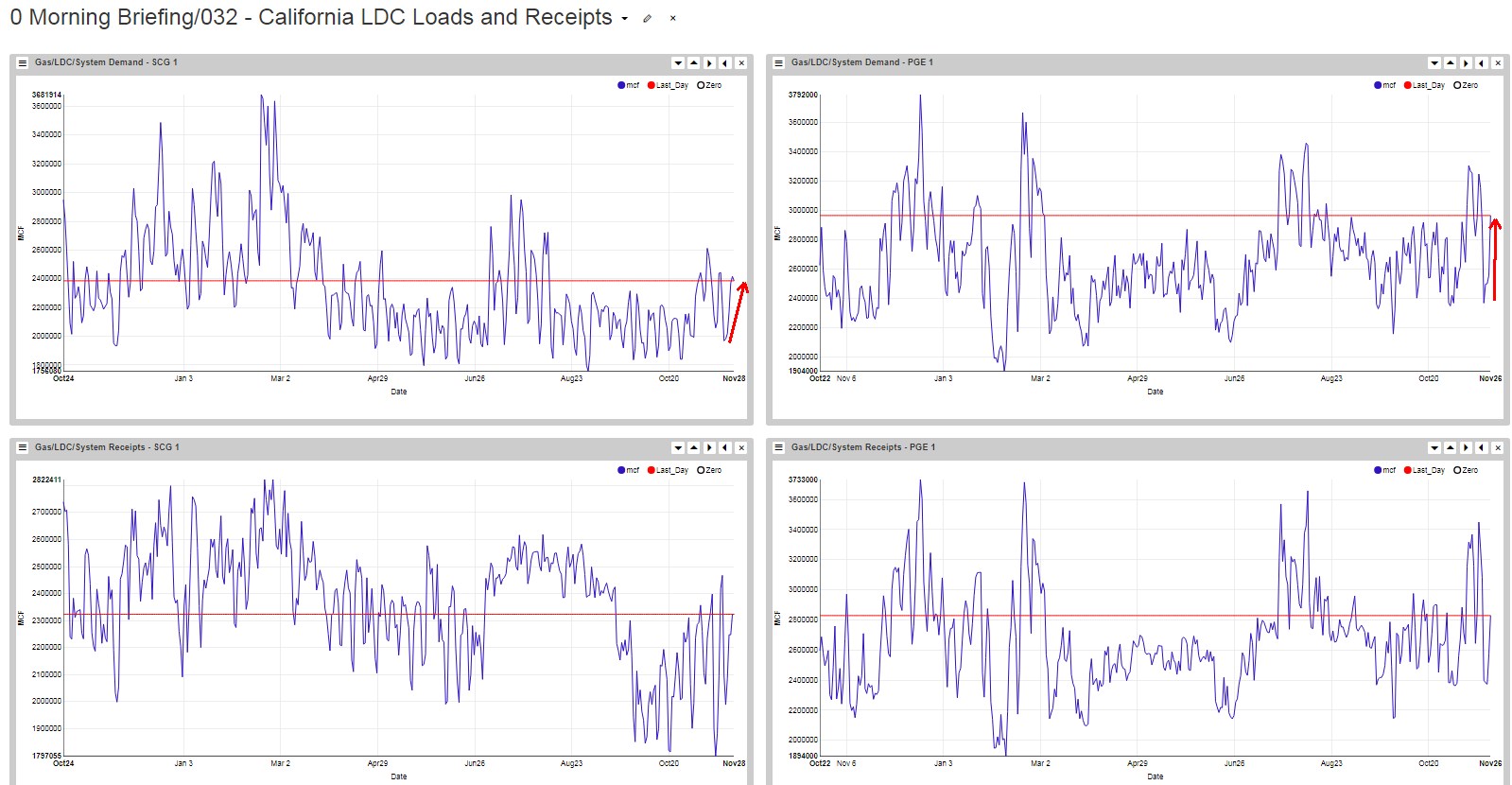 While loads are ticking up and soon to be gapping up off of that cold weather, supply won’t change much, though Socal Gas has scheduled another Wheeler Ridge outage next week – they might want to reconsider that strategy. 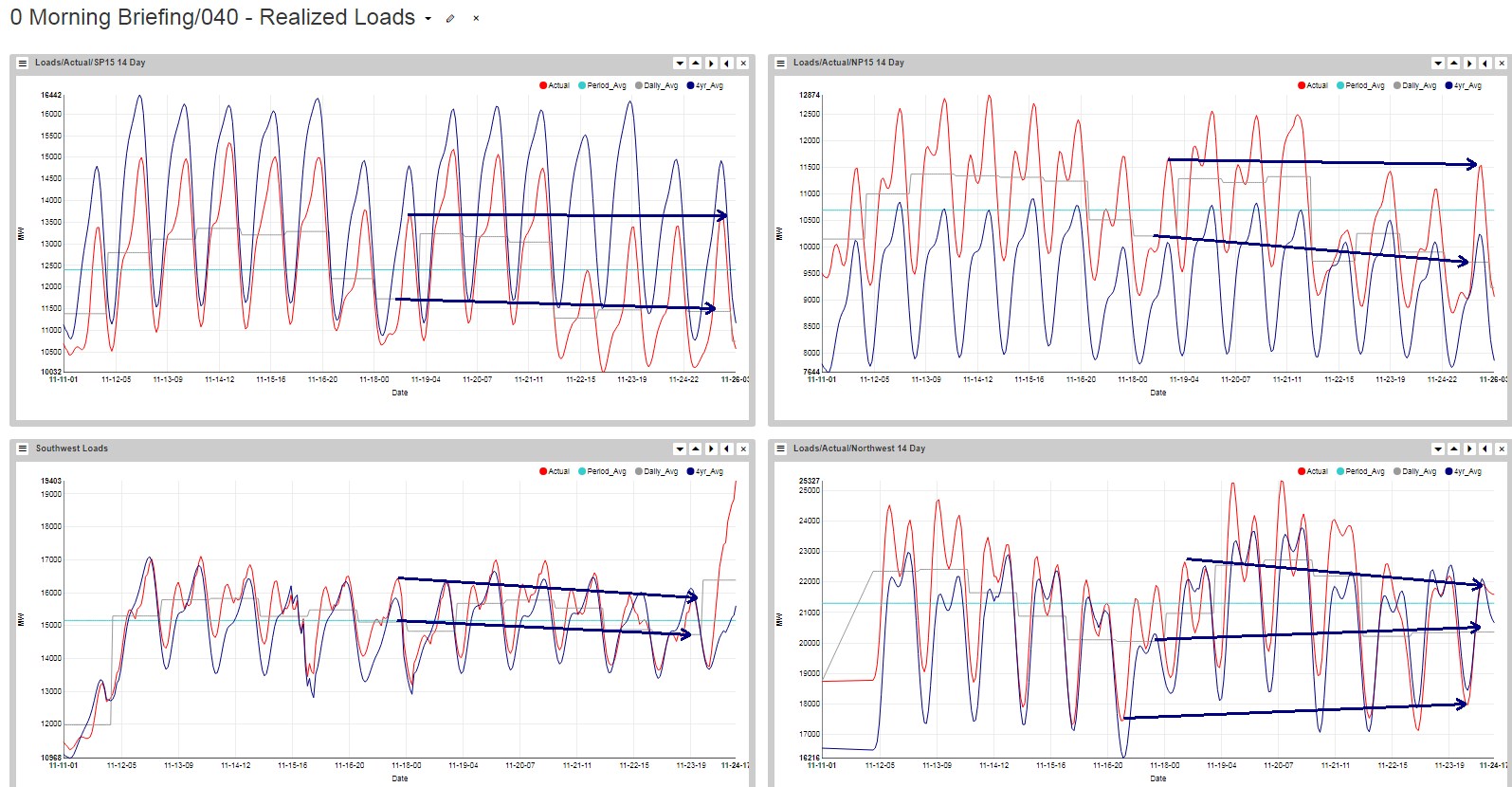 Power loads are off or sideways at all four hubs. Expect these plots to get more bullish by week’s end. 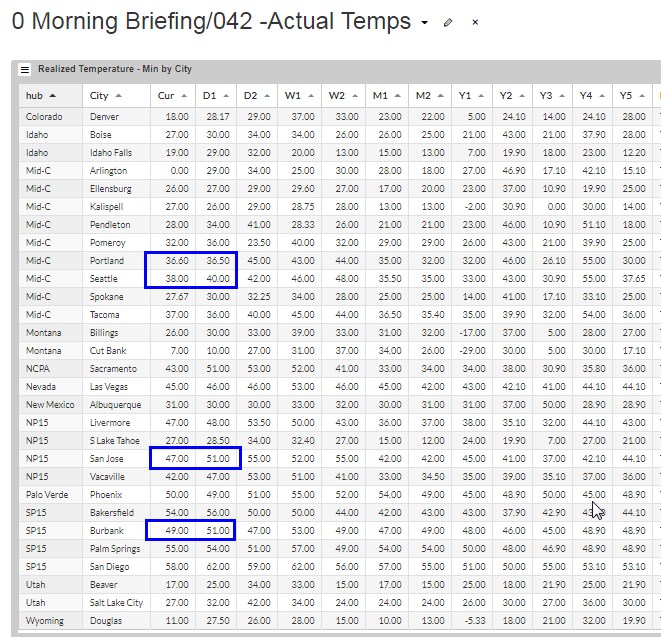 California city’s lows will drop 4-8 degrees from yesterday, the Northwest may be a bit less. 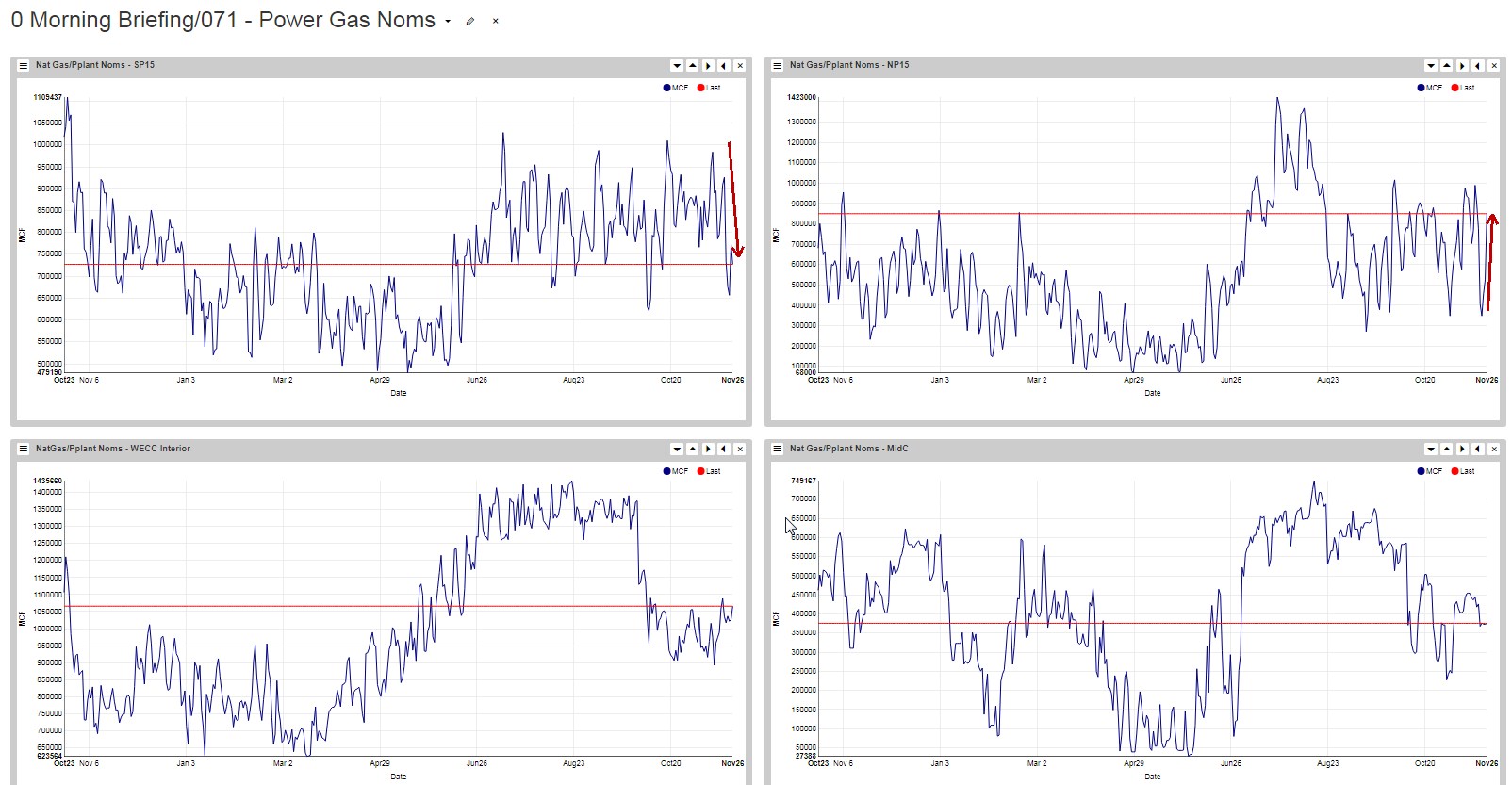 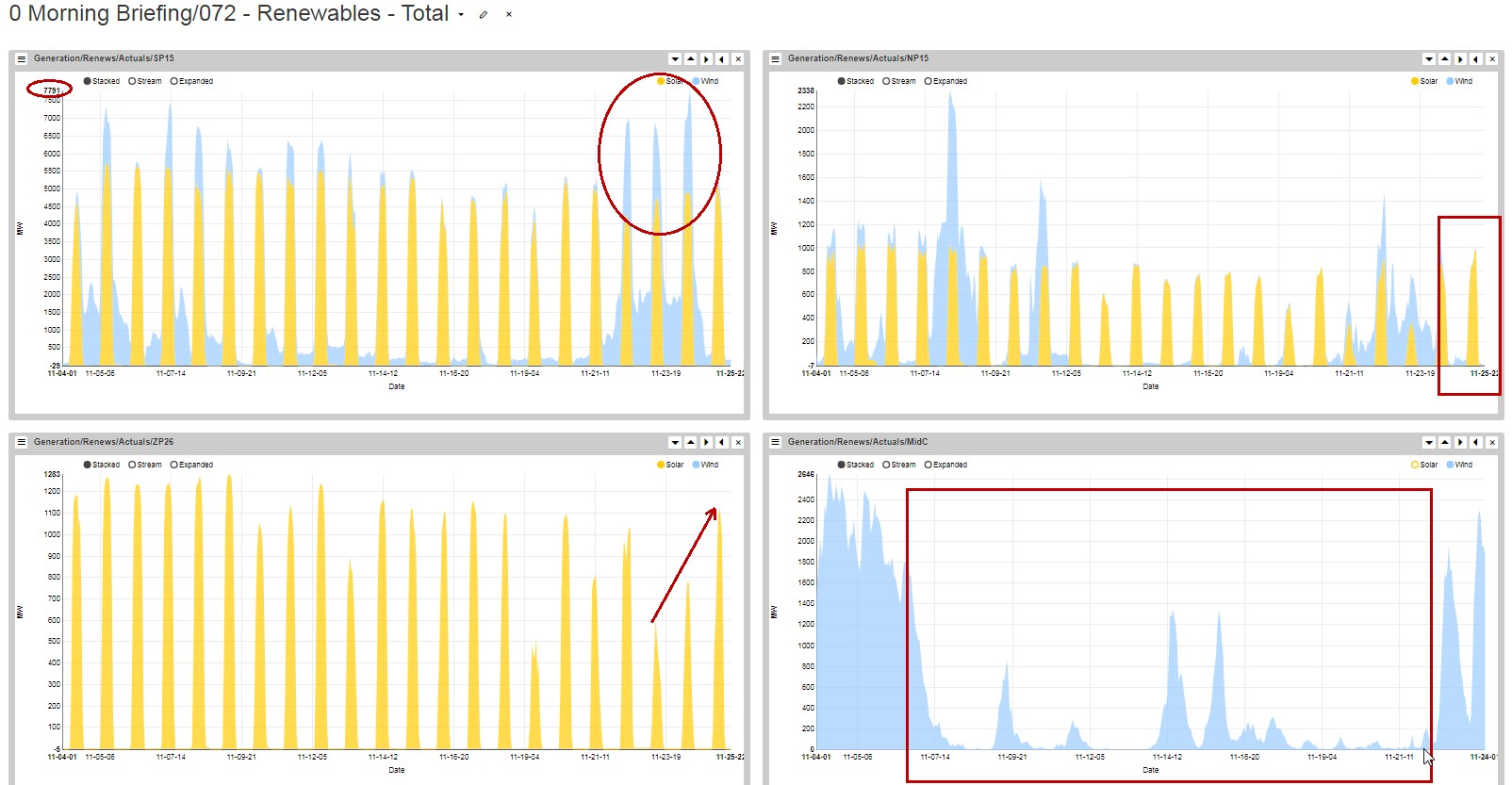 SP15 saw a 15-day high in renewables yesterday, but not NP, there was no wind in the northern portion of the state, or it was dispatched. The Northwest’s wind was non-existent for a week, but yesterday saw a couple of gigs.

A new dashboard, this one looks at the MidC’s weekly Loads and Resource Reports. The first set of tables compares week-on-week averages and the latter set does the same for year-on-year weekly averages. I find this quite useful for getting a relative sense of where things are today versus the recent past or the last ten years. 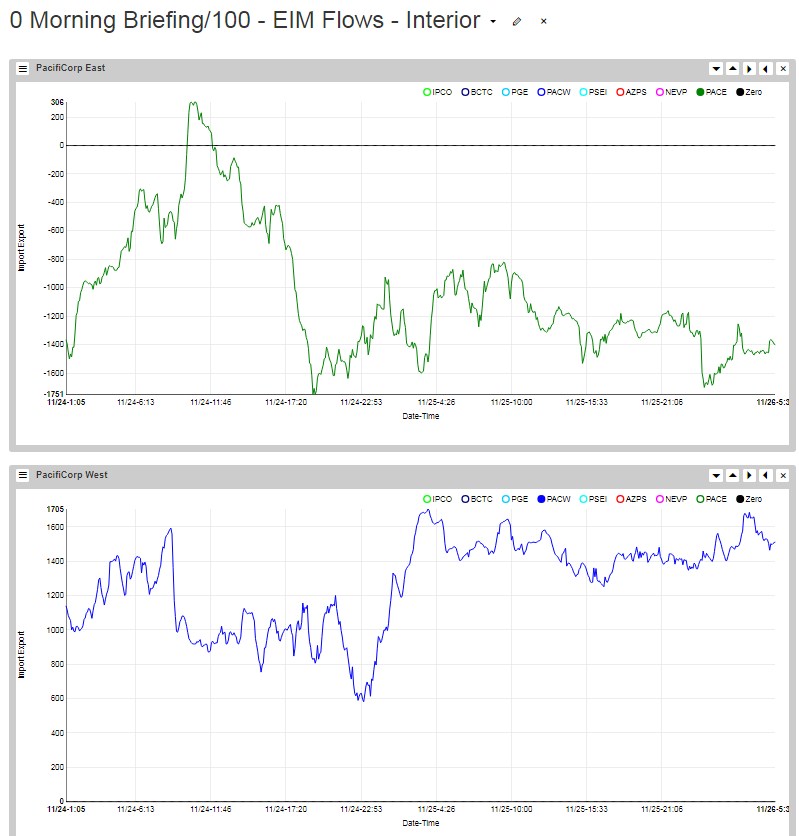 Sidebar Report. These plot the 5 minute flows for PacEast and PacWest and are mirror images of themselves. PacWest exports every hour and PacEast imports every hour. Do they need the ISO to do that?

Significant rain arrived along with the cold, though the precip was more prominent before the cold snuck into the outlook. Still, California is poised to get over an inch of precip across the state but will receive less than what was forecasted four days earlier.

The Northwest toyed with big rain for a few days, now not so much. Instead of Inches of SWE, it will receive HDD.

Hey, it’s now deep enough into the water year where anomalies start to matter. Too bad that significant precip forecast didn’t stick around, these 92% forecasts would have surged back to the high 90s. Ansergy is sticking to its forecasts, just below average, even though they are materially higher than NWRFC’s. We’ll see who gets this right in February. 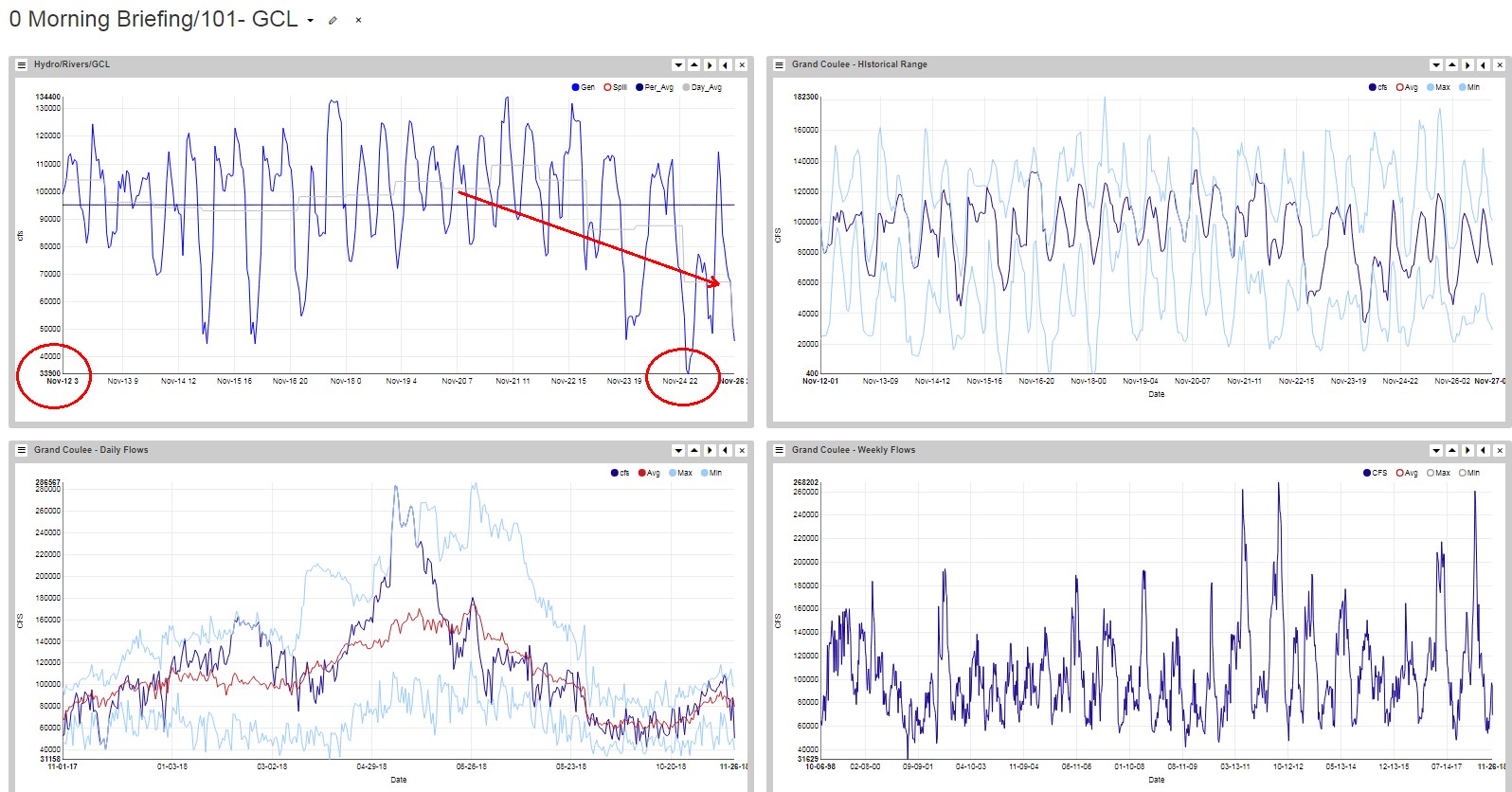 Mica storage is at a ten-year low, so is Lake Pend Oreille – oops, perhaps they drafted a bit too much? BPA’s playing “hide the pea” and is running out of shells.

This is another new dashboard that plots the discharge from all of the California major reservoirs. There are more in the report; these are six we like looking at. Keswick has no storage, so its inflows are Shasta’s outflows. 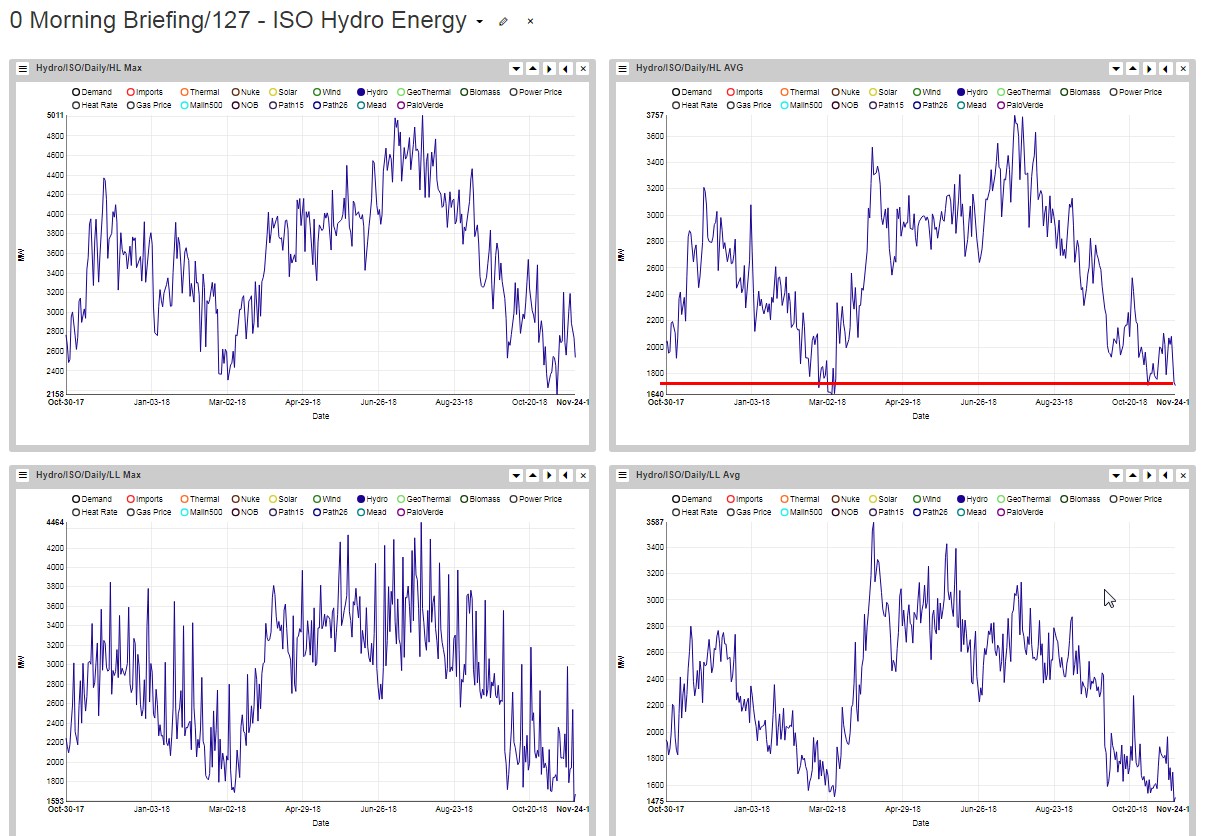 If you thought the recent California rain would jack hydro energy, think again. All it seems to have done is put out the fires and increased stored water, a bit. 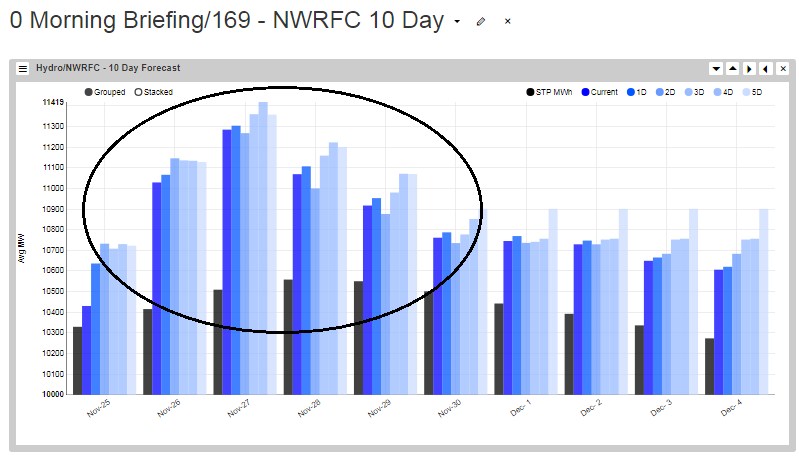 Coulee may have cut flows over the holiday weekend (weak loads?), but the folks at the NWRFC are suggesting a big surge is coming. Perhaps this is in anticipation of that cold weather? Surely isn’t from natural river flows, not enough rain. 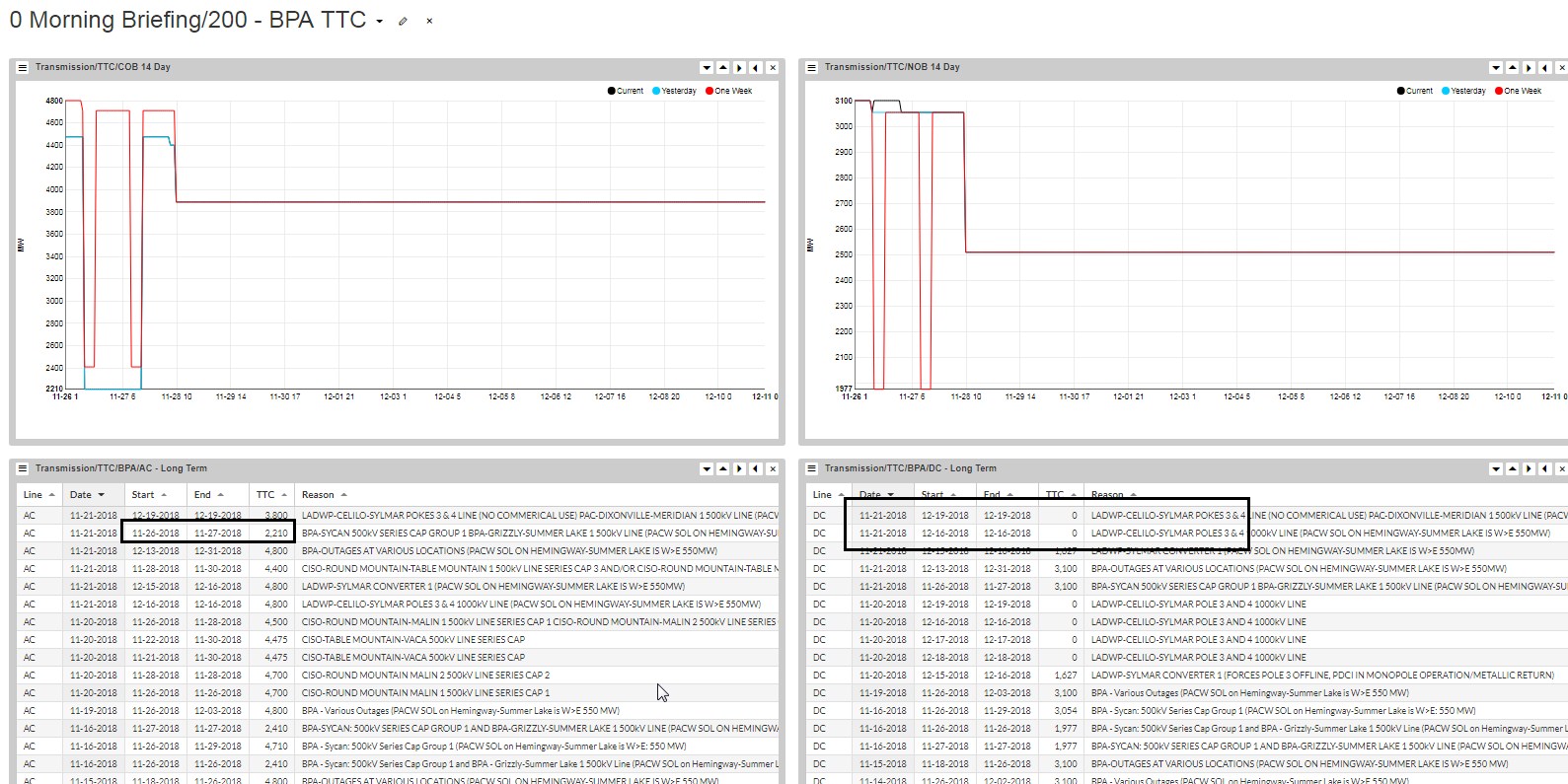 BPA posted some TTC updates last week; the DC is going back to zero for a day or two while the AC’s capacity is cut in half on those same days.

Westcoast may have bumped flows on its pipe, but not that much made it into the USA. Sumas still lags last year, after the bump, by over a half a B. You’d have thought the entire outage was restored by what happened to Sumas Term Gas. We’d fade that correction and jump back in for some cheap length off of this cold weather, or at least that is what we’d do without looking at market prices, which is precisely what we’ll do in the next post to follow shortly.