We’ll complete today’s post by examing SP15’s term market. We use APT to sort and rank the trades; we’ll also include our ranking of the spreads which will be Thursday’s post.

I’ve sorted SP on period and will crawl through the opps in that order.

BOM has pulled back, and rightfully so given the warm weather. SP15 degree days for Nov are off about 50%, and there is little relief in sight. Maybe a bit cheaper and this becomes a buy, perhaps it’s a buy today. After all, we think tight Northwest will drive SP higher through intertie cuts and the virtual hype line that makes all WECC hubs trade in sympathy. Yet, we believe, there are better opps and we’ll… PASS. 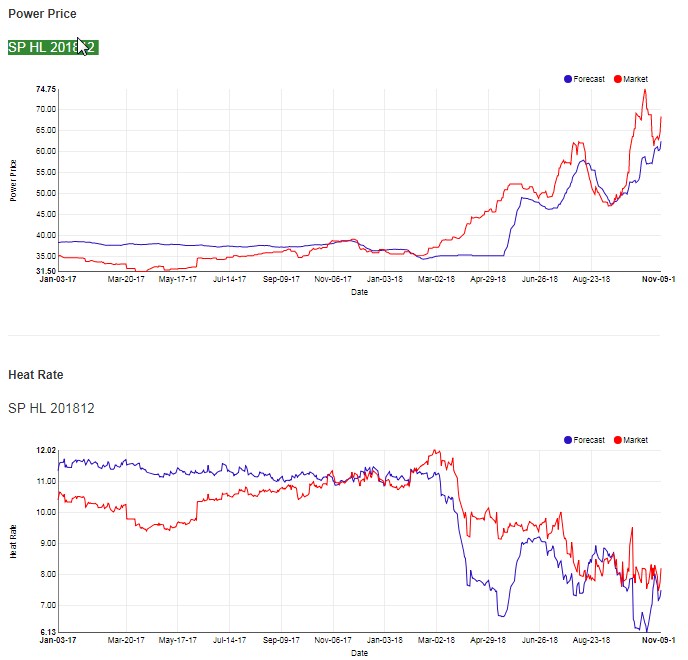 Dec, unlike Nov, has rallied after its pullback as the market correctly ignores these warm weather anomalies. Heat rate wise this one is cheap, but we all know how irrelevant heat rates are once gas soars, though Winter might be different than Summer. In the latter, we saw all northern hubs generating to serve SP load though in the winter those northern hubs (MidC and NP) may very well have problems of their own. Perhaps you won’t need extreme cold weather in LA to spike the market? 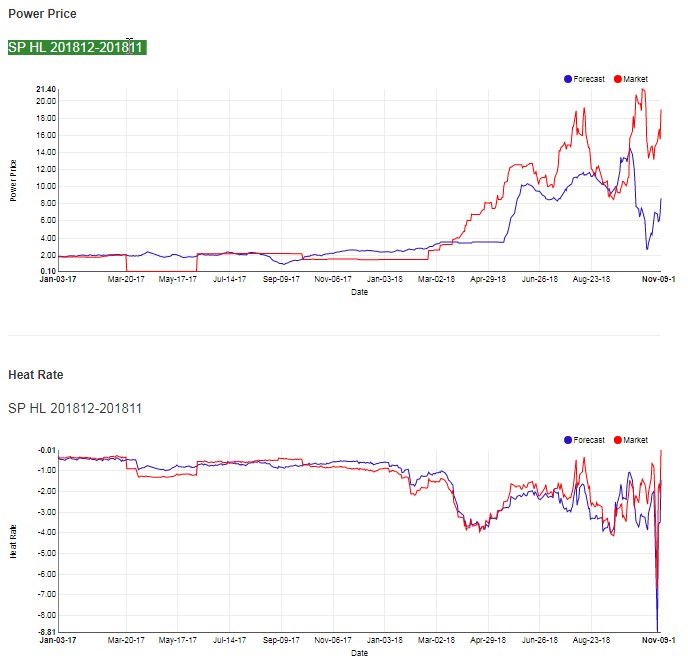 That heat rate volatility is nuts, now the Prompt|BOM is at a contract high (heat rate) and approaching on price. We don’t disagree and would be more inclined to buy this than sell it. 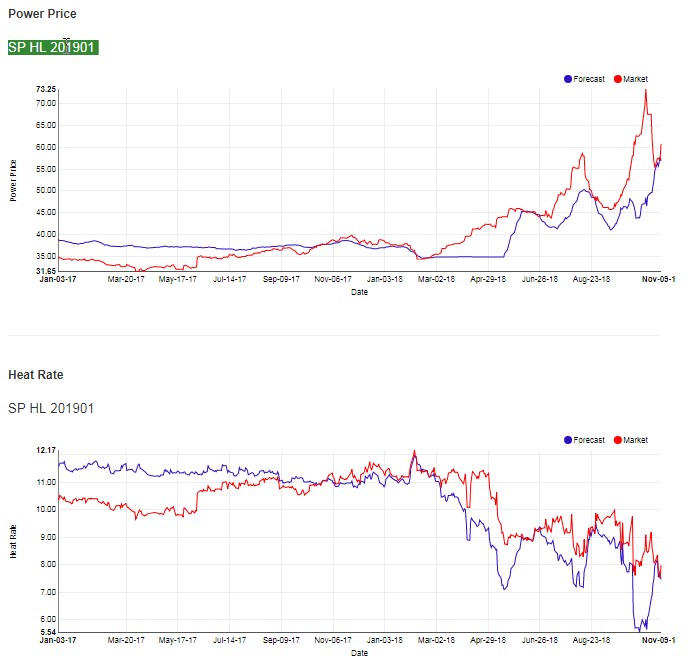 Jan seems relatively cheap given where Dec is. We’ve seen nothing to suggest the Westcoast or Transwestern issues are fixed in Dec and Jan has an equal chance of cold. Let’s look at the roll. 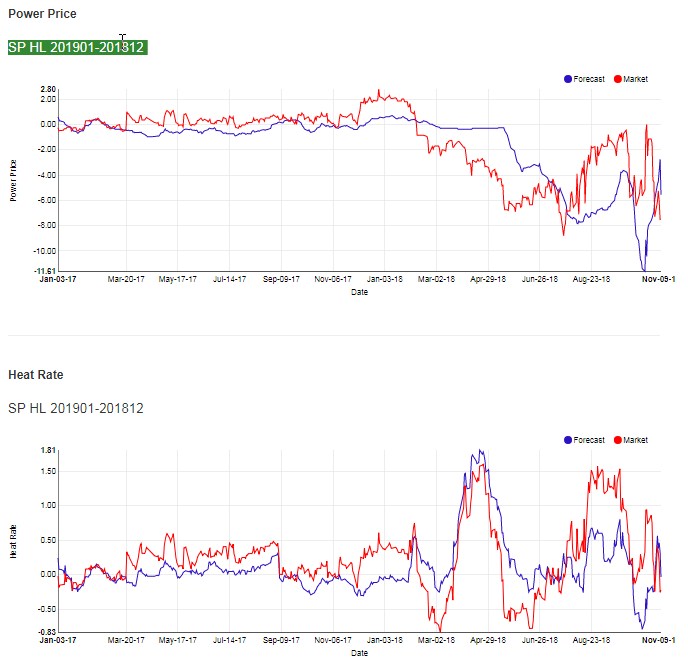 As we suspected, all bullets are being fired at Prompt rendering Jan relatively cheap. If the weather stays warm the nearer month will come off harder than Jan. The risk is bitter cold so buying this is a hedge against more warm days. 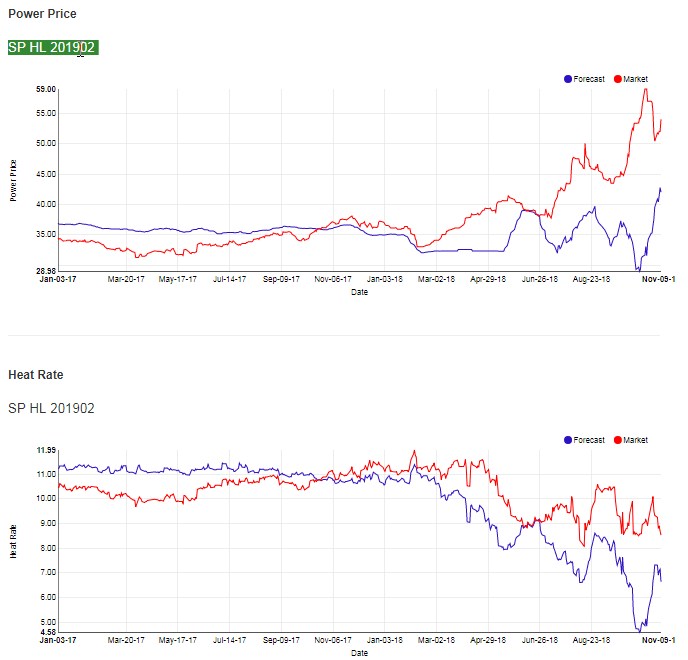 Feb looks like a less-volatile Jan, yet appears rich relative to the forecast from both a price and heat rate perspective. Its relative richness is best measured by the roll.

These plots suggest the Feb heat rate is still too high, especially with the current forecasts. Depending on what your position is in front, this might be a short candidate. 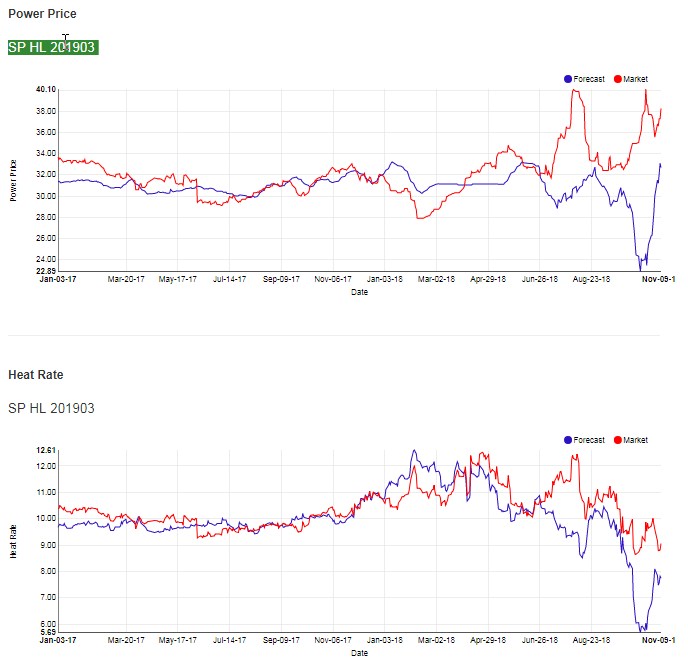 Winter is mostly over in LA by March, but this bullet will trade in sympathy with winter cash. Big cold and March will rally, more bearishness and it will probably range trade between $36 and $40; now its at $38 and the trend is up. I’d wait for a cheaper entry point or play the roll. 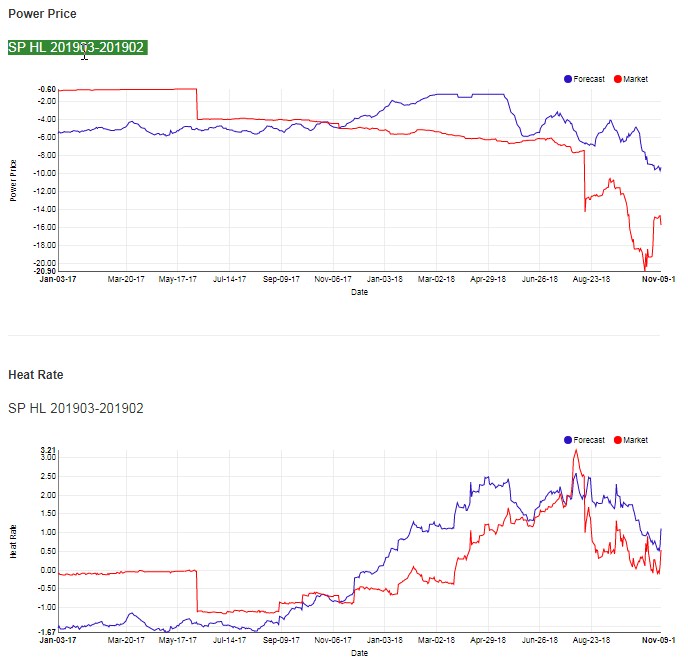 Interesting, the roll is still cheap and was ridiculous a few weeks ago – we wrote about it and put out a buy. Given a $6.00 rally we’d be inclined to cover our length and sell it, but if you’re feeling piggish staying long may not be a bad play. 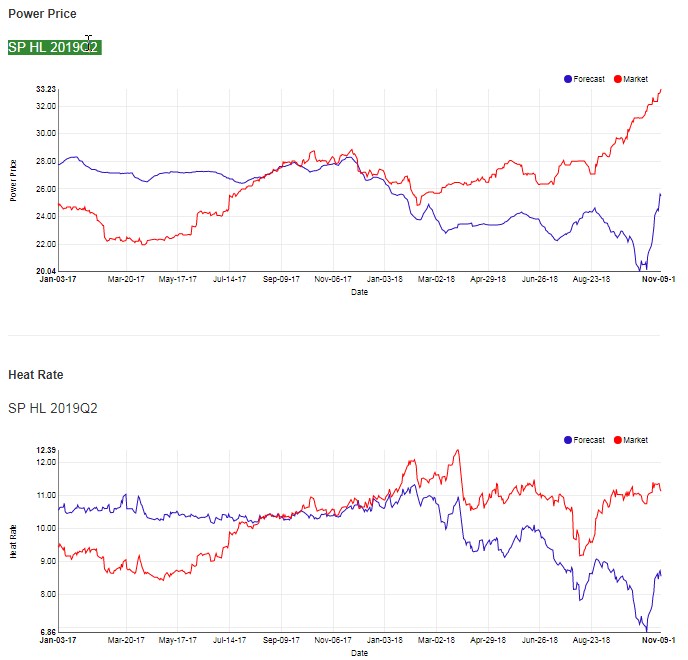 What can we say, the Q2 has been on a bull run since June and there is nothing to suggest this will pull back anytime soon, not until the winter threat has expired. Hate buying at these rich levels so will look further into the curve and at the rolls. 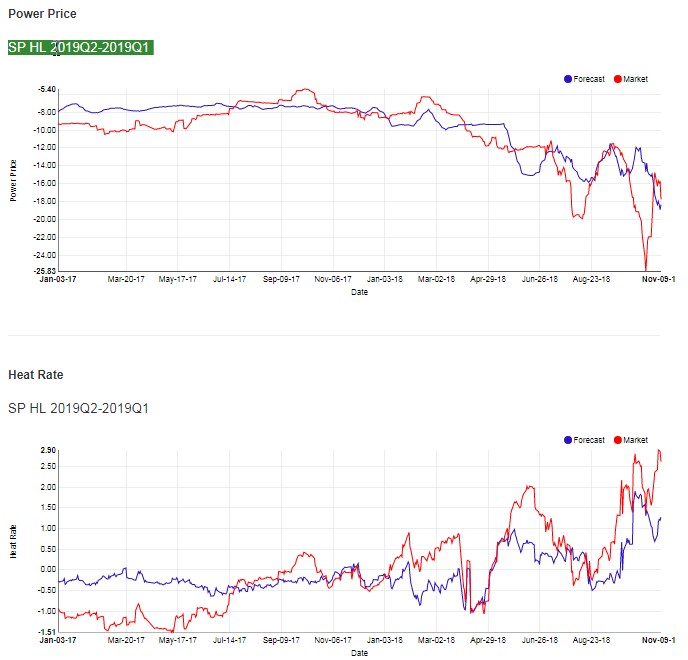 If you were camped out on this curve and bought that bottom you’d be laughing, we missed it because we weren’t even looking. Now the roll is more fairly priced than not, from a price perspective; the heat rate roll is at a contract high. 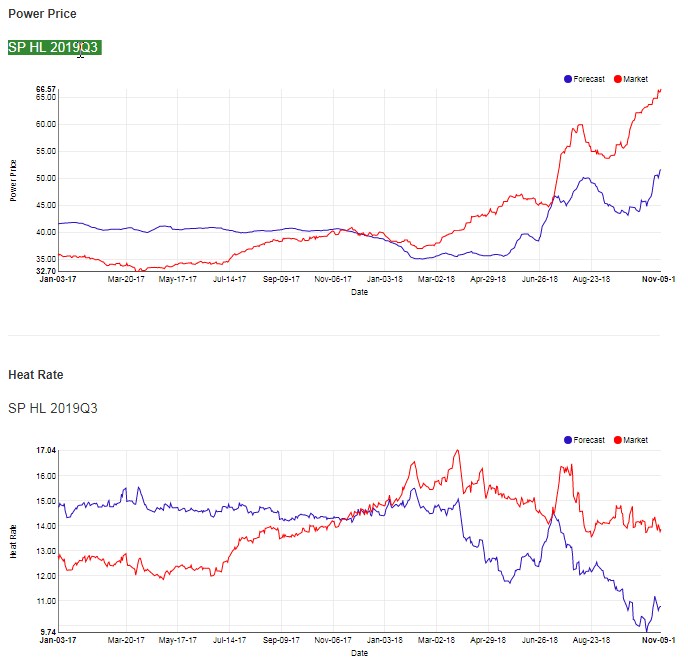 Q3 has been on an even longer bull run, since March. The heat rates, however, are just sideways. Hard to short this since it doesn’t come off in bearish cash and would probably soar on bullish cash. If anything, I’d be long. 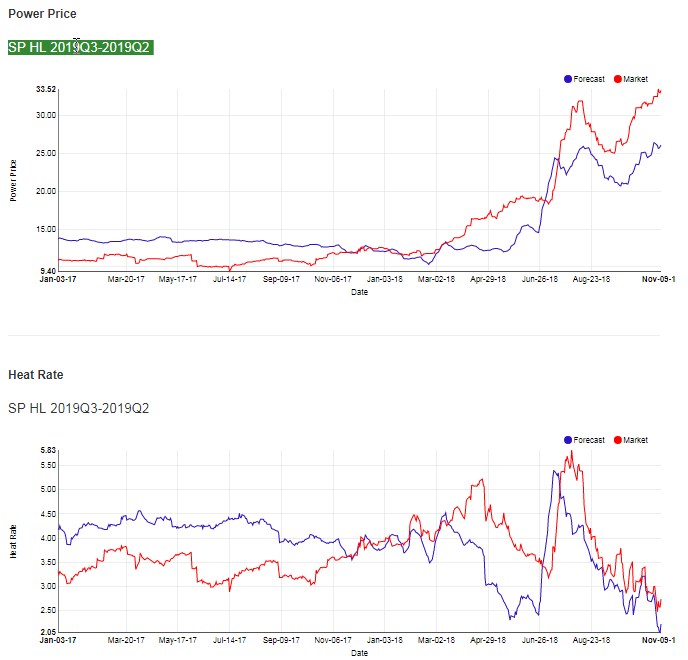 The heat rate roll is super cheap, a contract low, while the price is just the opposite, it’s at a contract high. This is probably not miss-priced by much given the very low odds of having gas curtailments in Q2; probably next to zero % chance in April. The safest way to trade this is to buy the heat rate, but that is a lot of legs.

The Q4 is maybe more bullish than the Q3 which is odd given how weak 2018 has been. There is a total disconnect between this Q and its corresponding cash but what’s to break the trend? More bearish cash? Doubt it, weak 2018 hasn’t dulled the market’s love for Q4 2019. Maybe if Socal Gas announced all of its intertie issues were resolved this would go into a death spiral, until then doubt we see it collapse in the next few weeks. 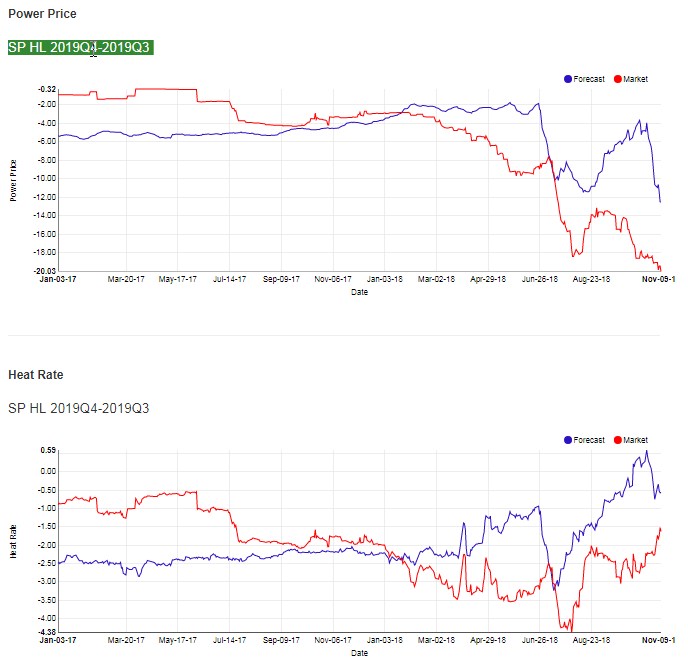 The 4|3 is ultra-cheap, so cheap the price is at a contract low. Both heat rate and price are well below the forecast suggesting owning this is an option. I wouldn’t short it. 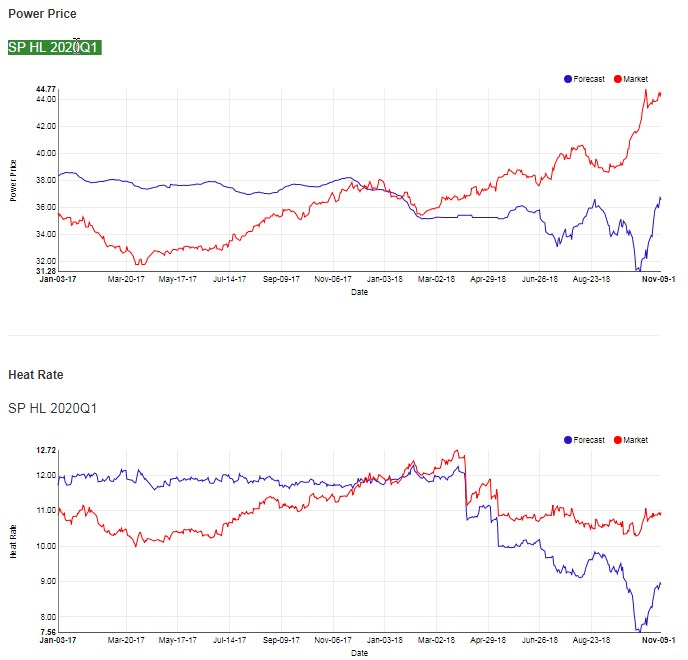 Like the 4 (and 3 and 2 and 1), the Q1 2019 is relentlessly bullish, and we see nothing fundamentally that is going to push this down, at least not for the next few weeks. Like all of these SP Qs, its all about Aliso withdrawal rates and imports. Not seeing signs of either changing and don’t see this coming off this week or next. 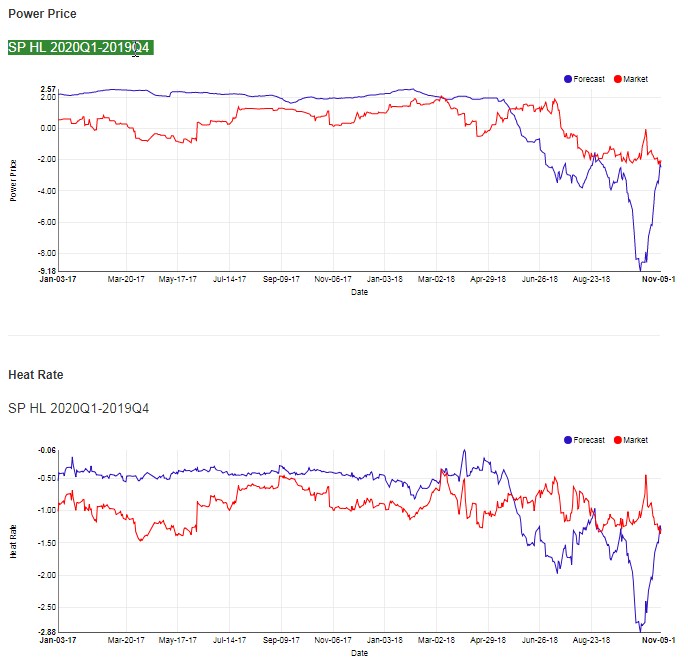 The Q1|Q4 roll is the least volatile of all the Q rolls and also is near contract lows in both heat rate and price, suggesting to me this is more of a buy than not. 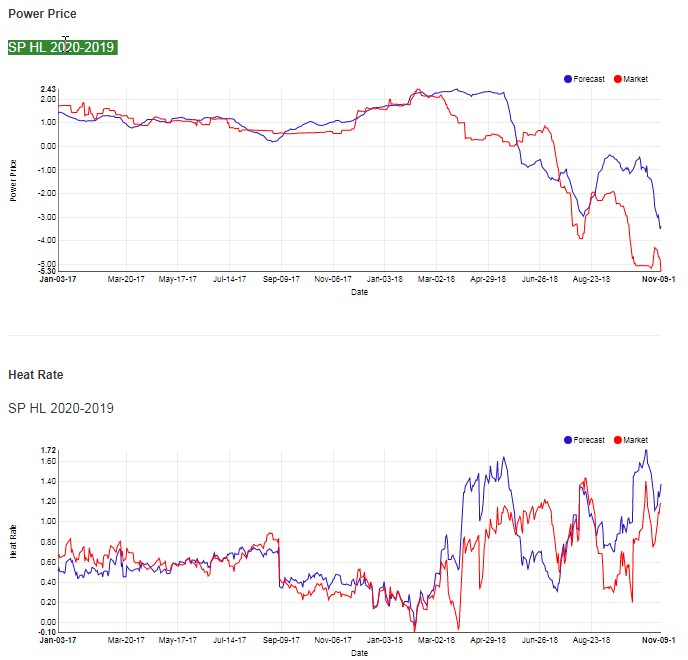 Interesting, contract lows on the price which is telling me the market assumes Socal fixes something by 2020. Bold assumption knowing their historical ineptness and maybe buying the roll is the right play? Afterall, it seems to have found a bottom (support) and bounced along that level for the last two months. Buying this roll is a hedge against a warm winter and might pay $2-4 should prices return to their one-year averages. We have infinite VAR and are going long.