We’d love to have a rant to rant about but don’t. Instead, we have this: 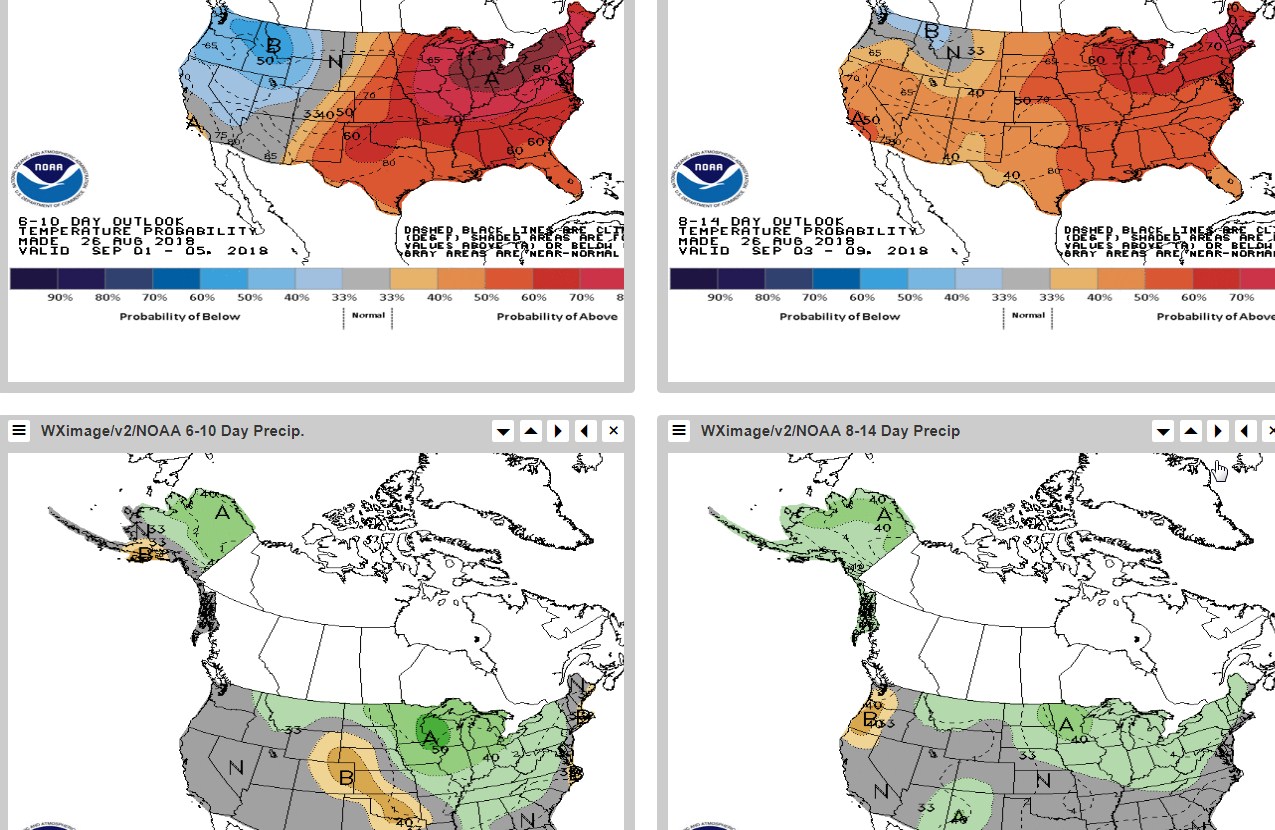 Cool to cold in the Northwest and mild to a slight warming in the south. The northwest has lost its positive precip anomalies, not that those were that important, they weren’t. All in all, it is a neutral to bearish forecast, except for that warming trend in the south. The above is Sunday’s forecast, keep an eye on today’s. 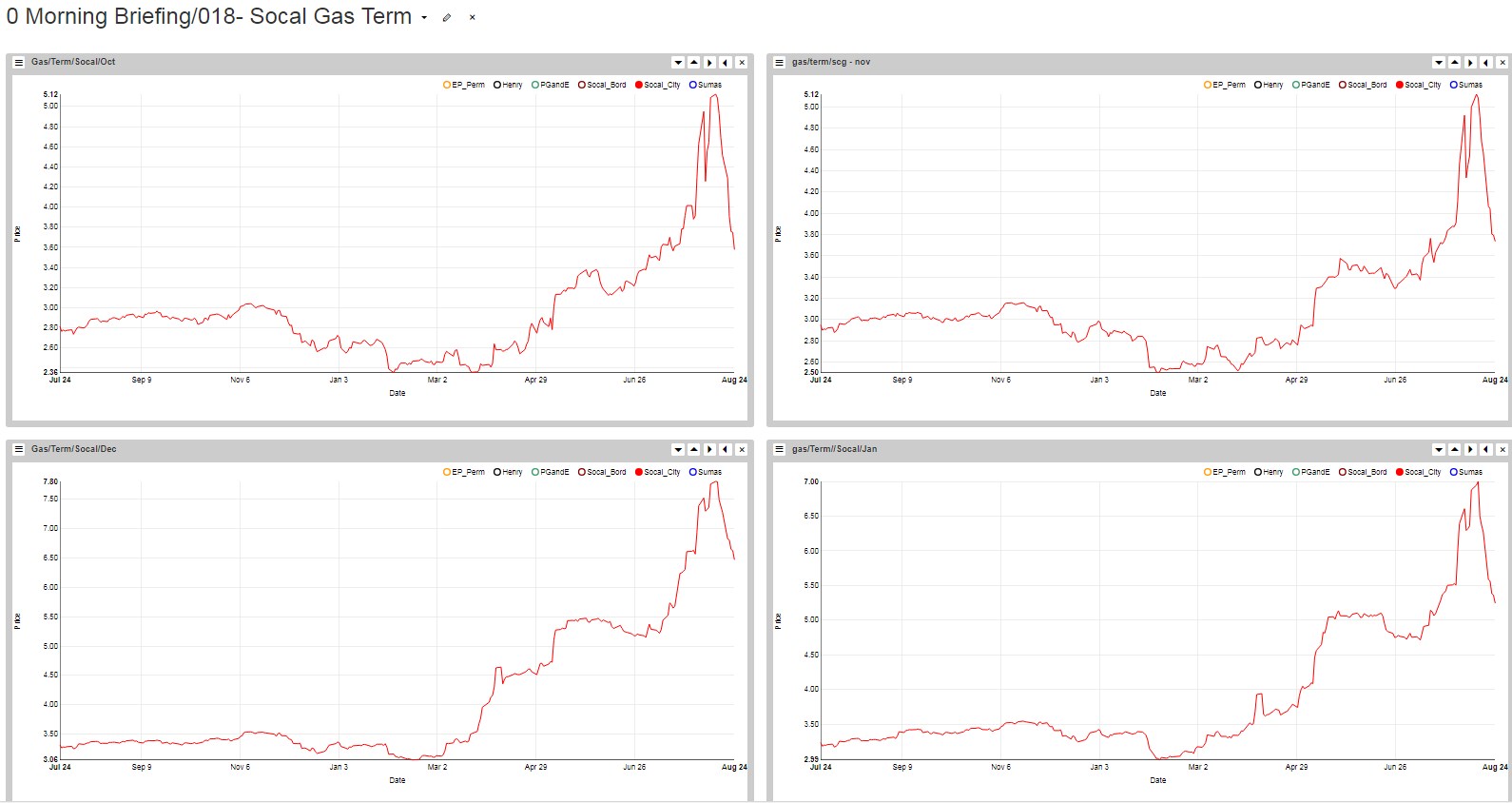 Socal Citygate continues its freefall back to reality, yet substantial premium (to April’s prices) remain. Should that Socal heat build, expect this trend to reverse, as well as this trend… 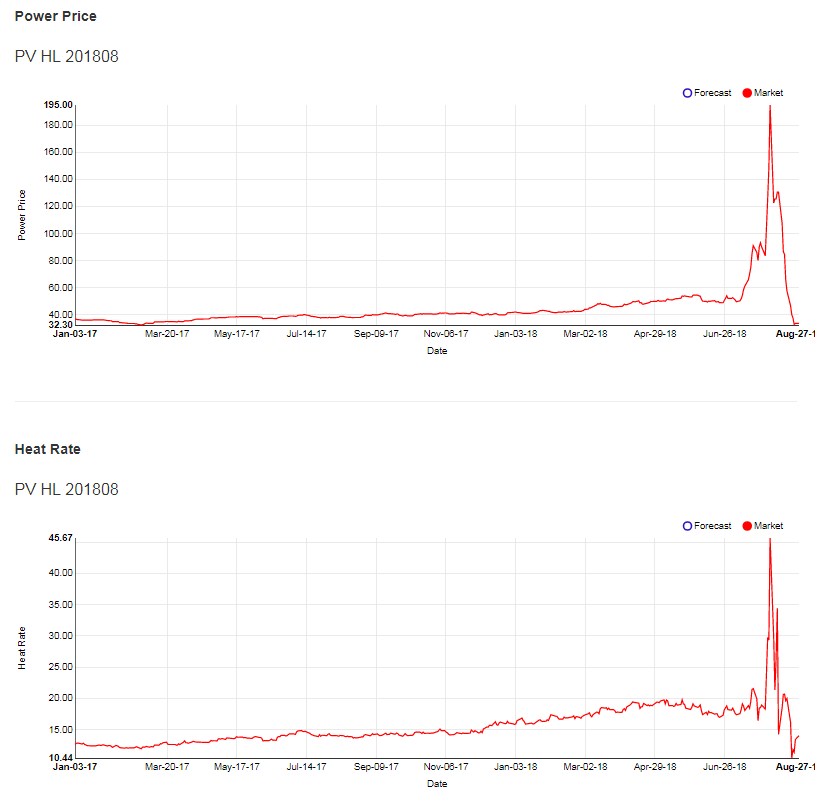 Who would have thought, on August 5, that by the end of the month Palo BOM would be trading at a 16 month low – both heat rate and price? Don’t think this cheapness is limited to Palo … 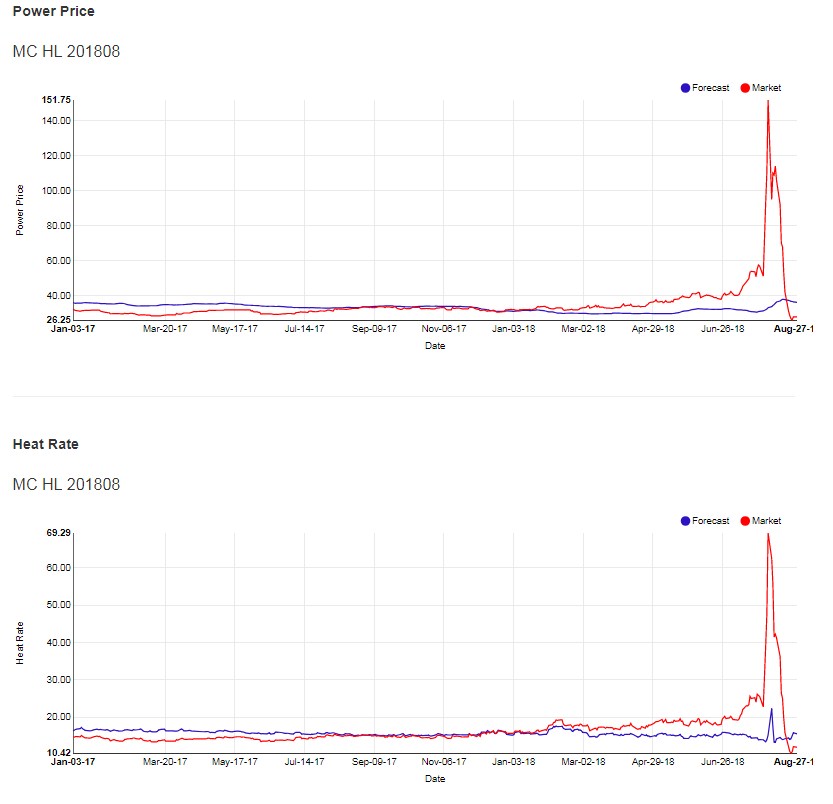 The MidC is the same story, the heat rate hit a chart low last week, and dead cat bounced to still being a low. All of which is being driven by a cash market that is in free fall. 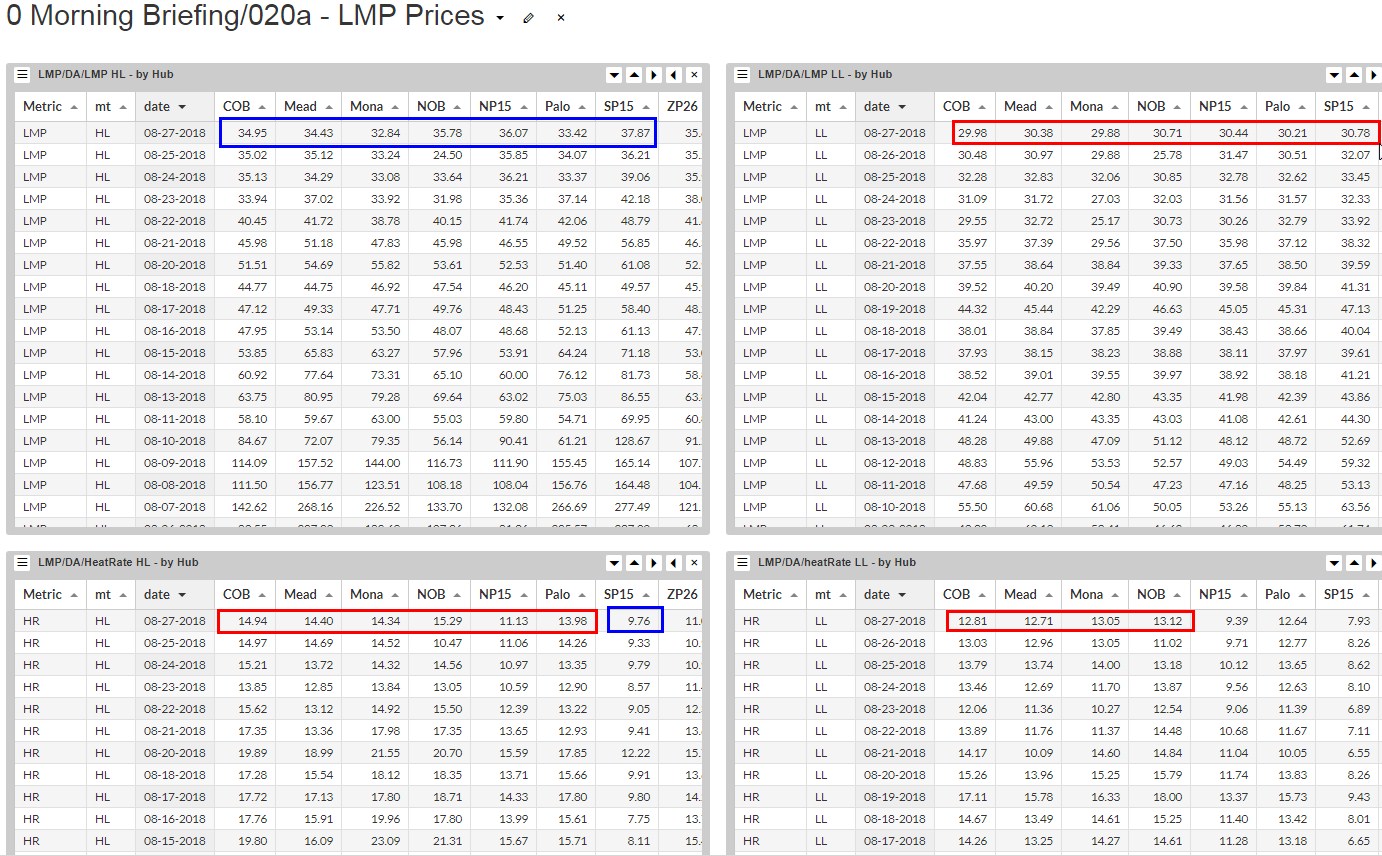 Price wise those LMP DAs seem cheap, but not when you look at heat rates; those 12-13ks reflect most units running, which is the case outside of California: 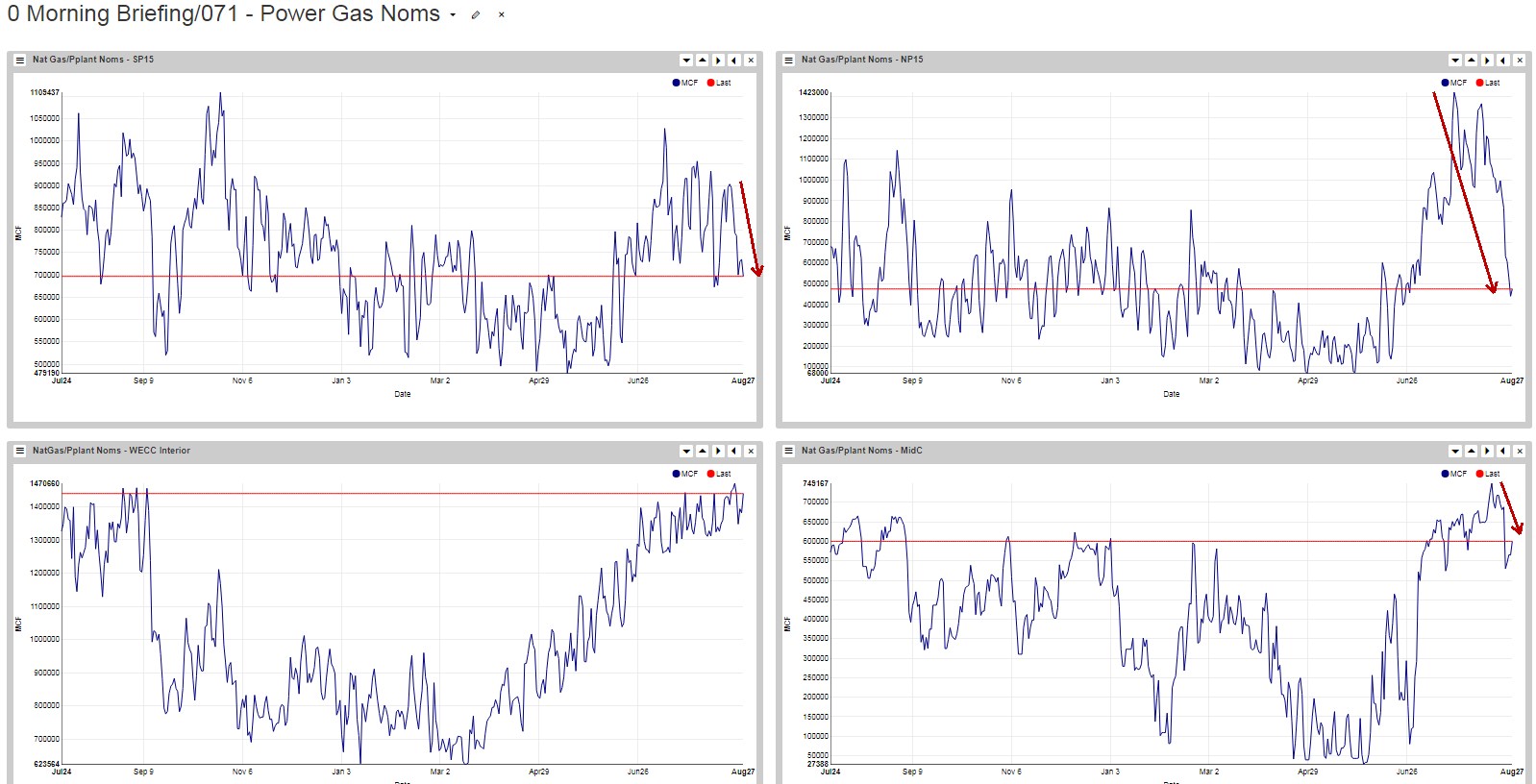 Inside the Golden State, the power gas nominations have collapsed, but not outside. Both Palo and the MIdC remain near summer highs. 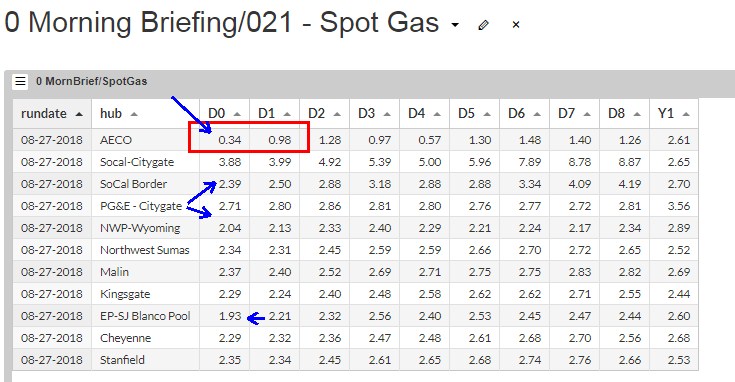 Check out those AECO prices, $0.34/mmbtu? Unreal, why aren’t the wells being capped? Why is anyone still drilling in BC or AB? Oddly, compare the AECO price to Sumas, is that all pipeline profit? And last, the PG&E Citygate to Socal Border spread has returned to status quo. For how long? 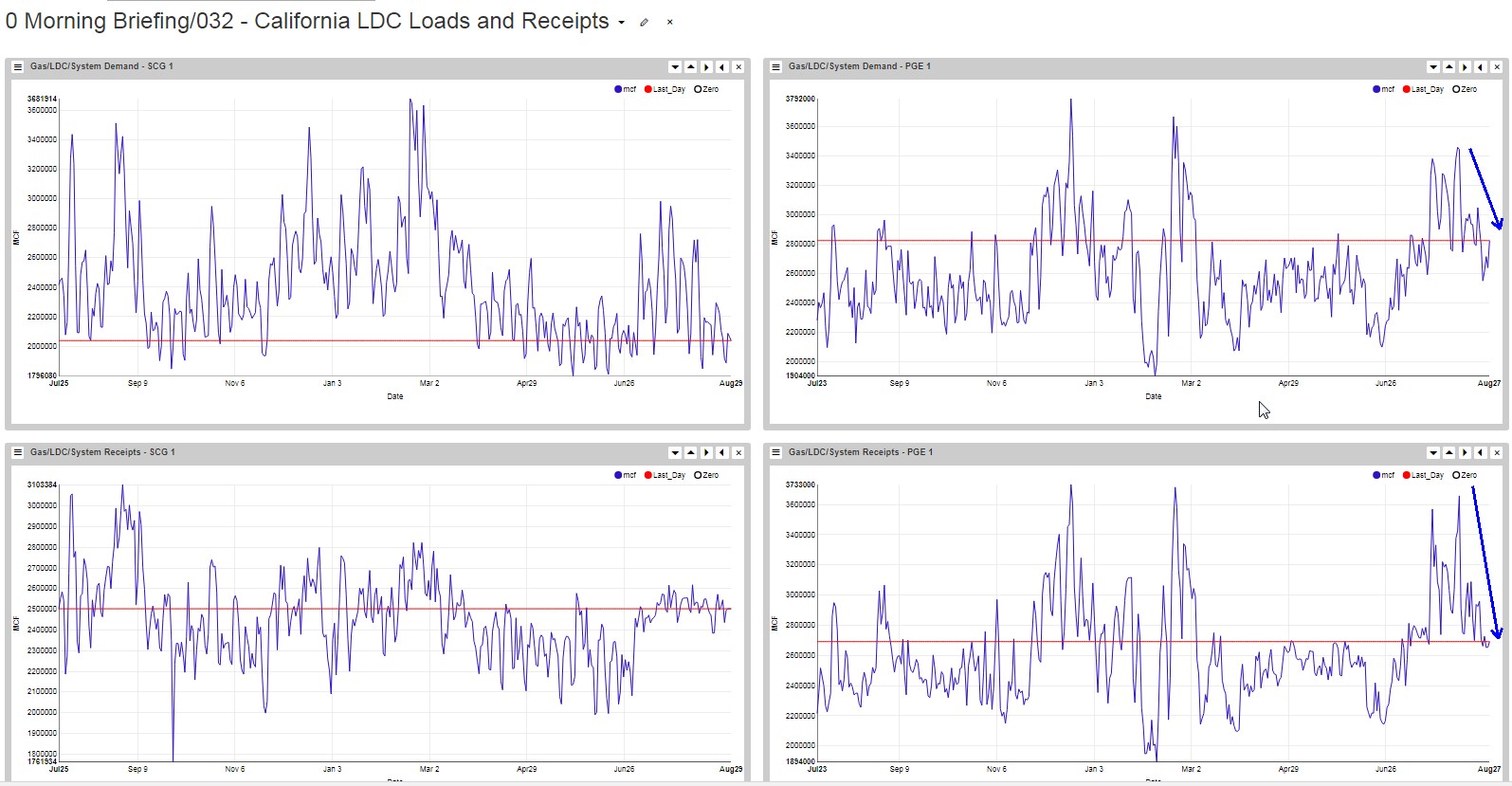 Socal’s fundamentals are unchanged over the last week or so; demand is off, but supply is constant. Not true up north, PG&E saw both supply and demand collapse (Power). Meanwhile, Socal’s storage outlook grows ever rosier (if you’re short or a ratepayer, but hey, that’s the same thing, right?):

Socal’s total storage is at a two-year high and growing. PG&E finally started injecting for the first time in a month, so did Jackson Prairie. 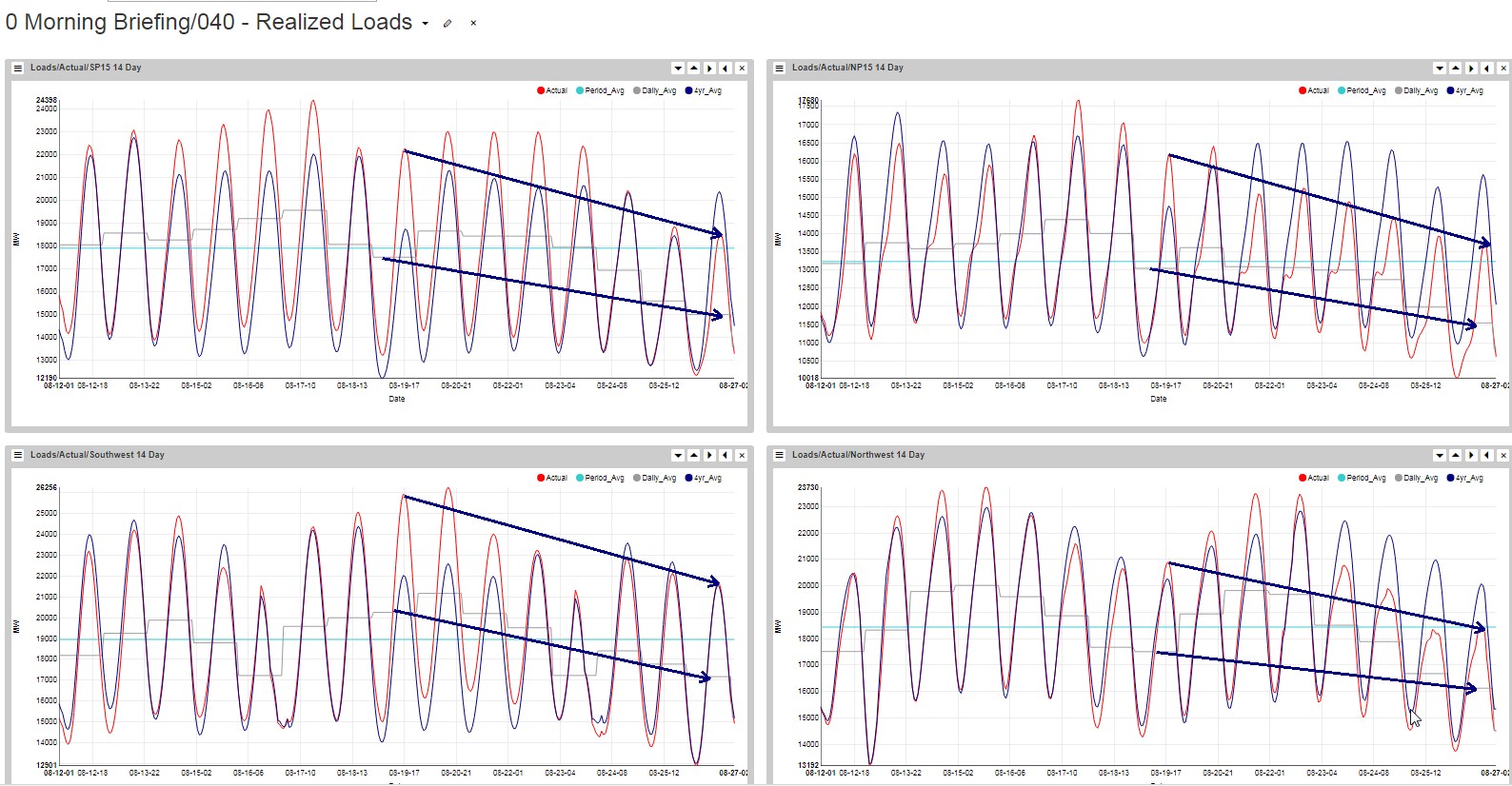 Loads collapsed, week-on-week, across the WECC, every hub is way down. 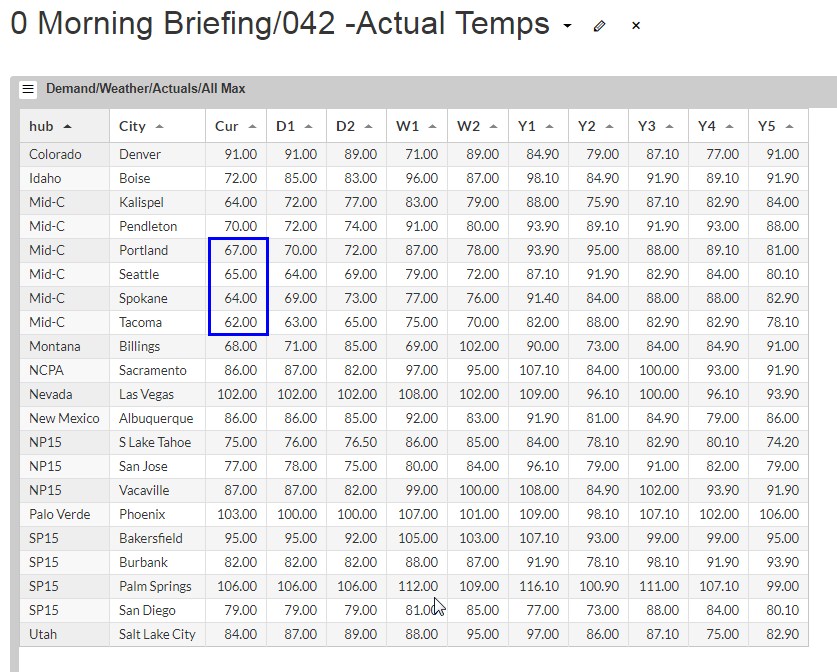 Check out those frigid Northwest temperatures – the 60s! Most of the WECC will grow warmer. 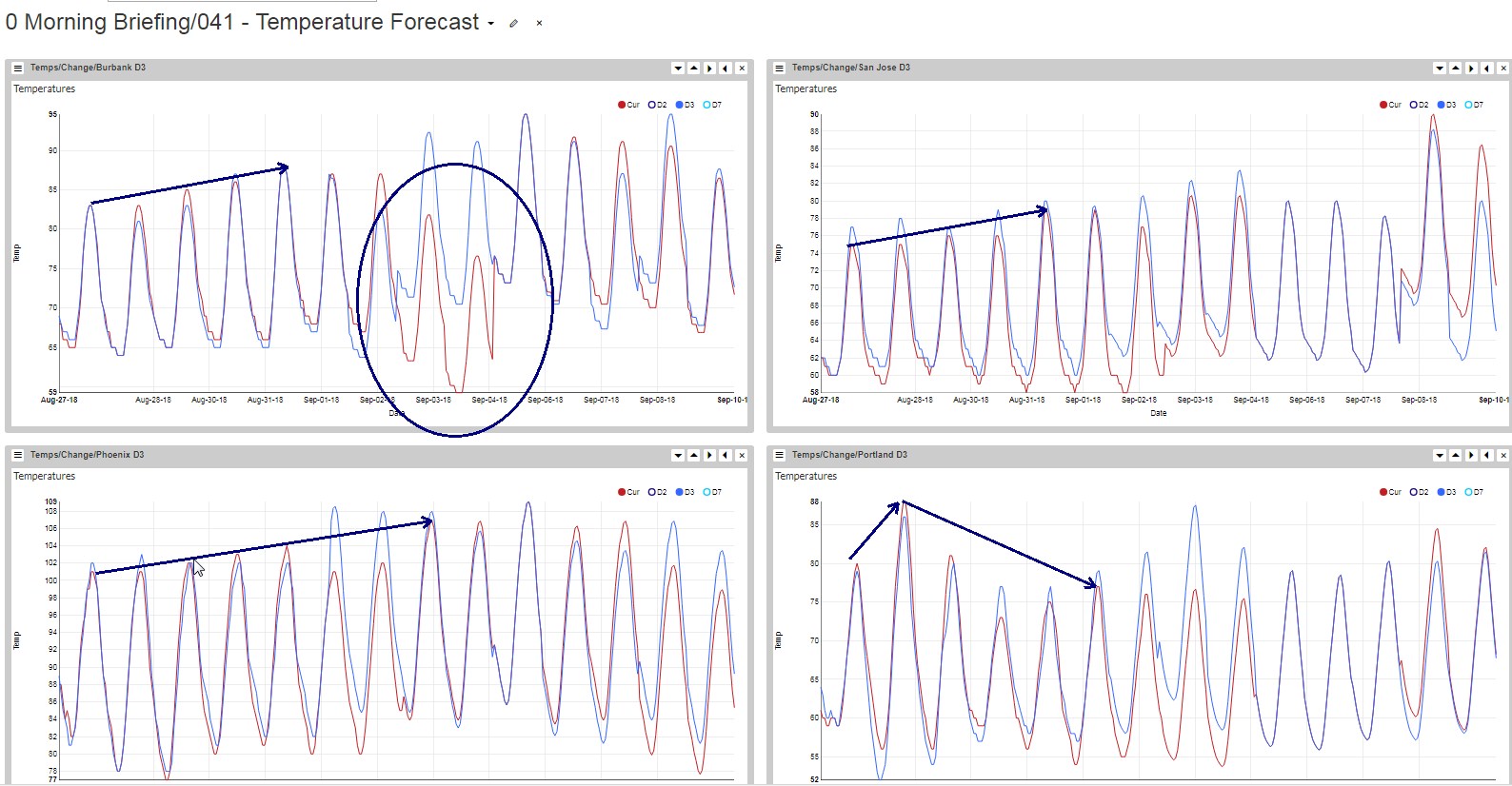 No city gets hot except Phoenix which is projected to approach 108 by next week. Portland rallies for a day and collapses back to low 70s. San Jose is mostly sideways but with an upward drift. Burbank steadily grows but check out the changes in the 7-10 day; the latest forecast collapsed relative to three days earlier.

Solar is stable in the ISO, and the Northwest finally saw big wind; after a month of begging for it, and not getting any, now it comes, just when it’s not needed. Go figure.

Our forecast for the MidC shows wind coming off later in the week, same at SP, while NP is mostly sideways. Total WECC wind energy is forecasted to grow through Wednesday, then sideways.

Who’d a thunk we’d post a precip in August? These are projected daily totals in inches for six Northwest stations. None amount to much, anything that falls will be soaked into the ground. The only respite for Northwest hydro is the abatement of spill scheduled to begin on Saturday. That will only make the Northwest longer unless BPA cuts total discharge, which most likely they will. But in the next crisis, if there is a next one, the feds will have more bullets; end of the spill is bearish no matter how you spin it. 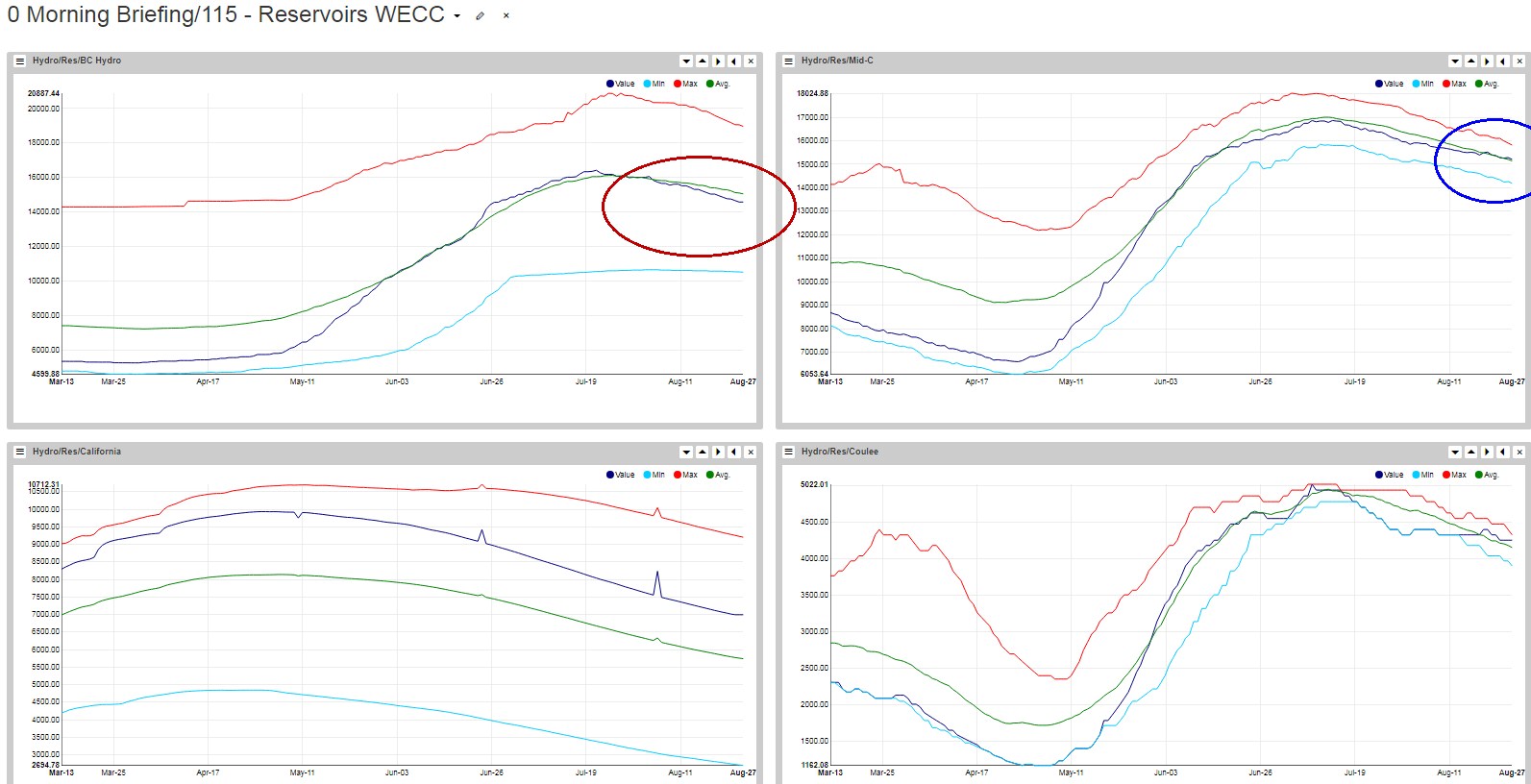 BPA’s reservoirs are now above average, all at the expense of its treaty water in BC which is below average.

Significant changes afoot for our neighbors up north. Arrow discharged has collapsed, so has the Peace. The latter because BC doesn’t need the energy; if its 66 in Seattle its 64 in Vancouver. Not to mention energy is now flowing north-bound on the Northern Intertie. 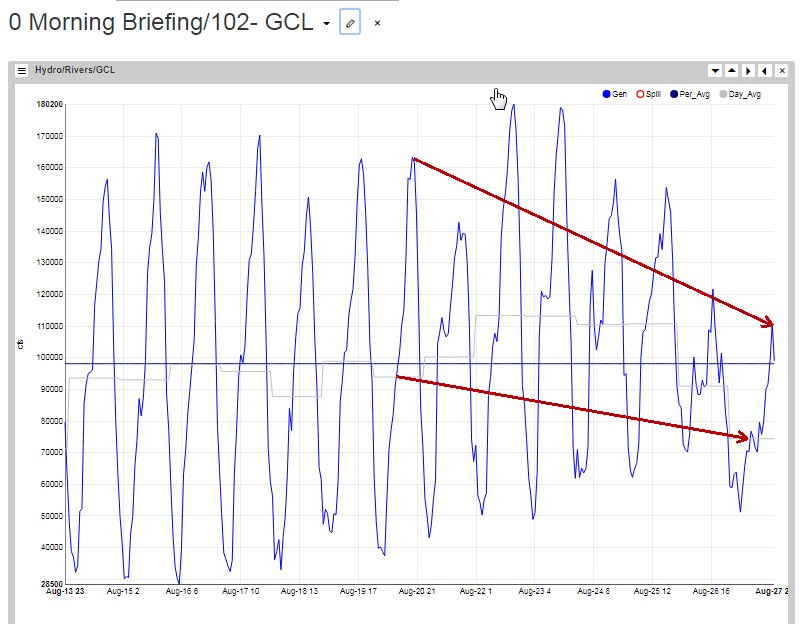 Energy production at Grand Coulee is off only because BPA doesn’t need the energy.

The rest of the mainstem was up on Sunday, not sure why given that the system was long off of wind. 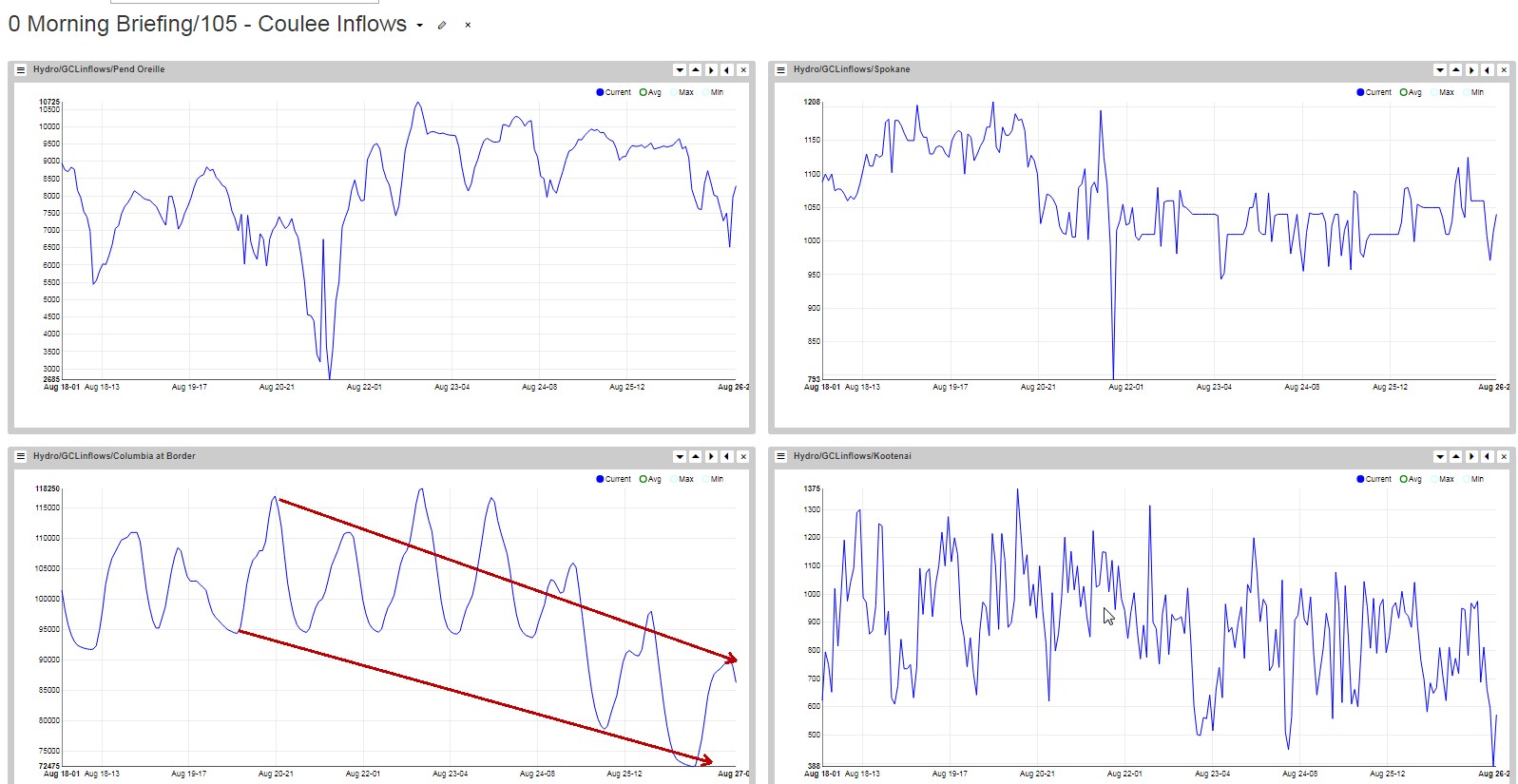 All of those Canadian changes have hammered inflows at the US border. The rest of the rivers above Coulee are sideways, though at seasonal lows. 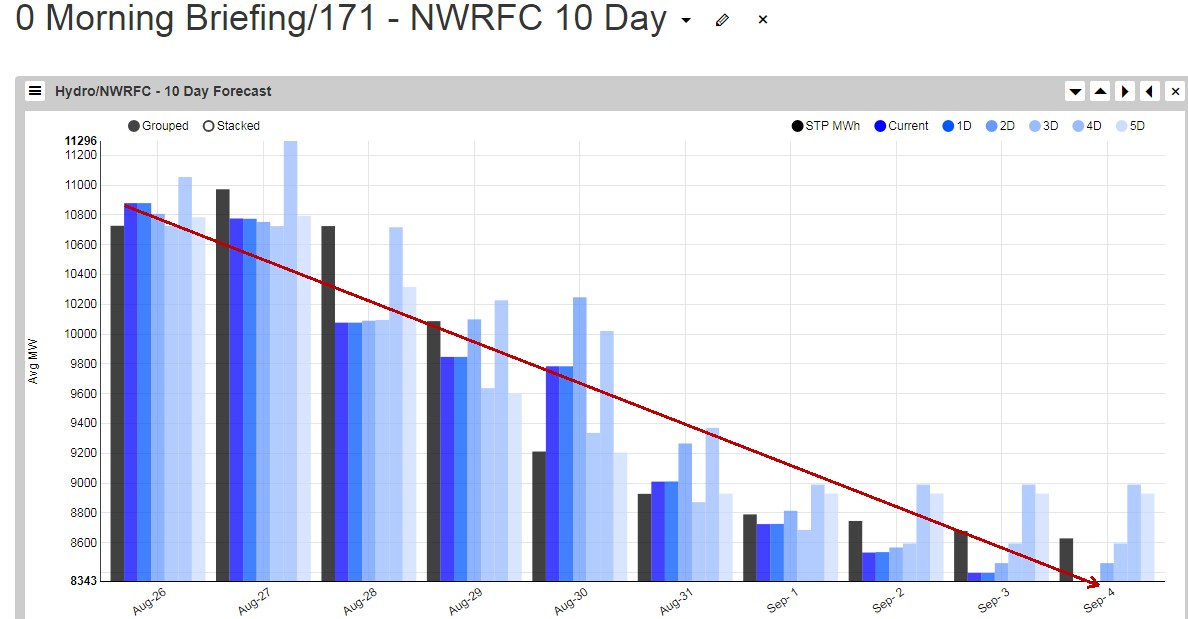 The NWRFC’s ten-day forecast has dramatic cuts in water but don’t confuse that with energy; these merely reflect the expiration of spill. As for today’s STP, we will stick with our expectation of increases in November. 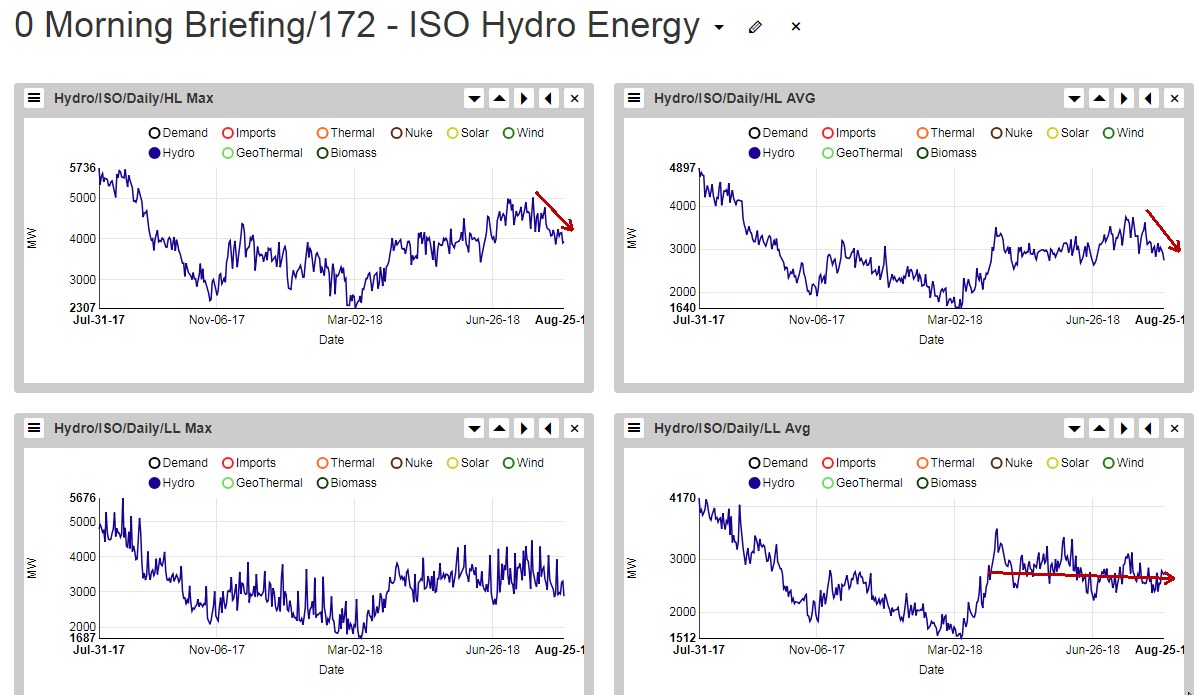 The ISO has backed down its reservoir drafting; peak water is off the most. Off-peak is just sideways. 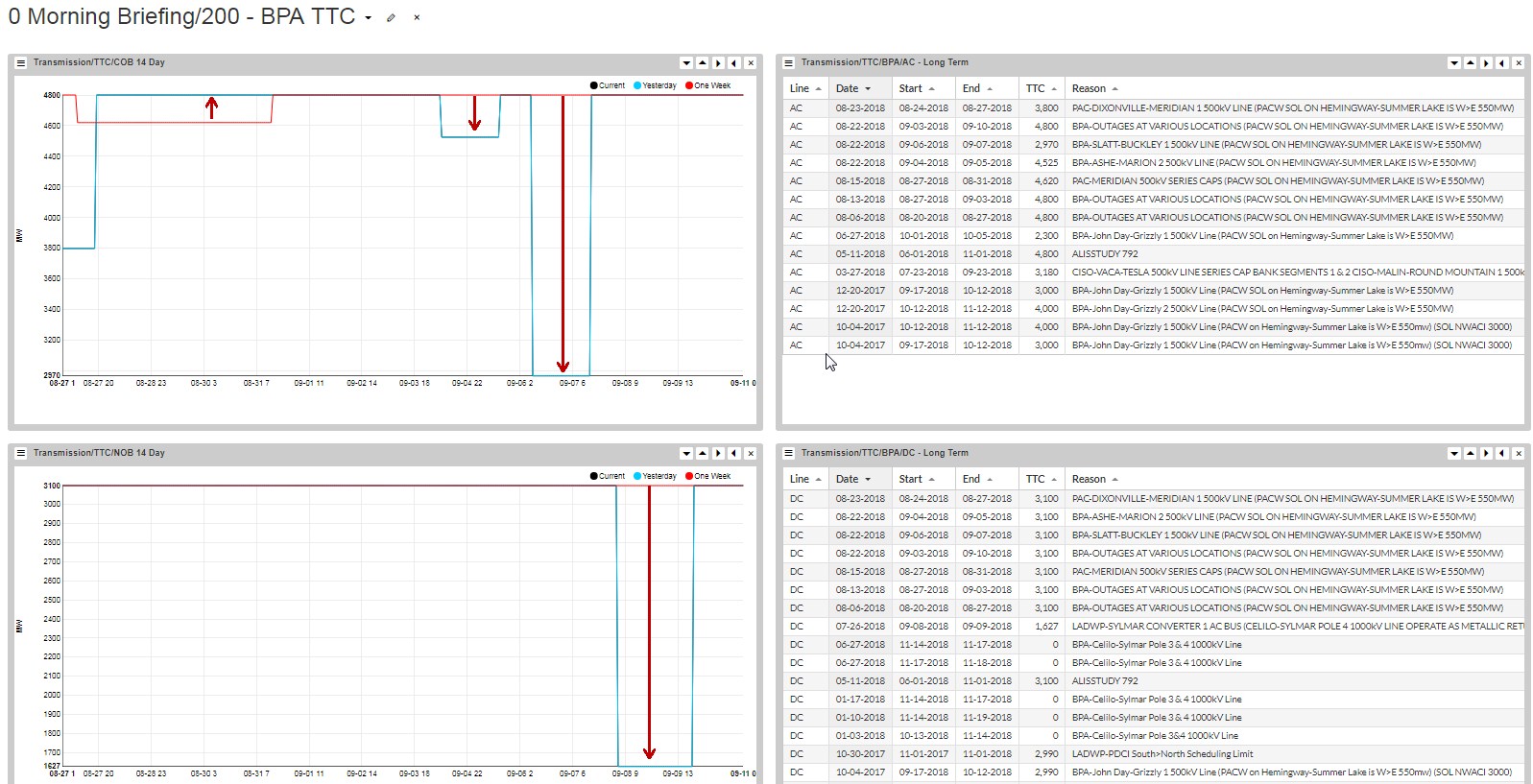 Some new cuts in TTC, see above. 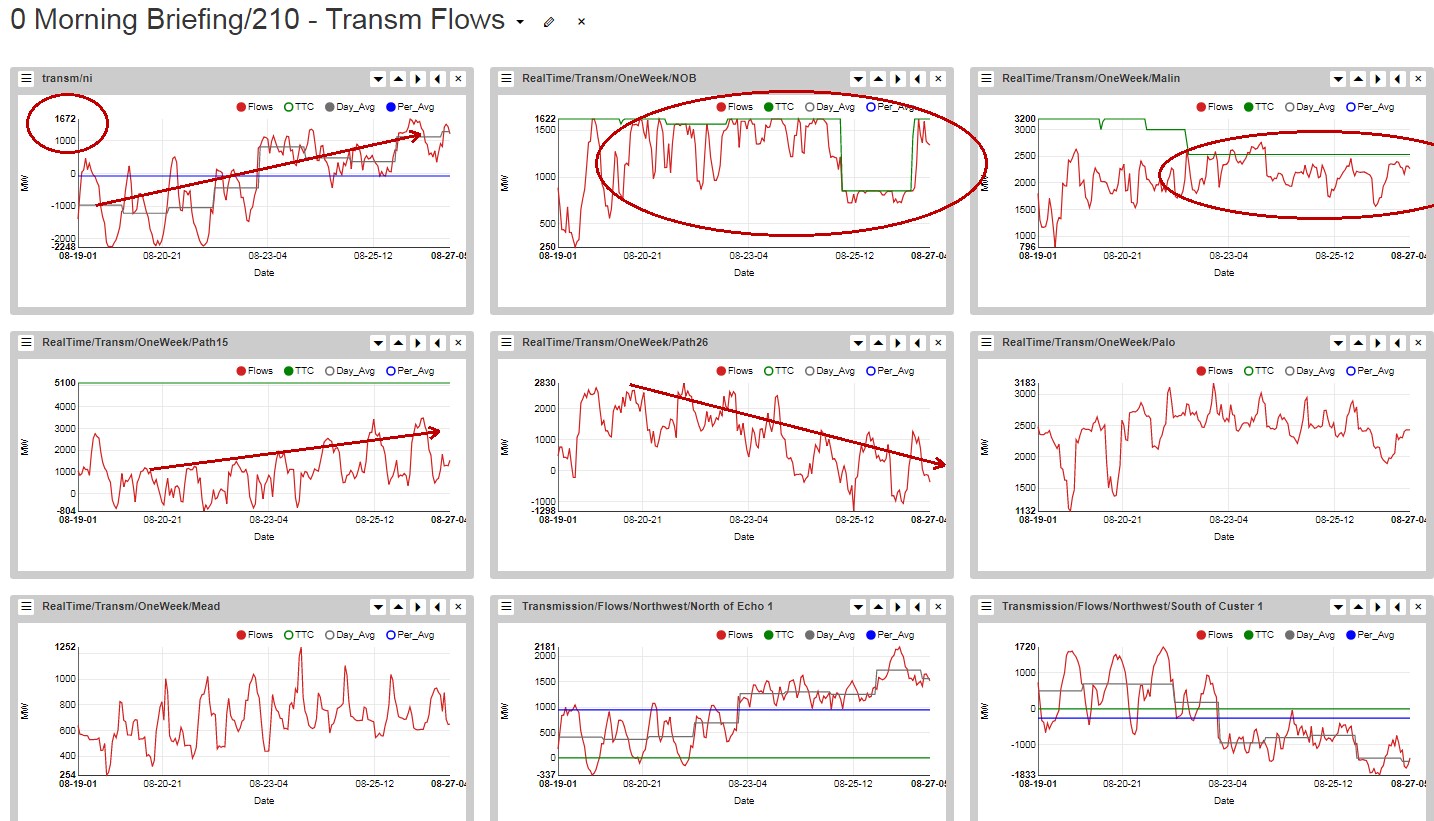 Summer isn’t over, and Socal Gas’s problems haven’t been fixed. Cheap has always been a strong buy signal to me; I’d be placing some long wagers just about anywhere, though SP would be first on the list. Remember, last year the ISO set a high (load and price) in the second week of September. Recall too that every year there has been an October surprise.