They say Big Oil hates solar, we’re not so sure that’s true, but we are confident electric utilities should hate roof-top solar which is also frequently called Distributed Generation (DG). We’re not sure why Big Oil would care much about solar, the electric industry burns very little oil for power generation. Big Oil should fear electric vehicles (EV), not DG. 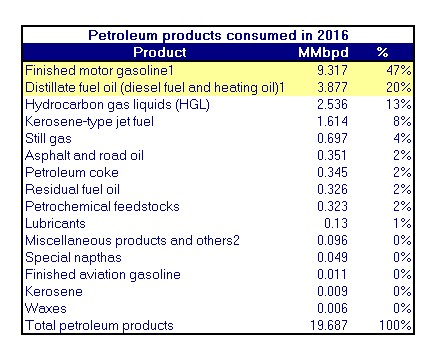 A case can be made; it already has been made, that someday most vehicles will be battery powered. Should that happen, and we think it is inevitable, the oil industry stands to lose its primary source of demand. Per the EIA, that demand decay will exceed 50% of total demand.

But this article is about DG, not EV, which brings us back to our point that Big Oil shouldn’t care about DG, only EV. The electric industry doesn’t have much of an appetite for dirty oil, the industry once burned a lot of oil, not any longer.

Over the last ten years, the total oil burn by the electric sector doesn’t even register; it hasn’t since 2010. So, Big Oil shouldn’t care about DG, though the press and most of the public seem to think they do. Utilities should, at least those utilities that have let their retail rates reach levels that support DG.

Let’s take a closer look at these four western US IOUs:

All rates are in $/kwh, and all reflect the latest Net Metering rates. The Average Rates come from EIA’s monthly utility recap. The Peak Rates were culled from the utility’s tariffs. All four IOUs offer a net metering option to their distributed generation customers, those who have installed solar panels. Each has carefully crafted their rates to do the least harm to the utility’s profitability, and APS has been most successful in that endeavor. That utility’s rate for the net solar generation (Solar – Load) is a measly $0.03/kwh during the winter peak solar hours from 10:00 AM to 3:00 PM. The three California IOUs offer a more generous rate for net generation ranging from $0.22 to $0.28/kwh.

But it is the peak rate these utilities should most fear. But, you say, the company is shielded from buying power during those super-peak periods since the sun has set, and there is no solar generation. Correct, unless the homeowner has installed batteries, which is the smart play for both SCE and SDG&E customers.

The arbitrage is for the homeowner NOT to sell back to the utility beyond their internal load and instead charge their batteries. Then, during those peak price hours ($0.533 at SDG&E and $0.48 at SCE) serve load from those solar-charged batteries. This strategy has the added benefit of making the homeowner immune to short-term blackouts.

The table above illustrates today’s rates of returns homeowners in the two IOUs would realize from installing either Solar or Batteries at today’s costs; adding both is nearly-additive, but not quite. A rational person would be drawn to returns above 20%, even 10%. What would happen if every viable home installed solar on their rooftops and batteries in their basements? 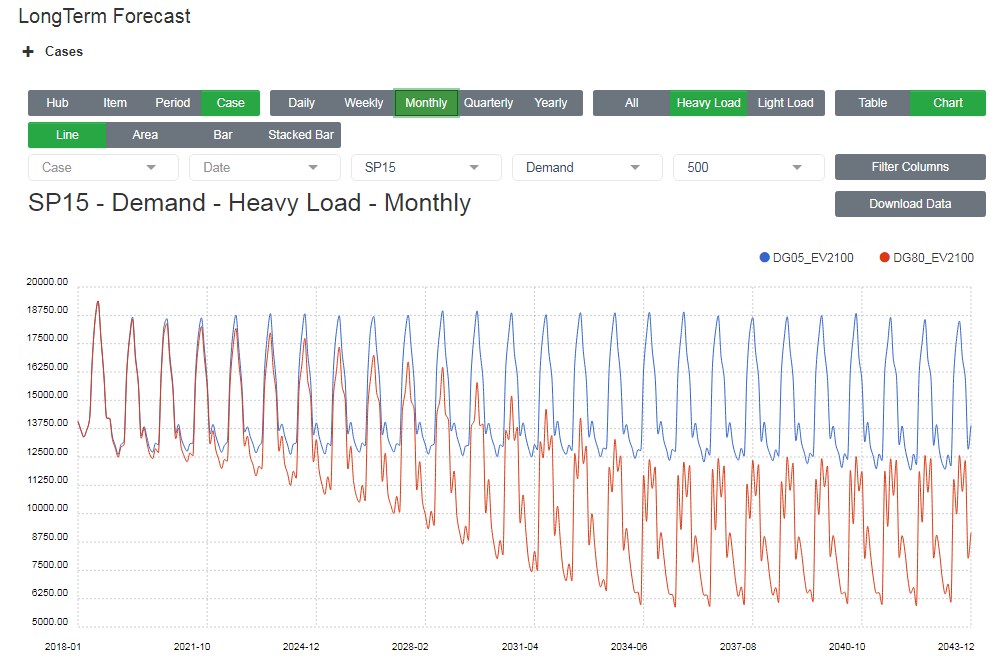 The blue line is Ansergy’s 25 Year Base Case; this assumes no new distributed generation and uses the EIA’s electric vehicle forecast (very conservative). The red line assumes an 80% DG adoption rate using current annual growth rates (see EIA 861M). By 2034 the SP15 IOUs will have lost 6000 aMW of demand. Of course, that value is net of base demand load growth which includes GDP and population growth, plus the EV demand.

The utility-level impact from DG is more severe when split out from base load growth.

Edison reaches a peak decay of 8000 MWs by 2034. Ansergy’s 25-year forecast service offers hourly load data for all the WECC’s utilities. Drop us a note if you’d like more information: [email protected]

Imagine what happens to the IOU’s rates while this is taking place. Let’s be generous and assume that total revenue requirements are unchanged, a highly dubious supposition given their track record. Rates are set by dividing energy sold (the denominator) into revenue requirements (the numerator). Per the above plots, both utilities could see their denominators drop 40% which would drive a 67% increase in retail rates. We’ve already demonstrated 20-30% IRRs with existing rates, a 67% increase would drive IRRs more than 50% and further accelerate DG adoption rates.

Therein lies the IOU death spiral. High rates drive DG adoption; DG adoption drives ever higher rates which drive faster and deeper DG adoption rates. Where does it end? Before answering that question, there is one additional impact of DG on power markets. That is on the wholesale prices.

A decay of load can only result in a drop in heat rates (typically that means a reduction in power prices unless fuel is rising faster than loads are dropping). Fortunately, the California utilities divested of their generation years ago; now the bag is held mostly be the gencos, though you can throw in some private equity too. 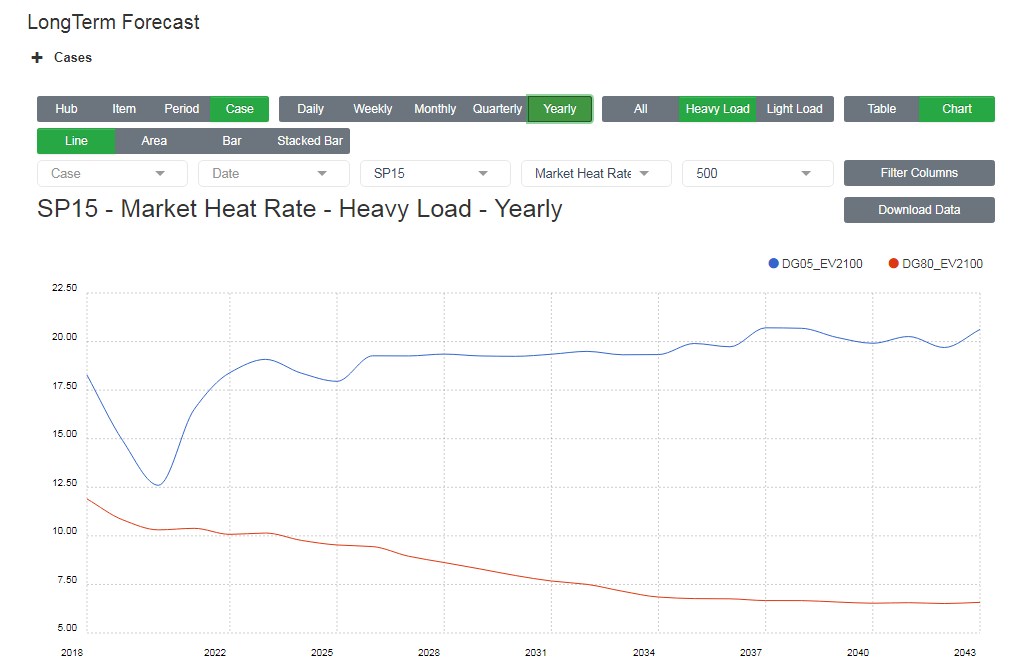 This plots Ansergy’s 25-year forecast heat rates for SP15 under the two previously described cases. By 2030, SP’s heat rate has dropped below 7500, and every genco will have no choice but to write off their investment (at least per the case ran). The point being, the DG pain is not restricted to the IOUs, the impacts are far and wide.

The IOU has two choices, let’s explore those.

You can call this the “APS” solution because that utility aggressively discourages DG by lowering the rate they pay the homeowner ($0.03 during peak solar hours vs. $0.23 during peak load hours). The utility could try to eliminate two-way metering, or it could lower the rate paid to homeowners for net generation. Neither will work. Already, batteries make sense, and most homeowners will soon pull their two-way meters and store excess solar KWH in those basement batteries. Lowering rates requires CPUC approvals, not an easy thing to do in a green state like California. Even if they could, the battery factor will mitigate this strategy’s effectiveness. In other words, there is nothing either Edison or San Diego can do, rate-wise; because of batteries.

Another option is to accept the fact that they, the utilities, dug this hole through many years of collective ineptness. Instead of fighting back, embrace the new world by facilitating more DG. A friend who is in the business suggested utilities should be the ones installing and servicing residential and commercial solar systems. At least this would provide some revenue streams.

The first step in accepting reality is to realize that a significant percentage of the rate base is unrecoverable. Think of rate base as the family dumpster which never empties. Each broken or discarded object throughout your life is in that dumpster, and none of it has any value. Most of a utility rate base is that family dumpster, a collection of every misguided boondoggle investment they ever made, yet they are still recovering a return from those collective mistakes. The utility needs to write off all non-performing “assets” in ratebase.

Of course, this means a massive haircut to stakeholders, but for once those stakeholders do not include the ratepayers. DG is their cloak of invulnerability; if the utility tries to raise rates, the homeowner will disconnect from the grid. Instead, the stakeholders who must eat these costs are the equity and debt owners, plus the employees themselves. Utilities need to be leaner and meaner meaning they need to lay off non-essential staff.

Fortunately for most of the nation’s utilities, they do not charge their customers rates high enough to support DG. Never before have electric utilities had more incentive to control costs than now. Otherwise, they’ll be looking like their friends in Southern California. However, rate creep and declining DG costs will soon put many more of them at risk.