The weather has seemed to take a turn to the bearish side of things; finally, the endless summer is winding down and so are energy prices, but first the weather. 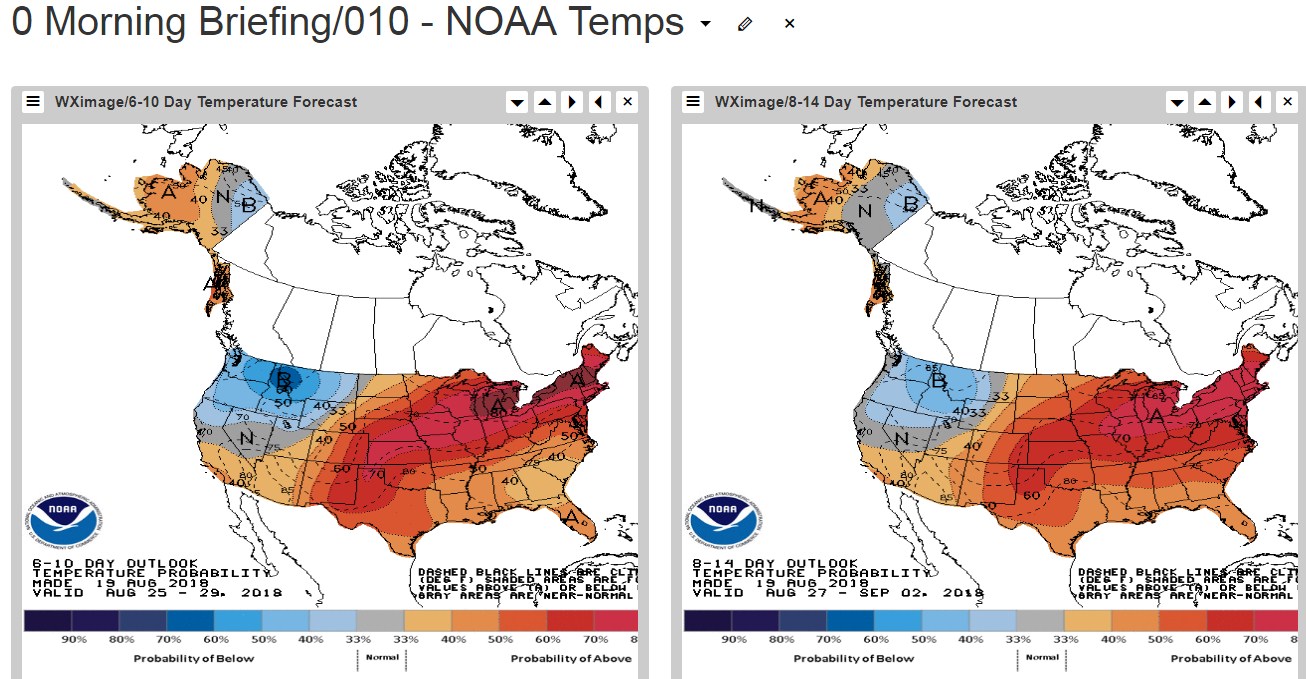 That’s dark blue over Coeur d’Alene Idaho, and if it were January we’d be “hot” and bothered, but its August and we aren’t. Loads will tumble across the Northwest; there is little doubt of that and, on top of a cooling trend, there is some precip coming. 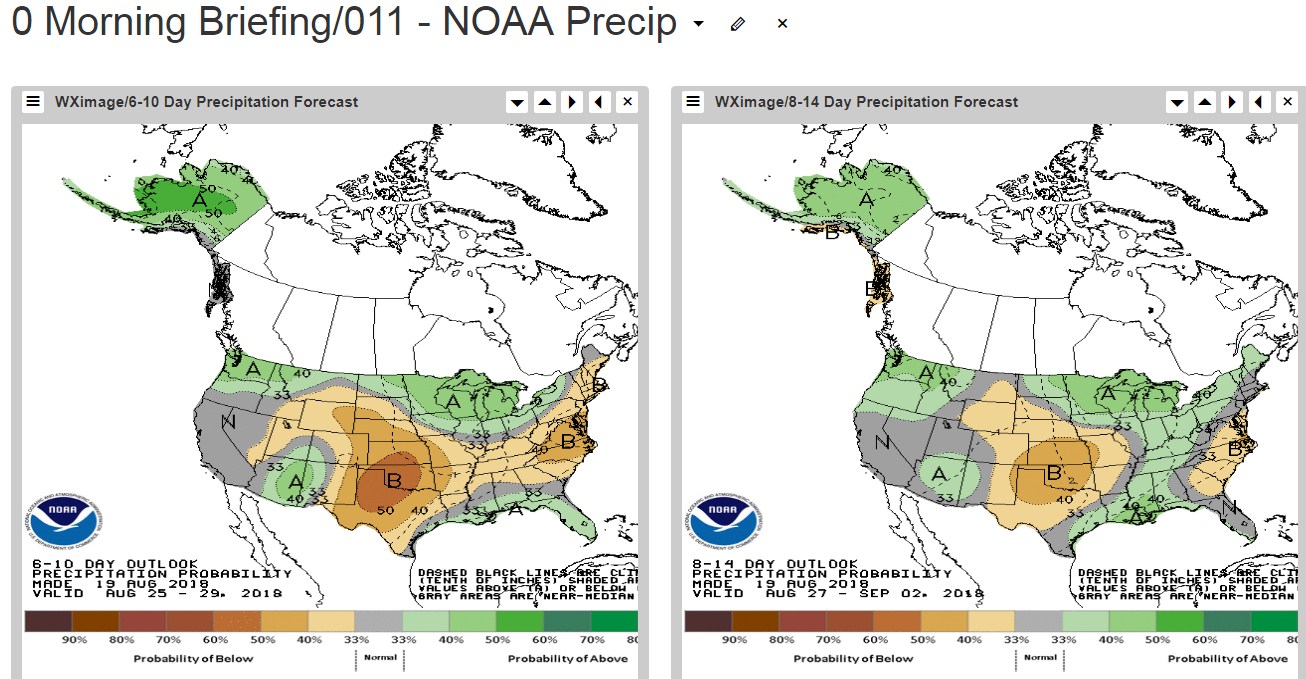 If we saw those anomalies in November, we’d partially raise one eyebrow, in August they barely warrant a stifled yawn. But still, its a different pattern than the last eight weeks and every trend since man first climbed down from that Baobab tree have always begun with a Day One. PV gets more monsoons, too.

Did we mention markets slipped a bit? 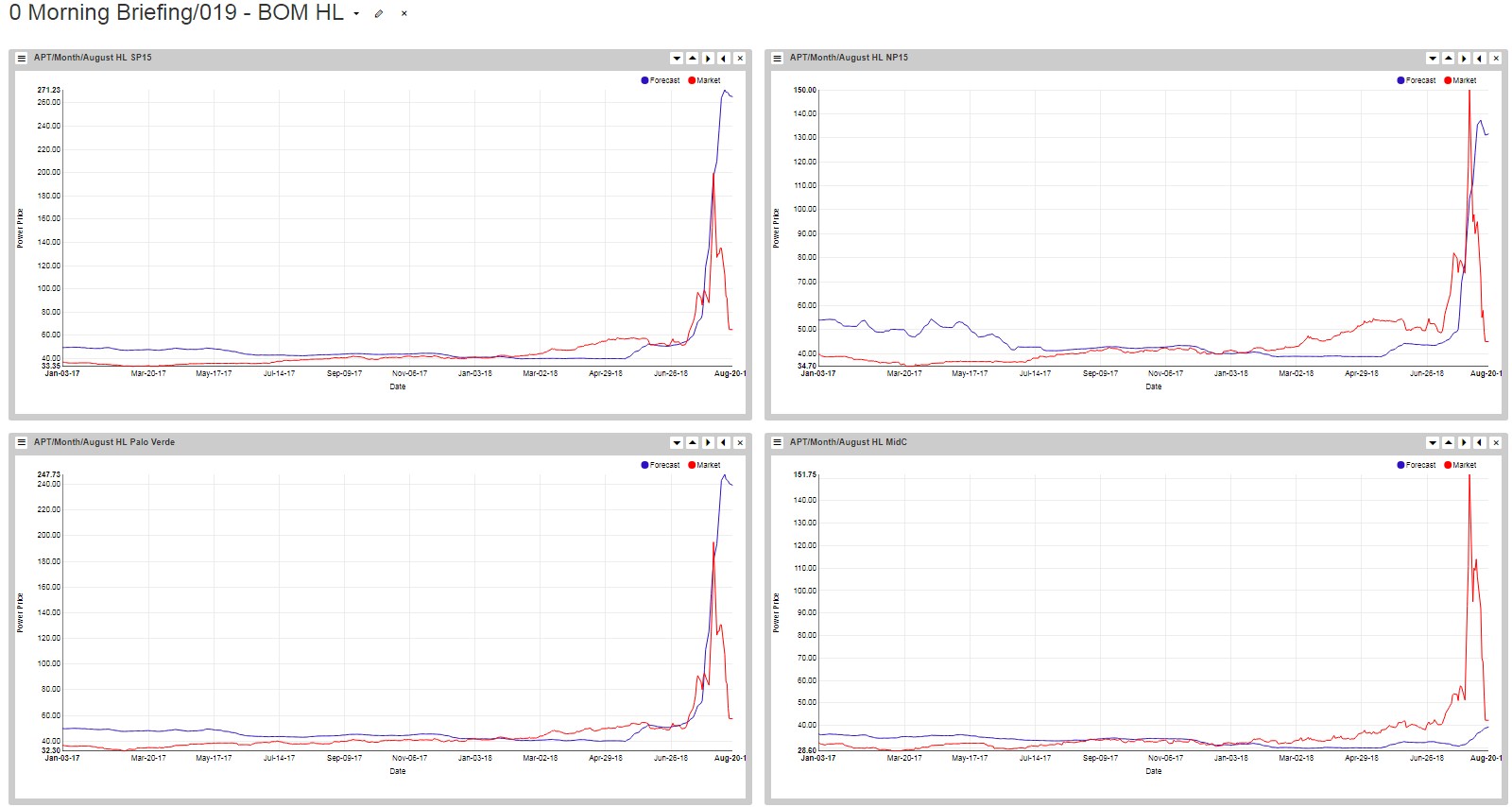 The BOM is about back to where it started in mid-July, not quite there but getting a lot closer than a few weeks ago. What’s most amazing about that chart is the timing of the prices. The spikes occurred when the BOM was 90% full; today it is but 30% left. So the pain of being caught holding the proverbial smoking gun (long) was magnified. 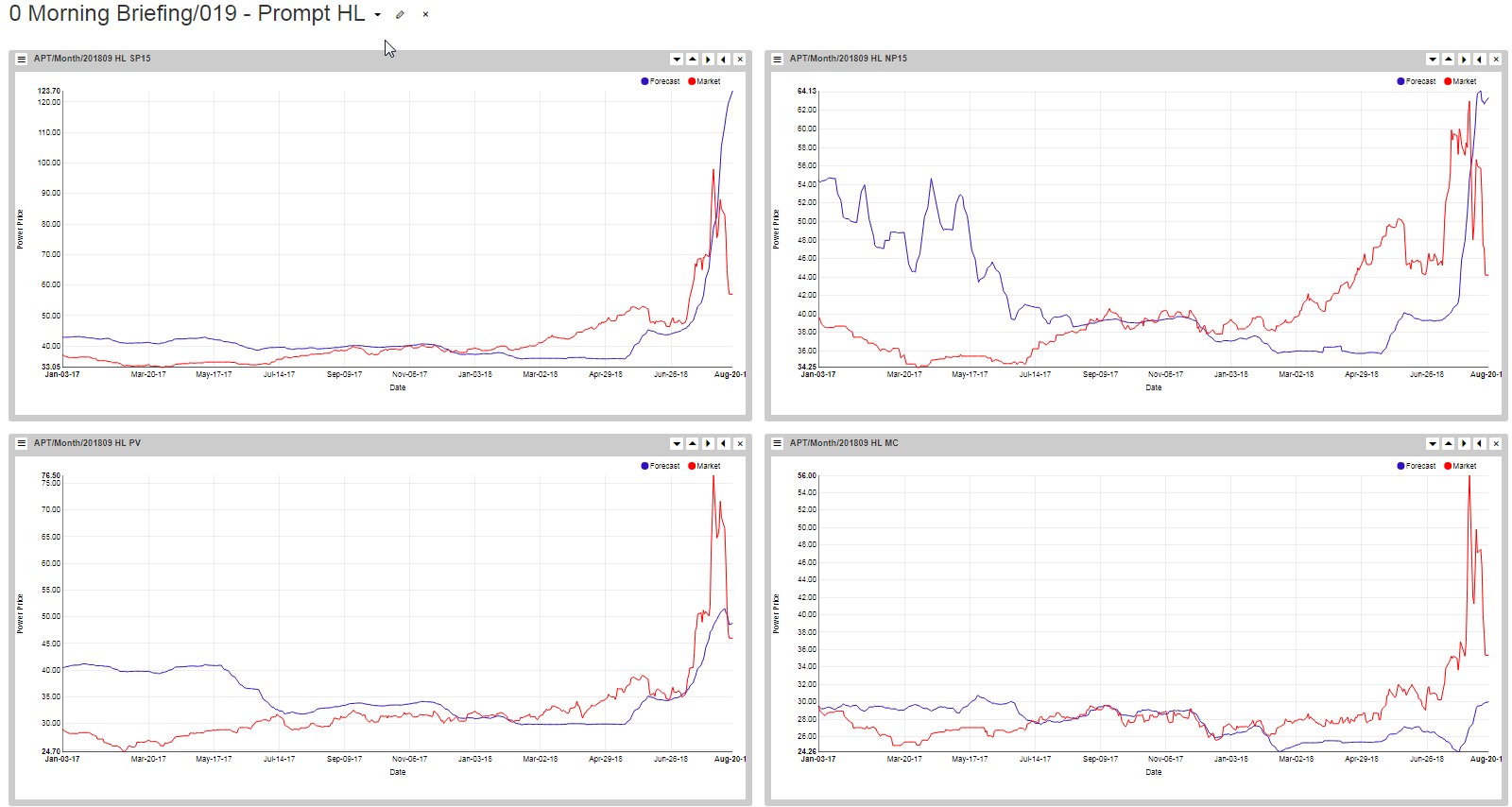 Prompt’s off, too, but the MWH stays the same; still, it’s a massive move. I think we wrote at one point that Summer 2018 was set up to be the greatest short ever, and it seems to be the case, though summer is not over. Last year’s peak SP demand occurred in the second week of September; the season isn’t over … unless a new trend has taken over. 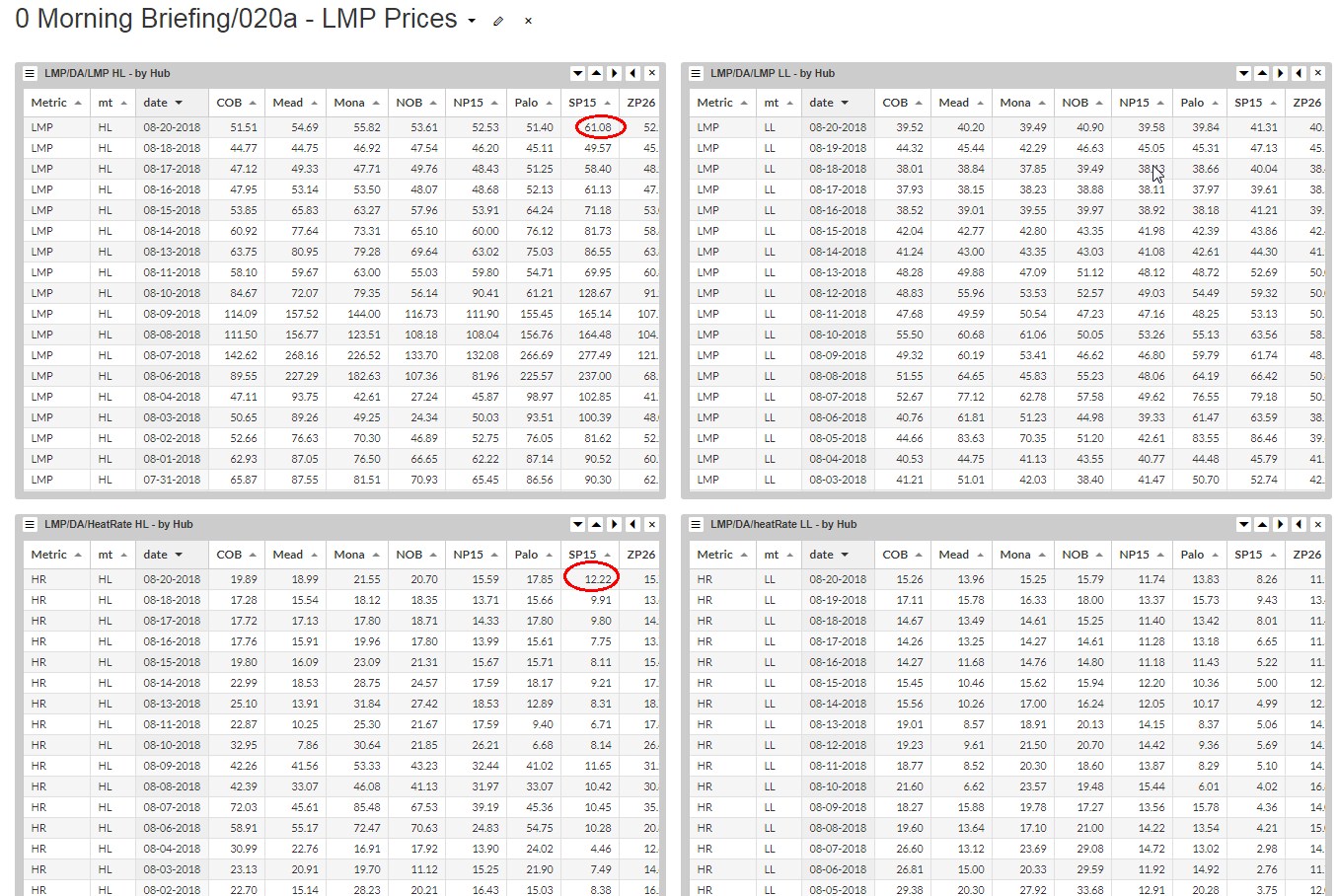 LMP prices are pulling back (which is why the term pulled back), but not SP’s heat rate, it jacked to 12k off the lowest Day Ahead post in weeks. I guess gas came off… 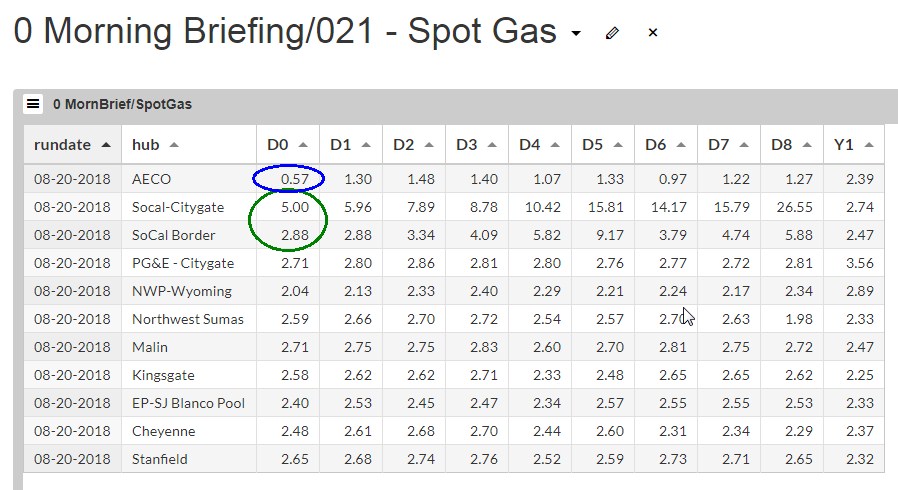 Wow, border is almost beneath PG&E, and Socal Citygate has a five handle. Look at pitiful AECO, posting $0.50, but that’s a weekend number, and we’ve seen it before, it will bounce back to a buck, which is still cheap. You’d almost think the Canadians would be capping their gas at that price, or at least stop drilling. 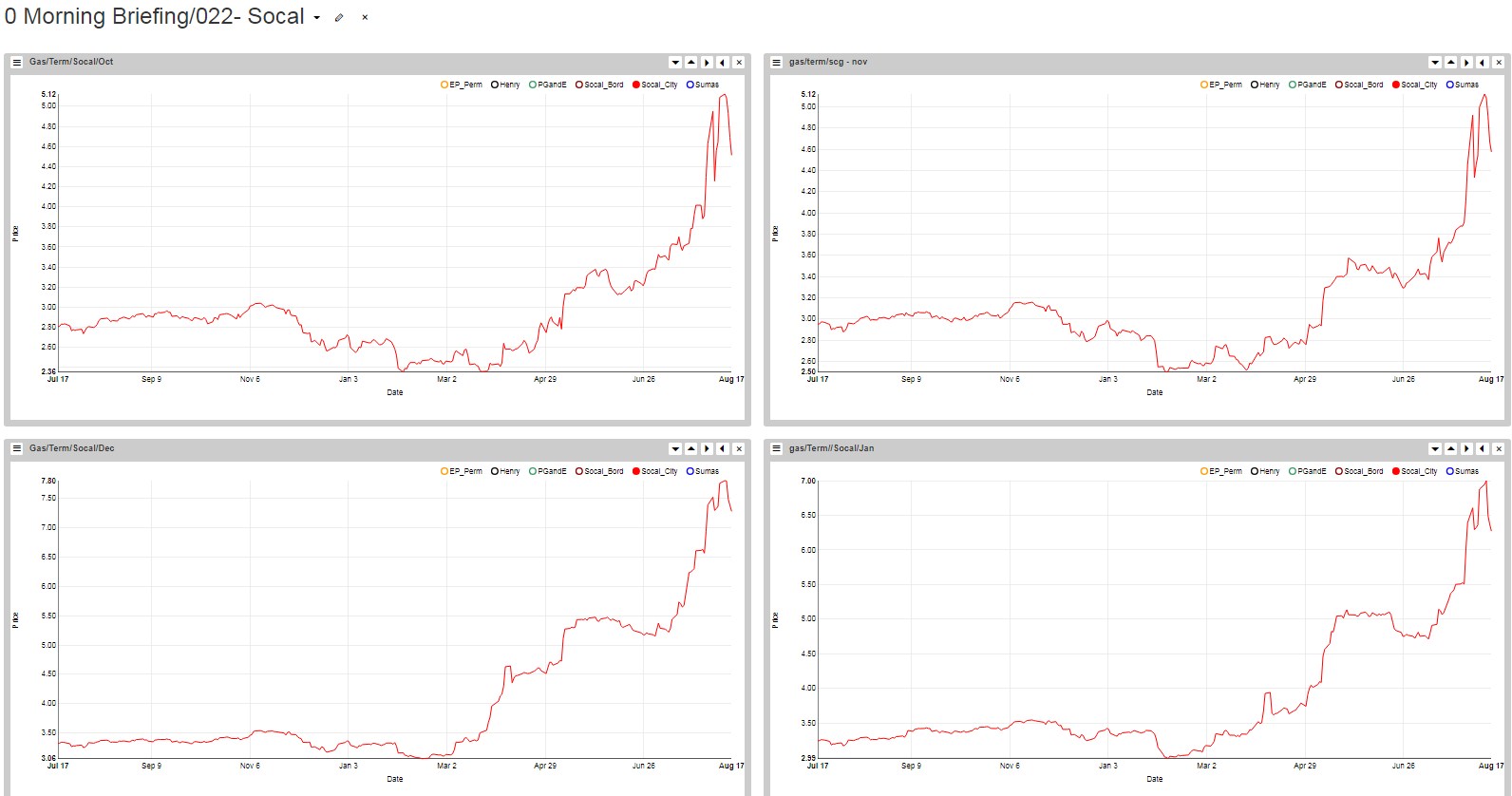 Spot tanked, but term Socal hasn’t come off much. Is that the next shoe to fall? Kind of doubt it, not without Socal Gas restoring its import capacity and that isn’t happening any time soon. 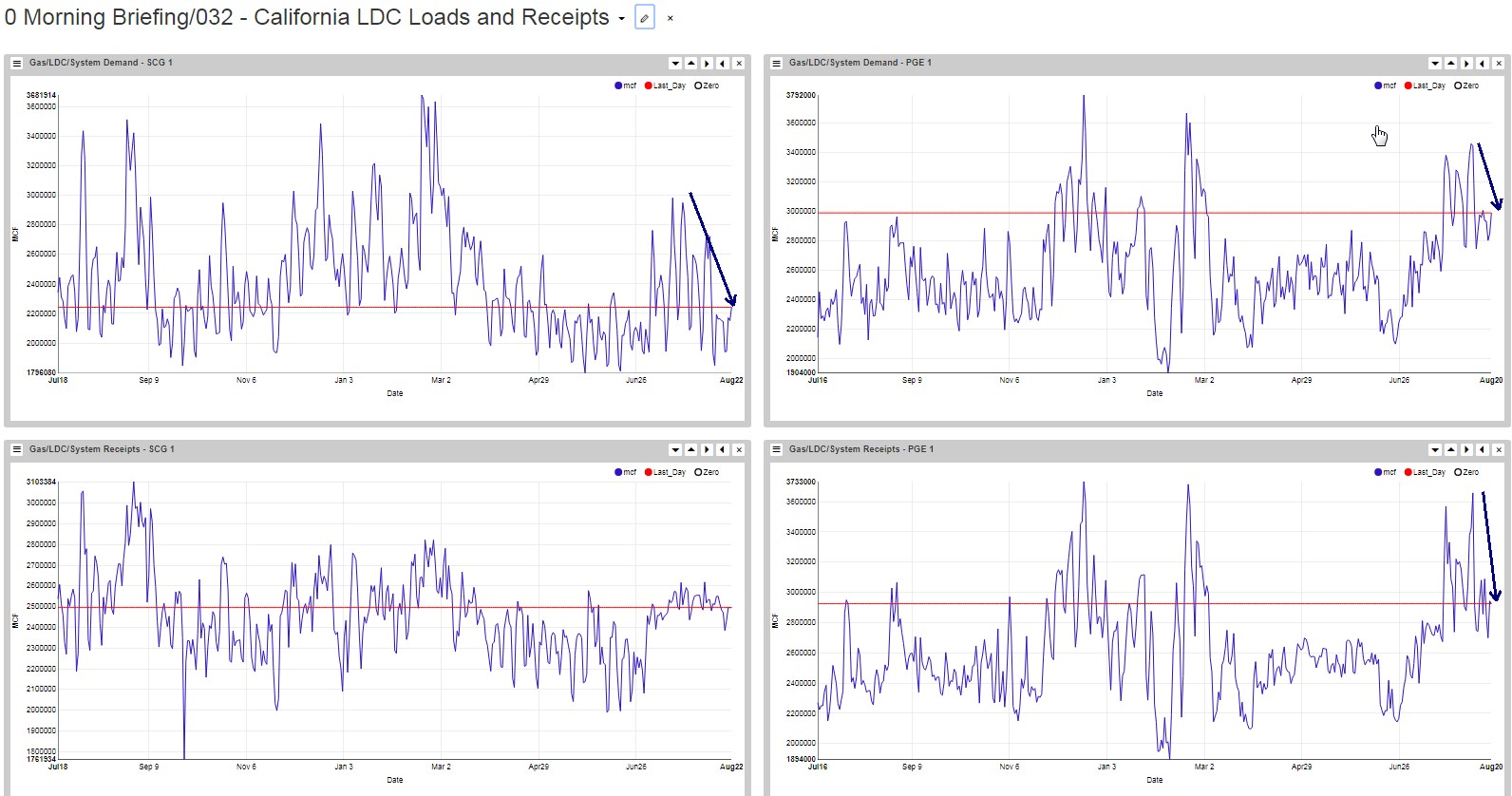 Demand across California has fallen, so has supply in the northern portion of the state.

We added a derived Total for Jackson Prairie, not sure its right and not sure anyone but Puget Sound Energy can tell if its wrong. Sadly, only the Cal LDCs post the storage totals, JP, Clay Basin, etc. don’t. 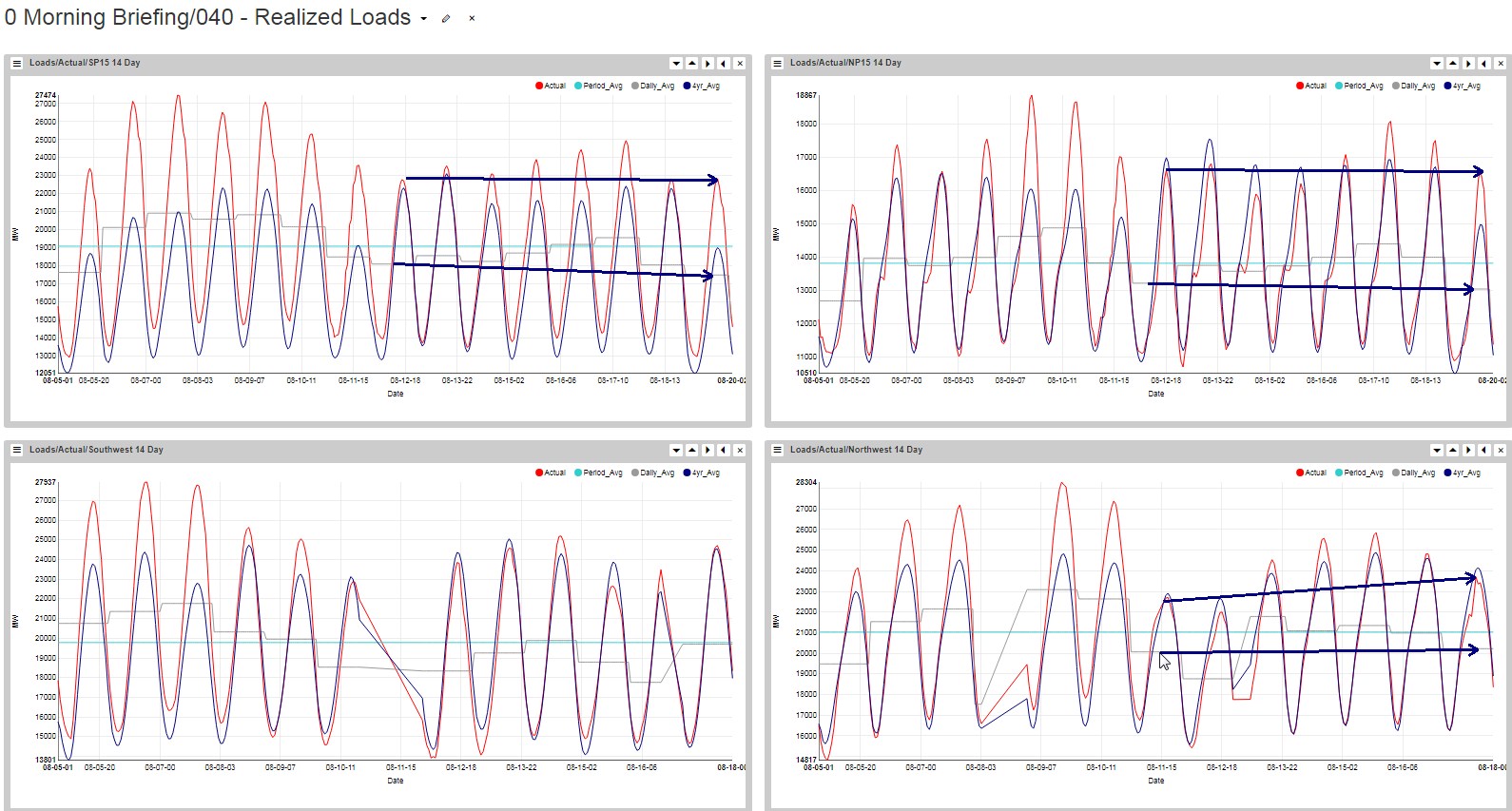 ISO loads are sideways to off just a bit while the Northwest loads were slightly up week-on-week. 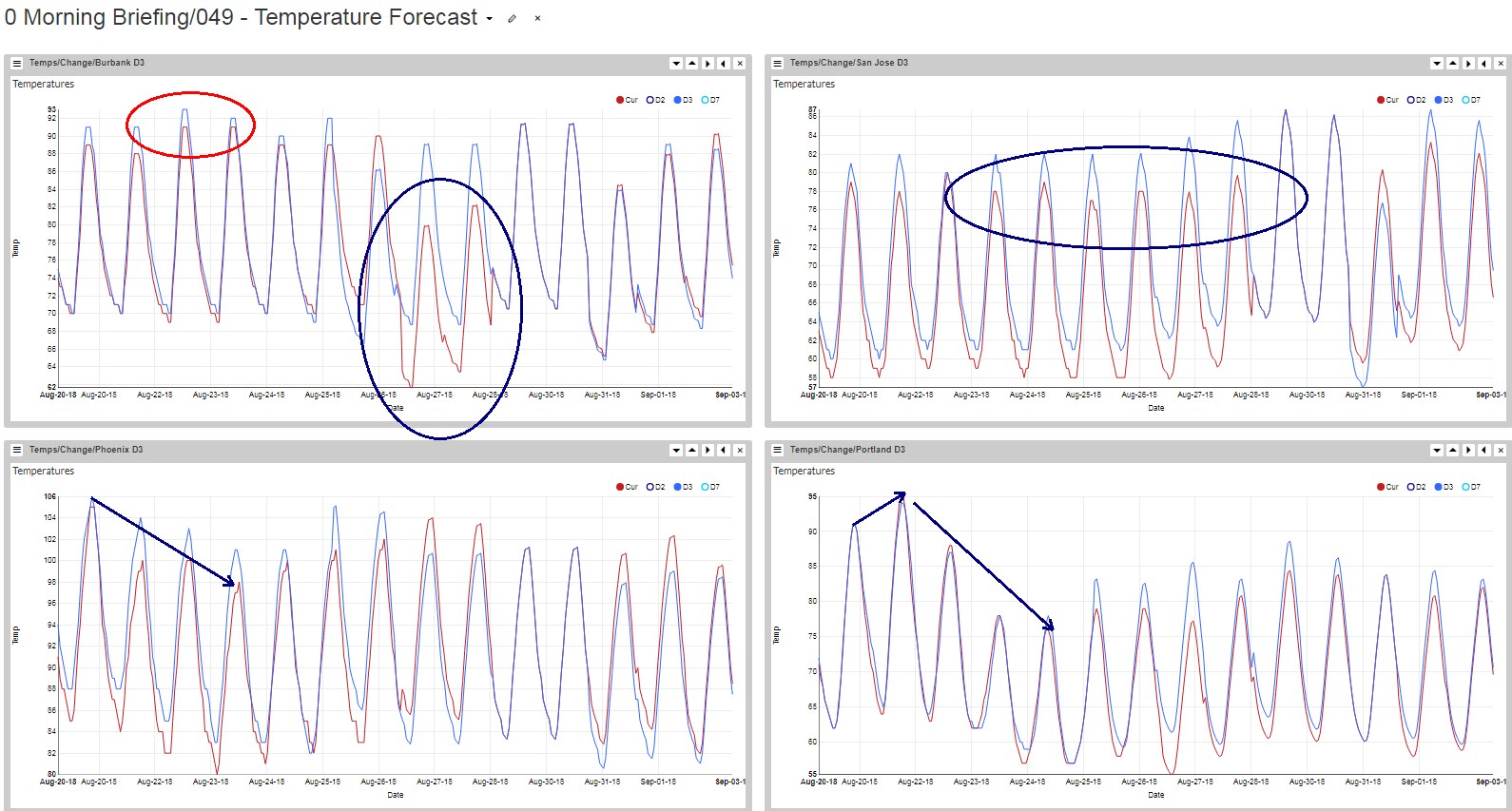 Those ISO loads will rally, at least at SP, off of warming weather in LA. San Jose doesn’t warm, it gets cooler, and the forecast trend keeps dropping; today’s is about three degrees cooler for all dates versus Friday’s. Temperatures in Portland are poised to plummet, same at Phoenix. It’s bearish out there, boys and girls. 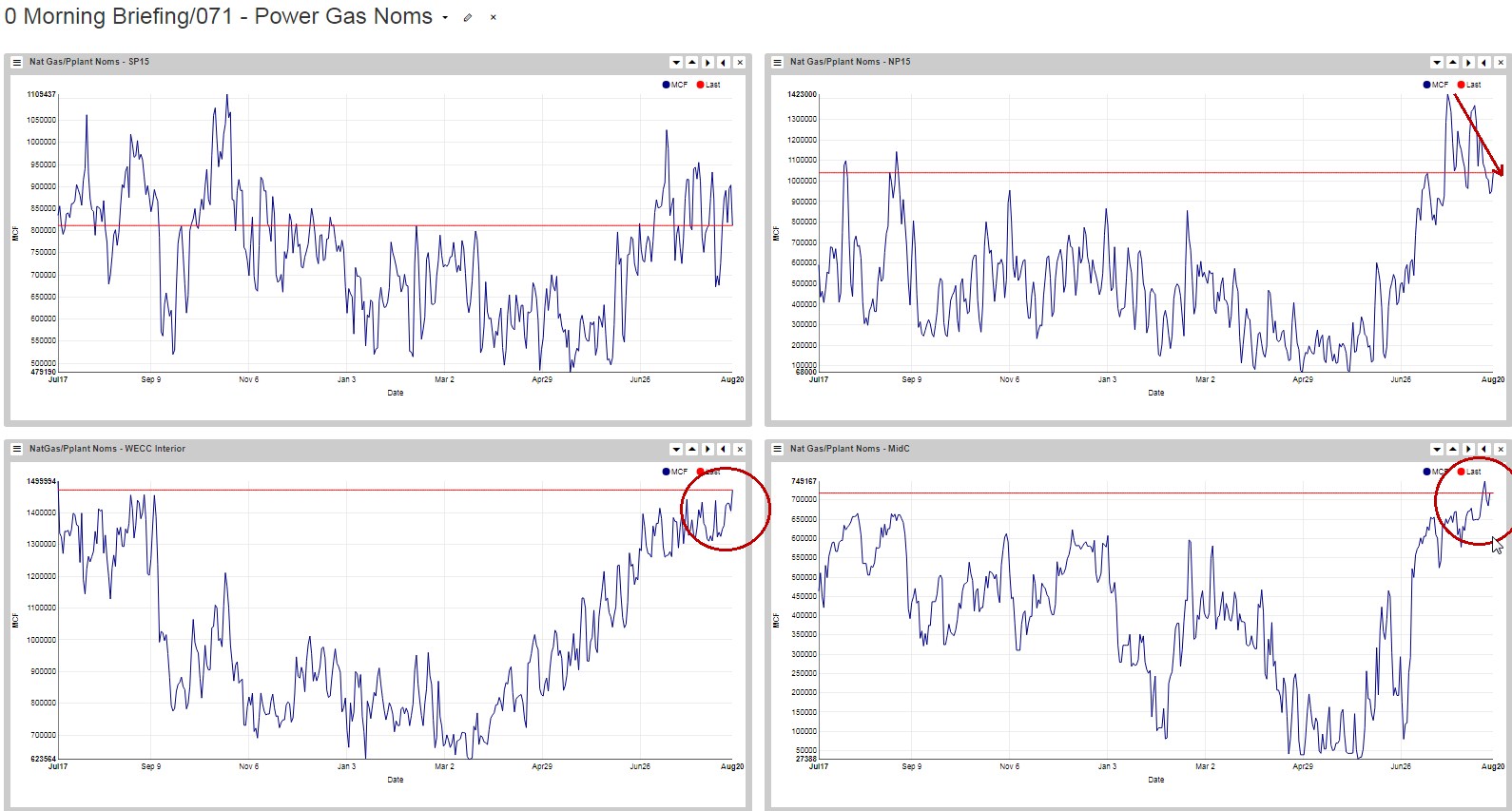 It may be bearish later in the week, but the system is still scraping the bottom of the barrel capacity-wise as evidenced by the still strong gas nominations for power plants. Where is Basis going once those noms fall off? 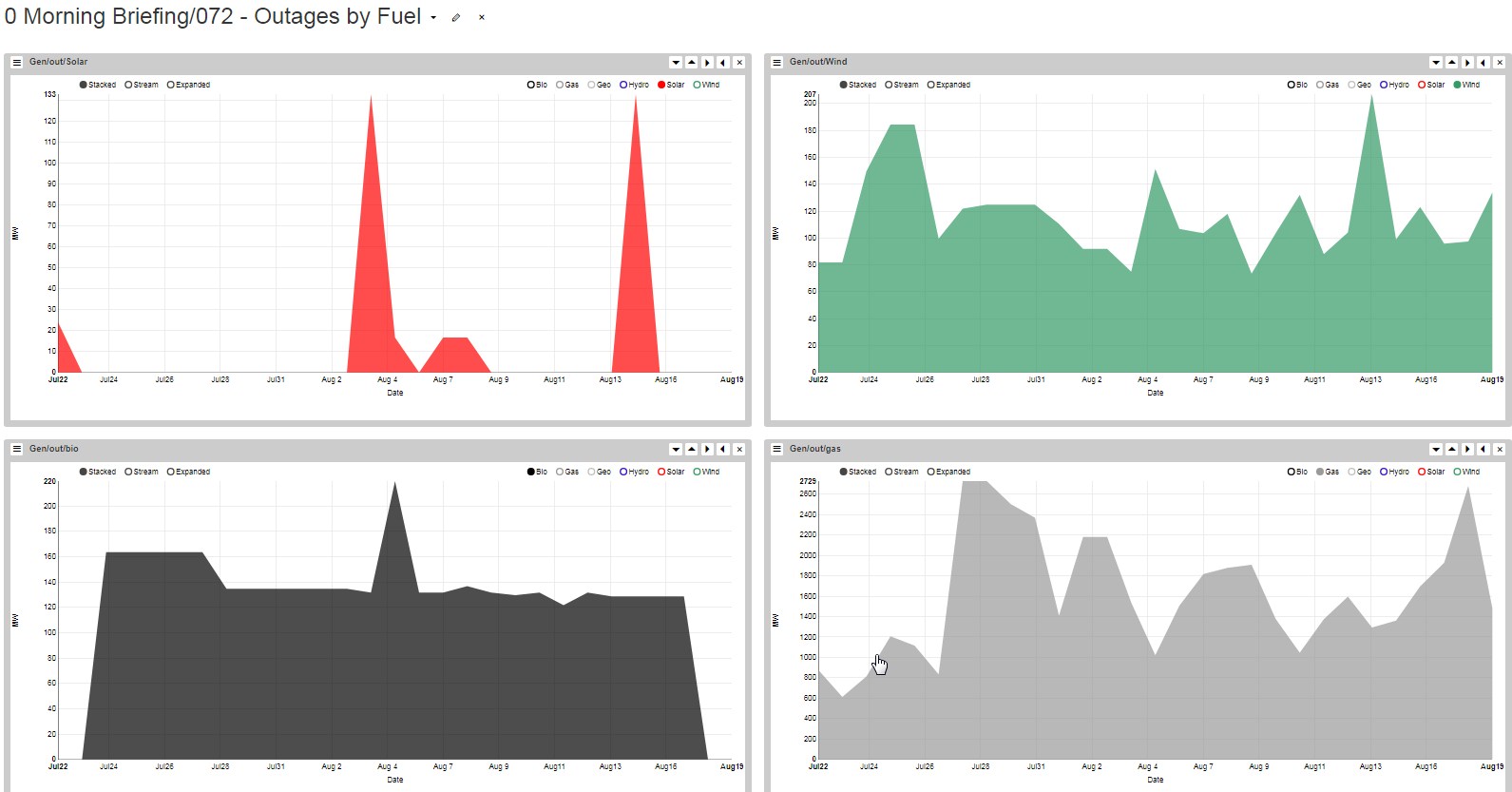 Here is a new dashboard, ISO outages by fuel type. We’ve been posting mainly gas outages, but that may be a mistake, especially in SP15. Since the Socal gas price has been so high, the hub has leaned on the adjoining hubs to serve its load, leaving many of its units not running for economics. All of which means non-gas outages are more relevant in SP than gas, hence the new dashboard.

But, for consistency’s sake, here are the gas units. 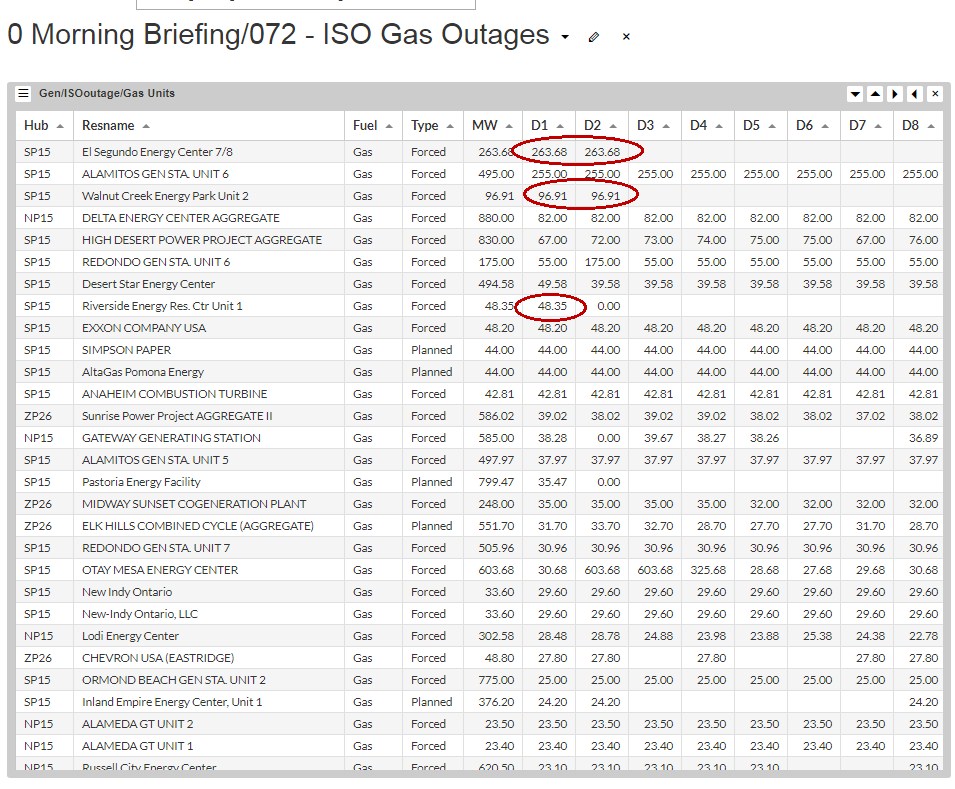 Renewables, both solar and wind, have rallied from a week ago (in the ISO) but the Northwest remains windless, mostly. 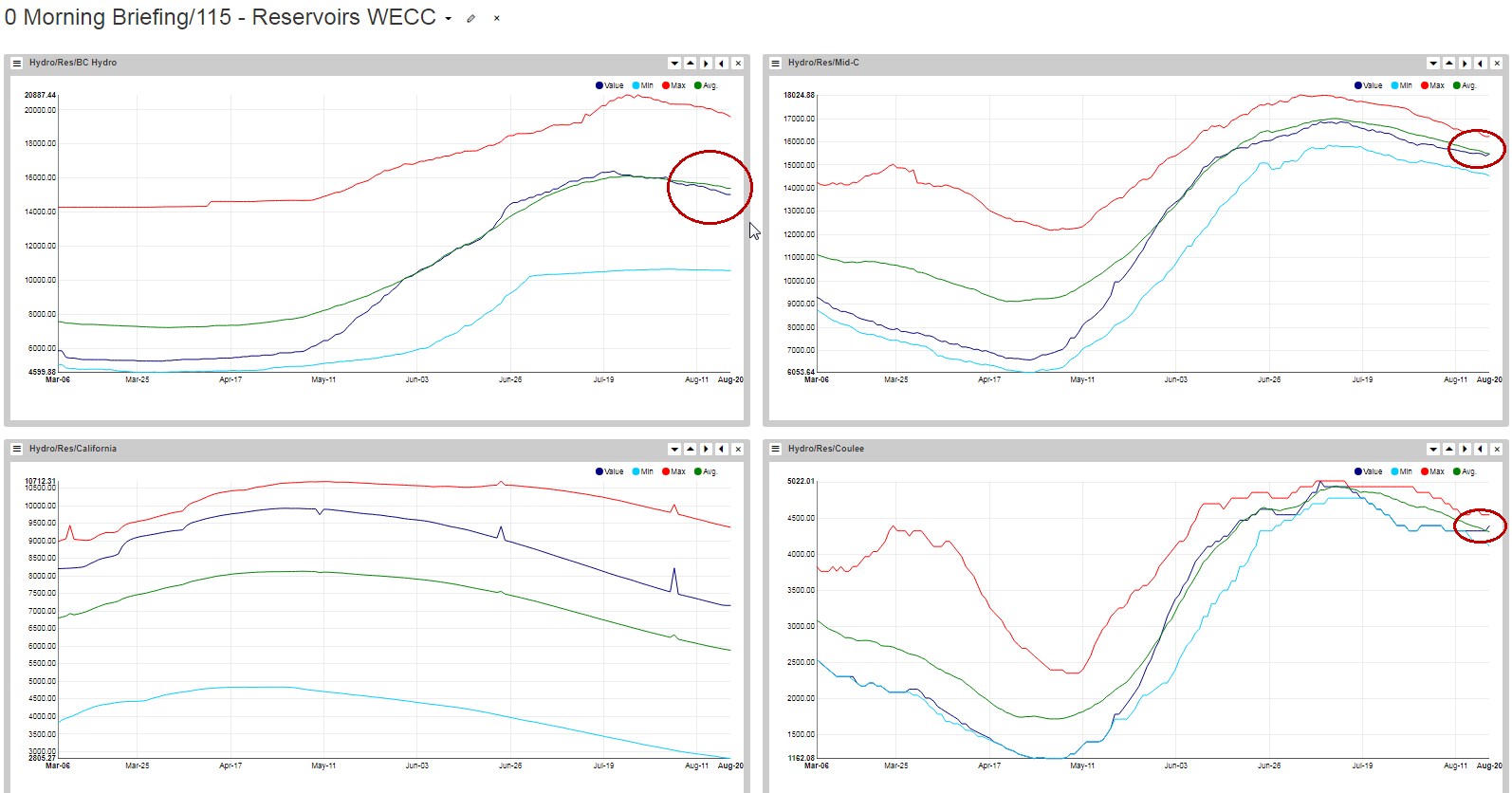 BPA got its reservoirs back to normal; for the last few weeks, they’ve been slightly below. To do that, it looks like they had to draft Treaty water from Canada. 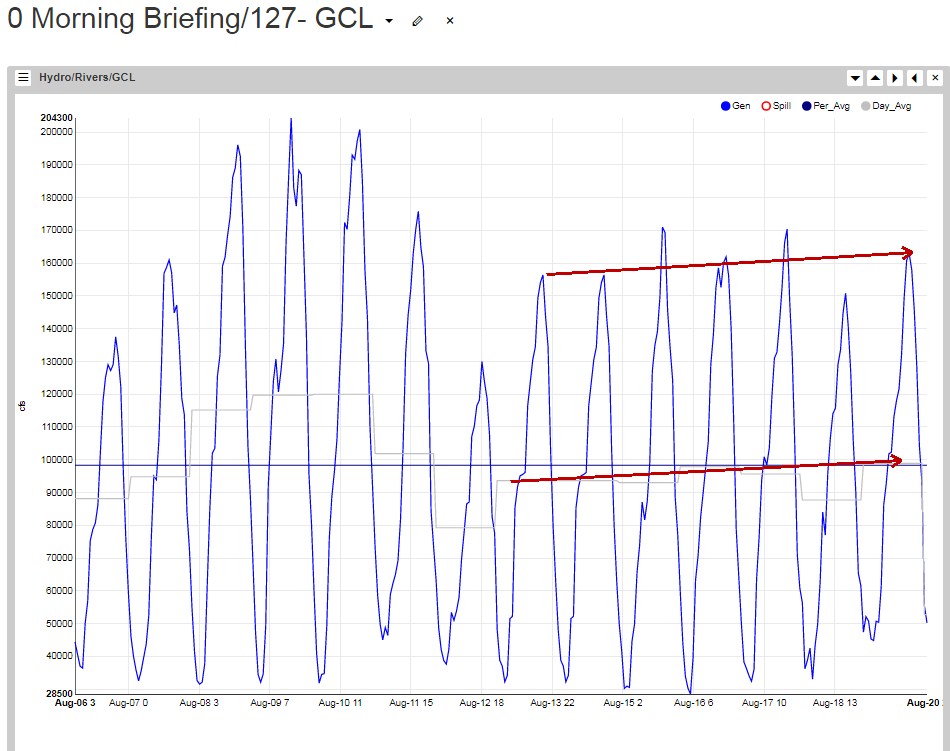 Hard to believe GCL flows were up, week-on-week, but they were, just slightly.

Arrow drafts are up sharply while Mica discharge is below average.

Check out the miserly flows at Bonneville dam, and flows at McNary and John Day fell off a cliff. Which reminds me, it is August 20 today, and there are only 11 days left of Spill! Usually, when spill ends BPA cuts discharge but doubt we see them cut anything this year. Never has water been so precious as it was the last four weeks, and to see it spilled all for the salmon must have brought a tear to BPA’s eye. 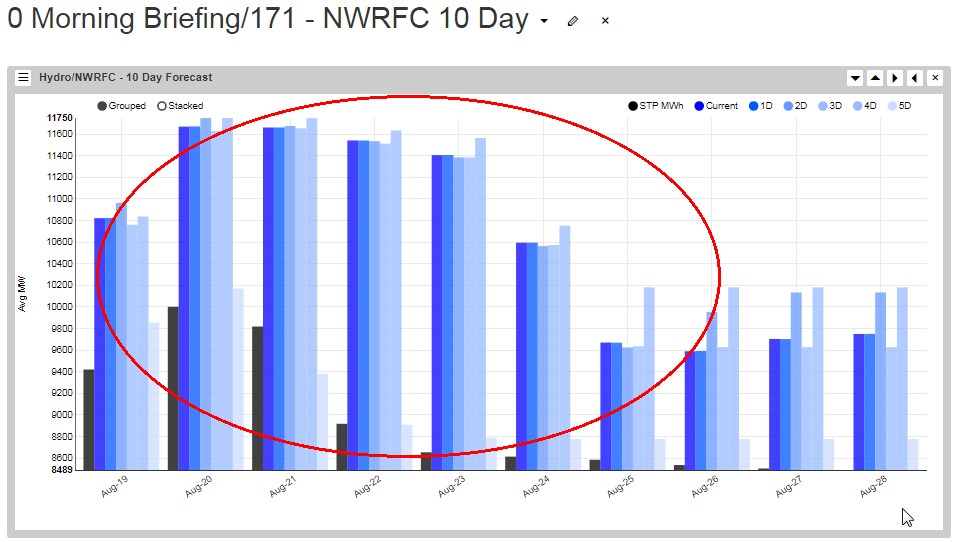 This is weird, the NWRFC’s 10 Day versus STP. Our dear friends in Portland have mysteriously found two gigs of Northwest water and jammed it into this week’s forecast.  Which is interesting, loads are poised to collapse. Maybe they saw that 0.0001″ of rain coming?

Here’s another nugget to chew on – November. Our Portland Pals have also boldly placed their heads on the guillotine on this one, too. They are predicting the tightest November in history, and not by a little, by about 1000 aMW. You can see from the chart on the right the haircuts all took place over the last four weeks. Well, don’t think that will hold, they’ll be putting that water back.  Hopefully, you Slicers aren’t out there buying Novy; its gonna get cheaper. 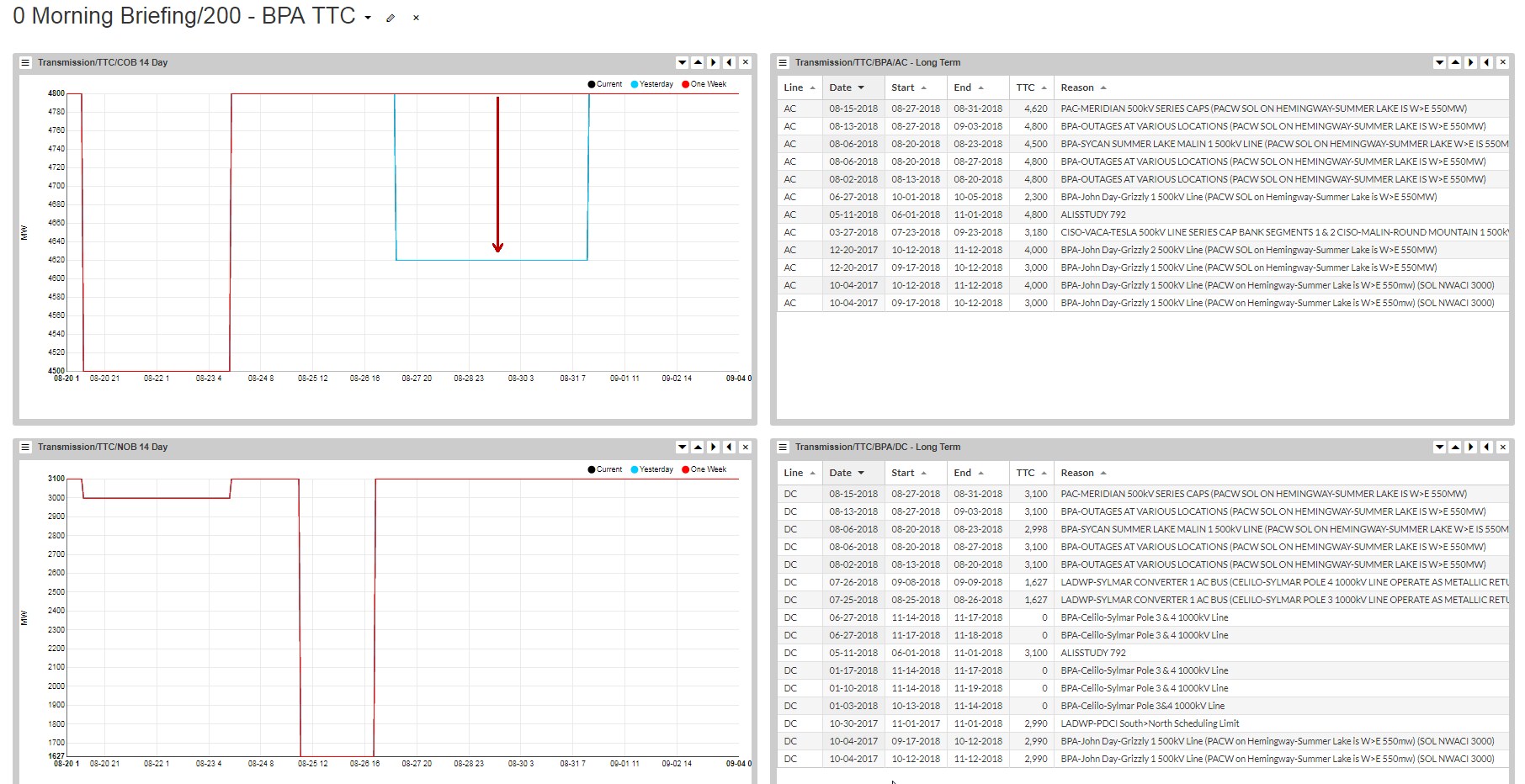 No BPA TTC news, aside from a small derate on the AC.

The Northern Intertie is exporting less energy to the MidC; the AC remains under-utilized; ZP is back to sending energy to NP, not much, but more than a week ago; Palo exports to SP collapsed.

Summer is winding down, but it’s not over. The 6-14 day outlooks are bearish, and Climo grows more bearish by the day. Still, the system is a wounded animal. Socal Gas is remains broken while the Northwest has run out of the water. All it will take is some new heat to send prices back to the stratosphere. That said, we don’t see any signs of that new heat.