Just when it looked like the WECC might cool down, perhaps even see prices come off, another blast of heat appears. 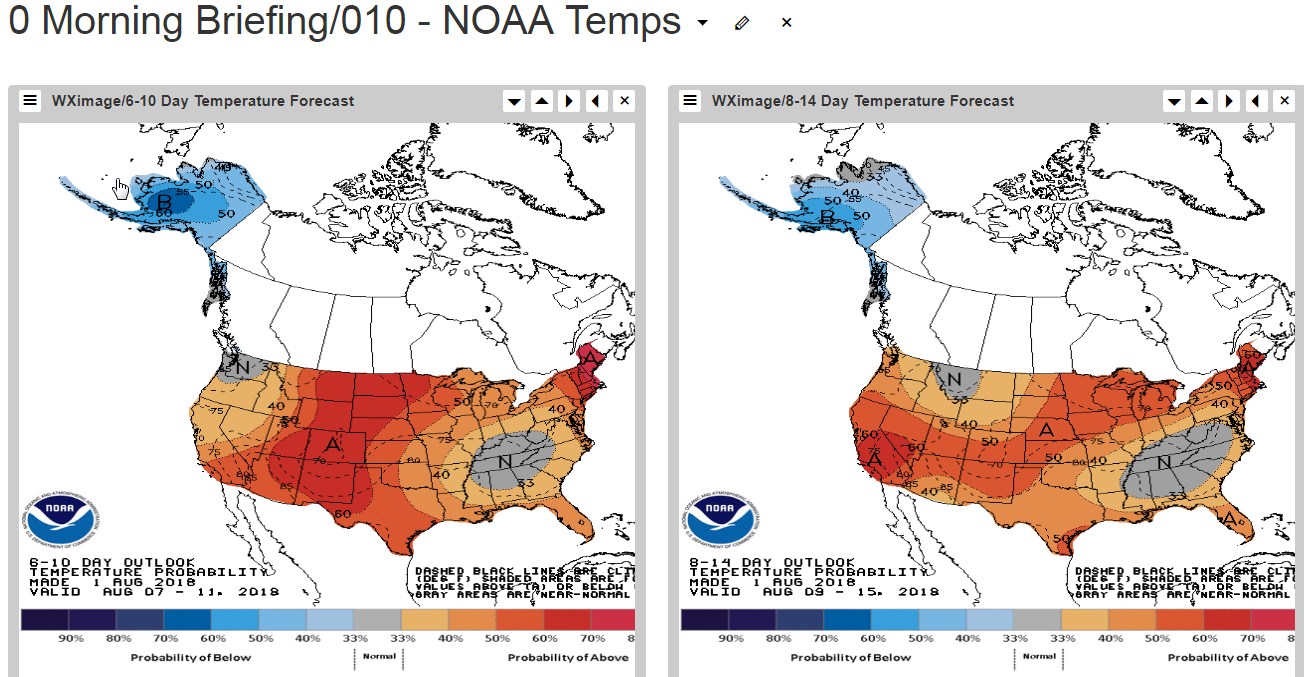 Not a scorcher but the most significant anomaly is in the LA Basin, never a good place for heat when the spot gas price is dancing in the teens. The forecast gets even more bullish when you contrast today with Tuesday’s 6-10 day: 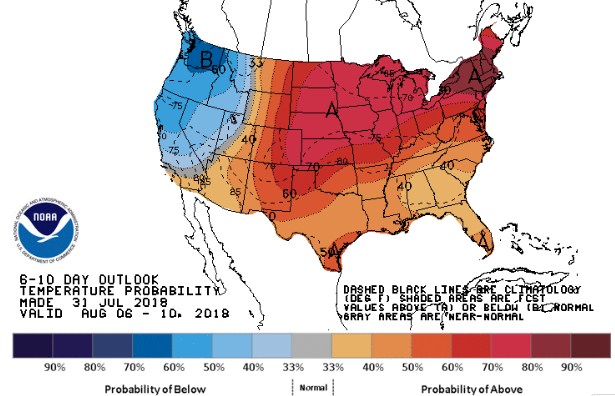 That day, Tuesday, was extremely bearish; not so much in today’s forecast. In fact, shorts need to cover, the Energy Crisis of 2018 is not over.

These are just crazy levels, but not when you compare to where cash is clearing; in that analysis, the term market seems ‘reasonably’ priced, especially in light of potentially more damaging heat. After all, these term prices all include an element of Socal Citygate in them; even if the hub burns a different spot. We called this “contagion” and wrote about it a few days ago. The price setting hub’s price becomes a baseline for all other hubs, even if their fundamentals are disconnected.

For example, why would the MidC clear 30-40k heat rates? Sure, things are tight, but there are no 30-40k units. The reason, contagion to Socal Citygate. So, should the Citygate blowup (not that it ever came down) then so shall all other hubs trade at premiums.

Even the light load is running high heat rates at NOB and COB, but check out the rest of the hubs (not SP) heat rates for on peak. Fundamentally, today is not that bullish, but the lingering impact of last week’s heat is keeping the Citygate prices high. 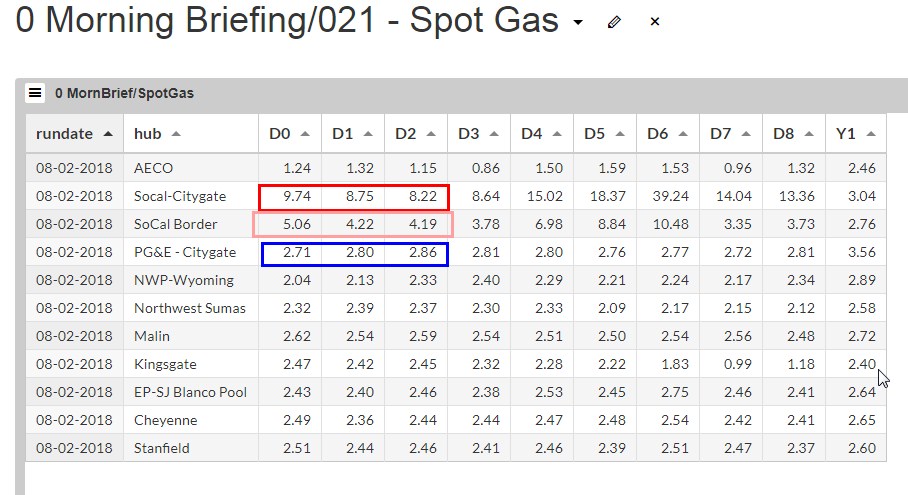 $9.74 at SCG, but check out Border’s price of $5.06, all the while PG&E Citygate can’t break into a three handle. In theory, all non-SP hubs should be trading at 15k * their respective hub’s spot gas price, but they aren’t – Contagion. Now, with more LA heat en route, the fear of new prices in double digits will keep the pressure on forward prices, they probably build as long as the heat stays. 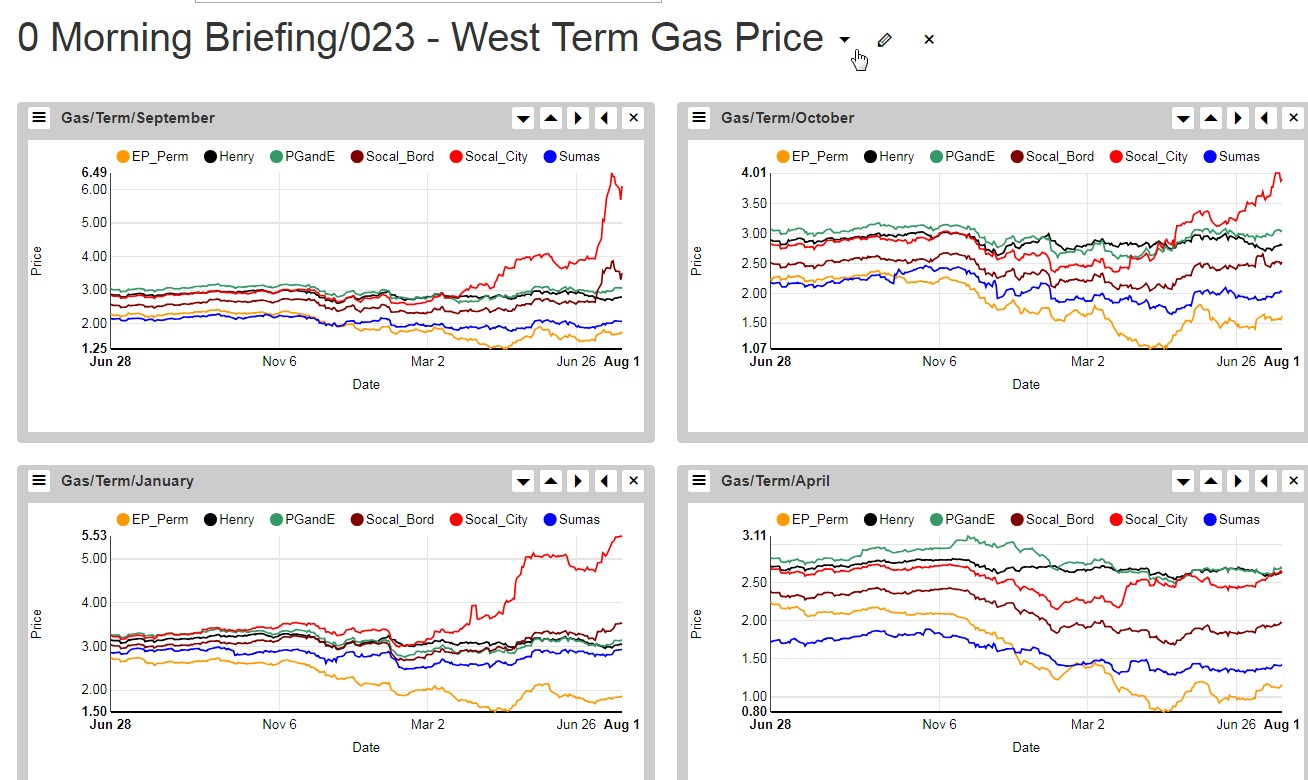 Meanwhile, Citygate term markets keep rallying which is putting the balance of 2018 on the bid. 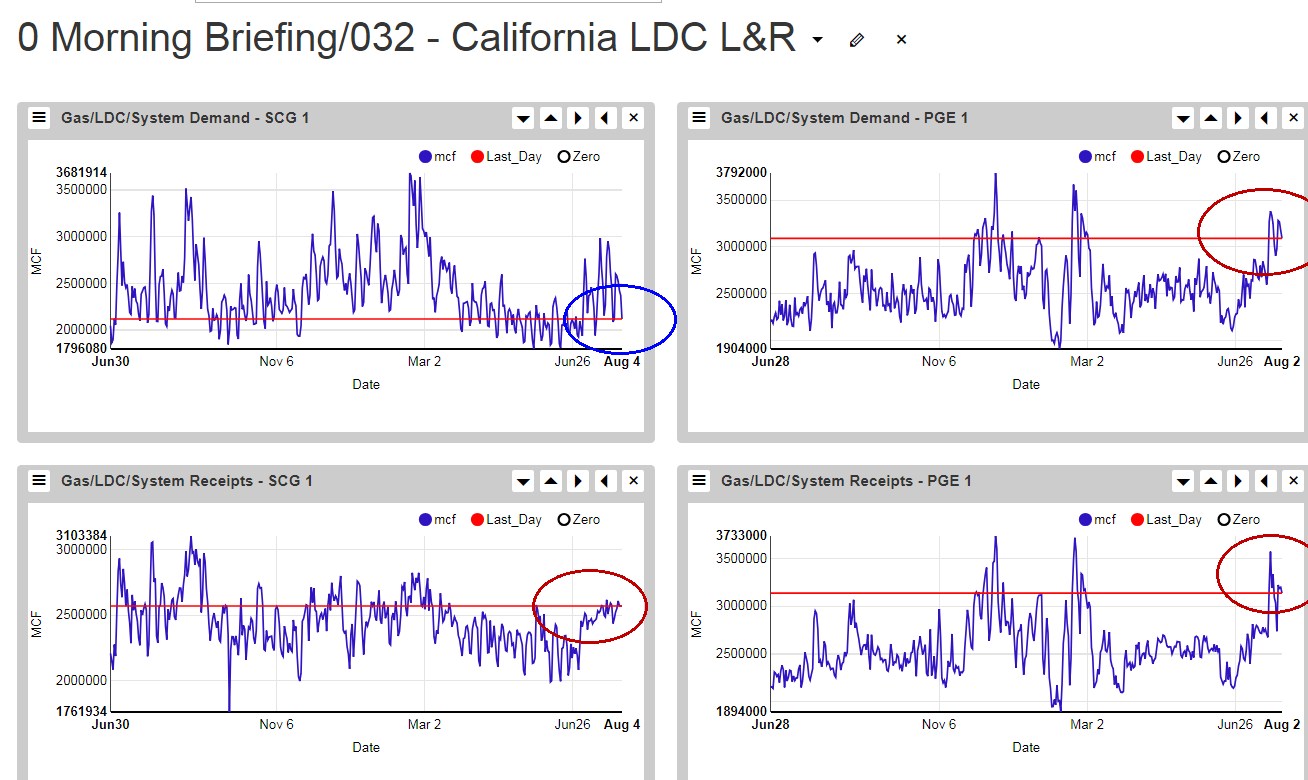 The strangest thing is that current Citygate gas fundamentals are not bullish, not on a 2.2 bcf sendout day. Instead, the bullishness is at PG&E where loads remain at near-record summer highs. LA has very low demand and now is back to normal supply.

Check out PG&E’s storage draws over the last month, a similar story at Jackson Prarie. As the heat lingers, the gas isn’t going into the ground; it’s being burned in the turbines all of which is bullish for next winter. 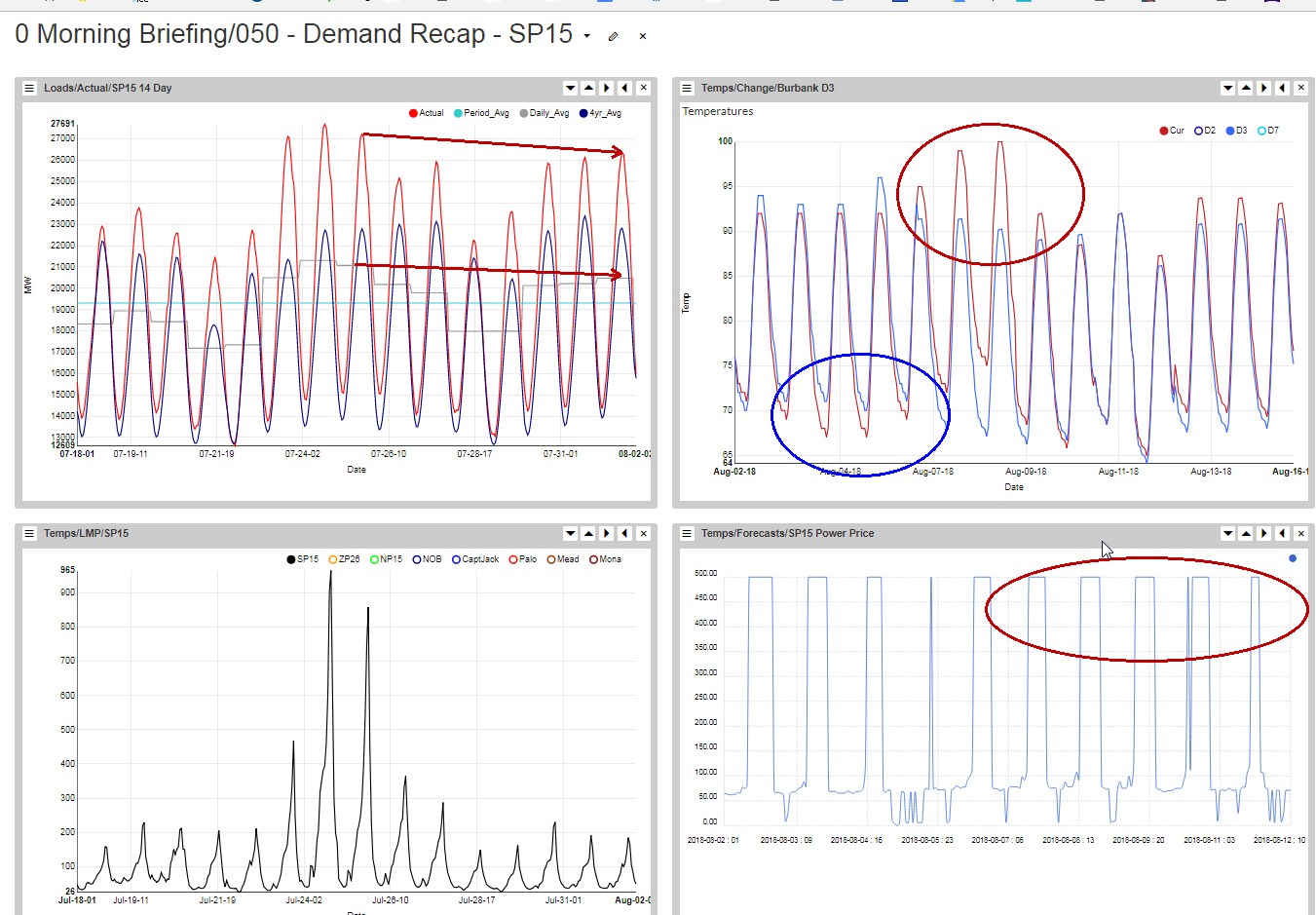 SP’s loads are off, week-on-week, but of course, they would be; last week was the heat wave. Remarkably, they are not off very much and remain well-above the four-year average. But that is in the past, how about the future. Checkout out those Aug 8-9 temperatures – back to triple digits – and note the change in the forecast vs. three days ago. The plot in the lower right corner is Ansergy’s hourly price forecast for SP, and every time the lines hit $500 our model has run out of energy. Happens more than it doesn’t. 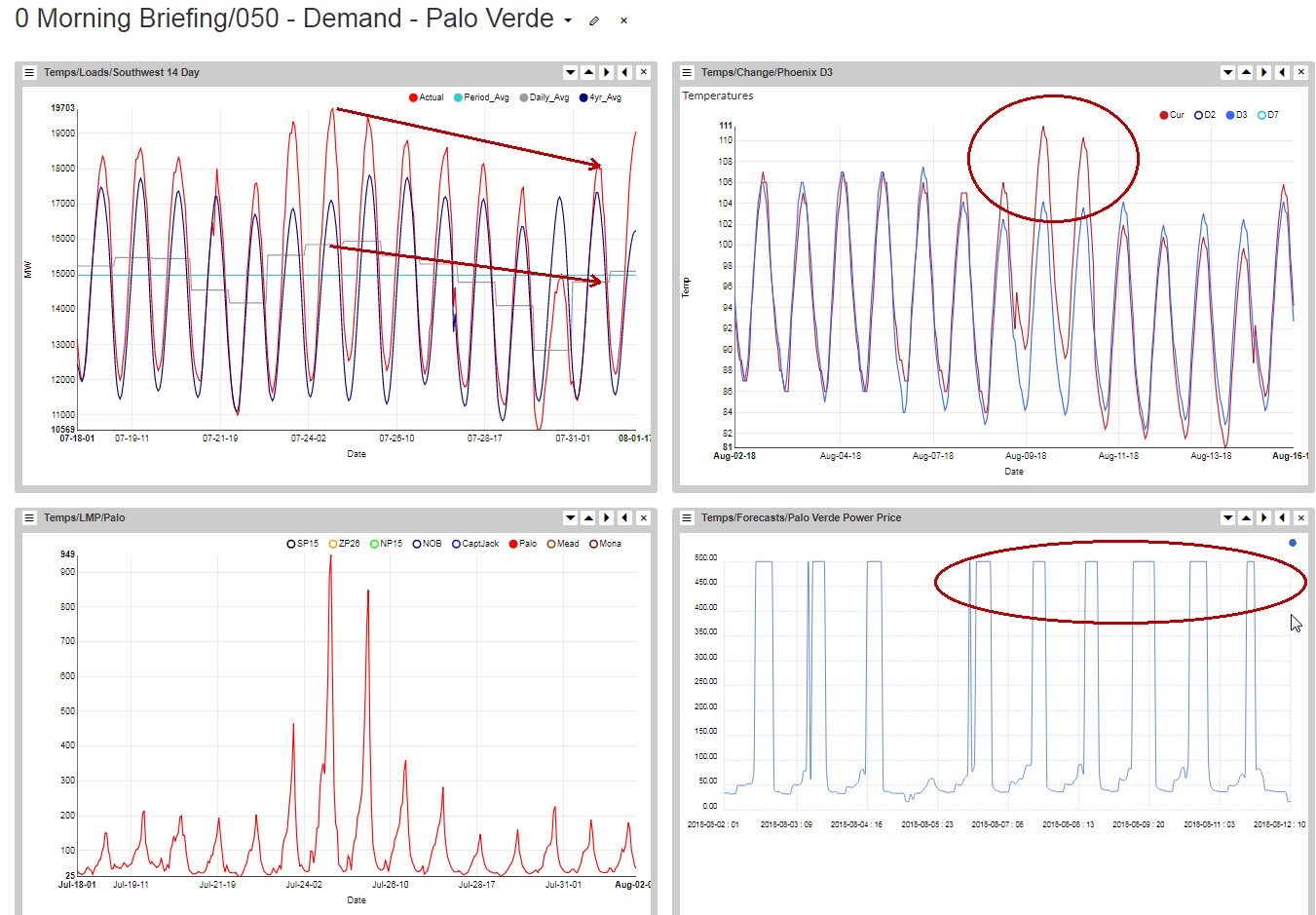 Palo’s loads are off much sharper than SP’s, but the desert has the same mini-heatwave on Aug 8-9. One other factor that we found noteworthy – Monsoons. 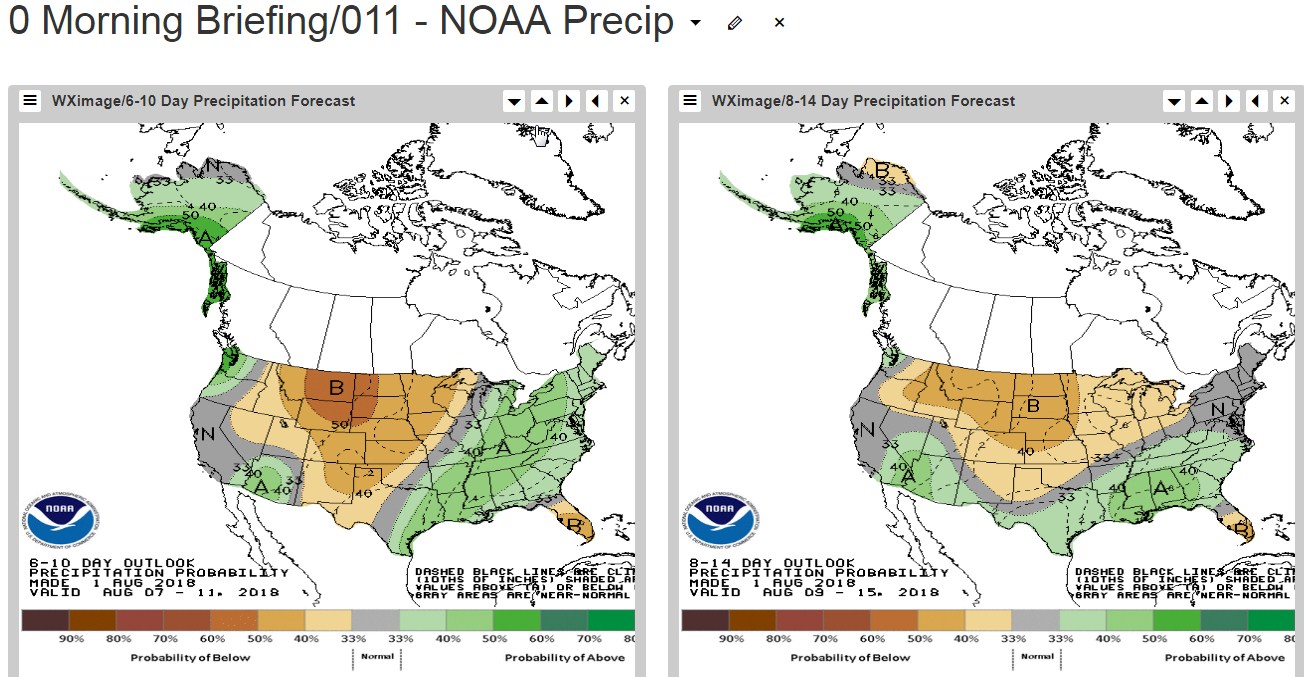 Palo looks to be slammed with a couple of load-killing storms sometime over the next two weeks. 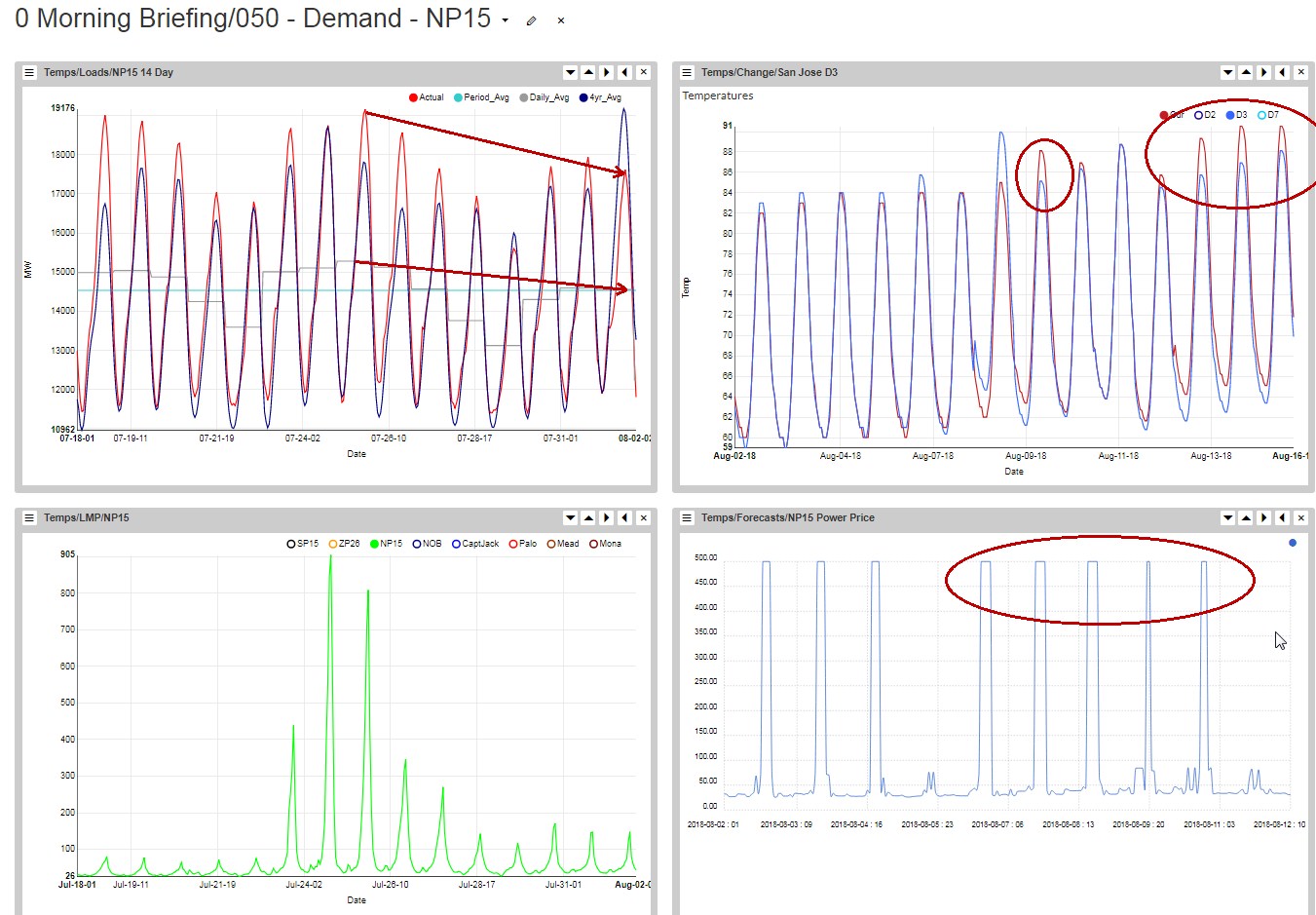 NP’s loads are off sharply from last week; forward-looking temperatures are not hot like the south, but there is a teaser out in days 11-14 day, don’t bank on it, though. 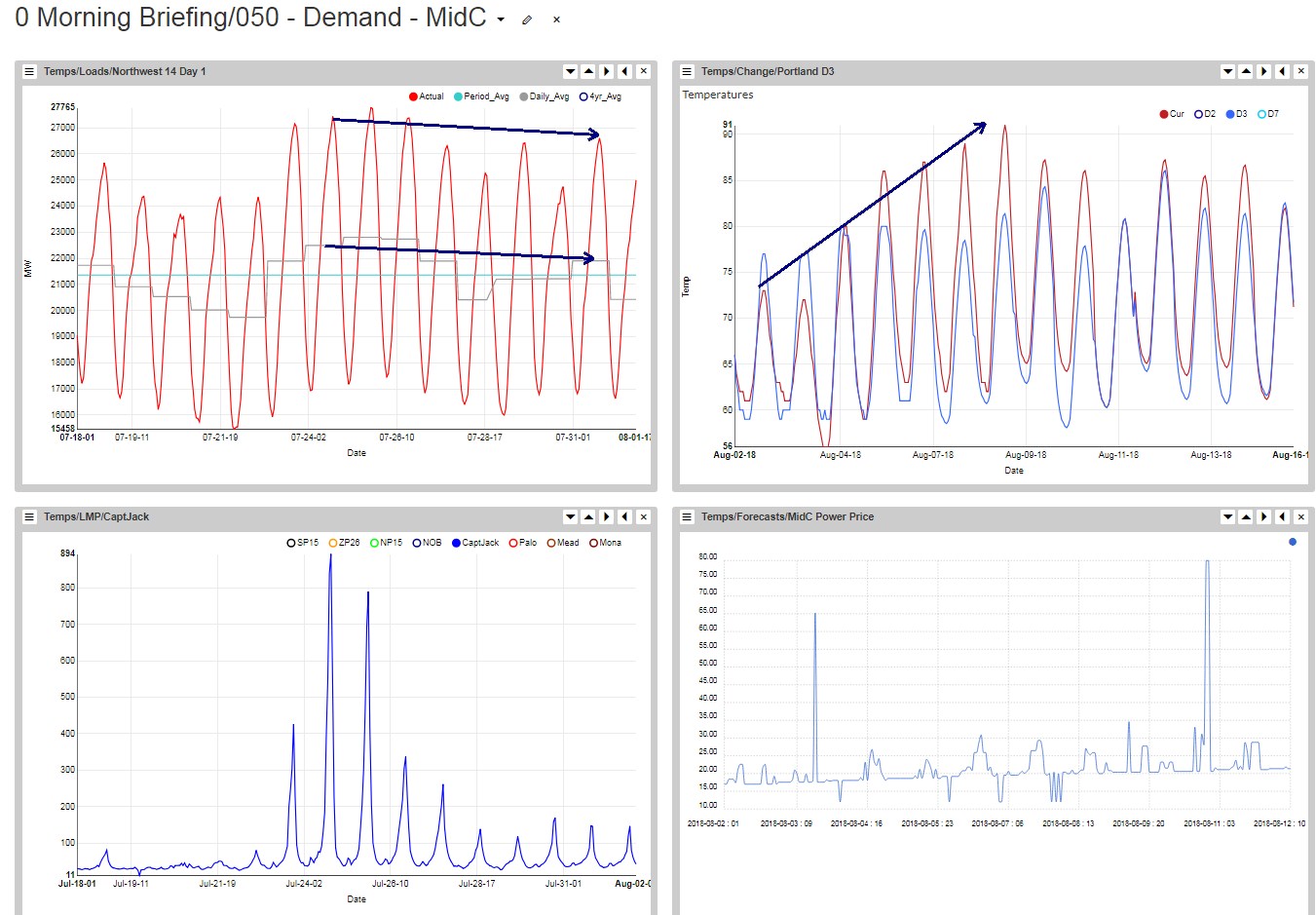 Don’t put that swamp cooler in the attic just yet; Portland is heading back to the 90s, so is Seattle. That isn’t so hot, but it’s hot enough given that BPA is running out of water (more on that in the hydro section). 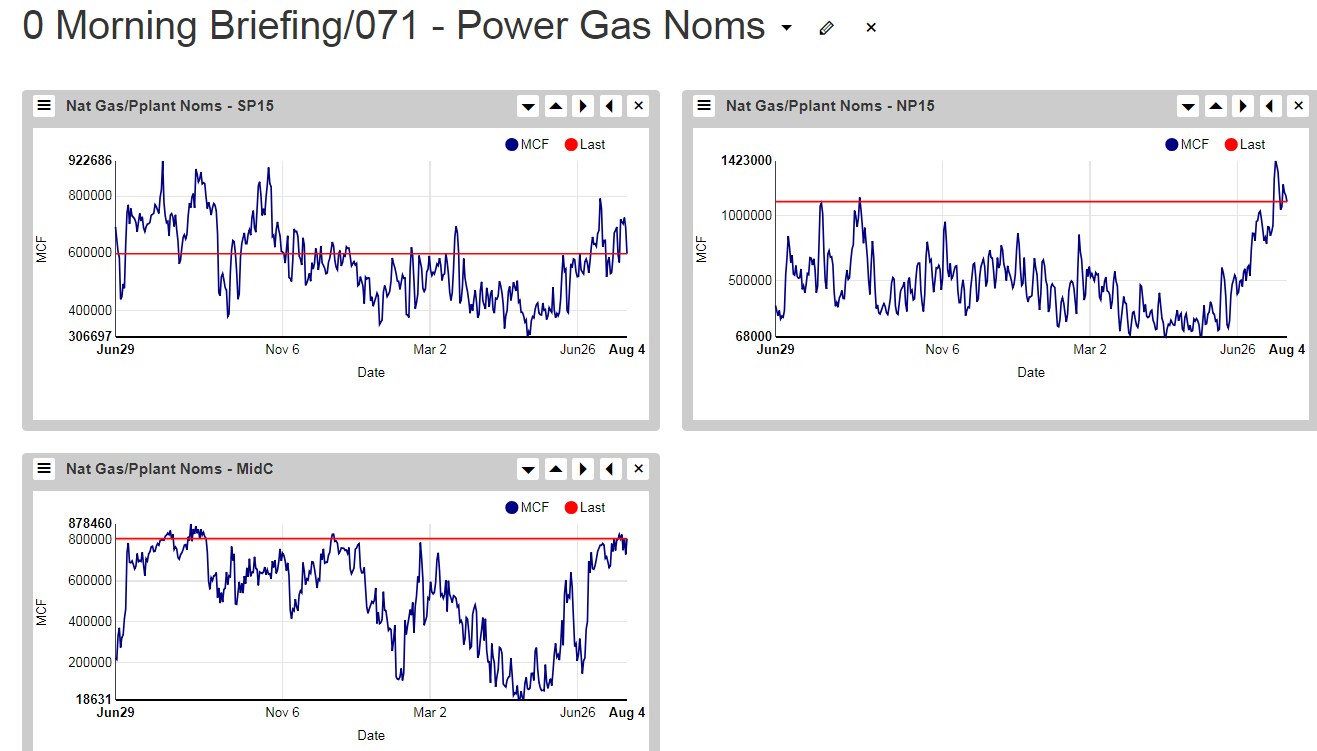 MidC and NP15 are burning near-record amounts of natty in the turbines; SP15 not so much, but who wants to burn $9 gas when you can import $2.70 gas? 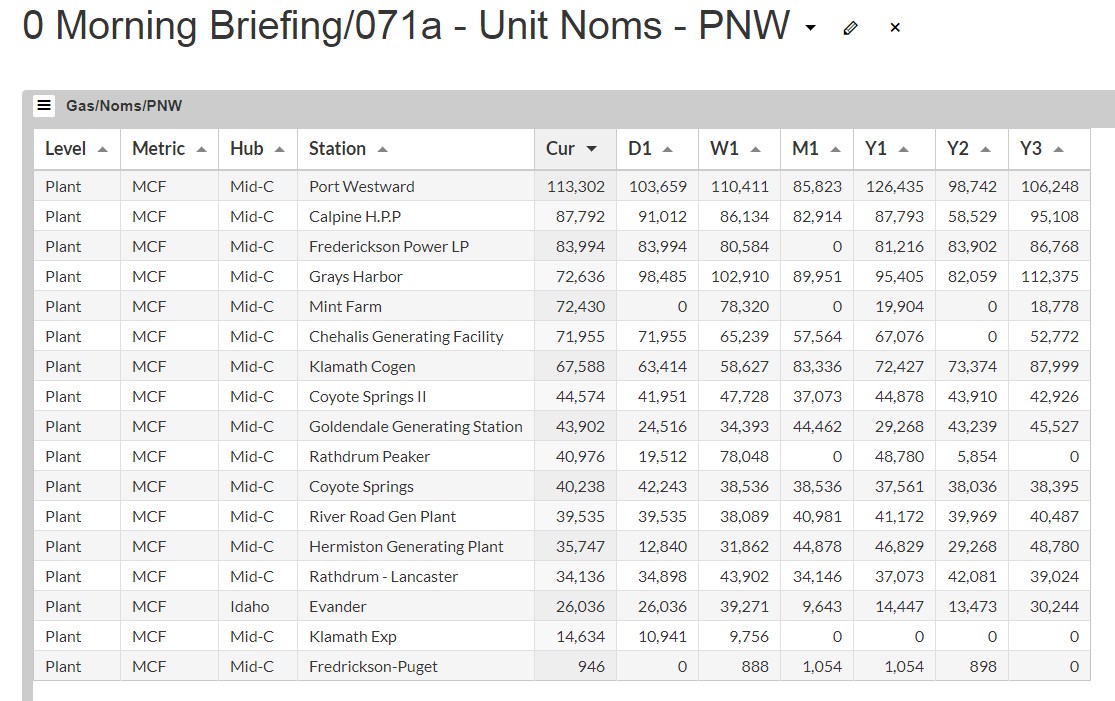 There isn’t much left to turn on at Mid-C; everything is running today. Maybe those Energy Crisis diesel plants have even been turned on, probably have.

Not only is the Northwest hot, but the dang wind also quit blowing – which blows if you’re BPA. I can just hear the right wingers saying “told you renewables suck, should’ve built more oil plants.”  ISO solar has taken small haircuts, about 10% over the last couple of days; perhaps from the California smoke? SP’s wind is also off, though NP remains at near capacity. 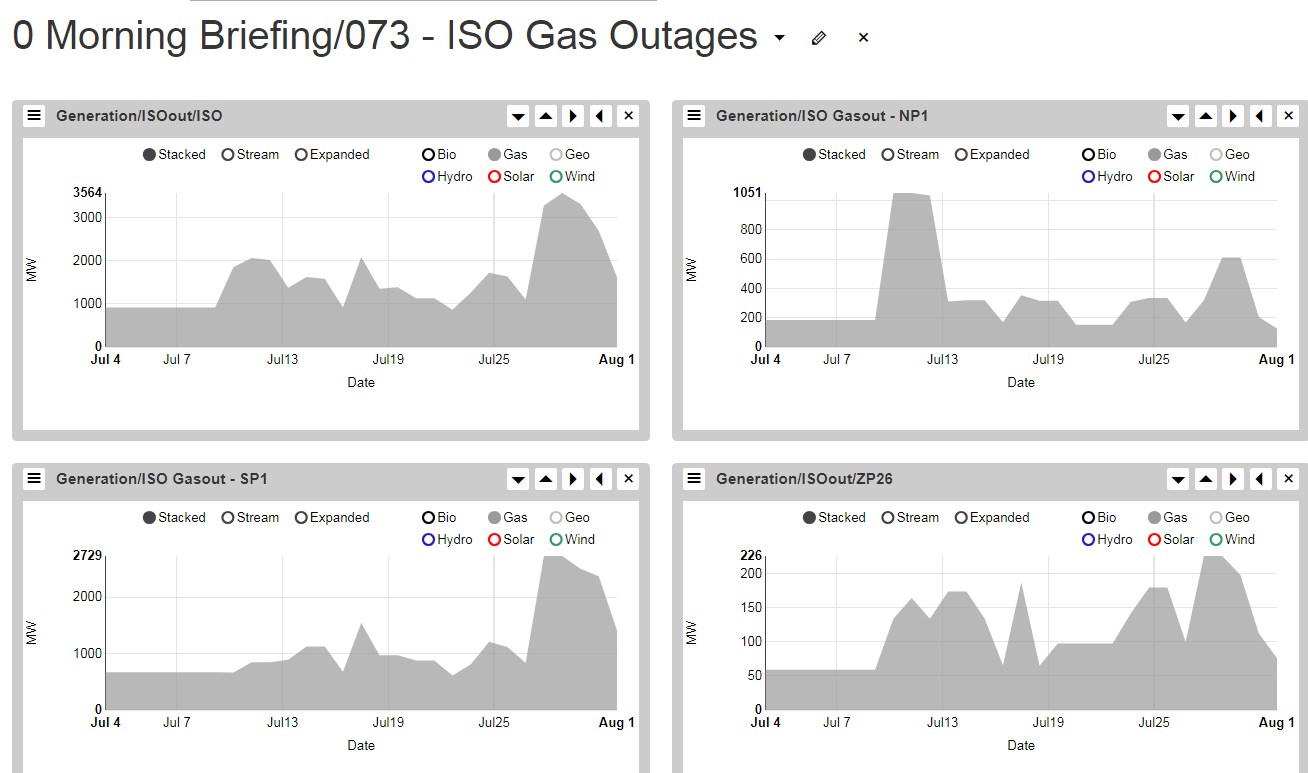 ISO gas outages surged, mainly at SP where they matter less than at NP. NP is running at near 100% capacity, SP barely 50-60% capacity, so an outage at the latter matters less than the former. Now, most of those outages have returned. 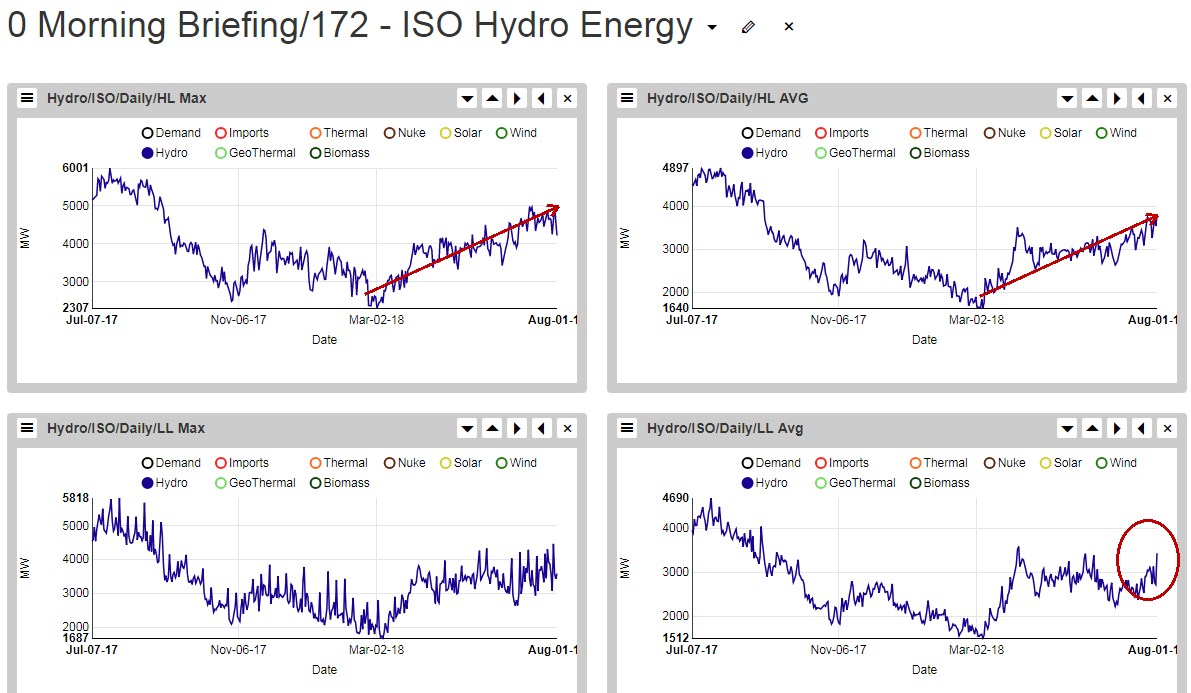 We’ve noted a consistent rally in ISO hydro energy; now we even see a surge in the off-peak production; all of which suggests how tight things are in CA.

None of that increase in production is coming from natural river flows; all of it is coming out of storage. California is now 2 MAF lower this year than last. While on the rant of storage, check out Coulee: 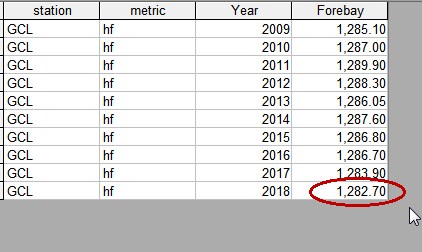 The table returns the forebay elevation for yesterday for the last ten years. Guess which year is the lowest as of August 1. Drumroll …. 2018, all of which underscores how tight things are in the Northwest. With more heat on the way, BPA has no choice but to continue to draft and just digs a deeper hole to be filled in Sep-Oct-Nov. They better hope the Northwest starts its rainy season early; a dry Indian Summer would pose serious supply problems for everyone in the Northwest. 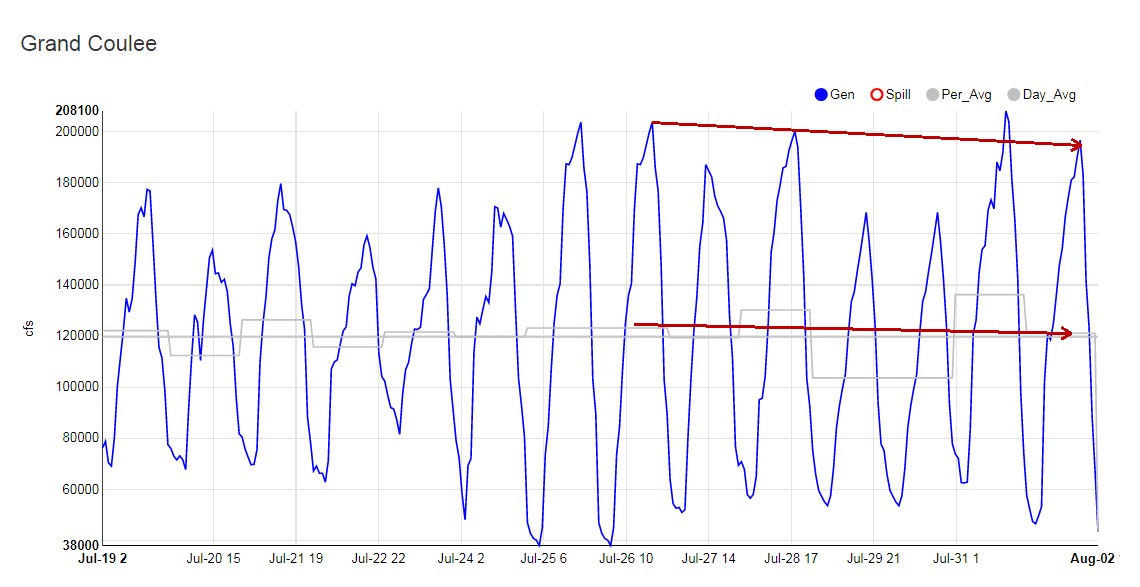 BPA cannot cut generation, it needs the energy, as evidenced by the hourly discharge through the turbines at GCL. 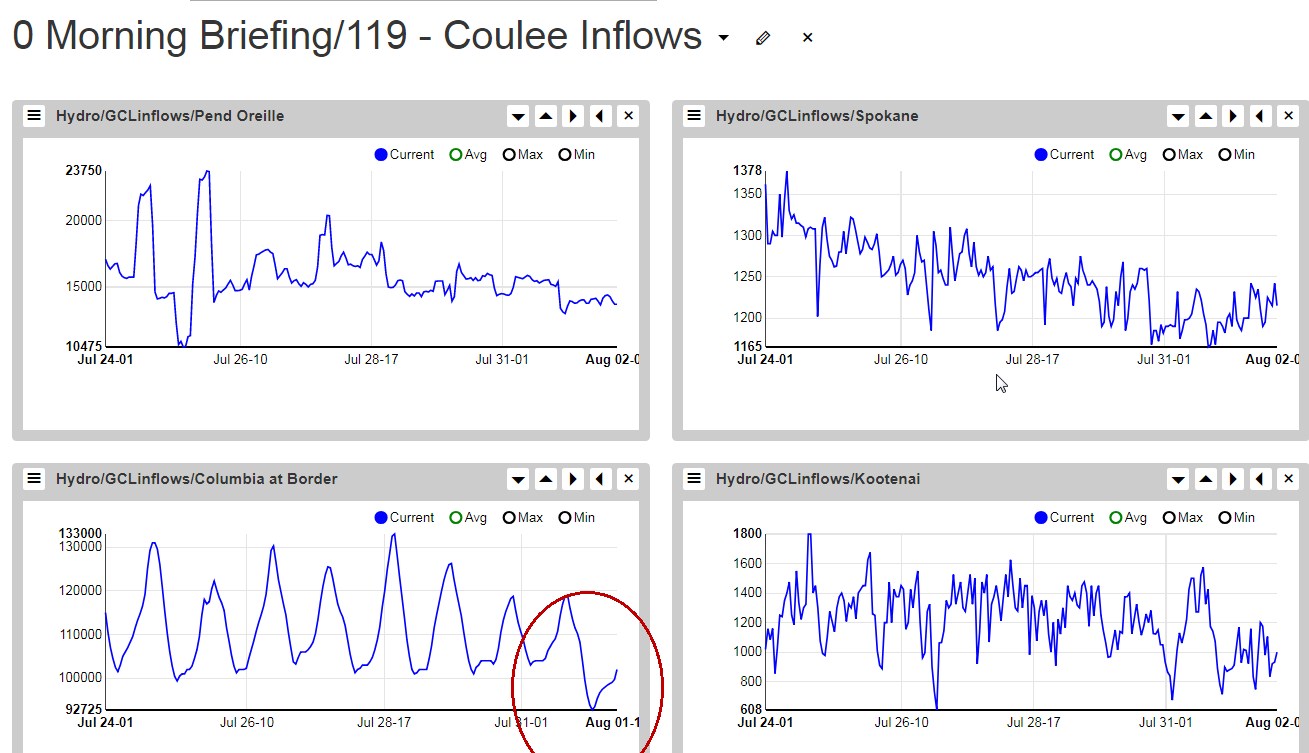 Check out the recent cuts on the Columbia River at the International border; unless Arrow gets drafted even harder than it already is, those levels will probably continue to fall further.

And BC is not in much better shape. Mica is setting five-year lows; only the Peace is seeing normal to above normal drafts. It is interesting that despite weakness on the Columbia, BC is still exporting to the MidC, all thanks to the Peace. 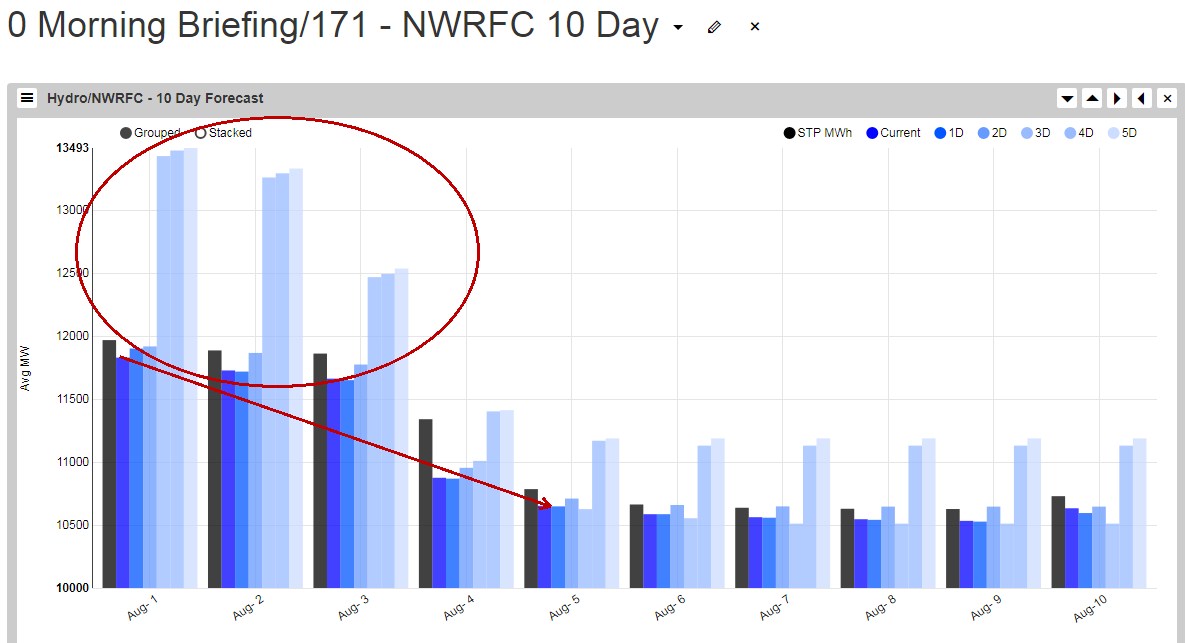 The River Forecast Center has jumped on the “Long Aint Wrong” bandwagon by cutting its ten-day forecast around 1500 aMW from last week’s #s. Probably a reflection of the deep drafts at Coulee. Also, take note of the cut from today to next week – about 1000 aMW equivalents.

The NOB filled up over the last couple of days, but not the COB. Path 15 remains a dead line, nothing going north or south, while Path 26 is nearly full every hour, all southbound into the LA abyss. 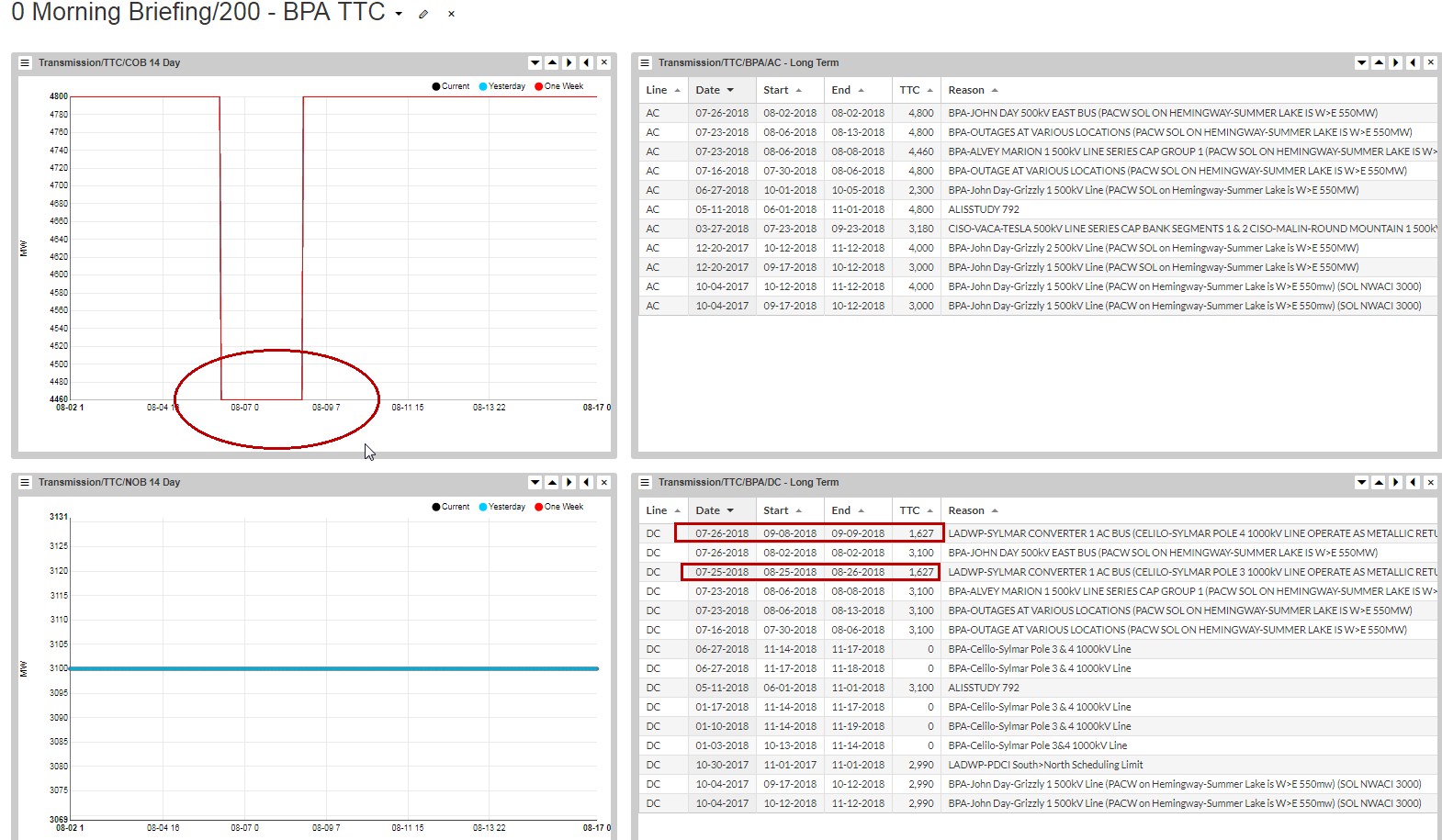 BPA posted some outages on the DC in late August and early Septemeber.

This new heat makes us fear shorts; we liked them when there were cold anomalies forecasted, these warm anomalies melted away that sentiment. At this stage, we’d either be flat or long everywhere and anywhere at any time.