Well, it’s here, the Heat Wave of Summer 2018. Check out the DA’s posted yesterday for today:

Every node traded triple digits, even COB and NOB posted big numbers which drove other-worldly heat rates (59k and 65k, respectively). Of course, the Day Ahead market is a guess and these numbers could be way too low, way too high, or spot on. We won’t know which is which until about 10:00 pm tonight.

If you don’t want to wait that long, just look how the HA and DA markets have traded over the last couple of days.

HA is averaging about half of the DA prices. You draw your conclusions, mine is the relative strength of SP, fundamentally, is just not there. Contrast SP with NP:

At NP, the HA and DA about average to the same price. Perhaps there is something else going on at SP which makes the HA relatively bearish, but whatever it is, it isn’t taking place at NP.

The heat has been building in LA, too: 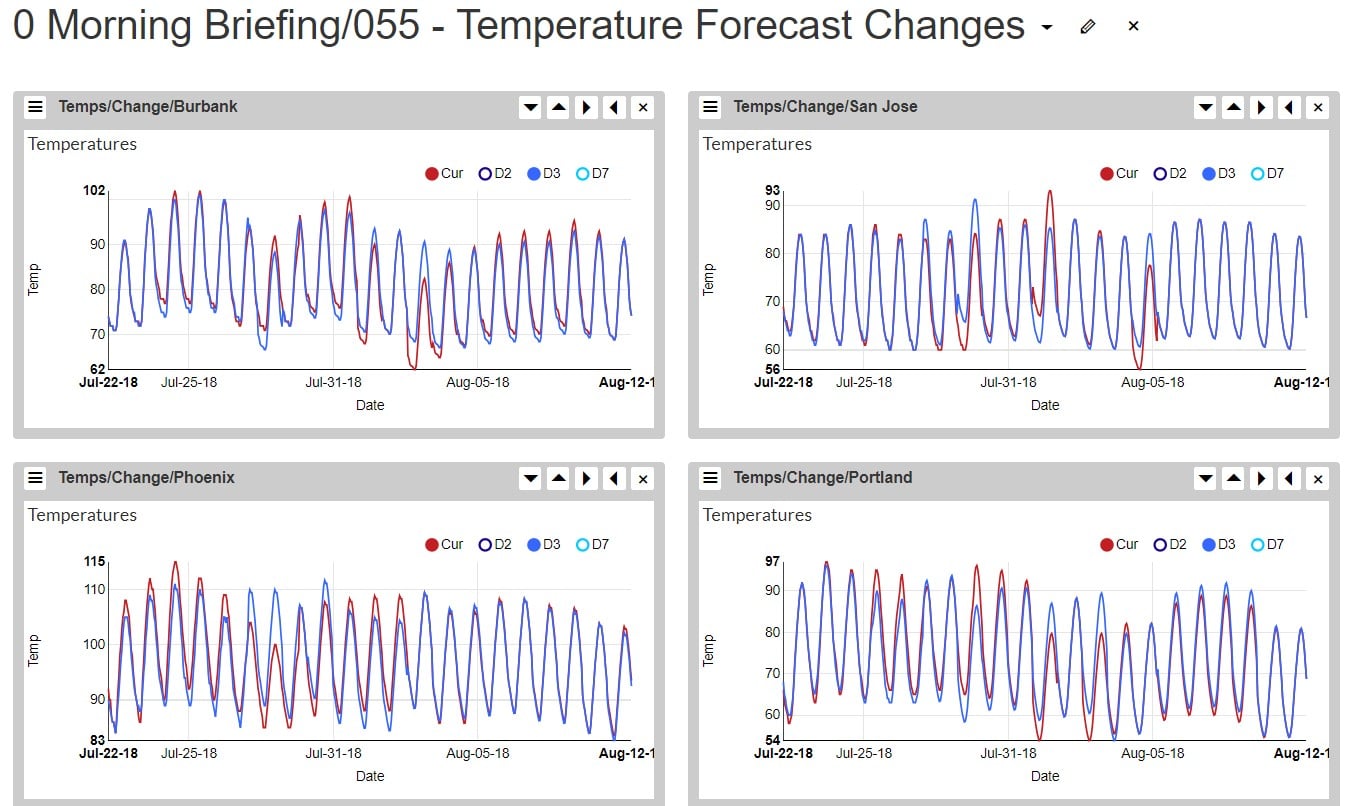 Both Tuesday and Wednesday had builds plus there is another event in days 7-8. The above is a new dashboard that plots the current hourly temperature forecast alongside the forecast from three days ago.

NOAA’s 6-10 day shows some cooling versus a few days ago, but the NWS’s tabular forecast has a slight warming in LA. Note how cold the rest of the US is, that bodes poorly for Nymex. But Socal Citygate might as well be in Japan, the hub has completely disconnected from the rest of the universe. 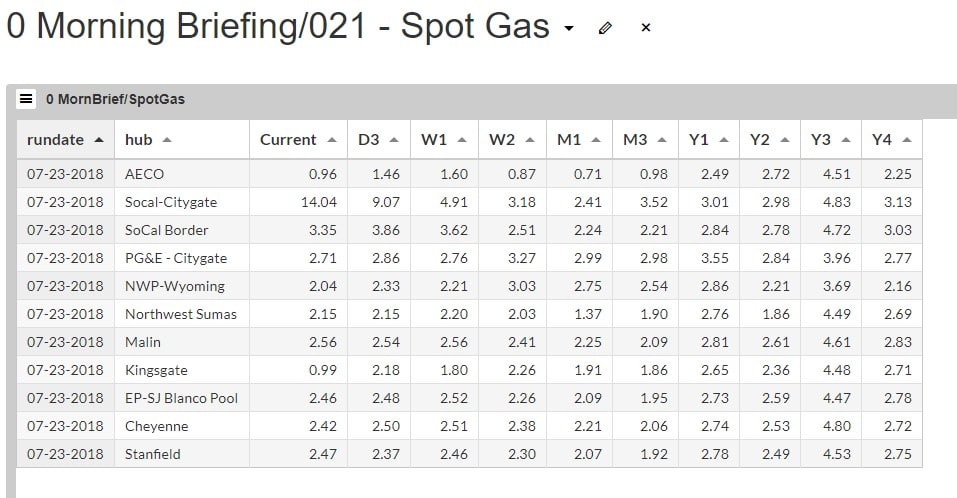 Spot Citygate gas for Monday settled at $14.04, nearly as high as the February Cold Snap, and on those dates, there was an additional 1bcf of heating load that isn’t around today. Check out the collapse at AECO and Kingsgate, both broke the buck. With a weak Nymex and massive Canadian gas, the Northwest’s term gas market will remain weak for the foreseeable future. All of which makes MidC’s Aug and Sep prices laughable.

This plot includes Socal’s forecast for Monday; note how much lower that number is versus those Feb days. Perhaps the fear is the rest of the WECC will be so terribly hot that SP15 imports will be non-existent. Don’t bank on that, Seattle is in the mid-80s, so is San Jose and San Diego. 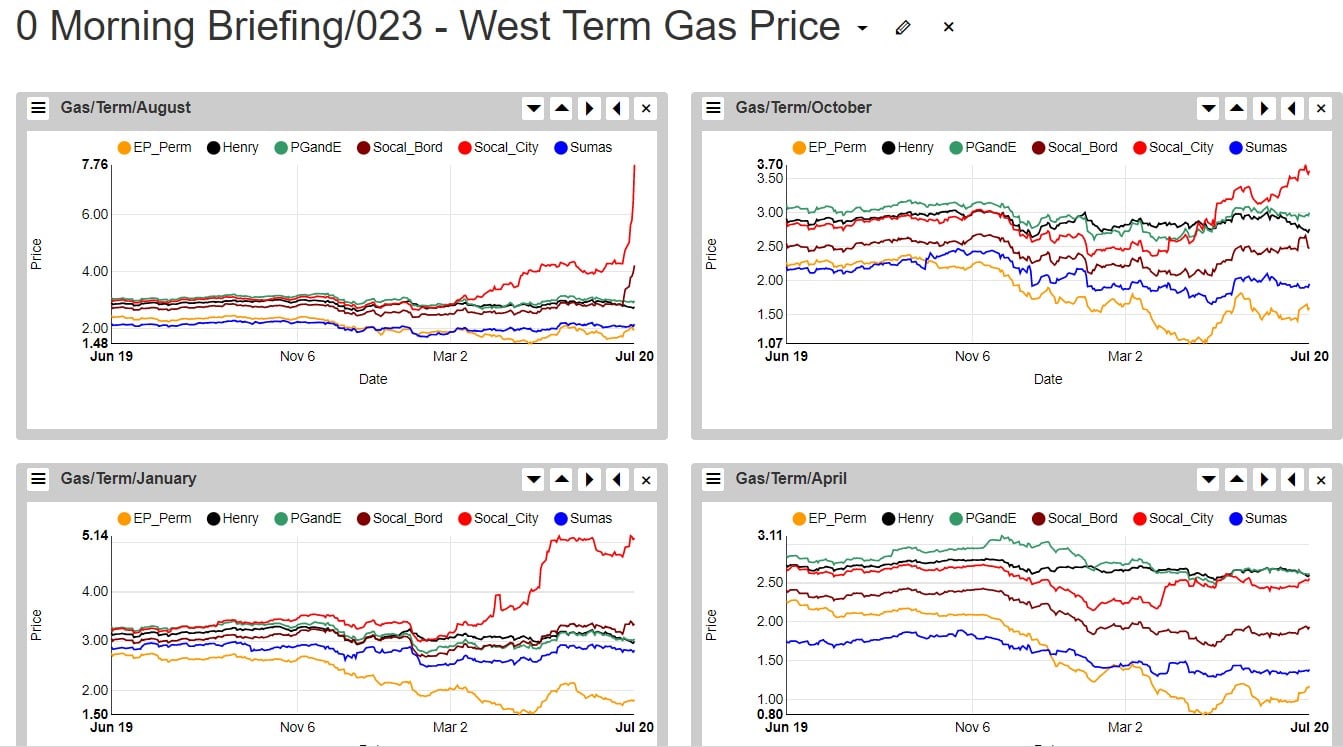 Yet Summer Socal is soaring, though none of the other bullets have rallied near as hard. Speaking of rallies, the Aug and Sep power markets are absurd:

To me, at least, none of these hubs, aside from SP, make any sense without huge heat in both Aug and Sep, yet they’re priced like that’s a certainty. We were biased short on Thursday and even more so today.

Loads at MidC on Saturday were off from a week ago, though Sunday’s rallied. Portland is looking at ten days of above normal temperatures though none of those days come close to the ten-year highs. Even during the hottest days, Seattle doesn’t get above the mid-80s. Sorry, this isn’t Mid-C crazy bullish, not with full reservoirs and a very healthy BC Hydro.

More telling from the bear’s perspective are the relatively weak temperatures in NP15, even Sacramento can’t break one hundred will San Jose is comfortably in the mid-80s. To break the WECC you need all hubs at peak on the same day, this event doesn’t do that though you couldn’t tell from term power prices.

Then there is SP15, that hub’s heat is real and has been building over the last couple of days. That second heat wave, starting around day 8, caught me by surprise. All bets are off at SP as we wait patiently for Tuesday’s daily market. If prices are a bust, and we think they very well could be, then prepare yourself for the biggest selloff in the last 17 years. If Tuesday’s DA posts a huge number then things may rally even more.

Palo is going to have issues serving its own load, temperatures are projected around 115 and a new record. Vegas is right there with Phoenix, and Palo’s Sunday loads soared, week-on-week.

SP’s solar dropped a couple of gigs on Saturday but rallied back today. SP’s wind did not rally which may bode poorly for this week. MidC had a very good day with its wind turbines. 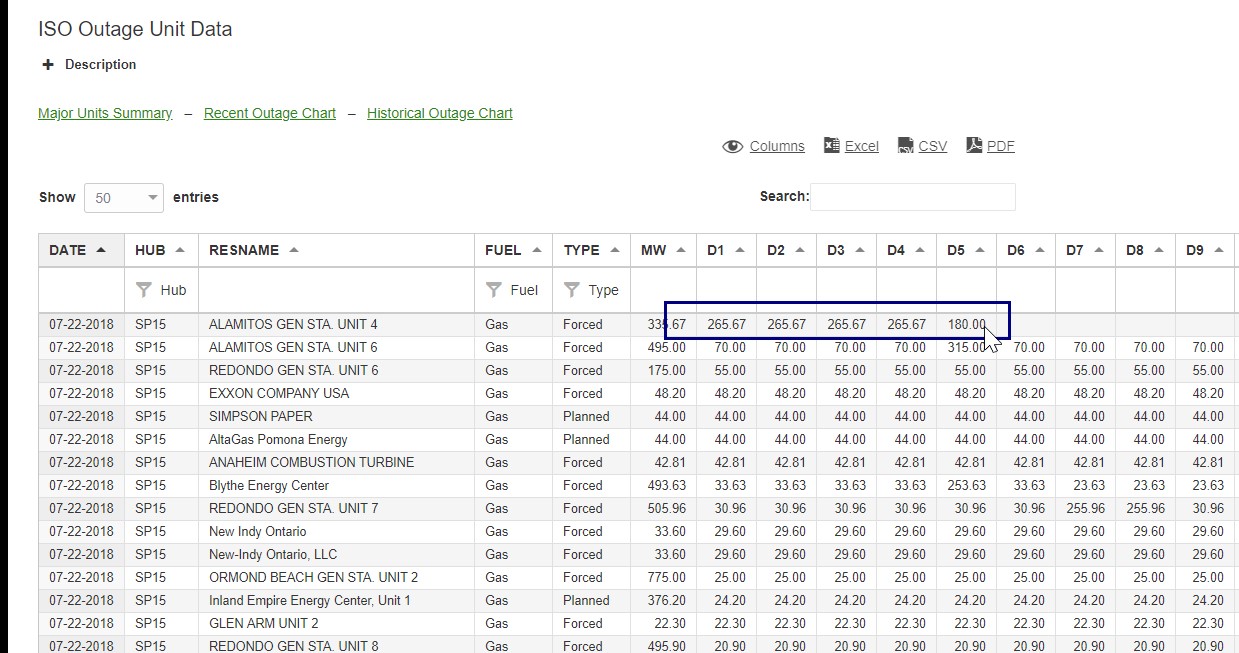 All generating units are ready for service except for one of the Alamitos units. Whether all those units will be called upon, or whether there will be gas for all those units to burn, remains the billion dollar question. 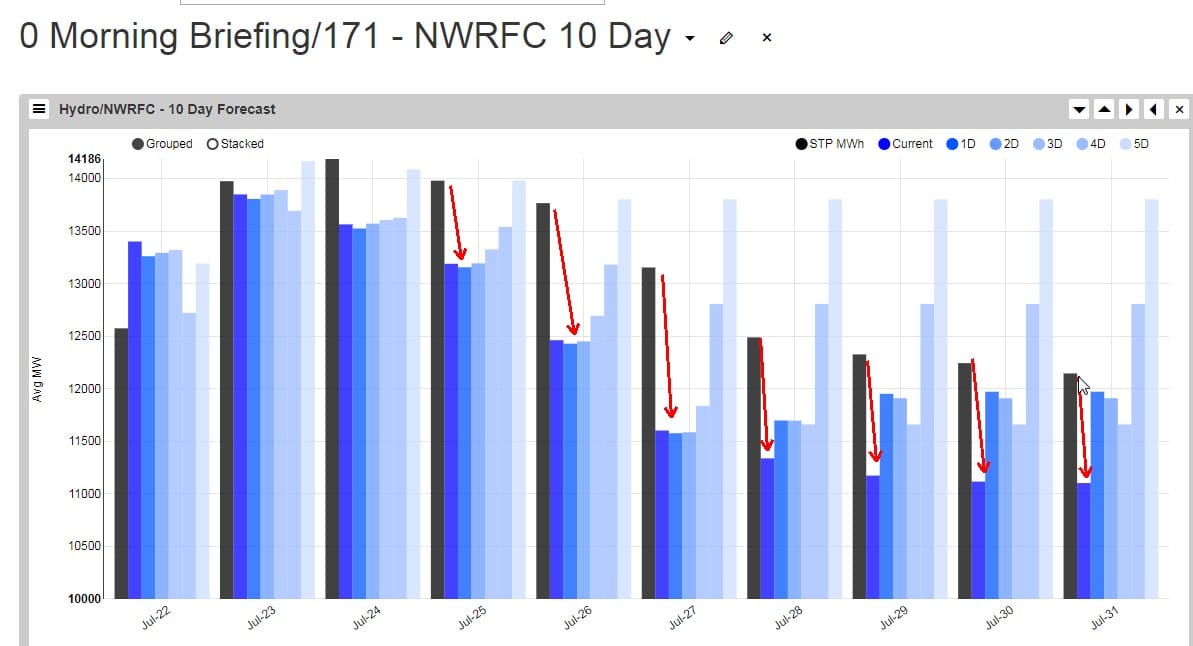 The most recent NWRFC’s 10 Day forecast is odd – they cut a gig out of every day. You’d think BPA would be drafting into this bull run so it could slap triple digit bids, but apparently (if you believe this 10 day) they are cutting flows. We don’t think that is even remotely possible. 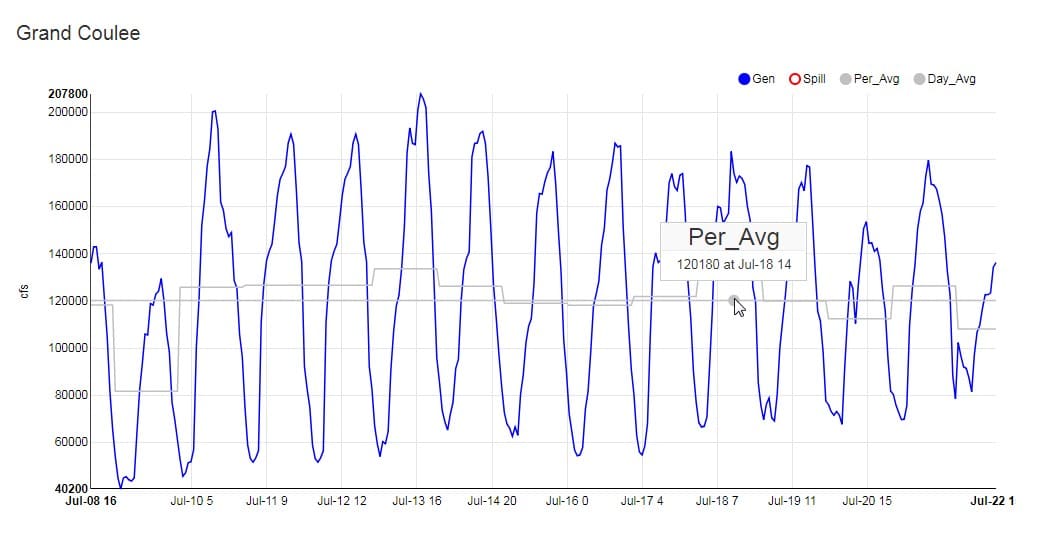 Coulee is averaging 120 kcfs discharge while its hydraulic capacity is around 200kcfs. Perhaps what is spooking BPA is the reservoir? 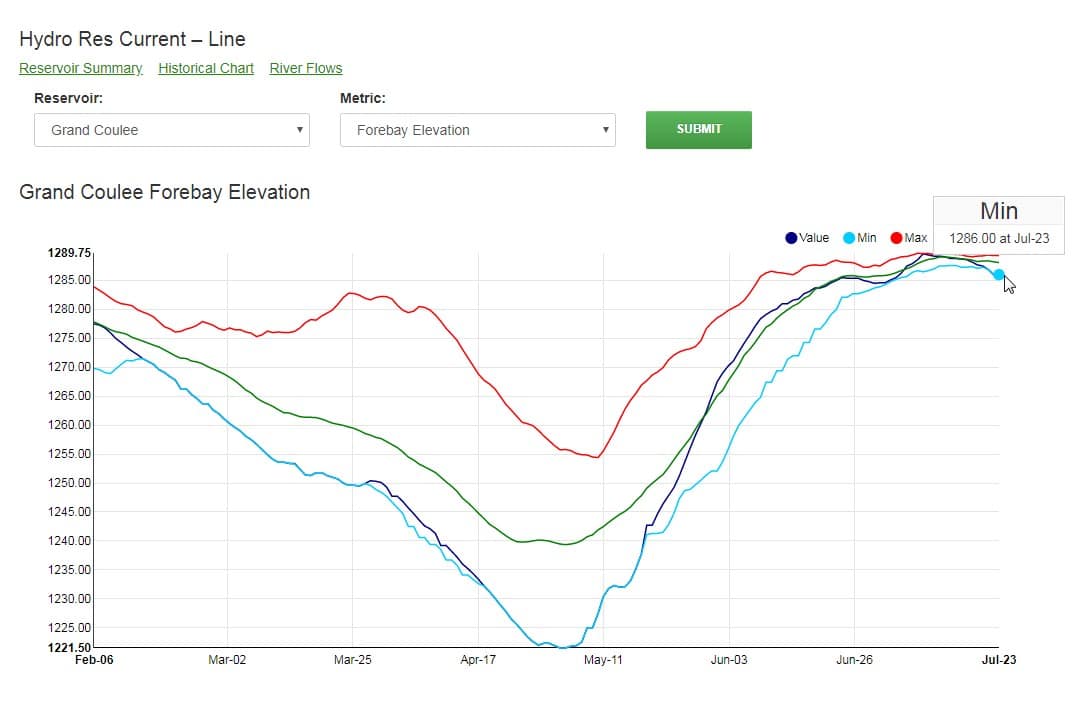 Take note of the Columbia River flows at the border, these are bouncing along at near-record low levels. Perhaps that is why Arrow is drawing down more. Finally, look at the amazing shaping capacity of the Peace. At 50k it’s about 3000 MW and linear down to 0. If the Northwest needs energy, the Peace can serve it, as long as there is room on the lines (see Transmission).

Back to California, note the total reservoirs are off 2 MAF from last year but remain above normal. If California needs the energy they have the water. 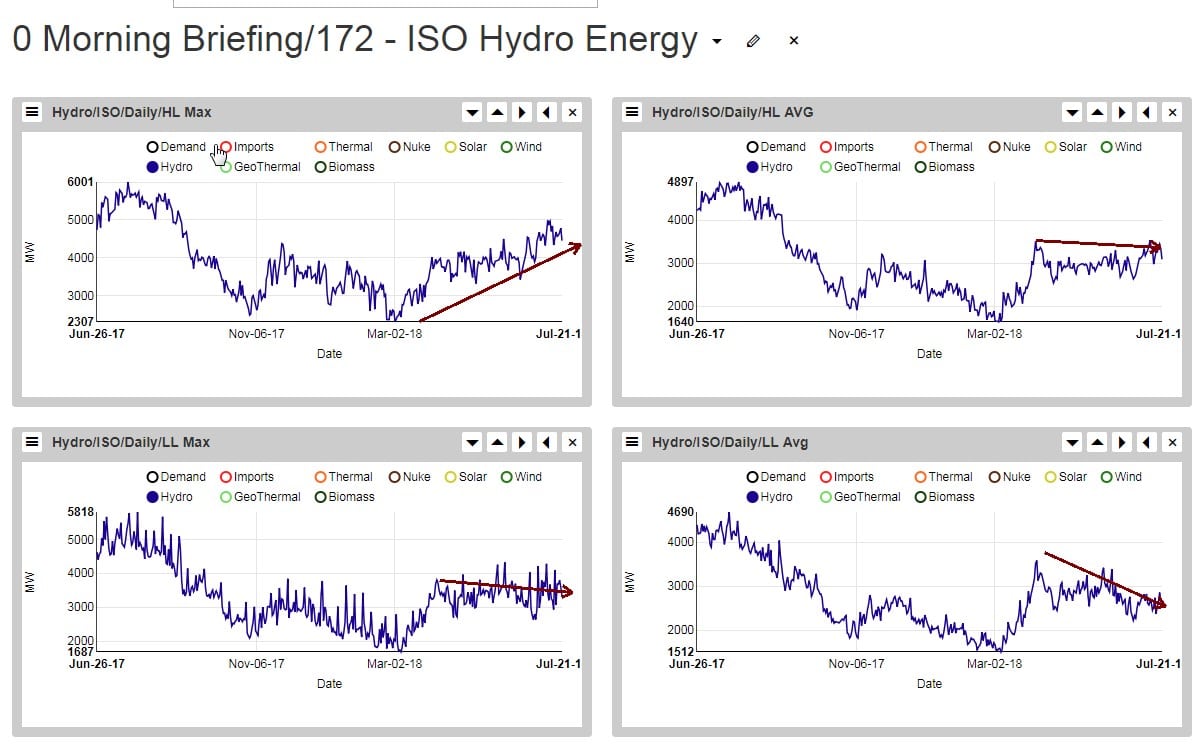 This dashboard compares peak hydro energy to average; peak has been steadily increasing since March while LL and average are sideways to down. If the ISO needs energy it will pull even harder.

Finally, we will conclude with Transmission. The NOB’s total loading is off, strange because the ISO prices have been so strong. The COB is even odder, the line wasn’t even half-full today. Meanwhile, the Northern Intertie is basically unused suggesting there are an additional 2 gigs of potential energy on any hour that it is needed. One would think our Canadian friends would be forward selling 2000 MWs of Aug and Sep MidC and cover it with the Peace.

The moment of truth will be Tuesday morning when the Day Aheaders factor in Monday’s reality. Right now, the SP prices are heatrate-reasonable but the rest of the WECC prices (expect for PV and Mead) are just plain stupid. We are strongly biased short, especially at NP and MidC.