I look at those plots and all I can think of is “SELL”, but anyone who followed through on such foolishness is probably looking for a job. That said, these prices outside of SP cannot be supported by the fundamentals, no way.  SP, maybe, but just because of the neurotic Socal Citygate behavior. The rest of the hubs are ridiculous, especially from a heat rate perspective.

29k heat rate for the last 12 days of July, sorry, don’t buy it. Sure, Portland warms up, it even touches 100 degrees for an hour or two, but then its back to high 80s and low 90s. But runoff is over and BPA’s seeing cuts in inflows, oh no. LOL, the reservoirs are full for exactly this type of reason, maybe the MidC generated a 80% plant factor on peak today, that still leaves 4-6 gigs of potential energy to serve incremental demand. And don’t expect any new load from exports:

The NOB was full almost every hour over the last 24 hours; any marginal load in SP will only impact the MidC via that virtual HypeLine. The COB isn’t full, but we’ll suggest NP won’t need much energy either, the bottleneck is Path 26. Also note BC’s actions of late, they actually imported energy into Canada; call that another 1000-2000 MW resource waiting upon any bullishness.

Nope, just don’t get the MidC rally and would short it here. But, before we do something dire like shorting BOM amidst the most hellish bull run we’ve seen for a long while, let’s look at Aug and Sep.

OK, everything is up in parallel to BOM. Why? The heat ends on July 25, maybe the 26th; no one’s forecast suggests August will be hot or cold. Why the rally? SP is easy, term gas is way up. 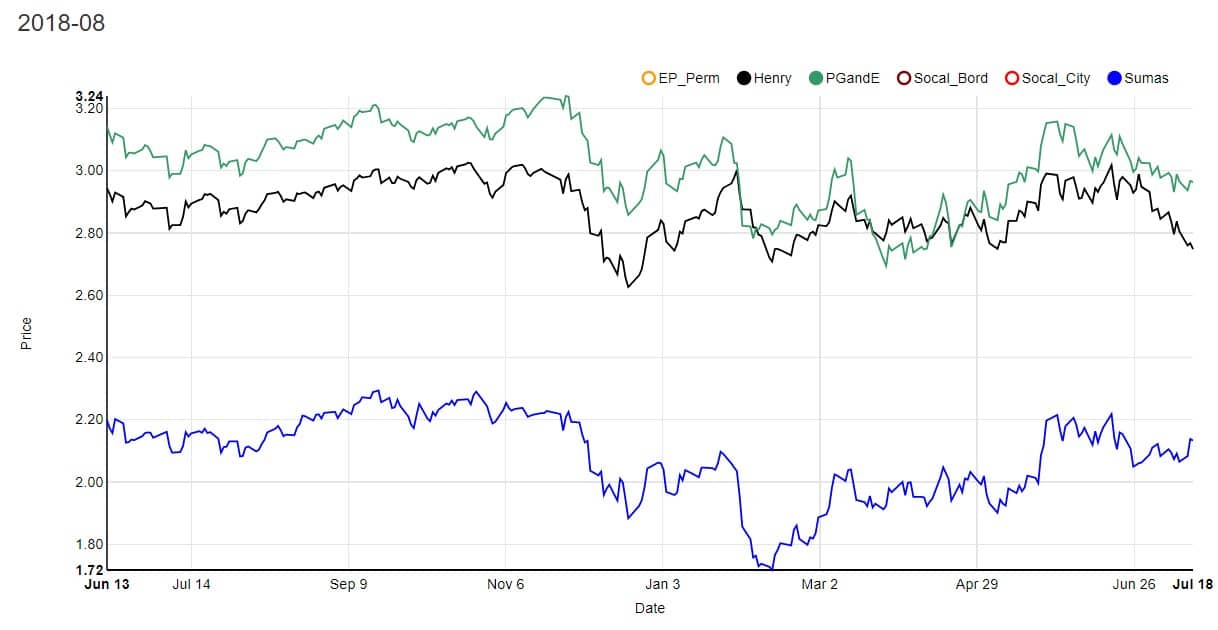 PG&E came off and Sumas is sideways all of which means NP and MidC’s heat rates soared. Sorry, we don’t buy it, the fundamentals don’t support the Aug move. How about Sep?

Same story, all are screaming and only SP has a fundamental reason for moving. Would I short BOM or Aug/Sep? I’d probably do the latter because both are even more irrationally priced than BOM, but I’d be fine shorting all three today. That said, will the markets tank today? They might, some of yesterday’s move was off of a warmer forecast than Tuesday’s: 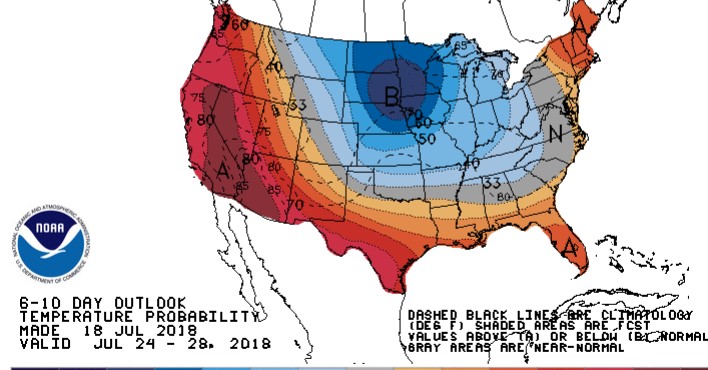 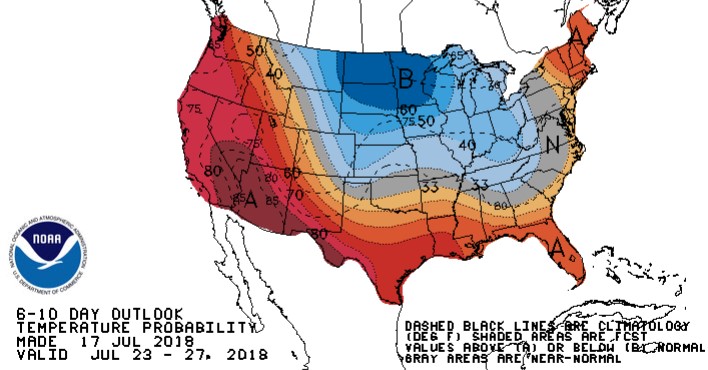 What is notable about both forecasts is the relative mild heat along the coastal load centers. These are warm forecasts for everywhere but the California, Nevada, and Arizona deserts; the rest of the WECC just isn’t that hot. Further, the rest of the US is mild to cold and Nymex will probably get pummeled even further, all of which makes those Aug and Sep markets look even more miss-priced.

One other observation. What goes up “really fast” comes down “really fast”. If you want to get paid you have to sell into the bull market, waiting for confirmation will mean you missed the train, it will have left the station.

Just food for thought, I’m not trading, you are, but you must admit these prices make it tempting to short outside of SP, especially in Aug-Sep. Before moving on to the rest of the fundies, let’s look at the LMPs:

Wicked high clears for a set of mild days at SP, but not when you look at heat rates – those are like March heat rates. And look how congested NP is to SP (and NOB trading upside down):

Interesting that Captain Jack separated from NP today; Palo has stayed tight to SP and will continue as AZ struggles to meet load; NP and SP have completely separated.

We’ve shown the volatile term gas markets, but spot’s not, outside of any hub not named “Socal”. 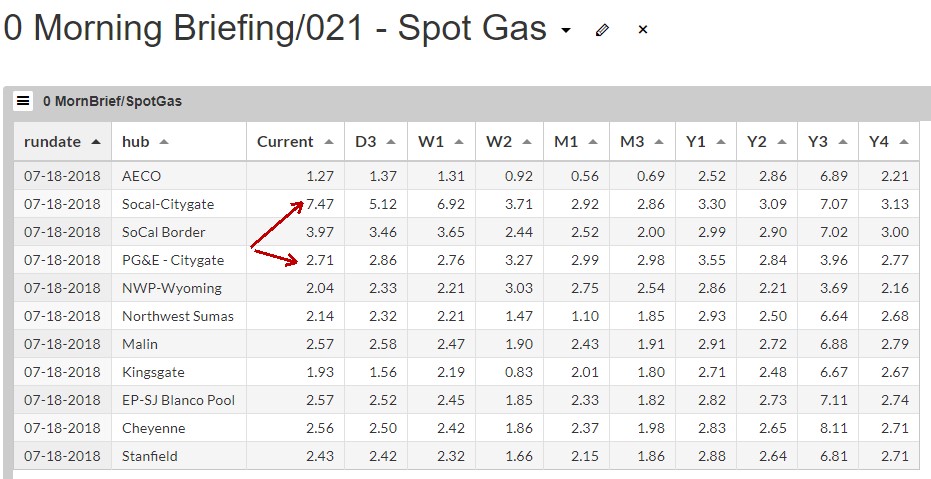 We kind of get the $7.50s at Citygate but don’t really get the $3.97 at Border. The problem isn’t east of Topock, it’s west, and there are a lot of outages. Just today, Socal announced work on the PG&E Wheeler Ridge which will take out 150 MMCF during the heat wave. They say there is over 1 BCF offline for maintenance: 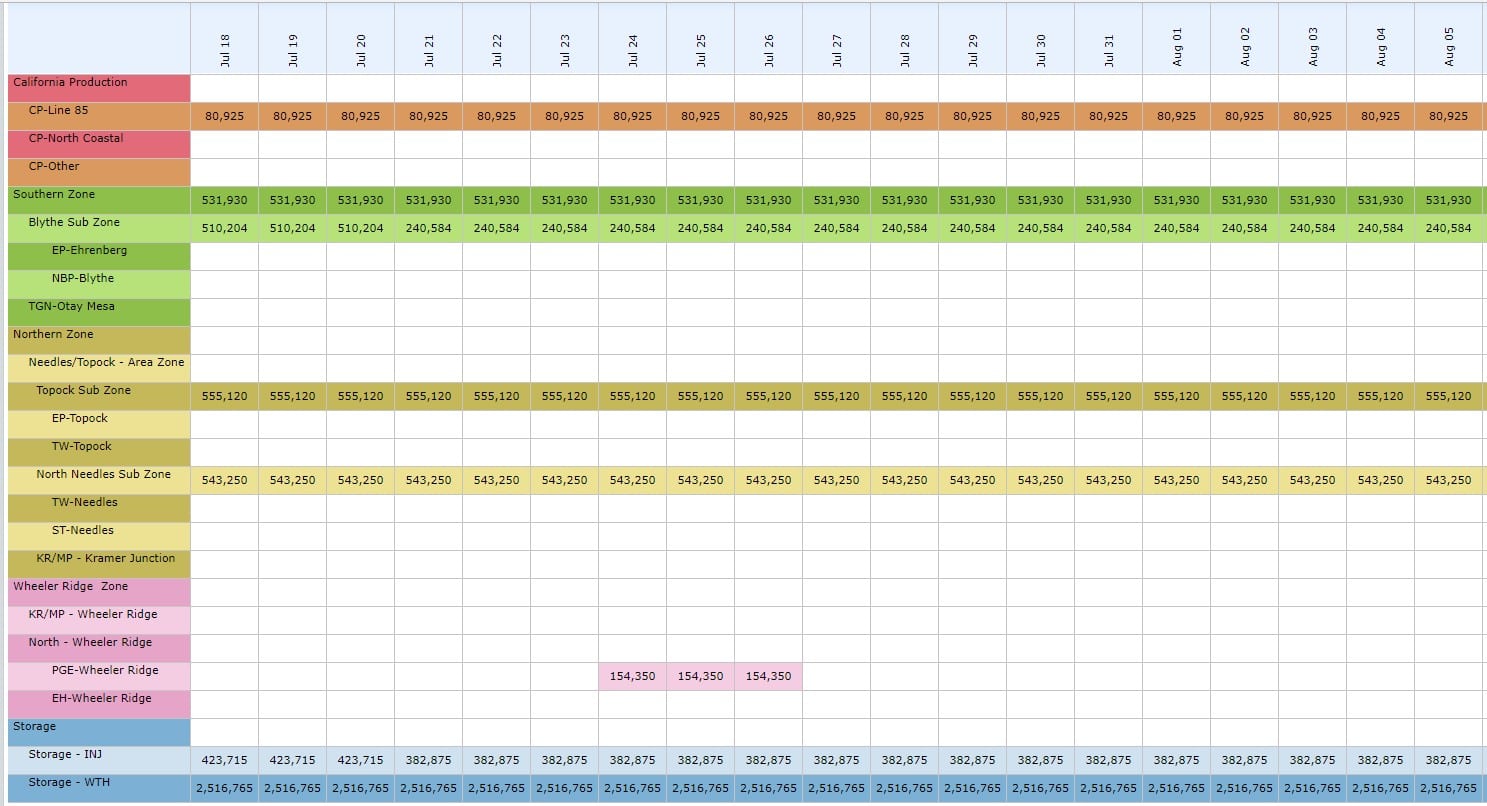 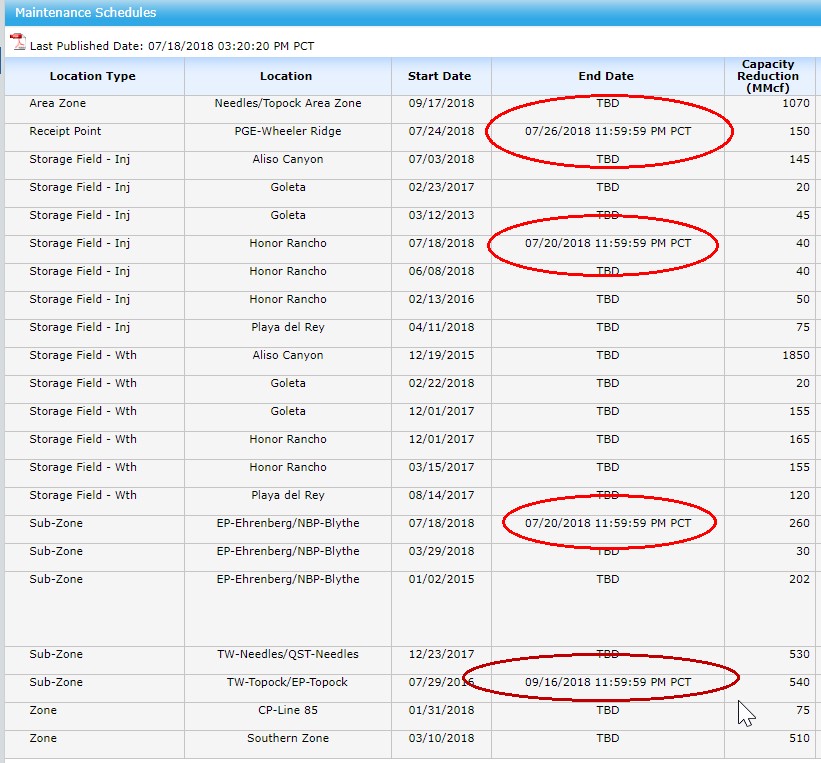 On top of that, the Transwestern Topock issues are fixed by the middle of September and will add 540 MMCF of supply. But forget Socal Citygate, the other gas hubs have no supply issues, in fact there is a supply issue – there is too much gas in Canada which is why AECO barley can bust the buck. With the rest of the US cool to cold, Henry may take a dive and put more downward pressure on WECC gas. 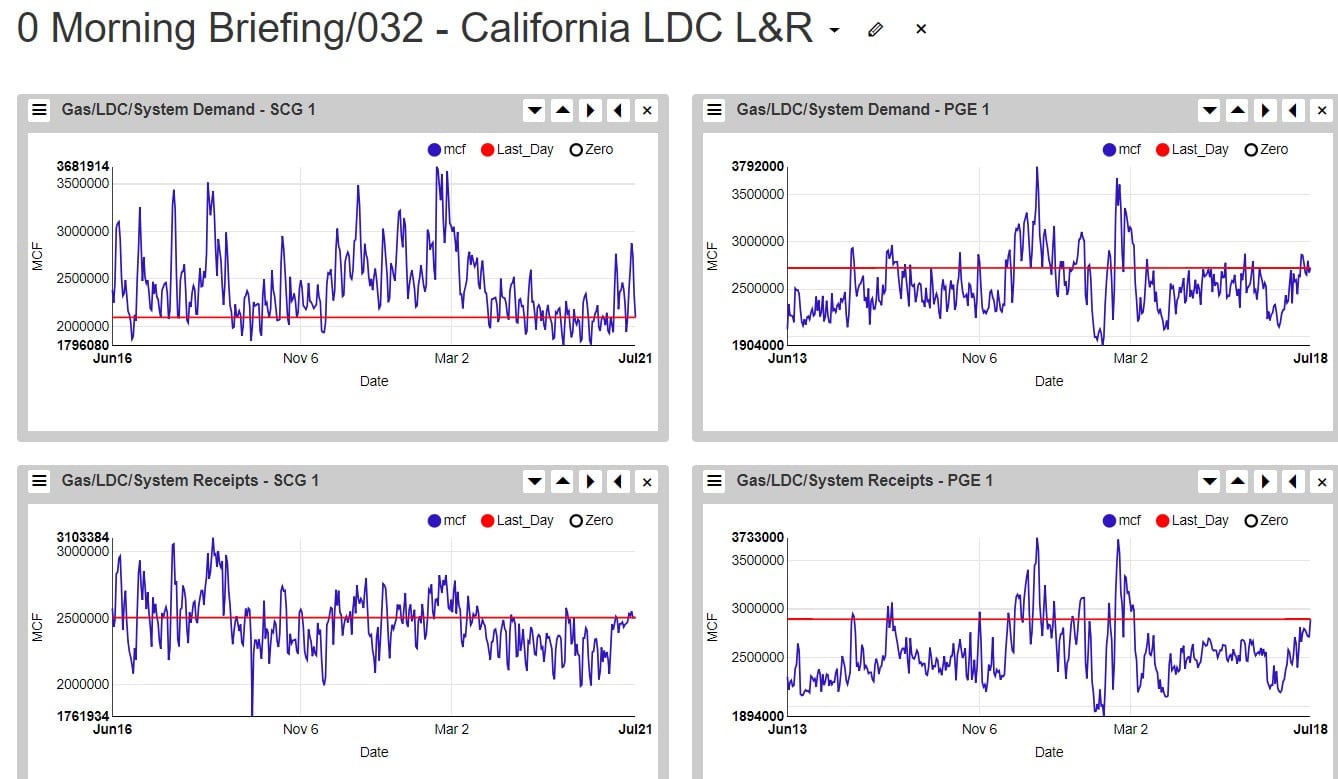 An unimpressive Supply and Demand recap for the Cal LDCs. Socal’s demand is way behind last year’s in cumulative MMCF, so is PG&E. Both LDC’s have seen a surge in supply, too.

Palo’s loads surged yesterday only because last week was so cold; note how the hub’s loads are behind two weeks ago. Yet heat is on the way, the rest of July will be above normal, on some days almost ten degrees above normal, which will only compound SP15’s problems since all heat across the WECC is coincidental – happens on the same date.

Like PV, SP15 will have a long string of days above normal, but none of them are insanely hot, just above normal. Of course, the risks here are that temperatures build in each subsequent forecast, then we are truly in apocalyptic time, should that happen.

San Jose peaks out at about 90 degrees and is well below record highs for this time of year. Loads are mostly sideways to last week, even Sacramento isn’t that hot.

Check out Portland’s heat wave, mid 90s, but even on that single day it doesn’t hit the ten-year highs, and the temperatures quickly mean revert to the mean. Loads soared off of slightly warmer weather, in the 80s in the City of Roses, while the Emerald City couldn’t post an 80 handle. Another bearish factor in this current weather forecast is the lack of heat in the MidC interior – Portland OR is warmer than Spokane. Not that there is that much load east of the Cascades, but the fact remains BPA will have an easier time serving its loads than a typical Northwest scorcher. 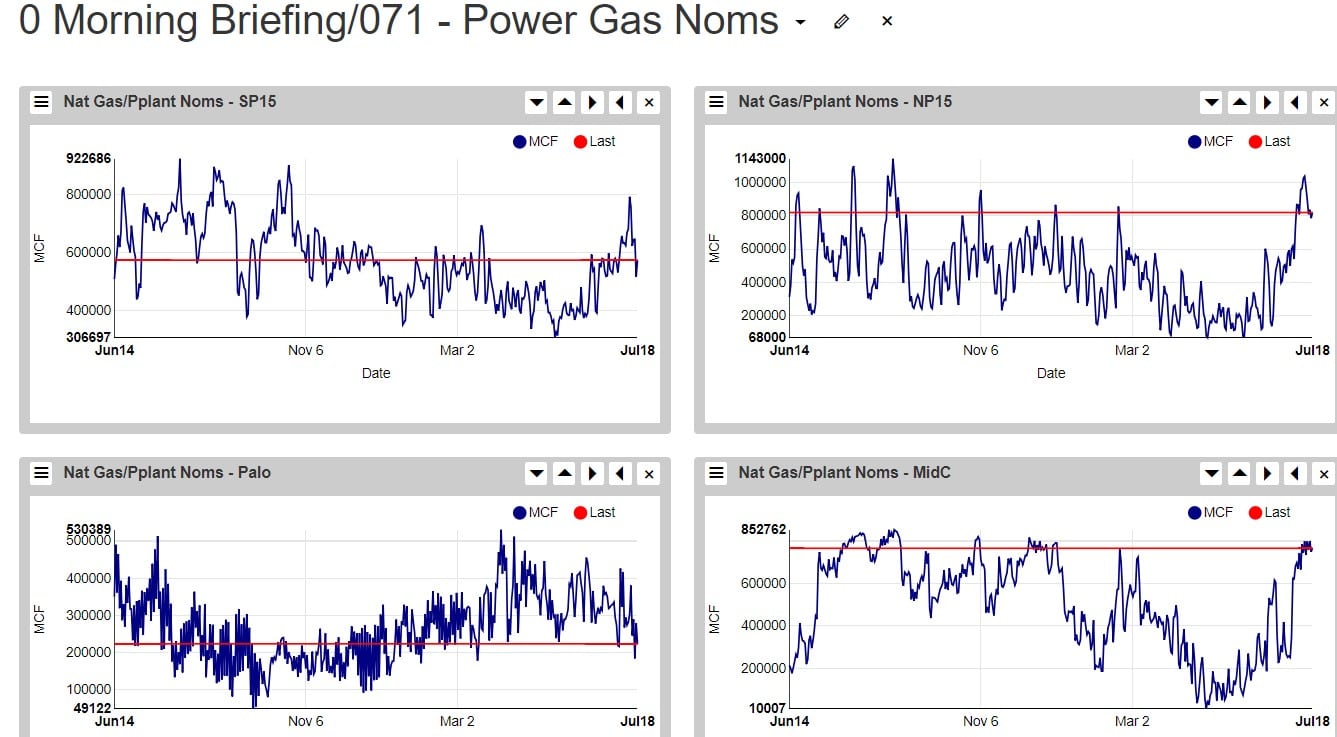 NP and MidC are seeing summer high power gas nominations while Palo and SP aren’t. It will be very interesting to see how much SP gas is scheduled on Sunday for Monday – be sure to log in and check it out. The MidC doesn’t have much idle gas capacity, incremental load will be served from drafting reservoirs and pulling energy out of BC. 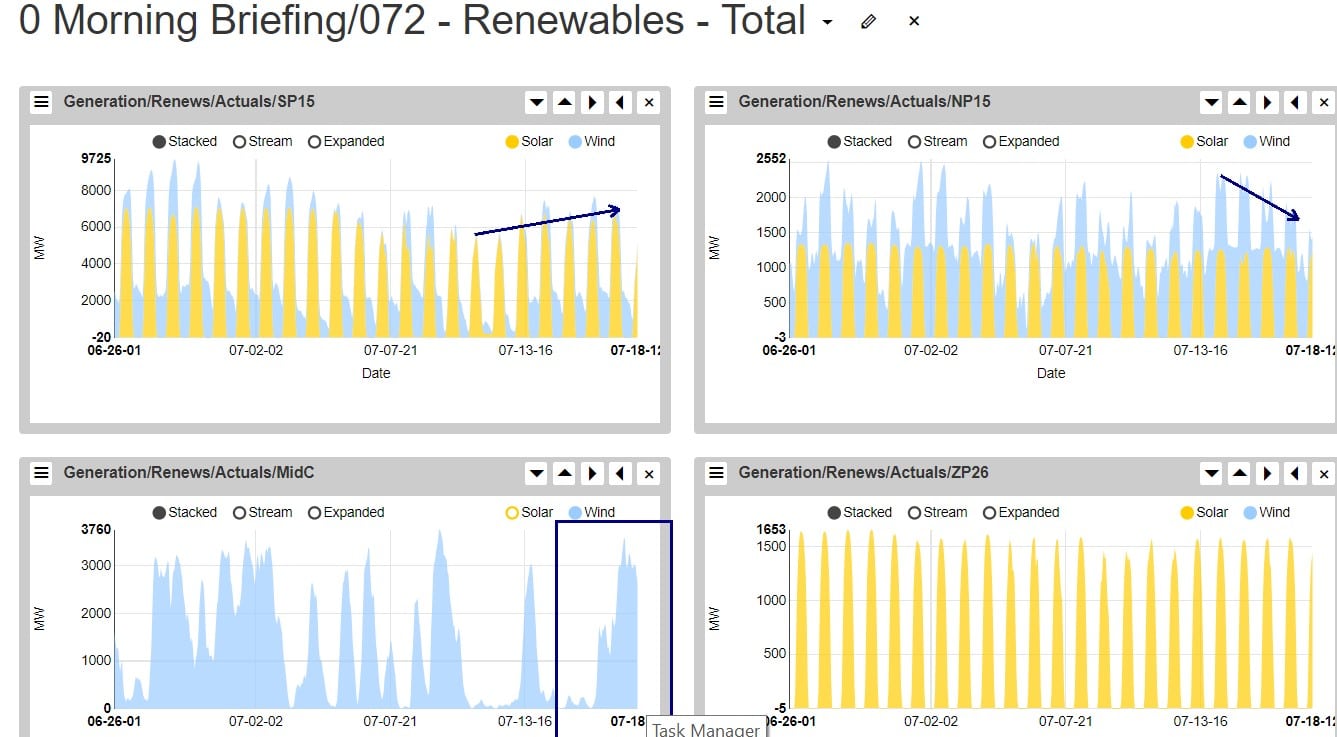 Wind has been reasonably robust the last couple of days in both the ISO and the Northwest. 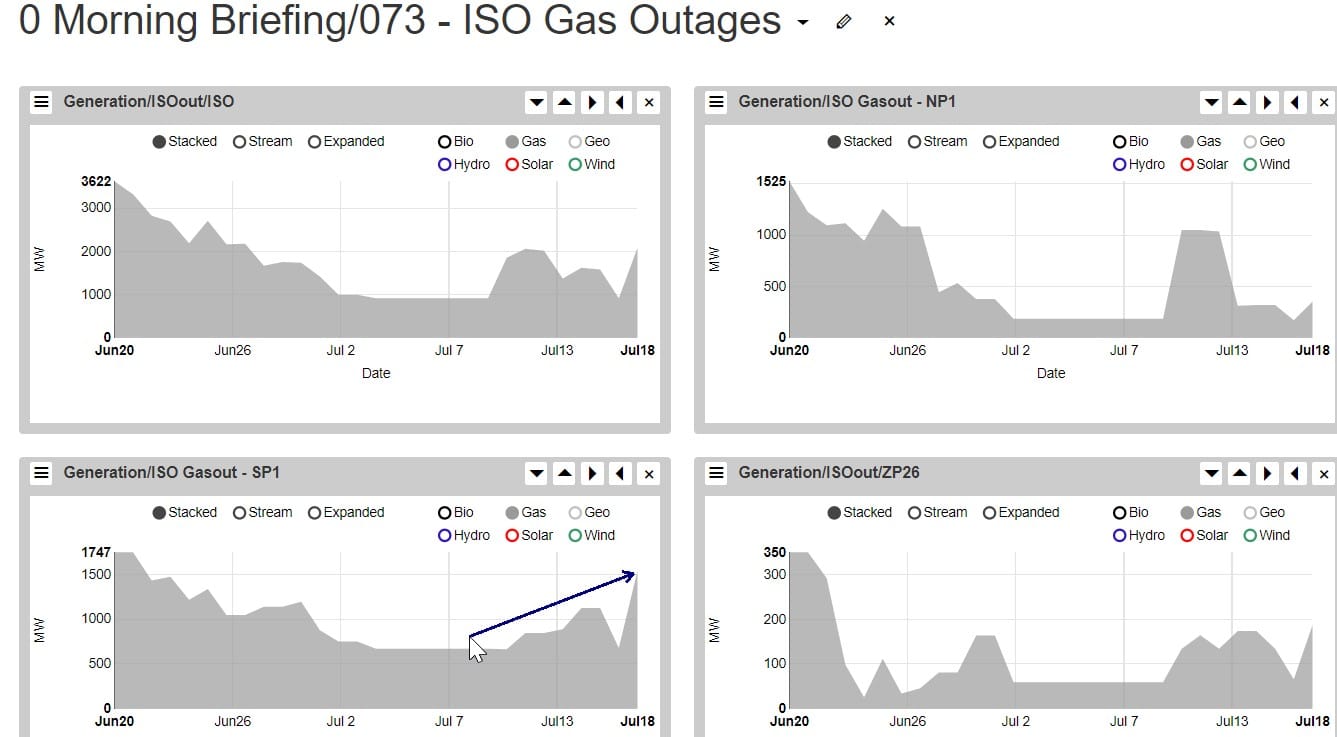 Gas outages at SP15 are up: 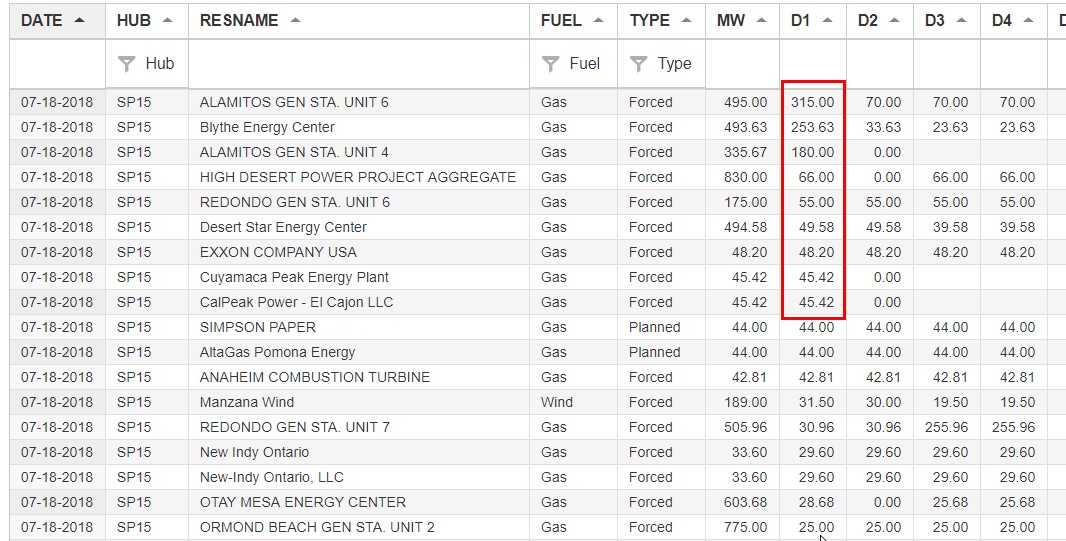 Several units tripped, of course right before the heat wave. None are plant-wide, all are unit level and I’m sure the grease monkeys are scrambling to get them online before Monday. I guess that’s whay you don’t see the gencos forward selling into this rally – they have no confidence in their unit’s availability.

Coulee averaged 120kcfs and its hydraulic capacity is close to 200kcfs. In other words, at 5300 MW operating capacity, BPA could have generated an additional 2000 aMW of energy yesterday. Of course, that would have driven a 1-2 foot draft in the reservoir, but it is full today. But it is not just the extra 80 kcfs passing the turbines that you need to consider, it is the 80kcfs that is going to pass through an additional 6000 MW of capacity downstream, starting at Chief Joseph and ending at Priest Rapids (forget about the Lower Columbia, this story gets even more bearish when we take those 5000 MWs into play). That puts Chelan, Grant, and a host of Slicers longer than they thought, plus it takes a few days to work through. Bottom line, BPA can meet its loads, easily, and by doing so it just made the MidC long. With these sky-high BOM prices it is so tempting to short, right? 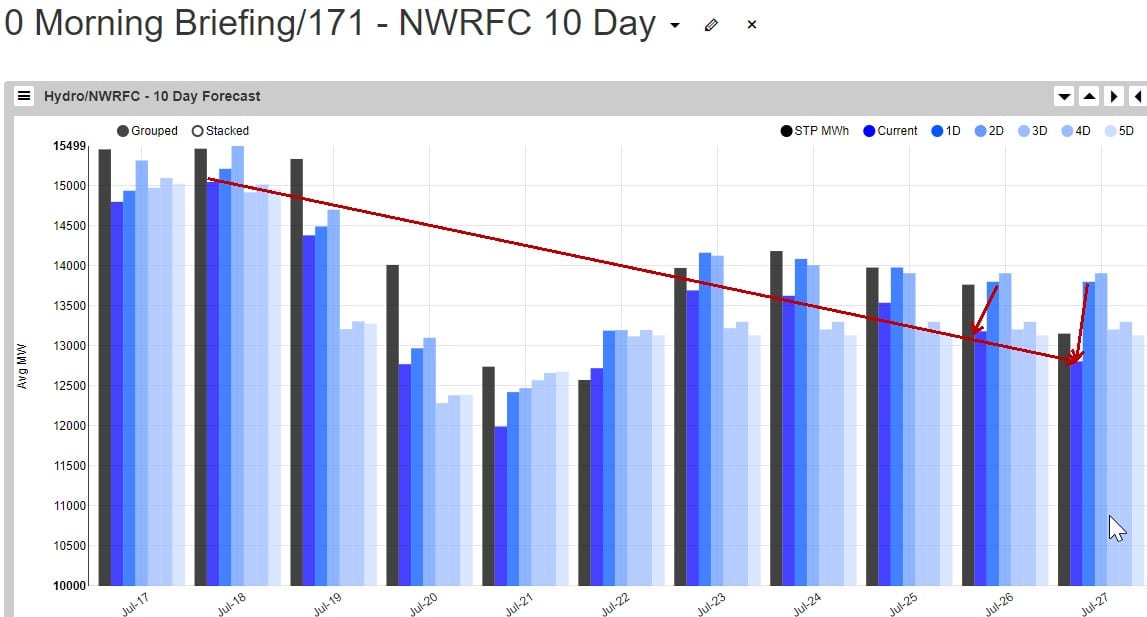 We don’t see any indication BPA intends to draft anything based upon the RFC’s 10-day, but we know they have the right and ability do so and we’ve always wanted our book to look like BPA. They must be salivating over the 30k heat rates on a relatively mild Mid-C summer day.

Short at your peril, I would, at least at NP or MidC and the latter is the best candidate. If you fear BOM, and you should, sell a piece of Aug or Sep, I’m confident you’ll buy it back for handy profit.