The Northwest is quite warm, and the rest of the WECC is quite not. Northwest export LMPs are quite strong while SP’s are a trainwreck. Seattle was 20 degrees warmer than Burbank, go figure. On top of that warm weather, streamflows are dropping fast all the while BPA “struggles” to fill its reservoirs. Not all is lost in the ISO, heat is on the way, but not that hot and not until later in the week.

Check out the heat rate spreads between NOB/COB and SP15 – like 15k to the Northwest. Even the outright prices are premium at NOB which begs the question – “Which way is energy flowing?” Of course, it is flowing into SP at a negative spread; toss in the 15% losses, and it gets even odder.

Another bearish trend is building in the Citygate — 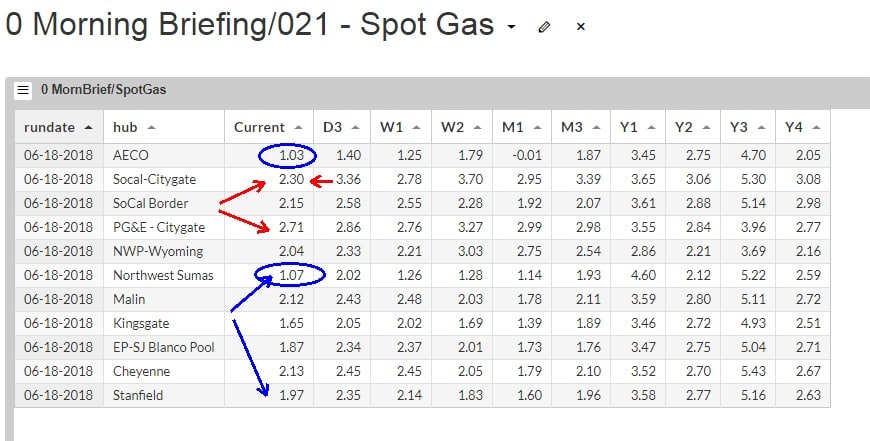 PG&E was premium to Socal by $0.40; the latter tanked $1.00. And that Canadian gas just keeps getting cheaper, now AECO and Sumas barely clear a buck. Check out the spread between Sumas and Stanfield – nearly a $1.00. That is something you don’t see every day. So what’s the Citygate term traders doing when they look at cash clear in the low $2s? 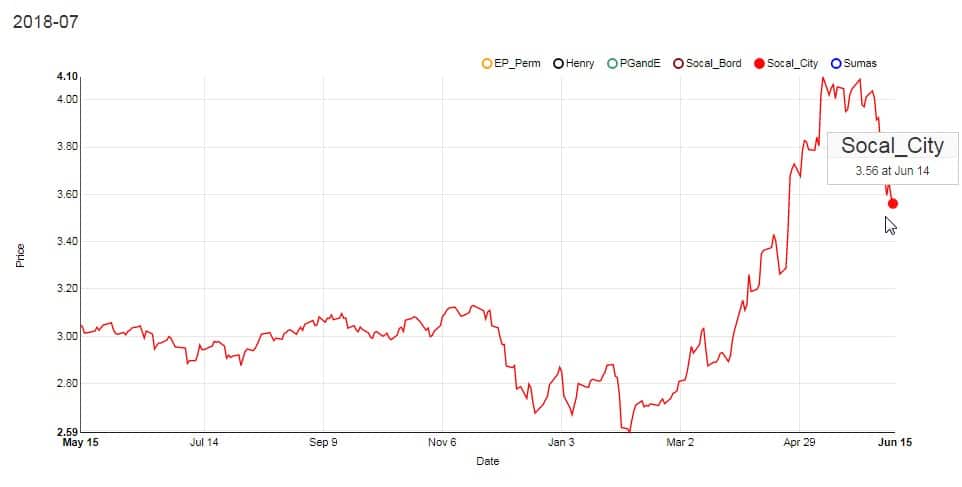 LOL, they be puking, and we think there is more retching to come. Unless cash starts clearing with three handles the prompt has nowhere to go but down. 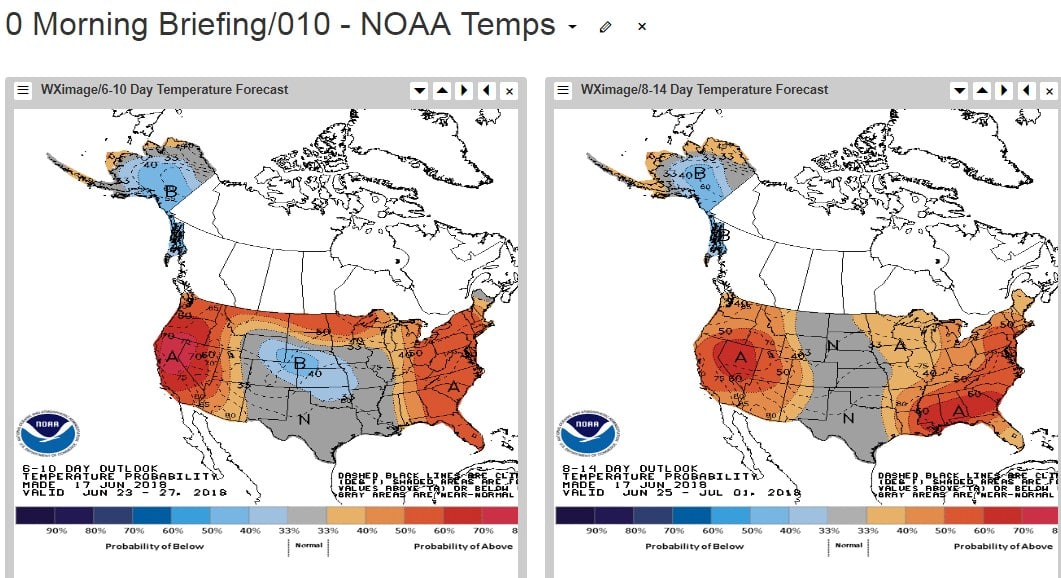 Did we mention it was hot in the Northwest? Seattle hit 87 yesterday, and Portland sported a 90 handle. Oddly, it was hotter in these load-center cities than Spokane. Loads soared off of the heat, the Mid-C realized about a 1500 peak demand week-on-week rally and the heat is not leaving, it is growing warmer. Interesting, because streamflows are crashing while loads are rallying – and the reservoirs are not quite full. Hhhmmm, BOM anyone?

It’s pretty high, even after Friday’s sell-off, but the BOM is trading at where the COB/NOB LMP cleared while the ISO had a very bearish day. With Cal loads rallying, and the MidC is staying hot, maybe we some clears in the 40s, and we doubt we see any congestion at MidC.

Very weak weekend at NP, but temps are rallying and so will loads and prices.

68 in Burbank, in June? Hah, no wonder SP cleared under NOB. But like NP, temps are rallying hard and fast and so shall those bearish DAs.

Check out the temps at Vegas – hotter than Phoenix. All of the WECC will rally as the week progresses and should make for some tight cash in the Wed for Thurs markets.

Not a lot to say on this front, all the nukes are running, CGS is back to 100%. ISO outages are sideways, but let’s examine power plant gas nominations: 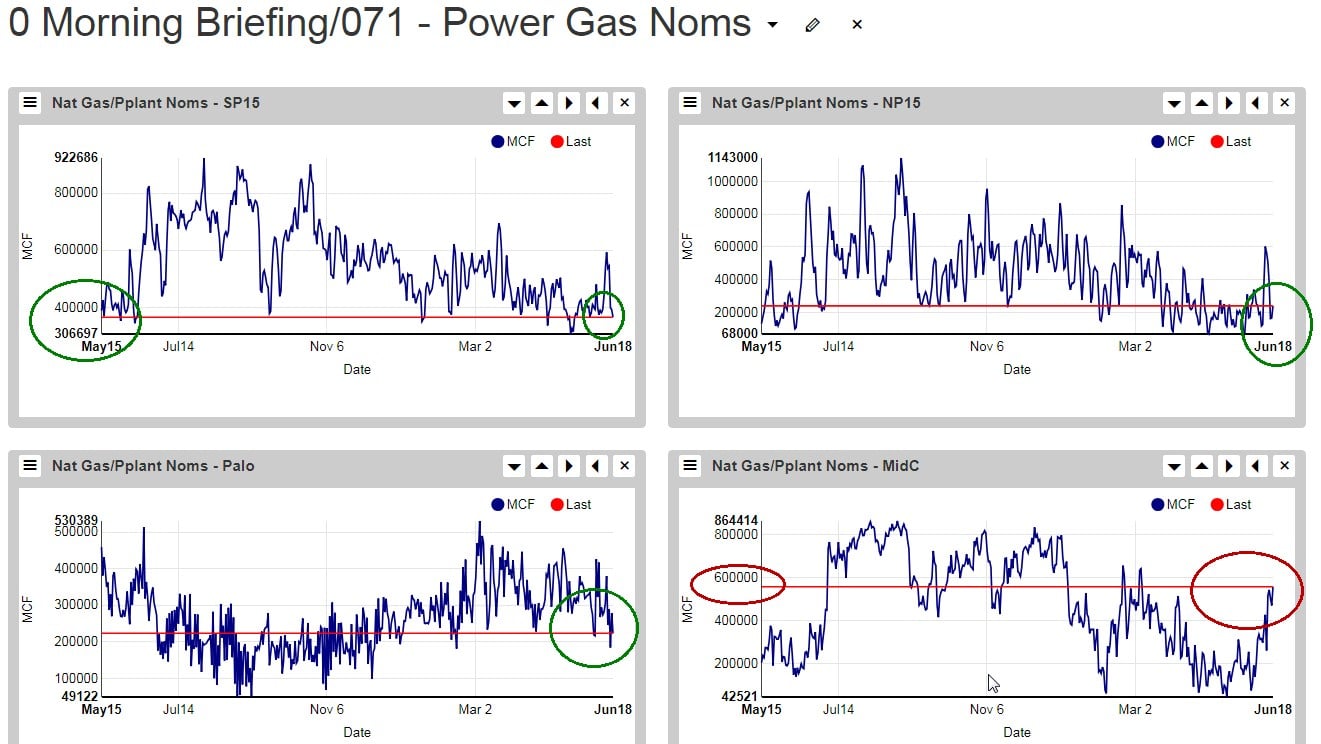 This is interesting. Both NP and SP set yearly lows, and it is middle June! The Northwest’s noms are screaming up, let’s dive deeper: 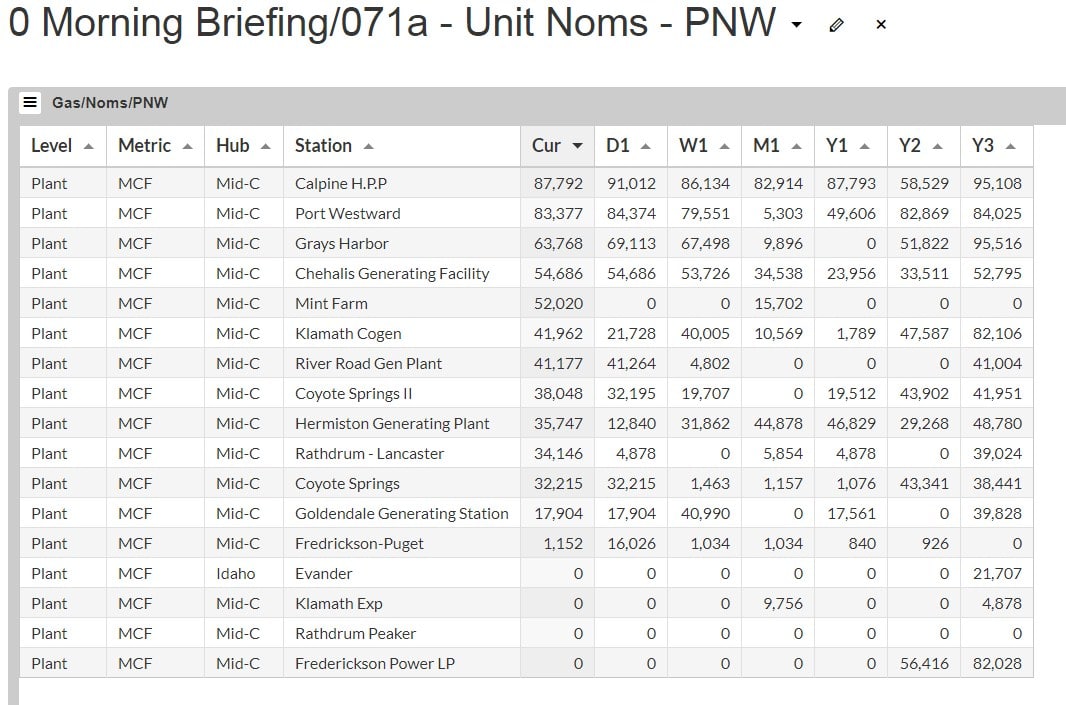 Everything is running except for a handful of peakers, and we wouldn’t be surprised to see those turn on later this week. Tight! 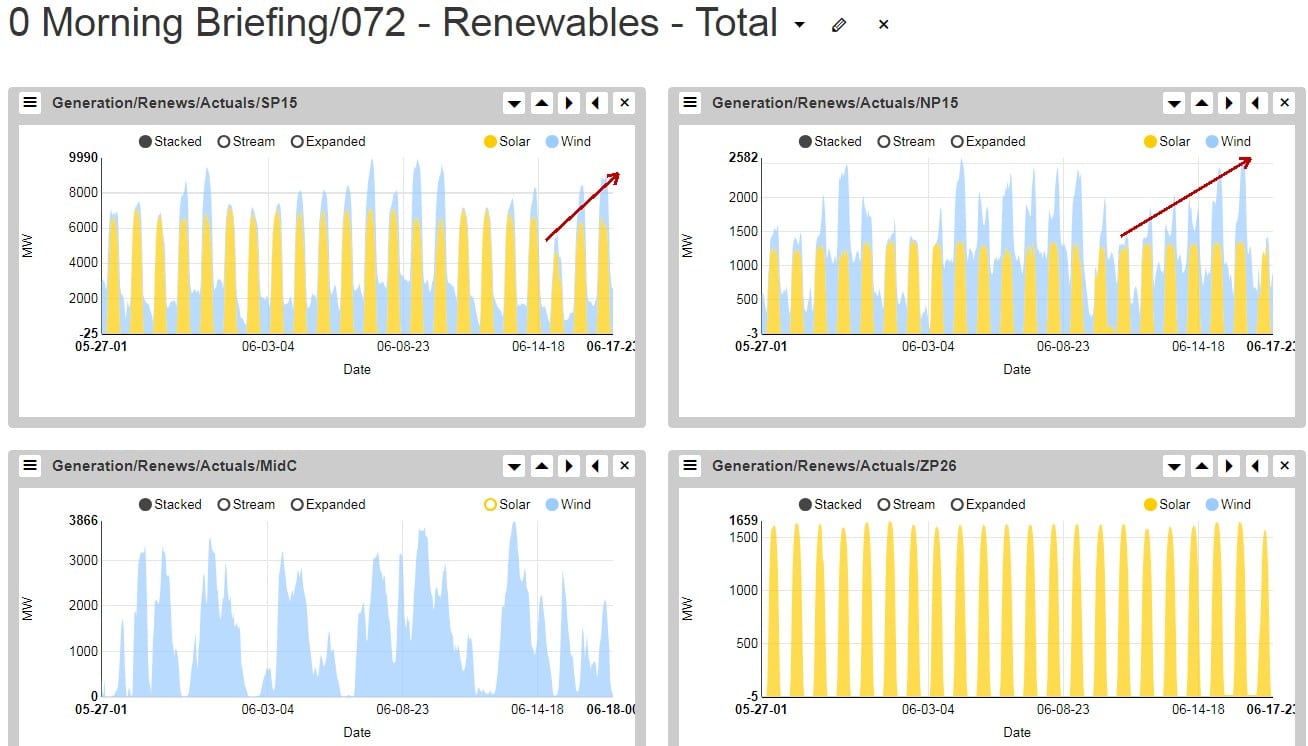 Renewables contributed to the weekend gloom, both SP and NP had strong wind. Not the Northwest, BPA saw its wind gen tank just when it needed the resource.

This volatile resource is quickly fading in relevance, the snow is mostly melted, and river levels are collapsing. Yet there are still more surprises, especially in the NWRFC’s 10-Day. 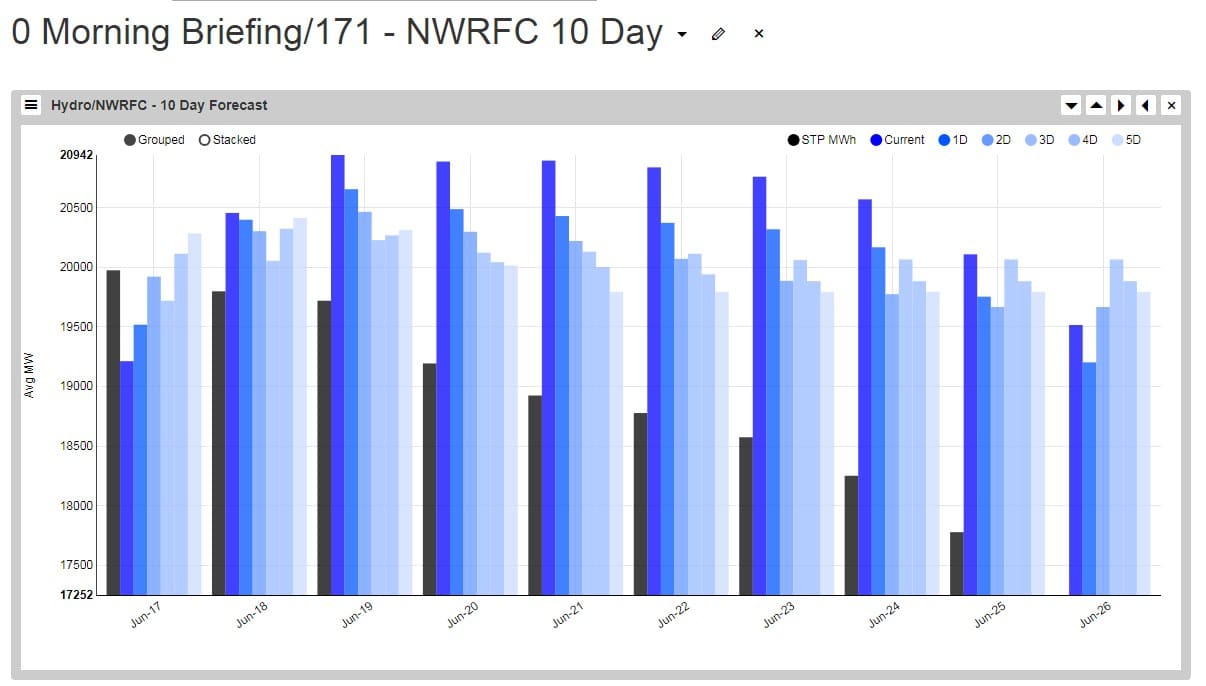 Crazy strong rallies across the 10-Day. But didn’t we just say streamflows are collapsing? Let’s look and see …

Mainstem spill is a good barometer of flows, and those all fell hard over the weekend. How about generation flows? 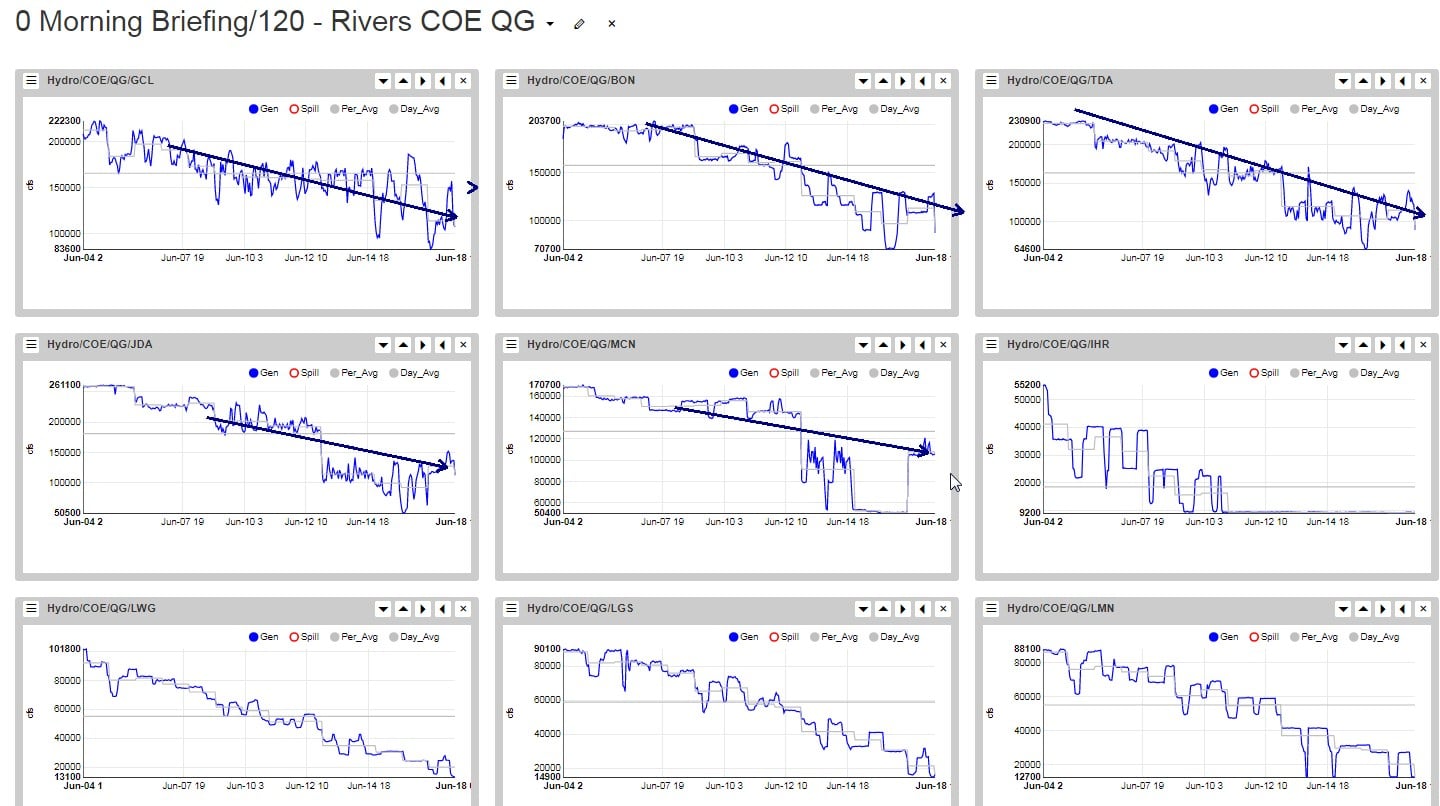 Tanking .. how about Canadian flows? 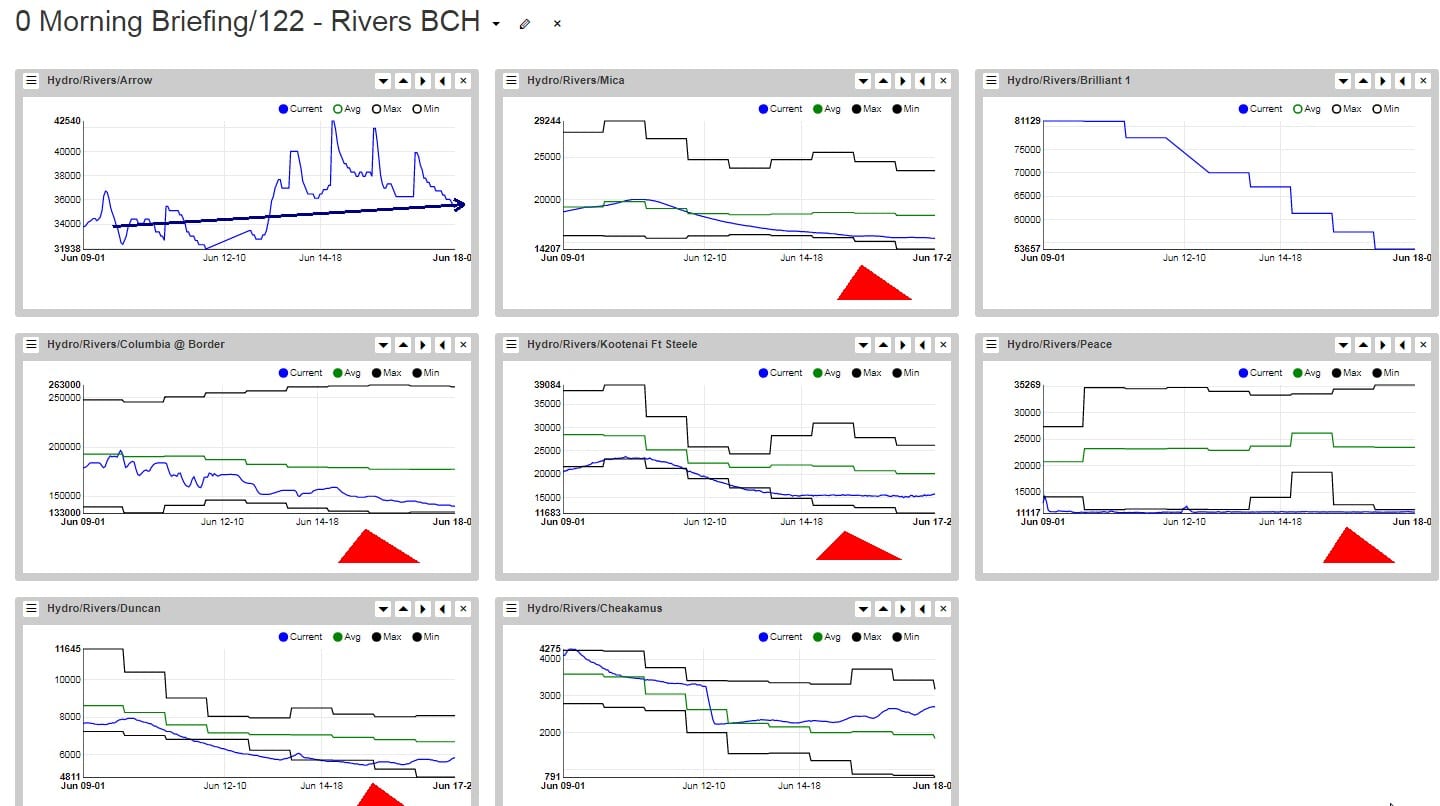 Red Triangles reflect below normal flows – lots of those and most rivers are dropping. So how does the RFC jack its ten-day?

Easy, those changes reflect BPA drafting to serve load. We’d expect another 3000 aMW of demand at MidC by Wednesday and all of that will be served by hydro (the gas is running). That is interesting since BPA will be filling reservoirs at the same time they are drafting reservoirs to serve load. How fun.

Coulee doesn’t have much more to fill, just 5-7 feet in two weeks. It would be more interesting if the pond was at 1270 and not 1283. We may see BPA pull the reservoir down this week if loads are as strong as we suspect. Who knows, maybe they will have a 1270 handle next week? 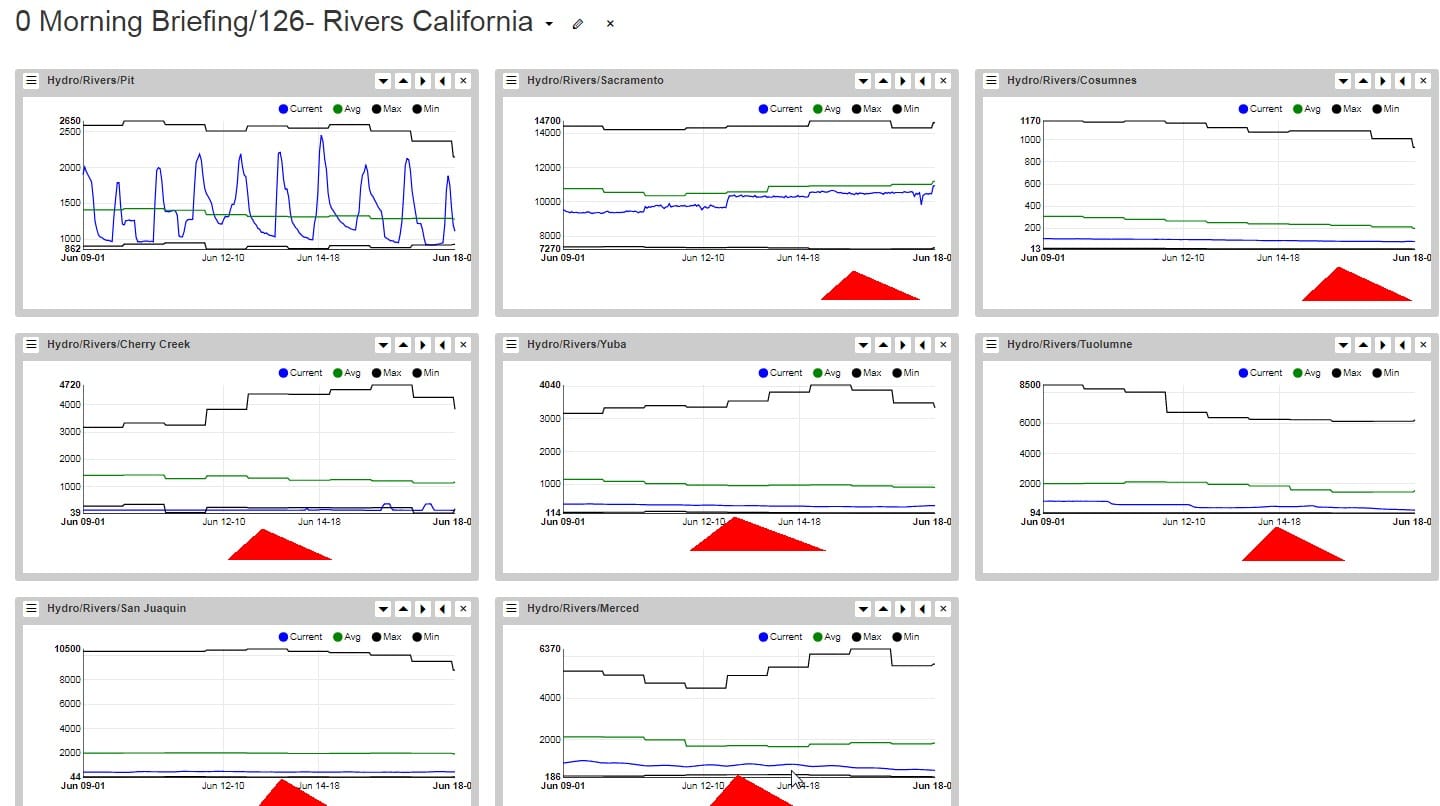 In case you were wondering, the California rivers are just random puddles of muddy water, but what else is new in the Golden State? Fishermen switched from flyrods to snow shovels.

Heads up, the DC is going to zero next week: 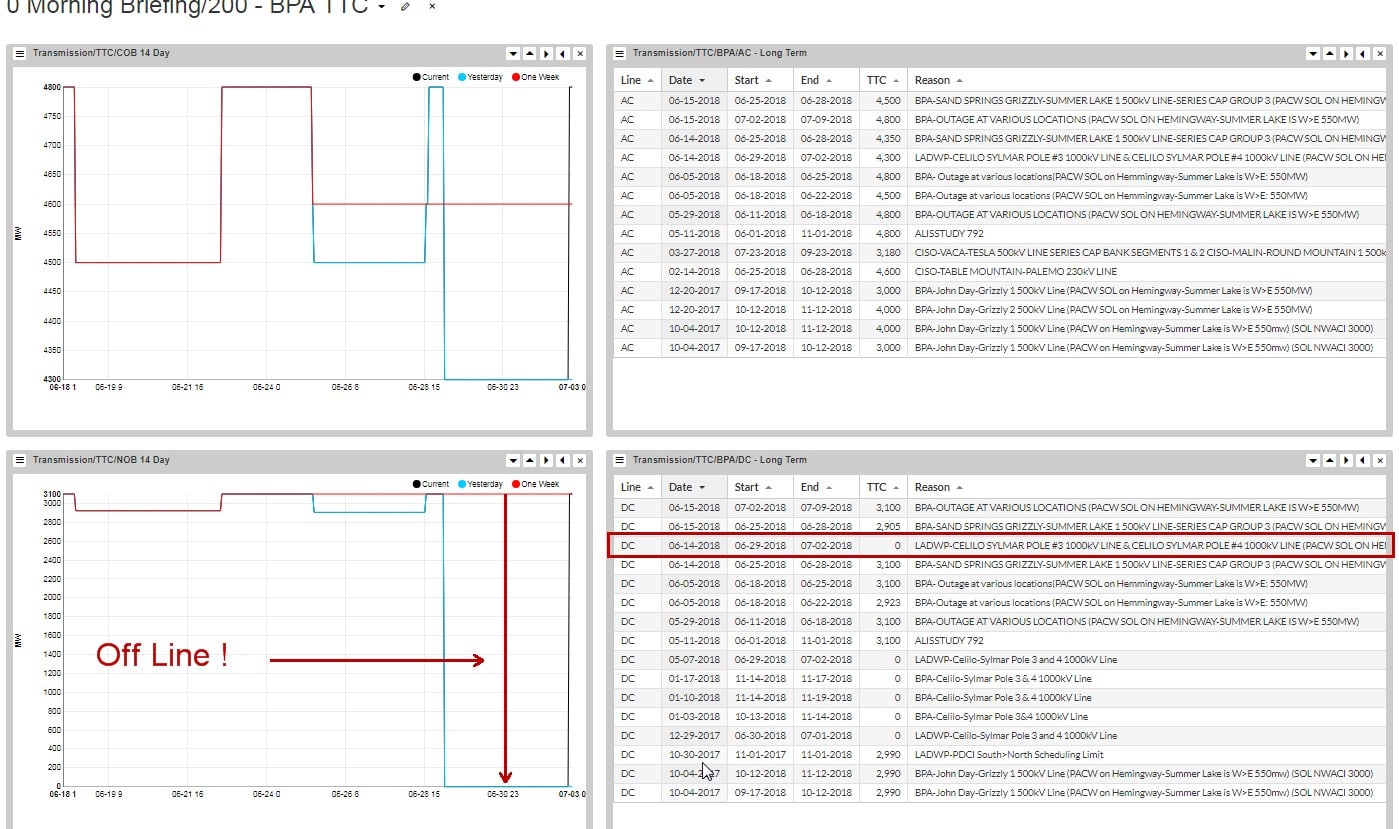 Just for a couple of days, but zero is zero. It seems there is some issue with Pole #3 and #4 that will take three days to resolve. Seems Pole #1 and Pole #2 are just fine.

Strong flow from the Northern Intertie into the Northwest over the weekend. The AC never hit TTC though the DC touched every day.

Bullish everywhere but more at the Mid-C early this week, the rest of the WECC catches up by Wednesday.