Our fundy cash takeaway was bullish south and very bearish north. In this post, I’ll look at some term markets then examine the front-end of the MidC curve. All of the trade ideas were generated from APT-Beta, and all of the charts come from TradeRank – Beta. I’m guessing next week we’ll remove the word “beta” from these, though we’ll keep the old version going another week or so, then drop it.

The following trade ideas were compiled from APT-Beta, filtered on Qs and Cals, sorted on Rank ascending. 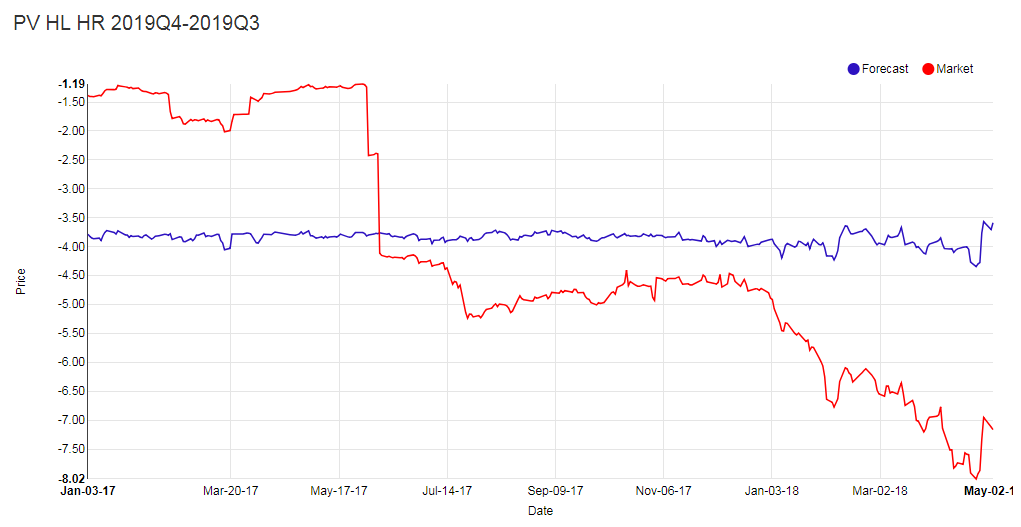 Interesting plot for the PV 2019 HL Q4|Q3; the market has been on a death spiral since March 2017 and just hit bottom and bounced. I think value is our forecast, maybe a bit below that, leaving plenty of room for this to recover. Ultimately, the value will be set by where Q3 2018 liquidates, so, if you’re bearish Q318, this is another way of shorting that. 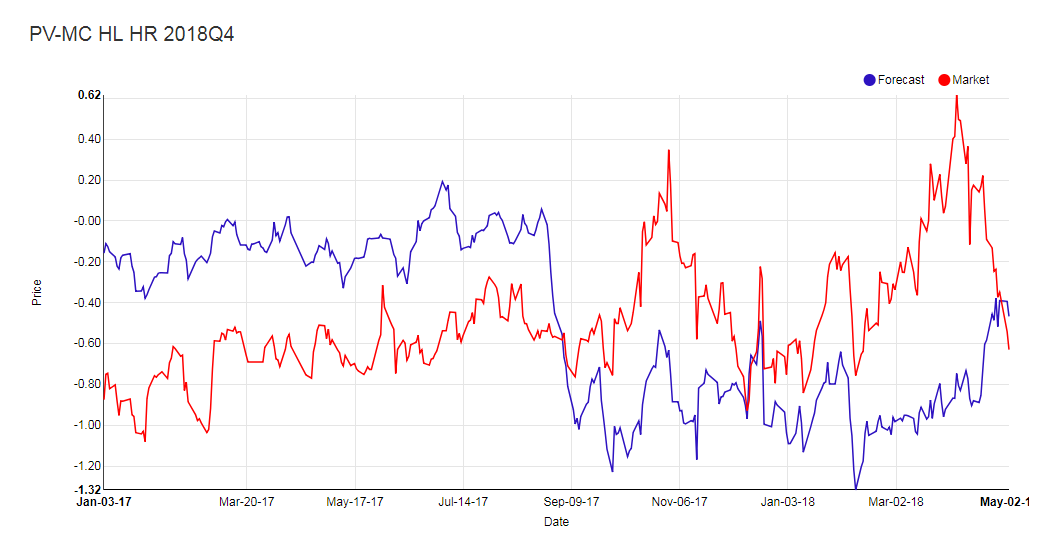 The BETA APT added the spread derivative Palo-MidC, this is the Q4 HL for the spread. Massive selloff and is now below the forecast for the first time since September. We’d buy it off of the expected MidC pain that is coming. 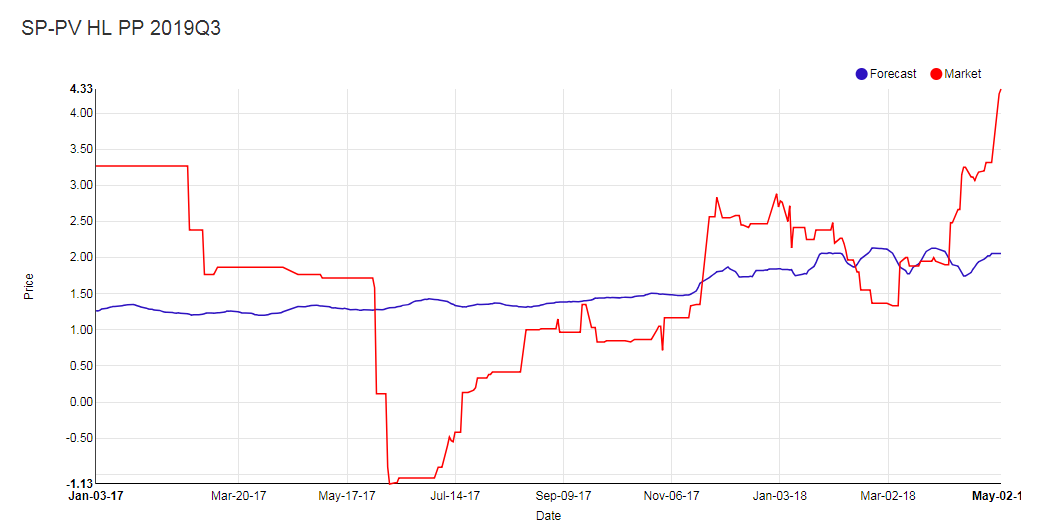 The 2019 spread is breaking out, we’d fade it, as there is no rhyme or reason for it, aside from a complete nat gas meltdown, but even that is bullish for the outside hubs. 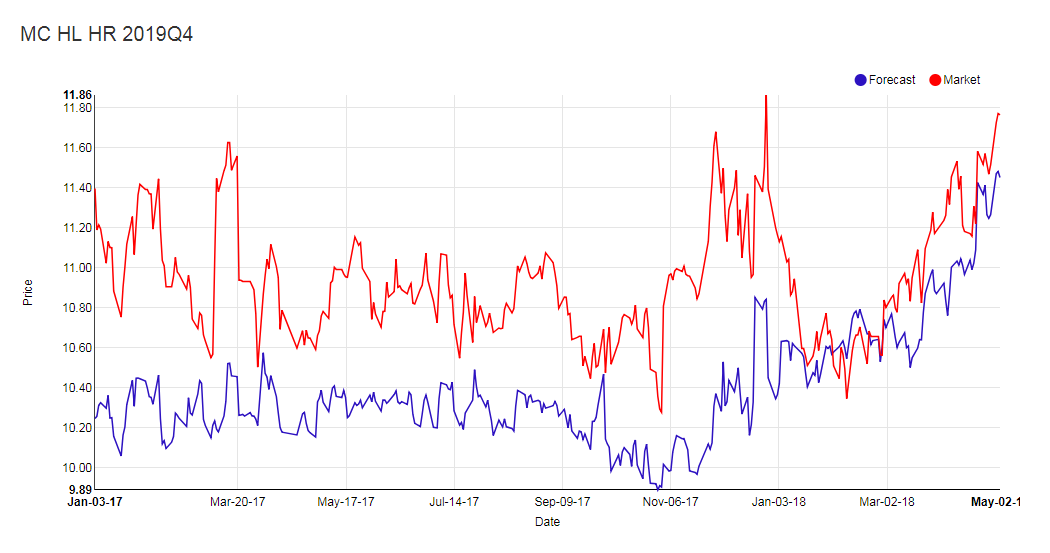 The Q4 has been on a torrid roll since January, now its a bit top-heavy and is an excellent price point for shorting. 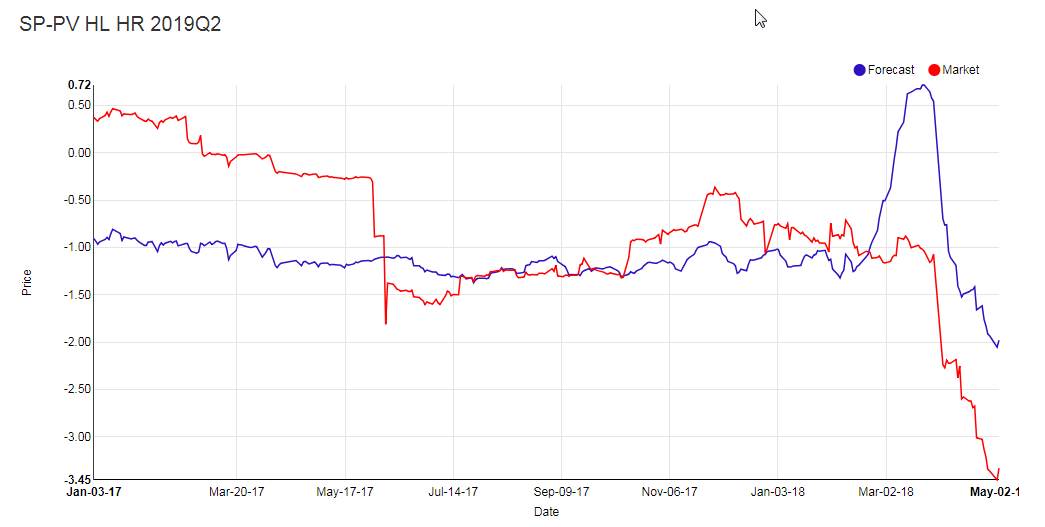 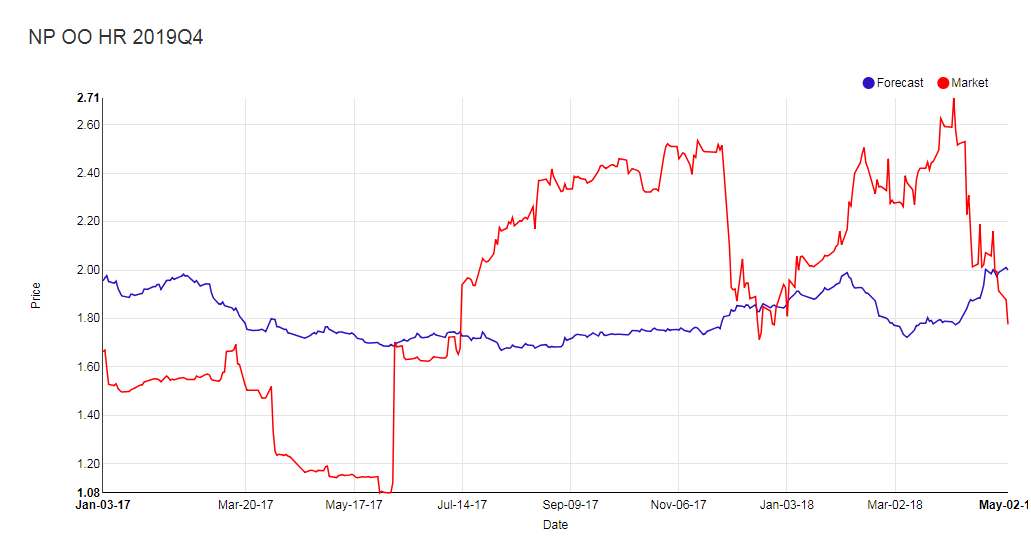 The market hasn’t dropped below our forecast in five months, until now. Last time it touched the forecast it rallied 700 btu. From a price perspective, this is cheap. 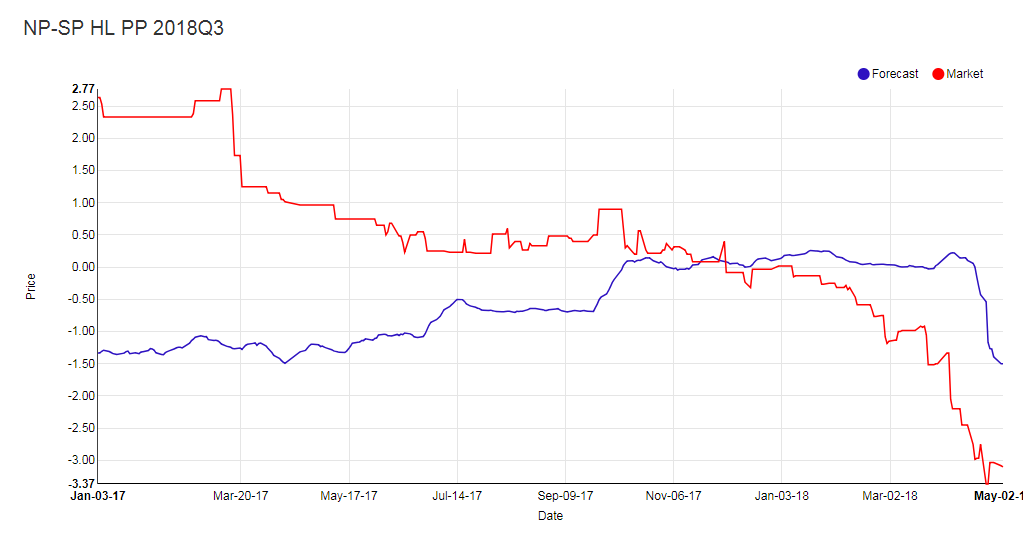 This is cheap, too, the Q3 HL NP-SP. In a wet year it should be cheap, this is not a wet year. If there are gas issues inside SP it is all that much more bullish for NP since SP will look to fill its lines before burning over-priced Citygate natty. 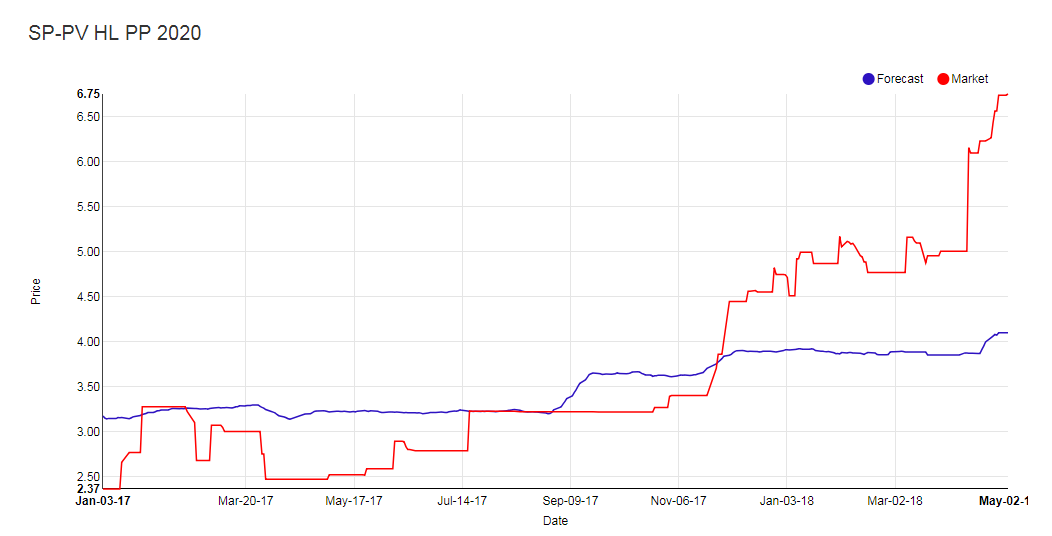 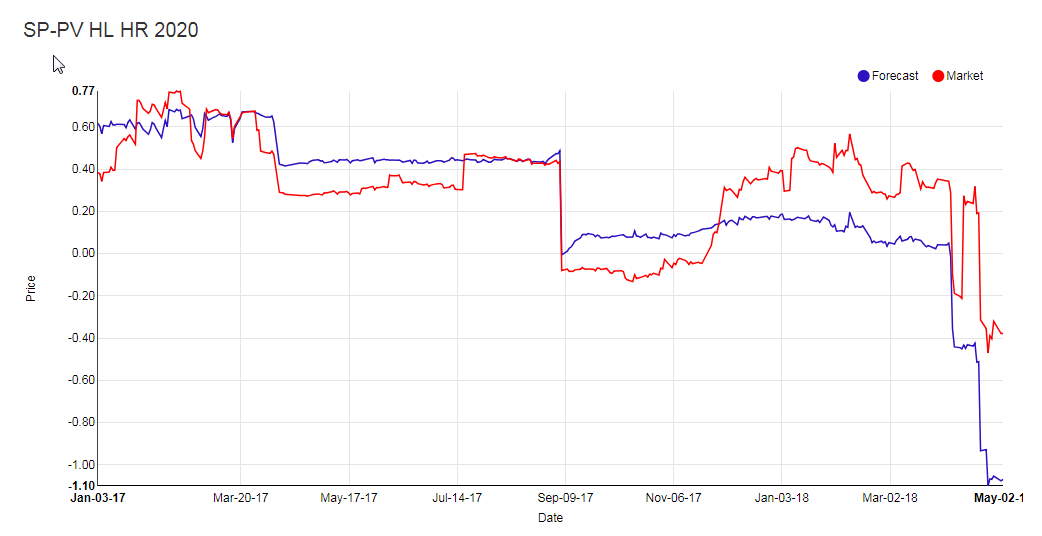 Both charts reflect the same product, top is Power Price, bottom is Heat Rate. All gas driven, but from a heat rate perspective the spread is rich; from a price view, not so much. By the way, the Beta TradeRank includes the calendar year derivatives. 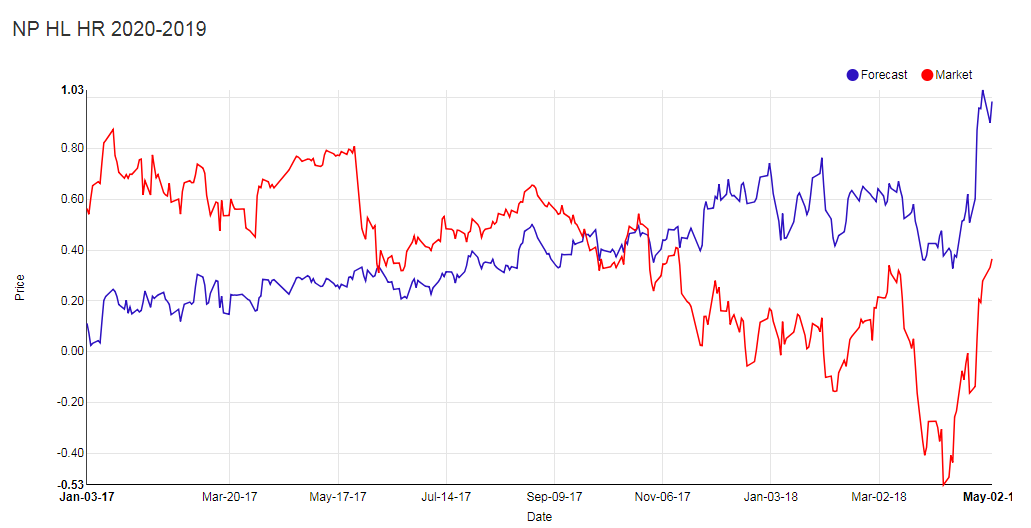 This is a cal roll, and the 20 is on a roll, having rallied almost 1kbtu in a month, but alas, its just back to fair value. 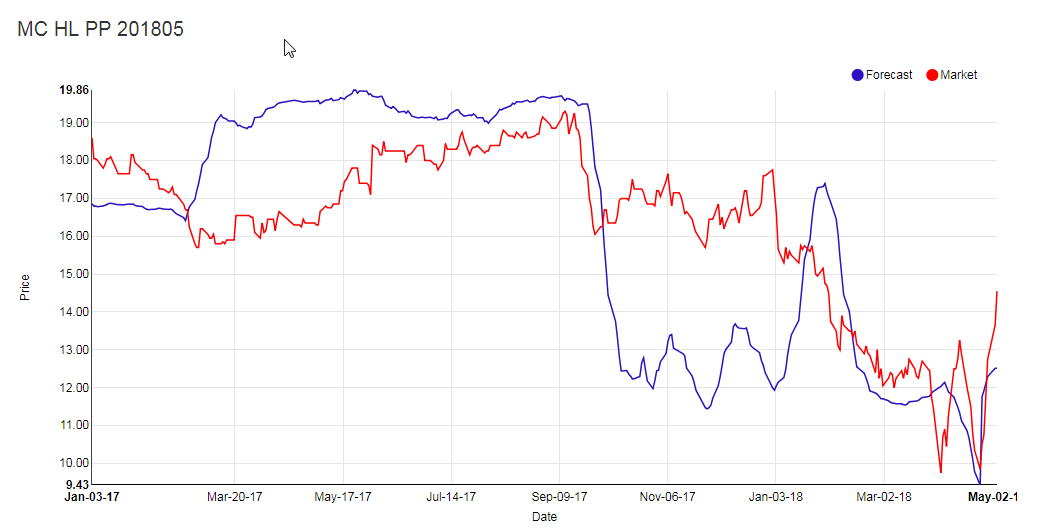 The market loves the bom because cash won’t crash, but cash is about to find itself a whole lot longer in another week. Hang on, or buy, but be prepared to sell once inflows to Coulee rally another 50kcfs. Me – I’d short it here for size. 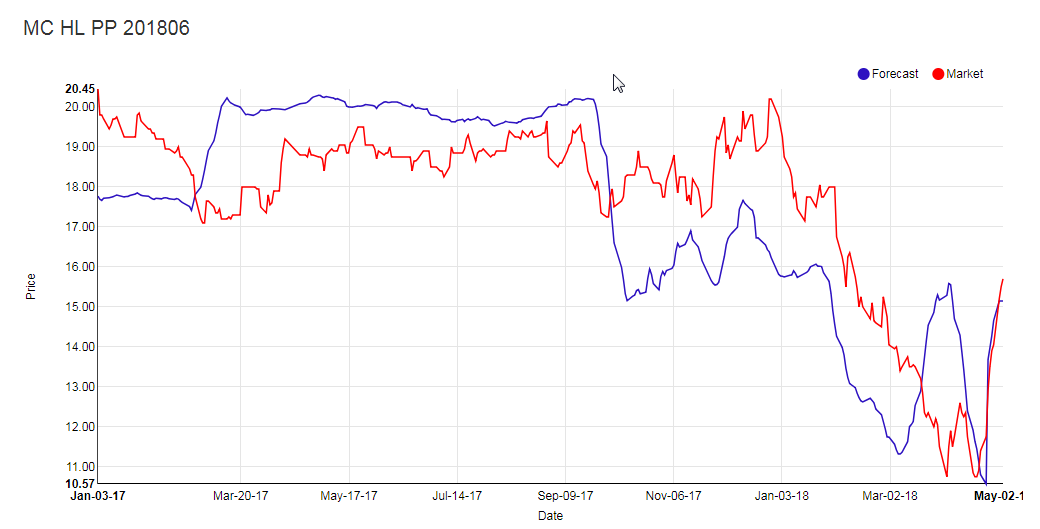 Despite Mr. Market, June is a bust in every runoff scenario. Now that we have hints of a cooldown, it is even more of a bust. Short for Size. 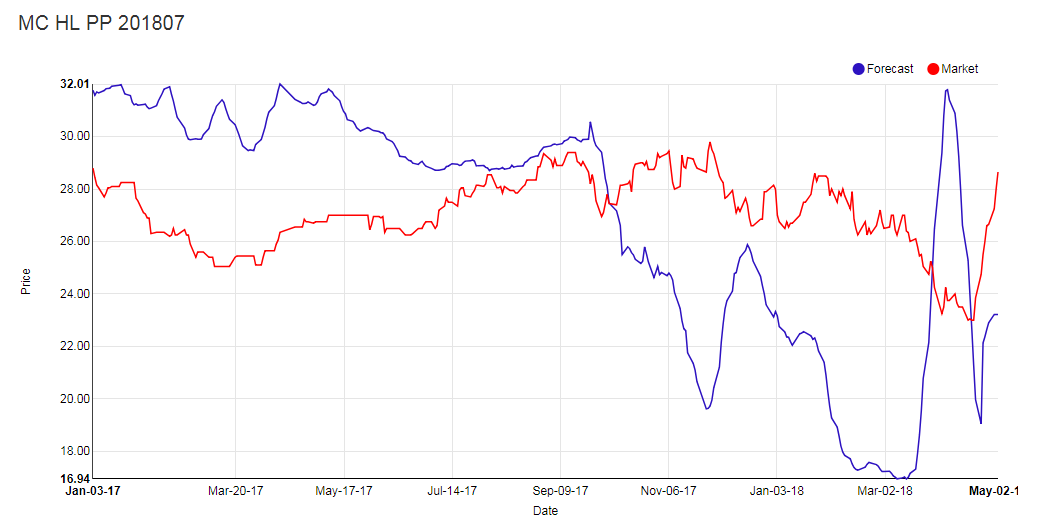 July just rallied back to its January highs, why? Last I looked snow above Coulee was about 200% of normal, even after a few warm days. Am guessing it is still 200% of normal on June 1, despite this week’s heat. Short. 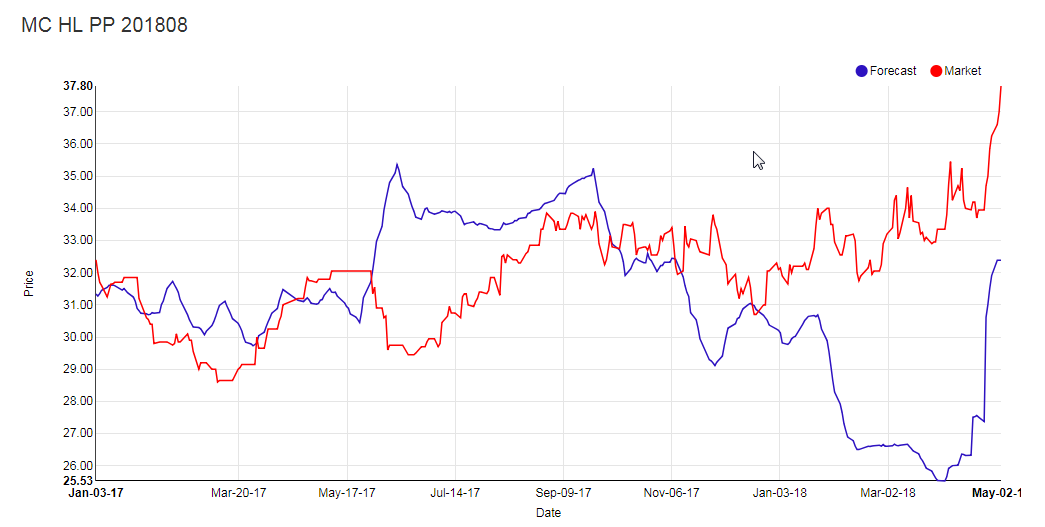 OK, don’t disagree on August moving up, but may differ on how far it has stepped up. If I’m right about the impending cash pain, then all things MidC will share that pain, including August. But, since we’re short everywhere else, we probably shouldn’t be short here too, right? Wrong… Short. 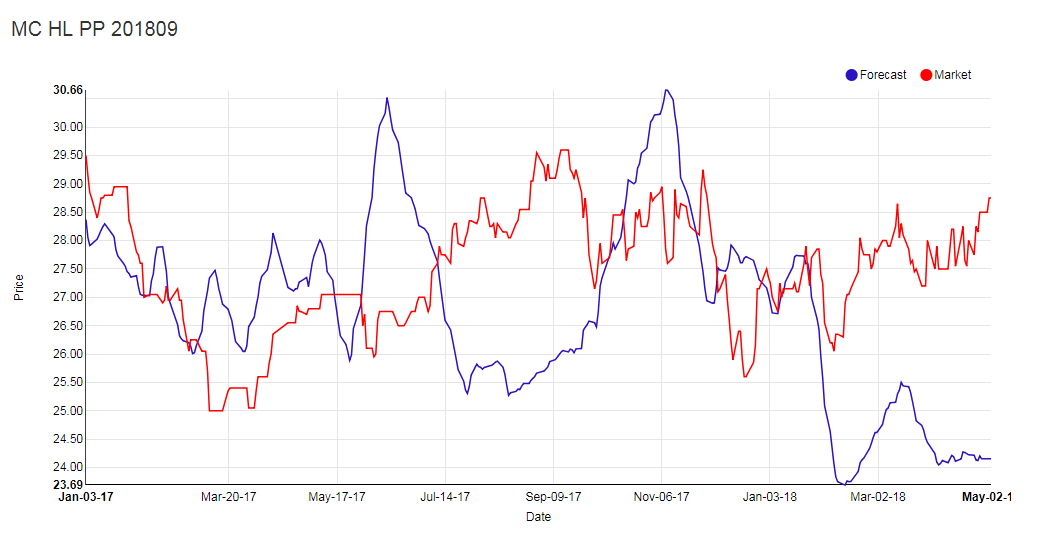 I’d buy this just to hedge out some of those other shorts, but its probably more fair value than over-priced.