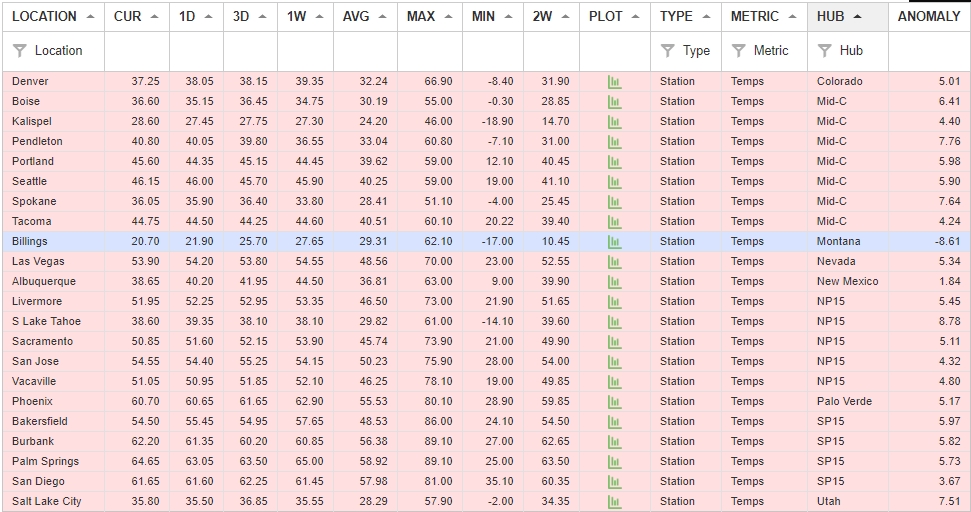 The next 10 days are projecting warmer than normal in terms of daily average temperature, at least in all stations not named Billings.  SP is projecting averages above 5 degrees, while Mid-C gets a similar story though Spokane shows an anomaly above seven degrees. 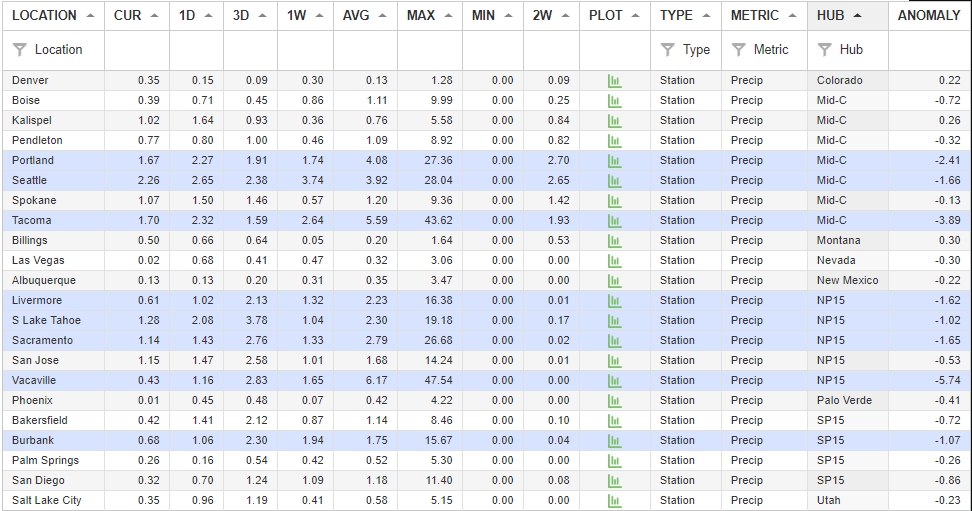 The precipitation is showing up dry, especially in NP as all stations other than San Jose have a precip anomaly greater than one inch (below average). 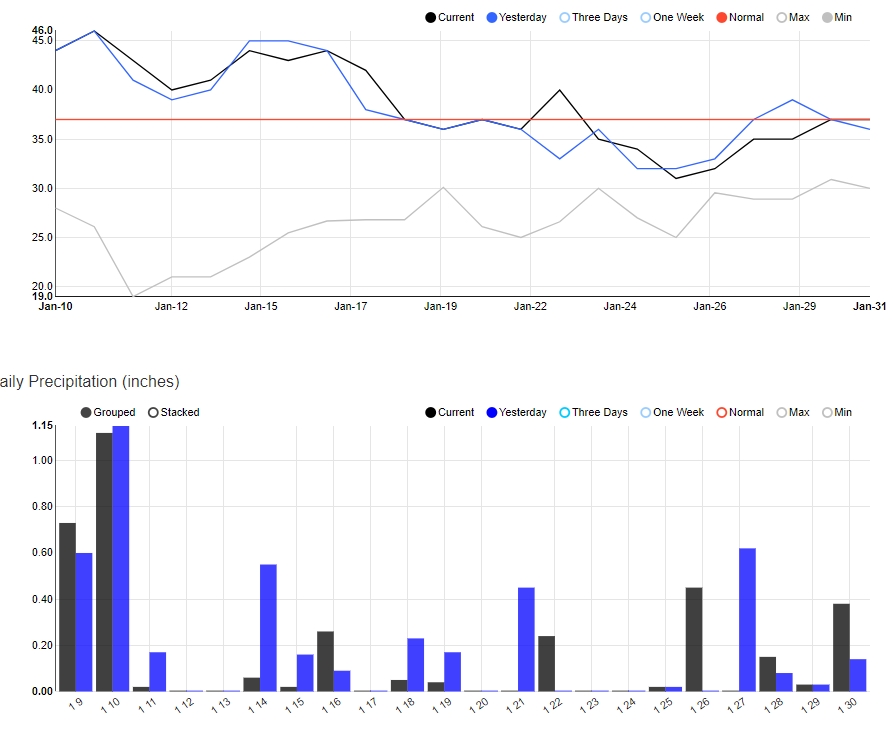 Wet and mild in the Northwest where Seattle is projecting lows to approach 46 on the 11th, nine degrees above normal.  Combine that with nearly two inches of rain spread over the next two days and we could see some heavy runoff in the lower elevations of the Cascades.

If Portland’s projected low of 47 for tomorrow holds true, it will mark an anomaly of 14 degrees above normal, and an increase of three degrees over yesterday’s projection.  Daily lows are forecasted above normal through the 23rd.

Whatever low level snow that’s remaining in Eastern Washington will likely be gone by the end of next week as temps will fall below freezing on just three of the next eight days and peak at 38 on the 17th, 12 degrees above normal.  As with Seattle, a cold front is projected for the end of the month, something worth monitoring as the Northwest sifts through mild weather over the next week and a half.

Burbank looks to climb to an eventual high of 79 by the 13th, placing the day 11 degrees above normal.  The several days following that show a lingering warm spell as most days stay a few degrees above yesterday’s projections.  We’ll keep an eye on potential cooler temps beginning next week.

Similar projections in San Jose where we should expect a monthly high of 68 on the 14th, ten degrees above normal, before an eventual decline below the mean by the 19th.   No records are going to be set this month, but the next week should be consistently warmer than normal.

Potential new 10-year highs in Phoenix beginning on the 13th with a projected high of 78, one degree above the previous 10-year record of 77, and 11 degrees above average.  Highs are forecasted to stay elevated through the 17th.

Las Vegas’ daily lows should stay well above normal from today through the 20th, and peak on the 18th at 46, eight degrees above normal.  Things could take a sharp turn downward thereafter however, as a projected low of 30 is looming on the horizon for the 26th and 27th, both 10 degrees below normal.

While Denver’s minimum daily temps are still relatively cool, they are forecasting above normal through the 18th, reaching as high as 12 degrees above normal on the 16th and 17th.  Temps may cool off by the end of the month, but it’s far enough out to not bank on it. 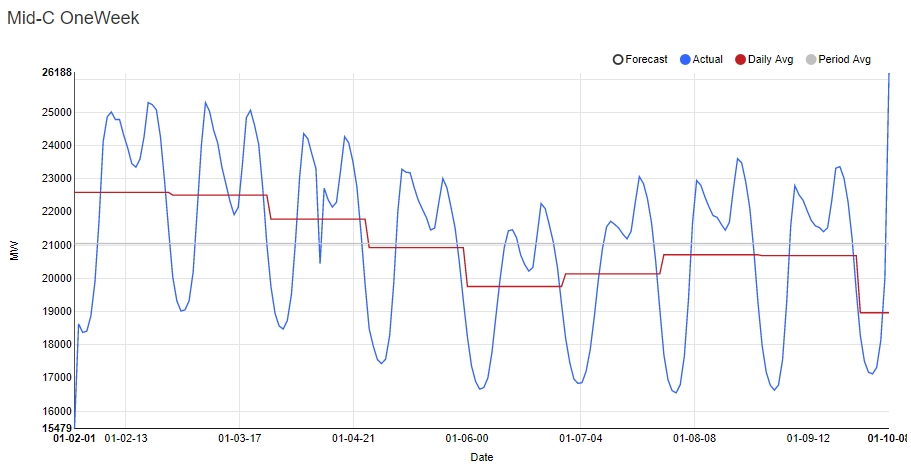 Mid-C demand has fallen just over 1,900 MW in the daily average week-on-week, and 1,930 MW in peak loads.  Day-on-day demand remained basically unchanged however as loads dropped just 30 MW from Monday. 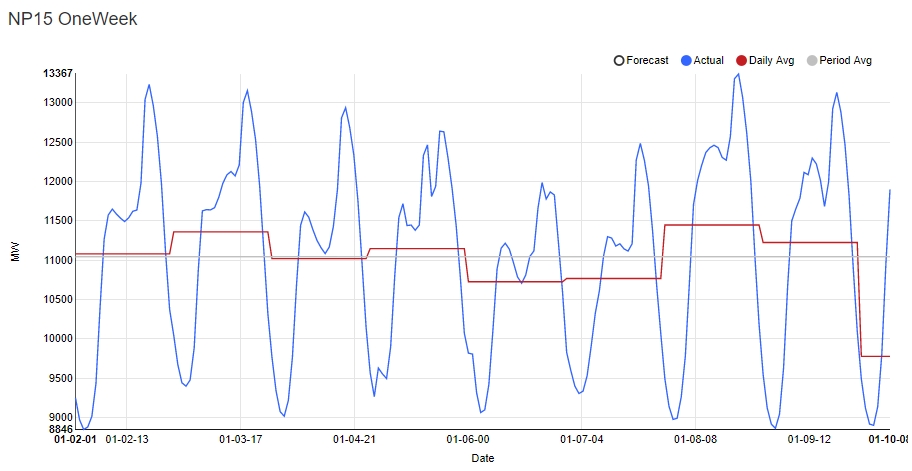 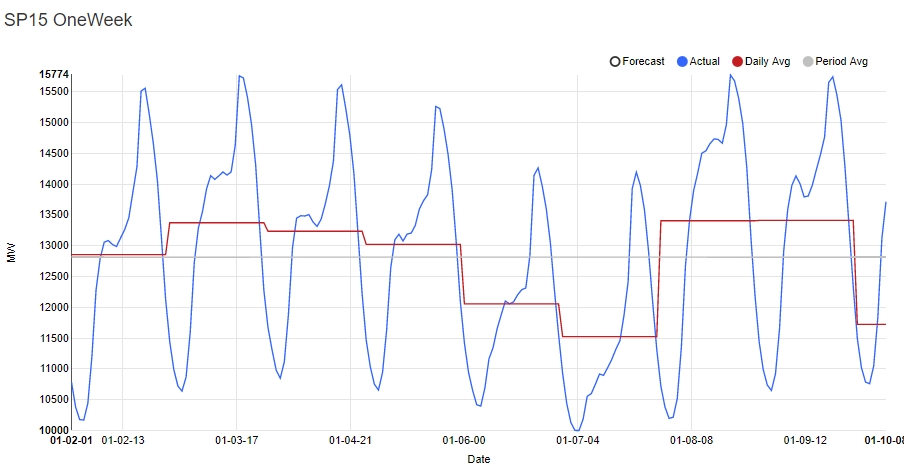 Large increases on the front end where as much as 220 aMW were added above yesterday’s forecast.  Both STP and the 10-Day call for a sharp drop beginning on the 12th. 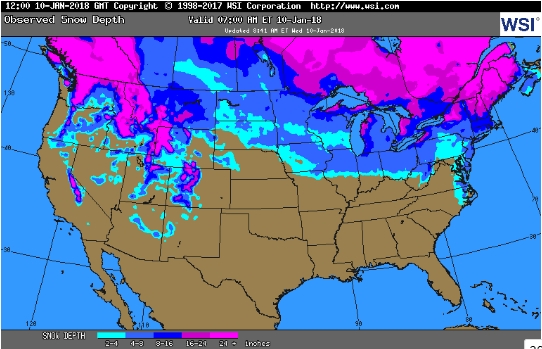 While there isn’t heavy low-level snow in the Northwest, there is enough to cover most of Washington, Idaho, and Montana.  We’ll update this map and watch how the daily lows make their impact on that show cover. 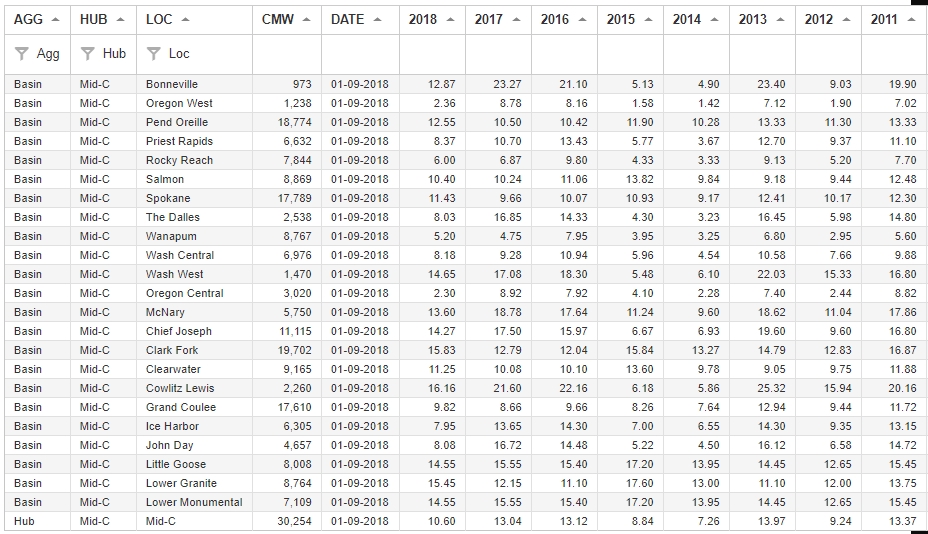 Mid-C has a mixed bag of above and below normal snow depth though many of the Oregon basins show the largest decreases from mean.  Oregon West and Oregon Central report 3.3″ and 4.2″ below average, while The Dalles is 33% from normal.  The larger basins like Pend Oreille and Clark Fork remain above normal for now, but with an extended warm up on the horizon, that may change.

As stated above, Oregon West fall significantly short of average, though remains above ’12, ’14, and ’15.

After falling to a near four-month low on the 3rd, gas outages have steadily climbed up, reaching 5,192 MW yesterday, a 1,100 increase since the low mark.  Hydro stayed flat over the same amount of time, while Solar jumped more than 200%, leading to a total of 453 MW. 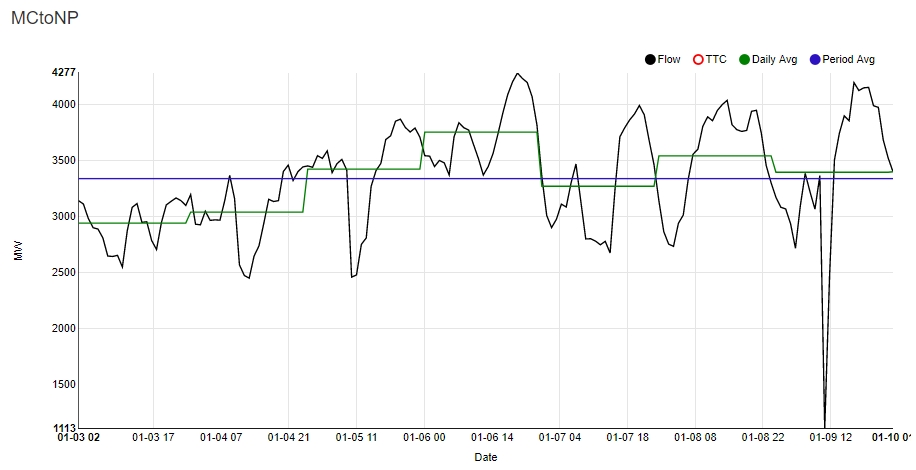 Peak flow reached 4,192 yesterday afternoon, the second highest hour of the week, and 160 MW higher than yesterday’s peak.  Average daily flow decreased 140 MW day-on-day however, in part thanks to a sudden drop in flow at the 11 AM hour. 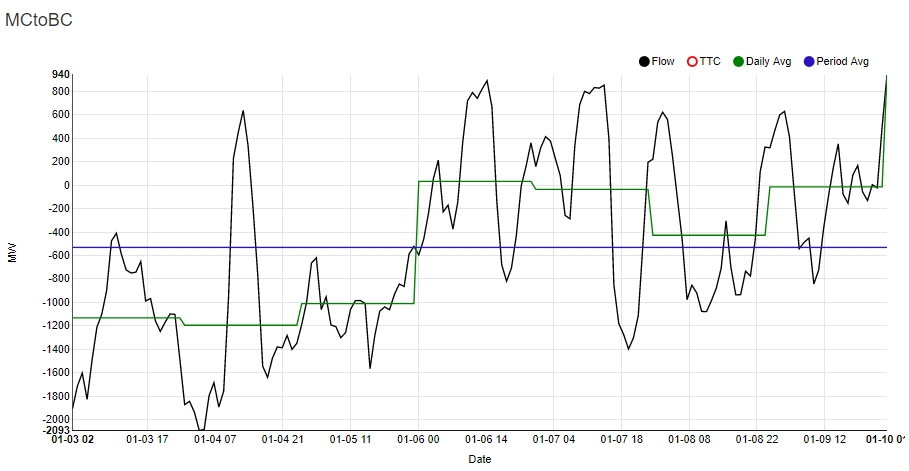 Flow has averaged nearly a neutral position for three of the last four days, with yesterday finishing at -14 MW.  Peak flow hit 630 MW in yesterday’s early morning hours before falling the opposite direction a few hours later at -843 MW.